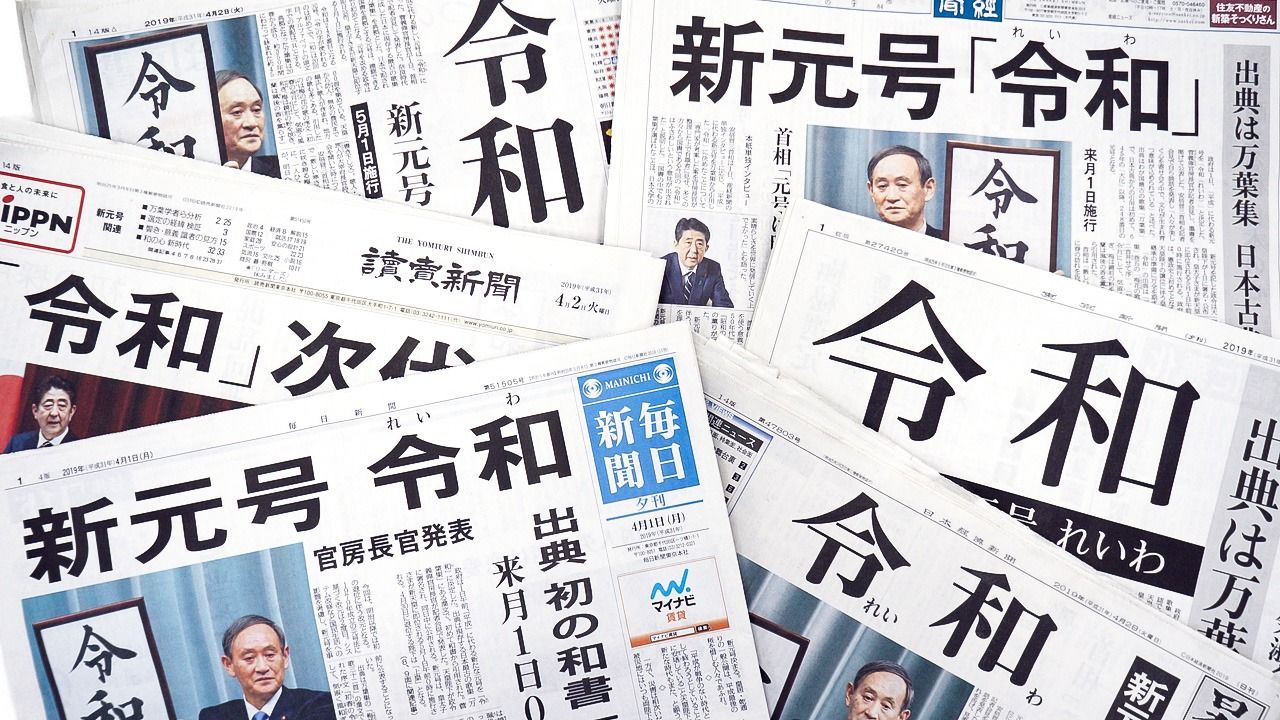 The new Japanese era name has been announced: Reiwa. The term is said to be taken from the Man’yōshū (Collection of Ten Thousand Leaves, 759), Japan’s oldest imperial collection of poetry. Significantly, the two Chinese characters rei 令 (comely, resplendent) and wa 和 (peace, harmony, gentle, Japan) do not appear conjoined in the relevant Man’yōshū passage—a prose introduction to a sequence of 32 waka poems written in kanbun, a form of classical Chinese—but are separated by four characters. Here is the relevant passage:

It was in new spring, in a fair/venerable (rei) month, when the air was clear and the wind a gentle (wa) breeze; plum flowers blossomed a beauty’s charming white as powder before a mirror; and the fragrance of the orchids was like sweet incense. 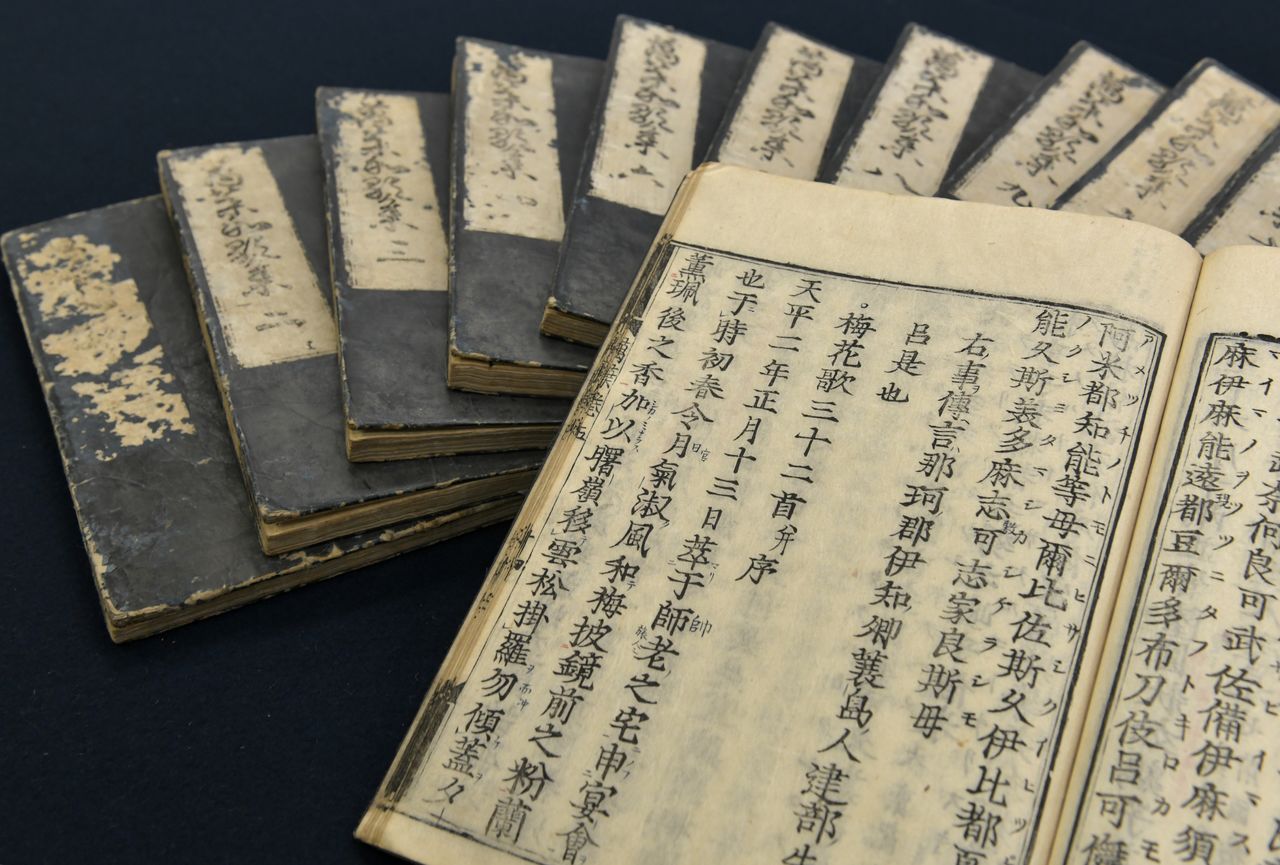 A seventeenth-century printing of the Man'yōshū in the Kokugakuin University Library collection displays the passage that provided the new era name. (© Jiji Photo Press)

Although the term appears briefly in Morohashi’s 13-volume The Great Chinese-Japanese Dictionary, it is so rare and obscure that we can regard Reiwa as a neologism. This word was coined by Nakanishi Susumu, renowned scholar of Japanese classical literature and world’s leading authority on the Man’yōshū. When the NHK announcer disclosed the term’s literary source, my first thought was that Professor Nakanishi must be behind it. And the Japanese government eventually acknowledged that he was indeed behind the new era name, confirming my initial suspicions. It is impossible to speculate on the meaning of the new era name without reading at least some of Professor Nakanishi’s pioneering works.

Reiwa includes the character rei 令, which means, among other things, “ordinance/order” or “command/injunction.” Like most Japanese people, my initial reaction was confusion. After all, the rei is the same rei found in meirei 命令, meaning “command.” Does the term mean, then, as some have suggested, “Japan commands”? Or “obey Yamato”? Or “order and harmony,” as the BBC mistranslated it? Was this a sinister warning to do as we are told, or else?

But the more I thought about it, the more I realized that such interpretations miss the mark. (It’s worth noting that Nakanishi is a pacifist, signatory to an antiwar group that seeks to protect Article 9 of Japan’s pacifist constitution from would-be revisionists—a fact that should put to rest the fear that the term reiwa is a dog-whistle for nationalists and xenophobes.) A few things should be said to rectify misunderstandings about the new era name, explain its literary and linguistic context, and try to clear up the controversy.

Unlike the four previous eras (Meiji, Taishō, Shōwa, and Heisei), no one seems to know for certain exactly what Reiwa means, or is meant to mean. The name is written with two characters: rei 令 and wa 和. Wa, famously, means “peace,” “harmony,” or “Japan,” and carries Confucian overtones. The character rei 令 is more ambiguous, and has caused alarm in some corners, as noted above. It has at least three meaning-clusters. In antiquity, it meant an o-tsuge, a revelation or command from a Shintō deity, and thus something divine or auspicious. Second, it is the traditional prefix attached to something “venerable” or “fine,” as in the fairly common words reijō 令嬢 and reisoku 令息, meaning “someone’s excellent son or daughter.” And thirdly, the character is used in a legalist sense to denote something mandatory or coerced, such as the terms meirei 命令 (command, injunction) and jōrei 条令 (ordinance). Today, this last meaning is the best-known—hence the alarm bells.

In classical literature, the Chinese character 令 usually means resplendent, excellent, beautiful, or comely. This is true in the above-cited passage from the Man’yōshū. One of its readings is uruwashi, a word often written as 麗し, which uses the same Chinese character as the rei in kirei 綺麗, meaning “beautiful” or “pretty.” In short, in classical literature 令 is more or less synonymous with utsukushii (beautiful).

As Professor Nakanishi likes to point out, the root of uruwashi is uru. Long before Chinese characters came to Japan, this two-syllable word carried connotations of moistness, sensuality, sexiness, and youth. As Nakanishi explains in The Japanese Linguistic Landscape: Reflections on Quintessential Words (translated by me, and scheduled for publication this spring):

If you gather up all the closely related terms, you find among them various moisture-related expressions that begin with uru (the root form of ura), such as “wet with moisture” (ururoi ga aru) and “eyes wet with tears” (me mo urumu). It is also common in conversational speech to hear someone say they are so sad that “even their heart is wet with tears” (kokoro mo uruuru).

The Kojiki (Records of Ancient Matters, 711–12 CE), the oldest extant chronicle in Japan, is another possible source for Reiwa, although nobody has pointed this out yet. One of the most famous passages from that chronicle is the phrase “Yamato shi uruwashi” in the following passage:

So, whether we read the character rei 令 in the context of the Man’yōshū or the Kojiki, its uruwashi meaning is the same: lovely, beautiful, comely, resplendent. Hardly a dog whistle for nationalists.

So What Is Reiwa in English?

So what is the best translation for Reiwa, then? In a sense, this is a largely moot question. Nobody ever calls the Meiji period (1868–1912) “bright rule” on account of its characters 明 (bright) and 治 (rule). Nobody calls the Taishō period (1912–1925) “greatly correct” because it is written with 大 (great, big) and 正 (rectified, correct). Or the Tenmei era (1781–89) “heavenly brightness” (天明). Or Tenpyō (729–749) “flat like heaven” (天平). Indeed, the significance of era names only seem to matter once the era has ended and people start assessing the extent to which it lived up to its original name.

Soon after the new era name announcement, the Japanese government issued its own, utterly predictable “official” English translation: “beautiful harmony.” I say “predictable” because the Japanese, ever since novelist Kawabata Yasunari gave his famous Nobel Prize Lecture, “Japan, The Beautiful, and Myself” (“Utsukushii Nihon no watashi”) in 1968, have tended to overuse this word utsukushii, especially when describing their native traditions, language, or culture. In 2006, Prime Minister Abe wrote a bestseller called Toward a Beautiful Country (Utsukushii kuni e) that used this ungainly slogan to stoke national pride in the increasingly overworked and impoverished population. In general, whenever bloviating politicians start congratulating themselves on the “beauty” of their national culture, it is time to run the other way.

To be fair, though, translating the adjective utsukushii presents a particular problem for the literary translator, especially when it appears in titles. My general rule of thumb is to ignore it altogether, or use “comely.” If I had to translate Reiwa, I would probably go with “comely peace.” I suppose any combination of “venerable, resplendent, comely, fine, excellent, exquisite, or lovely” and “harmony, peace, or gentleness” would suffice.

It might be helpful to divide the term’s meaning into two categories, which I call “conscious content” and “unconscious content.” Conscious content is what Prime Minister Abe and the masses think it means. Unconscious content is all the etymological, intertextual, and historical trappings. Language always has both types of content, which are equally important. Where does meaning lie? In the roots and evolution of a word, or in how common folk (mis)understand and (mis)use it? Our stance on Reiwa depends on whether we privilege reader response or literary context.

In any case, to those worried about fascist overtones, I say this: It all depends on what happens in the next 50 years. If Japan and the world end up taking the fascist path, fascist overtones will have been there from the start. If not, the term is innocent.