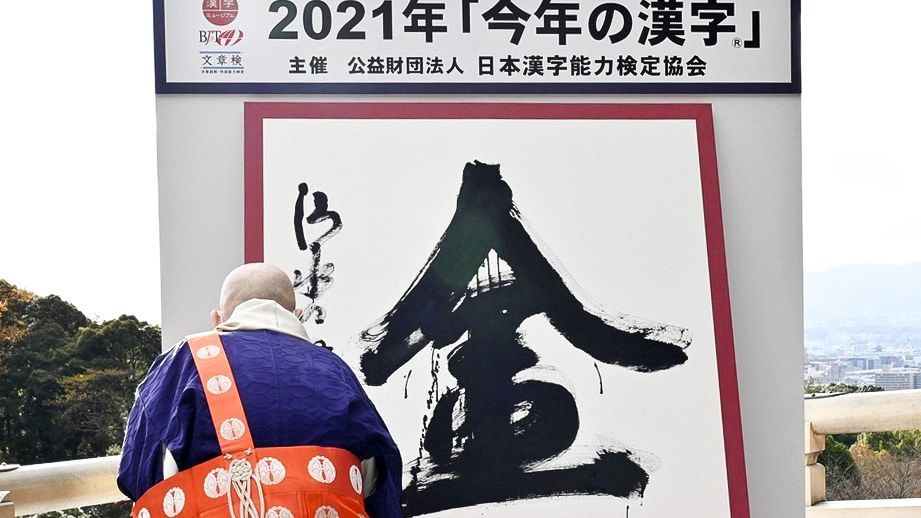 2021 Another “Golden Era” for Kanji of the Year

Society Language Dec 13, 2021
The Tokyo Olympics, postponed a year, proved to be the biggest draw among kanji-watchers, who selected 金 (kin), the “gold” of the coveted medals at this summer’s games. The character came out on top for an unprecedented fourth time, beating out a number of entrants related to the continuing COVID-19 pandemic.

On December 13, the Japan Kanji Aptitude Testing Foundation announced the Kanji of the Year for 2021: the character 金, generally pronounced kin, meaning “gold.” This is the fourth time for the character to come out on top in the voting, following its selection in 2000, 2012, and 2016—all Olympic years, as this year ended up being following the postponement of the Tokyo 2020 games until this summer, indicating the “gold medal” connection many voters made in selecting it once again.

Mori Seihan, head priest at Kyoto’s Kiyomizudera, unveiled this year’s winner with a calligraphic depiction of it performed on the celebrated temple’s wooden observation deck. This was the 81-year-old priest’s fourth time to write this character and twenty-seventh appearance in total for the unveiling, which has taken place annually since 1995, when the inaugural selection was 震 (shin), the “shaking” of the historic earthquake that had struck Kobe at the beginning of that year.

Voting for the kanji that best represents the year takes place via postcard, in person at bookstores and libraries, and on the internet. The winning 金 barely edged out the second-place finisher this year, taking 10,422 votes to the 10,304 received by 輪 (rin), meaning “ring”—another Olympic-inspired choice that was the winner in 2013, the year when Tokyo was tapped to host the 2020 games. The top 10 entries for 2021 are as follows.

The ongoing COVID-19 pandemic inspired several of the choices in the list, including the fourth-place 変 (hen), “change,” part of hen’i-kabu, or the “variants” of the SARS-CoV-2 virus like Delta and Omicron, and 病 (byō), “sickness,” in tenth. The character 家 (ka, ie), meaning “family” or “home,” appeared on many ballots for its connection to the stay-at-home lives we continue to lead to avoid infection.

Making its first-ever appearance in the top 10 was 翔 (shō), chosen by many for being part of the given name of Major League superstar Ohtani Shōhei, who also inspired the winning 2021 Words of the Year. 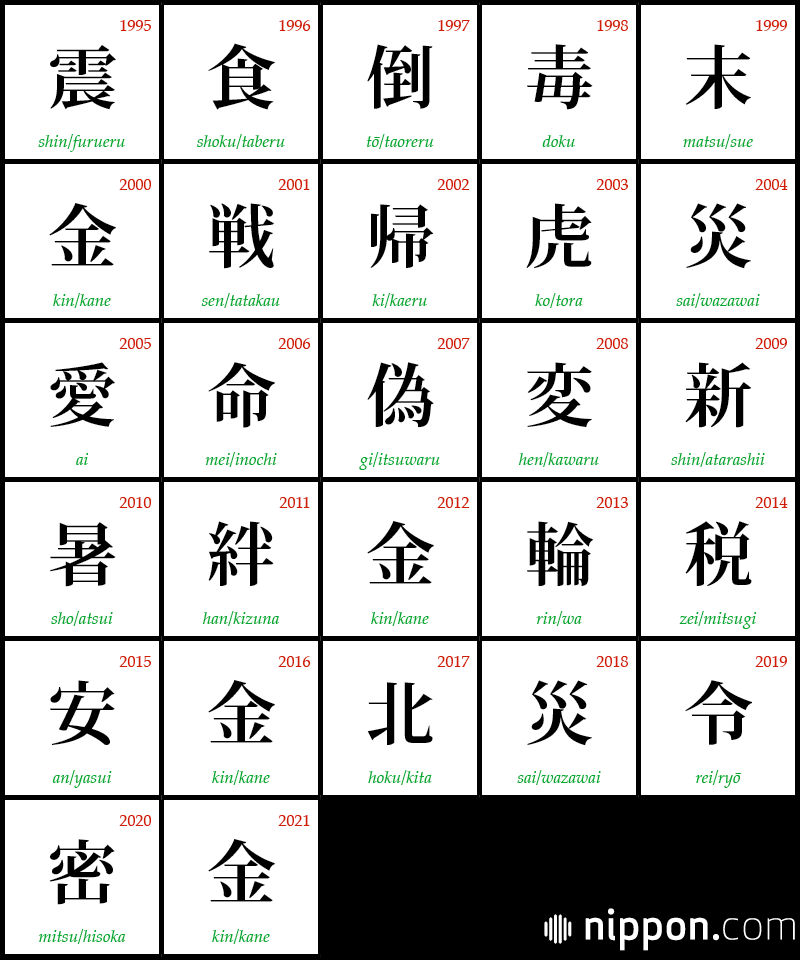 (Originally written in English. Banner photo: Mori Seihan produces calligraphy for 金, the Kanji of the Year for 2021, on December 13 at Kyoto’s Kiyomizudera. © Kyōdō.)