At the Mercy of the System: Criminal Justice and Capital Punishment in Japan

INTERVIEWER  Japan has been criticized for holding suspects for long periods, a practice some call “hostage justice.” Is this an apt description?

MURAOKA KEIICHI  It’s a common practice to arrest people and keep them in custody for long stretches in a bid to get them to confess. Critics have described it as ”hostage justice” since authorities essentially hold a suspect’s freedom for ransom, with the price of release being an admission of guilt.

It’s a deeply entrenched aspect of the criminal justice system, but there are signs that the situation is changing. Defense attorneys are starting to fight harder to get their clients released, and judges are beginning to show less inclination to rubber stamp requests from the prosecution to keep defendants in custody. However, change is slow and courts still grant detention requests in most cases.

Created by Nippon.com based on the 2017 White Paper on Attorneys published by the Japan Federation of Bar Associations.

MURAI TOSHIKUNI  The law clearly states that a person can’t be imprisoned unless found guilty of a crime. However, authorities are able to arrest a suspect and hold them for up to twenty-three days for questioning without formally filing charges. This is a long time, but the problem is that under Japan’s criminal justice system prosecutors can restart the clock over and over by tacking on additional charges. Sadly, such lengthy pretrial detentions are the norm. They are a serious breach of civil liberties, amounting to punitive incarceration without proof of guilt.

Police and prosecutors like to argue that there is a risk a suspect will tamper with evidence when requesting to remand a prisoner. This is quite dubious, though, since Japan’s Code of Criminal Procedure specifically states there must be clear and probable cause that a suspect may conceal or destroy evidence if freed, not merely the “possibility” of it.

MURAOKA  In principle, suspects in criminal cases are presumed innocent until proven guilty. The burden of proof rests clearly with the prosecution, but the readiness of authorities to keep a person in custody and the willingness of the court to sign off on detention requests gives the strong impression that the state assumes a suspect to be guilty from the start.

MURAI  The concept of presumed innocence can be tricky enough for laymen to understand. However, the real problem is that many judges wholly disregard the legal principle. They fail to give a suspect the benefit of the doubt, relying instead on the misguided belief that they only need to review the written indictment to determine a person’s guilt. Such instances of implicit bias are all too common.

MURAOKA  The situation in Japan is better compared to countries where authorities can arbitrarily jail citizens. Police must first obtain a warrant before detaining a suspect, and only a third of cases ever result in a suspect being taken into custody. The problem is that once the police have suspects in custody, they are loath to release them.

INTERVIEWER  In Japan it can be hard for suspects to make bail without making a signed confession. What pressure is put on detainees while they are held?

MURAI  While in custody, it is vital that a suspect be allowed to speak freely and in private with a lawyer. This is a legally guaranteed right. But in reality, authorities tightly control access to prisoners to the point that detainees can find it difficult to even exchange letters with legal counsel. This isolation makes it extremely hard for an individual to fight the charges.

MURAOKA  There’s a persistent belief that if a person admits to a crime he must be guilty, but this is not the case. Living condition inside jail are tough enough, but add in relentless grilling by prosecutors and even the toughest person will eventually break. If the courts grant a request for detention, a suspect can wind up spending weeks in lockup under harsh conditions without formally being charged. Such long periods of incarceration are why we end up with forced confessions. Legal professionals overseas are right to strongly criticize Japan for this practice.

INTERVIEWER  Japan has long relied on the daiyō kangoku, or “substitute prison,” system, whereby suspects are held for extended periods in police jail cells while awaiting trial instead of in a facility run by the Ministry of Justice, as stipulated by law. How do you view this situation with regard to Japan’s reputation for forced confessions?

MURAI  Some issues that have come under international scrutiny, like conditions inside jail cells and access to legal counsel, are gradually improving. This has led some legal experts to tacitly accept the daiyō kangoku system, but reforms have merely addressed the operation of detention centers and not the real problem of long-term detention.

MURAOKA  Defense lawyers carry some of the blame for not being more concerned about the plight of their clients. They seem indifferent to the harsh conditions as long as suspects are fed and cared for. However, critics overseas have pointed out the injustice of a system that forces detainees to remain in the custody of the same authorities prosecuting them. It’s a situation that breeds false convictions.

INTERVIEWER  What aspects of the legal system lead to miscarriages of justice?

MURAI  One fundamental issue is that very few attorneys consider it worth their while to specialize in criminal defense. A major deterrent, particularly for individuals just entering the legal field, is the low renumeration. To illustrate, all the false-conviction cases I’ve worked on I did pro bono. Only a handful of lawyers have the level of commitment necessary to put financial concerns aside and take up the cause of a person who they feel was wrongly accused.

MURAOKA  There are a number ways wrongful convictions occur in Japan, but forced confessions are at the top of the list. There have been four prominent capital punishment cases where defendants were exonerated in retrials after it was proved that they were pressured to give a guilty plea while in custody. As technology improves, questions about the accuracy of earlier DNA testing and other forensic evidence is also being used as grounds for granting retrials.

However, a serious issue is that even if a judge orders a new trial, prosecutors are able to prevent a defendant from having the case heard by appealing the decision, and in some instances even convincing a higher court to reverse the judgement. Many legal experts have criticized this practice for subverting the authority of the bench and obstructing the legal rights of a person to a fair trial.

I strongly disagree with the practice. Courts don’t overturn earlier judgements on a whim, and I believe if a judge suspects there was a failure of justice and grants a retrial, the ruling must be respected so that justice can be served.

INTERVIEWER  Retrials are a necessary part of the legal system and protect innocent people from being wrongfully punished. However, many experts see Japan as being overly cautious about reopening cases.

MURAI  I’m afraid that most Japanese citizens don’t see it that way. I would wager that a significant slice of the population is displeased when they hear about a person being exonerated; as if they had duped the system and gotten away scot-free. Some of my legal colleagues even feel this way. The fact that so many people find it hard to accept that false convictions occur illustrates a fundamental ignorance about the legal function that retrials serve.

MURAOKA  The situation is exacerbated by judges who have unwavering faith in the infallibility of the bench. Once a decision has been passed down, it is exceedingly difficult for defendants to convince the court to grant a retrial. Unless new facts come to light that irrefutably raise a reasonable doubt, judges typically fall back on earlier evidence to decide whether to allow a new trial. Part of the bench’s reluctance can be attributed to Japan’s 99.9 percent conviction rate, which makes judges warry of pointing out potential mistakes by the prosecution.

What is really surprising is that in all the cases of convictions being overturned, not a single police officer, prosecutor, or judge involved has come forward to apologize for sending an innocent person to jail. There is a deeply engrained tendency to refuse to admit fault, even in the face of obvious misjustice.

Issues with the Death Penalty

INTERVIEWER  What is the current state of capital punishment in Japan?

MURAI  The death penalty has broad public support, with around 80 percent of citizens backing the practice. However, I would say that much of this approval is passive and doesn’t reflect a deep understanding of the system.

One incident that should give people pause is the Iizuka case. Kuma Michitoshi was arrested for the 1992 abduction and murder of two elementary school girls in the city of Iizuka in Fukuoka Prefecture. He maintained his innocence throughout his trial, but was found guilty based on circumstantial evidence and DNA testing and was sentenced to death. He appealed the ruling without success and was executed in 2008. Kuma’s widow filed for a retrial in 2009 after a ruling in another high-profile case threw the accuracy of the DNA and blood tests used to convict Kuma into question, but Fukuoka courts have repeatedly rejected the request. She has since appealed to the Supreme Court and a decision is pending.

If a retrial exonerates Kuma, the state will have blood on its hands. There really is no place in the criminal justice system for a punishment with such irrevocable consequences if a person is wrongly convicted.

Abolishing capital punishment would certainly deter the small number of offenders who commit heinous crimes with the intent of receiving the death penalty. The state would be freed from helping such people carry out their suicidal wishes, and there would be no victims or grieving families. 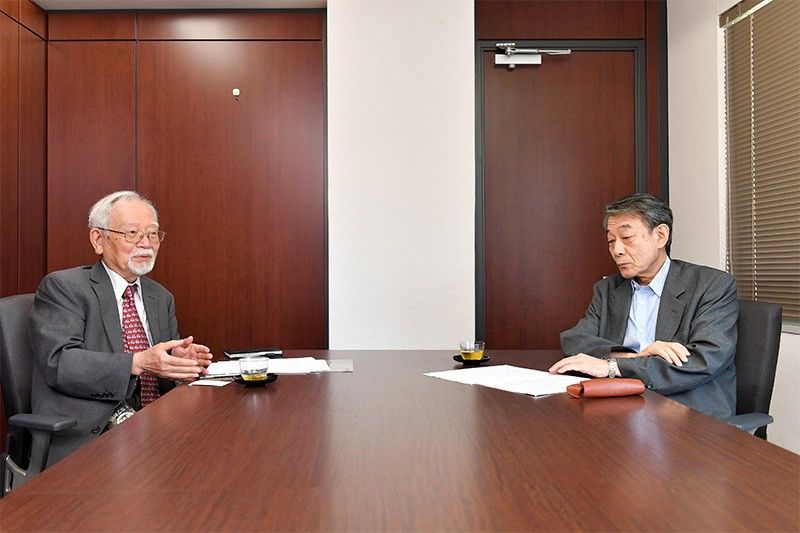 A Cavalier Approach to Capital Punishment

MURAOKA Japan has come under scrutiny as one of the few advanced nations that retains capital punishment. A number of foreign NGOs dedicated to abolishing the death penalty plan to run a campaign in Japan in 2020, the same year Tokyo will host the Olympic and Paralympic Games, to pressure the government to end the practice. Their thinking is that if Japan were to stop executions, it would persuade other countries with capital punishment to do the same.

With such broad public support for the death penalty, though, the groups will be swimming against the tide. However, there is no denying that Japan needs to have a conversation about capital punishment, and legal organizations like the Japan Federation of Bar Associations must step forward and lead public education efforts.

MURAI  In the United States, trials where the death sentence is being sought are typically thorough affairs. Prosecutors spend an immense amount of time and money collecting evidence and refining their case as the burden of proof, and consequences, are far greater than in other criminal trials. At the same time, there are measures in place that assure the defense an equal say and prevent the accused from being railroaded. In short, the system provides sufficient human and financial resources to the defense side as well.

By comparison, Japan’s legal system is overly blithe about capital punishment. Authorities need to bolster procedures on every level to ensure that the process is just and that innocent people aren’t sent to the gallows. This includes assuring that defense lawyers in capital punishment trials are adequately compensated for their work, instead of relying on attorneys who are willing to argue cases for free or very little pay.

(Originally published in Japanese based on an interview by Takahashi Yuki of Power News. Interview photos by Igasaki Shinobu. Banner photo: Nepalese citizen Govinda Prasad Mainali waves from the balcony of his house in June 2012 after returning home following 15 years in prison in Japan for murder. He was cleared of the crime after DNA evidence presented at his retrial proved he was not the culprit. © Jiji.)