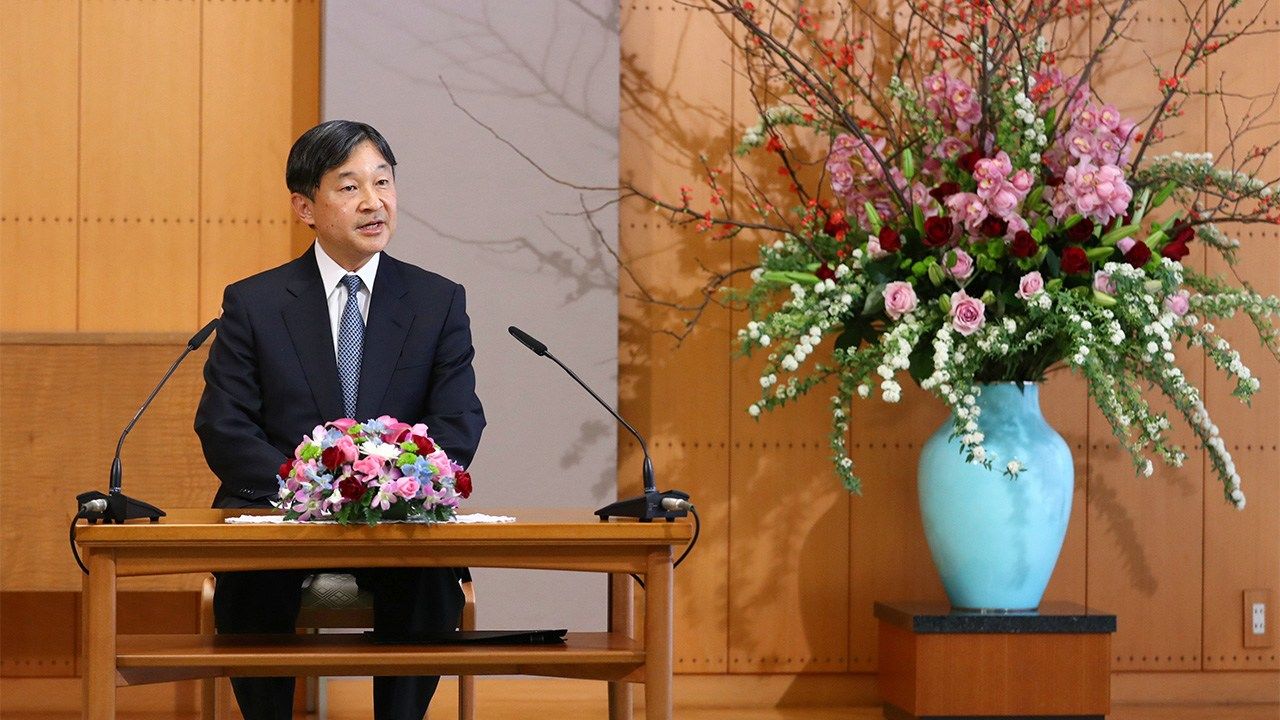 Crown Prince Naruhito: One Step from the Imperial Throne

Society Apr 8, 2019
In a February 2019 speech, shortly before his fifty-ninth birthday, Crown Prince Naruhito looked back on his life to date and ahead to his forthcoming role as emperor of Japan.

The Changing Role of the Imperial Family

Crown Prince Naruhito was destined to become emperor of Japan from the day he was born. He was 28 in 1989, when his grandfather Emperor Shōwa (Hirohito) died and his father took the throne. Emperor Akihito’s announcement in the summer of 2016 that he wished to abdicate brought Naruhito’s ascension to the throne suddenly much closer.

Shortly before his fifty-ninth birthday on February 23, 2019, Naruhito gave a press conference in which he tackled many questions to do with his life to date and forthcoming role as emperor. “I feel very solemn when I think about the future,” he spoke frankly. He said what he had learned from his parents and their approach to their duties would be an important guide. At the same time, “Just as new winds blow in every age, the role of the imperial family changes. I would like to firmly carry forward traditions that have been passed down since ancient times, while also pursuing the ideal role that the imperial family should take in the future.”

He showed his concern regarding some issues. “It is a fact that the proportion of male members of the imperial family is decreasing and all of the members are growing older. Given also that female imperial family members must leave the imperial family upon marriage, these issues relate to its future role.” He did not comment, however, on what that role should be, or the doubts expressed in a statement by his younger brother Fumihito, Prince Akishino—the next crown prince—over spending public money on the large-scale Daijōsai festival later in the year. It was typically prudent of him to refrain from touching on political matters.

He also spoke of his wife. Crown Princess Masako’s health problems have led to her absence at past ceremonies. “While continuing to take care of her health over the past year, Masako has continued making efforts and finding ways to discharge her public and private duties to the best of her ability. This has allowed her to gradually broaden the scope of her activities, and both Masako and I are pleased about this expanded range. While she will have many public duties as empress, I do not expect her to take them all on overnight.” In this appeal for public understanding, one senses Naruhito’s feelings for his wife, whom he promised he would protect with all his strength at the time of their marriage. 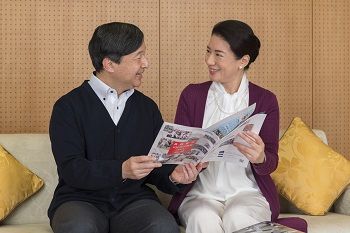 Last December, Princess Masako released a statement to mark her fifty-fifth birthday, in which she talked of her gratitude for the support shown to her by the Japanese people. She also said that she hoped to perform her public duties as well as she can. I hope the new imperial couple will have many opportunities to meet and talk with the citizens of the country.

One past press conference by Naruhito that drew particular attention was the one he gave on his twenty-eighth birthday in 1988, the year before he became crown prince. There was great public interest in his choice of bride, which was perceived to be imminent. Applying metaphors from his hobby of mountaineering, he said that he was still at the seventh or eighth station—Japanese climbers divide mountains into 10 stations, with the final one being the top. “I can see the summit, but I feel it is so far away.”

Responding to persistent press questions about whether he had met his ideal woman, he responded with a smile, “I may have met her, and I may never meet her.” I was present, and I remember recognizing his honesty. I knew that Naruhito had first met Masako about a year and a half earlier, before she joined the Ministry of Foreign Affairs, at a reception at the Tōgū Palace for Queen Sofía of Spain. He must have had this in mind when he answered. “The prince really cannot tell a lie,” an Imperial Household Agency official said, wiping sweat from his forehead as reporters chased him up for further comment.

I felt Naruhito’s sincerity more keenly still when in September 1989, he gave his first press conference after becoming crown prince. This time, when journalists quizzed him on what “station” he was at in his search for a bride, he greatly played down his earlier comment, “I’m not sure myself. I feel like that statement somehow got a little ahead of the true situation, though.” Shortly before the press conference, Fumihito’s marriage had been formally announced. At a time when his courtship of Masako was not going how he had hoped, Naruhito frankly stated that it would still be some time before his own wedding. And so it turned out, as it would be three and a half years before he and Masako became engaged. 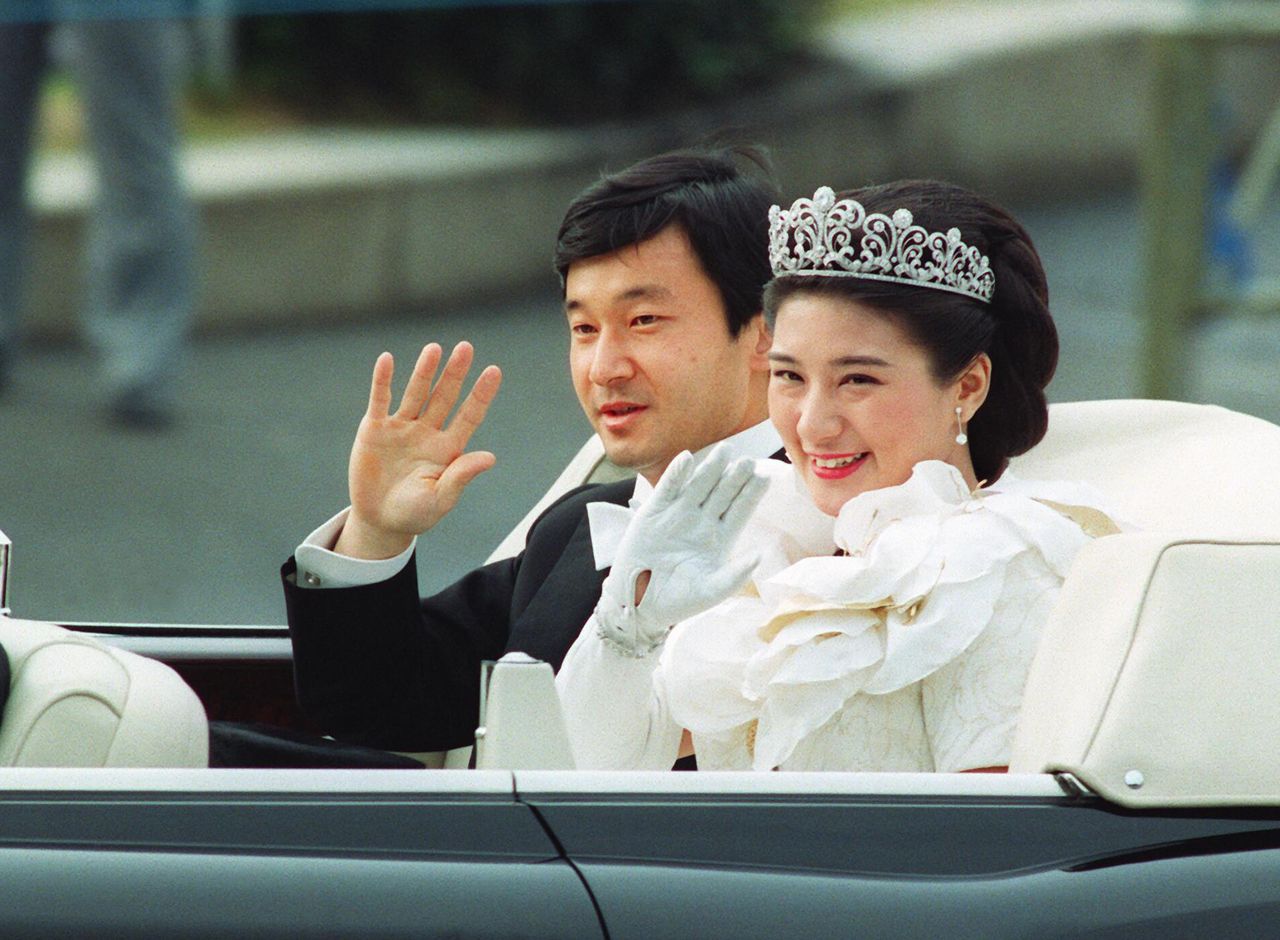 Crown Prince Naruhito and Crown Princess Masako wave to the crowds during their wedding parade in Tokyo in June 1993. (© Jiji)

In 1987, Naruhito made an official visit to Bhutan. The country had recently emerged from a long period of international isolation and established diplomatic relations with Japan the year before. Naruhito was the first major Japanese representative to visit the little-known Himalaya kingdom. He would also travel to Nepal and India on a 16-day tour of the region, and I was a member of the accompanying press corps.

As our small plane, carrying fewer than 20 passengers, entered Bhutanese airspace, the mountains more than 2,000 meters high seemed to recall a mythical, ideal Japanese landscape. The similarity of Bhutanese in appearance to Japanese and the resemblance of the national dress to the kimono fostered a comfortable atmosphere for developing friendly relations.

Naruhito was welcomed for a four-day visit by Queen Mother Kesang Choden, a Japanophile, and other members of the royal family. The 27-year-old prince talked with particular warmth to King Jigme Singye Wangchuck, four years his senior. Having ascended to the throne at 16, the Bhutanese king drew international interest by stressing the importance of citizens’ happiness in developing the country. Naruhito must have felt he could learn a lot from the cultivated king.

Naruhito chose to walk around the city when there was a break in his schedule. His Japanese party’s sudden appearance in the capital Thimphu, population around 30,000, drew thousands of people to crowd around them. Even so, Naruhito never stopped smiling. He entered a souvenir store, where he examined famous local products and bought a bamboo lunch box and Buddhist artwork. The next day he went to a farmhouse, where he heartily drank the host’s proffered local brew, spoke to the children, and got to know the Bhutanese people better. 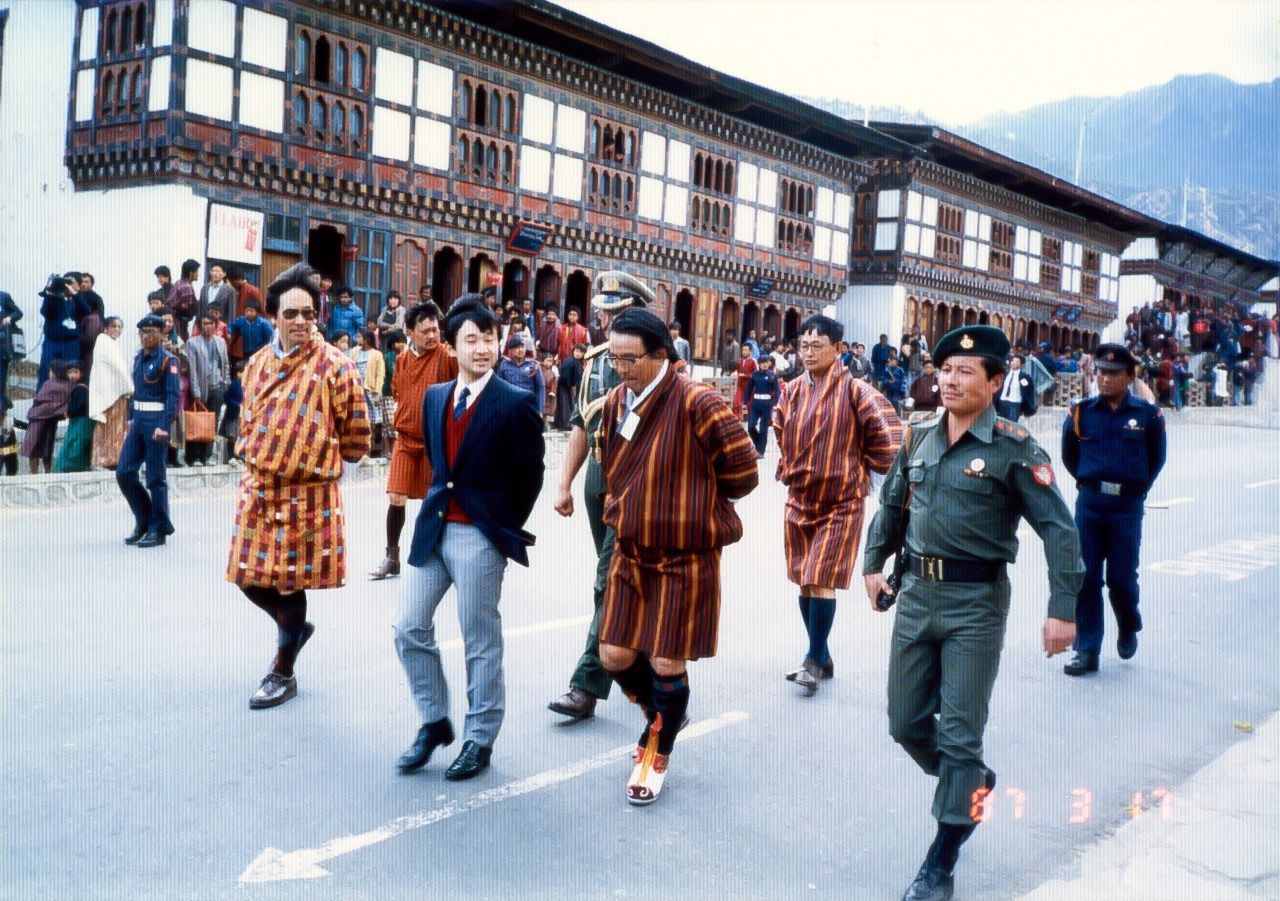 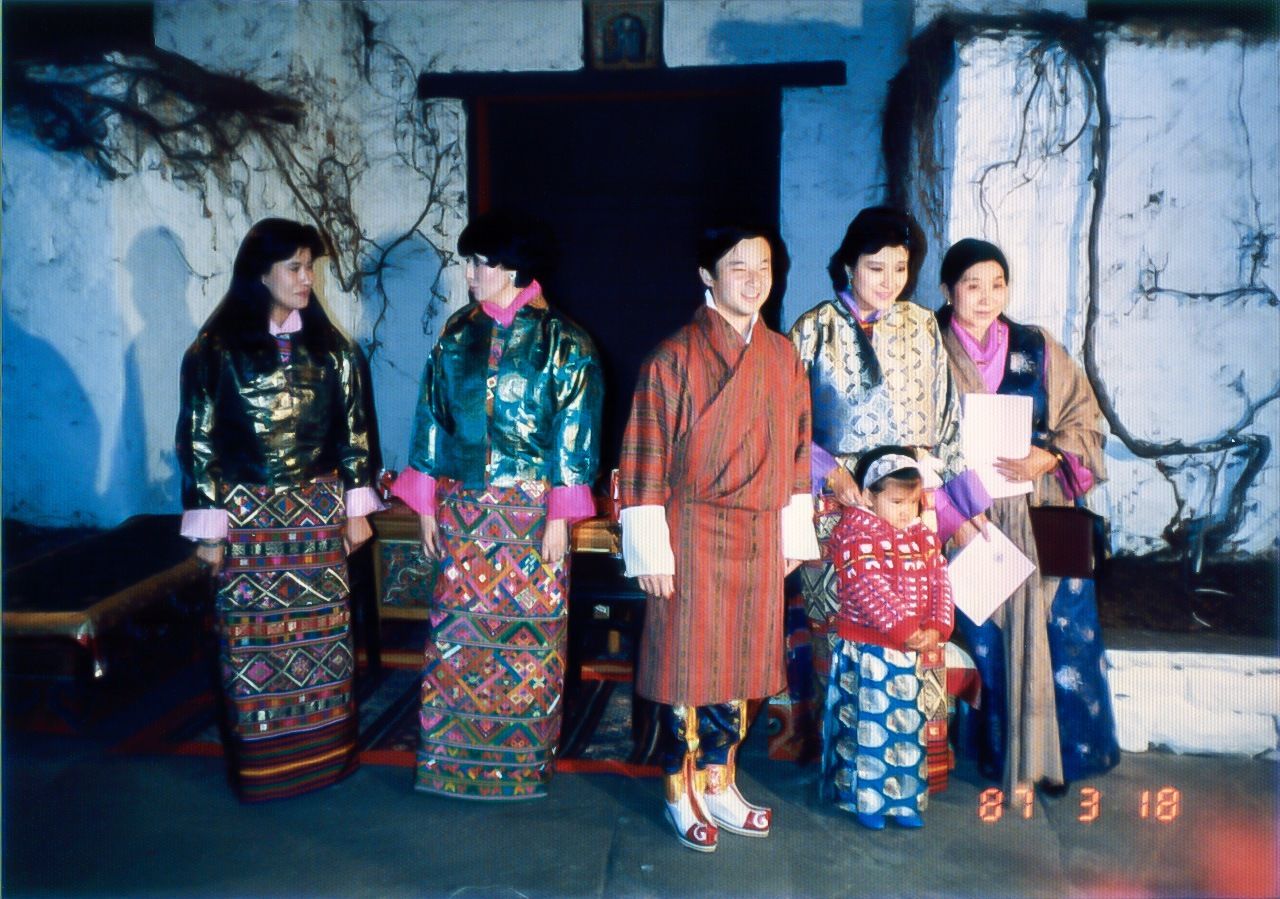 On the last night, members of the press were allowed to attend the court banquet hosted by the queen mother. Naruhito wore the kimonolike gho as he danced, and journalists were invited to dance with the king’s sisters. After leaving Bhutan, Naruhito talked of how he had been constantly moved during his visit. “It was like a dream world that transcended time. I found it highly worthwhile spending time with the king and other members of the royal family of the same generation as me.” This was a full-fledged beginning for Japan-Bhutan relations.

Back in Japan, Naruhito made a report to Emperor Shōwa, again wearing the gho. When the emperor passed away two years later, Bhutan set up an altar in the palace displaying his memorial photograph. The nation went into mourning and special memorial services were held at its 300 Buddhist temples. The Bhutanese king also attended the emperor’s funeral. 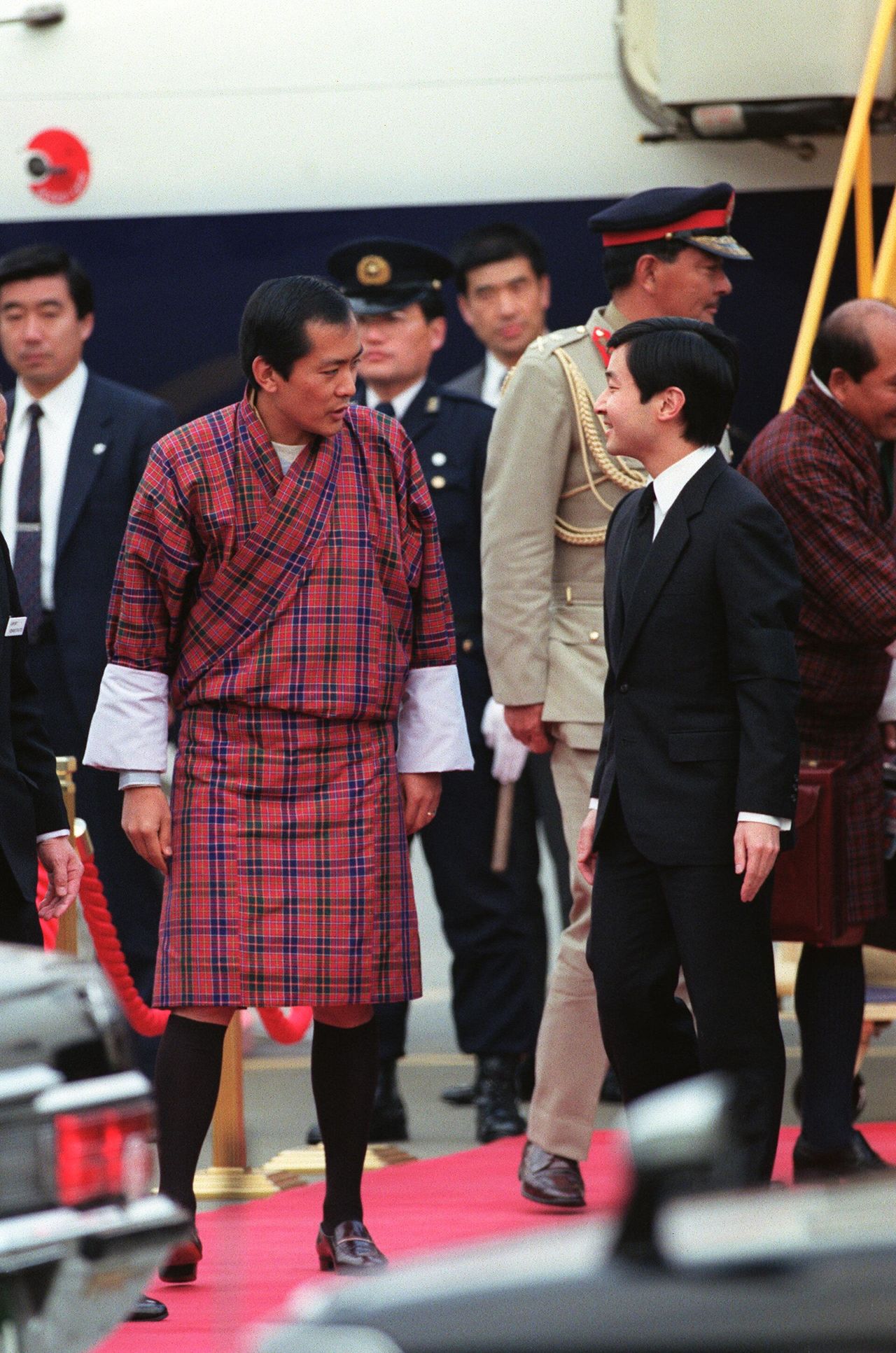 King Jigme Singye Wangchuck is greeted by Crown Prince Naruhito at Narita Airport in Tokyo on February 22, 1989, shortly before the funeral of Emperor Shōwa.

Naruhito first met Masako not long after his return from Bhutan. He had with him the photographs from his goodwill trip, which he must have used to break the ice. I cannot help but believe that there is a mysterious connection between Japan and Bhutan.