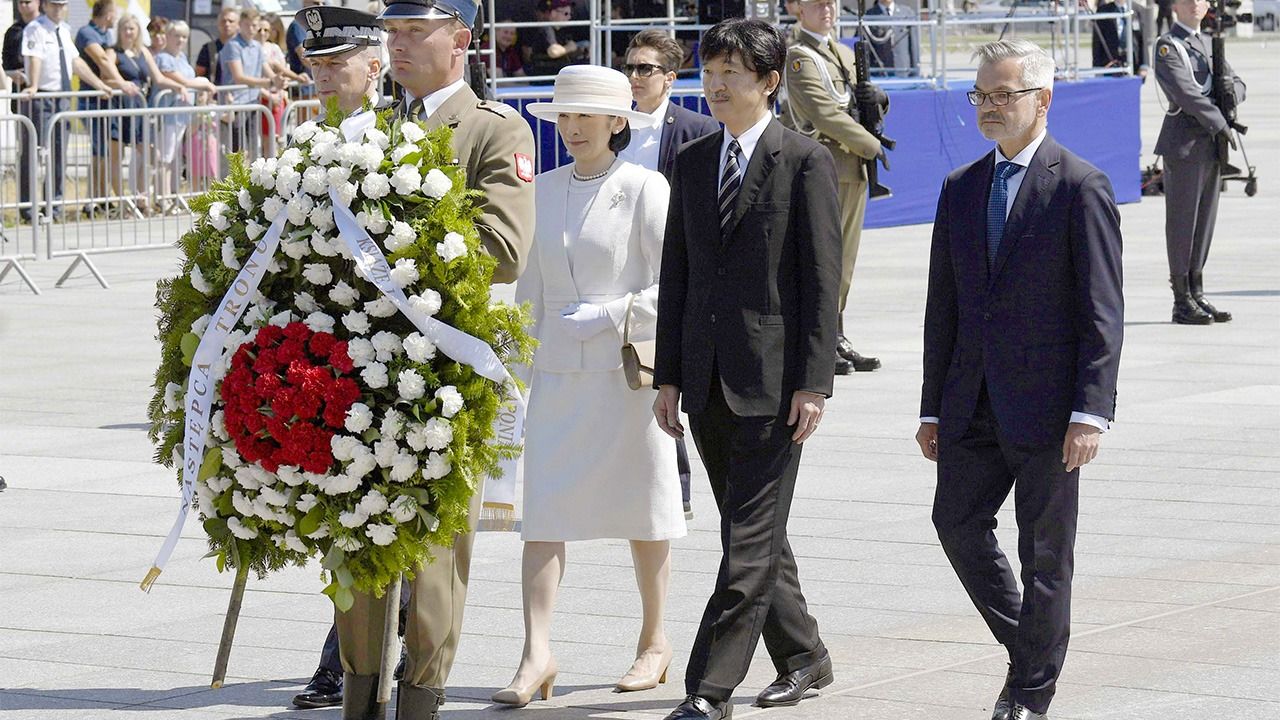 A Trip to Europe

When Emperor Naruhito ascended to the throne in May 2019, his younger brother Fumihito, Prince Akishino, succeeded him as crown prince. As the only other male imperial family member of the same generation—he is five years younger than Naruhito—he carries great responsibility for supporting the family.

Fumihito is head or honorary head of some 13 groups, including the Japanese Association of Zoos and Aquariums. He and Crown Princess Kiko have taken over five of seven regional events attended by Naruhito when he was crown prince while continuing to participate in other events they previously appeared at. They also represent the emperor on overseas visits. Given their busy schedule, their eldest daughter Princess Mako performs some of their public duties.

From late June to early July the crown prince and crown princess traveled to Poland and Finland for official visits marking 100 years of diplomatic relations with each nation. During the trip Fumihito watched a folk dance performance by Polish children and expressed his pleasant surprise at discovering a great interest in Japan among local people. In the former Finnish capital of Turku he enjoyed another unexpected connection with Japan when he met many lovers of the Japanese dog breed Shiba-inu who had gathered to greet him.

Naruhito used government airplanes for official overseas visits when he was crown prince, but Fumihito has continued to use private airlines. Unfortunately, during his trip to Europe two of his flights were delayed, leaving his hosts waiting or forcing handlers to adjust schedules. Fumihito may well have chosen private travel as a way to lessens the cost to Japanese citizens. However, this may change as he has now experienced how his increased importance and related security matters mean that such visits do not proceed as they once did.

Three days after the crown prince and crown princess returned from Europe, Princess Mako set off for Peru and Bolivia for celebrations commemorating the 120th anniversary of the arrival of the first Japanese immigrants to those countries. The busy days of this imperial branch continue.

When Princess Mako marries, she will leave the imperial family and lose her royal status, as is required under the current Imperial Household Law. At a press conference held by the crown prince and crown princess before their European trip, a reporter asked what the couple thought about the issue of fulfilling royal duties as the family diminishes in number.

Fumihito said that in a sense, it was necessary to simply accept that there would be fewer members able to take part in international goodwill activities. “I think we must do what we can with the numbers available,” he commented.

I believe his answer was based on the opinion he expressed in a 2009 press conference that a smaller imperial family was not necessarily a bad thing, considering the expense to the state. As he was essentially arguing against expansion for financial reasons, I take it that he opposes such proposals as reinstating male lines that left the imperial family after World War II. 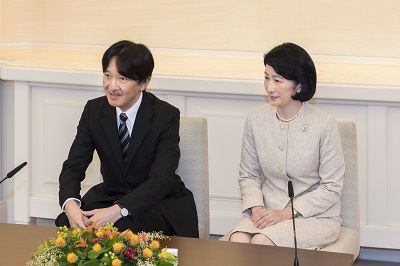 Crown Prince Fumihito and Crown Princess Kiko at a press conference before their trip to Poland and Finland. (Courtesy the Imperial Household Agency)

Last autumn, the crown prince caused a stir by questioning whether public money should fund the one-off Daijōsai—a key festival during the enthronement process in November 2019—given its strongly religious nature. His comment on the need to accept a smaller imperial family also drew interest, and it offers some insight into the thinking of the imperial household.

When questioned about the prospects for Princess Mako’s marriage following reports about her fiancé’s financial troubles, he replied simply that he had not heard anything from his daughter and did not know. Compared with the autumn press conference in which the crown prince and crown princess spoke for more than 10 minutes about Princess Mako, the brief response seemed to indicate their distress at developments.

I think that the couple chose to remain quiet about the matter out of consideration for how their daughter has stood up to the rumors and earnestly performed her public duties.

Education Fit for a Future Emperor

Prince Hisahito is also in the spotlight as the only male imperial family member of the younger generation, and thereby likely to become emperor. He made headlines for startling reasons in April when a man snuck into his junior high school and left knives on Hisahito’s classroom desk. The culprit was quickly apprehended and admitted he wanted to stab the young prince.

Hisahito went with his parents on a private trip to Bhutan in August during the summer holidays, his first overseas visit. Father and son traveled on separate airplanes to avoid the possibility of both the first and second in line to the throne being involved in an accident.

The young prince’s education has become a pressing matter. Emperor Naruhito received instruction suitable for his future position from an early age. Hisahito will turn 13 in September, and the Imperial Household Agency should act quickly to put the necessary system in place. With the imperial family’s future in mind, there are likely to be more opportunities for Hisahito to meet with his uncle, the emperor. I feel that the relationship and cooperation between the imperial household and that of the crown prince are of great importance.

The news of Fumihito’s engagement in August 1989 surprised many in Japan, as it was only seven months after the death of his grandfather, Emperor Shōwa (Hirohito). The news came while the imperial family was observing a year of mourning and Fumihito was studying in Britain. His engagement to Kiko after a four-year relationship—she was in the year below him at Gakushūin University—also preceded his elder brother’s, and the media interest meant he eclipsed Naruhito for the first time.

The IHA felt that a wedding would be inappropriate during the mourning period, but decided an unofficial announcement was acceptable. After returning from two years studying in Britain, Fumihito married Kiko in June 1990. 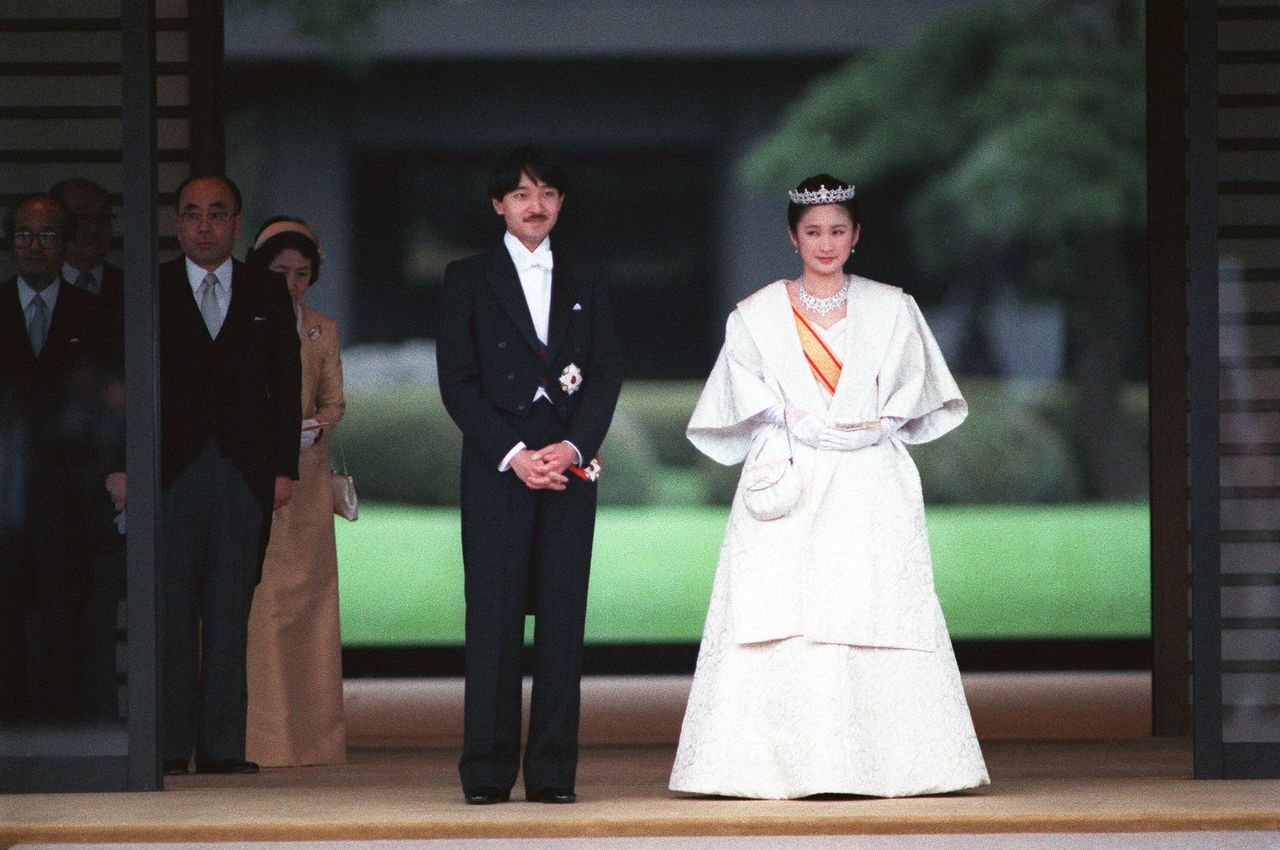 I remember a senior member of Naruhito’s staff saying that the expected order had become reversed because the then crown prince had met difficulties in finding a wife. Naruhito himself told reporters that he had strongly encouraged his younger brother to get married.

On the wedding day, a snap taken of Kiko casually fixing her husband’s hair in a break during the official photograph session later caused a stir. Believing that it conveyed the feelings of a new wife, the photographer sent it out to the media and it appeared widely in the press. The IHA held that it was not an official photo and asked for it to be withdrawn.

Chief Cabinet Secretary Sakamoto Misoji gave an alternative judgement, however, commenting that it was for the media to make decisions on photographs, and that it was a heartwarming picture.

At a September 1989 press conference, Fumihito and Kiko expressed their wishes to build a happy household. Now three decades have passed, and next year Crown Prince Fumihito will reach a new turning point. In April 2020, he will be formally invested in his position as crown prince, first in line to the throne. It will also be the year currently set for Princess Mako’s marriage after a lengthy postponement. Many citizens will be watching what happens next in the crown prince’s household.

(Originally published in Japanese. Banner photo: Crown Prince Fumihito and Crown Princess Kiko lay a wreath at the Tomb of the Unknown Soldier in Warsaw, Poland, on June 28, 2019. © Jiji.)