The Dark Side of the Japanese Internet

Society Feb 26, 2019
From dating apps to social media, the Internet has created new ways for people to connect. However, in Japan cases of young women seeking financial support from older men in exchange for companionship illustrate the risks of trusting strangers online.

The term papakatsu has recently joined the Japanese lexicon. It refers to young women seeking out on social media and dating apps older men who are willing to shower them with gifts. Although similar to the idea of sugar dating familiar in Western countries, the Japanese expression generally implies a platonic relationship—meals, shopping, movies, but no sex. The practice was even the focus of a 2017 smash-hit online drama series about the development of one such relationship that was later picked up by major broadcaster Fuji Television.

The trend in compensated dating has spawned a slew of online services. Most attract women with boasts of male userbases filled with high income earners and prestige careers like doctors and government administrators; promises of nonsexual relations and hints that users can make hundreds of thousands of yen per month are also popular lures. Compensated dating, even by minors, is not in itself illegal as long as it is nonsexual. But despite site operators’ assurance that companionship comes with no physical strings attached, experts warn that such businesses risk becoming hotbeds of child prostitution and other crimes.

Seventeen-year-old high-school student Satomi (not her real name) is among a growing group of young women involved in papakatsu. Standing just over five feet tall with long black hair, she projects innocence and purity. She uses Twitter and friend-making apps to find dates, writing in her profile that she is open to sugar daddies. She is currently dating several men regularly, all full-time company employees, the youngest in his twenties and oldest in his fifties.

Satomi asserts that money is not her main objective, insisting instead that she simply has an interest in older men. She charges ¥5,000 per hour for a date in a cafe or restaurant. She has a strict policy against sex and meeting in hotels, so men looking for a date with a sexual component have to look elsewhere. However, for those merely wanting a few hours of companionship, Satomi’s rate is less expensive than options like a club-sanctioned date with a cabaret hostess.

Satomi says she started compensated dating about a year ago after a person approached her on Twitter. “All I do is have coffee and listen,” she explains. “I just nod and smile at whatever boring things the men are going on about, but they say that talking to me is soothing.”

Although people are free to take part in compensated dating as they see fit, the public generally views the practice as distasteful. This was illustrated when the governor of Niigata Prefecture resigned in disgrace in April 2018 after Japanese tabloids reported that he was involved in compensated dating with women he had met online.

The business of bringing people of the opposite sex together predates the rise of the Internet. The Japanese phrase for compensated dating, enjokōsai, is even said to date from the 1970s and was coined as a coy way to describe married women engaged in prostitution. To meet customers, women registered for services known as “dating clubs” or “lover clubs.” After an initial interview, women could list their names free of charge on club registers that male clients then perused in search of dates. Men were screened for income, paid a registration fee, and were also expected to cover date expenses, but the clubs themselves only made the introductions, leaving what happened next up to the two parties involved. Women who graduated from a well-known women’s school or were models or flight attendants were almost guaranteed a steady stream of introductions.

Dating clubs eventually gave way to “telephone clubs” that required no advance registration and could be used by anyone. Men simply walked into an establishment, positioned themselves before a telephone assigned to them by a staff member, and waited for women to call into the club.

The first such shop is said to have opened in Kabukichō, Tokyo’s red-light district, in 1985. Telephone clubs offered greater anonymity than dating clubs and attracted a wider variety of customers. However, they drew public ire and were soon targeted by local ordinances that restricted where they could operate. 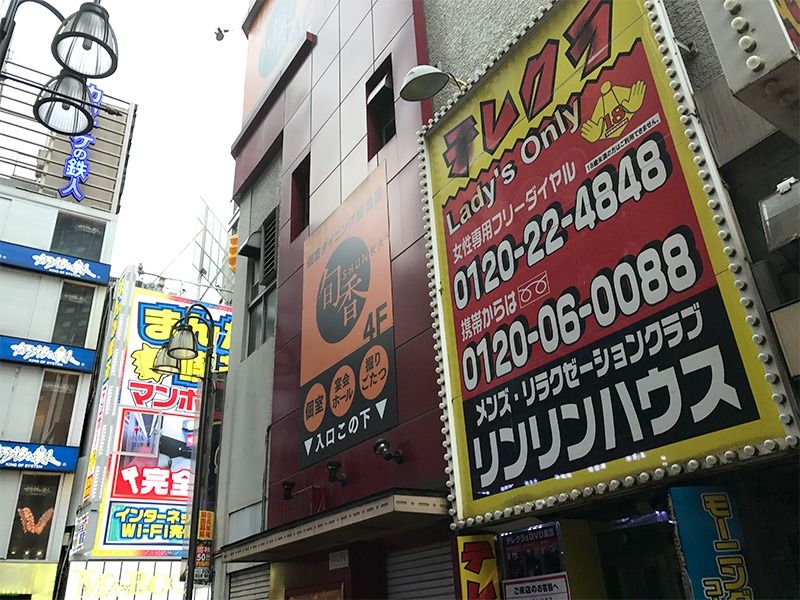 The industry evolved further when Japan’s communication giant NTT launched its Dengon Dial phone message service in 1986, followed by its premium-rate telephone number service Dial Q2 in 1989. Dating and telephone club operators quickly adopted these new technologies to create what were called two-shot dial services that connected people anonymously by phone—men paid ¥100 per minute to call into a premium-rate number while women dialed a toll-free line. The services were transformative by eliminating the need for users to visit shops and came to be used in particular by younger people.

A profusion of lines sprung up, including those for people who wanted to arrange dates and others who were merely interested in phone sex. However, news of staggering telephone bills and compensated dating masking child prostitution became cause for public concern, and authorities took steps to rein in these services.

Hook-Up Sites and Crimes of Passion

When the Internet began to take off in the mid-1990s, these businesses grew into so-called hookup sites that enabled perfect strangers to easily connect for trysts and other purposes. In 2001 there were several high-profile crimes linked to such sites, the first a disturbing story of a high school student who attempted to stab to death—allegedly at her request—a housewife he had met online. This was followed by the shocking murder of a female university student in Kyoto by a man she had been exchanging emails with.

The incidents resulted in authorities passing new regulations in 2003 banning people under the age of 18 from accessing hookup sites. But the arrival of social networks like Mixi and Gree the following year made meeting people online easier than ever before. Social media platforms became dating spaces accessible to any user, and direct messaging served as a ready means for any number of sordid purposes, including making unprompted sexual advances or negotiating the terms of compensated dating.

By the time sites began restricting direct messaging functions, smartphones had already started to replace platforms like Mixi and Gree. User could easily access apps like Twitter, Facebook, and Line from the new mobile devices, and hookup businesses quickly found ways to tap into these new modes of communicating.

The National Police Agency in 2017 recorded 1,813 cases in which minors under the age of 18 were victims of obscene acts or prostitution arranged through apps or on social media platforms. This was more than double the number of incidents in 2008, the first year NPA began keeping these statistics.

Toward the end of the first decade of the 2000s, compensated dating and “delivery health,” a Japanese-English term for outcall sex work in hotel rooms rented by clients rather than a fixed location, had morphed into a veiled form of professional sex work known as en-deri.

On the surface the interactions are the same as any other compensated dating arrangement, with women posting profiles on hookup sites. However, when a male client contacts a person to arrange a date, they are unwittingly interacting with a male dispatcher who in the online character of a woman negotiates details like meeting place and payment before sending a call girl. Perpetrators of such operations exploit the ease of registering on hookup sites, and even if discovered, effortlessly disappear, only to pop up again under a different profile. Subsequently, prostitution rings are increasingly turning to dating sites to sell their services.

Such a scheme played a part in a 2013 murder of a 16-year-old female vocational college student in Hiroshima Prefecture. In the case, a group of youths kidnapped the victim following a spat on messaging app Line, took her to a remote area where they tortured and murdered her. Six of the seven people arrested for the crime were minors, including three youths, one an en-deri sex worker, who lived in the same apartment as the victim. Reports indicated that a disagreement over the distribution of money earned from prostitution contributed to the event.

Today’s hookup industry is more accessible than ever. However, the dark side of such openness was brought home by a recent case of nine dismembered bodies discovered in an apartment in Zama, Kanagawa Prefecture. The grisly incident brought particular attention to Twitter’s hashtag function, which the killer used to meet his victims.

By adding hashtags to terms like papakatsu, compensated dating, and hookup, Twitter users can turn the platform into a dating site. Once connected, parties can switch to the direct message function to negotiate terms of the rendezvous. Twitter is not alone, of course. There are all sorts of way users can find one another on social media, including various message boards, specialized sites, and even apps like Himabu, a chat service for students popular among middle- and high-schoolers.

The police are not passively standing by, though, and have been bolstering their ability to monitor online activity. Officers have even taken to messaging accounts that hint at compensated dating, arranging meetings to warm the person of the dangers of their actions. Aichi prefectural police recently launched a program in which volunteer college students send warning messages to minors found looking to hookup on social media with the goal of preventing compensated dating by encouraging the impression that the police are watching.

However, every time a new service appears on the Internet, people find a way to use it to run hookup schemes, prompting a new slew of regulations. The endless game of cat-and-mouse is driven by human desire itself, and will continue to exploit new realms as online society evolves.