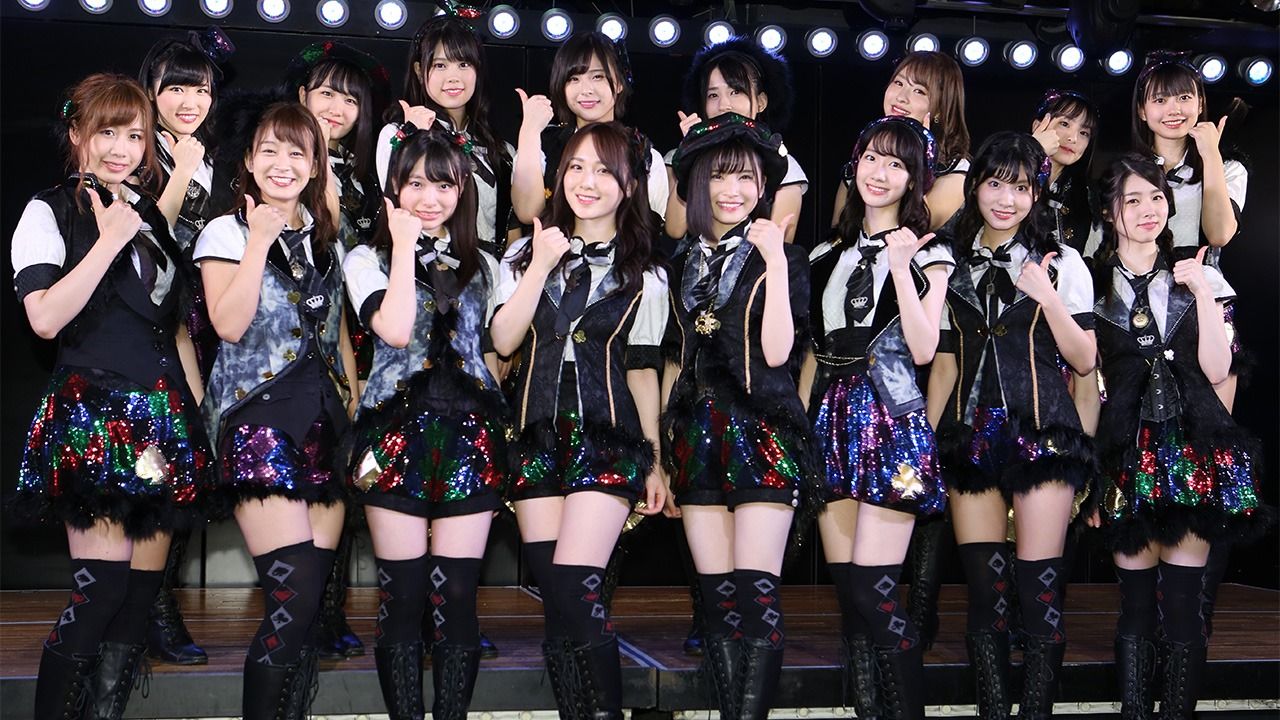 The Idol Management Business: No Room for Small Fry?

Culture Society Entertainment May 22, 2019
We continue our look at the “idol” business with a talk with three former managers at major talent agencies who now manage chika aidoru, or “underground idols.” What methods do talent agencies use to manage their stars, and what is the current state of the idol business?

Many starry-eyed young people dream of becoming “idols”—show business stars. Some succeed, but many others sink without a trace. The ups and downs of the entertainment business also reflect the tone of the times. Mr. A, in his early forties and formerly a manager at a number of major talent agencies, talks about the idol trends he has observed on the front lines. According to him, “the idol business seems glamorous, but it’s fraught with risk. It’s not a business to go into lightly.” 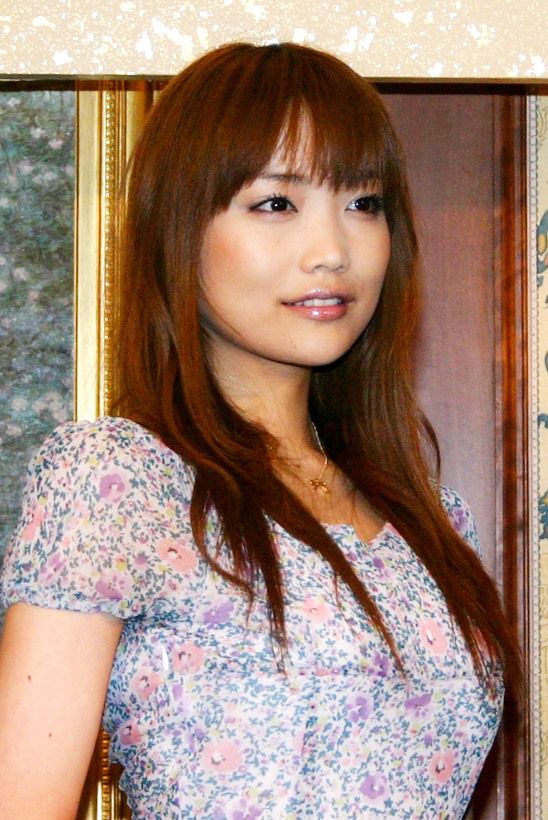 When Mr. A starting working at talent agencies in the early 2000s, the era of one-person acts like Matsuda Seiko and other entertainers was already over. The most popular figures in those days were busty pin-up girls fielded by Yellow Cab, a talent agency headed at the time by Noda Yoshiharu. For many young women, being featured as a pin-up girl was the first step toward an entertainment business career.

Mr. A talks about Noda’s skill at launching his stable of female talent into acting careers, bypassing the usual initial investment essential in the idol business. “First, he would get them maximum exposure in magazine centerfolds and on television. Only after this would he put them into acting, singing, and dancing lessons. The more exposure his charges got early on, the more income they generated.”

Yellow Cab launched pin-up girls like Satō Eriko, Hinagata Akiko, and Koike Eiko into acting careers. But soon after Mr. A started working in the business, he sensed that the tide was turning. He kept an eye on television trends as part of his job and soon realized that TV programs were increasingly favoring fashion models over bikini girls. He recalls: “I felt that audiences had started yearning for personalities with a ‘clean’ image rather than busty girls who were taking their cleavage as far as it could go.”

Mr. A was right on target. The ranks of aspiring show business stars were soon filled by models projecting a kawaii image of girlish innocence. Many of the best-known names of the era—Yamada Yū, Ebihara Yuri, and Oshikiri Moe—started out as models for CanCam, a monthly fashion magazine for young women. These popular models boosted the magazine’s circulation and led to the birth of sister publication AneCan in 2007.

Mr. B, manager of a modeling agency at the time, observes: “Given the nature of their work, models take good care of their skin and are careful to stay in shape. They police themselves, so you don’t have to warn them not to stay out drinking until all hours. In that sense, models are easy to manage because their private lives don’t require so much oversight.”

But changing tastes are a constant, and with smartphones now ubiquitous and promotional videos available on YouTube at all hours, fans have become more discerning as to who has genuine talent and marketable appeal. Even as fashion models appeared more and more often on TV, Mr. A intuited that they would soon fall out of favor, since they had no real entertainment aptitude. And that’s exactly what happened. Only a handful were able to make it as full-fledged actresses. Many of the rest found marriage partners in professional baseball or soccer players, successful entrepreneurs, or other notables.

AKB48 debuted in 2005, just as the popularity of hits released by the all-girl singing group Morning Musume, started in 1998, was waning. Initially, AKB48 didn’t make much of a splash, but their fourteenth single, “River,” released in 2009, topped the Oricon music ranking charts. To Mr. A, that marked the start of the list-marketing era in the idol business—a term he uses to refer to the use of customer lists to broaden the scope of a business. 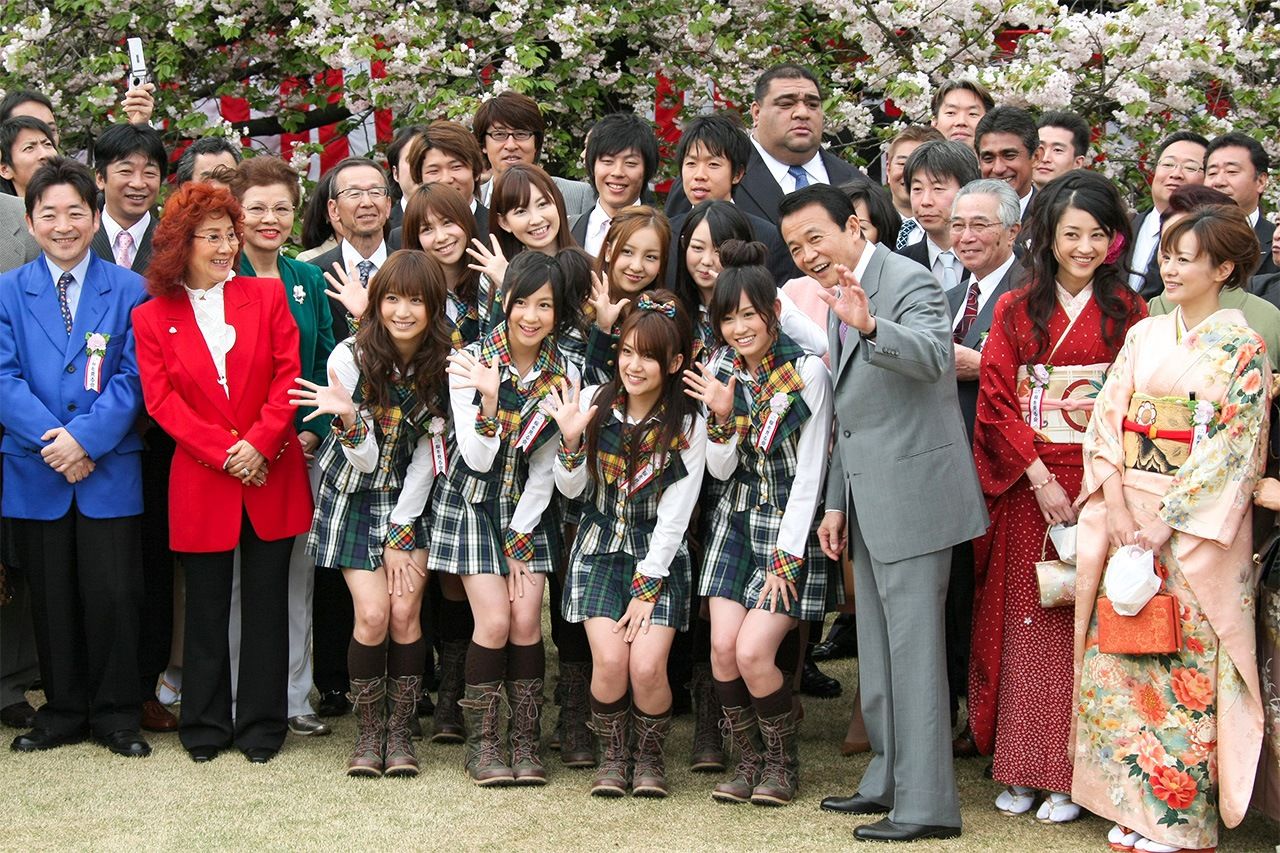 AKB48 members, in uniforms at center, pose for a photo with then Prime Minister Asō Tarō at a cherry blossom viewing party in Tokyo on April 18, 2009. (©Jiji)

A long-time user of list marketing was none other than the market-dominant Johnny & Associates talent agency. Even in the heyday of one-person female acts, Johnny & Associates had developed a steady string of all-male groups, composed of performers each with distinct characteristics and appeal, and used the groups’ fan-club lists to build up its marketing targets.

Billed as the idol group “you can go to meet in person,” AKB48 initially numbered about 50 girls (there are now over 100 active members) who gave concerts in a theater dedicated solely to their performances and who interacted with fans at “meet-and-greet” events. AKB48 proved popular because the group provided a tangible experience, something impossible in a YouTube-dominated environment.

With a group like AKB48, the number of CDs that will sell can be estimated in advance. The same goes for concert attendance. According to Mr. A, “in the entertainment business, numbers are everything.” Even for magazines, plagued with declining circulation, AKB48 was a surefire way of boosting sales, and magazines vied with each other to sign up the highest-profile AKB48 members for photo sessions to feature in their pages.

Mr. A also relates that “to make list marketing a success, the first step is to unearth lots of talented performers and put them into groups. Next, group members need to up their game by taking singing and dancing lessons, to meet the expectations of an ever-more discriminating fan base. The operation needs plenty of staff too, to manage every aspect of the groups. All of that takes a lot of money, which is why only the major talent agencies can get involved.”

The Idol Business on a Shoestring

But some in the industry were not content to leave the glitz and glamour of the idol business solely in the hands of the big talent agencies. There’s also the chika aidoru, or “underground idol,” route, which is affordable for smaller talent agencies looking to discover talent without spending enormous sums.

Mr. C, who used to work for a major talent agency, branched out on his own several years ago and opened a management agency for chika aidoru groups. With the help of talent scouts he knew, he held auditions and recruited seven female performers. He placed them under two-year contracts, with provisions including “no dating,” “obtaining permission before overnighting at a friend’s home,” “no switching agencies without approval,” and “receiving 50% of performance fees and 30% of merchandise sales.” Contracts were renewable thereafter for a year at a time, subject to verbal agreement between the parties.

But four of the women quit before even a year had gone by, giving various reasons: they had lost their taste for show business, they lived far from Tokyo and commuting from home was difficult, they couldn’t dance anymore due to physical wear and tear, and so forth. Mr. C is philosophical about the attrition rate, though. “These girls had two-year contracts, but even if you tried to change their minds, it wouldn’t be any good for the group’s synergy. They’re still young, so thinking about their future lives, it’s probably for the best that they quit now.” Mr. C held additional auditions and hired more two performers to create a five-person group.

Making full use of his connections from his earlier talent agency dates, he worked hard to promote his act, booking them to perform at the Tokyo Idol Festival and other major venues. The group had 20 performance dates a month. But when asked how much money his agency had made from this, Mr. C ruefully admits: “My staff was unpaid, but I still ended up ¥3 million in the hole the first year.”

In the underground idol business, this is how the numbers work out. Expenses include fees to songwriters, costume purchases, the cost of singing and dancing lessons for group members, and expenses for producing T-shirts and other merchandise. At first, Mr. C commissioned songwriters he was acquainted with to write songs for the group at ¥500,000 per song. But since the group wasn’t bringing in as much income as he had expected, he soon bargained the price down to ¥100,000 per song. All told, expenses came to ¥8 million a year.

The income stream, meanwhile, consisted of only two sources: fees for media appearances and merchandise sales. While the group might appear solo in live performance once a month, during the rest of the month they performed on programs that included several groups, splitting payment among them accordingly. Fees for media appearances were also difficult to negotiate and were frequently next to nothing.

Merchandise sales were lackluster. Mr. C had produced T-shirts for the group, but few sold, leaving him with dead stock on his hands. The only revenue coming in was from sessions involving a short chat and photo taken with a fan’s favorite group member, priced at ¥1,000. This was a relatively good money-maker, since it involved only the minimal cost for the instant film used to take the photo. As provided in their contracts, group members received 30% of sales, but in the end their only income came from these photo sessions. The more popular girls could make ¥60,000 or ¥70,000 a month from this, but the others earned only a measly ¥20,000. Meanwhile, Mr. C was left with only ¥5 million—not even enough to cover expenses. But for someone who did not exploit his performers, this may be the best result that can be expected.

The End of the Chika Aidoru Business

Mr. C’s group started out with seven members, four of whom quit within a year. Three of the girls dropped out voluntarily, but Mr. C fired the fourth for breaking contract rules. During a photo session, a fan had slipped this girl a piece of paper naming a place and time for a one-on-one meeting. She was one of the less popular members of the group, and when Mr. C confronted her about her transgression, she claimed that she had agreed to meet the man to keep him interested. Still, she had broken the rules, so he fired her on the spot.

Mr. C confesses that when he fired the girl he wondered whether he was doing the right thing by the other girls, trying to run an act on a shoestring when fans were becoming increasingly discerning. The group limped along into a second year, but when Mr. C proposed that they disband, none of the members objected.

Having closed down his chika aidoru management company, Mr. C opened a new talent agency. Of the five girls in his former group, he hired only those who expressed a genuine desire to continue in the entertainment business. He has kept busy lining up modeling and acting jobs for them.

In the words of Mr. A, who appeared earlier in this article, “In the idol business, promotion alone doesn’t guarantee success. Every group needs a good story and a strong dose of luck too.”

(Originally published in Japanese on April 22, 2019. Reporting and text by Kawano Shōichirō. Edited by the Power News editorial department. Banner photo: AKB48’s new Team B dress rehearsal for Shiatā no megami [The Goddess of the Theater] opened to the media in Tokyo on September 6, 2018. © Jiji.)