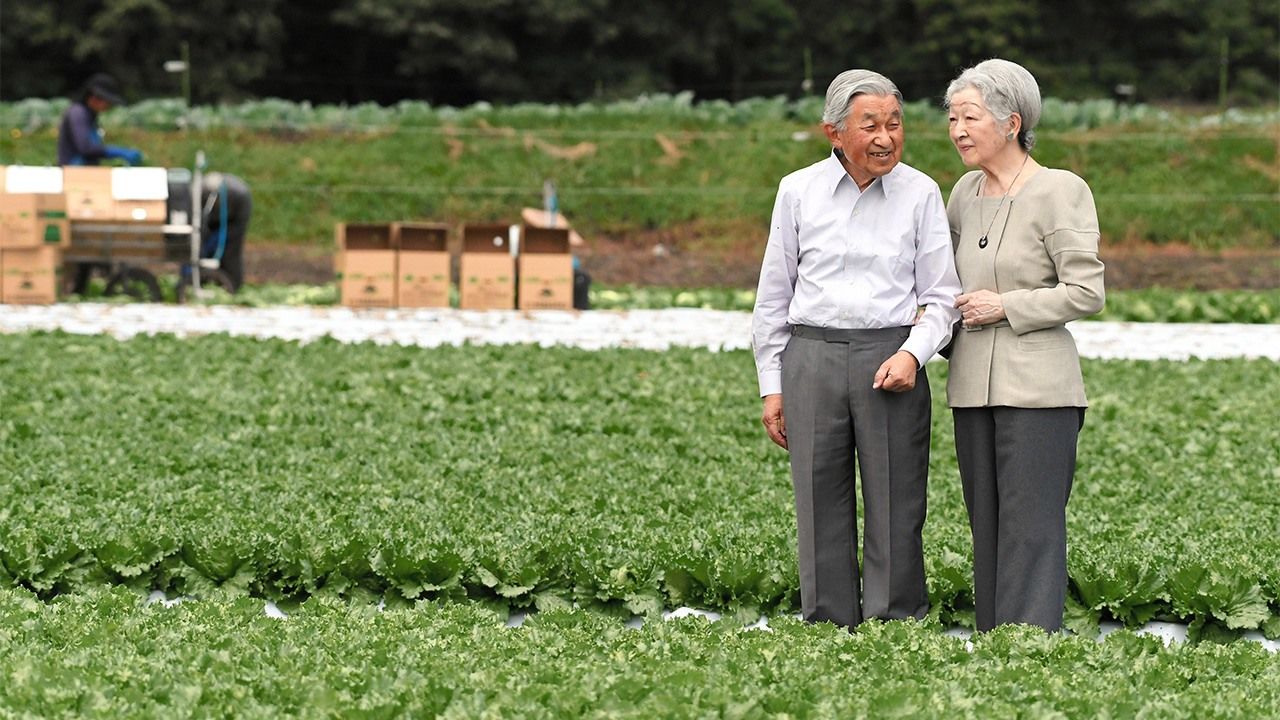 The lives of Emperor Akihito and Empress Michiko will change greatly after the emperor abdicates on April 30, 2019. Their official titles will become “emperor emeritus” and “empress emerita,” or jōkō (上皇) and jōkōgō (上皇后), respectively. While jōkō has been used over the centuries to refer to a retired emperor, the use of jōkōgō is without precedent.

After retirement, the imperial couple is not expected to be directly involved in official duties. In his August 2016 video message to the nation, Emperor Akihito spoke frankly of his concern that advancing age might affect his ability to fully carry out his duties as emperor. As the titles “emeritus” and “emerita” imply, the couple will retire from official duties, and many imperial family watchers predict that they will spend their days in private pursuits instead.

An emperor has many duties. According to the Imperial Household Agency, in 2017 Emperor Akihito perused, signed, or affixed his seal to 960 papers related to Cabinet decisions on affairs of state. Other duties the same year included officiating at investitures of the prime minister and cabinet ministers, receiving the credentials of foreign ambassadors, holding audiences, and attending banquets and so forth on nearly 200 occasions. Another task Akihito will pass his son and successor Crown Prince Naruhito is the conducting of religious rituals at shrines on the Imperial Palace grounds.

From May, the imperial couple will leave their residence in the Imperial Palace, which they have occupied for approaching three decades. They will reside temporarily at the Takanawa Imperial Residence, formerly the home of Akihito’s uncle Prince Takamatsu, before moving into the Tōgū Palace on the grounds of the Akasaka Estate in April 2020. This double move is to accommodate refurbishing of the Imperial Palace residence in preparation for Crown Prince Naruhito, who will become the new emperor, and his family currently residing at the Tōgū Palace and further modifications to Tōgū Palace facilities afterward to accommodate the retired couple.

The couple are actually returning to the Tōgū Palace, where they lived from 1960, the year after their marriage, until 1993. The Tōgū Palace will be renamed the Sentō Imperial Palace, an appellation historically associated with the residence of the retired emperor. Other imperial family members, including the couple’s younger son Fumihito, Prince Akishino, and his family, live on the grounds of the Akasaka Estate, which is also the site of the State Guest House.

Time for Research and Leisure Pursuits

Post-abdication, the couple will have more time to spend on personal activities. Famous for having first met on the tennis court at Karuizawa in the 1950s, Emperor Akihito and Empress Michiko both like to be physically active. They continued to play tennis into their eighties, and their daily routine includes slow jogging and walking.

Some hope that the couple will use the time at their disposal to further pursue their life-long interests. Emperor Akihito is an expert in goby taxonomy and frequently contributes papers to Ichthyological Research, the journal of the Ichthyology Society of Japan, and other academic publications. To date, he has authored 33 papers and has also written several books on the subject. He may publish new research findings in the coming years, taking advantage of the extra time brought by retirement.

Empress Michiko has always enjoyed literature, and she will probably devote more time to reading now. In remarks she made on the occasion of her eighty-fourth birthday in October 2018, she said that she looked forward to catching up on Jeeves, the capable valet in P. G. Wodehouse’s humorous novels.

Music is another shared interest of the couple: Emperor Akihito plays the cello and Empress Michiko is an accomplished pianist. Over the years, they have enjoyed musical performances by Japanese and overseas artists. They will have even more time to do so now and may attend concerts more frequently. They will also certainly enjoy spending extended periods at imperial retreats in Nasu in Tochigi Prefecture, Hayama in Kanagawa Prefecture, and Suzaki in Shizuoka Prefecture, and even go on private trips.

Although the imperial couple will have retired from official duties, it is not as though they will never be seen in public again. For example, Emperor Akihito will probably be sighted collecting gobies from rivers or the sea near their holiday retreats and local residents may encounter the couple as they take walks nearby. They may also appear, along with the new emperor and other imperial family members before crowds of well-wishers at the Imperial Palace during New Year festivities.

The emperor’s official duties will be taken over mainly by the new emperor and his wife Princess Masako, and by Prince Akishino and his wife Princess Kiko. In particular, as the symbol of the state, the new emperor will fulfill duties relating to matters of state, while his brother Prince Akishino will become first in line to the throne as crown prince, and take on the associated duties.

The nation’s 2019 fiscal budget allocates ¥24.064 billion in expenses for the imperial family and the Imperial Household Agency, which manages their affairs. Of this amount, ¥324 million is for the private expenses of the imperial family (the retired emperor and empress, and soon-to-be Emperor Naruhito and his family). After the emperor’s abdication, it is expected that the budget for living expenses included in private expenses, which includes those for the retired emperor and empress, will remain the same. Meanwhile, each of the branch houses will receive ¥264 million for private expenses, which includes a standard allocation of ¥30.50 million for each head of household. However, the standard allocation for Prince Akishino, as the new crown prince, will triple.