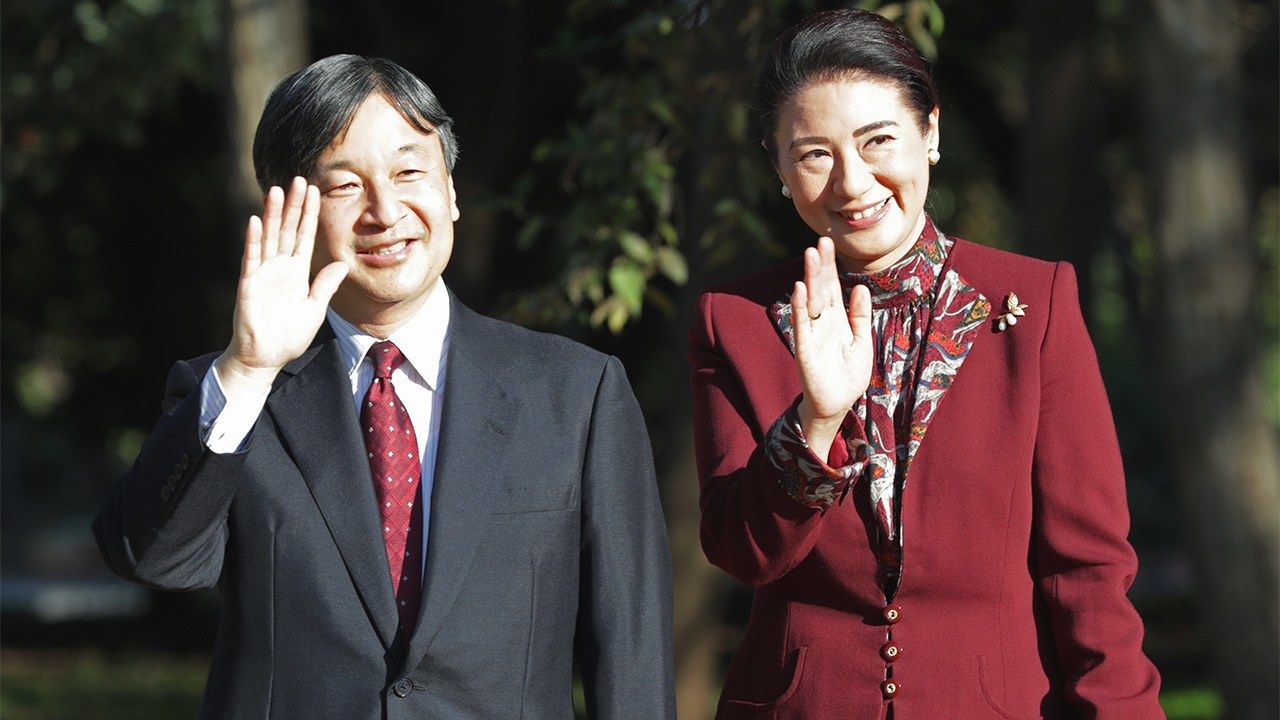 Society Imperial Family Apr 30, 2019
When the Reiwa era begins on May 1, Japan’s new emperor, Naruhito, will face a familiar problem in the dwindling imperial line and will also have to consider how to support his wife Masako in balancing the demands of her official duties.

Running Out of Heirs

Japan’s new emperor, Naruhito, will face critical issues related to the future of the imperial family when he ascends the Chrysanthemum Throne on May 1. He touched on the matter at a press conference before his fifty-ninth birthday in February when he noted how the proportion of male members of the Imperial Family is decreasing, that members are growing older, and that female members are required to leave upon marriage.

While he made plain his concerns, he chose not to pursue the topic further, stating that “as regards the system of the Imperial Family, I would like to refrain from commenting.” The issues facing the imperial family raise questions about how smooth the succession to the next era will be. However, Naruhito understood that by discussing how to counter these problems he risked stirring up a major public controversy. Given his position, he considered it inappropriate to say too much. 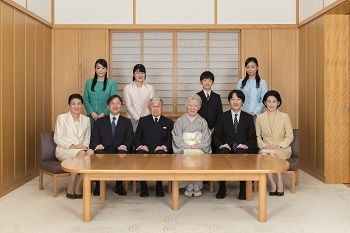 The first article of the Imperial House Law states that succession is solely through the male line. Emperors can only be male, and the Reiwa era starts with just three possible heirs to the throne: Naruhito’s younger brother Fumihito, 12-year-old nephew Hisahito, and elderly uncle Masahito. As emperor, Akihito is said to have worried heavily over future succession issues. He has been blessed with four grandchildren, but under the twelfth article of the Imperial House Law his three granddaughters will lose imperial status when they marry. This leaves only his grandson Prince Hisahito, who may one day find the future of the family resting on his shoulders.

The First Boy for 40 Years

In March, Chief Cabinet Secretary Suga Yoshihide told the Diet that from shortly after the imperial transition in May, the administration of Prime Minister Abe Shinzō will begin considering how to ensure stable future successions. Debate will likely focus on whether to allow female members to remain in the imperial family and establish their own branches after marriage, and whether to permit them or their children to succeed to the throne.

Japan has had eight empresses over its history, but has never had a ruler whose father was not related to the emperor. The government previously consider the matter of reviving the tradition of female heirs in 2005 when Prime Minister Koizumi Jun’ichirō appointed an exploratory panel to look into the issue. Koizumi looked to amend the Imperial House Law Based on the panel’s recommendations. However, in 2006, the arrival of Prince Hisahito, the first boy born into the imperial family for more than 40 years, reduced the urgency of amending the law and Koizumi abandoned the plan. If the reform had gone through, Naruhito’s daughter, Princess Aiko, would have been first in line to succeed him.

Then in 2011, Haketa Shingo, grand steward of the Imperial Household Agency, called on lawmakers to establish female branches of the imperial family to ease succession concerns and maintain enough members to perform official duties. The ruling Democratic Party of Japan responded by seeking expert opinions. Prime Minister Noda Yoshihiko aimed to submit his own amendment in 2013, but in late 2012, Abe successfully led the Liberal Democratic Party back into power and subsequently shelved the bill.

How to go about securing the imperial line is a divisive issue. Conservatives camps typically insist on succession through the male line out of fear that female branches would act as wedges allowing the children of these branches to rule. They instead call for restoration of the cadet branches that were stripped of their imperial status shortly after World War II. 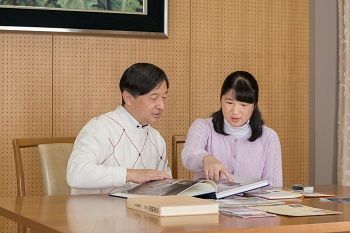 A 2018 Yomiuri Shimbun survey found that 40% of respondents backed the establishment of female branches to support the activities of the imperial family, while 16% opposed the idea, and 43% were undecided. The discussion over female branches will include consideration of whether to raise the husbands of princesses to imperial status. However, amid a lack of clear public consensus on the matter, the recent headlines about the financial troubles of the fiancé of Naruhito’s niece, Princess Mako, are unfortunate because there is a very real possibility the story will starkly divide public opinion.

Talks over the succession are closely tied to the futures of Naruhito and Fumihito’s households. It is a time for Japan to think seriously about what imperial system is best. The new emperor cannot make a direct statement on the matter, but his actions and comments will come under scrutiny.

As emperor, Naruhito will also likely to be concerned about the health of his wife Princess Masako, who has suffered from stress-induced adjustment disorder. She is likely to be compared with her mother-in-law Michiko, who many saw as the perfect empress.

In the past year, Masako has appeared much more often in the public eye. In a statement to mark her fifty-fifth birthday in December, she stated that while working to recover her health, she wanted to continue to make efforts to perform public duties.

On the same day, IHA doctors announced that while she was on the path to recovery, she still suffers ups and downs and is subject to fatigue. They warned the public that expecting too much could be counterproductive and called for understanding that she should not overexert herself in what will be a busy year.

Usually temperate by nature, Naruhito made a rare heated statement in 2004, saying that there had been movements to negate Masako’s career and personality. Masako was under intense pressure to produce an heir and began receiving medical treatment two years after giving birth to her daughter, Princess Aiko, in 2001. Many interpreted Naruhito’s words as criticism of the IHA for its negative attitude toward his wife. Soon after, the IHA made an announcement about Masako’s condition and said she would need a long time to recover. 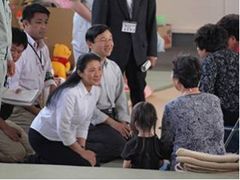 While Masako certainly struggled to acclimate to the new environment in the imperial family, there can be no doubt that the pressure to give birth to a male heir was the fundamental cause of her health difficulties. Seen from this perspective, Naruhito almost certainly made his statement to culture a more favorable attitude toward his wife.

Although Naruhito may hope that people will be understanding if the empress is a less active figure in the Reiwa era, this will require appropriate explanations from the IHA board of chamberlains who serve the imperial couple. It would benefit the new emperor to on occasion speak frankly about his thoughts and the condition of the empress. By doing so, he can impress on the public how hard she is trying and win sympathy for her role as empress.

An Ear to Listen

Some in Japan express concern that the new emperor has not made clear what he aims to accomplish in his reign. This was also the case at the start of the Heisei era in 1989. However, while on the throne, Akihito applied himself to comforting those affected by natural disaster and making up for the still insufficient commemoration of war victims. These acts helped define the era, and Naruhito can learn from his father. In forging his own legacy, he should bear in mind his previous statements that a symbolic emperor should “always be close to the people in their thoughts, and share in their joys and sorrows.”

Although the new emperor will face serious challenges, he will have a mentor in his father Akihito, who as emperor emeritus may keep a low profile but naturally will be able to advise his son. Naruhito will also benefit from the rich international experience of his wife Masako, who was a promising diplomat at the Ministry of Foreign Affairs prior to joining the imperial family. Together, these two can offer wisdom to Naruhito as he considers the many thorny problems ahead.

(Originally written in Japanese. Banner photo: Naruhito and Masako appear at the national tree-care festival in Tokyo on November 17, 2018, for the last time as crown prince and crown princess. © Jiji.)