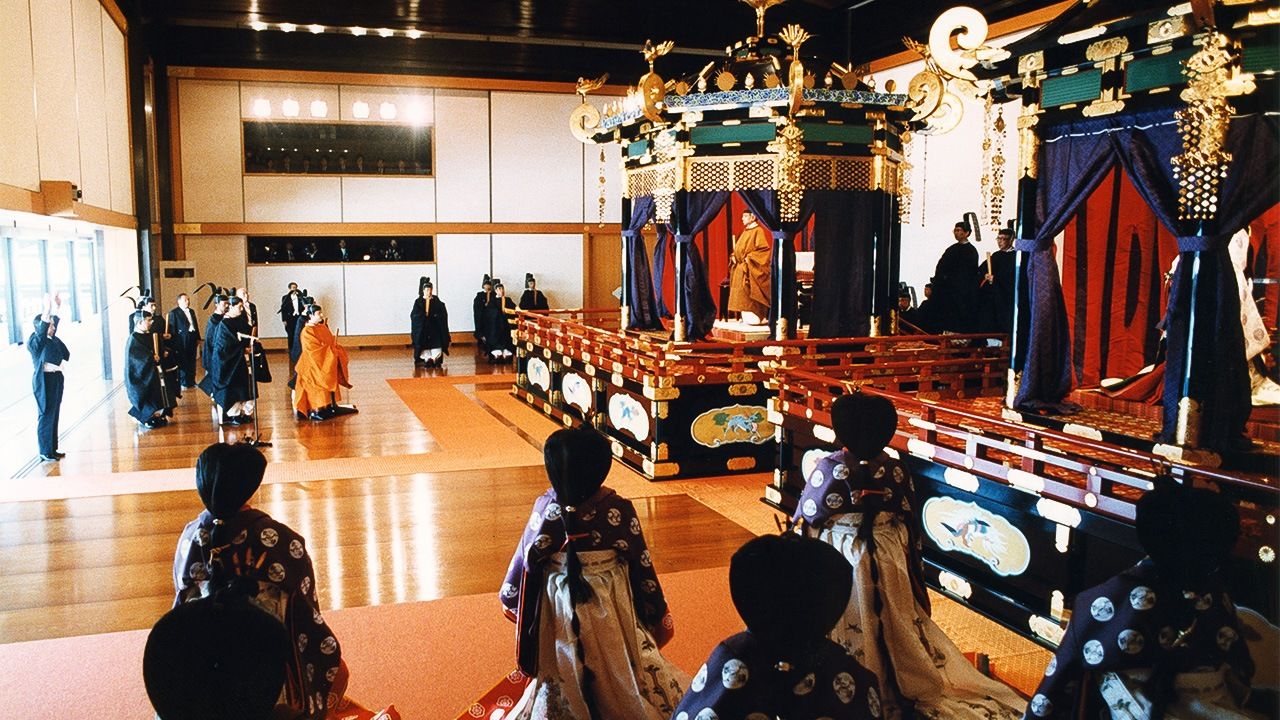 Previously in modern Japanese history, a new emperor did not ascend to the throne until his predecessor had died, and the requirement for a full year of mourning meant that it was always a year or more before key succession ceremonies could be held. This time, however, due to the abdication of Emperor Emeritus Akihito, these ceremonies for Emperor Naruhito are being held in the same year as his succession.

The enthronement ceremony (Sokuirei Seiden no Gi) will be held on October 22, which has been made a one-off national holiday. The simple but elegant ceremony unfolds like a colorful painted scroll of the Heian period (794–1185) in the Matsu-no-ma, the main hall of the Imperial Palace. The same procedures will be followed as the last time this ceremony was held, in 1990.

Wearing imperial robes of state, the new emperor will ascend to an elaborate platform called the Takamikura, where he will declare his imperial succession to the people. The Takamikura is the name for the imperial throne, which has been in use since the Heian period. The current Takamikura was originally built in 1915 for the enthronement of Emperor Taishō. It is 6.5 meters high and weighs 8 tons. The new empress, dressed in a many-layered jūnihitoe robe, will enter a smaller platform, called the Michōdai, located next to that of the emperor. Other adult members of the imperial family will also be present, dressed in elaborate robes of the Heian period.

There will be special emissaries from 195 countries attending the ceremony—30 more than at the previous enthronement ceremony—along with around 2,500 domestic and foreign dignitaries (at the last enthronement there were 2,200). Outside on the palace grounds in front of the Matsu-no-ma, Imperial Household Agency members dressed in traditional garb and holding long swords, bows and arrows, and other such regalia will stand guard before a colorful array of banners.

Banzai: A Term of Controversy

Following the emperor’s declaration of ascension, Prime Minister Abe Shinzō, as the representative of the Japanese people, will offer words of congratulation and then lead the assembled people in three successive shouts of “Banzai!” At the 1990 enthronement ceremony, the first to be held after the end of World War II, there was some controversy over the prime minister’s role in the ceremony and the shouting of banzai, arguments extending even to what the prime minister should wear and where he should stand.

The 1928 enthronement ceremony for Emperor Shōwa was carried out under the pre-war Meiji Constitution. Tanaka Giichi, the prime minister at the time of the ceremony, wore the ancient official robes and after extending formal words of congratulations, walked out onto the grounds, turned to face the Takamikura, and shouted, “Tennō heika banzai!” (“Long live the Emperor!”).

Prior to the 1990 enthronement, there was much argument over the prime minister’s role in the ceremony. Conservatives insisted that the traditional procedures should be followed, but the opposition parties objected, claiming it went against the principles of the postwar constitution and the sovereignty of the people.

Following consultation between the government and IHA, Prime Minister Kaifu Toshiki dressed in the same formal tailcoats worn for official government occasions and remained standing in the Matsu-no-ma when he shouted, “In congratulations on his ascension to the throne, Tennō heika banzai!” It is expected that Prime Minister Abe will follow this precedent for the current enthronement ceremony.

After the roughly 30-minute ceremony, the emperor and empress will change to Western dress and ride in an open car for a celebratory procession along a 4.6-kilometer route from the Imperial Palace to the Akasaka Estate. When the emperor emeritus ascended the throne, he was driven in a 44-car parade and cheered by a crowd of 120,000 people along the way. 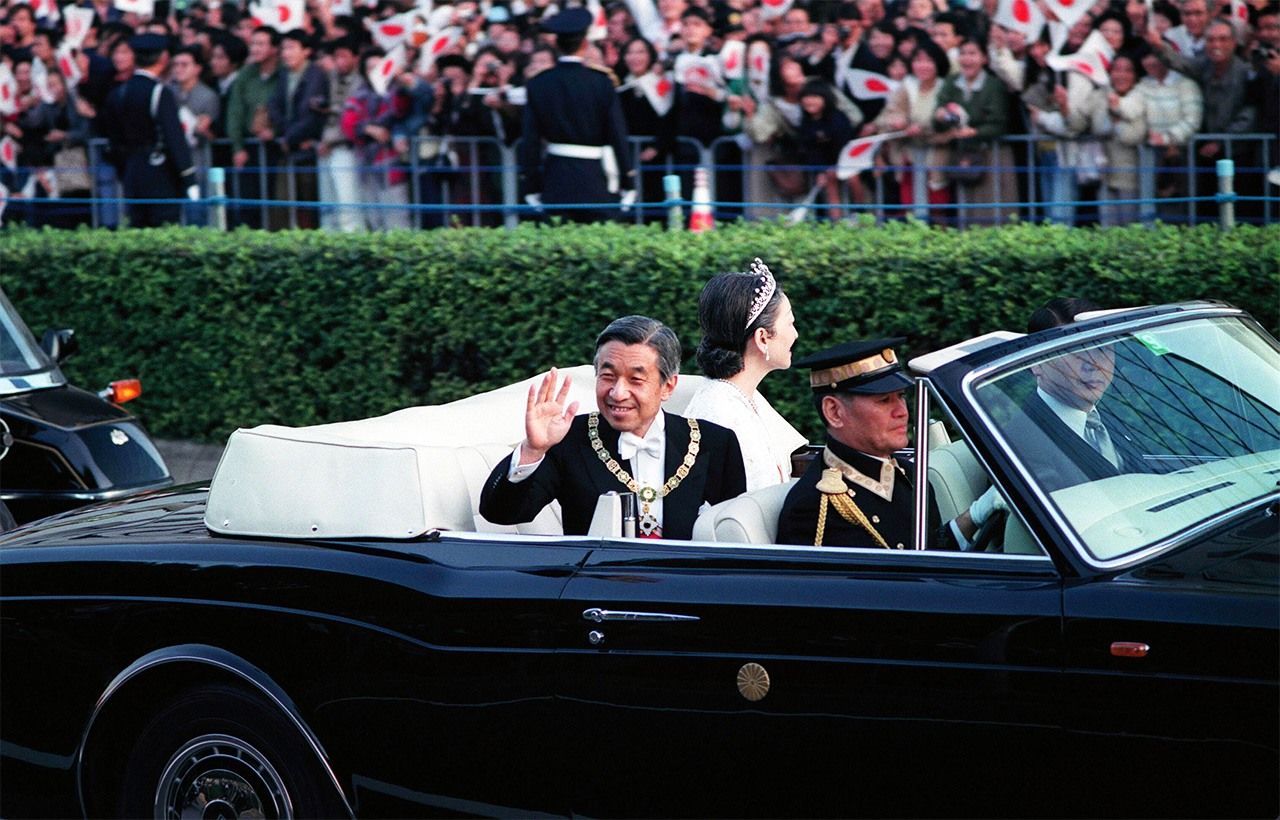 Akihito, now emperor emeritus, waves to Tokyo crowds during the procession celebrating his ascension to the imperial throne on November 12, 1990. (© Jiji.)

The most heated debate at the previous enthronement concerned the Daijōsai, a thanksgiving ceremony that has once again proved controversial. Each year the emperor performs a ceremony praying for peace and bountiful harvests. The first of an imperial reign is known as the Daijōsai and is particularly elaborate. Due to the ritual’s religious nature, at a press conference held in November last year, Emperor Naruhito’s younger brother Crown Prince Fumihito questioned the wisdom of paying for the ceremony out of public funds, suggesting this would go against the principle of separation of state and religion.

The Daijōsai will commence from the evening of November 14 and continue through the night. As on the previous occasion, the rituals will be conducted in a complex of buildings specially constructed for the purpose known as the Daijōkyū. The new emperor, dressed in ceremonial robes of pure white, will make his way through a corridor of flickering torches to the central Yukiden, a sacred hall in which the most important rituals will be carried out. The emperor will be followed by the empress and other members of the imperial family, all of whom will also be dressed in white. 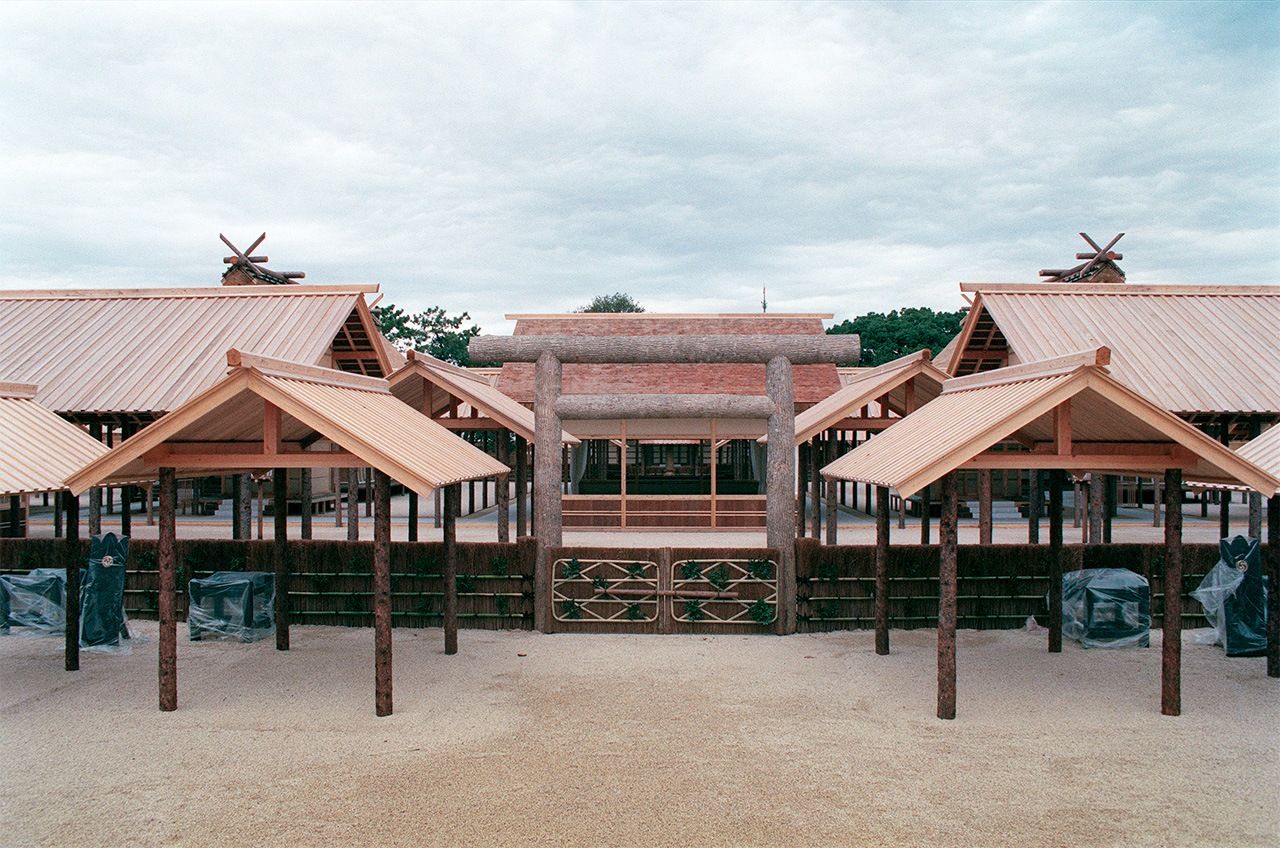 The Daijōkyū built for the previous imperial succession rites in the East Gardens of the Imperial Palace. Photograph taken in November 1990. (© Jiji.)

The emperor enters the innermost recesses alone. There he will solemnly present to the sun goddess Amaterasu and other deities such offerings as rice, white and black sake, and boiled abalone. He will then read from a scroll to give thanks for the continuing public peace of the nation and its people and for bountiful harvests. The ritual concludes with the emperor partaking of the same food that has been offered to the deities. 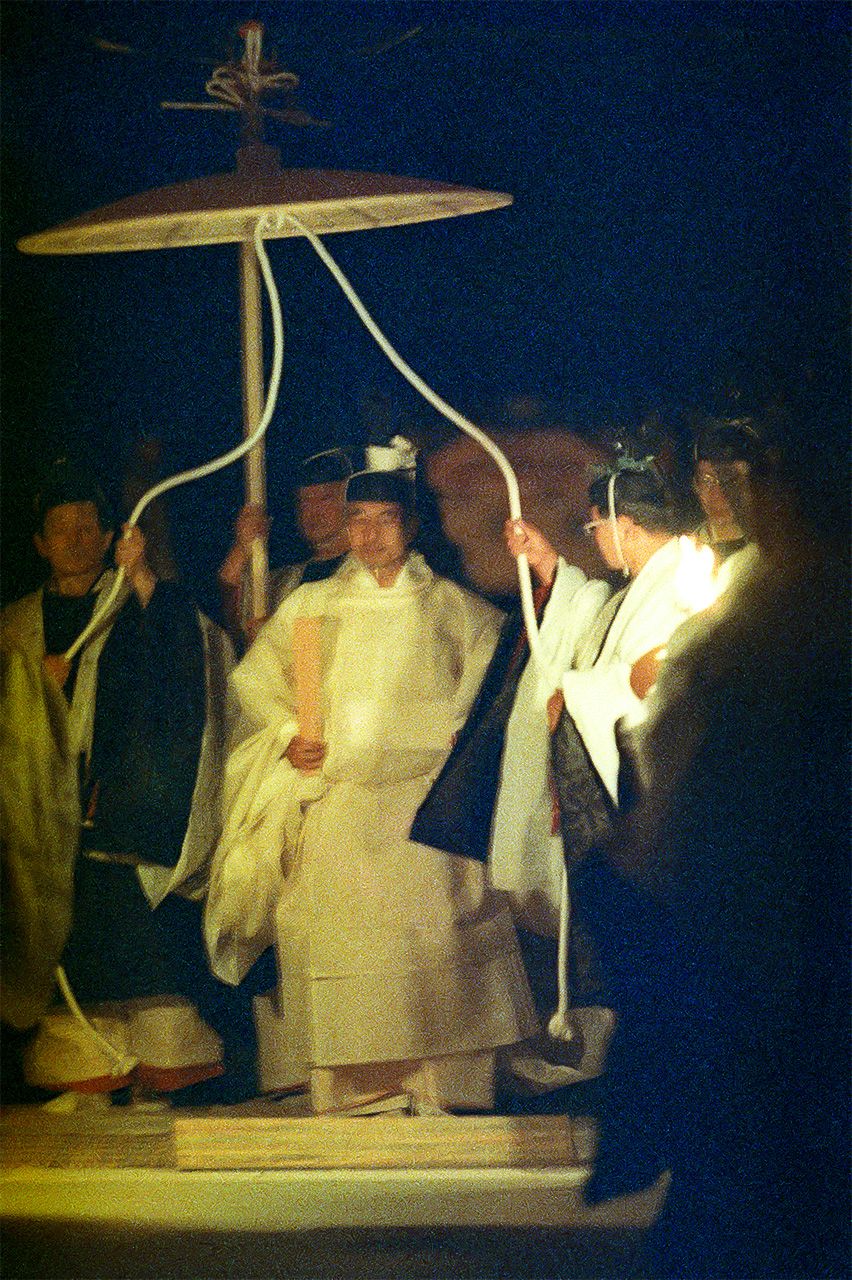 Emperor Akihito accompanied by retainers holding over his head a kasa umbrella-like canopy decorated with a phoenix motif, in the Daijōkyū, Imperial Palace East Gardens, on November 23, 1990. (© Jiji.)

After this three-hour ceremony, the emperor rests. He will repeat the rituals at dawn the next morning in the Sukiden, another building in the complex. These solemn rituals are deeply rooted in Japan’s traditional agrarian culture.

Not a Ritual to Give the Emperor Divine Status

The secrecy surrounding the ceremony, and the fact that an inner “sleeping sanctum” is included in the specially built complex has led to some speculation that the emperor acquires divine status by sleeping with his ancestor, the sun goddess. The IHA refuted such rumors at the last Daijōsai saying the room was a symbolic resting place for Amaterasu, had no bedding, and, in any case, was never entered by the emperor.

The prewar Imperial House Law included provisions for the Daijōsai, but these were removed after the war and there are no current laws or regulations relating to the event. When the emperor emeritus was enthroned, the government did not designate the Daijōsai as a national ceremony in order to adhere to the Constitution’s provision that the state must refrain from any religious activity. This time, however, the government asserts that the Daijōsai is a part of the traditional ceremonies of succession dating back to the seventh century and Emperor Tenmu. And since the Constitution declares the position of emperor to be hereditary, and the Daijōsai is a traditional rite of imperial succession, it is lawful to finance it with public funds despite its religious aspects. As a result, the Daijōsai for the new emperor will be paid for out of the Imperial Household’s budget for public activities.

Crown Prince Fumihito refuted this stance in his press conference and suggested that the ceremonies should be paid for out of the emperor’s personal budget. It later became known that he went even further by submitting a specific proposal to the IHA to hold the ceremonies in the Shinkaden, an already existing facility for imperial ceremonies and events, so as to curtail the expense of constructing the Daijōkyū, the special complex of buildings used only for the Daijōsai.

The IHA will be implementing some measures to cut costs. The Daijōkyū will be roughly 20 percent smaller than its predecessor and parts of the complex will be constructed of prefabricated materials rather than wood. The Yukiden and Sukiden will be roofed with wooden shingles instead of the traditional thatch, and the number of guests will be reduced from 900 to 700. Even so, the increasing cost of human resources and materials means that the total cost of the Daijōsai will exceed ¥2.7 billion, an increase of ¥470 million over the budget for the previous Daijōsai.

The Daijōkyū was originally a cluster of temporary structures built for one night of ceremonies and dismantled immediately thereafter. Under the prewar constitution, however, the cost of the complex burgeoned due to the importance placed on its function in imbuing the emperor with divine status. Guests who attended the last Daijōsai report that though they had been impressed by the solemn atmosphere, they could not see much of what was going on, it was cold, and not a few people left early. Despite this and while it still remains little understood by the Japanese public, the Daijōsai will take place once again.

(Originally published in Japanese. Banner photo: Emperor Akihito and Empress Michiko at the enthronement ceremony in the Imperial Palace Matsu-no-ma main hall on November 12, 1990. To the left, Prime Minister Kaifu leads the cries of “Banzai.” © Jiji.)