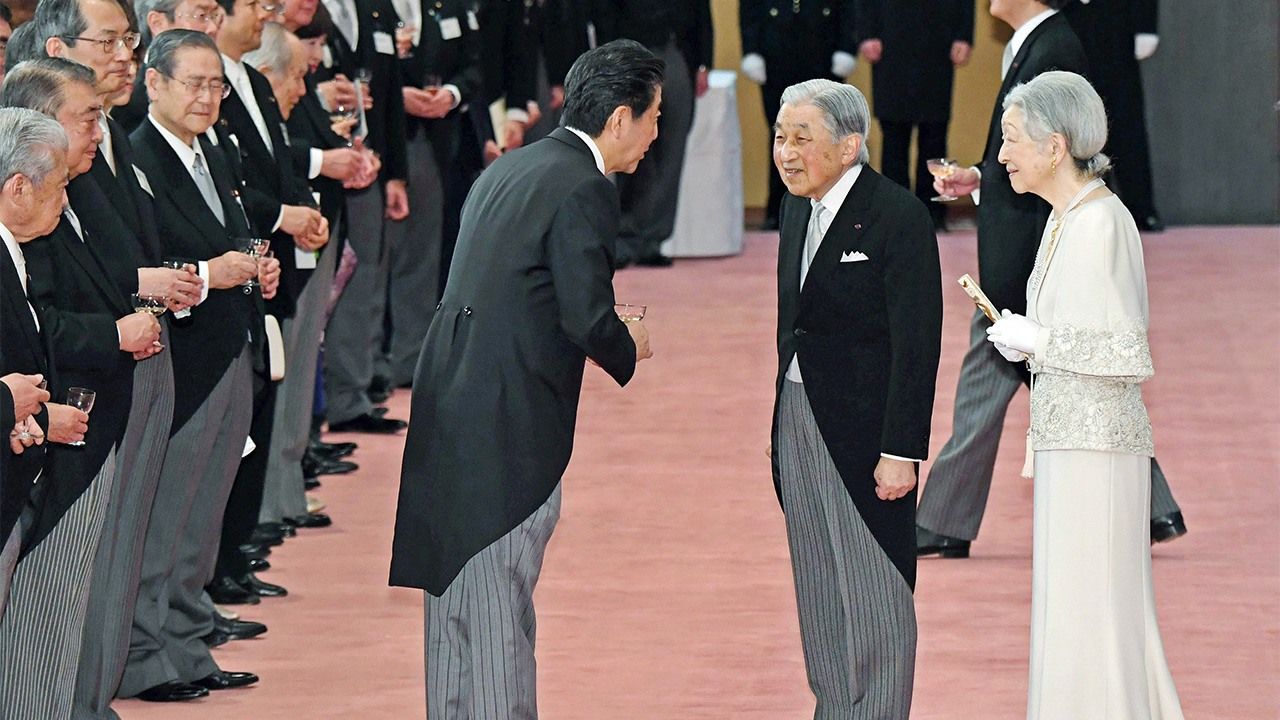 The Emperor and Prime Minister Abe: A Decade of Crossed Wires

Society Imperial Family May 10, 2019
The celebratory mood of the new Reiwa era belies the rocky road that led to this point. Although Emperor Emeritus Akihito indicated a desire to abdicate in 2016, it took the administration of Prime Minister Abe Shinzō several years to grant the wish.

On July 13, 2016, just as the Liberal Democratic Party celebrated its a landslide victory in the House of Councillors elections, public broadcaster NHK reported the surprising news that Emperor Akihito wanted to step down. The Imperial Household Agency immediately denied the report, but the newspapers were quick to run with the story, leading to the emperor reiterating his wish in a video message broadcast on August 8.

It was clear that Akihito and his supporters had planned their strategy carefully. Indications are that the IHA communicated Akihito’s wishes to Prime Minister Abe Shinzō as early as 2012, but to no avail. The emperor conveyed his desire in no uncertain terms again in the fall of 2015, to which the prime minister’s office responded by citing the lack of a legal framework to accommodate an imperial abdication and suggesting that if the aging monarch felt his duties to be onerous, he should appoint a regent instead.

Having their subtle approach rebuffed, those in the emperor’s camp decided to take the drastic measure of having Akihito convey his desire directly to the Japanese people. This opened the way for public discussion and acceptance of the historical move.

The prime minister’s office did not take kindly to being caught off guard. IHA Grand Steward Kazaoka Noriyuki was promptly relieved of his duties and Deputy Chief Cabinet Secretary for Crisis Management Nishimura Yasuhiko was appointed vice-grand steward. The imperial strategy eventually won out, however. When public polls taken by the major newspapers showed 80% to 90% support for the emperor’s desire to abdicate, the prime minister’s office had little choice but to change its stance.

Akihito’s video message stirred the emotions of the Japanese people. Carefully crafted to avert the Japanese Constitution’s prohibition against the emperor’s involvement in government, it reflected on the path Akihito had forged as a symbol of the Japanese state. In it, the emperor spoke of his fear that his advancing age would soon make it impossible for him to carry out his duties with his “whole being.” This was not a problem, he said, that could be solved by simply cutting back on his duties or by appointing a regent to act in his place. He concluded by expressing his hope that “the Imperial Family can continue to be with the people at all times and can work together with the people to build the future of our country, and that the duties of the Emperor as the symbol of the State can continue steadily without a break. With this earnest wish, I have decided to make my thoughts known. I sincerely hope for your understanding.”

In response, the government set up a committee of experts to deliberate ways to lessen the emperor’s burden of official duties and enacted a one-time law allowing Akihito. However, the measures failed to address Akihito’s fervent plea for the government to create a system that would allow for stable and smooth imperial successions. Clearly, he was not asking simply asking for relief from his duties, but the Abe administration chose to ignore his request.

The whole affair revealed the deep chasm between the prime minister and emperor. To understand the resulting pattern of missed signals, it is necessary to go back over a decade.

When Prime Minister Koizumi Jun’ichirō was in office, Akihito broached the subject of imperial succession by women, which the Imperial House Law forbids. Asking through the IHA, he inquired as to the possibility of there being a female emperor. Koizumi’s office responded by setting up an advisory council in 2004 to deliberate possible changes to the law’s provisions for imperial succession. According to a veteran reporter who covered the IHA, Empress Michiko told close friends that she was relieved by the government’s response. 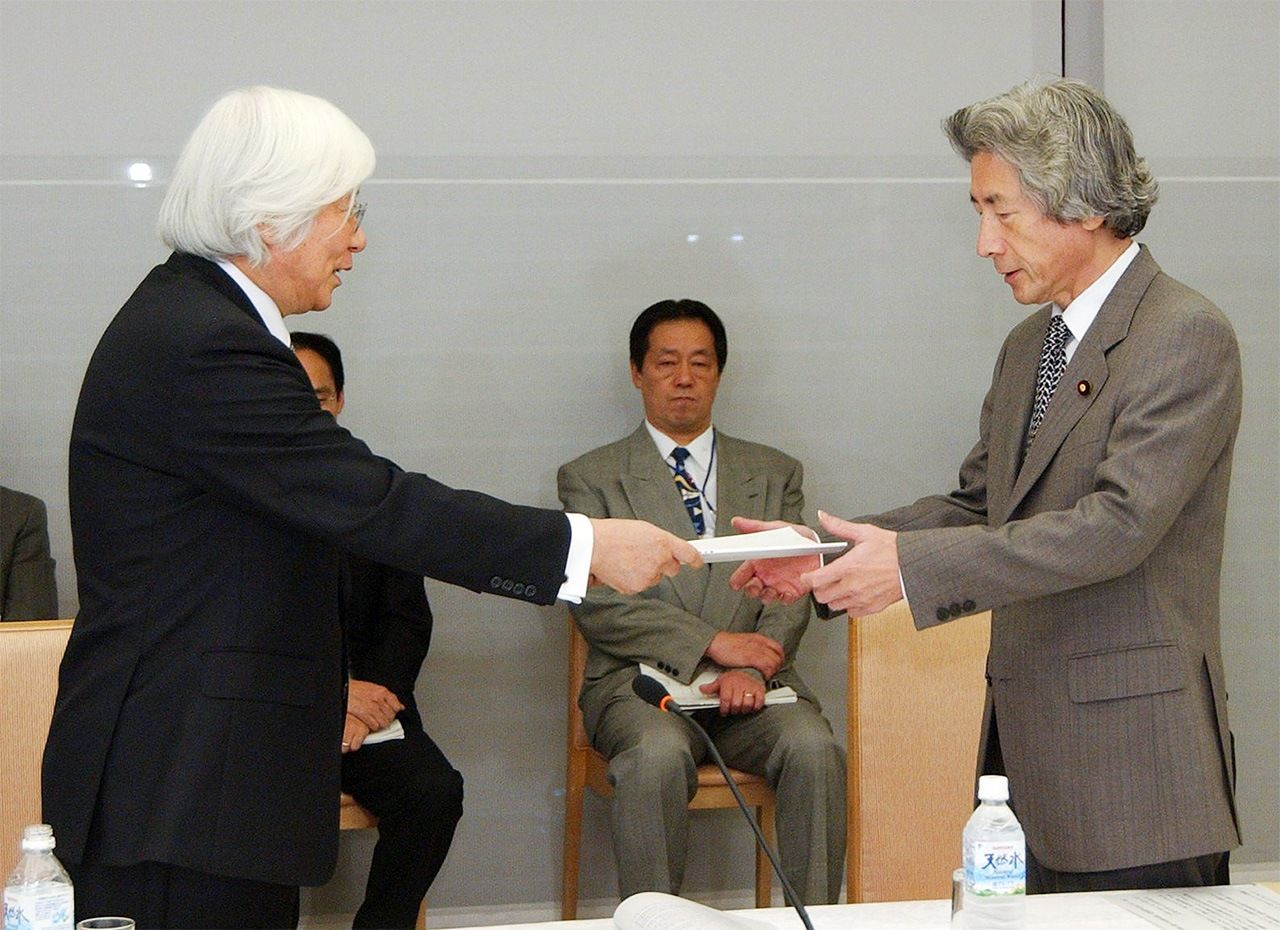 Abe was the chief cabinet secretary at the time and those around him were quick to denounce the report and call for the preservation of the male-only tradition of succession that they claimed had continued for more than a thousand years. Abe, himself, was of the same opinion, and even publicly questioned the wisdom of overturning the tradition of male lineage. By the time Prince Hisahito—Akihito’s grandson and only male heir for the last 40 years—was born in 2006, the Koizumi administration had given up on reforming the Imperial House Law. During Abe’s first tenure as prime minister, he shelved the report and dropped the proposal that would have allowed for female heirs.

Akihito’s disappointment can well be imagined, and in fact, he became quite ill from the stress. Haketa Shingo, grand steward of the IHA, bluntly stated in a December 2008 press conference that the cause of the emperor’s poor health was years of worrying over the preservation of the imperial lineage.

When the Democratic Party of Japan came to power in 2009, the IHA took advantage of the change to convince the administration of Prime Minister Noda Yoshihiko to open the way for female branches of the imperial family. However, once again strong objections were raised by Abe and others in the opposition. In a meeting of a nonpartisan study group, Abe warned that the move was a threat to the basic principles of imperial household’s long history and tradition of male lineage. And in February 2012, the leading monthly magazine Bungei Shunjū published an article by Abe in which he vehemently argued that allowing female imperial family branches could potentially undermine the traditional process of imperial succession.

Akihito’s long-held wish was thwarted once again when the LDP returned to power in December 2012. After taking over as prime minister for a second time, Abe stated in an exclusive interview published by the Sankei Shimbun on December 31, 2012 that there was no change to his policy of maintaining the practice of male succession to the imperial line and that he would not act on the policies initiated by the Noda administration.

Akihito Stands Up to the Abe Administration

As has been frequently noted, Abe and Akihito’s miscommunications extended from their different interpretations of Japan’s Constitution. From the moment he ascended the throne, Akihito vowed that he would, together with the Japanese people, support the Constitution and abide by it in fulfilling his imperial duties. He reiterated this stance throughout his reign, most emphatically on his birthday in 2013. Abe, who had returned to power for the second time the year before, was strongly pushing to revise the Constitution.

At the press conference marking his eightieth birthday, Akihito noted that “what stands out most in my mind is the Second World War. After the war, Japan was occupied by the allied forces, and based on peace and democracy as values to be upheld, established the Constitution of Japan, undertook various reforms and built the foundation of Japan that we know today….and we must not forget the help extended to us in those days by Americans with an understanding of Japan and Japanese culture.”

It should be noted that he says Japan established the Constitution and that he purposely refers to the help of Americans sympathetic to the Japanese people.

In contrast, policy statements published by the LDP refer to the Constitution as a unilaterally imposed document drafted in only eight days and forced upon Japan by Supreme Commander of the Allied Powers General Douglas MacArthur, who sought to disempower the Japanese state. Abe has said in the Diet that the Constitution was hastily drafted in a short period of time by 25 people in the general headquarters of the allied occupation forces. And in a program broadcast on the Internet, he has vehemently referred to the Constitution as an “embarrassment,” noting that it was not prepared by Japanese people and is nothing more than a letter of apology by a defeated nation. Abe’s stance is completely at odds with Akihito’s position that the Constitution is a precious document to be protected and upheld.

The Constitution and the Imperial Line

What is at the root of the disparities between Abe and Akihito? In a 2009 press conference held at the time of his fiftieth wedding anniversary, Akihito said, “When seen from our long history of Emperors, and one compares the way the Emperor was stipulated in the Constitution of the Empire of Japan with the way the Emperor is stipulated in the current Constitution of Japan, I consider that the latter is more in line with the traditional pattern of the Emperors.”

In other words, Akihito feels that the current Constitution better reflects the long history and traditions of the emperor and this ties in with his stance on abdication. Abe’s advisors have had nothing but criticism of this stance since Akihito’s August 2016 video message. Abdication, they insist, goes against tradition. But the “tradition” they refer goes only as far back as the Imperial House Law of the Meiji era. The history of the imperial family is much older than that. Of the 126 historical emperors, 59, close to half, have abdicated.

It is clear that Akihito thought long and hard on this history and how best to ensure the stable continuity of the imperial line.