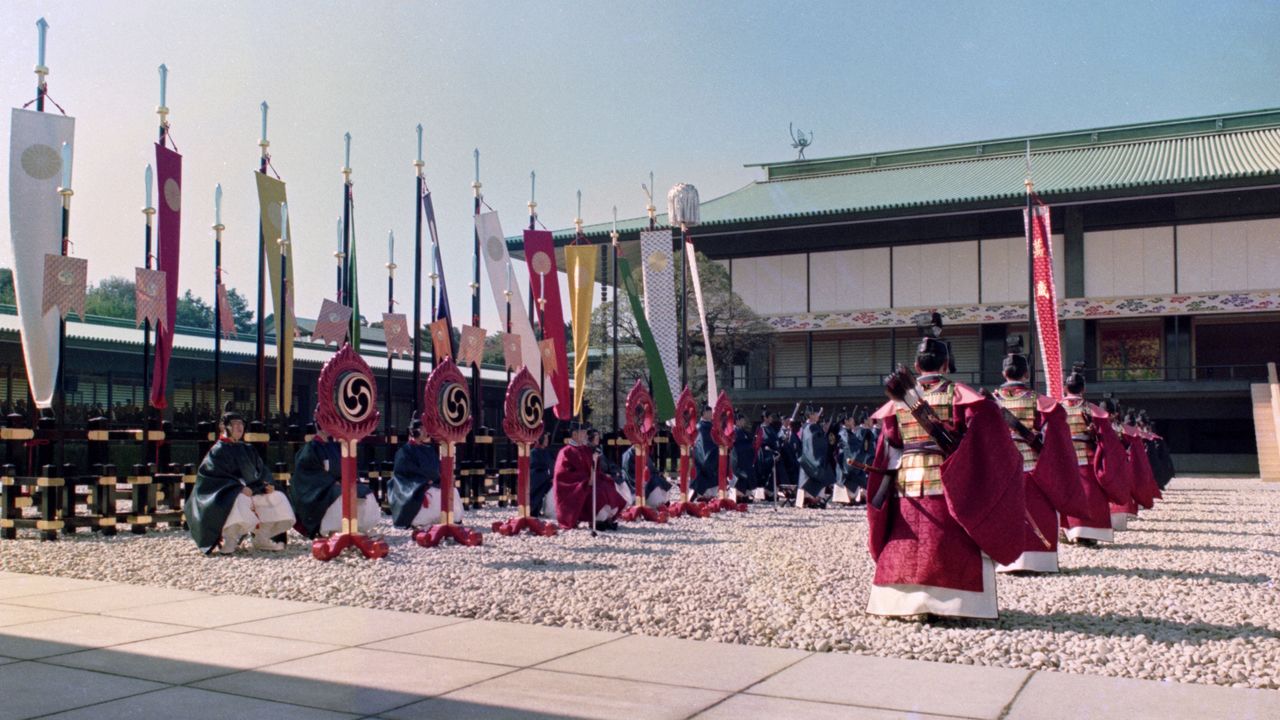 Society Imperial Family Oct 21, 2019
October 22 is a big day in the early Reiwa era, as Emperor Naruhito will have his enthronement ceremony and perform several important rituals.

Emperor Naruhito’s main enthronement ceremony, the Sokuirei Seiden no Gi, will take place on the afternoon of October 22. Before that, however, from nine in the morning he will perform a ritual reporting his ascension to the throne in front of the Kashiko-dokoro, a shrine that is one of the Imperial Palace’s three sanctuaries. It is said to house the sun goddess Amaterasu, the legendary ancestor of the imperial line. Due to its religious nature, it will be a private rather than a publicly funded ceremony. Wearing traditional white sokutai robes, the emperor will bow and read aloud a statement at the shrine.

Empress Masako, dressed in many-layered jūnihitoe robes, will also make obeisance, followed by other members of the imperial family, as well as Prime Minister Abe Shinzō and other representatives of the different branches of government in the garden in front of the shrine. 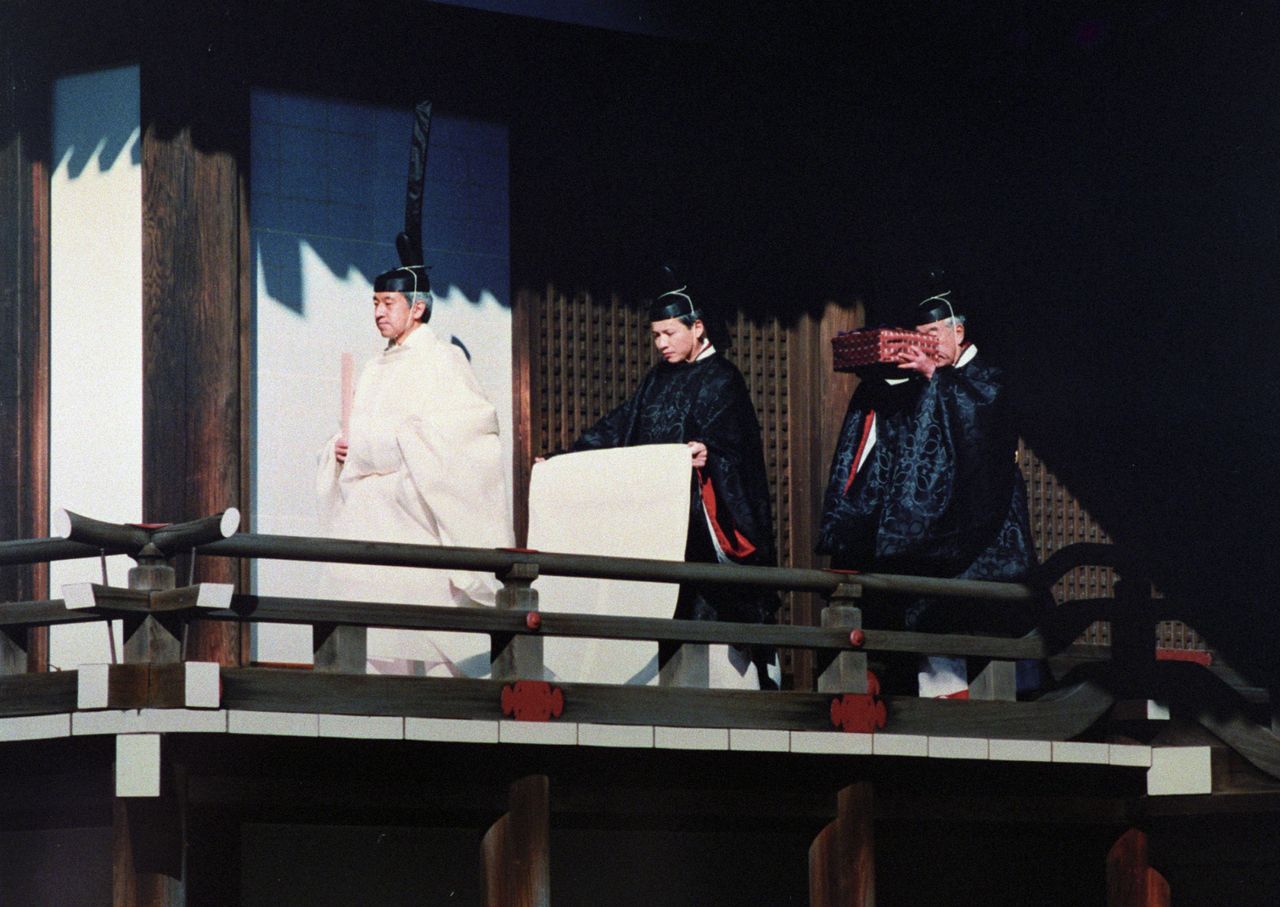 Emperor Akihito on his way to reporting his ascension at the Kashiko-dokoro on November 12, 1990. (© Yomiuri Shimbun)

The central enthronement ceremony will take place for around 30 minutes from 1:00 pm in the Matsu-no-ma, the main hall of the Imperial Palace. Some 2,500 people will attend, including guests from almost 200 countries. Emperor Naruhito will ascend to the Takamikura platform and announce his imperial succession to Japan and the world, swearing to uphold his position faithfully.

Prime Minister Abe will read some words of congratulation before leading the assembled guests in three cheers of “Banzai!” At this time, the Ground Self-Defense Forces will fire a salute from Kitanomaru Park, to the north of the palace. As most of those attending will be wearing Heian period (794–1185) outfits, the scene will recall an old-time picture scroll. 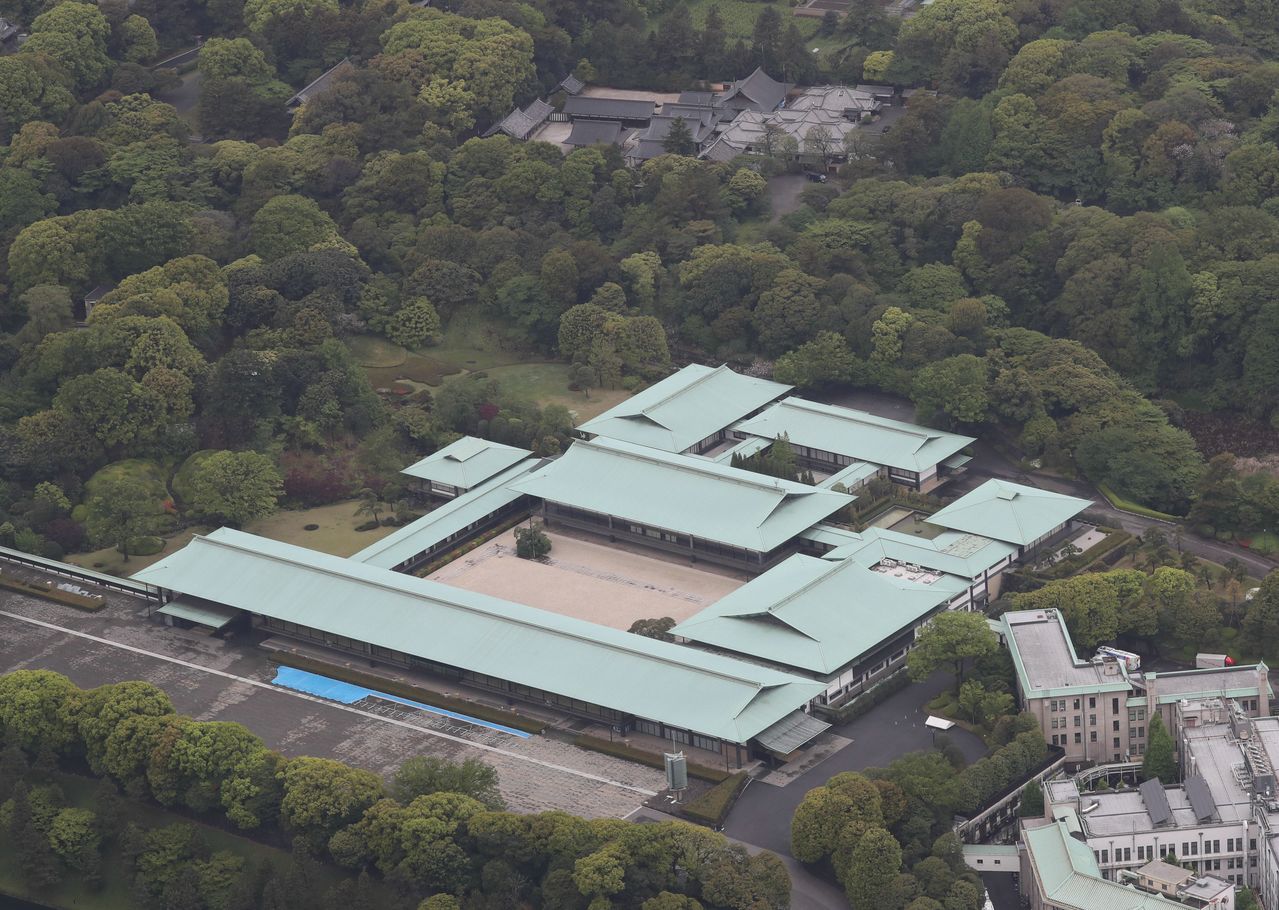 The Imperial Palace, as viewed from the air on April 30, 2019. The enthronement ceremony will be held in the palace’s Matsu-no-ma hall. (© Jiji)

A Pair of Thrones

Records show that a Takamikura, or imperial throne, has been in use since the Heian period. The one to appear in the 2019 enthronement ceremony was newly made in 1915 for the accession of Emperor Taishō. Consisting of an octagonal structure on a three-layered black platform, the Takamikura is 6.5 meters high and weighs 8 tons. It is usually kept in the Kyoto Imperial Palace, but has been dismantled and transported to Tokyo for the ceremony. The sword and magatama jewel, two parts of the imperial regalia, will be placed on a stand on the platform along with the imperial seal and state seal.

Empress Masako will be next to Emperor Naruhito on a throne platform known as the Michōdai. This was built together with the Takamikura and is similar in style, although it is only 5.7 meters high and it is not so ornate.

In the previous ceremony, then Emperor Akihito and Empress Michiko passed through the corridor in front of the Matsu-no-ma, so guests could see them. This time, however, Emperor Naruhito and Empress Masako will enter from the back of the room, returning to the traditional route used since the ceremony was held at the Kyoto Imperial Palace. 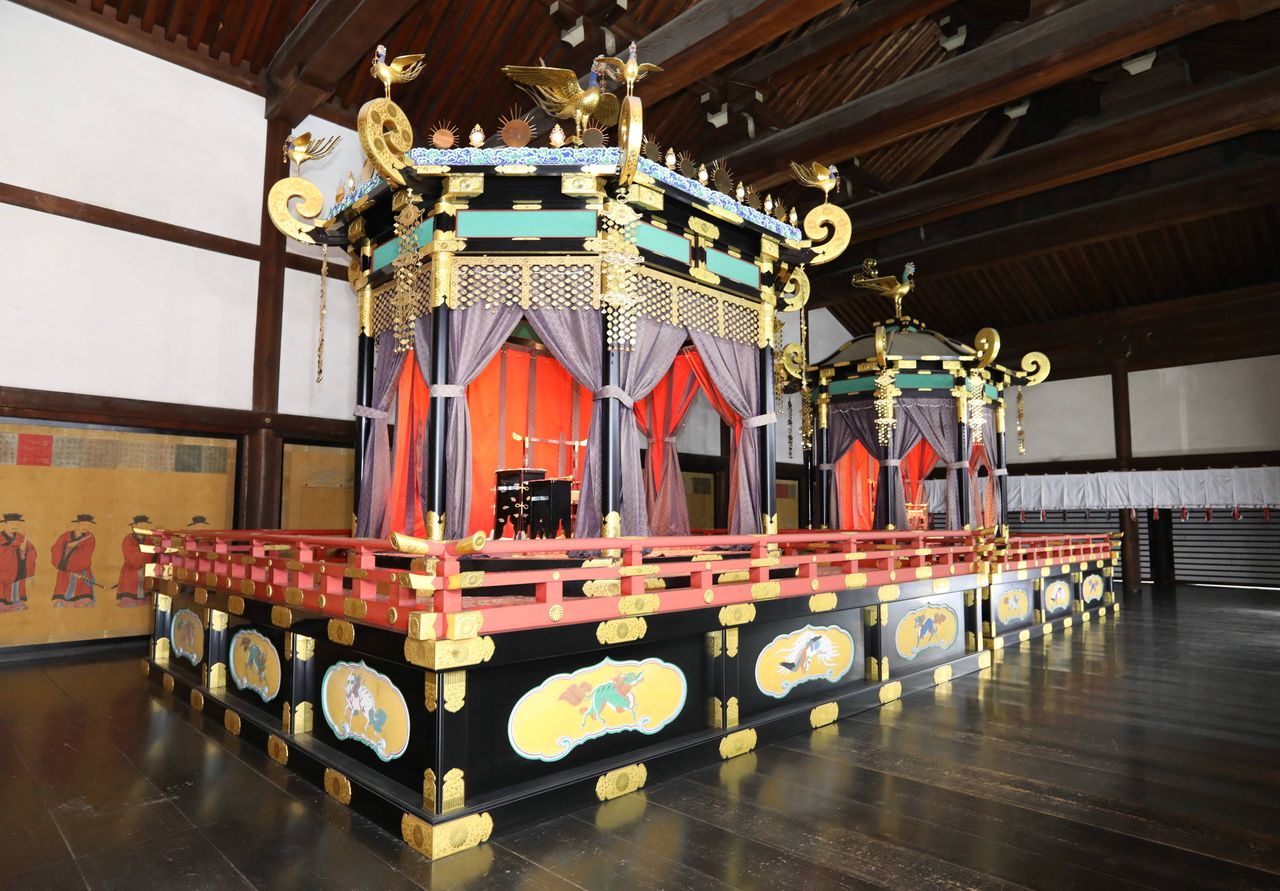 The emperor will wear a black ryūei-no-kanmuri headpiece and a sokutai dyed reddish-brown with the fruit of the haze (wax tree). The color is said to be that of the sun at its highest point in the sky. Crown Prince Fumihito will wear the same dark orange robe worn by his elder brother Naruhito when he was crown prince in 1990.

Empress Masako will wear an elegant jūnihitoe outfit, as will other female members of the imperial family, although in different colors. There will be a strongly traditional aspect to the ceremony, although taking into account that some members of the family are quite elderly, they can choose to wear Western clothing rather than the heavy Japanese garb. 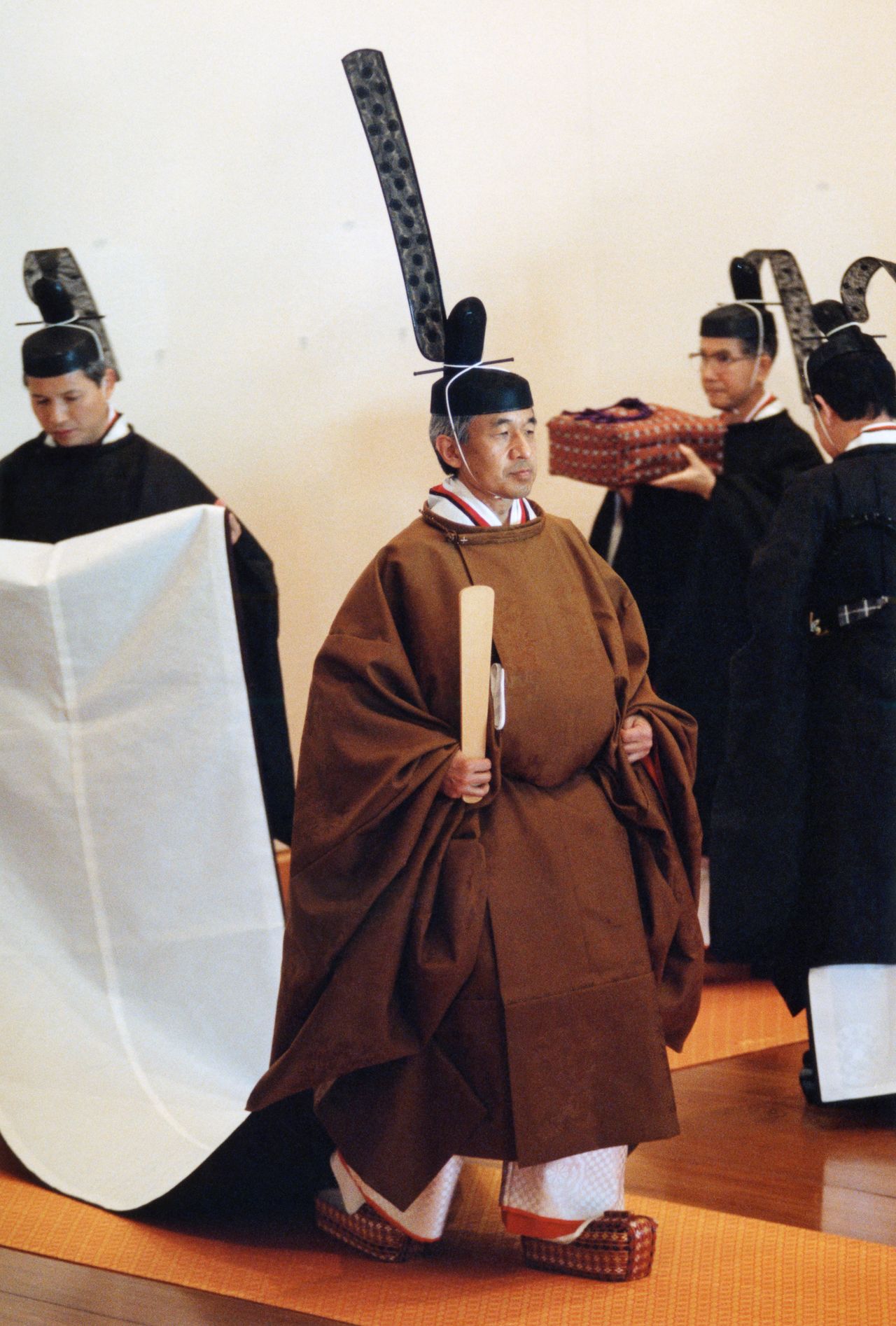 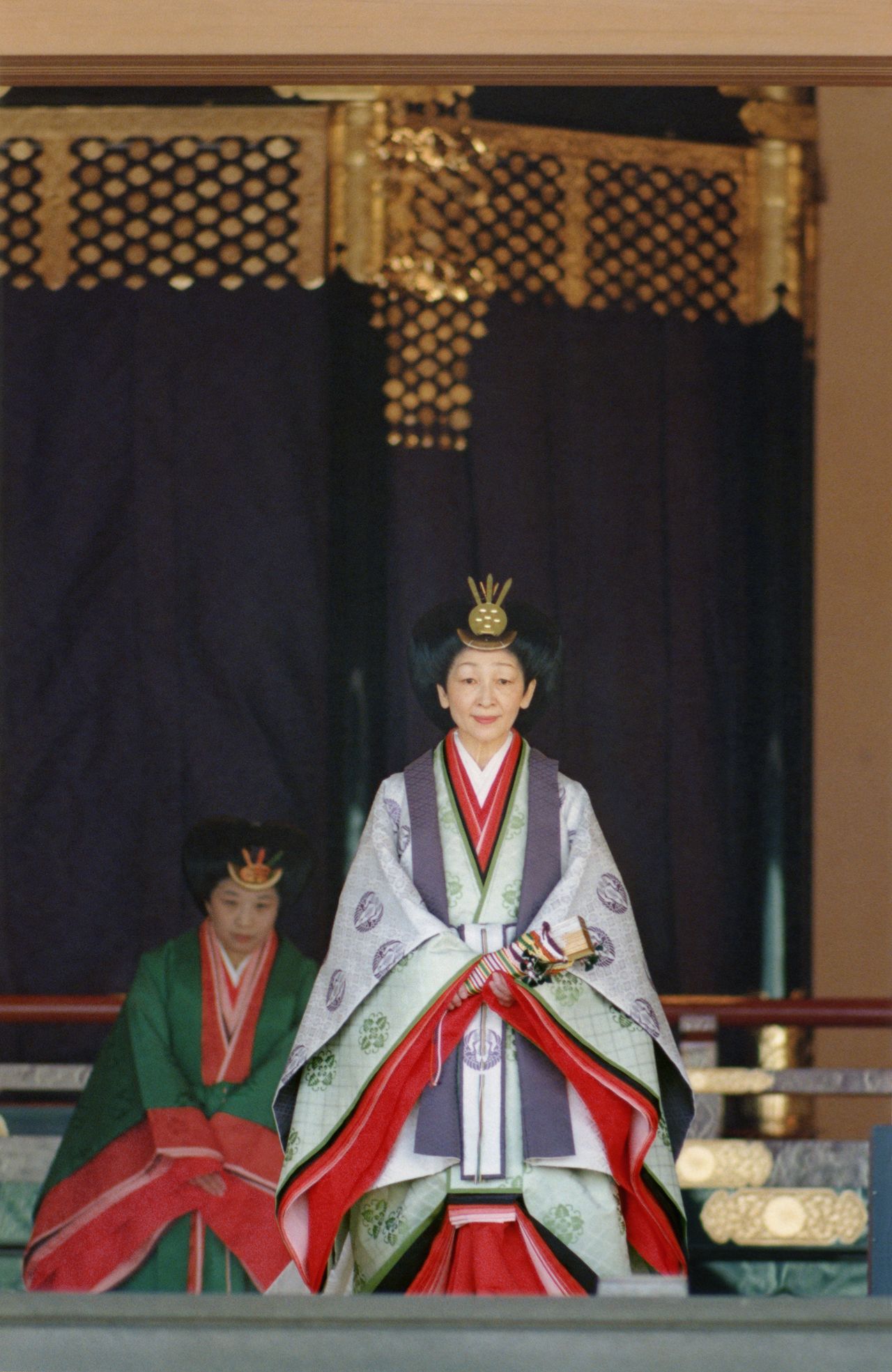 Empress Michiko holds a fan at the enthronement ceremony on November 12, 1990. Her hair is in the elaborate osuberakashi style. (© Jiji) 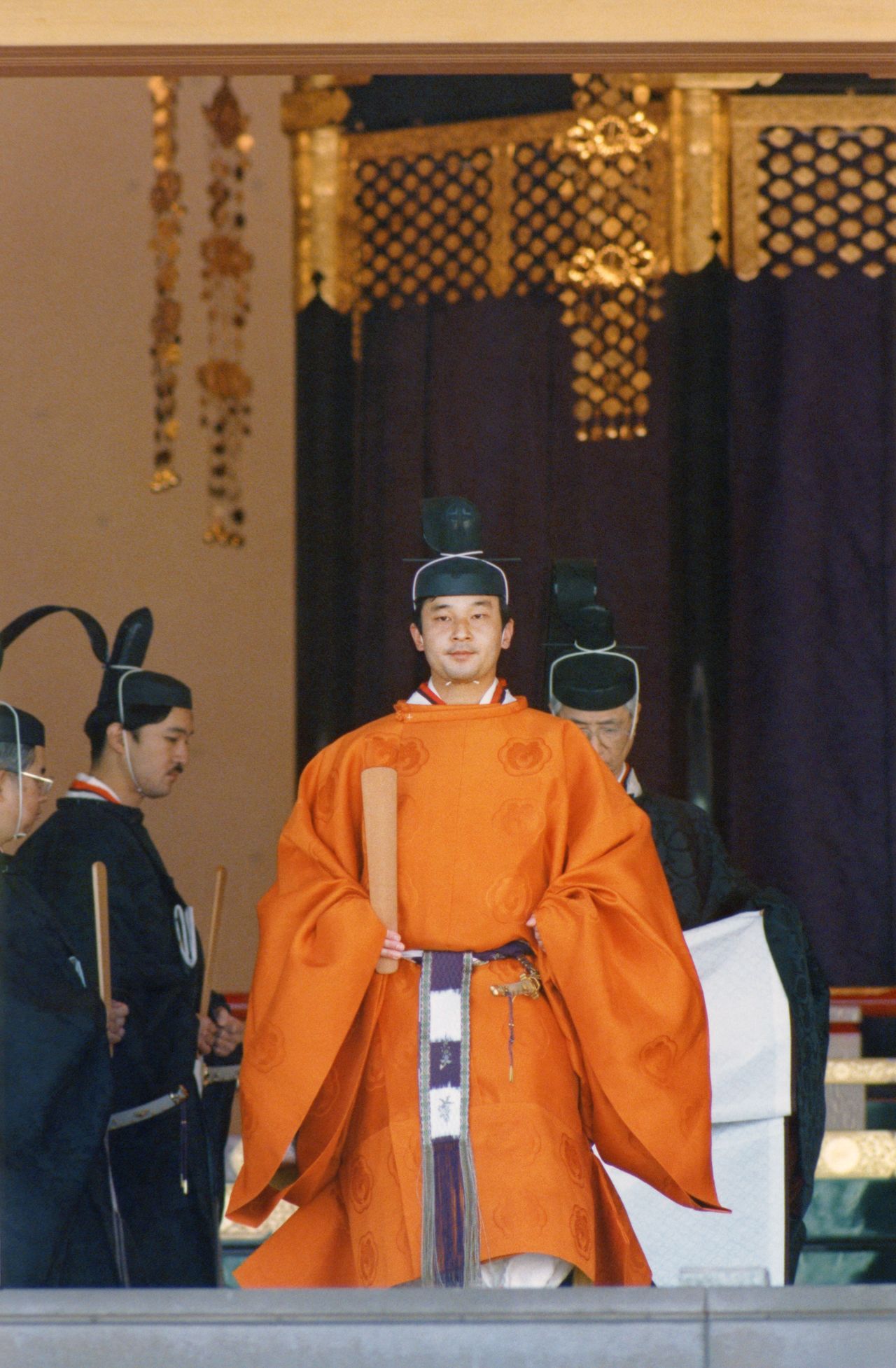 In the Imperial Palace’s central courtyard, 26 banners essential to imperial ceremonies will fly, including one with the characters for “banzai” embroidered with gold thread and those displaying the sun, moon, and chrysanthemum crest. Before World War II, crests of legendary creatures appeared at the enthronement ceremony, but these were removed in the first postwar ceremony in 1990.

Members of the Imperial Household Agency will line up in traditional dress in front of the banners carrying ceremonial items like swords, bows, and shields. 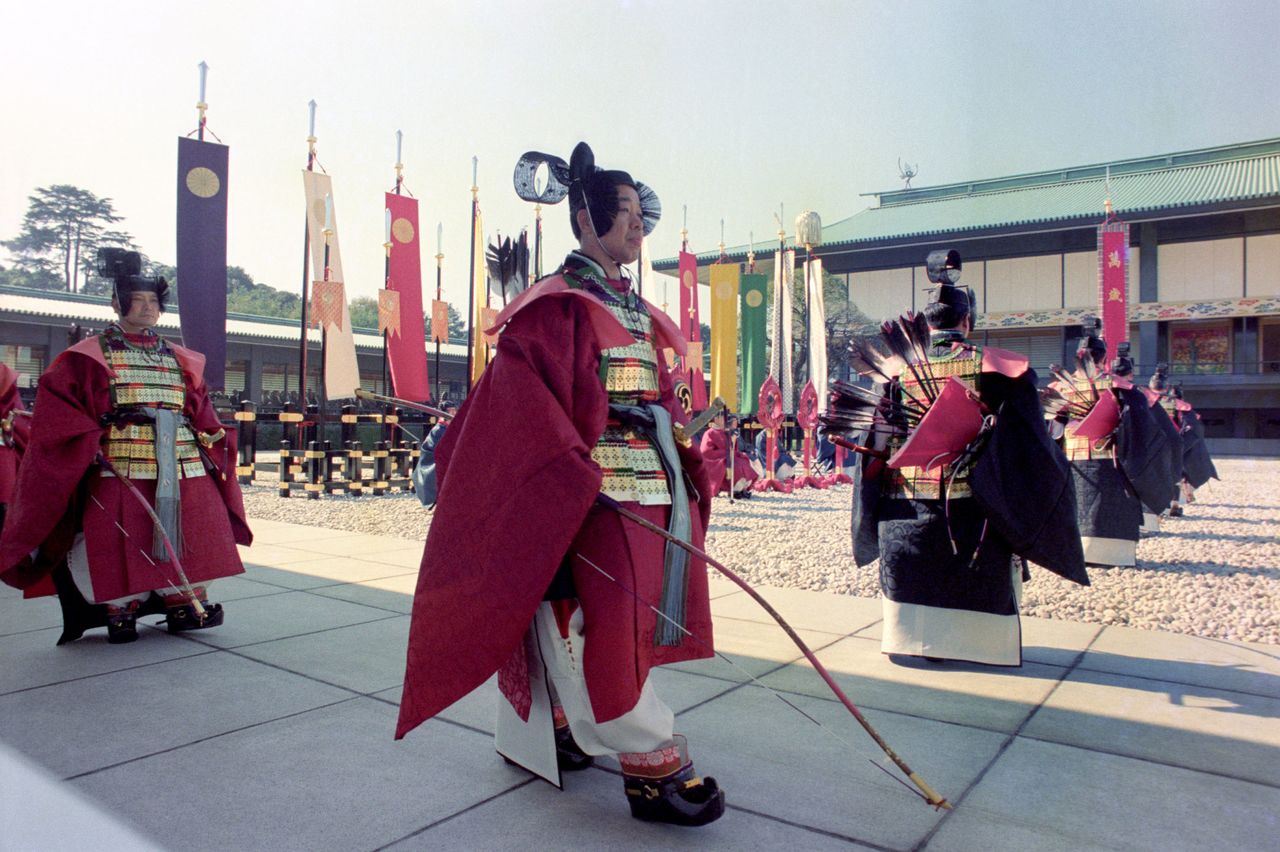 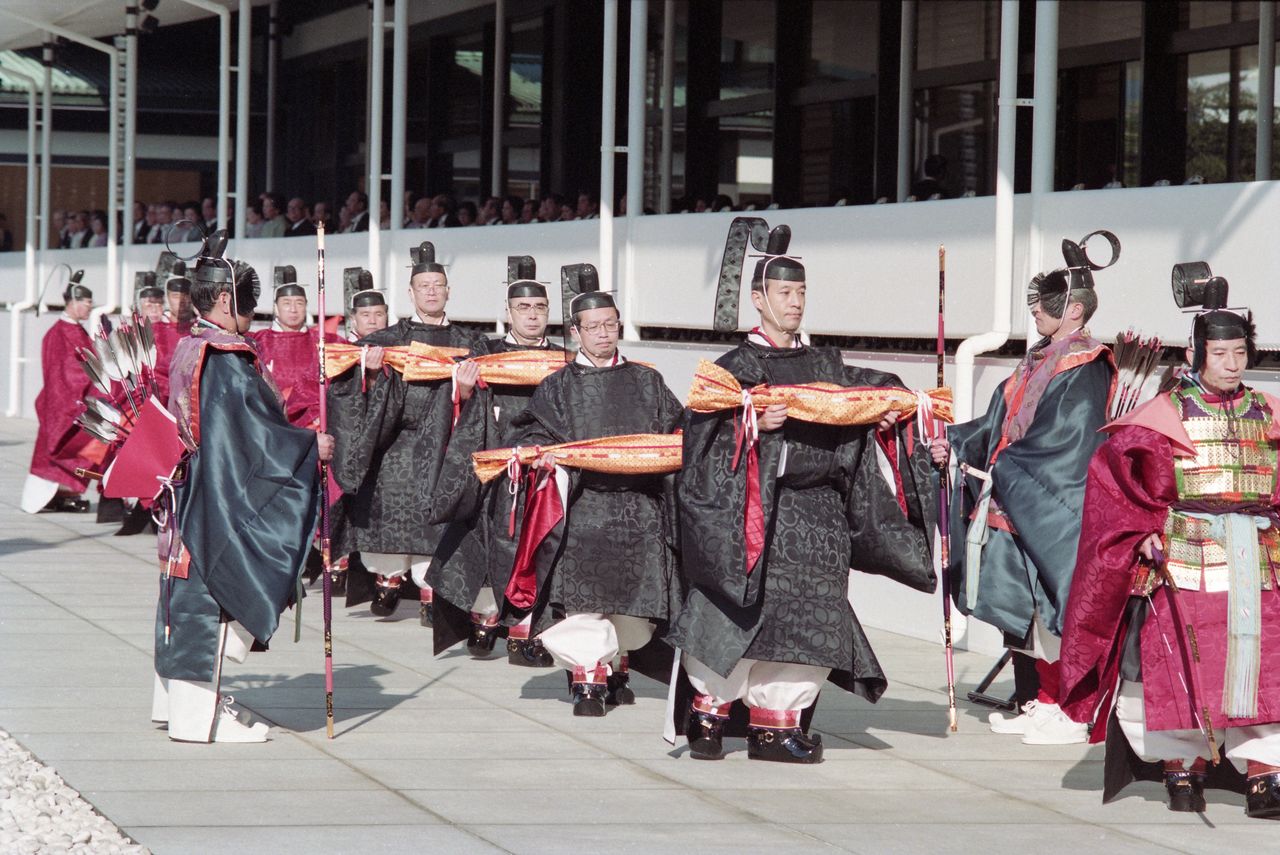 Almost a quarter of the 2,500 guests are dignitaries from overseas, such as Prince Charles of Britain and Chinese Vice President Wang Qishan. They represent almost 200 countries, 30 more than at the 1990 ceremony. A total of 30 large monitors will be set up in various halls in the palace to make it easy for guests to follow proceedings. 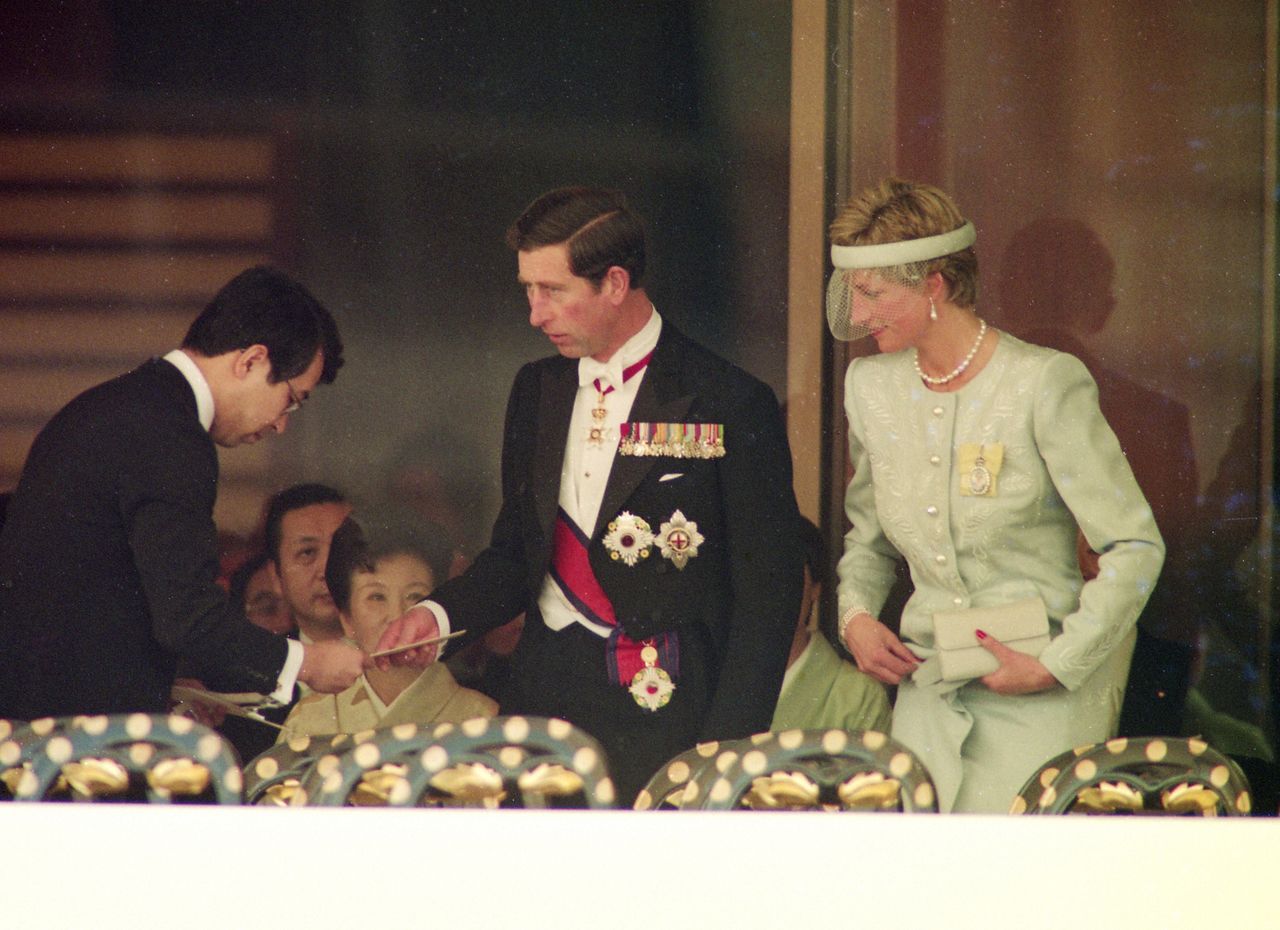 Prince Charles and Princess Diana of Britain at the 1990 enthronement ceremony. (© Mainichi Shimbun/Aflo)

A gong in the courtyard will signal when guests should stand, and the curtains to the Takamikura and Michōdai will open. Then, at the sound of a drum, the guests will bow. Prime Minister Abe will approach the Takamikura and Emperor Naruhito will speak.

Emperor Taishō was the first imperial leader to read a statement on his succession. In 1990, the speech for the occasion was simplified, removing literary Chinese vocabulary. 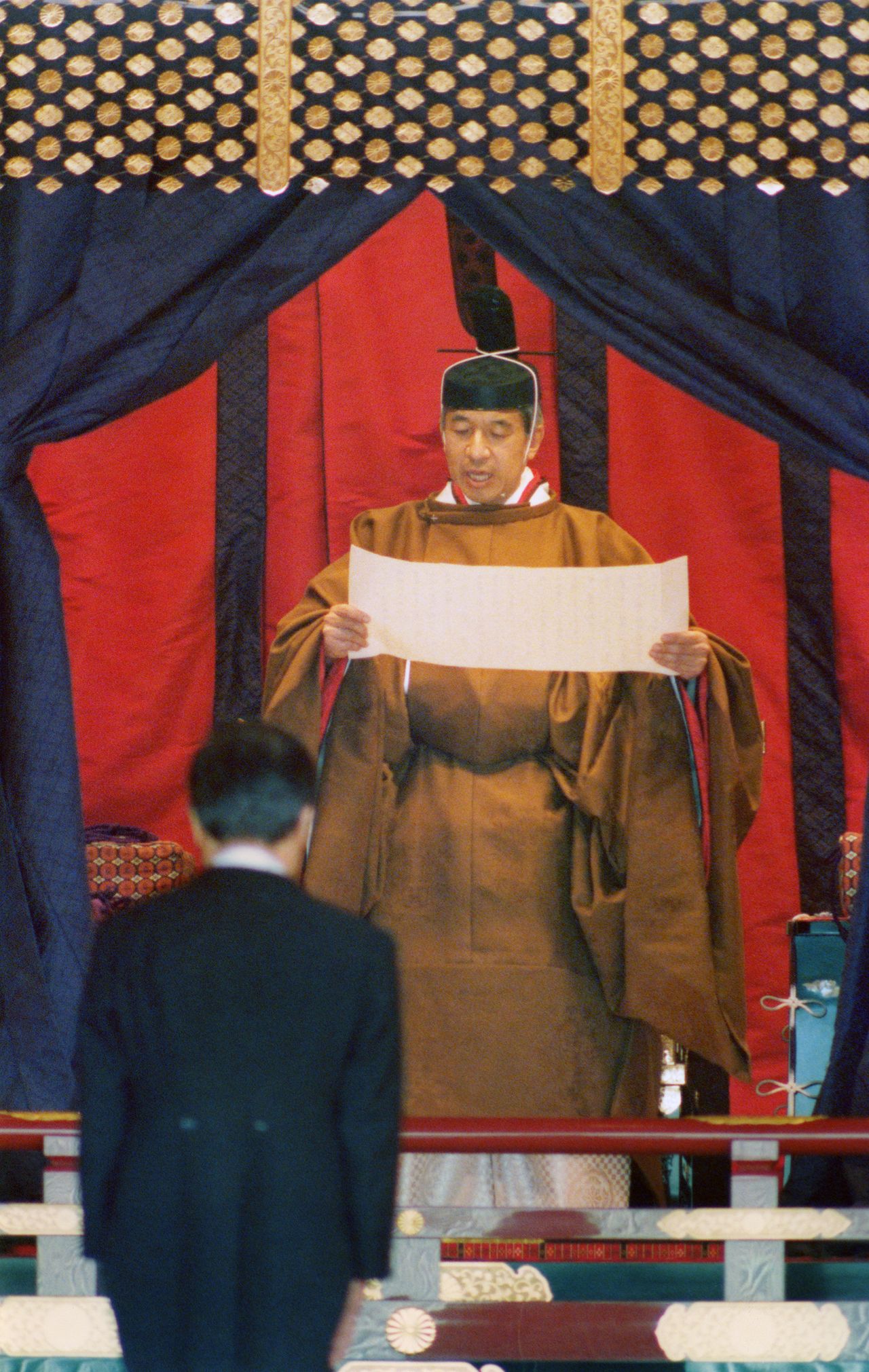 Emperor Akihito makes at a speech at his 1990 enthronement ceremony. (© Jiji)

Prime Minister Abe will make his speech next and lead the guests in cries of “Banzai!” In the 1928 enthronement ceremony of Emperor Shōwa, Prime Minister Tanaka Giichi wore traditional robes and stepped down into the courtyard to face the emperor when he said “Banzai!” However, Prime Minister Abe will wear a tailcoat as for other formal state occasions and make his congratulatory speech and cry “Banzai!” from the Matsu-no-ma. Foreign guests will not be expected to take part in the cheers. 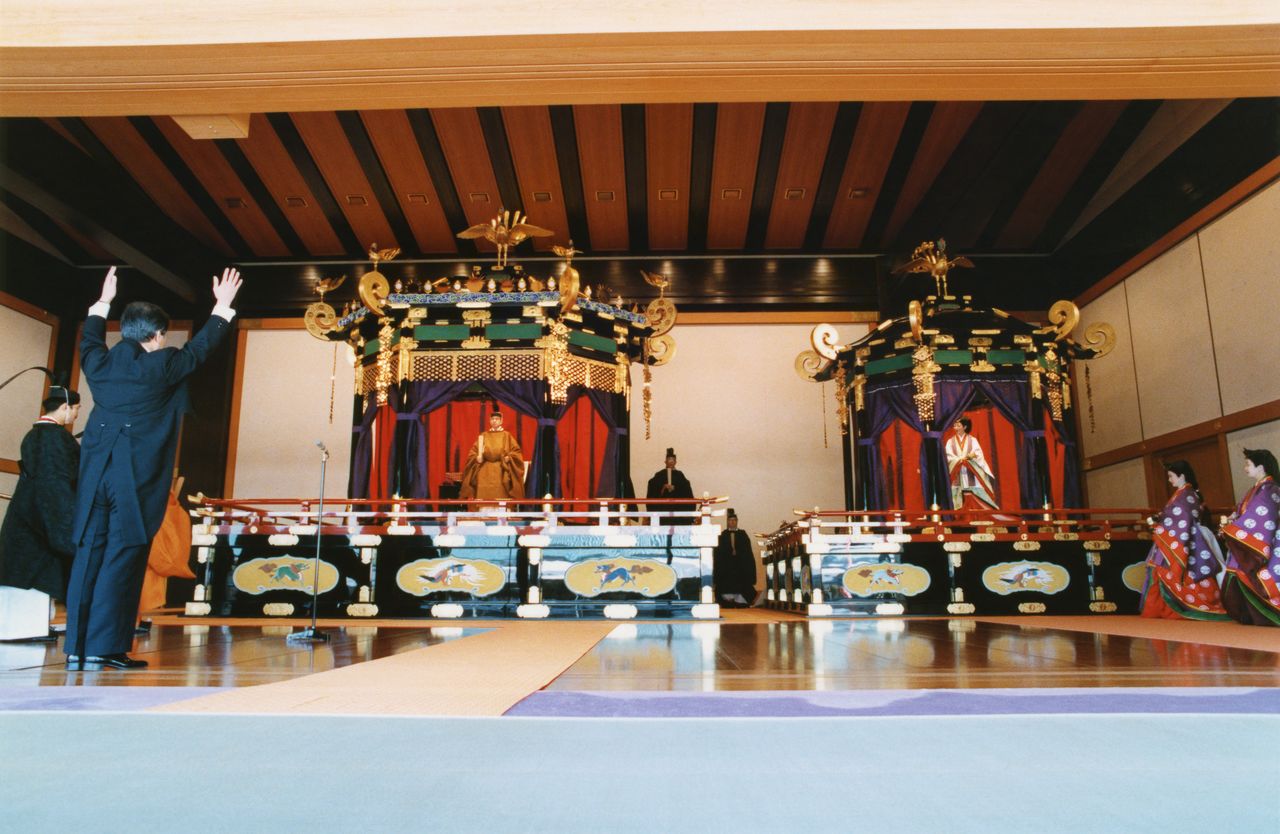 A Procession Across Tokyo

After the ceremony at the Imperial Palace, the royal couple were to then ride in a luxury convertible on a 4.6-kilometer procession between the palace and the Akasaka Estate, but the government postponed the parade until November 10 out of consideration of those affected by the powerful Typhoon Hagibis that hit Japan October 12, causing severe flooding across parts of central and eastern Japan. 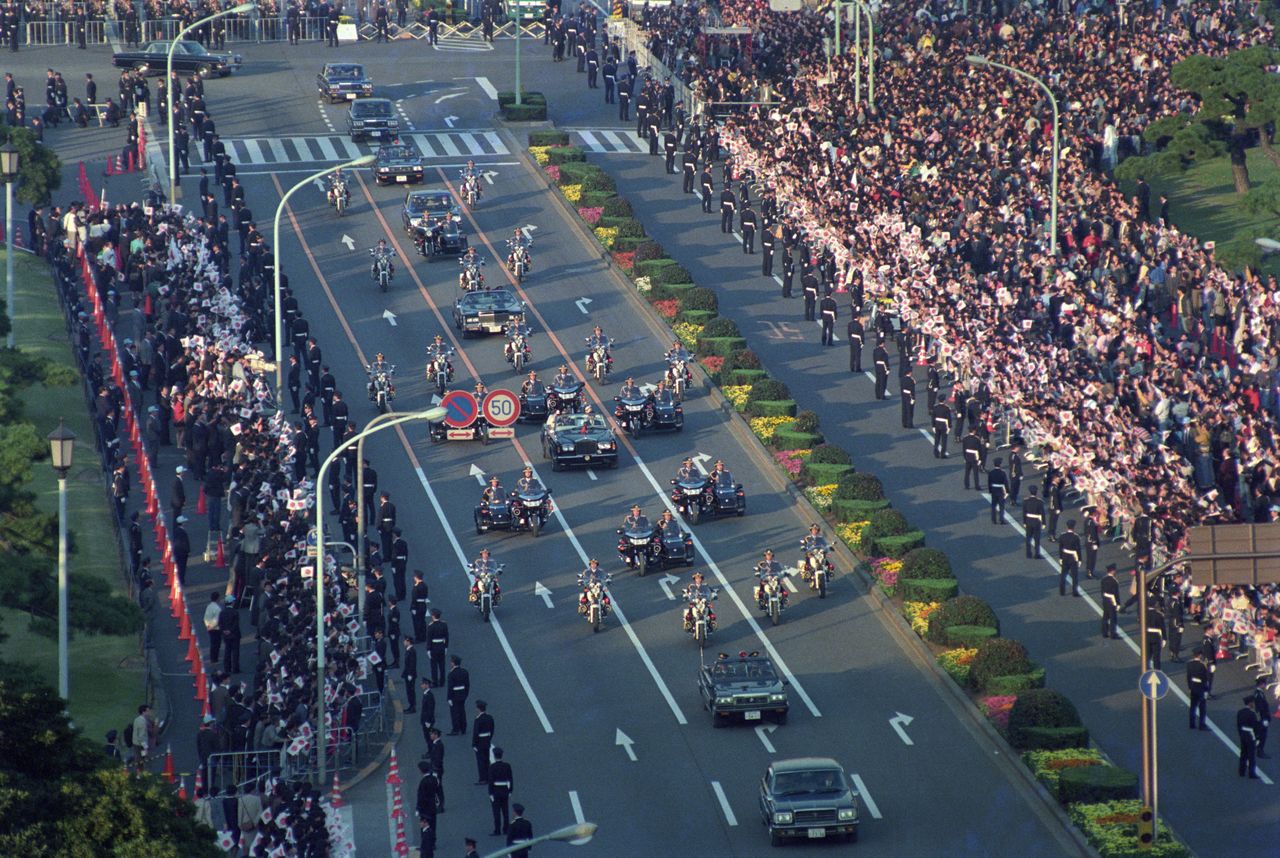 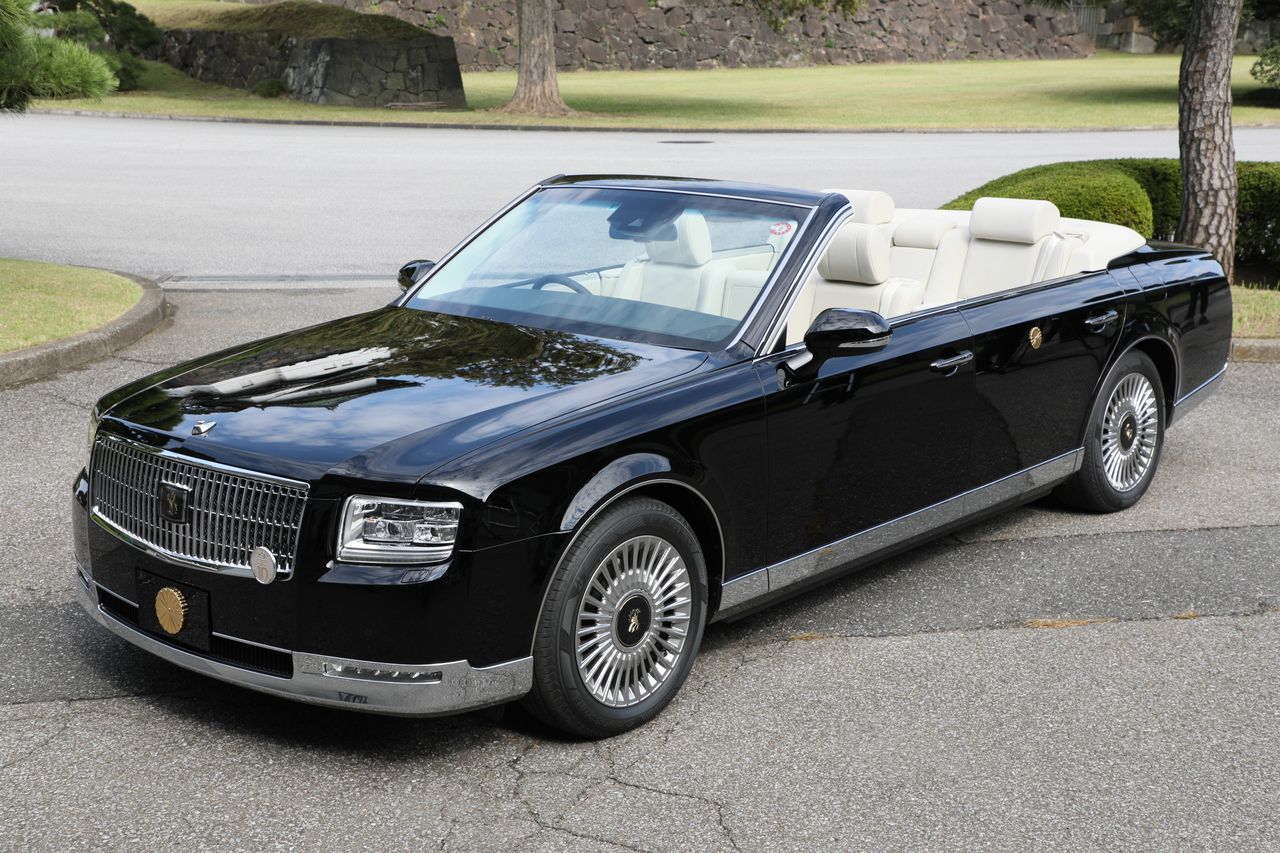 A specially revamped Toyota Century convertible will carry the imperial couple for their November 10 procession. (© Jiji) 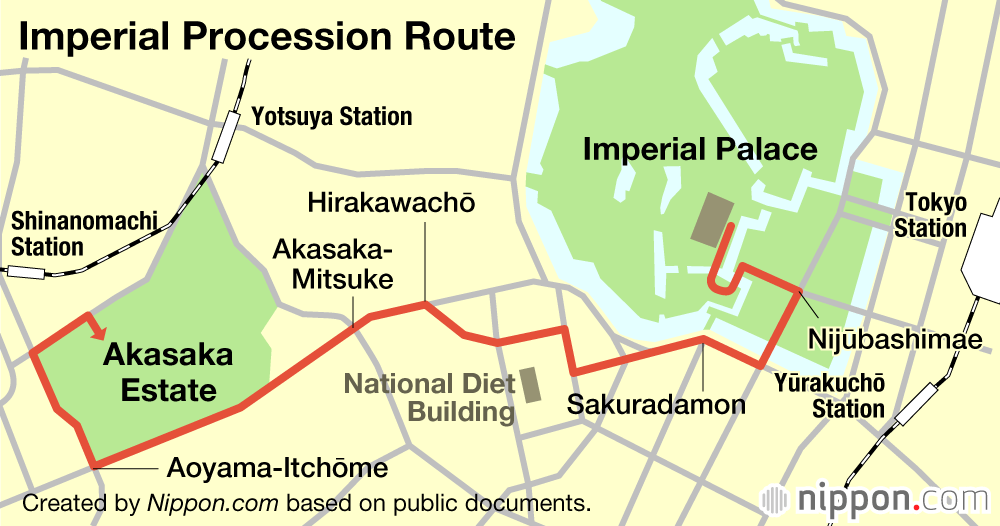 In the evening of October 22, a banquet will be held for foreign dignitaries and a handful of Japanese guests. The foreign guests will be able to see the Takamikura and Michōdai in the Matsu-no-ma before entering the dining room. The menu is set to be washoku with Western-style seasoning, and gagaku classical court music will be played during the meal.

The imperial couple will then retire with the foreign guests to another hall for after-dinner drinks.

There will be further state banquets on October 25, 29, and 31, for enthronement ceremony guests. This is a reduction from the total of seven banquets held over four successive days in 1990. 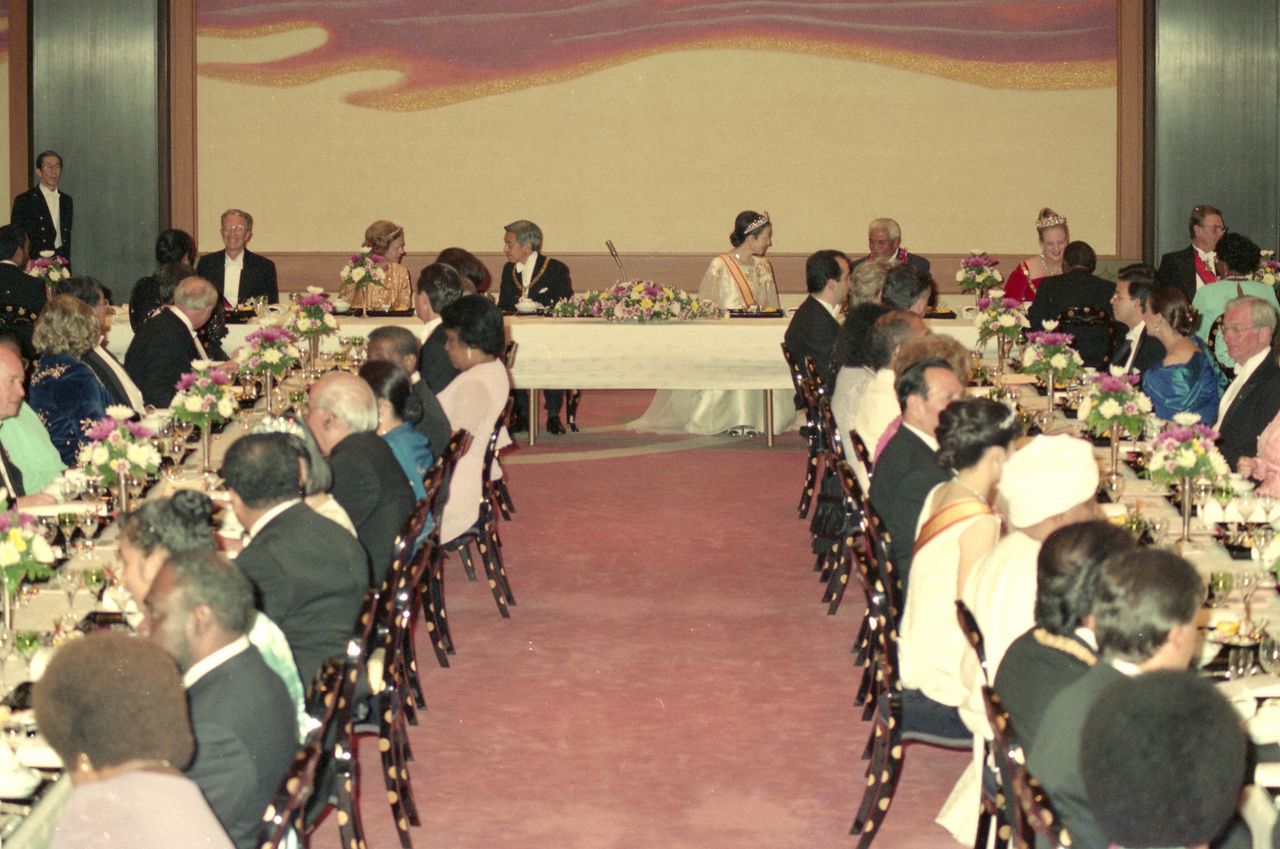 An imperial banquet on the day of the 1990 enthronement ceremony. (© Mainichi Shimbun/Aflo)

(Originally published in Japanese on October 15, 2019. Banner photo: Gongs, drums, banners, and people in traditional costume line up in the central courtyard of the Imperial Palace for the enthronement ceremony of Emperor Akihito on November 12, 1990. © Mainichi Shimbun/Aflo.)