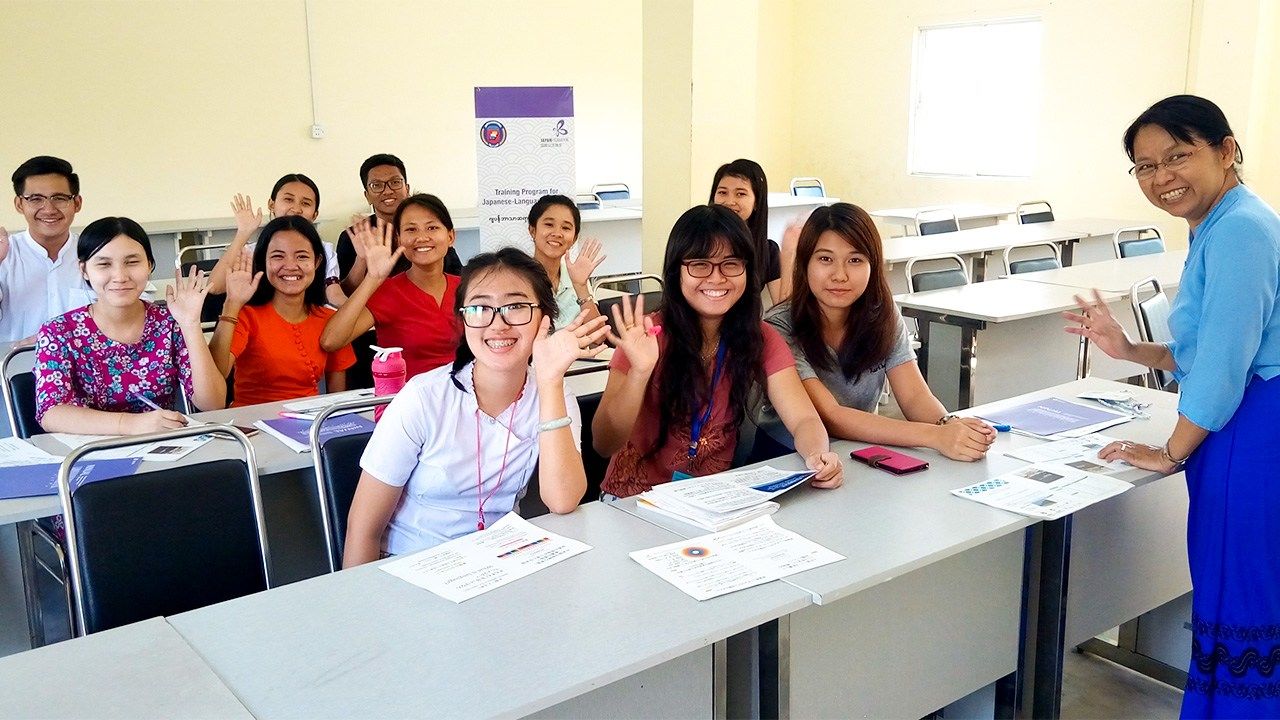 A Wave of Enthusiasm for Japan in Myanmar

Politics World Jul 23, 2019
Japanese culture, including anime and movies, is currently enjoying a wave of popularity in Myanmar, particularly among the youth, and there is a sharp rise in people learning Japanese.

Japan enjoys favorable relations with many countries worldwide. Due to its proximity to China and the Korean Peninsula, it is easy to gain an impression of anti-Japan sentiment, resulting from historical and territorial issues. But in fact, Japan has positive relations overall with the great majority of countries.

Among these countries, one that stands out in particular for me is Myanmar, which I was recently able to visit. Now, the two countries are linked with daily direct flights, and there is much interest in investment by Japanese companies. But coverage of Myanmar in the Japanese media mainly relates to State Counsellor Aung San Suu Kyi and the Rohingya crisis. The pro-Japan sentiment of the Burmese people receives little attention.

In January and February 2019, a Japanese film festival was held in Yangon, Myanmar’s commercial capital, and Mandalay, its cultural capital. It screened recent Japanese films including an entry in the Chihayafuru series, Her Love Boils Bathwater, Honnōji Hotel, and the hit anime In This Corner of the World. Event organizers were surprised at the popularity, with over 20,000 attending, double the numbers from last year.

The people of Myanmar have an appetite for Japanese culture. The Japan Foundation organizes events and classes in Yangon. The most popular are lessons in how to wear yukata, with reservations filling up in no time.

There has been a sudden surge in people learning Japanese due to their interest in anime and other aspects of the country’s culture. Yangon alone has over 300 Japanese language schools. The number of people sitting the Japanese Language Proficiency Test is increasing at a rate of 50% annually, with Myanmar now placed fifth worldwide in number of examinees, after China, South Korea, Taiwan, and Vietnam. 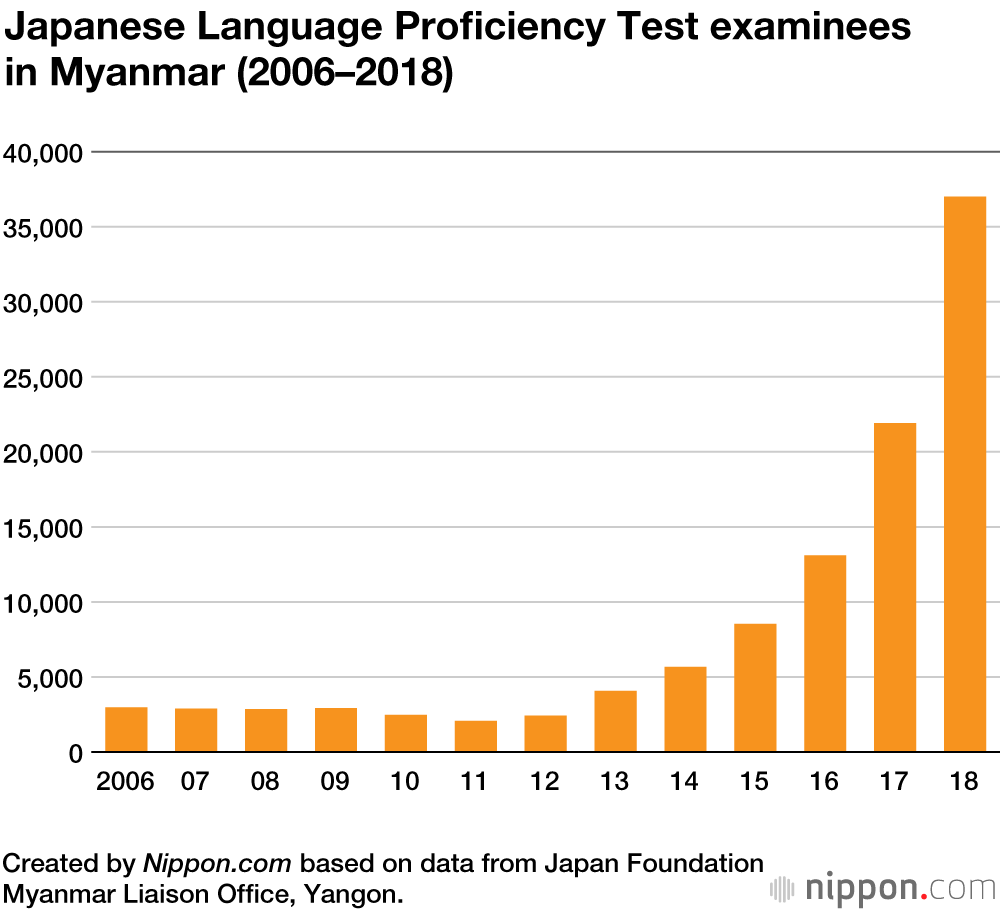 “In 2011, following the transition from military to democratic rule, Japan boosted its investment and presence, leading to increased enthusiasm for Japanese studies in Myanmar. Young people became interested through anime, and the population has a more straightforward interest in Japan compared with some Japanophiles in the West, who become obsessed with narrower aspects of the culture.”

The Japan Foundation is focusing on the development of people capable of supporting Japanese education in Myanmar, rather than in teaching the language itself, for which private infrastructure is already in place. It has established a Japanese language teacher development program at Yangon University of Foreign Languages, targeting fourth year students preparing for employment and the general public. 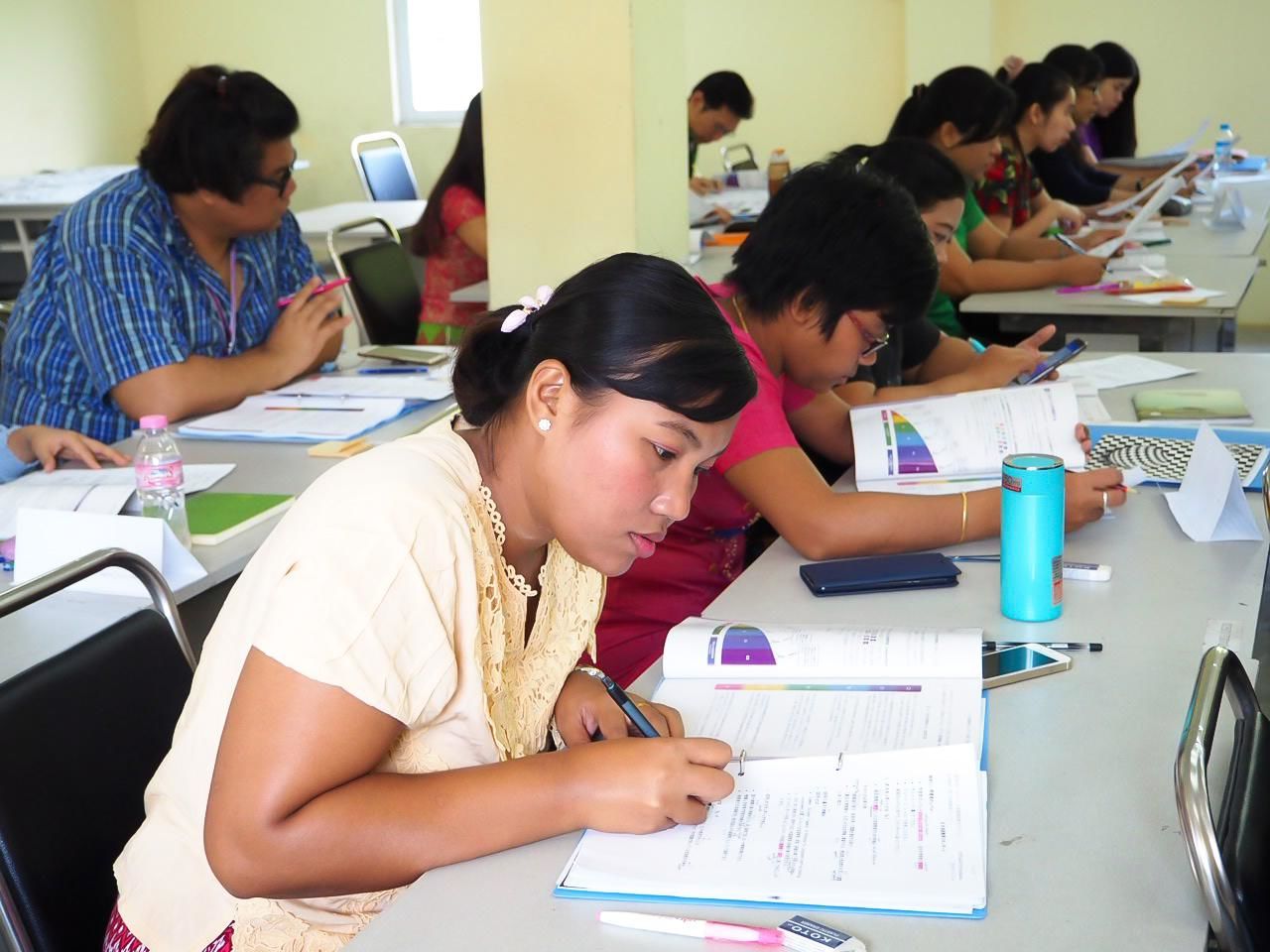 Satō explains that, “Alongside interest in the culture, Japanese brands have earned deep trust. Japanese cars in particular have gained overwhelming popularity.”

This is no longer the case in many other countries, where manufacturers from South Korea and elsewhere are making inroads in former Japanese strongholds. In Myanmar, there is not even a whiff of this in the air.

Yangon suffers from heavy traffic congestion. As incomes increase, more people want their own cars, but road construction is struggling to keep abreast of the rise in vehicle numbers. This is a common phenomenon in countries undergoing growth just before their economy takes off. City travel is certainly frustrating, but Myanmar also has a dynamism that springs up from its core.

Observe the traffic congestion closely and one will notice that around 70 or 80% of the vehicles are Japanese. Influenced by Britain, Myanmar previously drove on the left-hand side of the road, but later switched to the right. Nevertheless, most of the vehicles are used right-hand drive cars imported from Japan. The most popular among them by far are Toyota. There is a saying in Myanmar that 90% of the cars are used, of which 90% are Japanese, of which 90% are Toyota. 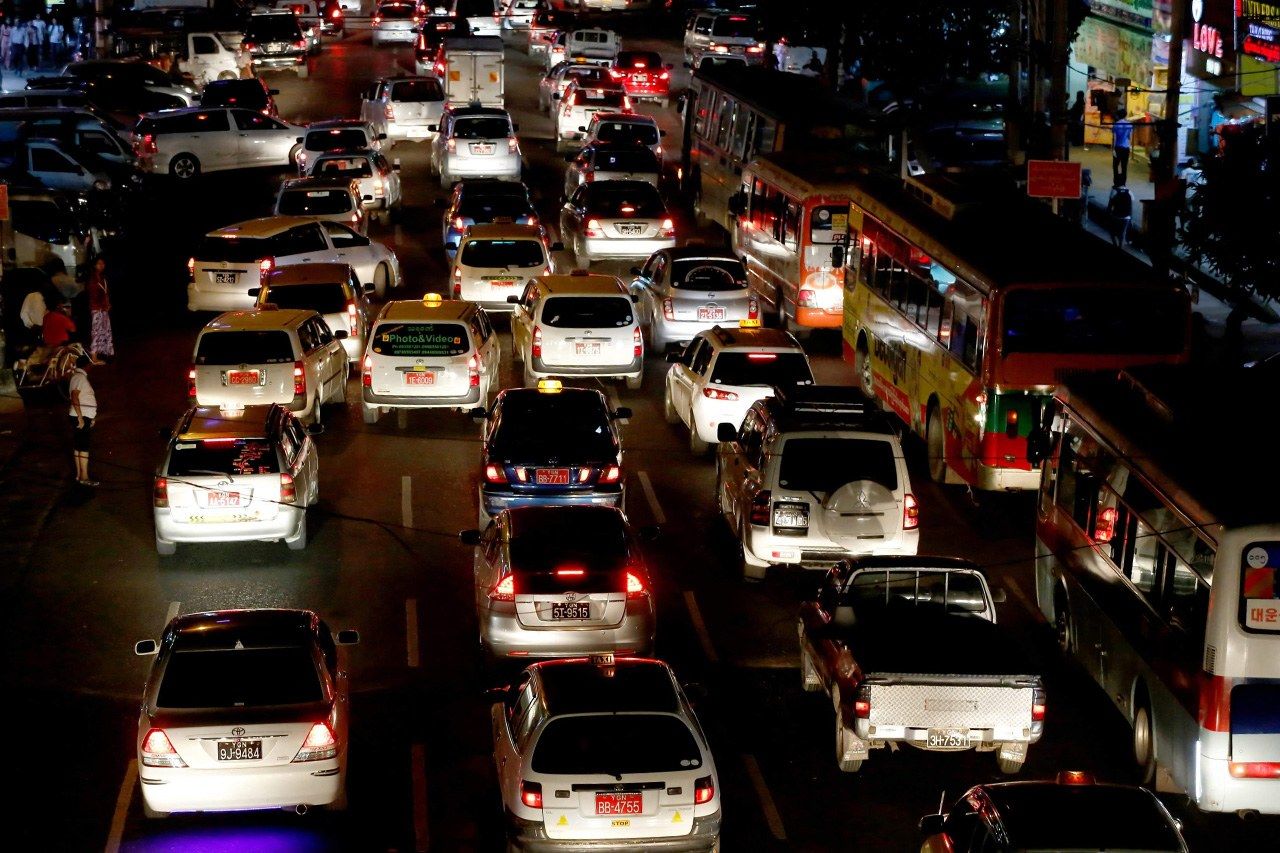 Although Toyota hopes to grow its new vehicle sales, its used-vehicle sales remain unshakable, as it ends up competing with itself. Toyota was also the preferred car for leaders of the military junta when it was in power. Quite a few exchange students have made their fortunes in the Japanese used-car business in Myanmar after coming back from Japan.

Recently, Myanmar’s government passed measures outlawing the import of right-hand drive vehicles. This could be the beginning of the end of the virtual monopoly for Japanese cars. However, Suzuki seized the opportunity offered by the high regard for Japanese vehicles to launch its Swift model on the Myanmar market in 2018. The company has secured a 50% share in the new car market with its left-hand drive cars manufactured at two plants in Thilawa, just outside Yangon.

History that Bonds the Two Countries

The countries’ shared history underpins the present trust in Japan. During World War II, Japanese forces fought in the Battle of Imphal and other military engagements in what was then known as Burma. Historical issues often create a barrier in efforts to establish harmonious relations between nations, but with Japan and Myanmar, they seem to have actually helped to forge bonds.

We visited the Japanese cemetery at Aung Mingalar, in the outskirts of Yangon, an hour’s drive from the city center. It was constructed in 1998 through the relocation and amalgamation of two older Japanese cemeteries. It is managed by the local Japanese association, but attentively maintained and cleaned by Myanmar family members, who take care of the remains of the hundreds of souls resting there.

There were many Japanese living and working in the country prior to the war. But the cemetery is also the final resting place for tens of thousands of casualties from the Burma Campaign.

The Japanese Association’s officer for general affairs, Ikeya Osamu, explains that, “Historically, Yangon stood alongside Saigon (present-day Ho Chi Minh City) as one of Asia’s most advanced cities, and Japanese trading houses dispatched hundreds of employees to work here. The cemetery was constructed thanks to Japanese government subsidies under former Prime Minister Nakasone Yasuhiro. Each year, many family members visit from Japan during Myanmar’s dry season to pay their respects.” 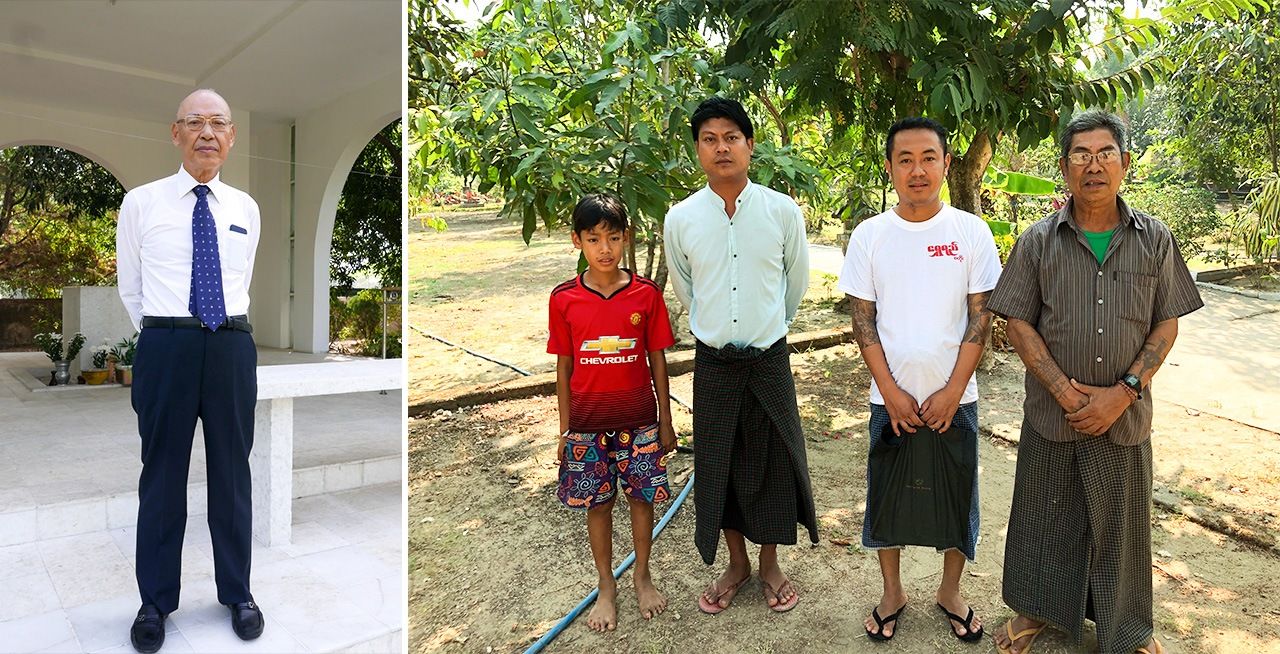 One headstone in the cemetery only has a given name, “Karayuki-san.” There are also many memorial stones erected by prefectures in western Japan (Chūgoku, Shikoku and Kyūshū), owing to the large number of soldiers from these regions who lost their lives in the Burma Campaign. There is also a peace monument inscribed with the name of Nakamura Kazuo, the model for Private Mizushima, protagonist in the Japanese novel Biruma no tategoto (Harp of Burma), by Takeyama Michio. There is also a memorial relating to Ahlone internment camp, where the British held Japanese POWs after the war.

There are Japanese cemeteries throughout Asia, but it is unusual to encounter such a diversity of Japanese and Asian history in one location.

Ikeya, resident in Myanmar for 50 years, has paid close attention to local attitudes towards Japan, and explains the mutual affection between the two countries thus.

“Most of Japan’s soldiers were from rural backgrounds, and it is likely that locals who had contact with them developed a good impression of the Japanese. Furthermore, they had been made to think that Asians were inferior by the British, thus the postwar development of Japan came as a surprise, leading to an even greater admiration for Japan.”

Nay Myo Chow (aged 41), my interpreter, who has worked in Japan for five years, praised the Japanese, saying that Myanmar people thought they were less forceful and therefore easier to get along with than Koreans or Chinese.

Maruyama Ichirō, the first Myanmar language expert to become Japan’s ambassador in Myanmar, describes the similarity in values of the two countries thus.

“The affinity between the countries is largely thanks to the shared common understanding of Japanese and Myanmar people. There is no definitive difference between the cultures of the two. Anade is a Burmese term referring to personal restraint that closely corresponds to the Japanese word enryō. I don’t believe that there are many other countries with a concept like enryō.”

Proliferation of Good Will and Gratitude

In addition, the clinching factor in Myanmar’s positive attitude towards Japan is the constructive nature of relations between the two countries.

The first country with which Japan reached agreement on reparations after World War II was the (then) Union of Burma, in 1954. This milestone probably enabled smoother reparation negotiations with the Philippines and other Asian nations.

Baluchaung Hydropower Plant, constructed as the first reparation project, was also a recipient of subsequent overseas development assistance from Japan, and still supports Myanmar’s electricity supply, standing as a symbol of goodwill between the two countries.

One reason behind the popularity of Japanese vehicles in Myanmar is said to be the supply, under reparations and assistance programs, of large numbers of Japanese pickup trucks, which made a deep impression for their sturdiness and sound performance.

There was a precedent to the initial reparation. Shortly after World War II, when Japan was suffering food shortages, the Union of Burma, newly independent from Britain, supplied Japan with cheap rice imports. Some of Japan’s older generation remember having their hunger satisfied thanks to Burmese rice.

The assistance which Japan offered Burma in obtaining independence from Britain has also certainly left an impression. However, there is a dark side to the history between the countries. During World War II, Japan forcibly mobilized many Burmese into construction of the Thai-Burma Railway, the hardship of which is said to have resulted in “one death for every sleeper laid.”

However, there are also many stories of Burmese people providing food for Japanese forces escaping British troops after defeat in the Battle of Imphal.

Without a doubt, many Japanese have worked to express their gratitude for such kindness in the years following the war.

In addition, the Japanese government has adopted an attitude of engagement with the country throughout its postwar history, through independence, the military junta and the return to democracy, unlike Western countries that imposed sanctions. Through continued economic support, Japan has maintained a pipeline between the military government and democratic forces. This is another factor behind the constant presence of Japan in the minds of the Myanmar people.

In 2017, Japan’s Ministry of Foreign Affairs conducted an opinion poll of the 10 ASEAN nations, in which people in Myanmar responded that their most trusted country was Japan (34%), significantly ahead of the USA (18%) and China (13%).

Speaking at a Japan-Myanmar amity event in February, State Counsellor Aung San Suu Kyi spoke positively of the current relations between the two countries in her opening remarks, saying that the two countries have achieved mutual understanding in spite of difficulties, and have assisted each other with compassion and affection. As a result, they have continued to enjoy an extremely intimate relationship to this day.

Goodwill ties have fostered the current relationship between the countries and have undoubtedly helped to create positive sentiment towards Japan in Myanmar. Japan must continue to be closely engaged with Myanmar in the future.