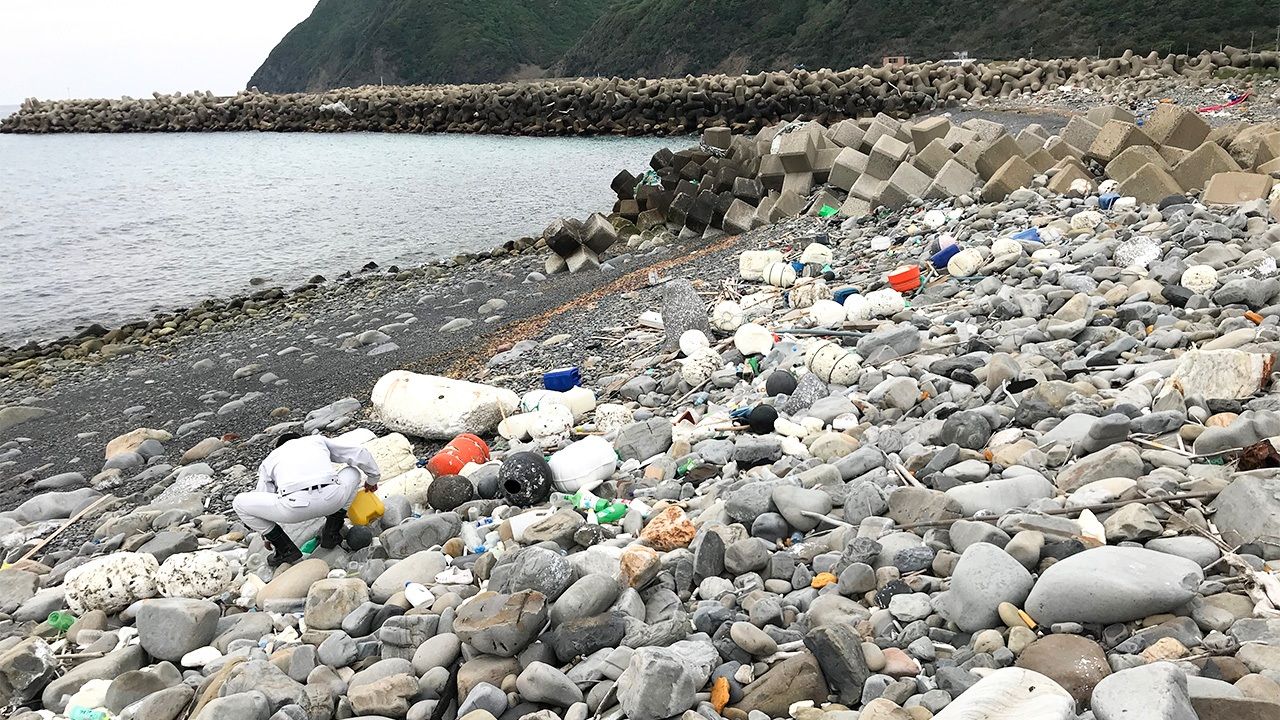 Society Environment Jul 2, 2019
Nagasaki Prefecture’s Tsushima, a group of islands near the Korean Peninsula, is surrounded by beautiful seas, but the same waters also bring an endless stream of debris. The community is confronting its own consumer habits along with the growing issue of marine plastics.

Floating in the swift waters that separate Japan and the Korean Peninsula, Tsushima is under siege by marine plastics. The strong currents of the Tsushima Strait sweep around the picturesque groups of islands, dumping tons of floating refuse—drink bottles, fishing nets, bits of polystyrene—along the rugged shoreline.

Evidence of the onslaught can be found at the main port, an oasis of blue hemmed in by the surrounding shimmering green hills. Near the docks where fishermen busily prepare vessels for launch sit some 60 large black bags filled with refuse.

In the past, the strategic location of these Nagasaki Prefecture islands—Korea’s Busan is just under 50 kilometers to the north and Kyūshū’s Fukuoka some 120 kilometers southeast—made Tsushima an important port of call for diplomatic missions and trade ships sailing to and from the mainland. Members of the Sō clan who governed the province from the twelfth to nineteenth centuries were influential in keeping up cross-strait relations, including bartering peace with the Joseon Dynasty (1392–1897) following warlord Toyotomi Hideyoshi’s unsuccessful invasion of Korea in the late sixteenth century.

Today, though, Tsushima and its black bags serve as a stark example of the far-reaching environmental impact of human reliance on plastics. 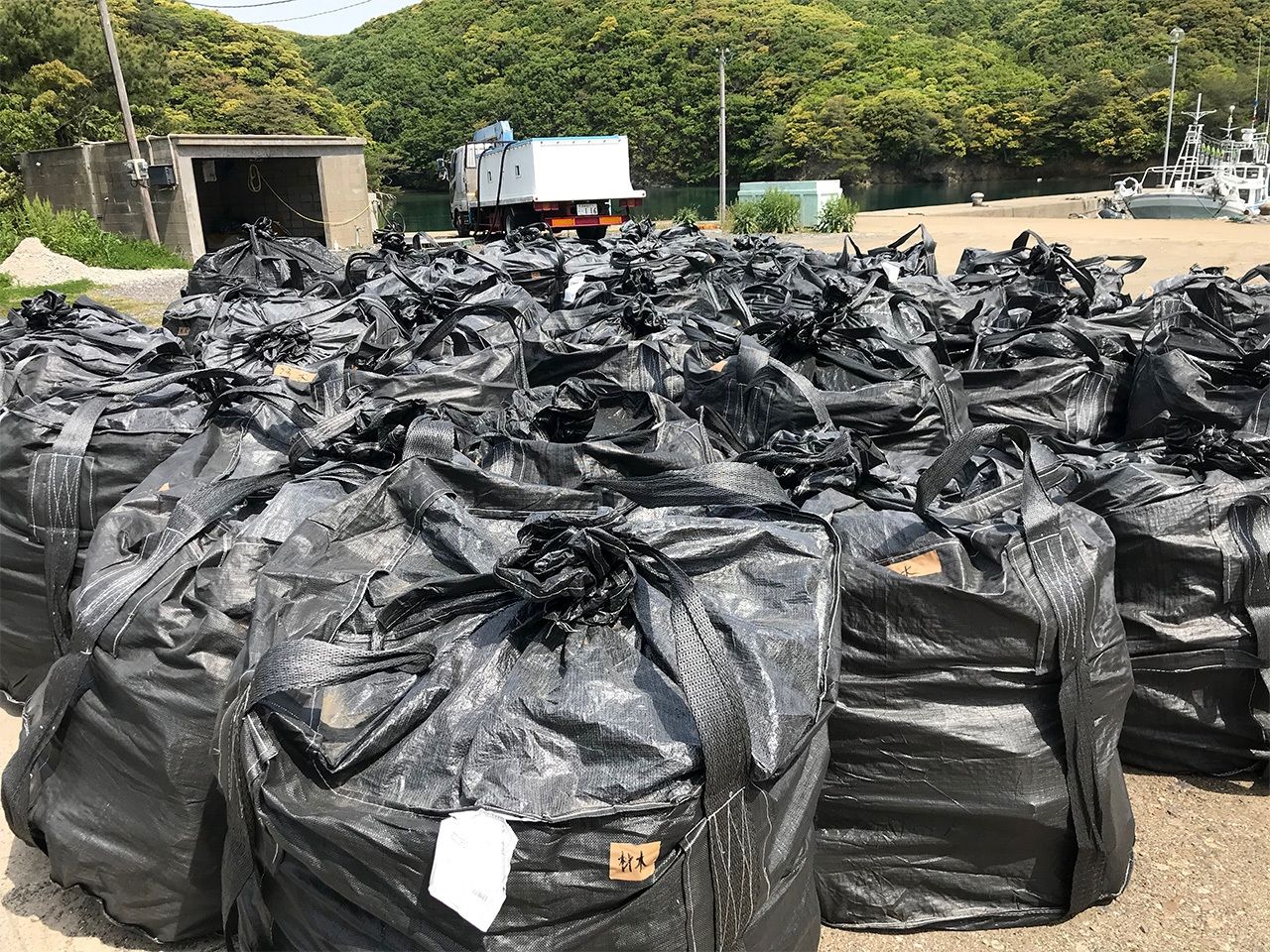 Bags stuffed with marine debris at a Tsushima port.

Increasing reliance on plastic products in the twentieth century led to more and more of the material ending up in the oceans. World leaders first started taking notice of the issue of marine plastic in the 1990s. Since then, scientific research and advocacy have increased awareness of the problem, but countries have yet to scale back their appetite for plastics in any significant way. This was illustrated by a 2016 World Economic Forum report shockingly predicting that at current consumption rates, by 2050 there will be more plastic than fish in the ocean.

Extremely durable, marine plastics float on the surface, ride the winds and currents to distant shores, and even sink to find their way to the deepest seafloors. Scientists have yet to fully understand the oceanic mechanisms distributing this pollutant, but there is broad consensus that rivers are the main conduits by which nonbiodegradable trash reaches the sea. 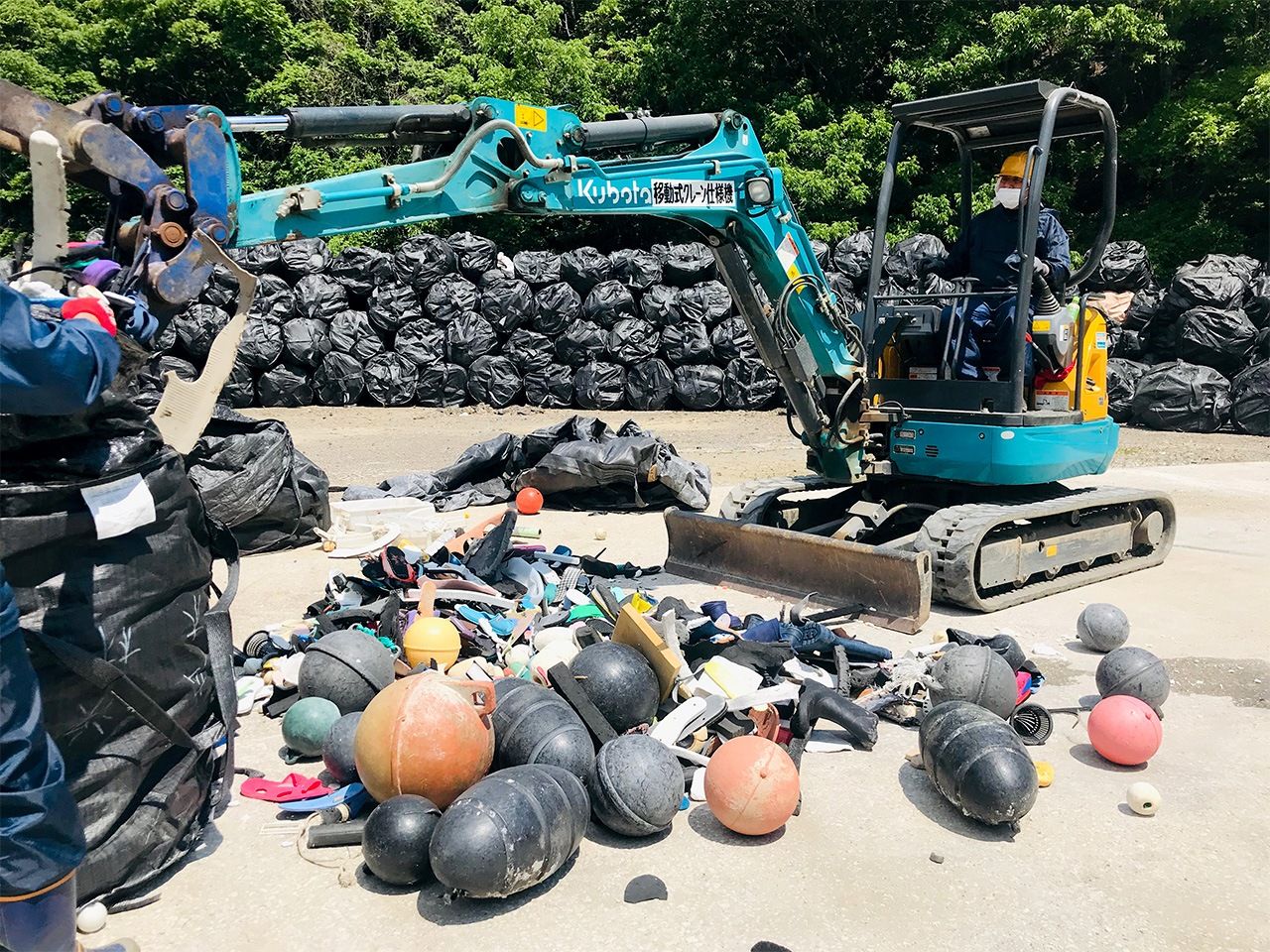 On Tsushima, a municipal council on marine debris estimates that between 12,000 and 15,000 cubic meters of trash reach the island each year, much of it nonbiodegradable. In 2018, authorities collected approximately 8,500 cubic meters of garbage, of which 35% was polystyrene, 30% wood, 20% plastic, and just under 10% rope and fish nets. It is hard to pin down the source of the garbage, but a 2016 Environment Ministry survey of plastic bottles collected around Tsushima showed that 17% originated in China, 25% in Korea, and 23% in Japan.

Tsushima boasts a scenic coastline, but its rugged contours also complicate trash collecting efforts. As many areas can only be reached by boat, the municipal environmental strategy department has inked contracts with 10 local fishing cooperatives representing 34 districts along Tsushima’s western coast to help in the cleanup effort. “It’s tough work,” explains Sharikura Masashi, who heads the department. “Getting onto the shore is hard enough, let alone picking up all the trash and hauling it out.” He says members of the cooperatives get together once a year to gather debris. 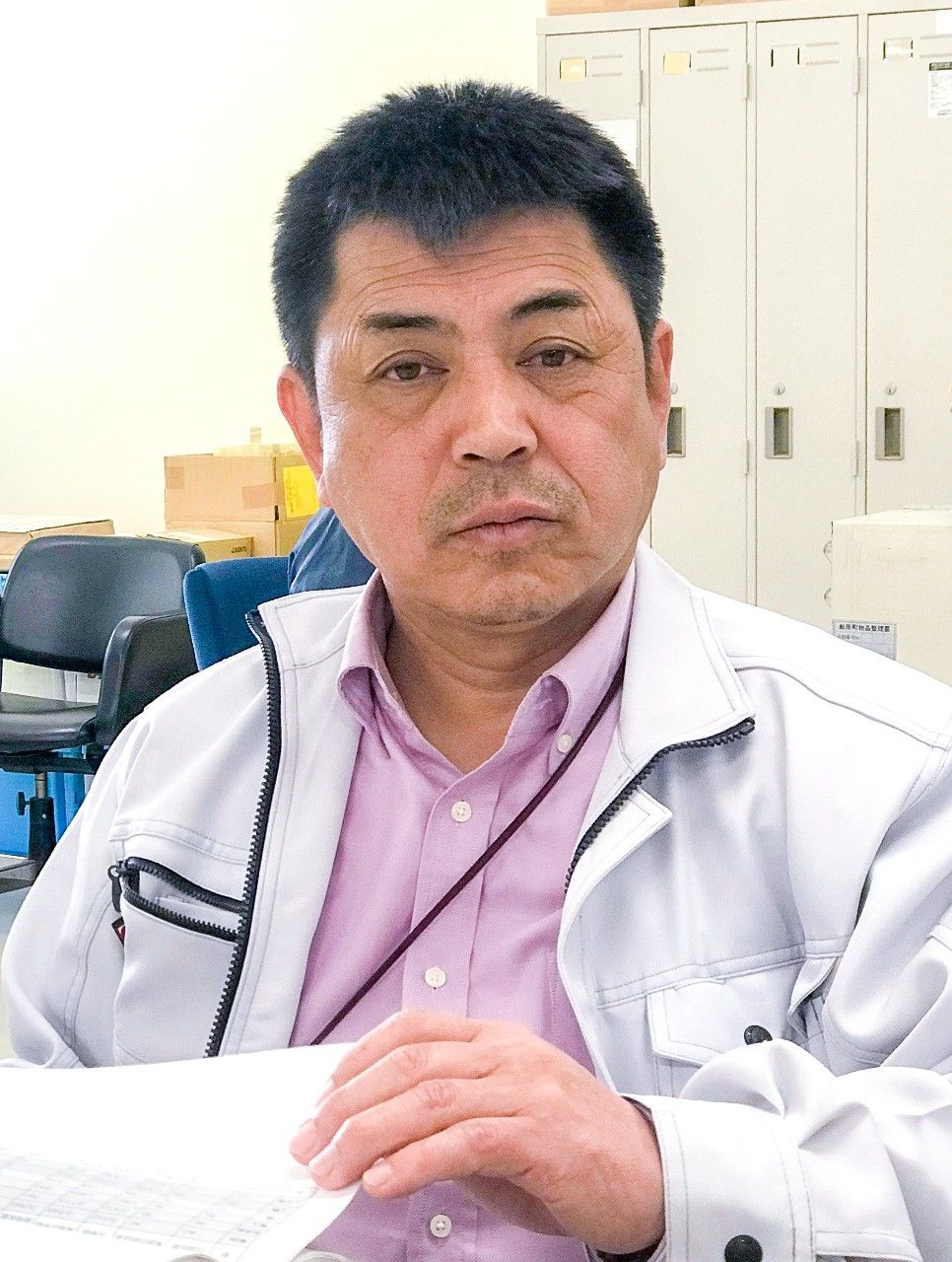 Sharikura, a native of a village along Tsushima’s western coast, remembers a time when no one gave a thought to marine garbage. Standing at the Komadahama Shrine, he points toward the sea. “When I was a boy I used to swim in those waters,” he recalls. Generations of his family have served as head priests of the shrine, a sanctuary dedicated to those who died battling the Mongol invasion in the twelfth century. Sharikura says that on clear days the Korean Peninsula can be seen hovering on the horizon, but he turns his eyes instead to the profusion of refuse along the shoreline. “There didn’t used to be a speck of trash in sight. People only began noticing something was amiss about ten years ago.”

Legislators in Japan have taken steps to address the mounting problem of ocean plastics, including passing a bill targeting marine debris that came into force in 2009. Since 2010 the national and prefectural governments have offered subsidies to local authorities for coastal cleanup programs and other initiatives. Tsushima, with one of the worst pollution problems, initially received around ¥500 million, roughly 10% of all funding. By 2018, though, this had fallen to ¥290 million, forcing the local government to direct roughly a tenth of its own budget toward projects.

Sharikura laments that the dwindling subsidies have forced the department to let garbage pile up in some areas. “We collect as much as we can afford to,” he explains. He says that the content of debris can change to reflects weather events, such as how armadas of driftwood reach Tsushima after flooding on the Asian mainland. However, the overwhelming amount of garbage originates in urban areas on the continent and in Japan .

Abiru Takahito, former deputy director of Tsushima’s environmental strategy department, is frustrated by a lack of understanding of the global scope of the problem at the national level. He describes his exasperation at learning from the Environment Ministry that the subsidy was decreased because the Finance Ministry was unhappy about the lack of progress in ridding the island of debris. “The reasoning is ludicrous,” he exclaims. “They obviously don’t realize that we have absolutely no control over what washes ashore.”

Faced with a seemingly insurmountable task and limited resources, authorities in Tsushima have few new alternatives for dealing with the endless waves of arriving marine debris.

Considering the scale of the challenge, surprisingly few residents of Tsushima are fully aware of how much debris litters the shoreline. According to Abiru, most islanders go about their lives without coming into contact with debris-strewn beaches. He says public swimming areas popular with school-age children tend to be kept clean, giving young swimmers a false sense that all of Tsushima is similarly pristine. “Children don’t get to see the hard-to-reach coves and inlets where garbage accumulates.”

School excursions to heavily polluted locations help raise awareness among younger residents. However, the financial and logistical challenges of reaching these remote areas have hampered such educational initiatives.

An equal challenge is getting Tsushima’s elderly residents—nearly 40% of the islands’ 30,000 inhabitants—to recognize the marine debris problem. Many older people reside in villages tucked among Tsushima’s hilly terrain. While buses connect these communities to coastal towns, routes do not bring passengers within viewing distance of garbage-spoiled stretches of the shore.

As a result, many residents fail to recognize that their own habits are contributing to the marine plastics crisis. While most islanders follow municipal garbage disposal guidelines, Sharikura says there are still places around Tsushima where people illegally dump home appliances and that littering remains an issue on backroads.

Amid the debate on how best to tackle the problem of ocean garbage, organizations like CAPPA, the Tsushima Coast and Aquatic Preservation Program Association, are promoting education initiatives aimed at younger generations.

Each year CAPPA brings together South Korean students learning Japanese at the Busan University of Foreign Studies and local high schoolers for an event that includes workshops and beach cleaning. Now in its seventh year, the programs taps into Tsushima’s shared history with Korea and encourages young participants to contemplate the impact of marine debris at both the local and global levels.

CAPPA also supports exchanges in the other direction. In January this year, 36 high school students from Tsushima visited Pusan, where they participated in workshops and discussion sessions with university students there. Some 400,000 South Korean tourists visit Tsushima annually, but for many participants it was the first time to experience the culture of the country firsthand. Students said that learning how local people dealt with marine debris gave them a sense of solidarity in addressing the issue.

The Need to Rethink Consumer Habits

Suenaga says the program has been effective in promoting conversations about the far-reaching impact of consumer habits—not just the trash arriving on people’s own shores, but the possibility that their own discards are making their way to beaches in other countries. Recently at Ōfunagoshi Elementary School, students performed a skit inspired by the exhibit. Participants took roles as either marine debris from regional countries like Japan, Russia, and China or nations suffering from ocean garbage. The short play had an emotional impact on the adults in the audience, and since then various groups within local fishing cooperatives have asked CAPPA to host the “trunk museum” exhibit along with lectures on marine debris. “Tackling the issue,” declares Suenaga, “is like the struggle for world peace. There needs to be an emergency to spark a sense of urgency before people wake up and take action.” 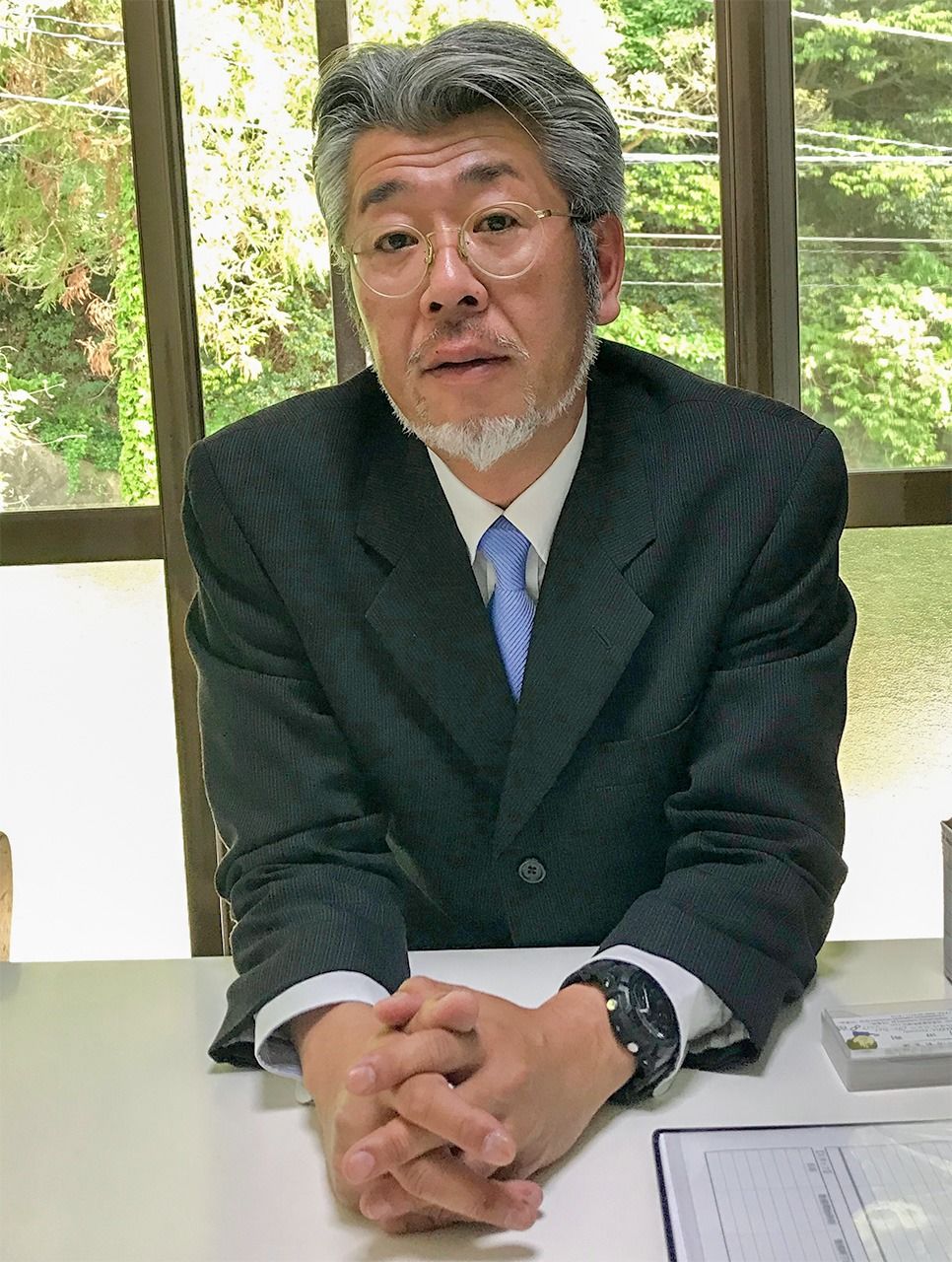 The fact that few people on Tsushima, where marine debris is ubiquitous, even see consumer plastics as an issue illustrates a broader lack of understanding in Japan. Although residents in urban centers like Tokyo and Osaka may hear about the issue, few stop to consider how they are contributing to the problem.

Suenaga emphasizes that the issues of marine debris is complex and cannot be resolved simply by city residents following municipal trash-sorting ordinances when throwing things out. Instead, people must wake up to the fact that it is a truly urgent global crisis. “I’m constantly thinking about how to make residents here on Tsushima and elsewhere aware of this truth.”

Tsushima is a microcosm of the world’s plastic problem. By taking stock of its own consumer habits and reducing consumption, it can serve as a model for building a less-polluting society. 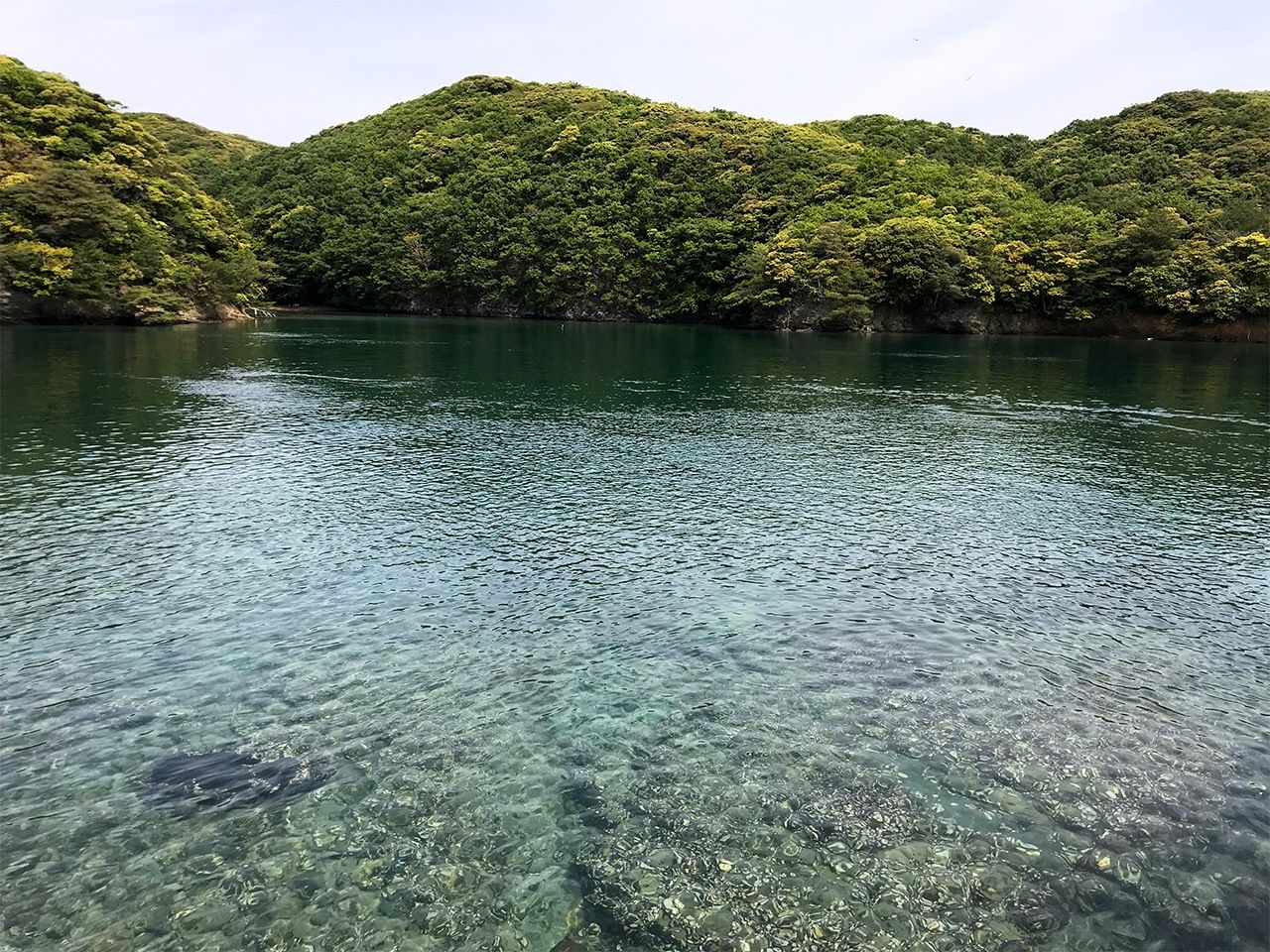 The blue waters and green hills of Tsushima.

(Originally published in Japanese. Banner photo: Marine debris litters a beach on Tsushima. All photos by the author.)