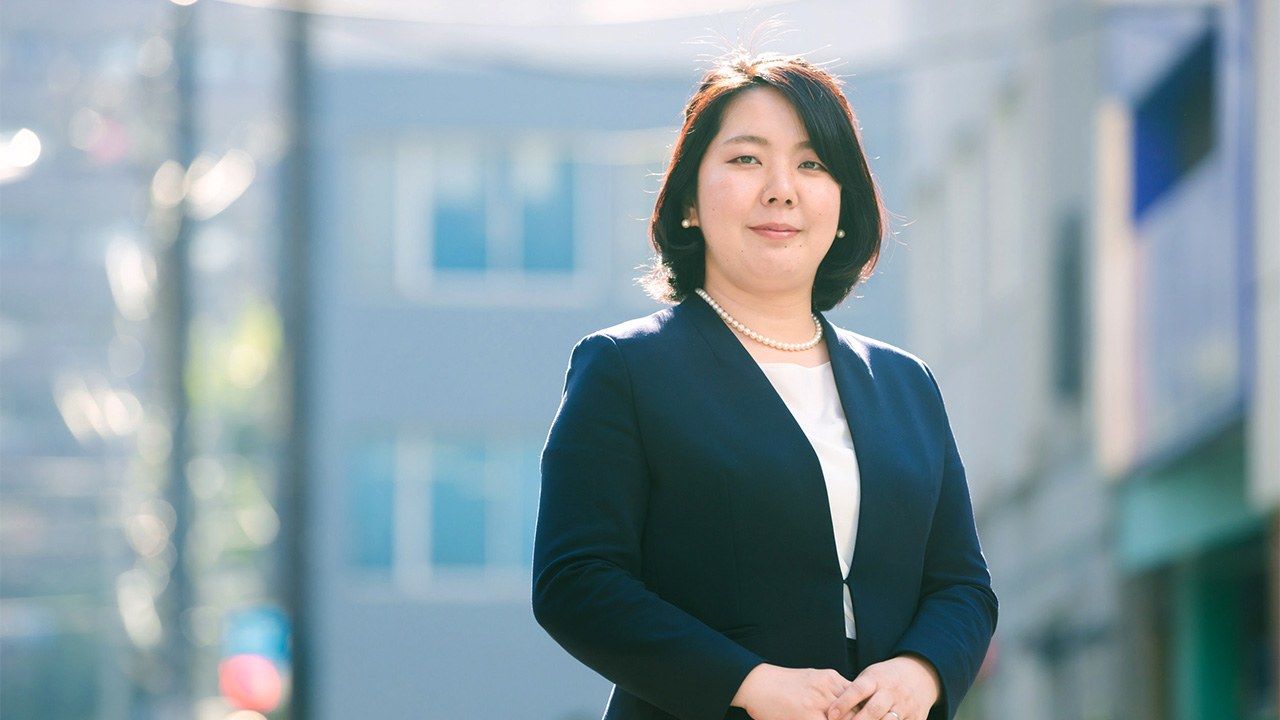 Society Education Family Oct 16, 2019
Nearly every day there is news of a sex crime in which the victim is a child. There are even cases where a child is the perpetrator. Not a few parents worry that their own child might become the victim, or perpetrator, of a sex crime. Nojima Nami, who contends that sex education is essential to alleviate such worries, heads the Pantsu-no-kyōshitsu Academy Association for Cheerful Sex Education. Her 2018 book, Okāsan! Gakkō de wa bōhan mo sex mo hinin mo oshiete kuremasen yo! (Mom! Schools Won’t Teach Your Kid About Sex, Contraception, or How to Stay Safe!), has gone through several printings.

It was a kidnapping incident in her neighborhood that got Nomura involved in sex education. The victim was a junior high school girl who followed a man when he asked her for “a little help.” When the kidnapping came to light, Nojima asked her two daughters, fourth and first graders, “If someone said the same thing to you, would you go with them?” Their response: “Yes, we would.” Nojima realized then that her daughters had no idea what they might get into or how dangerous it could be. 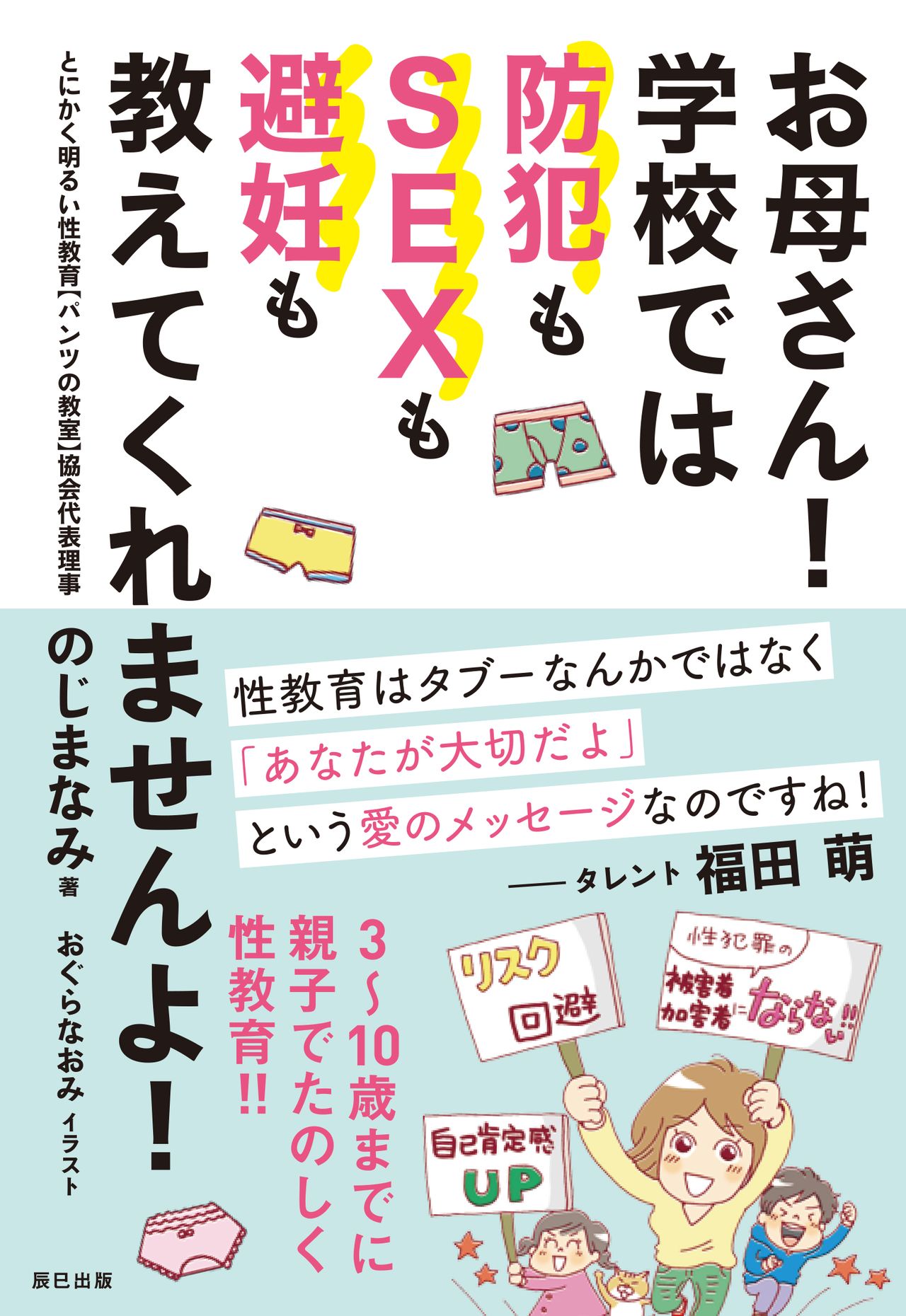 Nojima Nami’s Okāsan! Gakkō de wa bōhan mo sex mo hinin mo oshiete kuremasen yo! (Mom! Schools Won’t Teach Your Kid About Sex, Contraception, or How to Stay Safe!) is a guide for parents who want to provide their children with the sex-ed that Japan’s schools do not.

In another incident, Nojima found her daughters watching a pornographic video on their tablet. They said it was “fun,” and that they liked the nakedness and kissing. Asked how they got to the video, they said they had followed a link from one of their favorite animes. It had taken only five clicks or so to get from content for children to a pornographic site. Enter “good-looking” in the search box and you are taken to a website for “sex with good-looking guys.” Just about any search term can lead to a pornographic site of some sort.

Alarmed, Nojima single-handedly began a movement to encourage the spread of sex education. It wasn’t long before she was getting requests to speak from all over the country.

“Right from the start there was strong demand,” she says. “I didn’t run into any criticism. Mothers everywhere were secretly anxious. What if my child is a victim of a sex crime? What if my child commits a sex crime? How are you supposed to deal with a child who sees the pornography sold in a convenience store and begs you to buy the magazine with ‘the pretty lady on the cover’? There’s no one to advise you. Books on sex education are hard to find in bookstores and even libraries, and it is hard to know what sources you can trust when you search for information on the Internet. No one thinks we should leave things as they are.”

A Father Willing to Talk About Sex

Nojima says she was taught about sex from an early age by her father. His style of education was to dispense nuggets of wisdom ranging from “It doesn’t matter if your breasts aren’t big” to “Make sure you use a condom.” After she grew up and became a nurse specializing in urology, Nojima realized that what her father had taught her was not always correct. What helped, though, was that her father taught her these things as a matter of course so that she would know how to protect herself. This attitude helped them to build a close relationship in which no topic was taboo. 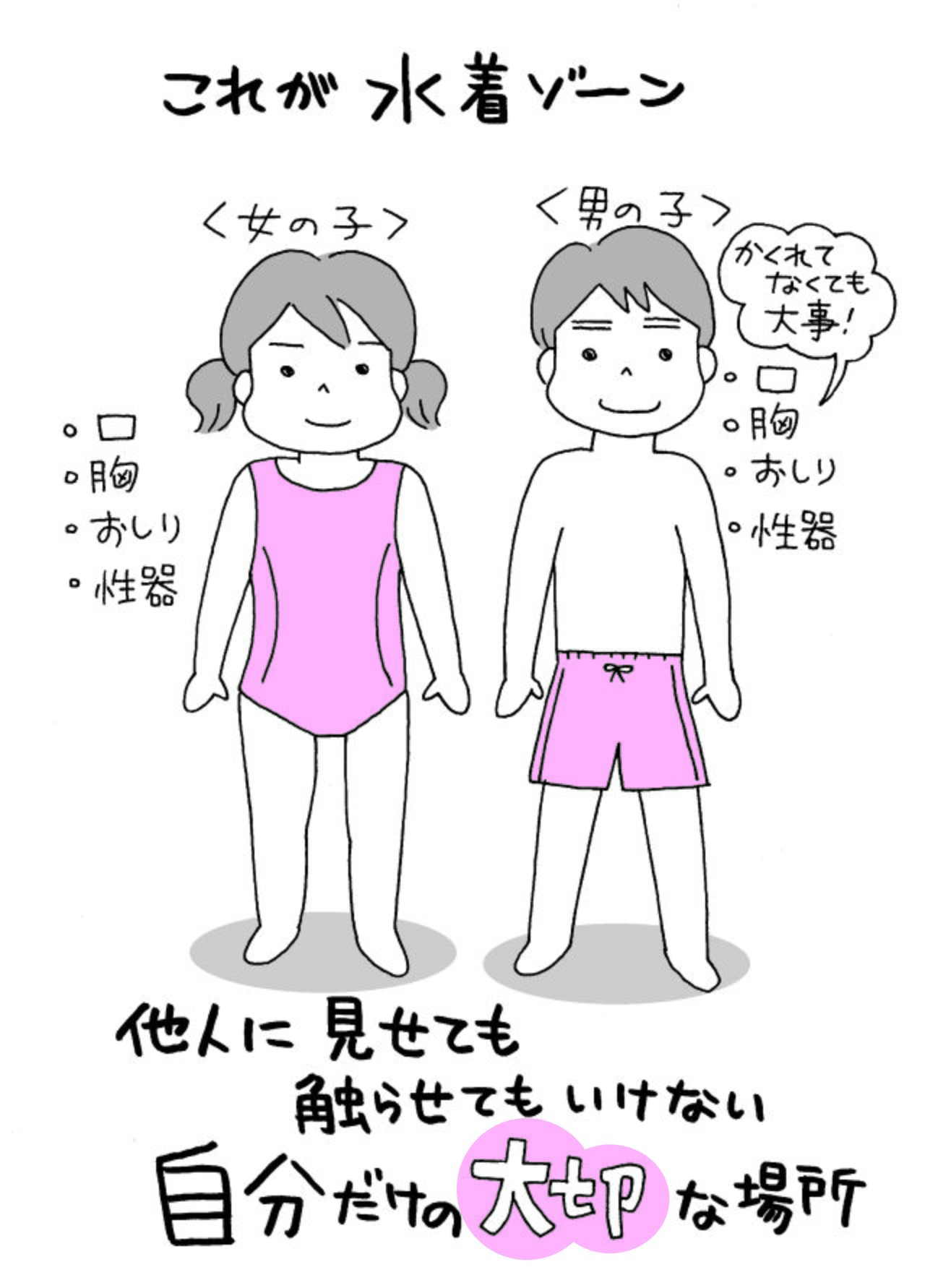 “Thanks to my father, I grew up confident that I was welcomed and loved. We were able to talk about anything in our family. Mothers often ask me, ‘What will happen if our children are taught about sex?’ They fear that their children may start to experiment with sex from an early age.”

These fears are unfounded, explains Nojima. “But that’s not what happens. Akita Prefecture, for example, used to have an abortion rate among teens that was higher than the national average. But since around 2000, when they started including sex education in the curriculum for junior and senior high schools, the abortion rate has gone down. By 2017, the number of teen abortions in the prefecture had dropped to around 7 percent of its previous level.”

Nojima is confident that the education is what did the job. “Sex-ed is education about life and love. A child who is loved will feel affirmed and confident and will be able feel empathy for others. There are hundreds of benefits to sex education and not one drawback.”

Nojima learned about sex from her father, but her book is directed at mothers. Her expectations of fathers being involved in sex education are low, she says. We asked her why.

“So far I have talked about sex education to more than 4,000 people. Sad to say, all the fathers seem to think it is something that can be ignored. Fathers never had sex education themselves and so the topic is off limits as far as they are concerned. They are also too busy with work to develop good communication with their children. When you aren’t used to talking to your kids on a daily basis, talking about sex is just too embarrassing. That’s why I am targeting the mothers. Still, if there are fathers who aren’t afraid to talk about sex and who are able to communicate and have a relationship of trust with their children, it would be great to have such fathers cover the subject with their kids.”

There aren’t many sex education books directed at boys. Most are for girls, even though boys can be victims of sex crimes too.

“In male culture, there’s an underlying assumption that boys can learn all they need to know about sex from watching adult videos. But what happens is that, for example, boys will start to worry that they are no good because their penis is too small. No one teaches them that penis size doesn’t matter. The other day a father in his forties came to me with a question. He’d been circumcised when he was young and wondered if he should have his son circumcised too. He feared that his son had phimosis, a condition in which the foreskin of the penis cannot be pulled back past the glans. It turned out that this father had undergone unnecessary surgery for a false case of phimosis. Such surgery is really only necessary for about 1 percent of men. In 70 percent of surgeries, it is false phimosis. If the foreskin can be pulled back even a little bit when the penis is erect there is no need for surgery. When I explained this to the father, he broke out laughing. ‘I wish I had known that earlier,’ he said.”

Nojima encourages teaching both boys and girls about sex from age three. They should be taught together, she says, because when they learn about each other’s bodies, they will be more likely to take care of their own bodies and show caring for the bodies of others. Age three is about the time children start asking where babies come from, and at this age they will be more open to learning about sex that is taught to them by loving parents.

“In one household where the children had had sex education, a mother reported that her son offered to wash the dishes, saying ‘You aren’t feeling well because of your period right now. I’ll do the dishes. Get some rest.” He also said, ‘I’ll do the same for my wife when I get married.’ On the other hand, I also had a junior high school teacher tell me that she cried when she overheard a former student boast that he had locked his girlfriend out on the balcony in the winter. He was punishing her because she refused to have sex with him while she was having her period. You have to feel sorry for the girl, of course, but also for the boy because he wasn’t taught any better.” 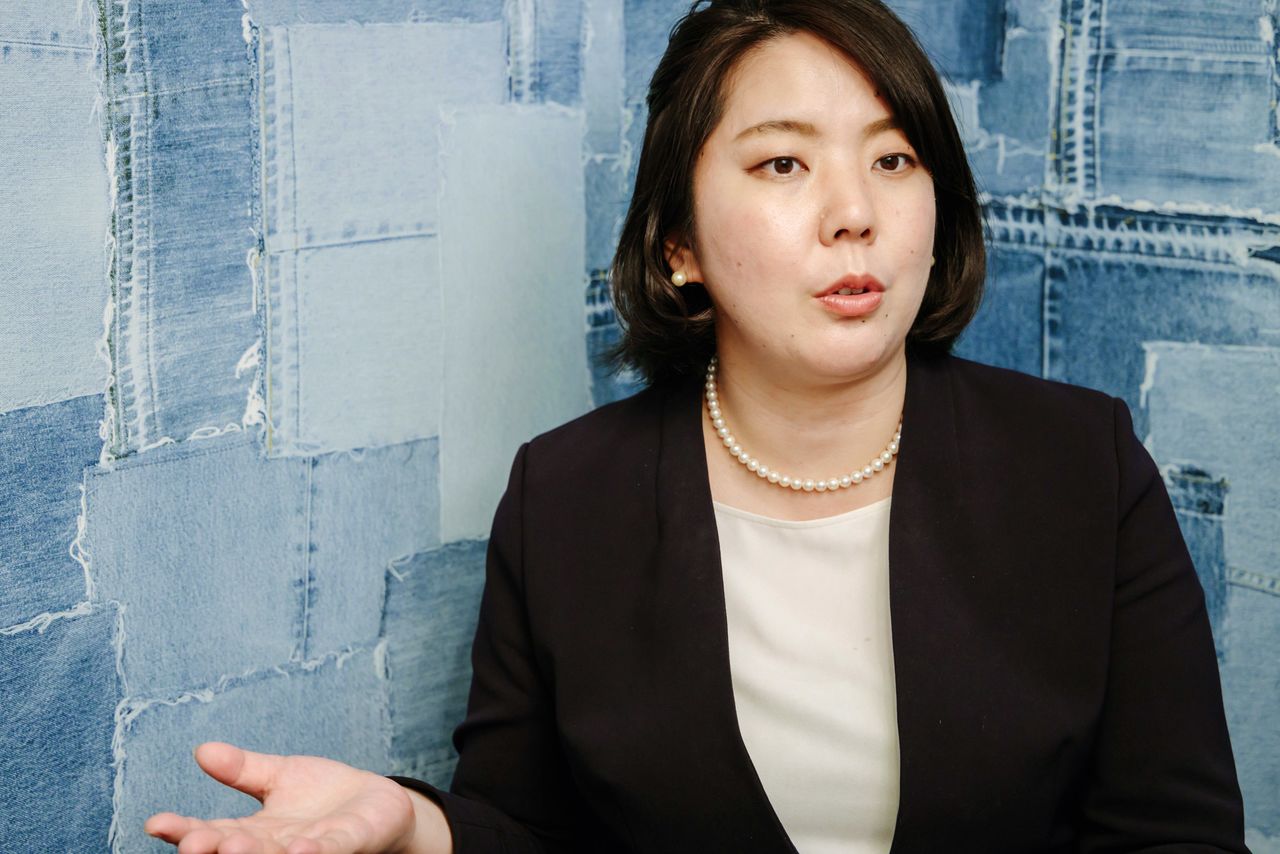 Nojima is invited to speak about sex education by numerous day care facilities and kindergartens, elementary and junior high schools, and administrative agencies. Once, she was asked by a major company listed on the stock exchange to participate in an event on sex for parents and their children.

“The event was planned by mothers working at the company who were around the same age as me, in their thirties. But just when they were ready to implement their plans, a disapproving manager around my parents’ age called it off, saying it was unthinkable to talk about sex in a mixed group of parents and their children. This isn’t an uncommon reaction from those of the older generation. It made me realize that I still have a lot of work to do to change their minds.”

What kind of sex education is needed to prepare children for the future world they will live in?

“We are going to see a lot of people from overseas coming to Japan to work. And our children may well be going out into the world to work themselves. Given the sexual diversity of people in the world, refusing to accept diversity is just going to make life harder for that person. Your children may happen to be in a sexual minority, but that is not as unusual as you may think. Not so long ago, there was an incident in London when two lesbians on a bus were bullied by a group of young men who yelled at them to kiss each other and then hit them when they refused. It’s awful to think that your own child could be the perpetrator—or a victim—in such a situation simply because of a failure to accept diversity. This is why it’s important to encourage sex education that also covers diversity.”