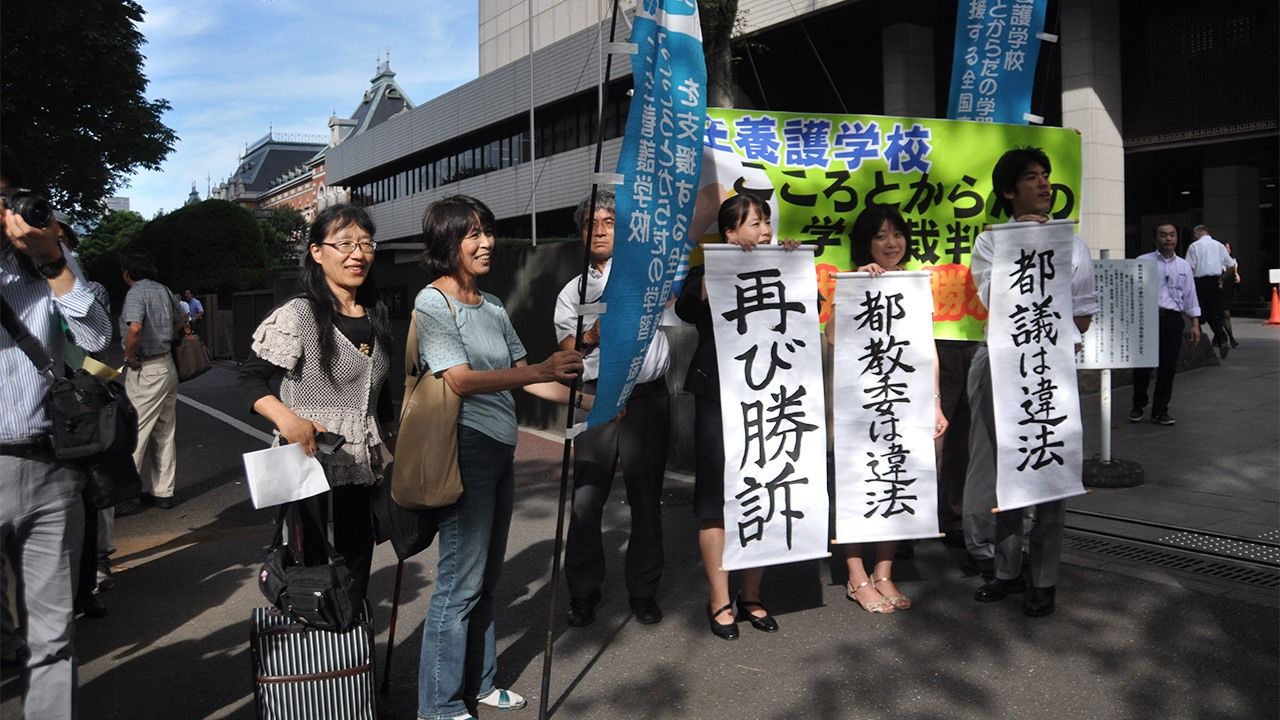 Society Education Nov 15, 2019
Sex education in Japan’s schools lags behind that in other countries on many fronts. What are the differences and why is Japan behind so much of the rest of the world? We asked Hashimoto Noriko, professor emeritus at Kagawa Nutrition University and an authority on educational sociology and gender studies, to explain.

Learn About the Body—But Keep It Clothed

This is a page from a health and physical education textbook for third and fourth grade school students. The textbook is Minna no hoken (Health for Everyone, published in 2011 by Gakken) and the page is titled, Otona ni chikazuku karada (“As the Body Approaches Adulthood”). 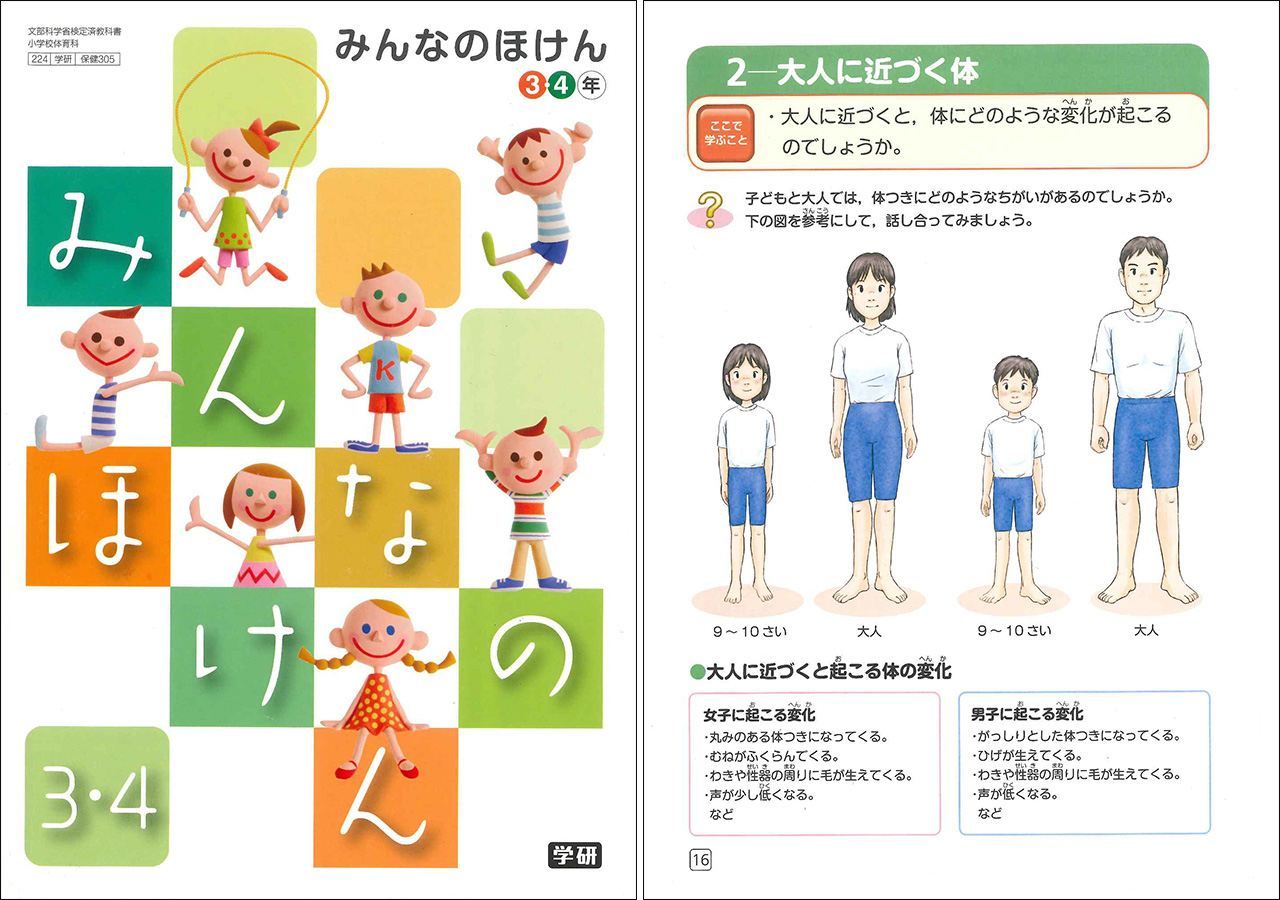 Shown are a boy and girl, around age 10 and as adults. All are depicted wearing short-sleeved tops and shorts. Says Hashimoto: “How can you learn about the changes in the body by looking at an illustration of clothed figures?” In the 2005 edition of the textbook, the figures are naked, but someone decided to put clothes on them for the 2011 edition.

The international differences are stark, as she explains. “In Finland and France, they teach biological facts, such as the role chromosomes play in determining the sex of a fetus; they delve into the diversity of human sexuality; and they explore the phenomena of human relationships. In China, they use explicit illustrations of the sexual organs to teach about sex, and the sex education in major Chinese cities is strongly influenced by the attitudes of Chinese citizens who have studied abroad. In Japan, however, as we can see by this textbook illustration, nothing is taught about the biological and scientific facts of human reproduction. 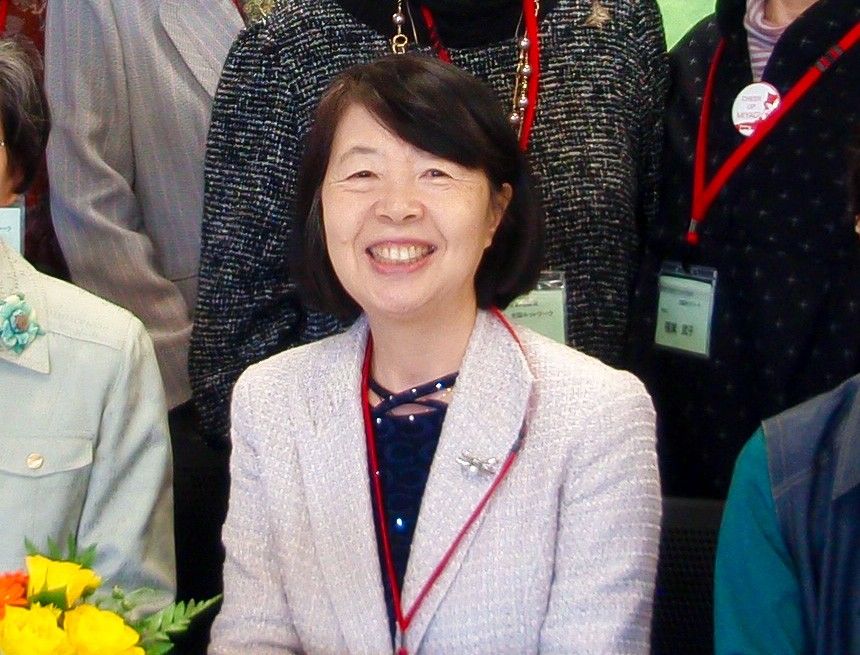 Hashimoto Noriko believes Japan has much progress to make in the area of sex education. (Photo provided by Hashimoto)

A great part of this is due, says Hashimoto, to National Curriculum Standards that prohibit teaching about the processes of fertilization in fifth-grade science or about pregnancy in first-year junior high school health and PE classes.

Hashimoto explains how sex education in Japan got to this point.

“In the 1990s, sex education in Japan was among the most advanced in Asia, in part because of the AIDS scare. It was possible then to teach junior high school students about sexual urges and sexual behavior, sexual intercourse and birth control, and sexually transmitted diseases. The revised government education guidelines for elementary schools issued in 1992 for the first time called for health class textbooks for the fifth and sixth grades. A supplementary reader published in 1991 included a section on sexual intercourse. A textbook with similar content is being used in South Korea right now for sixth grade classes. But in Japan, this supplementary reader is out of print.”

Japan’s sex education was at the forefront in the 1990s. Why did it suddenly regress? The backward trend is related in part to a 2003 campaign to stop sex education at what is now the Nanao Special Support School, a Tokyo public institution for children with special needs. The campaign was led by some members of the Tokyo metropolitan assembly who were shocked to learn the school was teaching children with mental disabilities about sex using songs and dolls. They criticized the school for teaching “inappropriate” content that went well beyond government curriculum guidelines. The Sankei Shimbun concurred with a report critical of such “extreme” education, and the Tokyo Metropolitan Board of Education took disciplinary action against the principal and other teachers at the school. The faculty and parents fought back, however, taking the case to court with the claim that such intervention by metropolitan assembly members and the board of education was illegal. The case went all the way up to the Supreme Court, where it ended in 2013 in the defeat of the Tokyo metropolitan government and legislature. 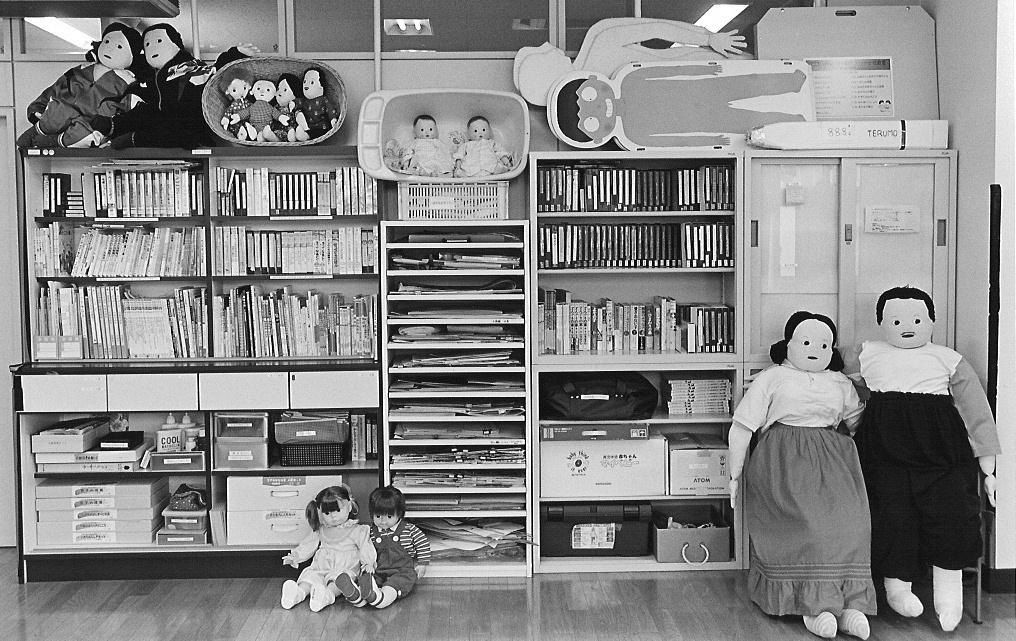 These sex education materials in the health care office at the Nanao school were confiscated by the Tokyo Metropolitan Board of Education in 2003 in response to growing public disapproval of sex education in general.

“The court decision stated that the National Curriculum Standards could not be interpreted as word-for-word legal writ,” says Hashimoto. “In other words, the Standards are simply guidelines and a school’s decision to do something outside of the guidelines cannot be immediately judged as illegal. This case took ten years to resolve and went all the way to the Supreme Court. During this decade, sex education stagnated in Tokyo schools, where the disciplining of the Nanao teachers had a chilling effect.”

In 2004, immediately following the furor over the Nanao incident, the Tokyo Board of Education revised its handbook on sex education to emphasize that sex education must be pursued systematically and in stages appropriate to students’ physical development and in line with the National Curriculum Standards.

The Nanao defeat did not deter a Tokyo assemblyman involved in the case to once again, in 2018, decry as “inappropriate” a school’s approach to sex education. This time the criticism was aimed at a ninth-grade class on birth control and abortion in a public junior high school in Adachi, Tokyo. The National Curriculum Standards recommend that these topics be covered in senior high school, but this does not mean the junior high school acted illegally by including them in their curriculum.

“This junior high school had found in a survey that nearly half of its students thought it was OK to be sexually active once they moved on to high school. This, and the fact that the school was located in a less affluent district, led to the decision that earlier education on birth control and abortion was imperative. The school did not bring up the topics all of a sudden. The teachers began by teaching the seventh graders about relationships and the importance of equality, gradually leading up to the topics of birth control and abortion.”

Hashimoto stresses: “Children who undergo sex education learn to control their bodies. Without proper knowledge, they are left defenseless. And yet there are people who do now want to give children the knowledge they need.”

The Problem with Sex Ed in Ethics Classes

“I see problems with every one of the eight publishers of government-approved junior high school ethics textbooks,” says Hashimoto. “Take for example, the ethics textbook for public junior high schools published by Nihon Kyōkasho, a textbook publisher with close ties to Nippon Kaigi, an ultranationalist group. This ethics textbook—which, by the way, Tokyo decided not to use in its schools—has a section titled ‘Life Roles,’ which tells the story of a mother on the day she is to be interviewed for a promotion at work. Both parents work in this family, and they usually have the grandmother who lives nearby take care of their youngest elementary school child during the day. On this important day, however, the grandmother falls ill and needs to be taken to the hospital. The father says he must go to work, and the elder daughter, a university student, says she has to go to school to make a presentation. The mother phones her company to cancel the promotion interview saying, ‘It appears I have another role to play.’ The family’s junior high school daughter is left to wonder what this ‘other role’ might be. The message is: Housework, childcare, and nursing care of elderly parents take precedent over a woman’s career. This is completely out of line with the concepts of gender equality and diversity in UNESCO’s International Technical Guidance on Sexuality Education.”

The Impact of the Failure to Teach About Sex

The biological, scientific facts of sex, noted earlier, and the concept of gender equality are missing in Japan’s sex education, says Hashimoto. Gender equality is a core concept in the global standard set by UNESCO’s Guidance. Japan’s failure to teach this concept is evident in a number of areas.

“Some years ago Thailand introduced a policy allowing married couples to choose to have different surnames. This is still not allowed in Japan. As with the approval of oral contraceptive pills, Japan is once again the last holdout in the United Nations to approve such policy. The virility drug Viagra was promptly approved to treat erectile dysfunction in men, but it took a long time before contraceptive pills were approved. As can be seen in the ethics textbook example cited earlier, there is a neoconservatism, which first appeared in the 1970s, that blames Japan’s economic ills on a decline in morals and advocates a return to traditional conservative values. This dovetails nicely with the neoliberal interest in the pursuit of profit.”

Hashimoto goes on: “These people want to cut back on social security. The family should be the safety net, they say, and women should sacrifice themselves for the family. But this perception of society goes completely against the Convention on the Elimination of All Forms of Discrimination Against Women which calls for the elimination of gender-based roles.”

The CEDAW was adopted by the United Nations General Assembly in 1979, took effect in 1981, and was ratified by Japan in 1985. Later, in 1999, an amendment was added that allowed for individuals to directly appeal to the UN’s Committee on the Elimination of Discrimination against Women when their rights as stipulated by this treaty were violated and they were unable to find recourse within their own country. Hashimoto notes, though: “This is an optional protocol, and Japan is the only developed country that has yet to ratify it. If Japan had ratified this protocol, it would be possible to appeal to the United Nations to make Japan give couples the option to each retain their respective surnames after marriage.”

What does this kind of delay in promoting human rights mean for Japan?

“The UNESCO Guidance asserts that sex education from early childhood through adulthood can determine a person’s happiness throughout life. The failure to provide proper sex education hinders individual development and happiness. If things continue here as they are now, Japan is going to find itself isolated within the international community.”

(Originally written in Japanese. Reporting and text by Kuwahara Rika of Power News. Banner photo: The Nanao Special Support School defendants hold up banners declaring the court ruling in their favor in front of the Tokyo High Court, September 16, 2011.)