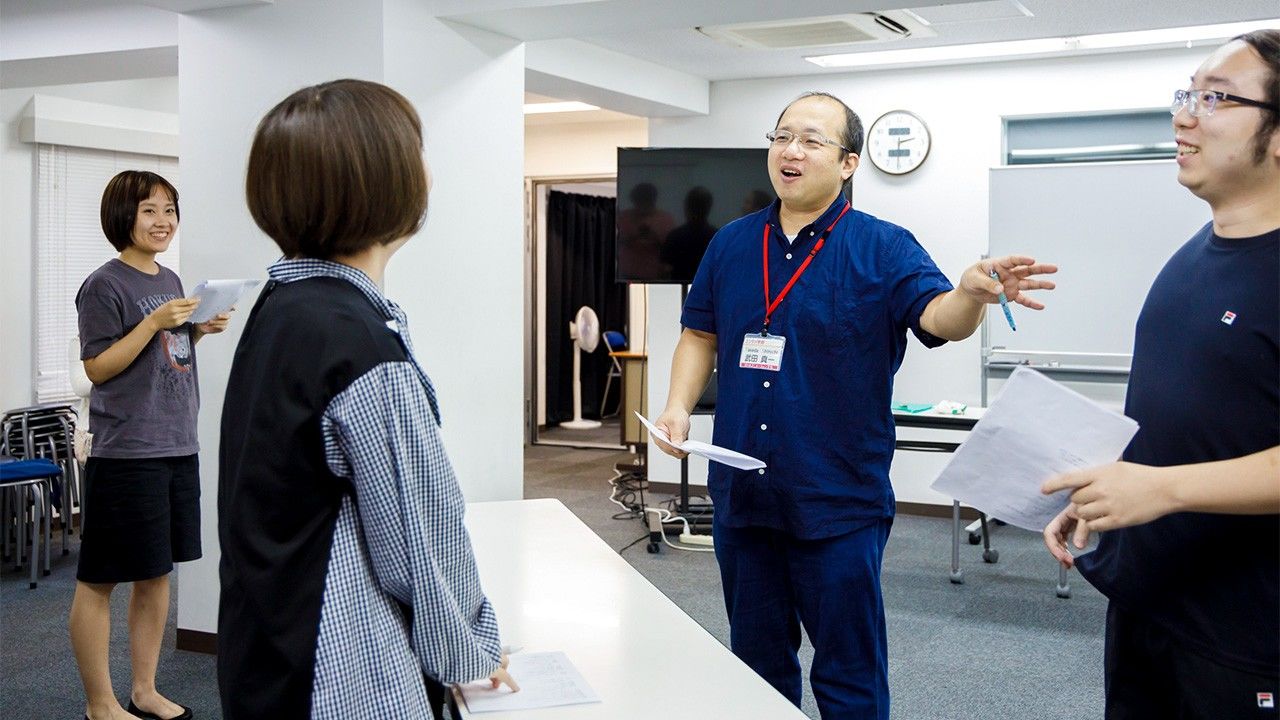 Culture Society Jan 24, 2020
A growing number of people from overseas are looking to Yoyogi Animation Academy for training to become voice actors. Takeda Shin’ichi has taught at the Tokyo-based academy for the past 14 years and is in charge of a course specially designed for international students. He talked to us about his work there.

Takeda Shin’ichi is a voice-acting instructor at Tokyo’s Yoyogi Animation Academy. There are around 15 people in his class for international students, most attending Japanese universities while taking the once-a-week, 6-month voice-acting course. Tuition runs up to around ¥150,000, including an entrance fee, and all classes are taught in Japanese. A majority of the international students in the course are from China. Others hail from Hong Kong, Taiwan, and other places in Asia; there is also one student from Australia. The curriculum covers lessons in abdominal breathing, character performance, basic techniques, how to read a voice-acting script, mike work, and anime dubbing.

All of the students say their love for Japanese anime is what brought them to the academy.

“Many of the students say that as children they watched Japanese anime dubbed into their own language,” says Takeda. “As they grew older, they decided they wanted to see the original Japanese versions. So they started studying Japanese on their own, and in learning the language they realized that they had missed a lot about Japanese culture in the dubbed versions that they had been watching up to then. This made them want to learn even more Japanese.”

This day, there is a performance practice session using a short script in which three characters appear. This will be the last practice session before the end of the 6-month course. The script covers a scene in which a man who has just quarreled with his girlfriend comes to a jewelry store where she works to buy her a ring. The students play the roles of the man, the girlfriend, and the store attendant. As they read through the script, Takeda gives them pointers on pronunciation and expressing emotion.

“We use the exact same script that’s used in the classes for the Japanese students. To become an anime voice actor, you have to have training in expressing emotion. I’m an actor myself and still work the stage once in a while. At this school, real actors and voice actors teach the necessary techniques.” 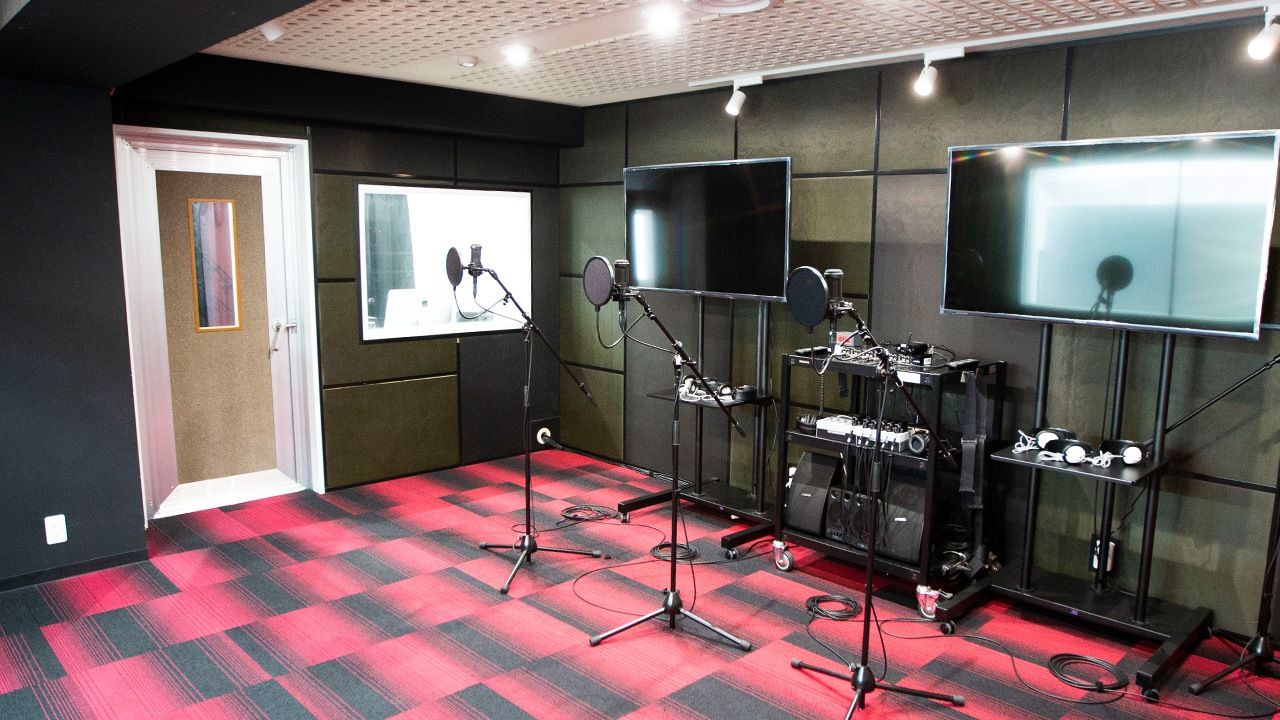 The recording booth used for the Academy classes. Students learn basic techniques, starting with how to read a script.

One scene in the script has the girlfriend, without speaking, gesture with her hand to let the man know he has chosen the wrong ring size and that the correct size is an 8. The student playing the part raises her thumb and first two fingers, which is how the number 8 would be expressed in her country. Right away, Takeda steps in and shows her that in Japan, you use the fingers of both hands to indicate the number 8.

“These cultural differences occur often in our classes,” says Takeda. “Each time I teach the students about Japanese culture, however, I learn something about their culture as well.”

The class is almost over. Everyone has gone through the script once, and when Takeda asks if anyone wants to give it another try, no one raises their hand.

“This is a common problem with all of our students, both Japanese and foreign. They are too embarrassed to perform in front of their classmates. But if you want to become a voice actor, you have got to overcome your embarrassment. You can’t afford to be shy. A voice actor, in particular, has to be able to enunciate clearly and speak the lines smoothly. Everything has to be expressed with sound, and those listening have to be able to understand every word.”

Before the Academy set up a special course just for international students, there was one American woman who enrolled in the regular Japanese night class for voice acting. She no longer works as a voice actor but was once affiliated with a Japanese voice studio. The special course for international students was set up later in response to a strong interest from international students attending Japanese universities. Simply enrolling in this once-a-week course, however, is not enough to become a professional voice actor—the course is intended only as a resource for improving Japanese enunciation and otherwise refining Japanese language speaking skills. Students who are serious about a career in voice acting are encouraged to enroll in the Academy’s full-time course.

“Some of the people who attend our special course for international students aspire to become voice actors in their native language. For example, there may be a niche for professional voice acting in China, where announcers currently fill that role. Our course offers instruction in voice performance basics that can be applied in any language.

“Our once-a-week course for international students is popular because you can improve your Japanese enunciation with lessons in your favorite anime.”

Learning to Sell Yourself Online

The functions of the voice actor have expanded in recent years to include participation in events and live shows. Voice actors are treated like personalities these days. How are schools dealing with this major change in the nature of the profession?

“The number of voice acting studios has grown, and so has the number of professional voice actors,” explains Takeda. “Back in the day, voice actors had to work on their own, even to negotiate their own rates, but now they have managers and the rates for anime work are pretty well set. There are also compensation systems in place for secondary uses, such as with DVDs. The primary jobs for voice actors used to be dubbing anime and Western movies. Now, though, video streaming services like Netflix are creating an even greater demand for them. Add to this, the kind of work voice actors get as personalities, such as performing in ‘2.5-dimension musicals’—popular real-life stage productions of Japanese anime and manga. The academy has prepared courses to meet these needs and we are attracting students who aspire to become voice acting personalities.”

In 2017, Sashihara Rino, formerly of the popular idol groups HKT48 and AKB48, was the producer for auditions held at Yoyogi Animation Academy to form a voice actors idol group. The 12 candidates who were selected took lessons at the Academy and later debuted that same year in the voice actors’ idol group = Love (pronounced “Equal Love”).

“In our full-time voice acting course, we also teach private individuals and celebrities how to livestream on our Showroom platform. It’s common these days for idols and other personalities to post their own videos on the Internet. Voice actors need to learn how to do that too. We provide them with individual booths for livestreaming and teach them how they can best attract more fans.” 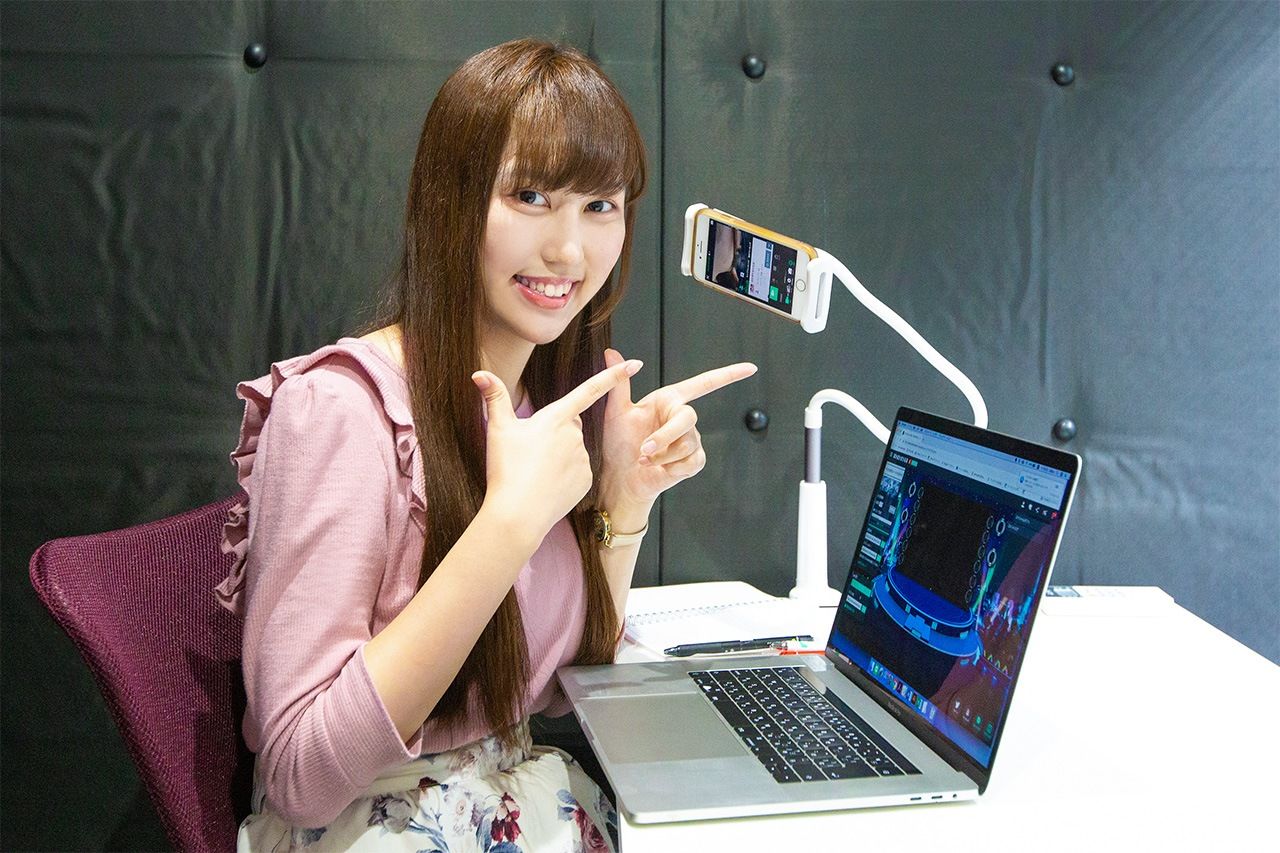 Students can livestream their own videos on the Showroom platform from individual booths.

As voice acting morphs into a career track for show business idols, there is growing demand for very young people, and more schoolchildren are aspiring to the profession.

“Not so long ago, adult voice actors handled all parts, even those of small children. There were no child voice actors then, but now there are. As voice acting becomes a more visible profession, more people are attracted to it, and parents are more understanding of the kind of work it entails and willing to let their children give it a try. To meet this new demand, we created a Junior Course about two years ago. Junior high school students can enroll in the full-time course and children as young as fourth grade can enroll in the once-a-week course. Some of the children are enrolled by parents who once studied with us themselves.”

Only a handful of the Academy’s graduates, however, are able to succeed in the profession. What does it take to be a successful voice actor?

“A lot of the success stories have ‘good’ voices, but that’s more a matter of individual characteristic than of any special talent, and is not necessarily an advantage. What are most important are technique, acting ability, and communication skills. No matter how good you may be at acting, you’re not going to get very far if you can’t communicate well with the production crew. You need to know what they want and you need to be able to give it to them.”

“This is a profession that requires you to interact with people. That opens you up to a lot of wonderful opportunities. It’s not uncommon anymore, for example, for voice actors to perform at events overseas—something that was not even thought of in the past. Voice acting is not an easy profession, but if it’s what you really want to do, you just need to work hard and stay strong and focused.”