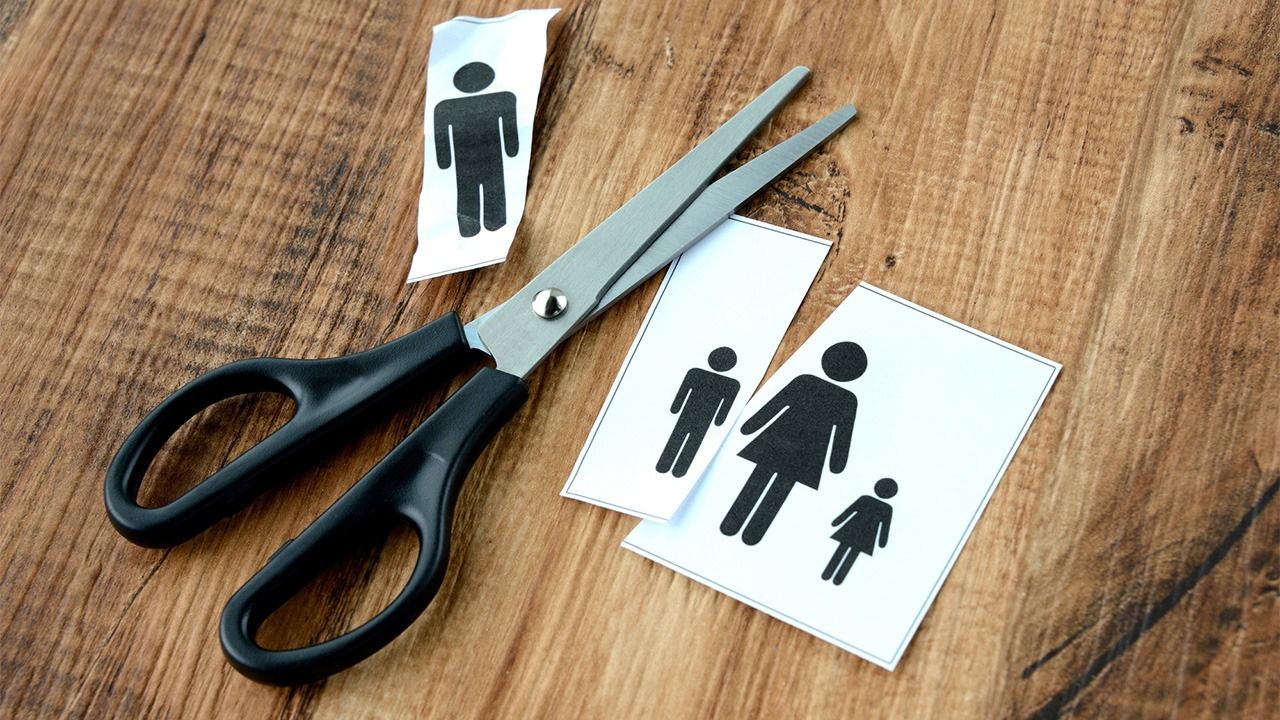 Reaching Out to Older “Hikikomori” and Their Families

Society Family Jan 29, 2020
Recent estimates suggest that more than 1 million Japanese are hikikomori, people living in seclusion from society. And many of them are over 40. More support is needed for these middle-aged recluses and their elderly parents.

Lack of Support for Older Hikikomori

The Japanese government estimates that there are more than 1 million hikikomori, recluses who shun society, amounting to 1% of the country’s population. The figure derives from a pair of surveys. The first, which was conducted in September 2016, measured the number of hikikomori among those aged 15–39 (see table 1).

Created by Nippon.com based on a survey of 3,115 people aged 15 to 39 published by the Cabinet Office in September 2016. The estimated populations are calculated by taking percentages of the total population aged 15–39 of 34.5 million, as estimated by the Ministry of Internal Affairs and Communications in 2018.

The second, conducted in March 2019, assessed the number of hikikomori aged 40–64. It was the first such survey directed at this age group, and the results indicated that social recluses are even more numerous in this older cohort than among the under-40 group (see table 2).

Created by Nippon.com based on a survey of 3,248 people aged 40 to 64 published by the Cabinet Office in MArch 2019. The estimated populations are calculated by taking percentages of the total population aged 40–64 of 42.4 million, as estimated by the Ministry of Internal Affairs and Communications in 2018.

Combining the two results gives a total of over 1 million. Surveys by local authorities have similarly found more hikikomori aged 40 and over than those under 40. Kawakita Minoru, an associate professor at Aichi University of Education, writes about the issue of middle-aged recluses living with increasingly elderly parents in 8050 mondai no shinsō: Genkai kazoku o dō sukuu ka (The Depths of the 8050 Problem: How Can We Rescue Families on the Brink?). The “8050” in the title is shorthand for the ages of parents (typically in the vicinity of 80) and of their society-shunning middle-aged offspring (who tend to be around 50).

Kawakita notes that there is not adequate support for older people living withdrawn from society. “In Japan, people are expected to complete the stages of finding a job, getting married, and buying a home, moving toward independence like they’re riding an escalator. But if they fall down at the job stage, it’s hard to get up and try again. This means that people for whom the process doesn’t go smoothly are liable to spend their lives as ‘children’ under their parents’ roofs. And there’s great social pressure on parents to let them stay.”

Keep It in the Family

In May 2019, a 51-year-old man armed with two knives attacked elementary school children and adults waiting for a school bus in Kawasaki, Kanagawa Prefecture, before committing suicide. Two people died and 18 were injured. Four days later, a 76-year-old former vice agricultural minister fatally stabbed his 44-year-old son, who lived with him in Nerima, Tokyo. In explanation, he stated his fear that his son would cause harm to those around him, as had happened in Kawasaki. 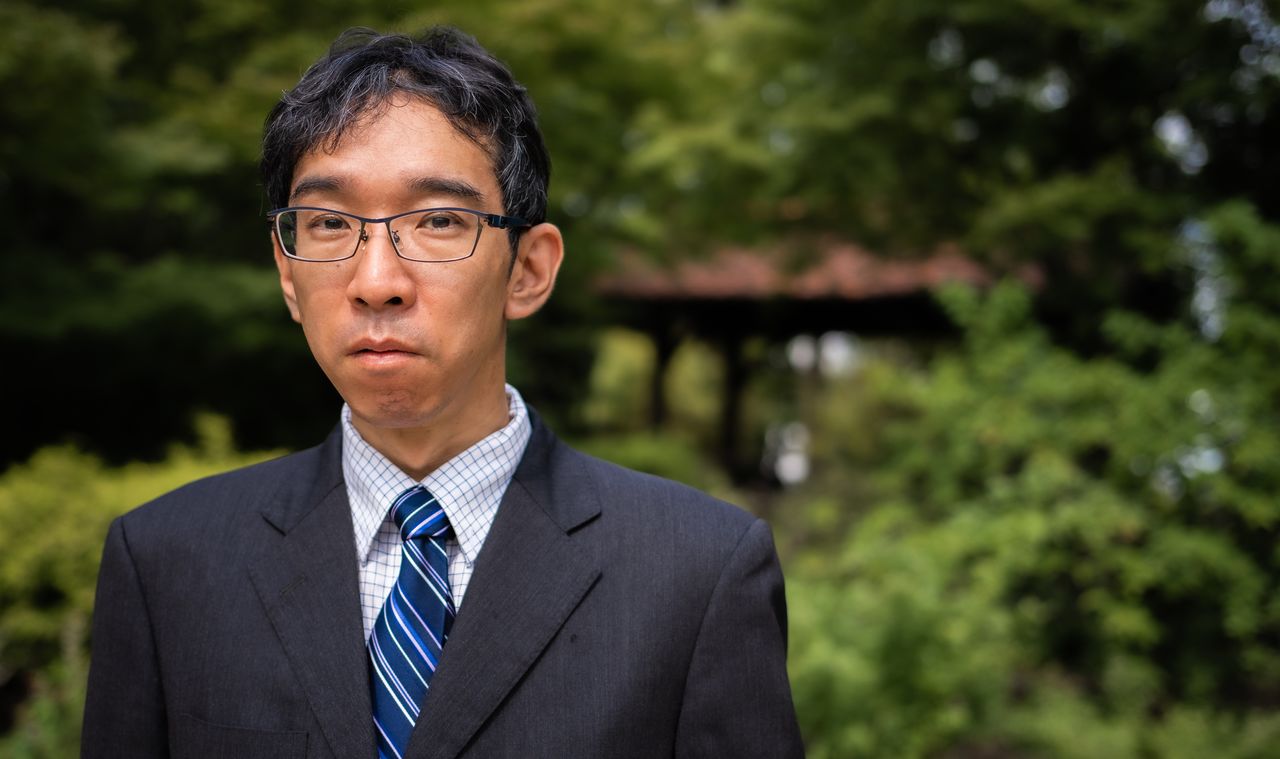 “Both the Kawasaki attacker and the man killed in Nerima were reported as being hikikomori,” Kawakita says. “Naturally, social withdrawal is not directly connected to such rare crimes as indiscriminate murders. What concerned me were public reactions to the two incidents along the lines of `If you’re going to commit suicide, do it alone,’ and ‘The father tried his best to fulfill his responsibility.’ I felt these were based on the thinking that it was fine to kill oneself or a family member, so long as it didn’t cause any trouble to others. In past cases where parents have killed their disabled children, despairing at their imagined future, there have been movements to reduce their sentences from those who pitied their situation. Disabled people then protested against the notion that if they were killed, it was regrettable but understandable. Can we really describe the murder of the son in Nerima as something that could not be helped?”

There is increasing talk of “personal responsibility” in Japanese society, but with hikikomori responsibility seems to apply at the family level. Where did this idea arise? Kawakita explains:

“In agricultural times, children were raised by the community and the home was a productive economic unit, but during Japan’s years of rapid economic growth, companies became the workplaces, and the home became the place to return to after work. In sociology, it is sometimes said that the final functions left to the home were relaxation and raising children. Nursing and healthcare also moved outside, and as people died in hospitals, their funerals were no longer held at home. It became an increasingly private place into which those outside the family rarely entered. This led to its success being measured by the results of child-raising. If the children are doing badly, it’s seen as a bad home. And if a child withdraws from society due to bullying at school or problems with others at work, the parents think of this as shameful; this leads to their cutting off ties with the outside world and hiding themselves away.”

The problem is not only in the thinking of these kinds of families. Kawakita also identifies a decrease in social acceptance.

“Every society includes some people who can’t work, and there have always been a certain number who don’t fit in. But there are very few support systems for them as adults in particular. The lack of social acceptance leads them to shut themselves off within their homes. In the postwar period, with the three supports of soaring growth, lifetime employment, and full-time housewives, everything appeared favorable as citizens moved around from the family to the school and to the workplace. This was what educational sociologist Honda Yuki calls the ‘postwar Japanese social circulation model.’ But in the 1990s, the three supports were no longer there. In a sense, it might also be that social change brought to light inadequate connections between the family and society that had been there all the time.”

In his book, Kawakita presents many real-life examples of families with adult children who are withdrawn from society. Often parents struggle onward for decades without asking for help before finally seeking advice when they reach old age. The idea of receiving public assistance or other support is hard to accept both for hikikomori and for their parents.

“Social judgement can be harsh, but recluses also have an internalized prejudice against receiving public assistance. They feel they can’t fall into a situation that they see as the end of the world. Trapped by their own prejudice against welfare, they are unable to look for help. But this brings an unnecessary deterioration in the situation, which may lead to a serious outcome like dying cut off from society. Independence doesn’t mean having zero reliance on other people, and moderate reliance on people and systems is reasonable.”

So, what should hikikomori and their families think, and how should they receive support?

“Kumagaya Shin’ichirō is an academic with cerebral palsy who conducts research on pediatrics and other fields at the Research Center for Advanced Science and Technology, the University of Tokyo. He advocates the concept of ‘independence through dispersion of dependence,” which is the idea that independence means increasing the number of people and places one is dependent on beyond the family. But there are limits to the availability of shelters for protecting parents from violent offspring and loans for covering immediate expenses, with social welfare as the final safety net. This means there’s the problem of not being able to depend on others.”

Kawakita offers a suggestion for troubled parents: “One thing that you can do right away as a parent is quite simple. It’s to find someone outside the home to talk about what’s going on inside it. This could be someone working in welfare or just an acquaintance. They might introduce a service you could use. Some might imagine these services as only used by a certain group of people in pitiful circumstances, but common services like free nurseries are also a part of the public welfare system. Everyone receives benefits of one sort or another from tax revenues. You should have the idea that it’s all right to make use of public welfare programs, and you should also create one or more points of dependence outside the family.”

Even when parents do finally seek help, though, their consultations may not go productively. Sometimes they are met simply with words like, “Please come again if there are any more problems,” without receiving any useful advice.

“When they have a bad experience in a consultation, some people lose heart and feel their pride has been hurt. For this reason, it’s not always appropriate to recommend going out and seeking advice. We promote the idea of being able to receive assistance, but those kinds of situations don’t help to cultivate this ability. Behind the feeling that they don’t want to cause problems for others, people may think that they don’t want others to cause problems for them. In a society where there is no longer the expectation of economic growth, people are liable to think more about the risks of personal relationships than about the benefits. It’s common now to talk about value for money. In our individual balance sheets, some people seem to be tormented by even small losses. In that sense, I believe there’s a need to come up with a form of support that provides clear benefits after the discussion is over.”

Kawakita notes, however, that support for families with hikikomori has changed. “In the past support for hikikomori was always conducted with particular targets in mind, and came to an end if these were not met. Especially if the socially withdrawn person in question refused support, progress became very difficult. But now there is also broader support for the wider needs of the whole family. As the diagram shows, each family member may have different information about opportunities to build outside connections. The first step is to share these.” 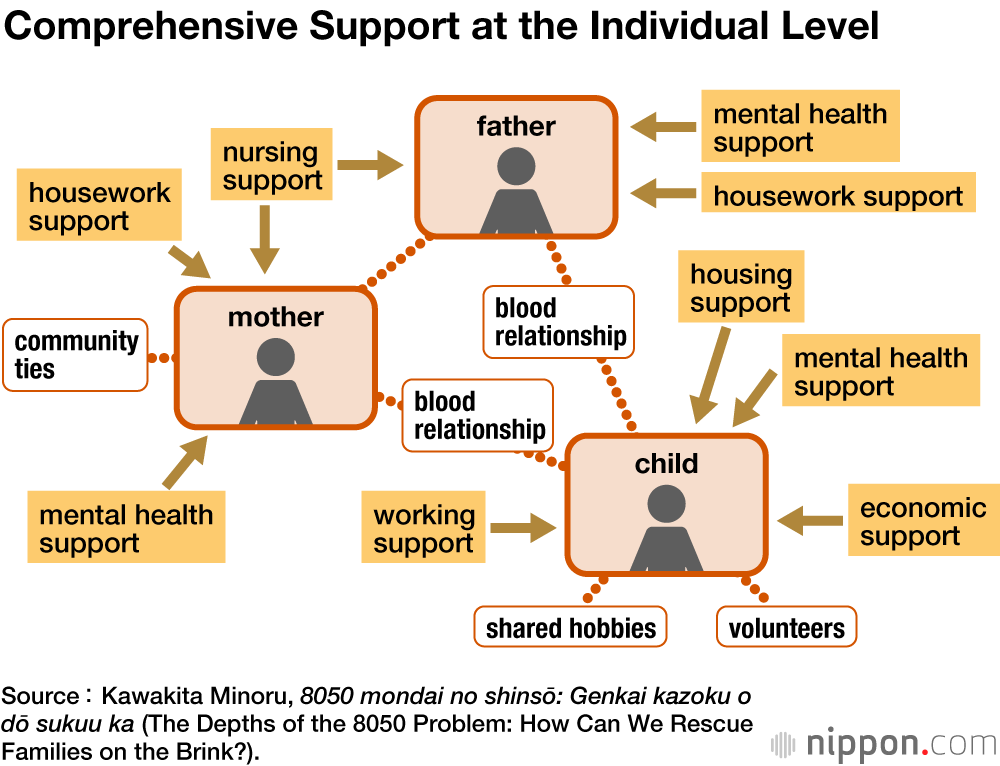 Kawakita continues, “Some people seem to be allergic to words like ‘support’ and ‘connections.’ But there are options for parents and others that don’t require the use of formal support programs. If a hikikomori is into a game like go or shogi, for example, they could look for another player and invite them to come by for a match. And parents needn’t have the idea that they must build burdensome connections with other people in the community so to deal with their hikikomori offspring. It can just be a matter of extending the scope of their ordinary interactions with neighbors and of keeping an eye on what’s going on in the neighborhood.

“It’s only to be expected that society will include some hikikomori and others who have fallen through the cracks, so to speak. I’d like people to recognize this and treat these others not as unusual cases but as fellow members of our society.”