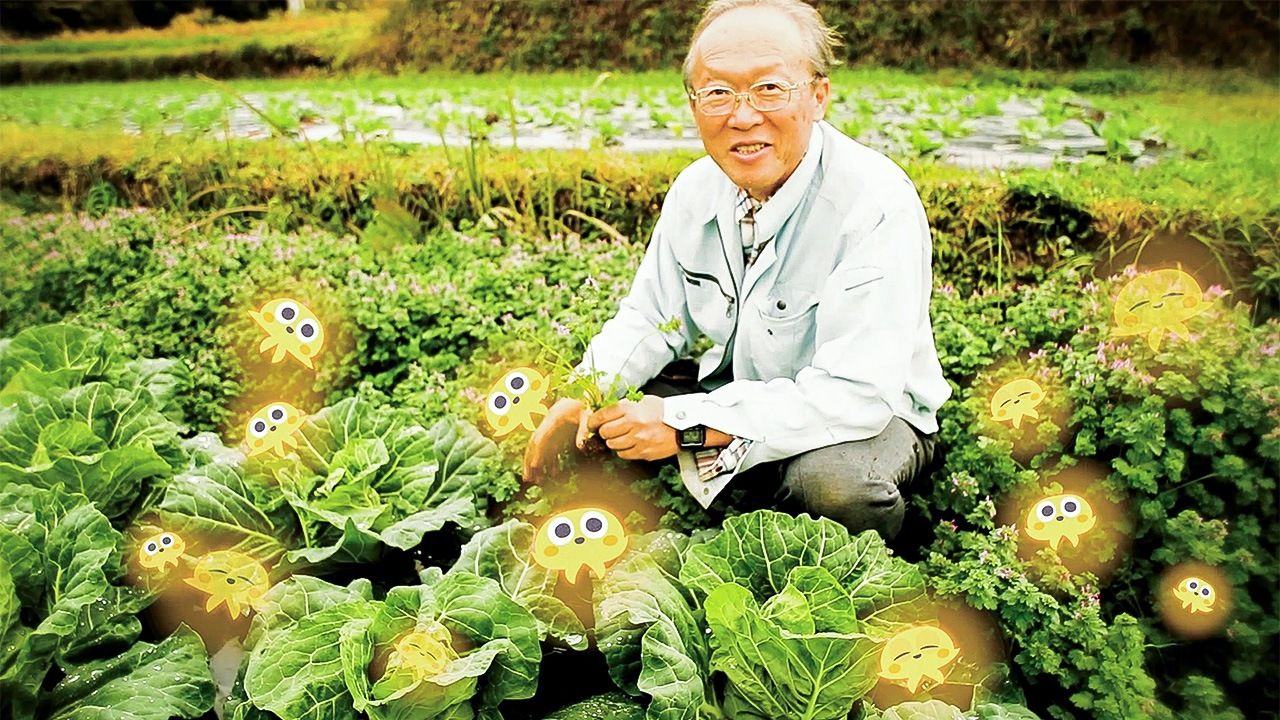 The Fermentation Prescription: Building Immunity from the Ground Up 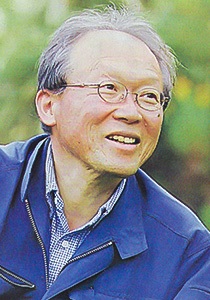 President of Kinchan Farm in Sasebo, Nagasaki Prefecture. Born in 1959. Received his master's degree from the Kyūshū University Graduate School of Agriculture. Worked as an agricultural extension officer for the Nagasaki prefectural government before resigning in 1996 to devote himself to organic farming. In 1999, founded the nonprofit organization Daichi to Inochi no Kai (Land and Life Society), dedicated to improving vegetable farming and human health through the use of recycled food waste. Author of Genki yasai-zukuri" chō nyūmon (Super Introduction to Healthy Vegetable Farming) and other works. Featured in the two-part documentary film Itadakimasu (Nourishment for the Japanese Soul).

Yoshida Toshimichi is a devout believer in the power of microbes. An agronomist by training, Yoshida has witnessed the health benefits of what he calls kinchan (friendly microorganisms) not only on the farm but also at the daycare centers and elementary schools that have adopted his methods. His pioneering work in early childhood education and nutrition has featured in a two-part documentary by director Vin Oota titled Itadakimasu (Nourishment for the Japanese Soul) , released in 2016 and 2020.

Spreading the Gospel of Kin

Yoshida began his career as an agricultural extension officer for the government of Nagasaki Prefecture, specializing in soil improvement. While still in his thirties, he quit his government job to devote himself to sustainable organic farming, with an emphasis on the use of recycled food-waste compost. Increasingly convinced of the environmental and health benefits of this approach, he embarked on a mission to spread the gospel of kin, or microorganisms, especially among the early childhood centers and schools in the region. Today dozens of daycare centers, including half of the facilities in the city of Kurume, Fukuoka Prefecture, have taken Yoshida's advice and begun growing their own organic vegetables. Many also incorporate those vegetables into their school lunches along with fermented foods and dried fish, in a revival of the traditional Japanese diet. 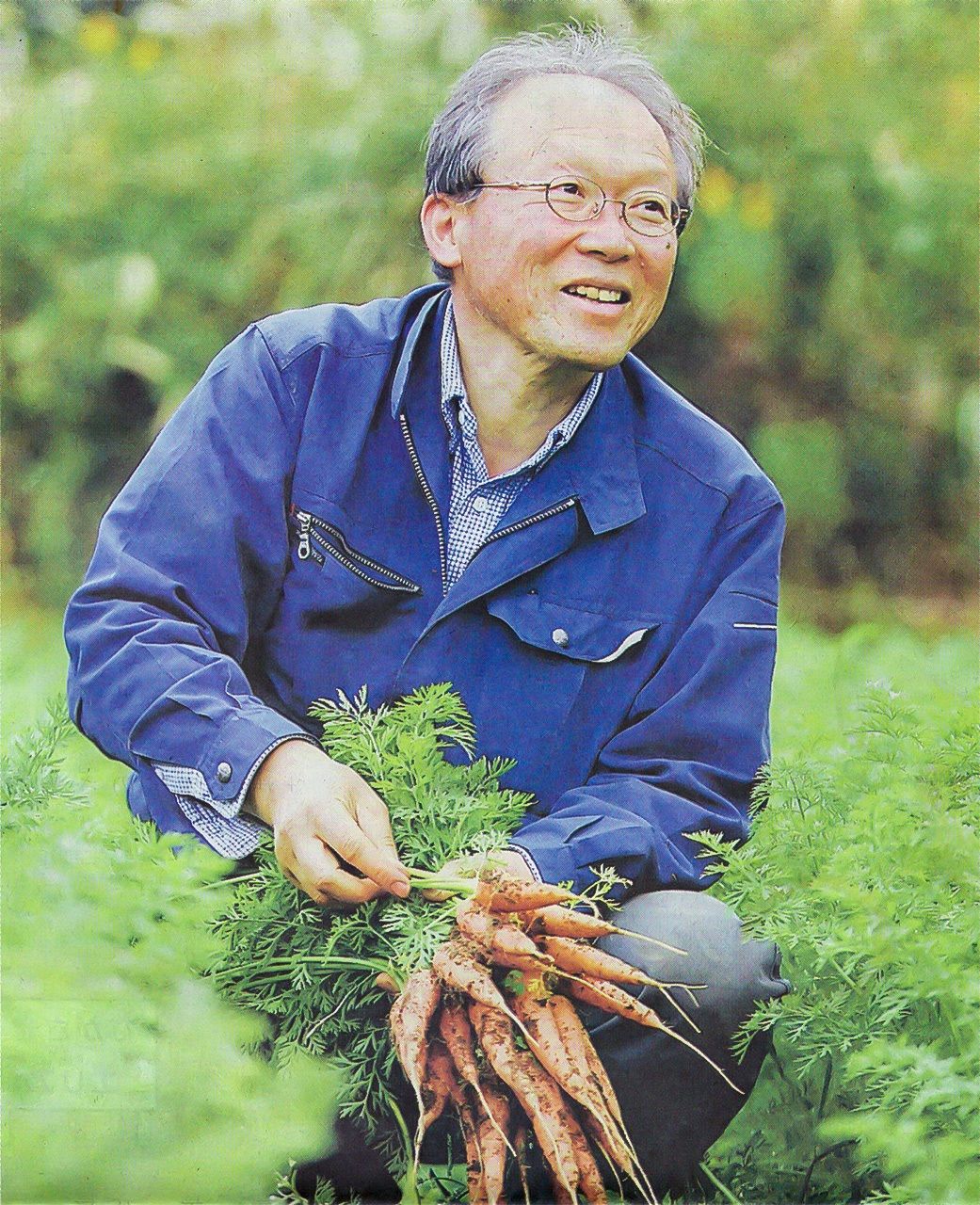 Mamī Nursery School in Sasebo, Nagasaki Prefecture, embarked on such a program in 2006. The center began cultivating its own organic vegetables using fermented compost made from recycled food waste. School lunches incorporate the vegetables, along with traditional Japanese fermented foods, such as miso and pickles. The children participate actively in recycling, cultivation, pickling, and even miso making. Two years after the program was launched, absences due to illness had dropped from an average of 5.4 days to 0.6 days per year. 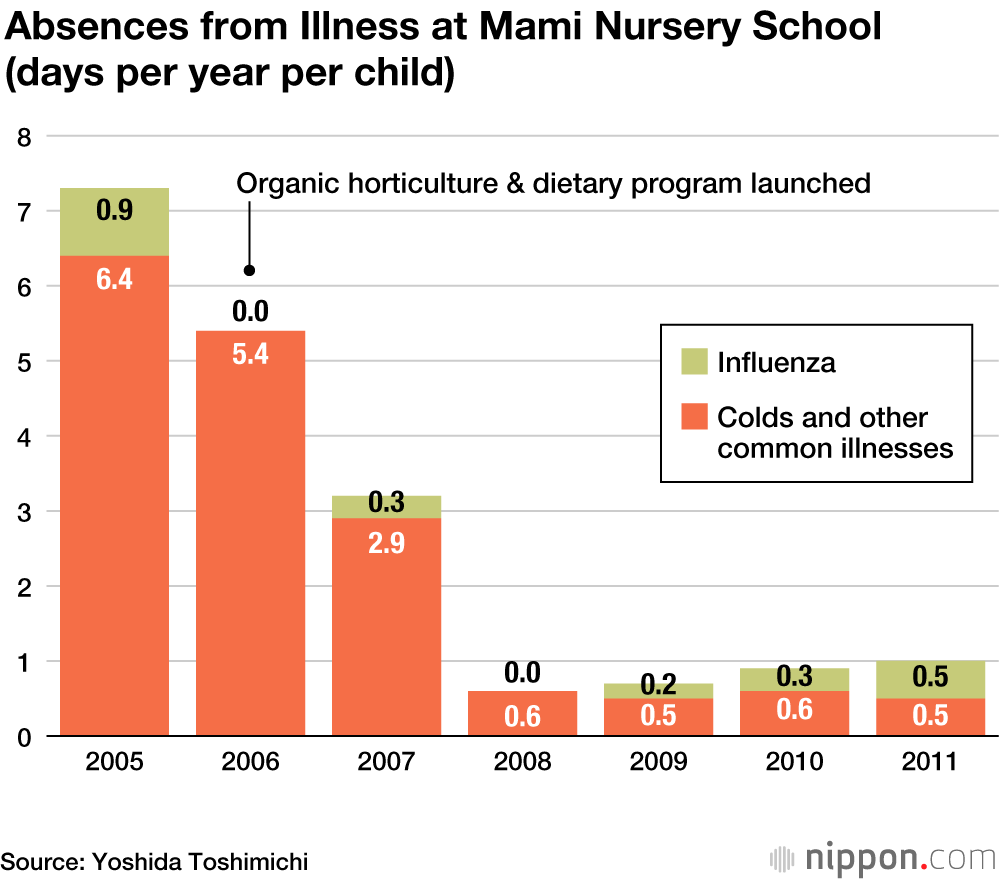 The common thread, as Yoshida sees it, is the critical role of friendly microorganisms, a lesson he learned in the context of soil improvement. Years of experience convinced Yoshida that soil fertilized with compost made from fermented food waste yielded hardy, disease-resistant vegetables. And he saw no reason why the same basic principles should not apply to people.

The Magic of Fermented Compost

One might be forgiven for thinking that the inevitable price of pesticide-free farming is worm-eaten produce. Not so, insists Yoshida. In his own experience, vegetables grown with fermented compost are highly resistant to insect damage. He found that when cabbage worms were released into a cabbage patch, they gravitated toward the wilted and sickly plants, leaving the robust and healthy ones undamaged. The pictures tell the story. 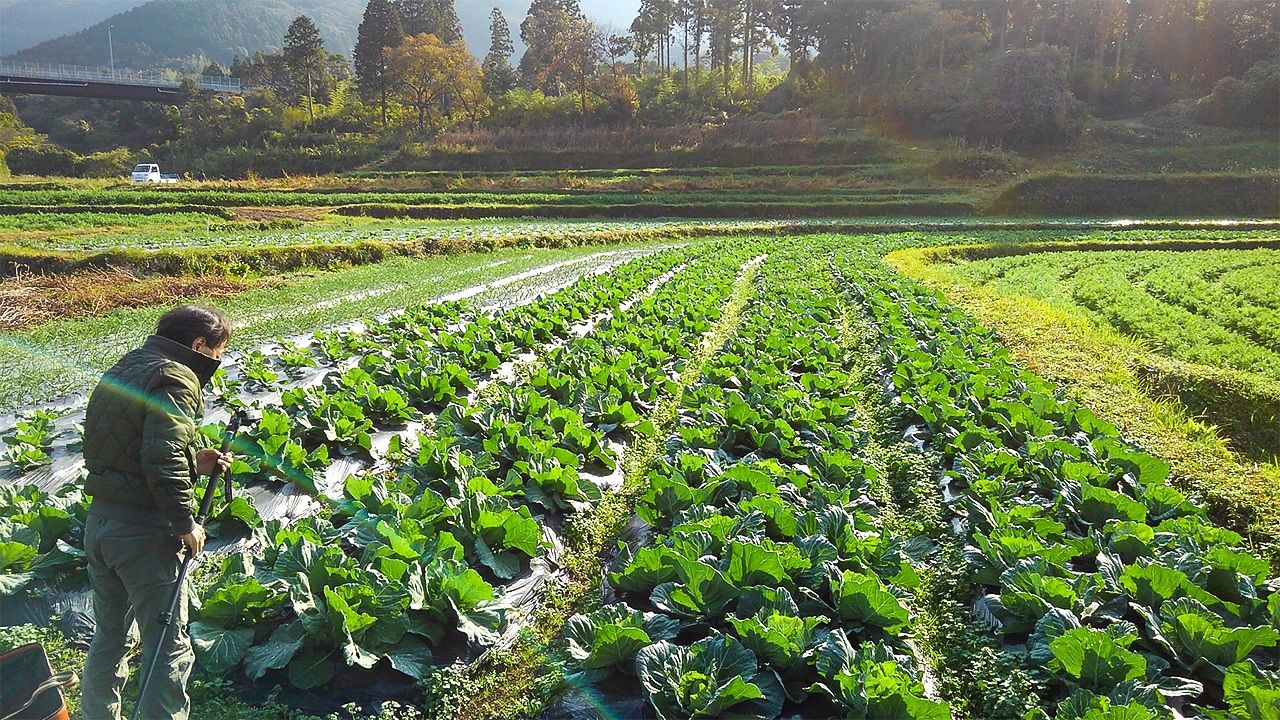 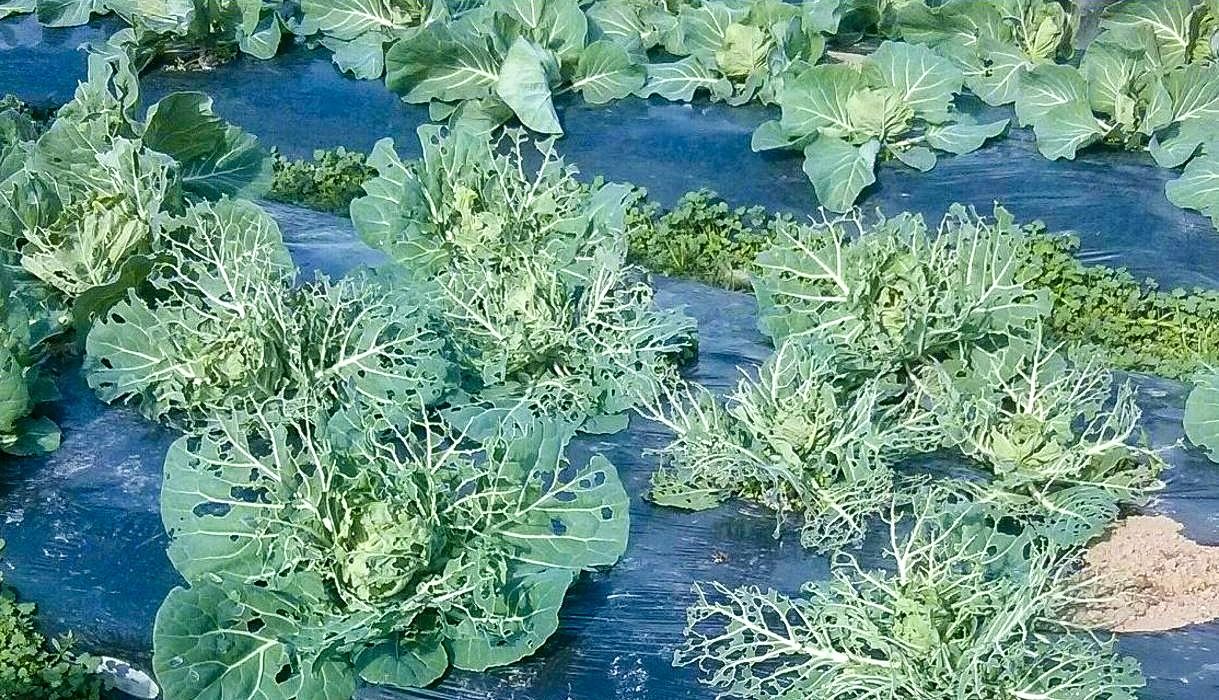 But how does fermented compost yield hardy, insect-resistant vegetables?

"The fermentation bacteria in the compost improve the soil by breaking down the organic matter there," Yoshida explains. Plants grown in this nutrient-rich soil are full of compounds called phytochemicals that defend against disease and insects.  At the same time, the friendly bacteria in the compost create a soil environment hostile to destructive, disease-producing microorganisms.  "On the other hand," Yoshida stresses, "soil can contain putrefactive bacteria that degrade its quality. And the repeated use of agrochemicals can upset the microbiota in the soil, which leaves plants susceptible to disease and insect pests."

Yoshida's hunch that the same general principles applied to the human body was borne out  by published research.

Scientists have known for some time that bacteria that normally thrive in the human intestine—often referred to as gut flora—create an environment hostile to pathogens (disease-causing microorganisms) that can make their way into the digestive system via food or water. They are also finding that gut flora play an essential role in "teaching" the immune system what to attack and what not to. As much as 70% of the immune system is located in the gut. The diverse bacteria that reside there are essential to strengthening and regulating the immune response.

The key to a healthy immune system, in other words, is maintaining a diverse and balanced gut microbiota. Lactobacilli and other friendly microbes found in naturally fermented foods can help maintain a healthy environment in the gut, just as they do in the soil. "The microorganisms in foods like miso and soy sauce help boost and balance your gut flora," says Yoshida. Organic vegetables, meanwhile, provide the micronutrients and fiber on which those friendly bacteria thrive. In addition, phytochemicals found in vegetables—especially, fresh organic vegetables in season—are thought to guard against inflammation, which is associated with cancer and various chronic diseases.

A third essential element of a healthy gut and immune system, notes Yoshida, is minerals. "You can get the minerals you need from foods like seaweed, anchovies, whole grains, unrefined vegetable oils [such as olive, flax seed and perilla oils], tōfu, and black salt," he says.

In short, Yoshida believes that the three dietary pillars of a strong immune system are fermented foods, high-fiber organic vegetables, and marine and soy products rich in minerals and micronutrients—all elements present in the traditional Japanese diet. And he has seen the benefits first-hand.

In 2012, under Yoshida's guidance, Nio Elementary School in Mitoyo, Kagawa Prefecture, launched a program aimed at boosting students' resistance to viral infections with the aid of a healthy diet. In addition to fermented foods and plenty of seasonal vegetables— prepared to maximize nutritional value—the kitchen began using a natural seasoning made from powdered dried fish (anchovies and flying fish), konbu kelp, and dried shiitake mushrooms. Children and their families were taught the principles of nutrition and healthy eating, including chewing each mouthful of food at least 30 times,

"You can see the difference in as little as four weeks," says Yoshida. Parents have noticed positive changes in the texture of hair and nails and the consistency of stools. Teachers and parents alike testify to behavioral as well as physical benefits; the children seem less distracted, cranky, hyperactive, and quarrelsome. This observation accords with a growing body of evidence suggesting that the makeup of the gut microbiota can impact emotional as well as physical health.

Steps to a Healthier Immune System

Like his farming techniques, Yoshida's dietary guidelines draw on centuries of Japanese folk wisdom but are supported by modern science. During a March 2020 online symposium titled Kiseki o okosu kosodate (Parenting that Works Miracles), Yoshida offered the following pointers for strengthening and regulating the immune system, beginning with the gut.

Yoshida also views food-waste recycling and organic farming as a way for human beings to rebuild their spiritual connection with nature, as he explains in his book "Genki yasai-zukuri" chō nyūmon (Super Introduction to Healthy Vegetable Farming): "The experience of taking part in nature's organic cycle gives rise to a comforting sense of being sustained by the earth. It fosters gratitude toward the land and the food we eat and can even nurture an awareness that nothing in this world is without its purpose."

At a time when humanity and nature seem locked in conflict, Yoshida's message has truly begun to resonate.