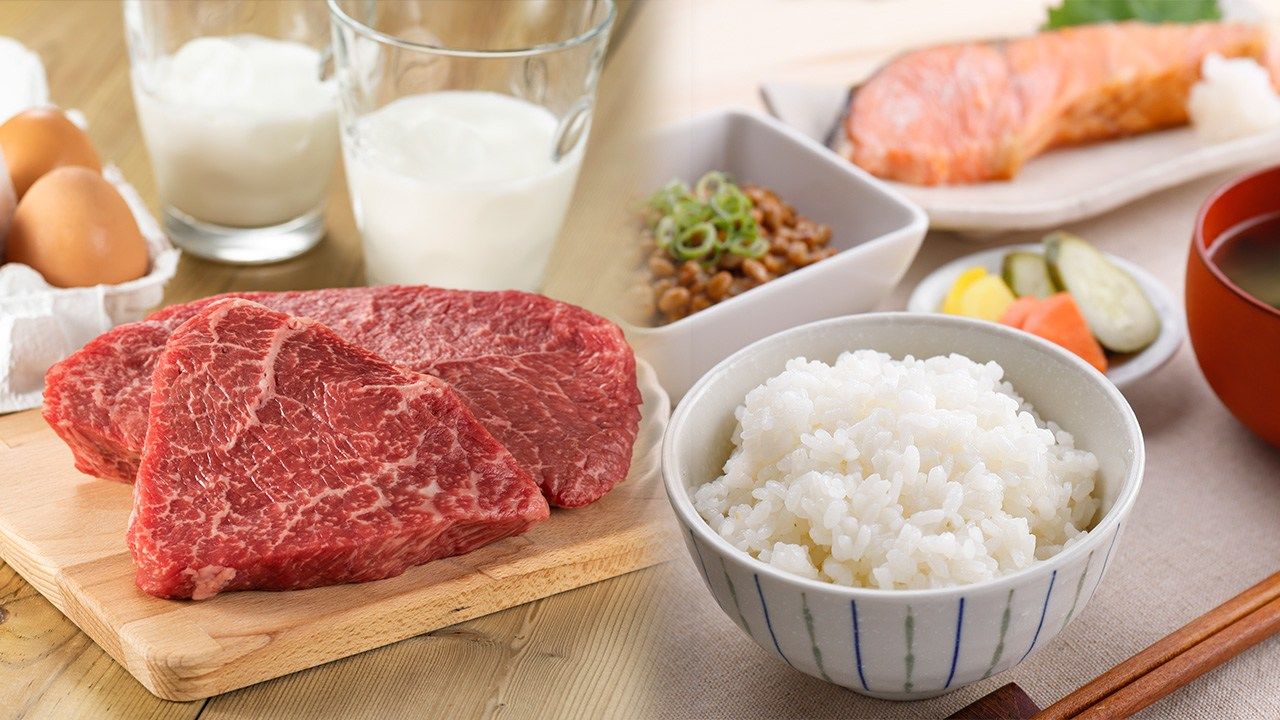 Nutrition and the Wisdom of Ethnic Cuisine: A Japanese Doctor’s Perspective

Science Lifestyle Culture Health Food and Drink Sep 11, 2020
When it comes to healthy eating, one size does not fit all. Japanese cooking, with its emphasis on rice, fish, and vegetables, may not be the best diet for everyone, but it is marvelously suited to the physiology of the Japanese, writes physician and writer Okuda Masako.

The popularity of Japanese cuisine has soared in recent decades, and one reason is undoubtedly its healthful image. The average lifespan of the Japanese people climbed rapidly after World War II. By around 1980, Japan had the highest life expectancy of any country in the world, and it still ranks near the top. (The world’s oldest living person is also a Japanese woman.) Amid a slew of investigations into the secrets of Japanese longevity, attention quickly centered on the benefits of washoku, traditional Japanese cooking.

My research and experience have taught me that the optimal diet depends on a variety of hereditary and environmental factors. But there is no denying that washoku has contributed to the health and longevity of the Japanese people. Let us begin by examining how.

In terms of health and long life, the biggest physiological factor the Japanese have going for them is a low risk of atherosclerosis. Atherosclerosis occurs when fats and other substances build up along the walls of arteries, restricting or even blocking blood flow. In the brain, such a blockage is known as a cerebral infarction (stroke); in the heart, it is called a myocardial infarction (heart attack). The incidence of myocardial infarction in Japan is among the lowest in the world.

Scientists believe that both genetics and diet play a role in protecting Japanese arteries. One factor is a high level of “good cholesterol,” or HDL (high-density lipoproteins), in the blood. In a 2008 study, Japanese HDL levels were found to be roughly 10% higher than those of white Americans on average. Another reason is that fish is a big part of the traditional Japanese diet, and fish contains EPA (eicosapentaenoic acid) and DHA (docosahexaenoic acid), two polyunsaturated fatty acids that help prevent hardening of the arteries. Since ancient times, the Japanese have been eating oily fish like mackerel, sardines, yellowtail tuna, and eel, which are abundant off the coast of Japan and are rich in EPA and DHA. In a 2015 study, the average concentration of DHA in Japanese maternal milk was determined to be up to six times that found in Western countries and about twice that found in China.

A second major contributor to Japanese health is the gut microbiota, the many and varied microorganisms living in the intestinal tract. A 2016 analysis of the intestinal microbiota of subjects from 12 countries found that the Japanese had the highest counts of beneficial bifidobacteria. (Interestingly, the gut microbiome of the Chinese subjects was closer to that of the Western subjects studied.) This can probably be attributed to the high fiber content of the traditional Japanese diet, with its emphasis on grains and vegetables. Dietary fiber provides a good nutritional environment for beneficial microbes and helps cleanse the gut of the harmful substances that unhealthy bacteria produce. Since it takes a generation or more to permanently alter the gut microbiota, today’s Japanese probably owe their intestinal health to the dietary habits of their parents and grandparents.

All of this might lead one to the conclusion that eating washoku will automatically make one healthier. Unfortunately, it is not quite so simple. In general, the traditional diets that developed in various parts of the world were optimally adapted to the local environment and the needs of the native population. The physiology of the native population, in return, adapted to the diet.

There are obvious physical differences between Japanese people and Westerners. But the differences go beyond hair texture and eye color. There are also disparities in musculature, body fat, and body temperature, as well as various factors that affect digestion and metabolism of alcohol: hormone and enzyme secretion, the shape of the stomach, the composition of the gut flora, and so forth. Race is not just skin-deep. 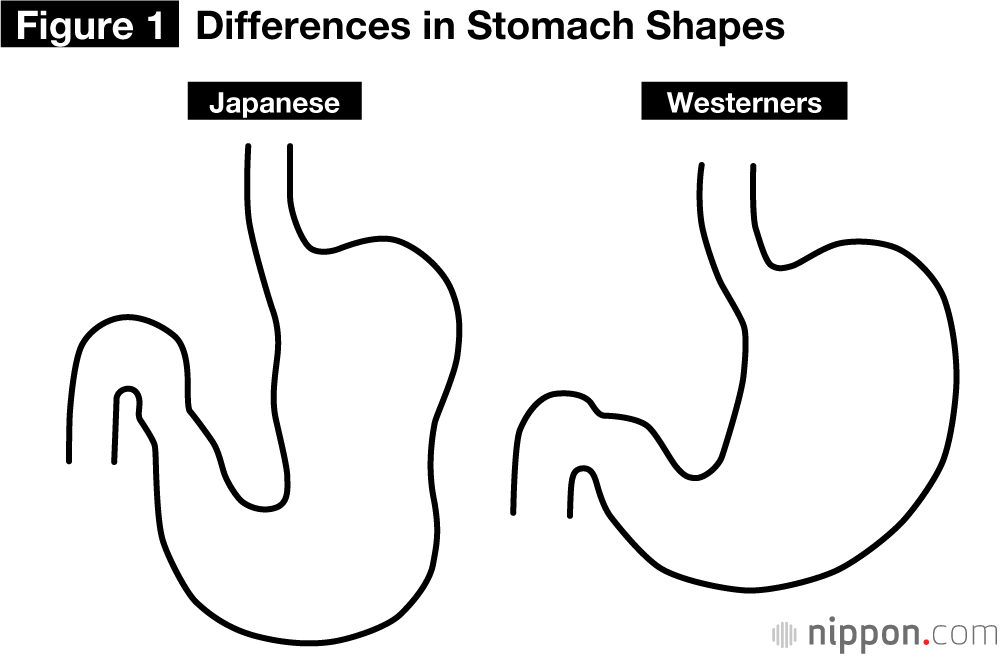 The Japanese stomach is adapted to consumption of grain.

Figure 1 illustrates the stomach shapes typically found in Japanese people on the one hand and people of Westerners extraction on the other. The differences are the result of disparities in the traditional diet.

The Japanese have long relied on rice and other grains as their dietary staple. Grains are a good source of energy, but whole grains in particular take time to digest because of their high fiber content. The Japanese stomach is vertically elongated so as to store, mix, and break down such food before it continues on into the intestines. The intestines, in turn, are rich in the kinds of bacteria that help digest and extract nutrition from starchy foods.

By contrast, the traditional European diet, with its emphasis on meat and dairy products, is considerably higher in protein and fat. Since protein and fat are digested primarily in the intestines, the food needs to move more rapidly from the stomach to the gut. The digestive system evolved to deal with these demands. For example, a large quantity of stomach acid is produced so that the stomach can process the food quickly; comparatively thicker stomach muscles then push it smoothly into the intestines. Plenty of enzymes and other fluids are secreted to aid the digestion of fat and protein inside the intestines.

It has long been known that the ability of adults to digest milk varies by ethnicity and region. The body’s capacity to digest the lactose in milk hinges on continued production of the enzyme lactase. The map in figure 2 shows the global distribution of lactose-intolerant adults in various parts of the world, with higher concentrations indicated by darker shades. While most people in the British Isles and Scandinavia digest milk easily, close to 90% of adults in Southeast Asia and East Asia (including Japan) have trouble with it. 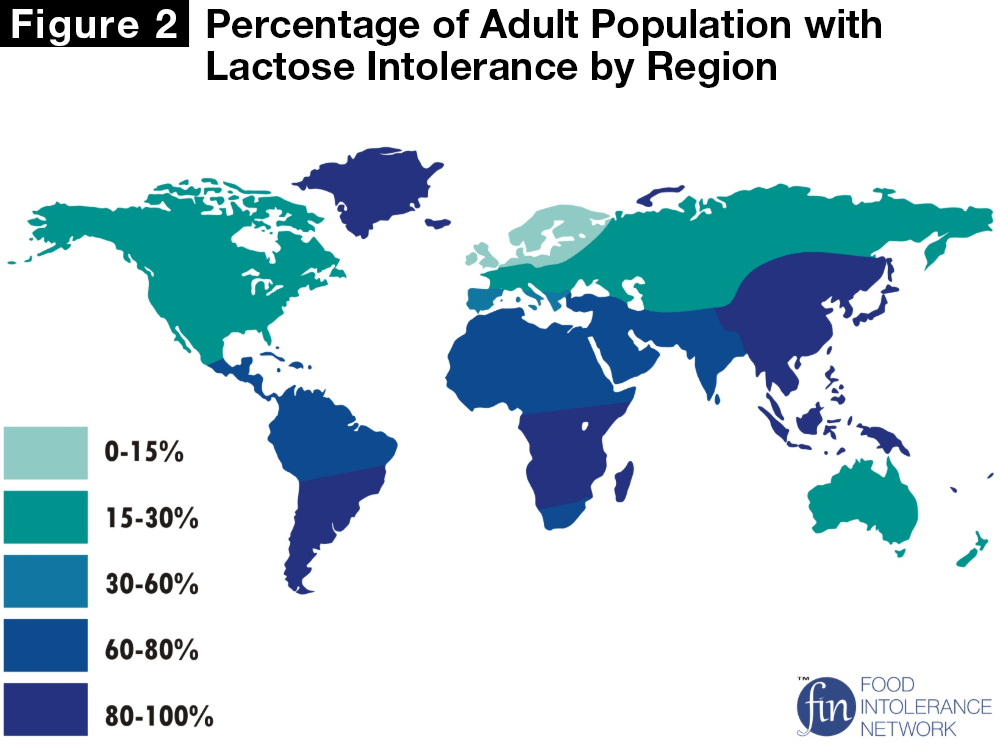 Such differences in physiology can translate into serious health problems when people adopt different diets and lifestyles. One example involves vitamin D, which is essential to bone health, among other things. Vitamin D is produced inside the body when the skin is exposed to the sun’s ultraviolet rays, but it can also be obtained from dietary sources like oily fish. It has been suggested that Africans, who evolved in a part of the world where year-round UV exposure is high, may be less well equipped to absorb vitamin D from dietary sources, and this may be why African Americans tend to have relatively low vitamin-D levels. Some experts have warned that African Americans need to adjust their diets to avoid health problems resulting from vitamin D insufficiency. The optimum diet for any person depends on genetic makeup, as well as lifestyle and environment.

Genetics also influences the way our bodies accumulate fat. One characteristic of the Japanese constitution is the tendency to accumulate visceral adipose tissue, or fat inside the abdominal cavity, as opposed to the subcutaneous fat that collects under the skin. Unfortunately, visceral fat is the more worrisome kind. 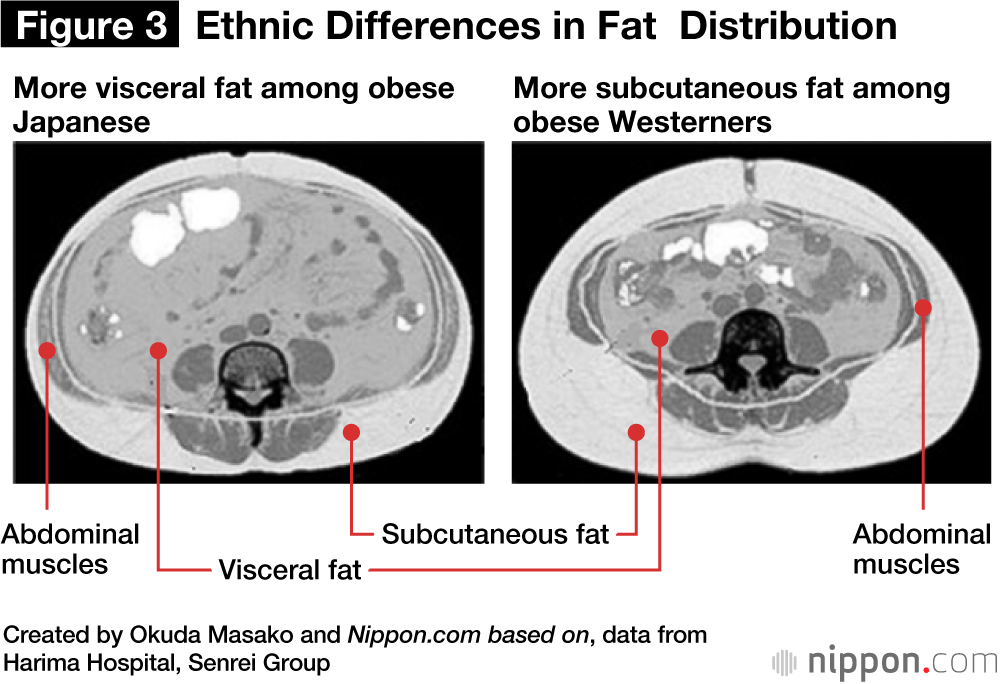 This is a fairly recent phenomenon, mind you. In earlier times, obesity was relatively rare in Japan, and the incidence of chronic diseases associated with visceral fat—including type 2 diabetes, along with other diseases like breast cancer and colon cancer—was correspondingly low. That began to change in the 1960s to 1980s, as the Japanese diet became increasingly westernized, leading to higher fat consumption and lower intake of fiber. And with more people doing deskwork and leading sedentary lifestyles, lack of exercise contributed to the rise of obesity and the accumulation of visceral fat. The result has been a significant increase in disease, raising concerns for the future.

Extensive studies have revealed that a traditional Japanese diet—low in meat and dairy products, high in soybeans and fish, and high in fiber from grains, vegetables, and seaweed—is tied to very low accumulation of visceral fat. In other words, washoku is ideally suited to the physiological traits of the Japanese people, protecting them from their innate tendency to accumulate visceral fat. Without knowing the science, our forebears managed to develop, preserve, and pass down a dietary culture perfectly adapted to our own metabolism.

Washoku has other health benefits as well. Soybeans, green and yellow vegetables, and small fish eaten whole all help to build strong bones. Lifelong consumption of soy foods also contributes to the relatively low incidence in Japan of diabetes, breast cancer, and colon cancer, all ailments linked closely to visceral fat levels, as compared with the West

One notable weakness of the Japanese diet as it has developed in the past two or three centuries is the overwhelming preference for polished rice. For the health-conscious, I would recommend brown rice, which has seven times the dietary fiber of white rice and contains substances that help the body burn visceral fat.

In recent years, science has made considerable progress in identifying genetic differences among ethnic groups. In 2016, a Japanese team of researchers released the first Japanese reference genome panel (JRG v1), a whole-genome assembly representing the genes of a “typical” healthy Japanese. Comparison with the human reference genome has revealed millions of single-nucleotide differences, many of which doubtless reflect significant differences in nutrition physiology. We need to abandon the one-size-fits-all approach to nutrition and consider what diet works best for each ethnic group.

Nowadays, the Japanese people are able to enjoy delicious cooking from every part of the world. That is a splendid thing, as long as we keep in mind that washoku is the bedrock of our much-admired health and longevity.

(Originally written in Japanese. Banner photo: Dairy and meat products figure heavily in the Western diet, while the traditional Japanese diet has much to offer in the area of human health. © Pixta.)