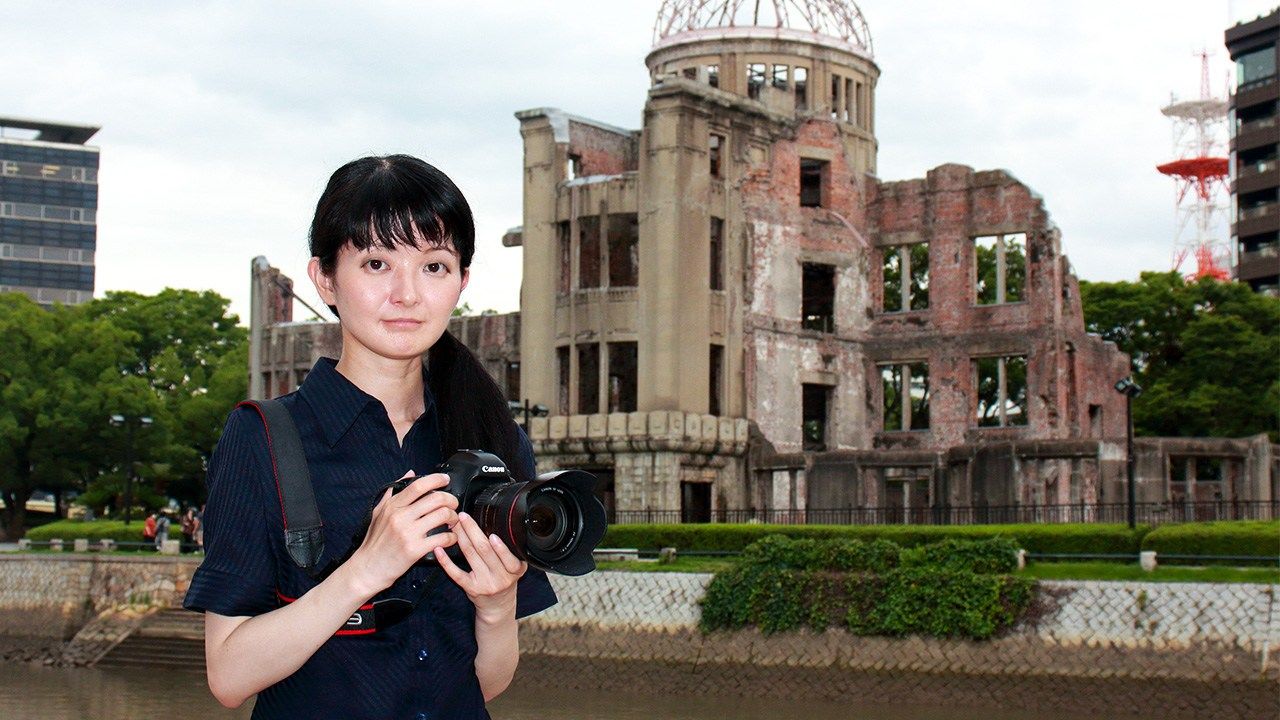 A Testimony to the Hibakusha: Photographer Dōune Hiroko and Her Hibakusha Family Portraits

Society Aug 5, 2020
The youngest survivors of the 1945 atomic bombings in Hiroshima and Nagasaki have children, and now, grandchildren. Photographer Dōune Hiroko is pursuing a project to photograph all three generations as a testimony for posterity of the hibakusha experience. A native of Hiroshima, Dōune has so far photographed 90 hibakusha families and is currently exhibiting her family portraits in cities throughout Japan.

It is July 3. Dōune Hiroko and her family are busy hanging photos in the lobby gallery of a Tokyo Shiodome high-rise in preparation for the exhibit to start the next day. The exhibition title: Ikite, tsunaide (Surviving and Connecting) The photos are intended to convey the story of the hibakusha to their third generation—including children born long after the atomic bombings—and are part of a project on war and peace and the preciousness of human life.

The exhibit was originally scheduled in May for the cities of Osaka and Kure, Hiroshima Prefecture, but both events were cancelled amid the spread of COVID-19, and the July exhibit to be held in Fukuoka Prefecture was postponed. “People are reluctant to go out and we’re opening with very little publicity, so there’s no telling how many will actually come to see this exhibit,” says Dōune through her requisite facemask. “We just have to do what we can.”

The year 2020 marks the seventy-fifth year since the atomic bombings. August has always been a time of reflection in Japan on the war years, and it only seems fitting that this exhibit will continue throughout this time of remembrance.

Dōune’s daughter helps her mother hang the photos for the exhibit in Shiodome, Tokyo.

Making the Hibakusha Memories Our Own

Why the focus on the third generation? Dōune explains: “It’s more than seven decades since the atomic bombings, and those of my generation have little interest in issues of war or peace.

“For example, I don’t think it is easy for my generation to relate to the stories told to us by the hibakusha, to grasp those stories as if they were our own. We have never known war, and it’s hard for us to work up sincere emotions when we visit the atomic bombing sites. So what needs to be done? It occurred to me that we need something that’s closer to home, something intimate to which we can relate—and that means family. We can relate to and empathize with family members. In fact, only families may be able to listen to and truly absorb the as-yet untold stories of their hibakusha members.”

The people and families in the photos are a random selection, some introduced to Dōune by friends and acquaintances, others responding to her online call for subjects. For every photography session, Dōune sets aside time for the hibakusha grandfathers and grandmothers to talk to their grandchildren about their experiences. These stories are included in the captions for each of the family portraits on display. 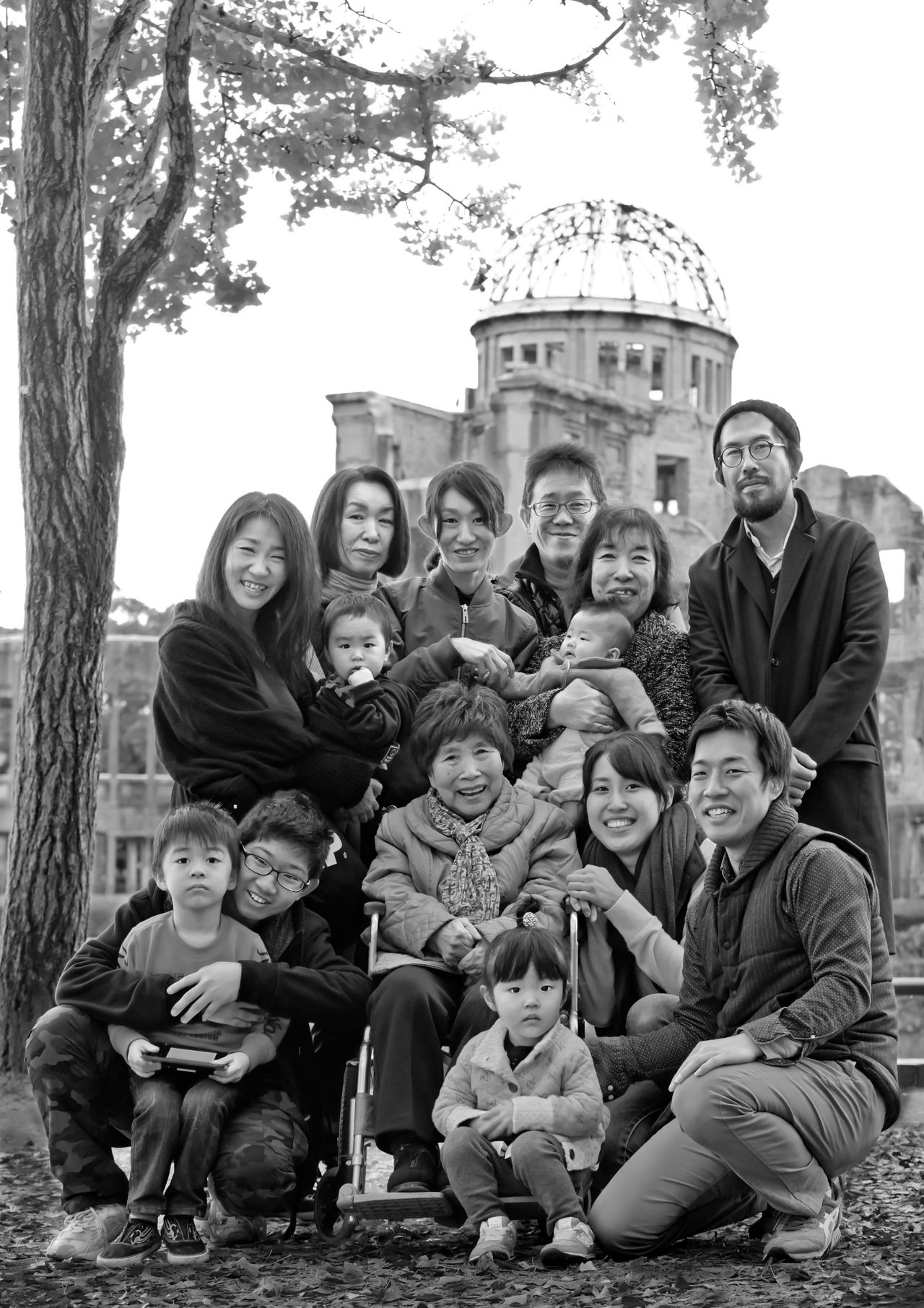 November 2016. In this four-generation photo, a third-generation couple, their respective hibakusha grandmothers, their mothers, their siblings, and their children pose with the Hiroshima Atomic Bomb Dome in the background. As she printed this photo, Dōune says, it hit her that all these lives were made possible because the two great-grandmothers survived. This photo provided one of the incentives for the launch of her project. ©Dōune Hiroko

Dōune has had a keen interest in the issues of war and peace since she worked as a high school volunteer at the Peace Memorial Ceremonies.

“I grew up in Hiroshima. It was common at the local public bath to see old ladies with keloid scars on their backs. I remember one old relative who insisted on showing me her scars every time we happened to meet. When I was small, I was repulsed and frightened, but something in me changed in third grade, when I participated in a peace camp and heard stories about war that had nothing to do with the atomic bombing. I began to sense that this had as much to do with me as anyone else, and I decided to stop avoiding the subject.”

After graduating from high school Dōune made her way to Tokyo, where she worked in jobs including as a photographer’s assistant and manager of a photo developing lab. Every vacation she got, Dōune travelled throughout Japan photographing war sites. In 2011, following the Great East Japan Earthquake, she returned to her hometown of Hiroshima and set up her own on-site photography business.

Dōune longed to get involved in some kind of activity to promote peace. What could she do? What kind of theme should she pursue in her photography work? By 2015, the year marking the seventieth anniversary of the atomic bombings, she was feeling frustrated at her own indecision, but then the words of an old high school friend opened up the way. “Why not photograph me? I’m the third-generation descendant of a hibakusha. Maybe you’ll get some ideas while shooting me and my family.”

Her early attempts were tentative and fumbling, and she had trouble finding her focus. Critics were quick to point out that her photos were no different than general family photos. “You need to capture the anger and sorrow of the hibakusha,” she was told. Dōune remained undeterred, though, and as she continued the project she made a new discovery.

“As the hibakusha grandparents tell their stories, there’s a distinct moment when the expressions change on the faces of the grandchildren and other family members. I gradually became adept at spotting that moment as I looked through the viewfinder. I think of it as the moment that the hibakusha’s story becomes the grandchild’s story. It’s a rewarding moment for me, too.”

After five years, Dōune says, she has also come to realize how little attention grandchildren pay to what those of the older generation are telling them. Of course, every family is different. Many third-generation children want to know about the war, but are hesitant to ask questions about such a heavy topic.  Initially, Dōune only thought she needed to provide an impetus for the family members to talk with each other. Later, however, she purposely took care to allow plenty of time for such conversations to develop. 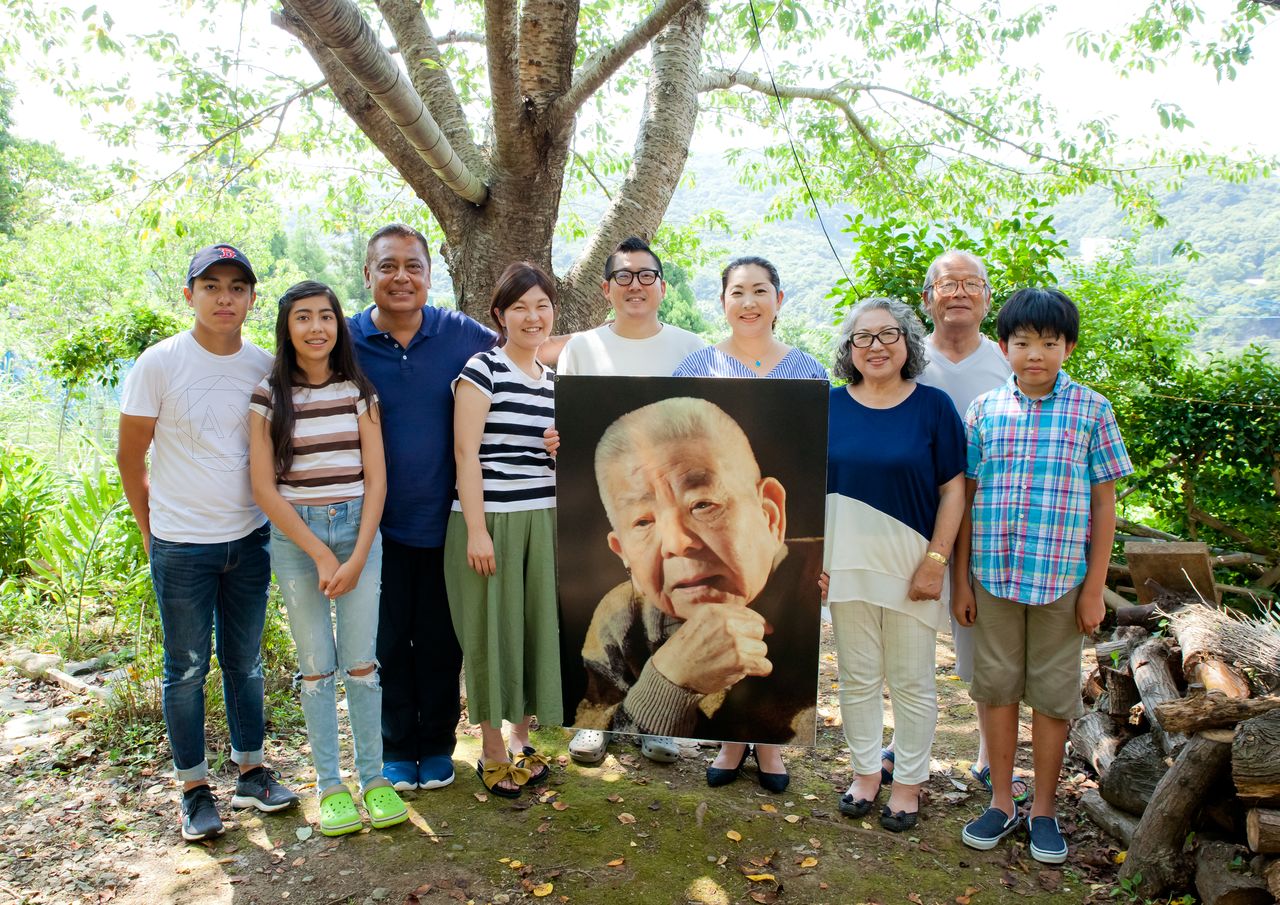 August 2017. Family members hold a large portrait of Yamaguchi Tsutomu, who survived the bombings of both Hiroshima and Nagasaki. Yamaguchi become a hibakusha storyteller at the age of 90 to give witness to the horror of the atomic bombings. He died in 2010 at the age of 93. His family intends to carry on their grandfather’s wishes. “As members of a hibakusha family,” they say, “we will continue to call for the abolition of nuclear weapons and permanent world peace.” ©Dōune Hiroko 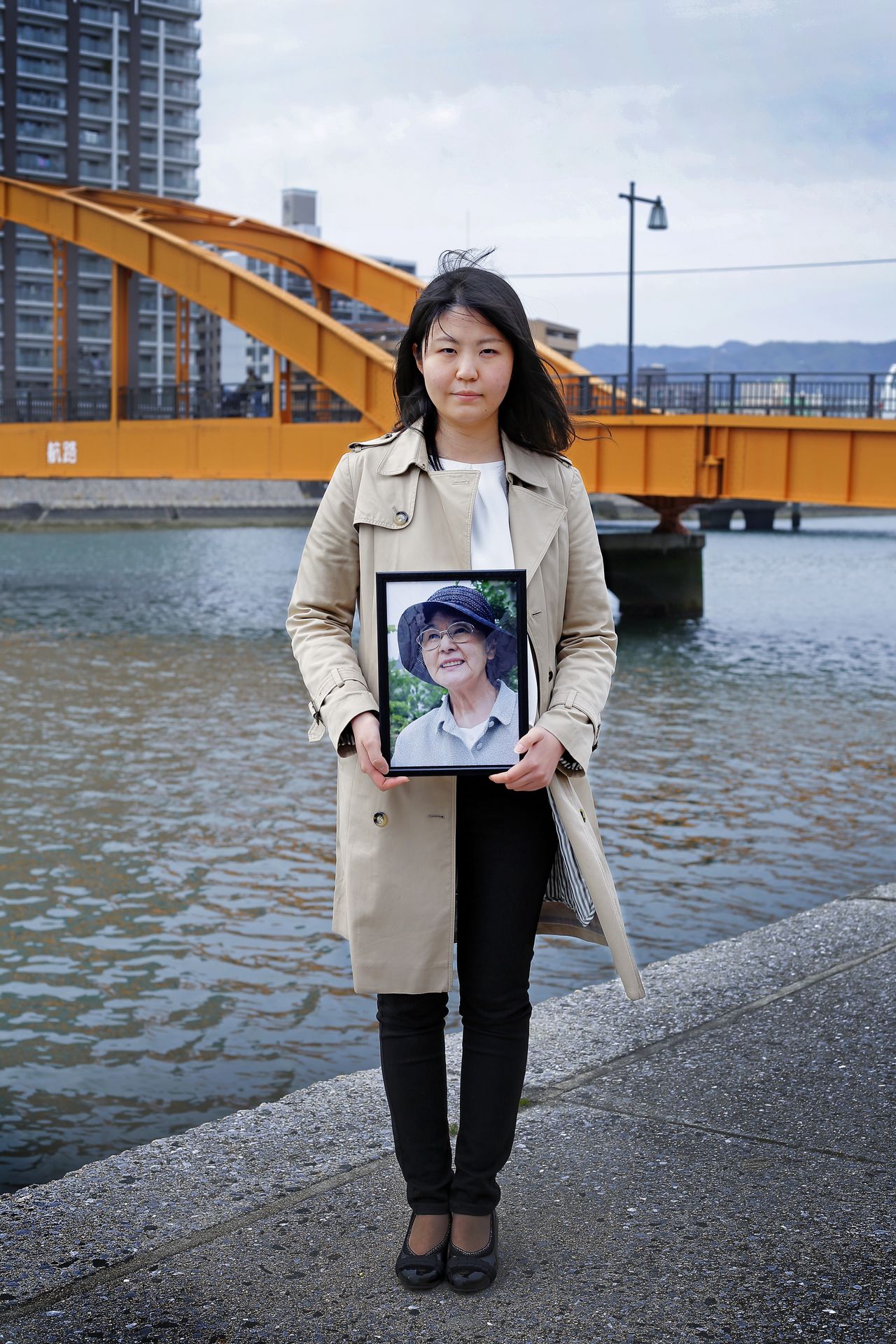 March 2019. A granddaughter poses with a photo of her hibakusha grandmother on Sumiyoshi Bridge, 1.4 kilometers from the epicenter of the atomic bombing on Hiroshima. The grandmother was 16 and working in a factory when the bomb was dropped. She left a journal describing the many bodies she saw floating in the river here as she walked through the city center in search of her family. ©Dōune Hiroko

Documenting the Lives that Were Lived

“We are the last generation to have the opportunity to directly hear the stories of our hibakusha grandfathers and grandmothers,” says Dōune as she explains her work. She wants her project, combining storytelling with family portraits, to provide the connection that will carry on the stories told by the hibakusha survivors. At the same time, she sometimes feels that maybe just getting the family photos taken is enough.

This change in her thinking, she says, is because most recently there have been a number of cases when she was unable to take the requested family portraits because the hibakusha grandparents became too ill to participate. Not a few of the hibakusha she photographed over the five years of the project have since died as well.

“I think it’s important for the grandchildren to see themselves in the photos with their grandfather and grandmother. The family portrait conveys a direct sense of their connection, of the life that is carried on from one generation to the next. The family portraits are also a testimony to the hibakusha’s life, and that may take on special meaning ten, twenty years from now.”

Dōune, too, has grown thanks to this project. “I learned something from each of these encounters. I see myself changing as I watch these families change and evolve through my photography,” she says. Hers is a journey to document life, she says, and she confirms that she will continue.

Information on the Tokyo Exhibit