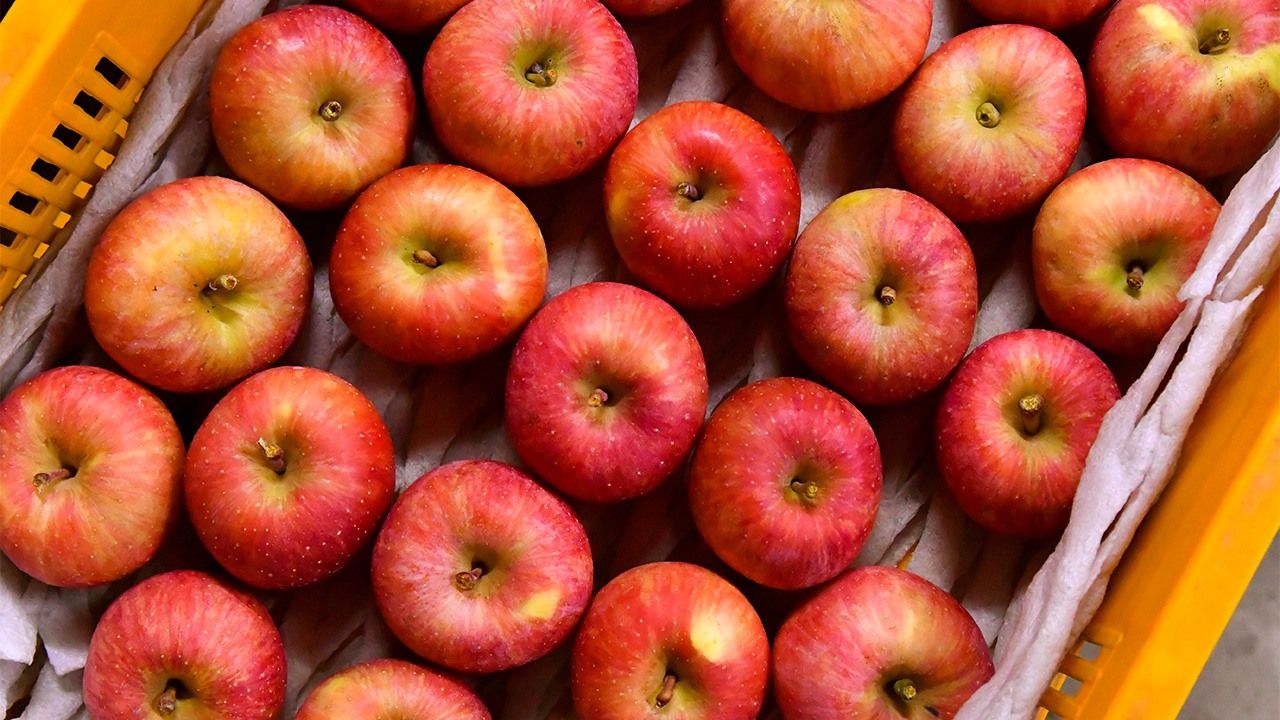 Society Lifestyle May 17, 2021
Fukushima is an agricultural prefecture, but 10 years after the Fukushima Daiichi nuclear accident, growers are still struggling against lingering stigmas about the safety of farm products from the prefecture. Although faced with enormous challenges, producers have continued to work to shift consumer sentiment.

Winter—brewing season—is a hectic time for the many sake producers nestled across the western Aizu region of Fukushima Prefecture. At the long-established Yamatogawa brewery in Kitakata, billows of steam rise into the chilly air from a batch of freshly cooked rice. A junior employee hurriedly scoops out the glutinous grains in preparation for the next step in the brewing process. In time, the highly polished rice will yield an aromatic and delicately flavored ginjō-shu. 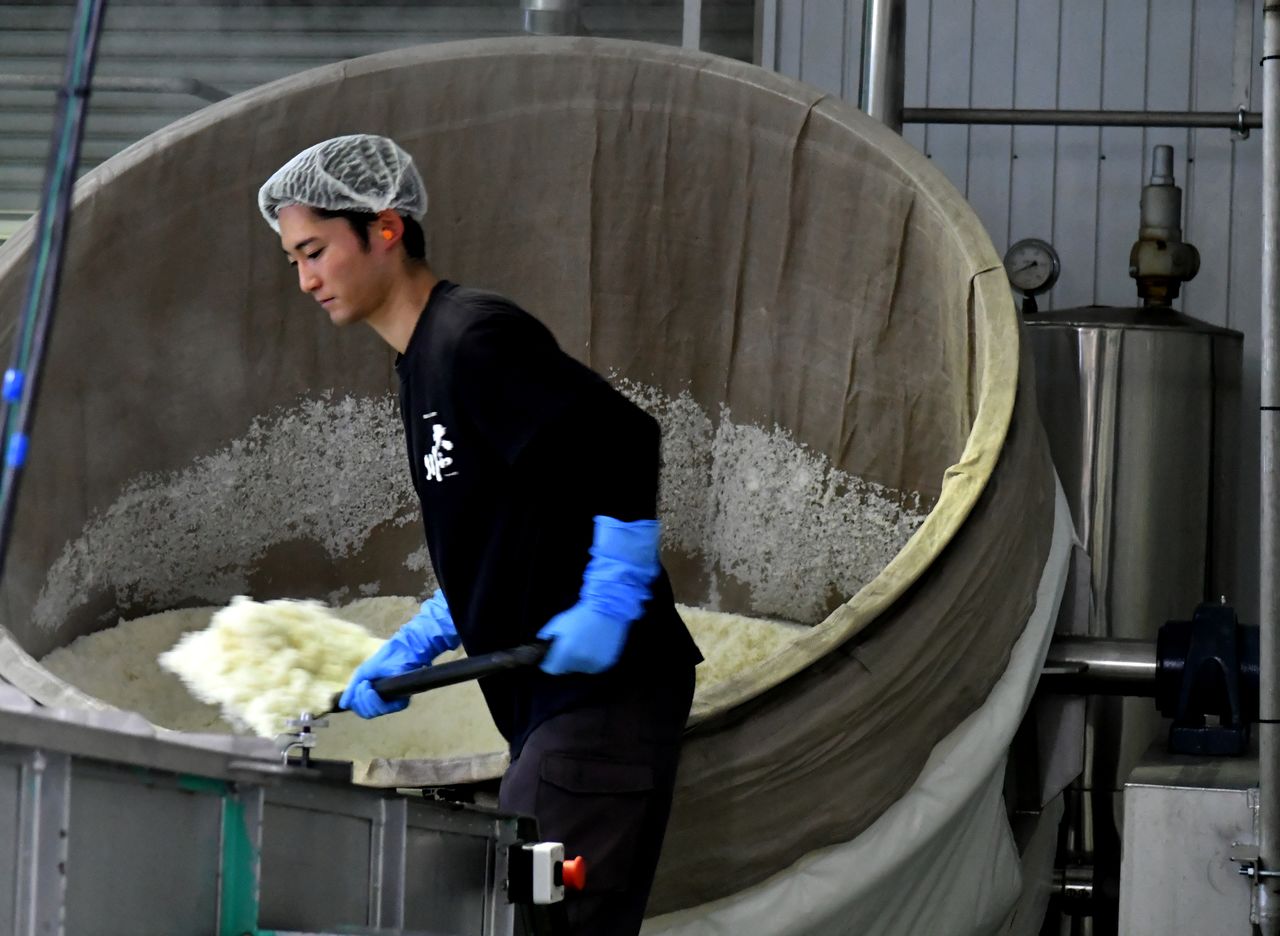 The twin backbones of Fukushima’s thriving sake industry are its pure water and bountiful rice. The once sterling image of the prefecture’s agriculture products has been irreparably tarnished, however, by the accident at Fukushima Daiichi Nuclear Power Station, with countries around the world blocking imports of products from the area—or even from Japan as a whole—over safety concerns. A decade since the triple disaster of the Great East Japan Earthquake, the tsunami, and the meltdowns at the nuclear plant, these fears continue to impact communities across the sprawling prefecture.

Growers in Aizu, for instance, are some 120 kilometers away from the Daiichi facility, placing them slightly closer to the crippled plant than Yamagata, the capital of neighboring Yamagata Prefecture, and a bit farther than the Tōhoku region’s most populous city of Sendai in Miyagi Prefecture. Nevertheless, they have had their products shunned and subjected to restrictions simply by merit of being within the boundaries of the prefecture. This has produced a palpable resentment among many farmers with regard to the lamentable decades-old decision by utility executives to include Fukushima in the plant’s name rather than just the host towns of Futaba and Ōkuma. 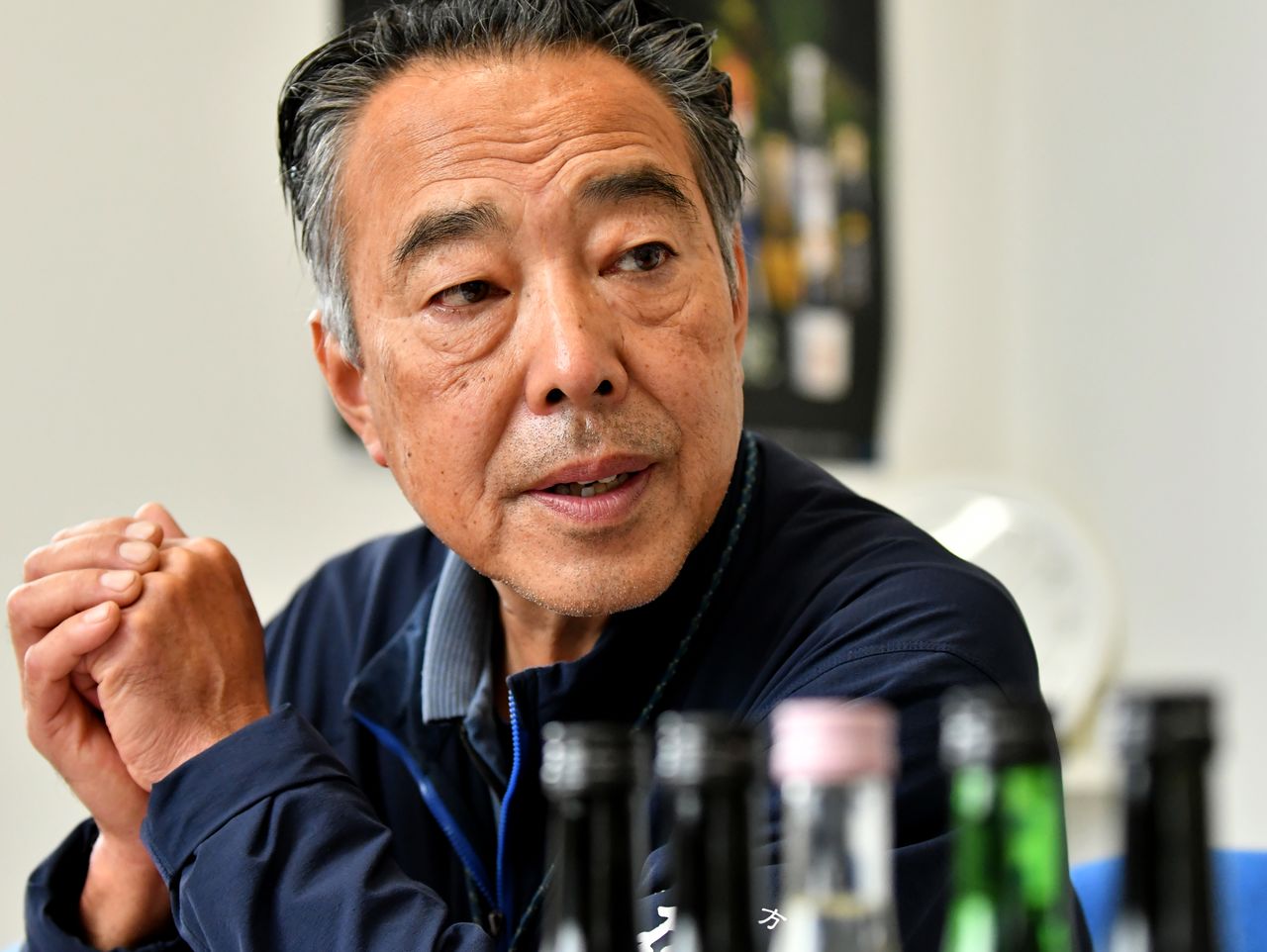 Satō Kazunori, who runs the 230-year-old Yamatogawa brewery, extols the region’s reputation for sake. “There are ten breweries here in Kitakata alone,” he exclaims proudly. “That’s remarkable for a city of just 40,000.” He tells how an early predecessor was lured from Kansai to Aizu by the area’s crystal clear waters, plentiful rice, and cool climate—the three essentials for brewing quality sake. The name Yamatogawa—Yamato River—pays homage to the brewery’s origins near the eponymous waterway that flows through the prefectures of Nara and Osaka. 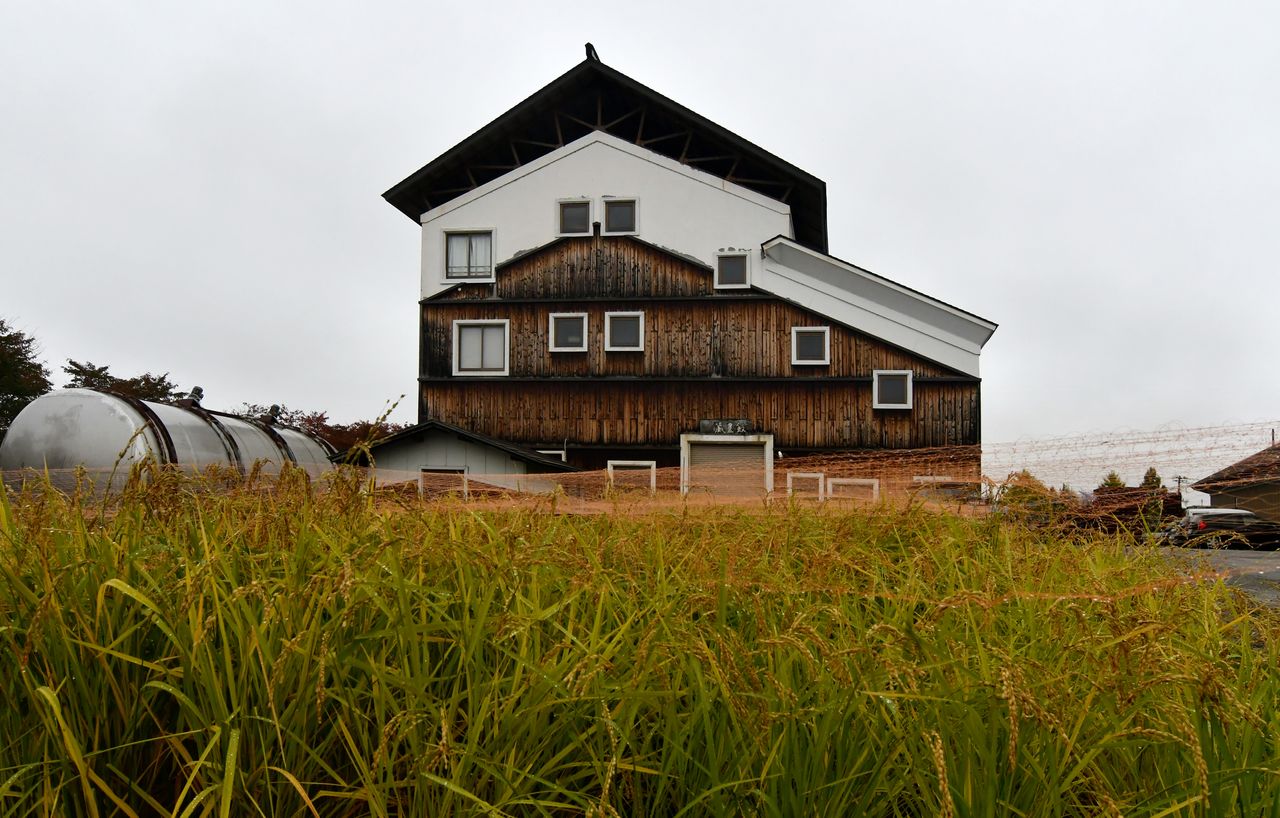 Yamatogawa produces its own sake-grade rice on land adjacent to the brewery.

The low mineral content of the region’s water gives Yamatogawa’s sake a smoothness and softness evocative of the “feminine” onnazake brewed in Kyoto and Fushimi. The brewery has repeatedly won honors at the National Research Institute of Brewing’s Annual Japan Sake Awards and was also among 10 members of the Japan Jizake Cooperative, an organization of regional sake makers, to launch products in Taiwan. Yamatogawa made an impact in the country with its flagship label Yauemon and also won fans with Rashiku, a variety brewed with Taiwanese drinkers in mind. Sales soared—I remember drinking Rashiku at a Japanese-style pub during a trip to the island—but then the Fukushima Daiichi accident happened. 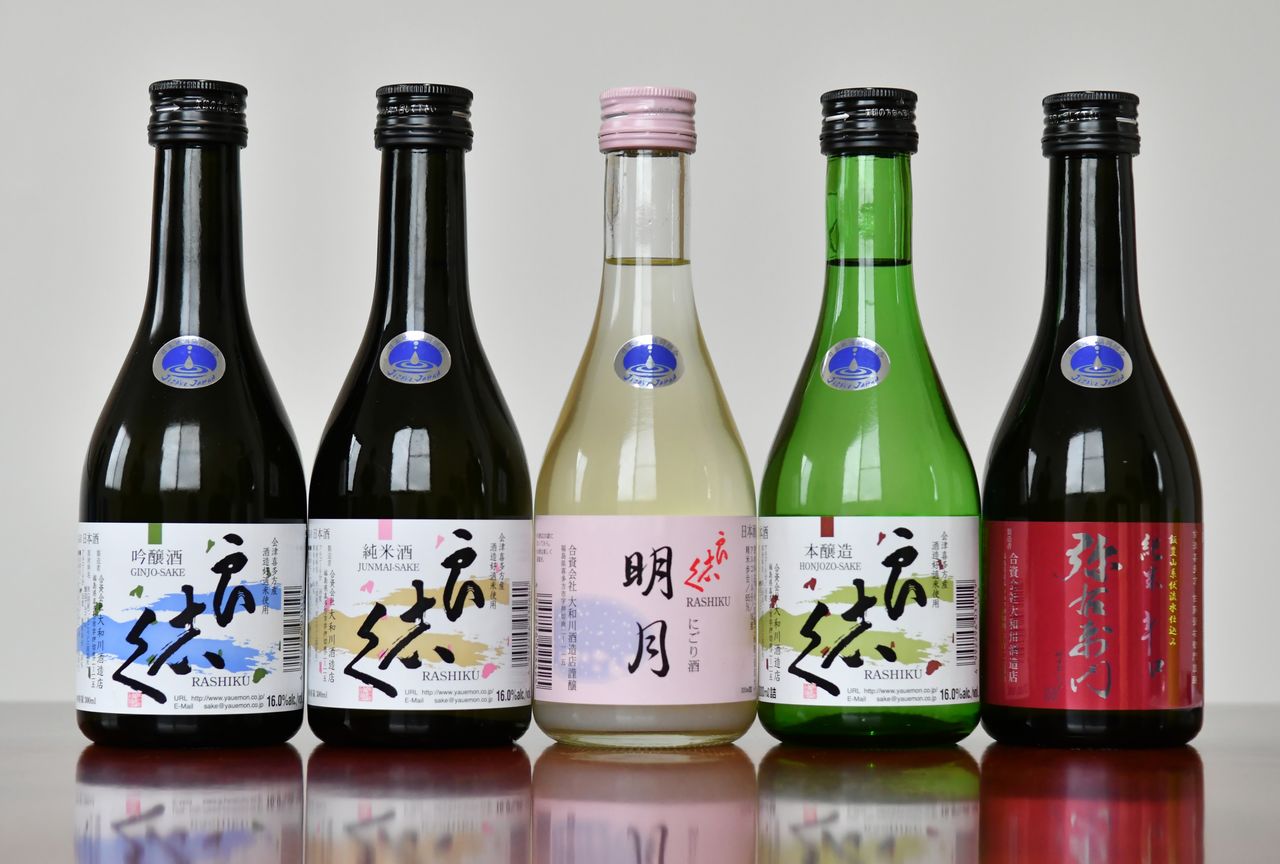 Yamatogawa sells an assortment of labels in Taiwan.

Satō says the brewery was unable to ship its products abroad for about a year after the disaster. The inability to sell sake in Taiwan was a particularly hard blow to the company’s bottom line as it was Yamatogawa’s most lucrative overseas market, accounting for 10% of its total sales. “We had a strong following in cities like Taipei and Kaohsiung,” he recounts. ”We were working on moving into regional centers when everything fell apart.”

The brewery weathered the storm and continued to produce quality sake, winning eight straight gold medals at the NRIB’s sake awards. It has since been held up as a model for other Fukushima producers. Satō says that sales in Taiwan have rebounded, but stresses that winning back customers was no easy task. “We traveled there time and again for events and steadily chipped away at the stigmas surrounding Fukushima,” he explains. “Sake still has room to grown globally, but the potential in Taiwan is especially good. Competition is stiff, but our prospects are bright.”

Not all of Fukushima’s food producers have been able to bounce back to the degree that sake brewers have. Lacking connections to overseas markets, the prefecture’s many fruit growers were hit especially hard.

At Abe Fruit, owner Abe Hidenori places an apple on a special lamp, transforming the ripe fruit into a glowing red orb. The simple device reveals the sugar content without the need to slice the fruit open. Abe does so anyway, offering me a piece that is as sweet and sticky as a sun-ripened pineapple. 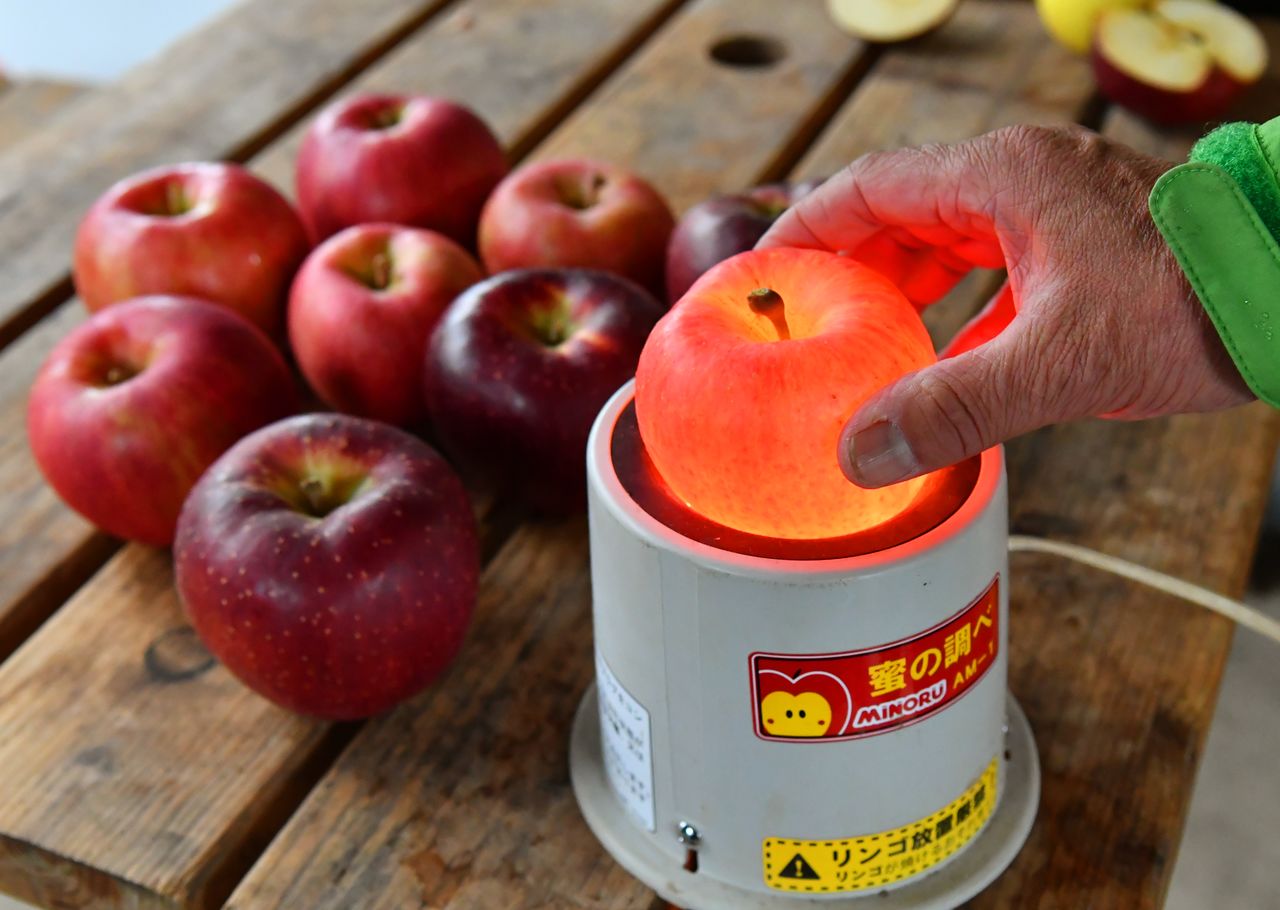 Abe checks the sweetness of his apples.

Known by the brand name Kōtoku, the variety is a consumer favorite. Abe says that when he took over the orchard from his father, there was just one lone Kōtoku tree on the whole property. By carefully grafting cuttings onto other trees, he gradually increased his stock until the sweet variety is now his main product. Foregoing traditional vending routes, he sells his apples directly online, with more than 90% of his customers being repeat buyers.

Abe stresses the demands of growing Kōtoku. The apples need special care to develop their characteristic sweetness, and knowing when they are ready to harvest requires a trained eye. Like most high-fructose strains, they are smaller than standard varieties, but bring double the price of Shinano Sweets, another type of high-end apple grown in the orchard.

Kōtoku have drawn the interest of consumers overseas. In 2019, Abe shipped 100 kilograms of the apples to Thailand, where they were quickly snapped up by department stores and wealthy buyers. Building on this success, he plans to export 350 kilograms this year. He acknowledges that moving into new foreign markets will not be easy. “The apples sell for a high price,” he admits, “but growing them is labor intensive. Like other fruit, they are susceptible to damage from disease and insects, and there is immense pressure on staff to meet the high quality standards.” 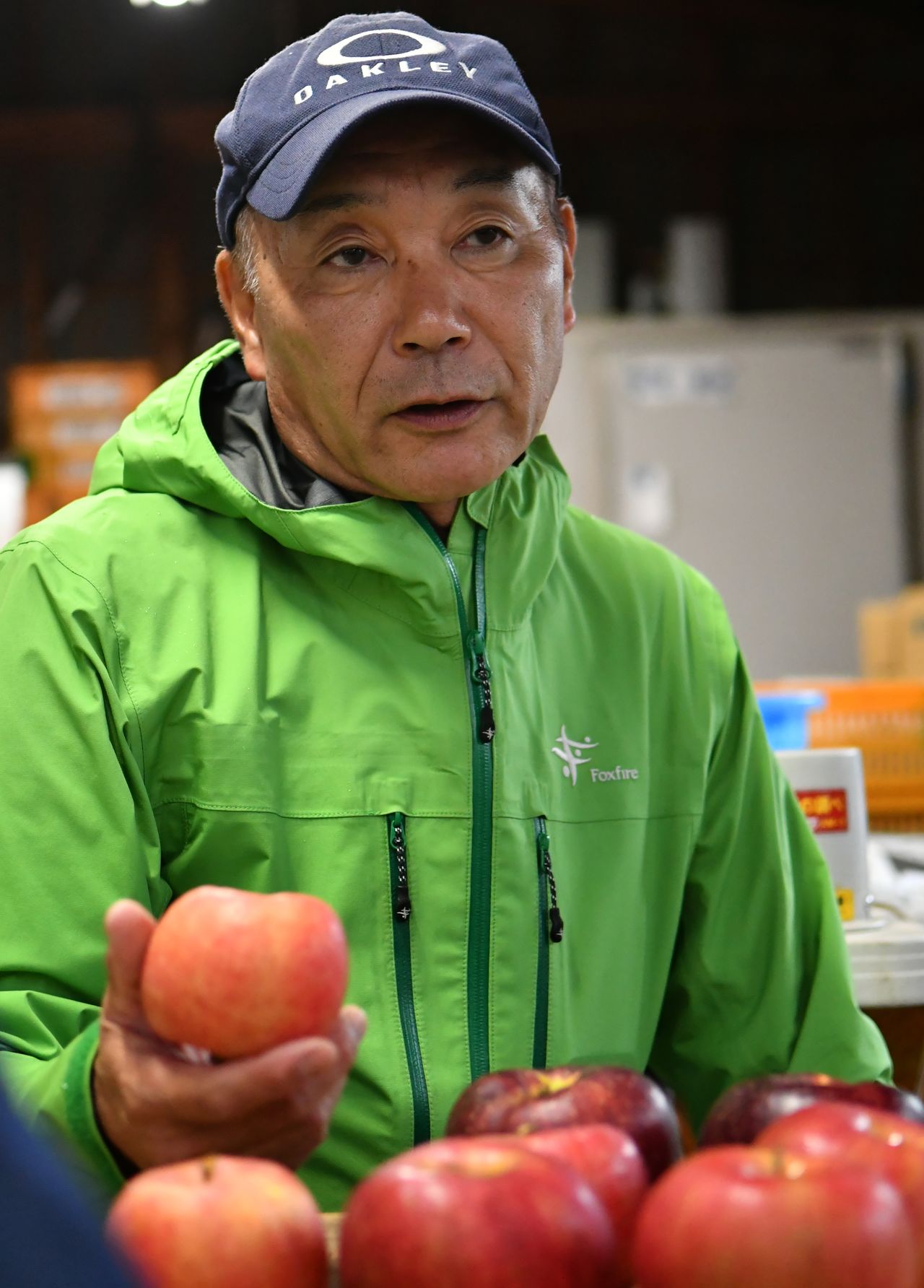 Abe holds one of his super-sweet Kōtoku apples.

Looking to lucrative markets like in Asia, Abe had his orchard accredited under the Japanese certification program Asia Good Agriculture Practice in anticipation that countries like South Korea and Taiwan will soon lift export bans on fruit from Fukushima. He hopes that success in demanding foreign markets will also boost the brand identity of his products at home. However, he knows that negative perceptions remain deeply entrenched overseas, where just mentioning the name Fukushima can drive buyers away. “It conjures up images of workers in hazmat suits,” he admits. However, he says: “The first three years after the accident were a bust, but the situation has gradually improved.”

Growers and distributors in Fukushima have dealt with lingering stigmas for a decade. There is no telling when customers in Asia and elsewhere will regain full confidence in products from the prefecture. However, Abe and others are determined to overcome prejudices by doing what they have done all along, promoting their goods with pride and confidence.

The return of Taiwan as an export destination is of particular importance to Fukushima’s farms and fisheries. Fruit growers have been particularly impacted, most notably producers of the prefecture’s celebrated peaches, who prior to 3/11 exported 70 tons to the country annually. Producers look at the high consumer confidence agricultural products from Japan enjoy in Taiwan and the numerous Japanese restaurants in the country as a sign of hope that there is a market for their offerings once restrictions are lifted, a prospect they eagerly await.

Katō Farm in the city of Fukushima is an example of a grower taking new approaches to invigorating interest in local products. Owners Katō Kōji and wife Emi recently opened Yellow Beer Works in a suburb of the prefectural capital, where they dispense craft brews like Zasō Ale, a fruity, American-style beer made with hops and other ingredients grown in the town of Minamisōma near the Fukushima Daiichi power station. 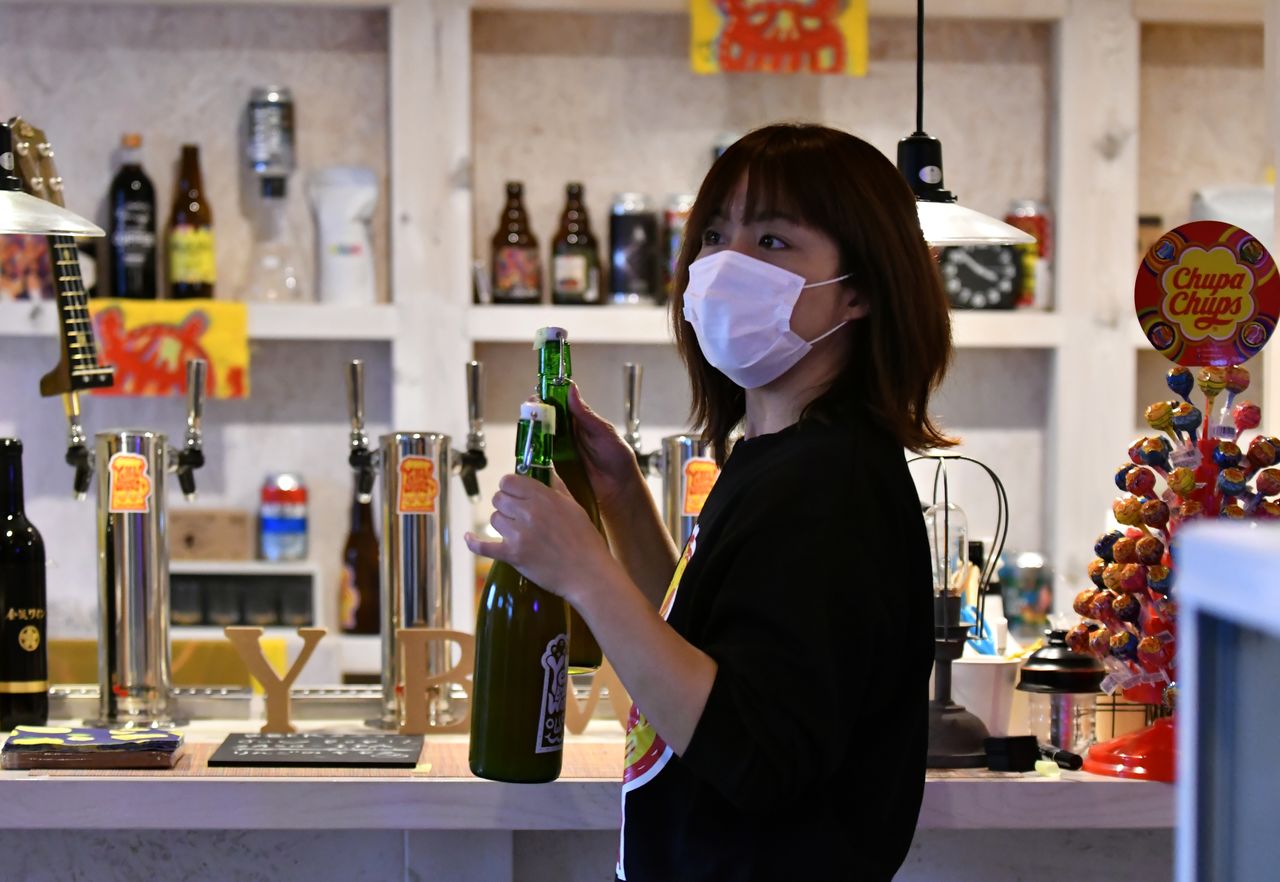 Fukushima has relatively few craft beer makers and the Katōs, who farm rice in Minamisōma, saw potential in getting into of the business. Since opening their shop in the district of Ōzasō, their menu of brews have attracted beer lovers from far and wide, many of whom arrive early to enjoy the offerings freshly poured or bottled. Although the Katōs admit that they have to source a portion of their ingredients from outside Minamisōma, they insist the flavor is absolutely local. “Mixing yeast and hops yields limitless variations,” pronounces Emi. ”Each batch is subtly different, making every visit to the pub a new experience.” 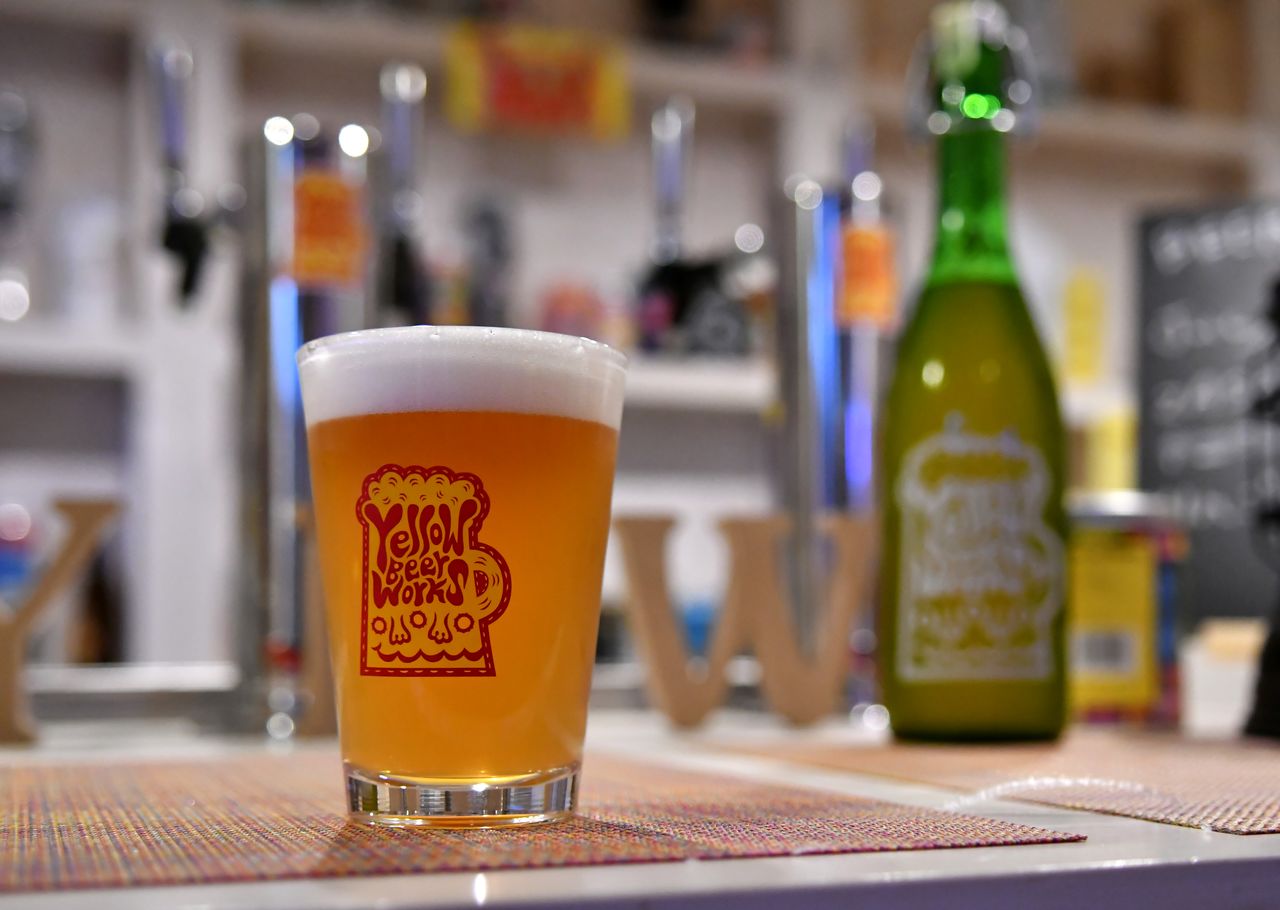 Haziness is a characteristic shared by many of the beers on tap.

In 2009, the Katōs quit their city jobs, packed up their belongings, and moved with their four children to the country to become farmers. Two years later, though, the nuclear disaster forced them to develop a whole new approach to agriculture, one that considers concerns like the aging of the farming population and negative perceptions of Fukushima products.

In spite of the many challenges they face, the couple takes things in stride. “All of our rice gets screened so we can offer it to customers with full confidence that it is safe,” explains Kōji. “Even so, I have to accept that not everyone will want to buy it.” He says he does not take the Taiwanese ban as a criticism of the quality of products from Fukushima, but the result of an overly cautious policy. “I expect this won’t change for another ten or twenty years. In the meantime, we’ll continue working to win the confidence of customers. When overseas visitors return to Fukushima, I’ll be here with a freshly poured beer waiting for them.”

Although Japanese consumers are no longer as hesitant to buy products from Fukushima as they once were, there are still lingering effects. Prior to the disaster, the price of high-grade Fukushima beef was only marginally lower than better-known varieties of wagyū from other regions. Today, it is priced around ¥200 per kilogram less, illustrating how Fukushima as a brand name continues to struggle. The same trend can be seen with rice and other staples, with products grown in the prefecture typically fetching lower prices.

The efforts of growers like Abe and the Katōs are reversing negative perceptions of Fukushima. Winning the full confidence of consumers will require more time, especially with regard to countries like Taiwan removing import bans. I urge buyers at home and overseas to look past the name Fukushima and to recognize the dedication and unflagging work of producers to rebuild trust over the last decade.