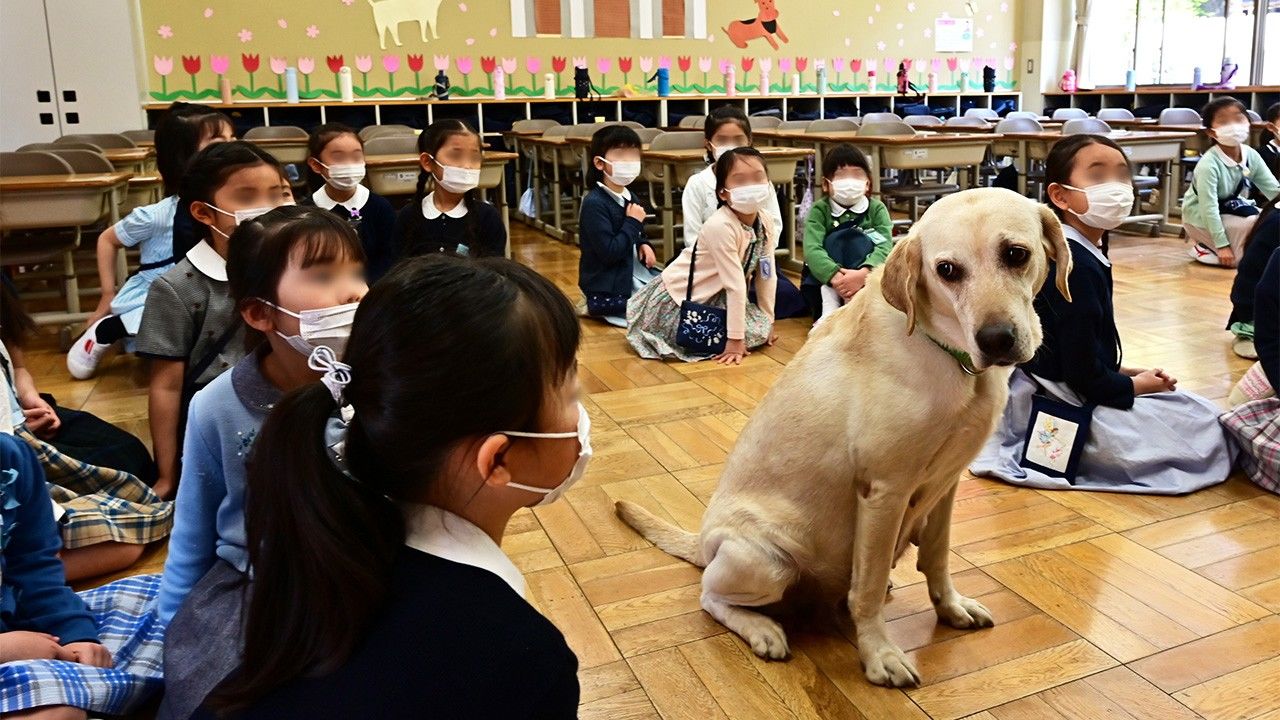 Puppy in the Classroom: Lessons in Life with School Dog Crea

Guide to Japan Society Jul 2, 2021
Part two of the animals at work series introduces Crea, a Labrador retriever at Saint Margaret’s Elementary School in Suginami, Tokyo. She is part of an animal-mediated education approach to nurture the emotions of the children. We visited the school to find out how students and canine interact.

At Saint Margaret’s Elementary School in Tokyo, children erupt in excitement when first-grade teacher Yoshida Tarō brings the dog into the classroom. “She’s so cute,” one student squeals. “Quiet down now,” Yoshida warns, telling his charges that dogs, like humans, get nervous when meeting new people and that too much noise makes matters worse.

Yoshida leads the dog, a Labrador retriever named Crea, around the classroom. Seemingly content with her survey of the surroundings, Crea unceremoniously plops down on the floor amid the gawking children. 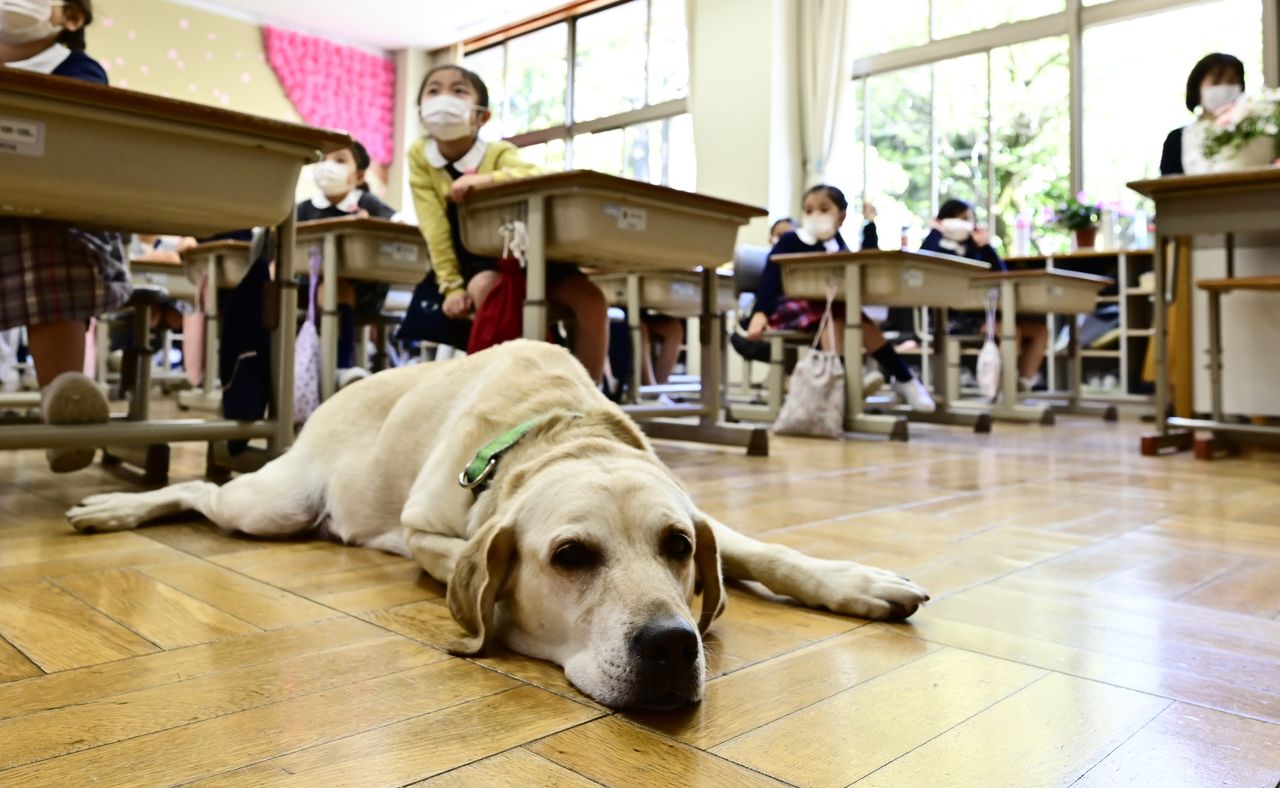 Crea on duty. The Labrador retriever has been at the school since October 2016.

Crea came to the school from Eye Mate, a foundation which provides guide dogs to blind and visually impaired people. But at Saint Margaret’s, she is part of a “school dog” program that has been running since 2003.

The genesis of the project was a candid observation by a girl that “school would be fun if there was a dog here.” The student was having a hard time settling into the classroom routine and it seemed a reasonable remedy.

The comment inspired Yoshida to look into adding animal-mediated education to the curriculum as a way to nurture students’ emotions.

“It took a while to determine the ideal dog for the school,” Yoshida recounts.” At first, we thought that a small breed that didn’t shed, such as a toy poodle, would be best. But then it occurred to us that a larger dog would be better suited for rambunctious school kids. We eventually decided on an Airedale, which is the biggest type of terrier.” 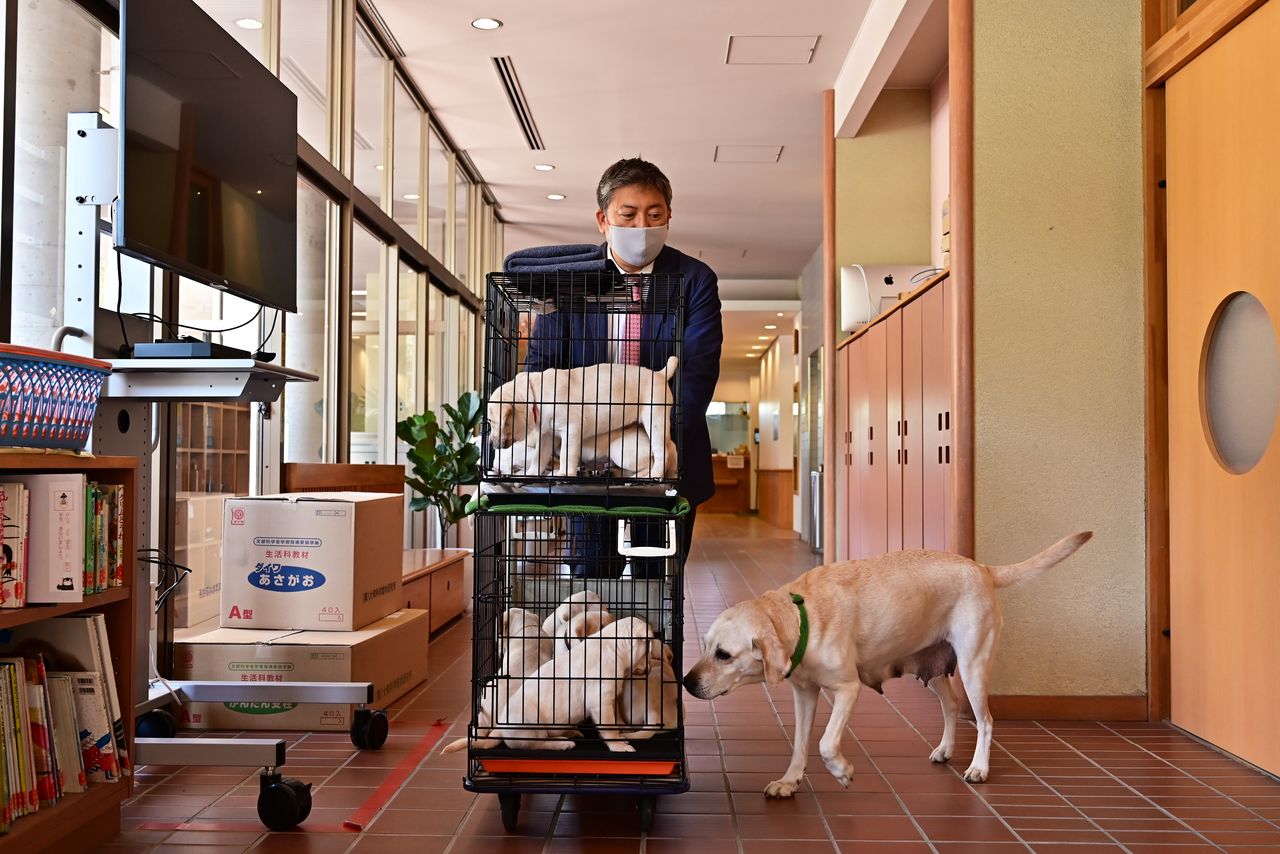 Crea keeps close watch as Yoshida wheels her month-old puppies to a classroom.

Sad Farewells and a New Life

The first school dog, named Buddy, spent all her days with the students at Saint Margaret’s and even introduced the children to the cycle of life by giving birth to two litters of puppies.

“Buddy passed on at the age of 12,” says Yoshida. “She was followed by her daughter, Link, and Will, who came to us from a shelter in Fukushima after the Great East Japan Earthquake. The fact that we said our farewells to the dogs in our chapel made a deep impression on all of the children.”

Crea is joined at the school by Buddy’s niece, Verona, as well as her fourth litter of puppies, born this past spring. 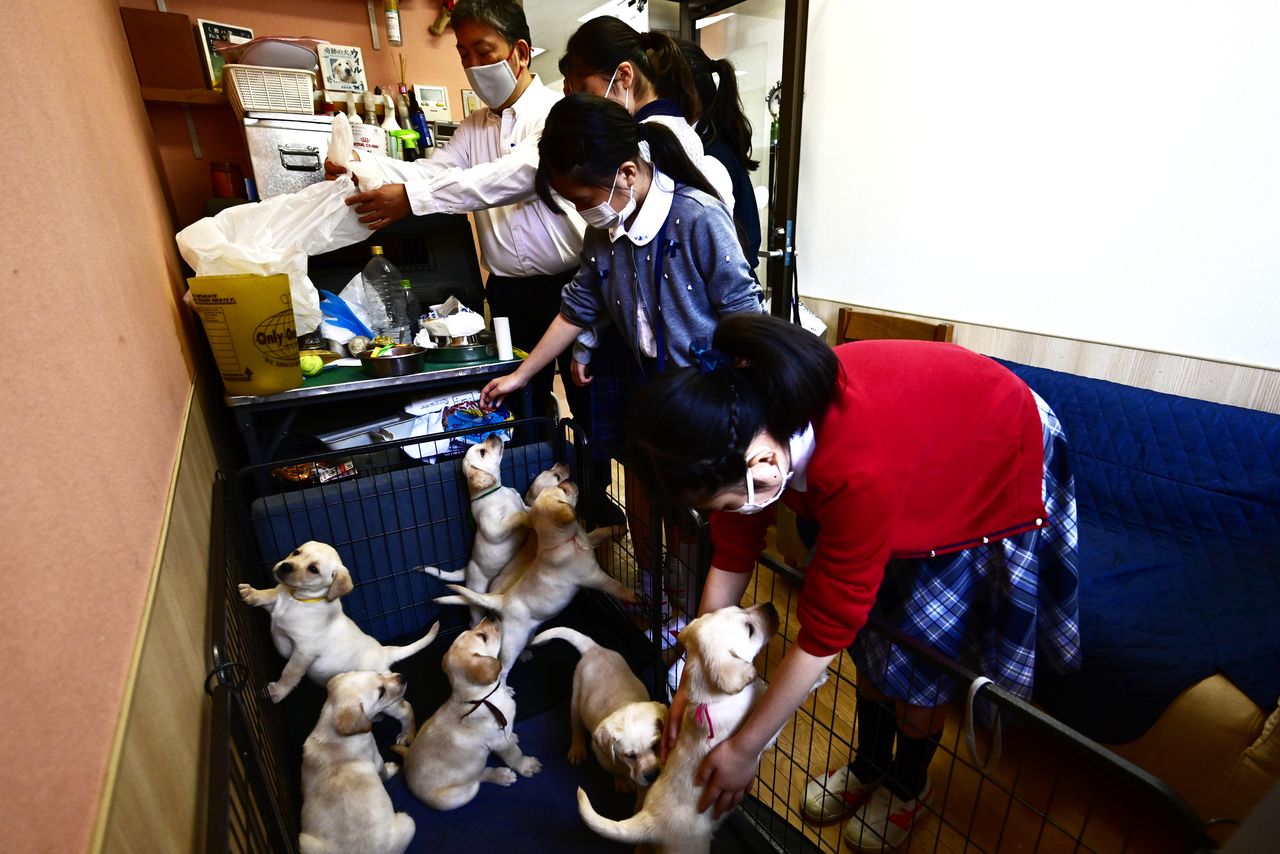 During breaks, sixth year students appointed as “buddy walkers” look after the puppies.

Yoshida says that since Buddy’s time at the school, the students have been able to enjoy the experience of helping raise puppies at least once during their six years at Saint Margaret’s. “Witnessing the miracle of birth fills the school and kids with joy.”

Following a new litter being born, the students first get to see the puppies when they are three days old and then watch as they grow day by day.

“When they see the mother dog licking the puppies after they pee and poop, the kids always say it’s gross,” Yoshida explains. “But when we remind them that their own parents wiped their bottoms and changed their diapers as babies, they always look a little sheepish, as if they know it’s true, but don’t want to acknowledge it. What’s interesting is that the reaction is the same no matter the grade of the students.”

On the day we visited the school, there was a special surprise awaiting the first graders, who were still new to the school dog program. The students were given a chance to pet and hold Crea’s puppies, nine in all. 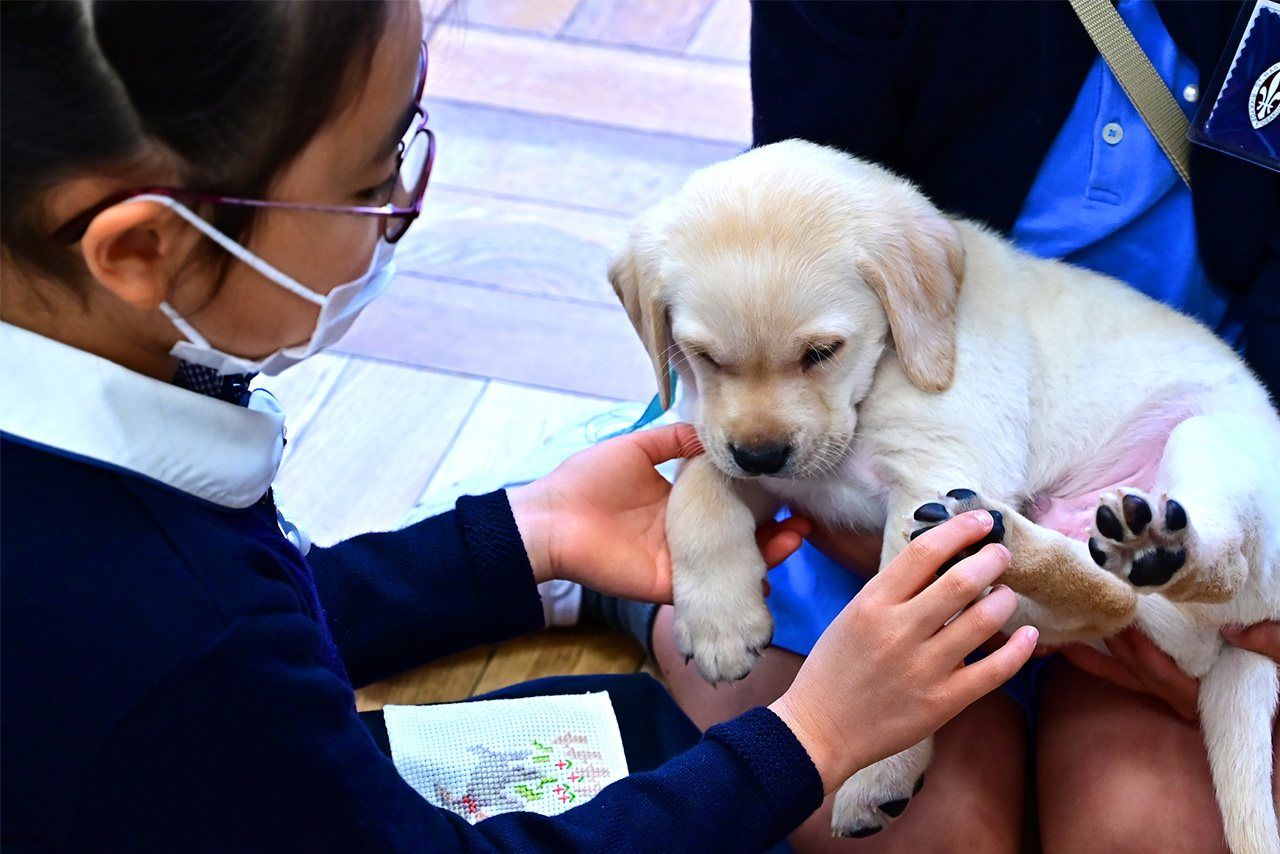 A student getting to know one of Crea’s puppies. 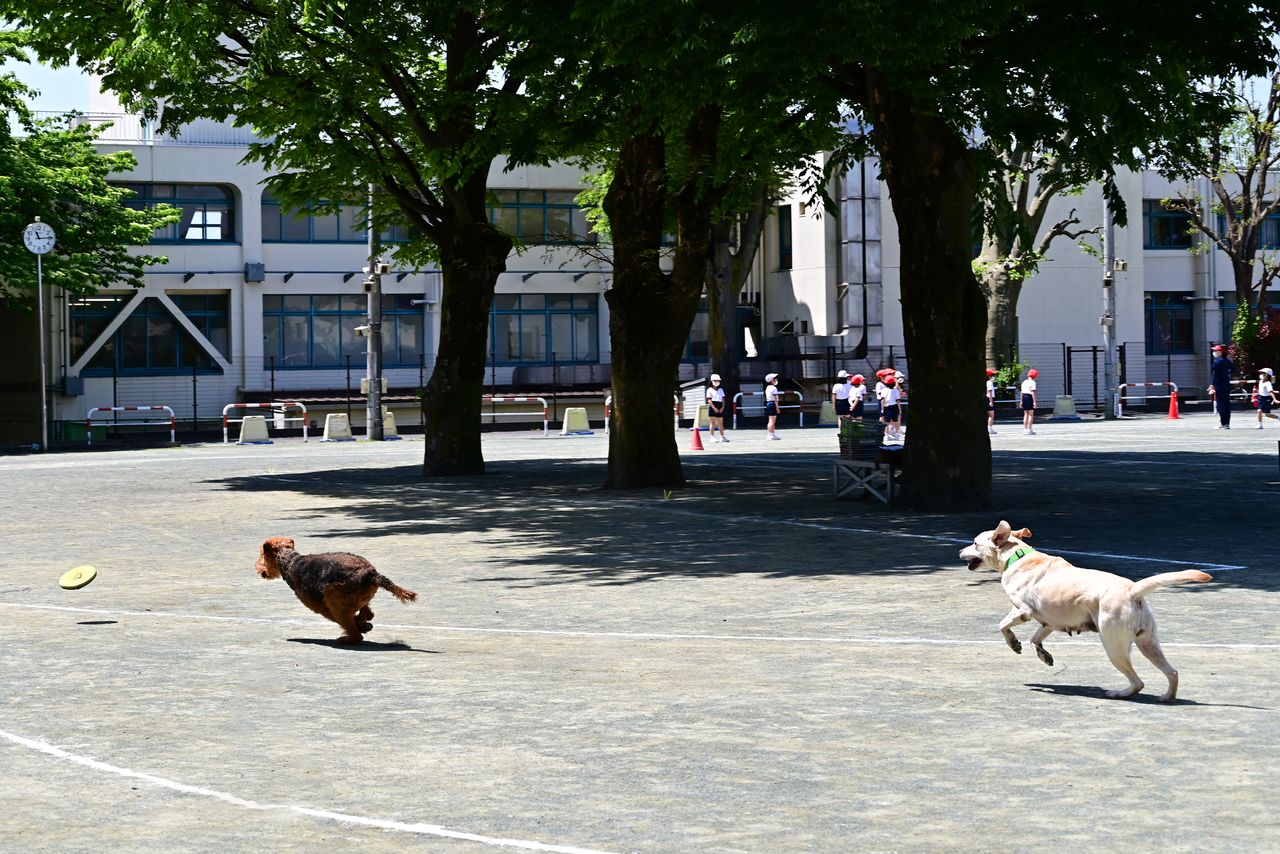 Crea chases after Verona in the schoolyard.

Crea appears a little nervous as she paces around the children who are holding her puppies, seemingly unsure about what is going on. But she never barks and never gets upset. As a school dog, she trusts the children as they welcome her offspring into their community.

Main job: Going to school and taking part in classes and events, as well as playing with student during breaks.