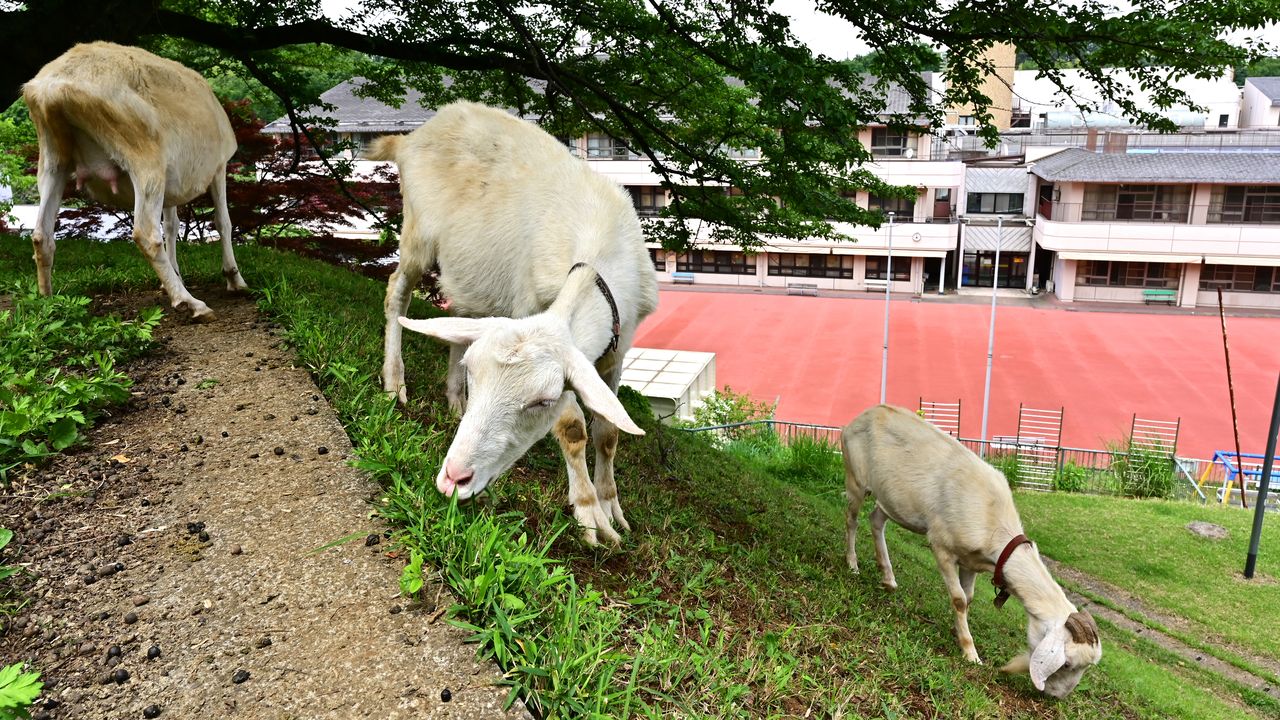 Society Aug 4, 2021
In part three of our animals at work series, we visit Shimada Ryōiku Center, an assisted living facility for disabled children in eastern Tokyo. On staff are a team of goats who, along with keeping the grounds well groomed, charm residents and visitors alike.

The steep, terraced slopes behind the Shimada Ryōiku Center shimmer in the sun. “Until a few years ago the area was an overgrown mess,” says Morikubo Mayumi, who oversees the administration department of the care facility in Tama, Tokyo. “Thanks to our goat landscaping crew, though, it now looks impeccable all the time.” 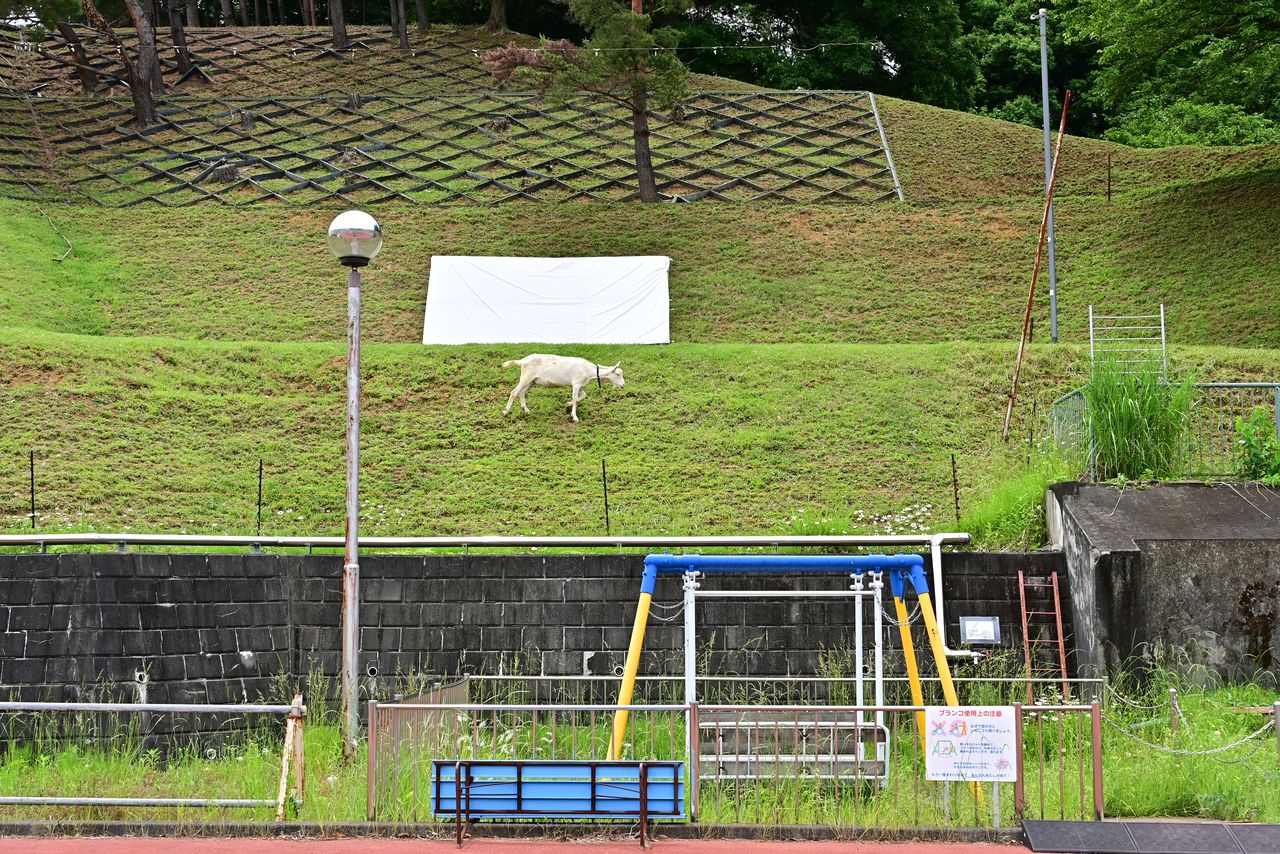 One of the goats at the Shimada Ryōiku Center nibbles grass. The facility uses the animals to keep weeds and grass on the grounds under control.

The goats, three in all, appear as little white dots on the verdant slopes. Casually nibbling away at the greenery, they keep the some 6,000 square meters of land behind the facility in a pristine state.

The center opened in 1961 as the first care facility in Japan devoted to children with severe physical and intellectual disabilities. Today, it also cares for young individuals who are developmentally disabled.

Morikubo says that she came up with the idea of using goats on the grounds after seeing several of the animals trimming the grass of a parking lot near the station. “I thought it was a great way to weed,” she exclaims. “When I ran across the telephone number for the service on a billboard, I called right away.”

Ikezaki Makoto of Alpha Green answered the call. He heads a company that specializes in providing ground cover on embankments and other sloped areas. About 15 years ago the company also began renting goats to customers. “It’s challenging to cut grass on steep inclines,” Ikezaki says. “Unless you happen to be a goat.” 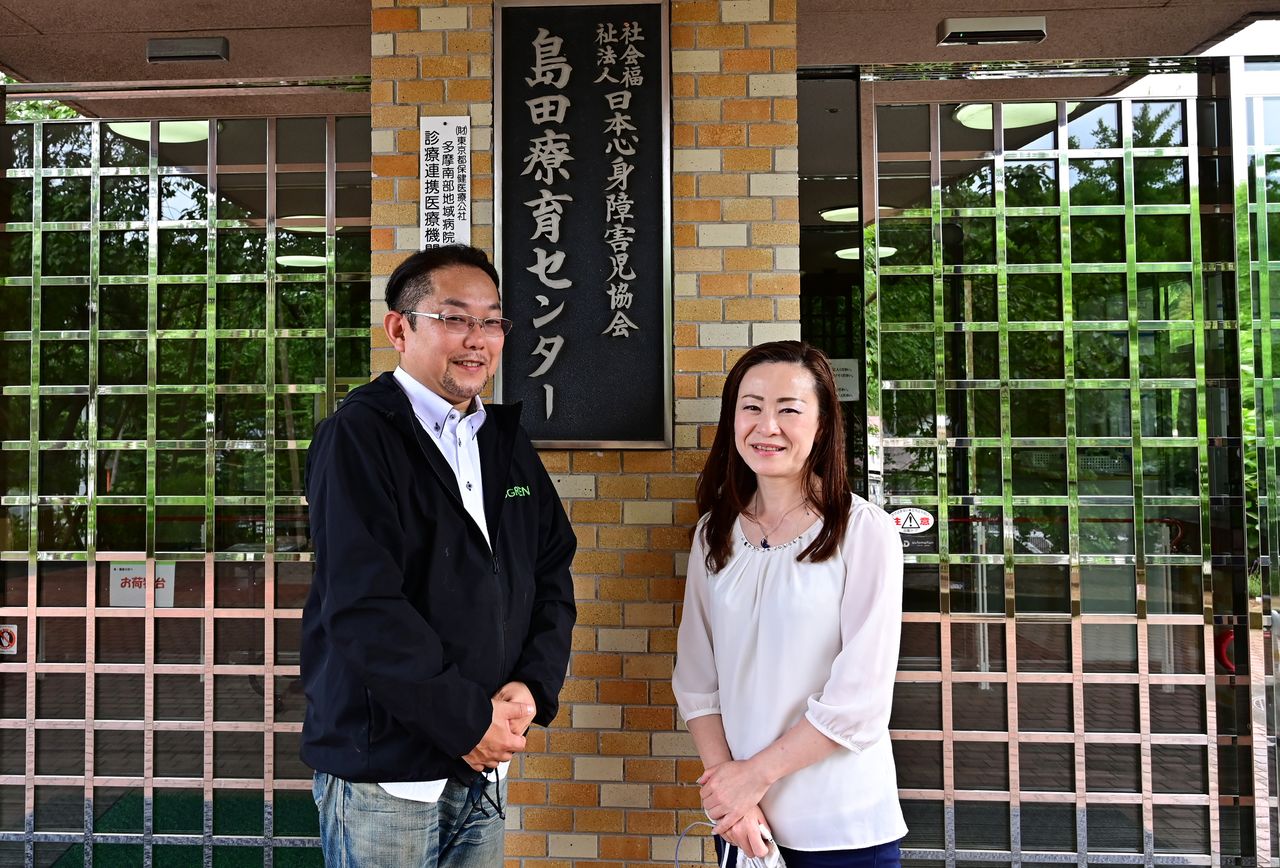 According to Ikezaki, the grazing instinct of goats gives the creatures a distinct advantage over people when it comes to brush control. A person armed with a weed trimmer can clear an overgrown area in a couple of hours, but will need to repeat the process every few weeks when everything grows back. The perpetual nibbling of goats, on the other hand, keeps the ground cover more or less even and looking good all the time. The animals, with their natural climbing abilities, can also easily scale steep slopes such as those at the center, daunting and dangerous terrain for a human.

Furthermore, as the goats’ digestive tracks take care of the clippings, there is no waste to dispose of. Ikezaki points out that the resulting droppings fertilize the soil and, being composed of chewed plants, are mostly odorless. He insists that “goatscaping” is also environmentally friendly. Methane, a potent greenhouse gas, emitted by livestock has become a serious concern in recent years, but with only a small number of goats in Japan used for clearing land, the gas produced from the practice is negligible.

After visiting the facility to do an assessment, Ikezaki got to work. “We came to an agreement right away,” he says. “With so many tasty plants to be had, it was a perfect place for our goats.” 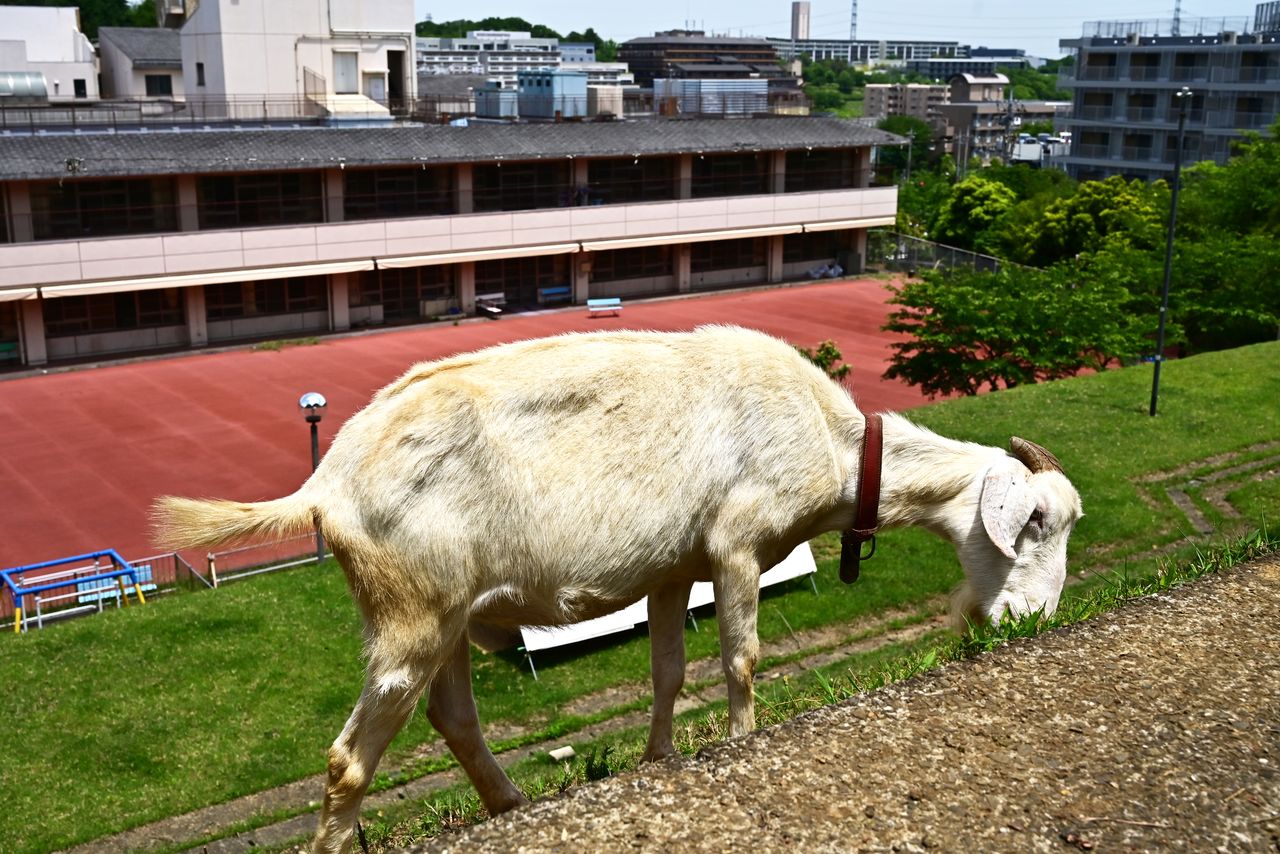 Isoko, the leader of the group, hard at work.

Alpha Green dispatched three goats to the center: Isoko, Kasumi, and Yū. The troupe wasted no time in tackling the unruly brush. Goats consume around 10% of their body weight each day, which for the trio amounts to some 15 kilograms of foliage combined.

Morikubo praises the goats for getting the brush under control in what she says was “no time at all.” She also commends the three animals for the soothing effect they have had at the facility. “They’re our little superstars.”

She notes that an animal therapy program has sprung up around the goats. “It has become a custom of residents to check on the trio,” she says. “People walk around the grounds or watch from their windows to see what they are up to. When the weather is nice, staff doctors like to take outpatients to the bench in the courtyard, combining consultations with goat watching.” 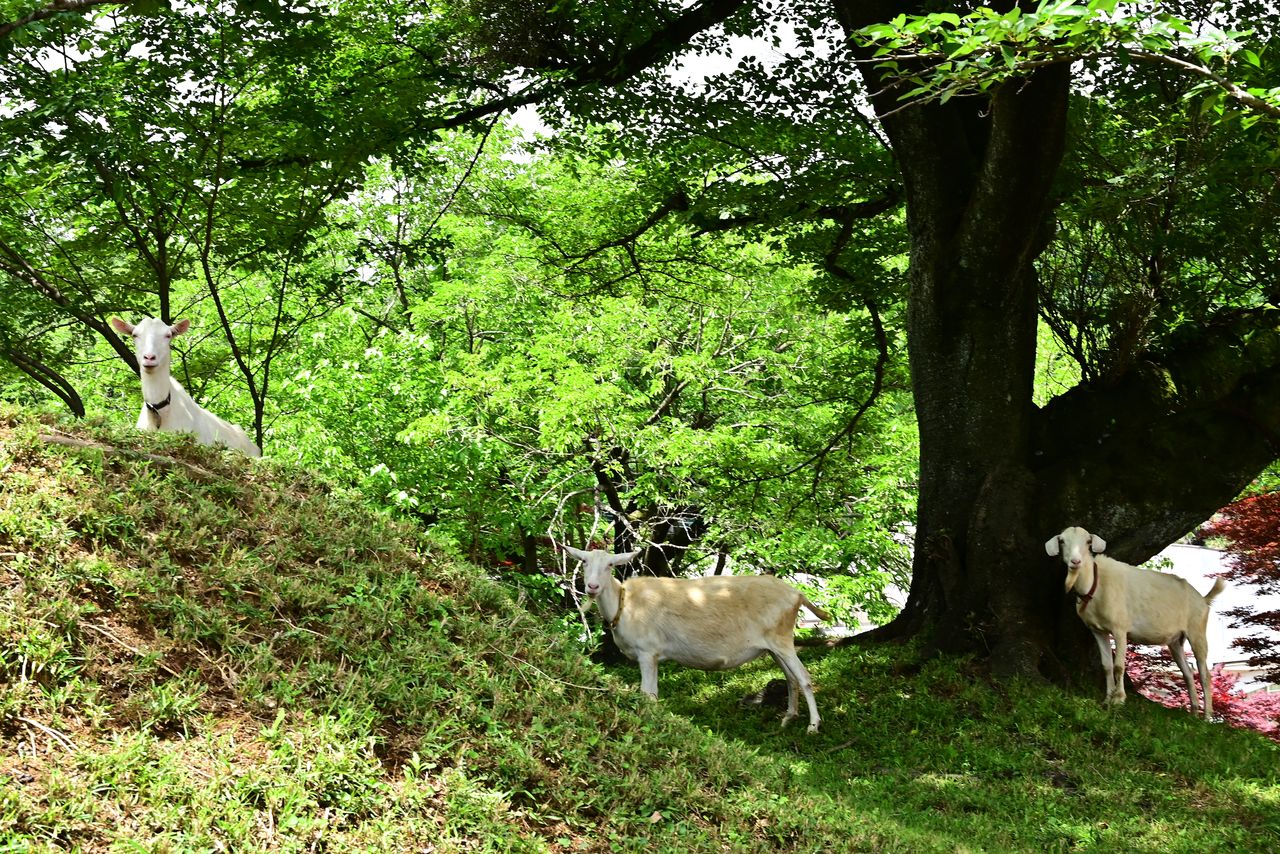 The team takes a break in the shade.

Isoko acts as the leader of the group, keeping fellow female Kasumi and male Yū in line. The animals spend from April to October grazing the grounds and then return to their home ranch during the cooler months. “It was a sad time when they went home that first autumn,” recounts Morikubo. “Residents would scan the hillside longingly looking for Isoko and the others, and some people even broke down in tears upon learning the goats were gone for the season.”

The goats are now in their fourth year of service at the center. Alpha Green allows customers to select specific animals from its stock, and every spring the trio returns by popular demand. As this article goes to print, they can be found happily nibbling the grass and weeds at the facility while basking in the adoring gaze of their human admirers. 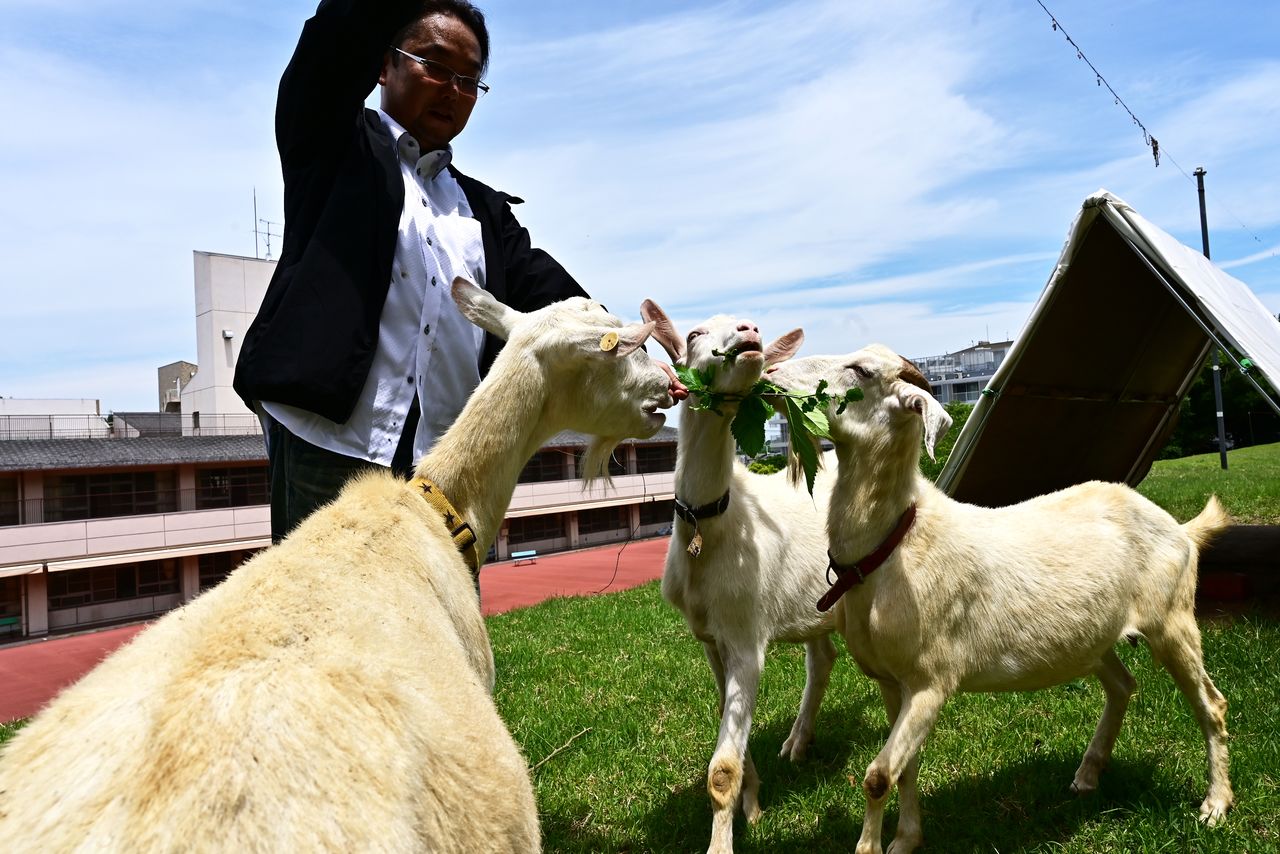 Ikezaki feeds the goats leaves of the kudzu vine, one of their favorite foods. In the background is a goat-sized rain shelter, the animals being averse to wet weather.

(Originally published in Japanese. Banner photo: The Shimada Ryōiku Center’s trio of goats grazes the hillside at the facility. All photos by Yamaguchi Noriko.)