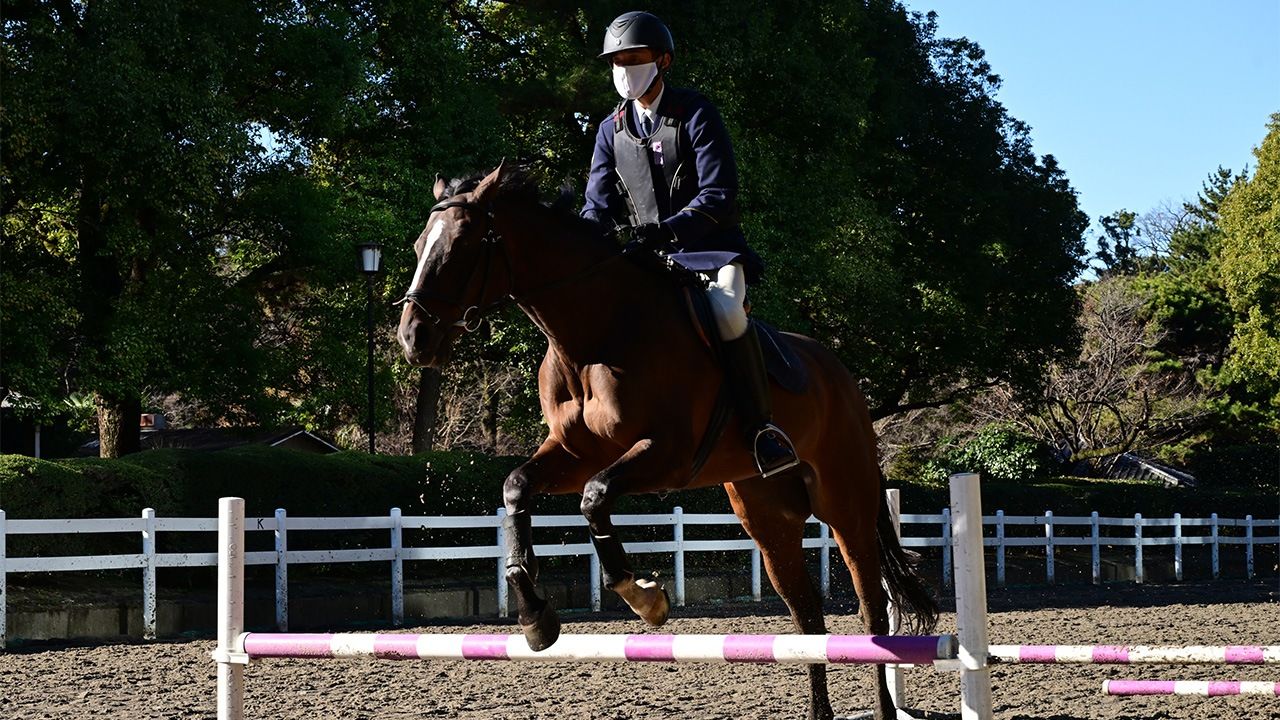 From Racetrack to Carriage Escort: Shōyū, the Imperial Guard Horse

Society Mar 17, 2022
This series introduces various animals who, with their soothing presence, make the lives of people richer. The fifth episode features Shōyū, a horse who works as an escort with the imperial guard. We visited the horses that live and train in the pleasant setting of the imperial stables.

“The horses that live here are all former racehorses,” states Satō Mitsuru, the official in charge of the escort horses for the imperial guard. “You could call it something of a career change for them after racing hard for a living.”

He is referring to the 14 thoroughbreds that specialize in patrols and other duties for the imperial household and are stabled in the Imperial Palace grounds. 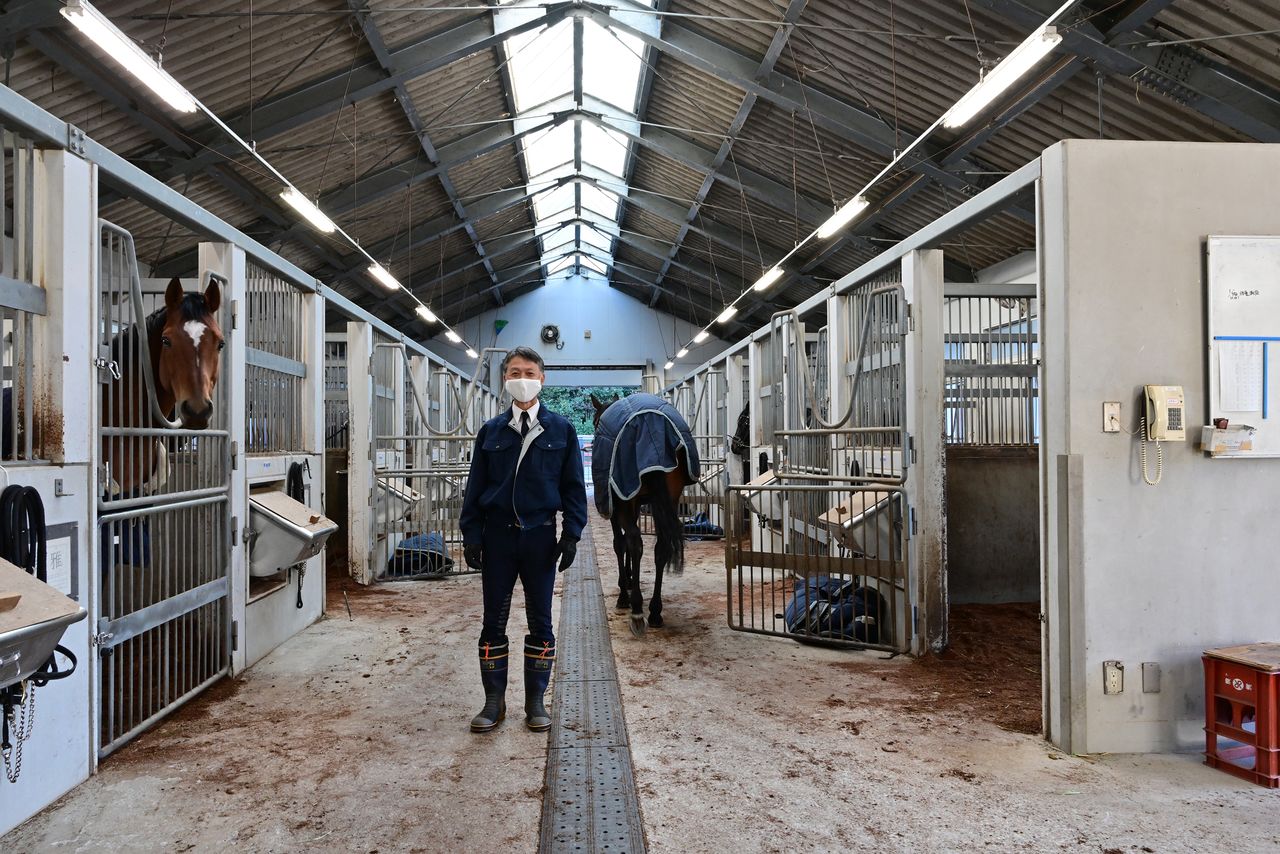 Satō Mitsuru is in charge of the horses’ well-being and manages every aspect of the stables.

Their main job consists of escorting the carriages carrying newly appointed ambassadors. In a long-held tradition, the diplomats travel from Tokyo Station to the Imperial Palace to meet the emperor. 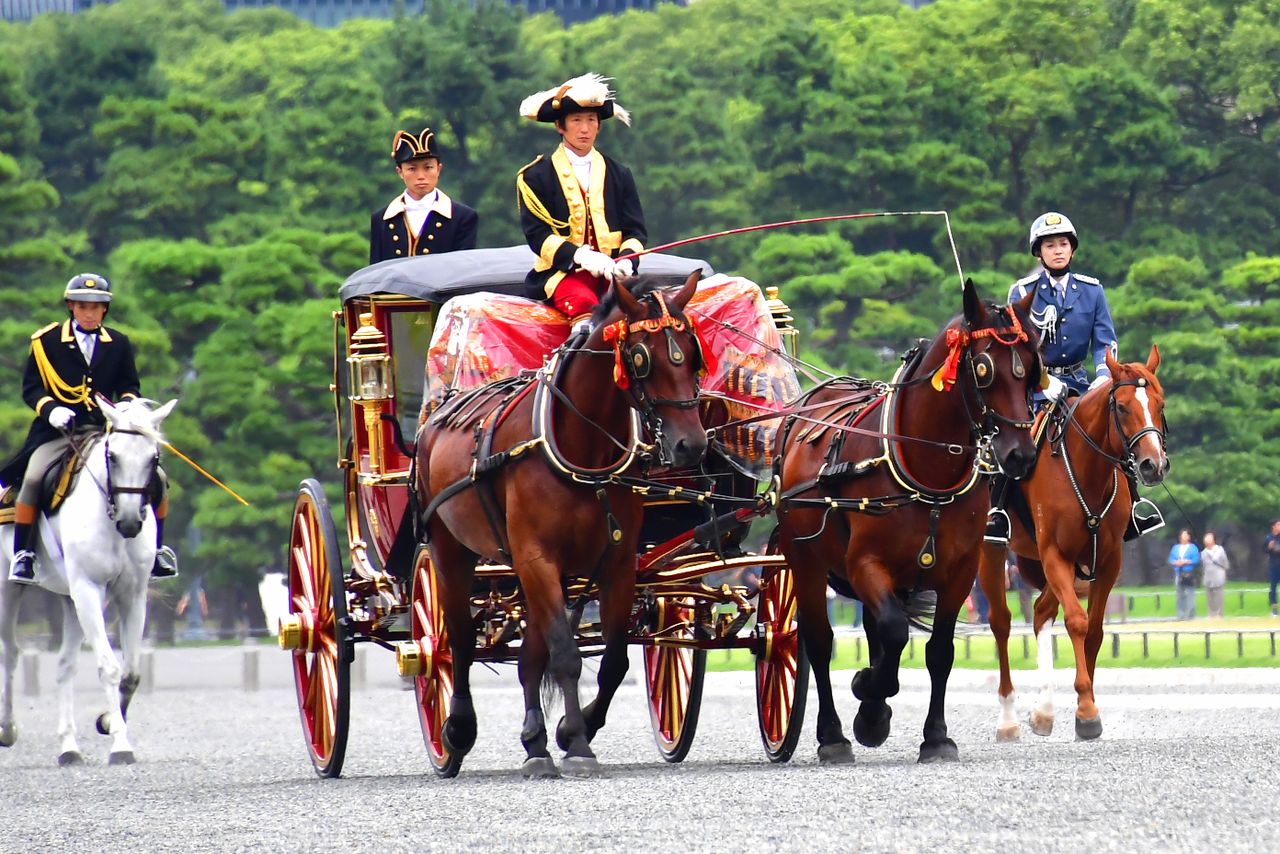 Shōyū is one such horse. Now 16 years old, he joined the imperial guard after retiring from racing at the age of four.

Satō says he was taken with Shōyū the first time he saw him. “He had just arrived at a riding club an acquaintance of mine owned. When I rode him, I knew immediately that he was the horse for the job.” 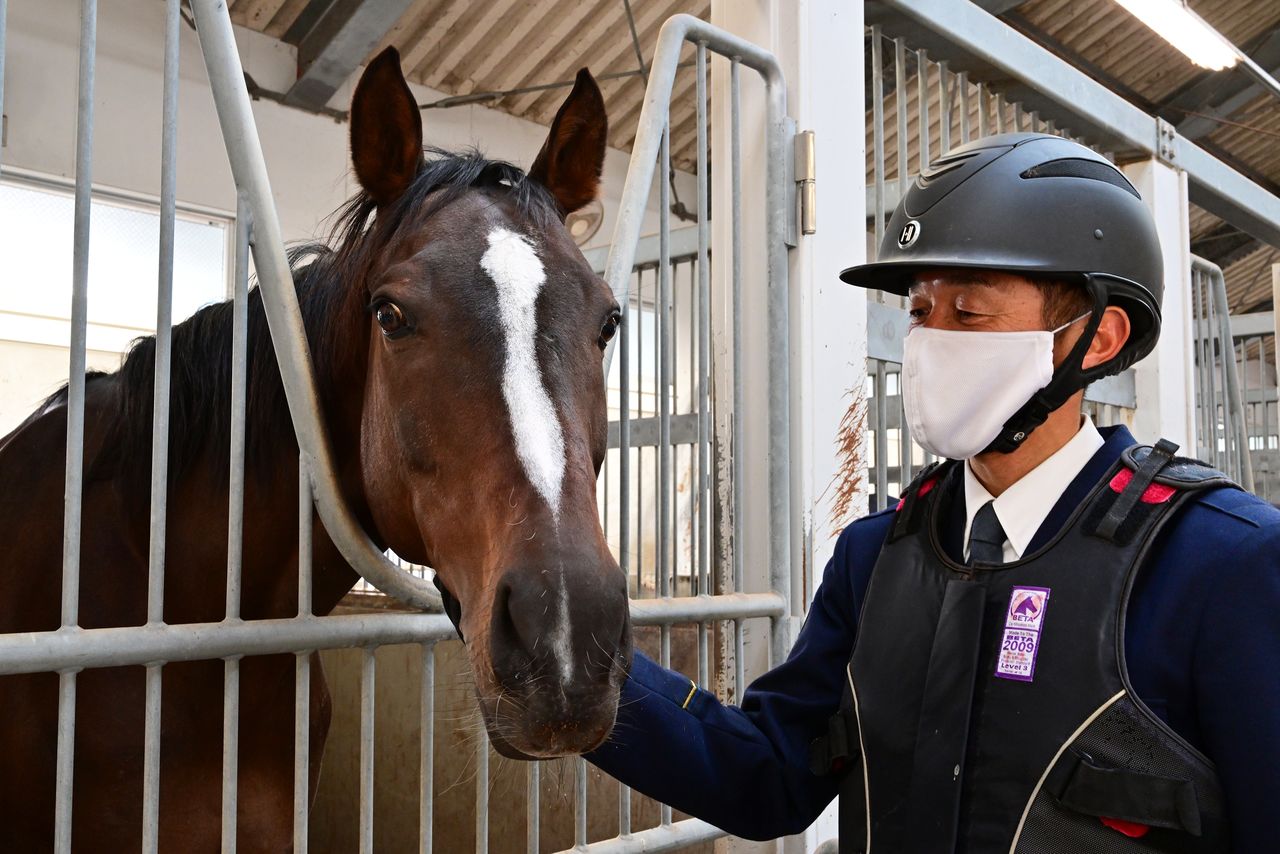 Shōyū back at the stables after a training session. He is ridden by a different guard every day, who then showers and brushes him, and care for his hooves.

Satō started riding when he was in junior high school and went on to become a professional rider, taking part in several national-level equestrian competitions. He came to his current job through the recommendation of his riding mentor. Now a 35-year veteran, he has trained numerous horses and instructed as many riders.

Satō says there are certain factors that make a horse suitable to become an escort horse. “The horse has to have a calm, even temperament and be reliable,” he explains. “It mustn’t spook easily. Shōyū is the perfect example of this kind of horse.”

When asked whether the horse also had to be good-looking in order to escort ambassadors’ carriages, Satō declares this is absolutely not the case.

“Basically, we’re not looking to choose horses on their looks,” he laughs. “We do, however, pay some attention to long-held beliefs about horses. For instance, that many fine horses have a single white sock on the hind left leg, or a double whorl on the forehead indicates a nervous disposition.” He notes with a chuckle that the stables do have a horse with a double whorl, but that the animal is not particularly high-strung. ”We don’t believe the old sayings verbatim. We just keep them in mind.”

The horses of the imperial guard leave behind their old names when they join and are given new ones made up of two kanji, chosen by a draw among employees.

The first step with a new horse is to help them adjust to the different surrounding, and the animals go through various training for this. No riding takes place until it is deemed safe.

Satō says this is important as a horse that is easy to ride gives guards who are just starting out confidence and helps them improve quickly. “Being a teacher for new guards is just as essential a role for the horses as taking part in ceremonies. In fact, it may even be more important.”

Taking part in the ceremonies consists of walking in the street as they escort the carriages. In stark contrast to the quiet environment within the Imperial Palace, the horses find themselves surrounded by buildings, and a great number of people who take notice of them. There may be unexpected noises, and the wind may cause something to fly past, potentially spooking an animal.

The ability to follow the rider’s instructions, whatever happens, and to continue escorting the carriages is a combination of intrinsic character of the horse and daily training.

The horses are led out of their stables every day for their morning training by their riders, and head to the nearby riding arena, where they work up a sweat walking, cantering, and jumping. When they return to the stables, they are showered, and their shoes are attended to. 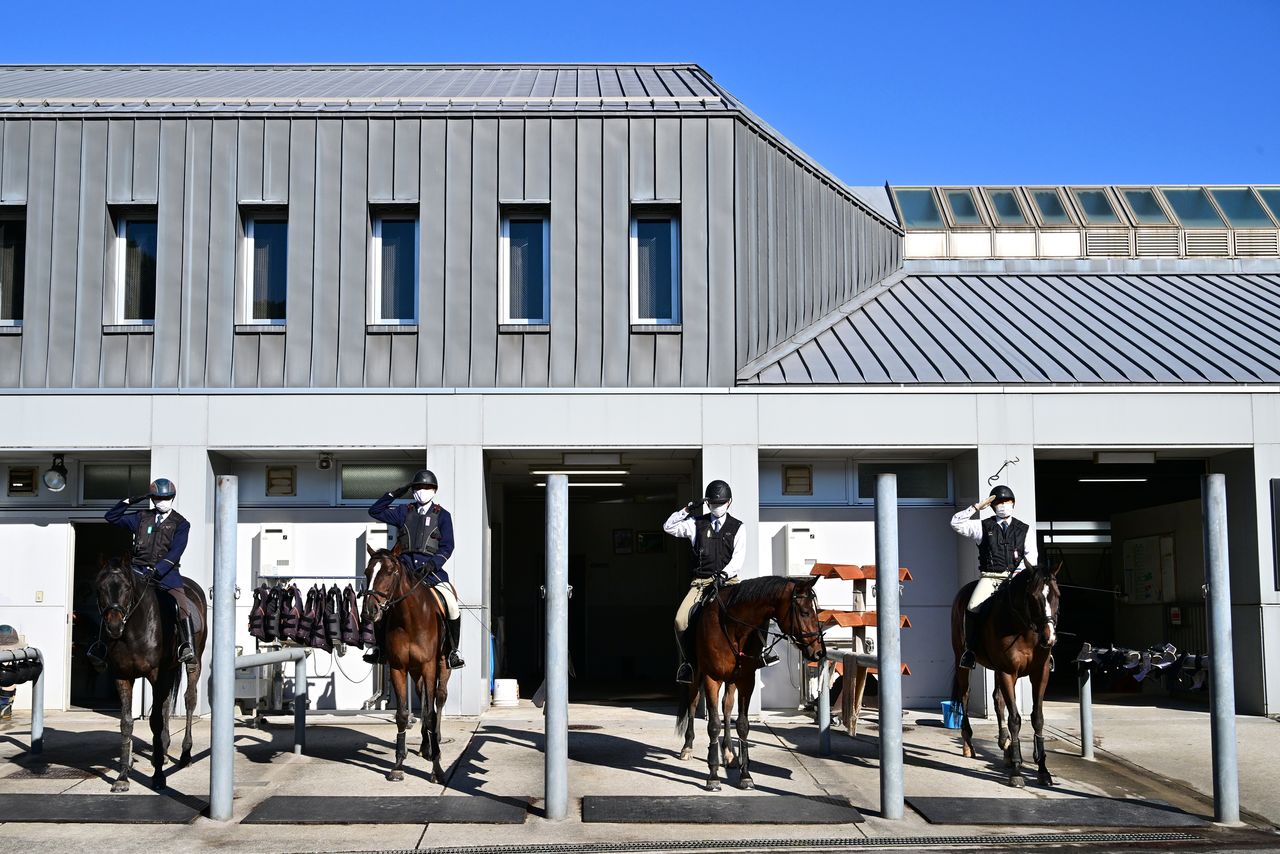 Shōyū, second from the left, lines up with other horses in front of the stables after training.

“The horses don’t retire from the imperial guard until after they are 20, so Shōyū will be working hard for a while yet,” Satō says.

The stable’s 14 reliable horses are an important part of the working team, both for Satō and for the members of the imperial guard. 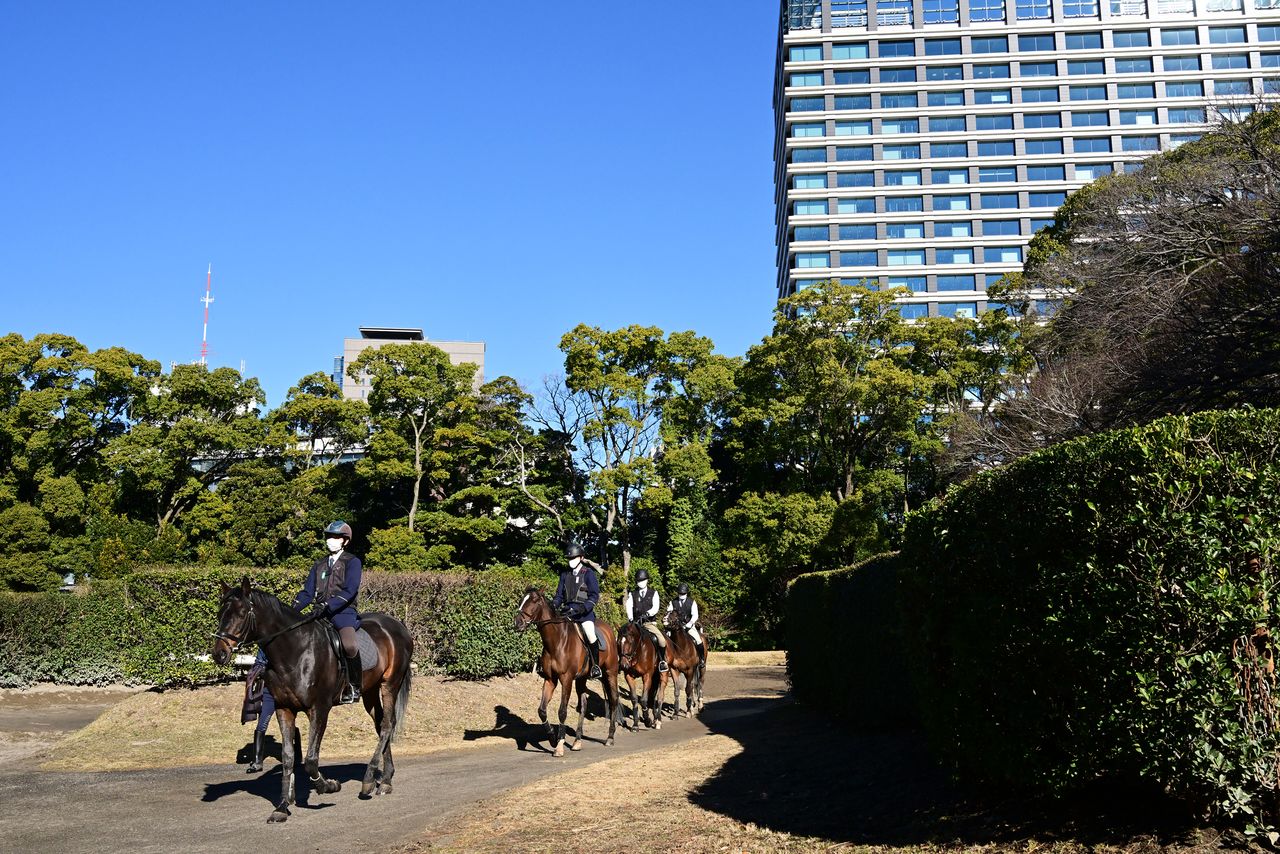 The horses go from the stables to the training arena in a single file. The office buildings of Marunouchi rise up behind the cluster of trees.

(Originally published in Japanese. Banner photo: Shōyū hard at work training. There is no need to jump obstacles as part of his duties, but it is included in the daily regimen as an integral part of training the horses to follow instructions. All photos by Yamaguchi Noriko.)