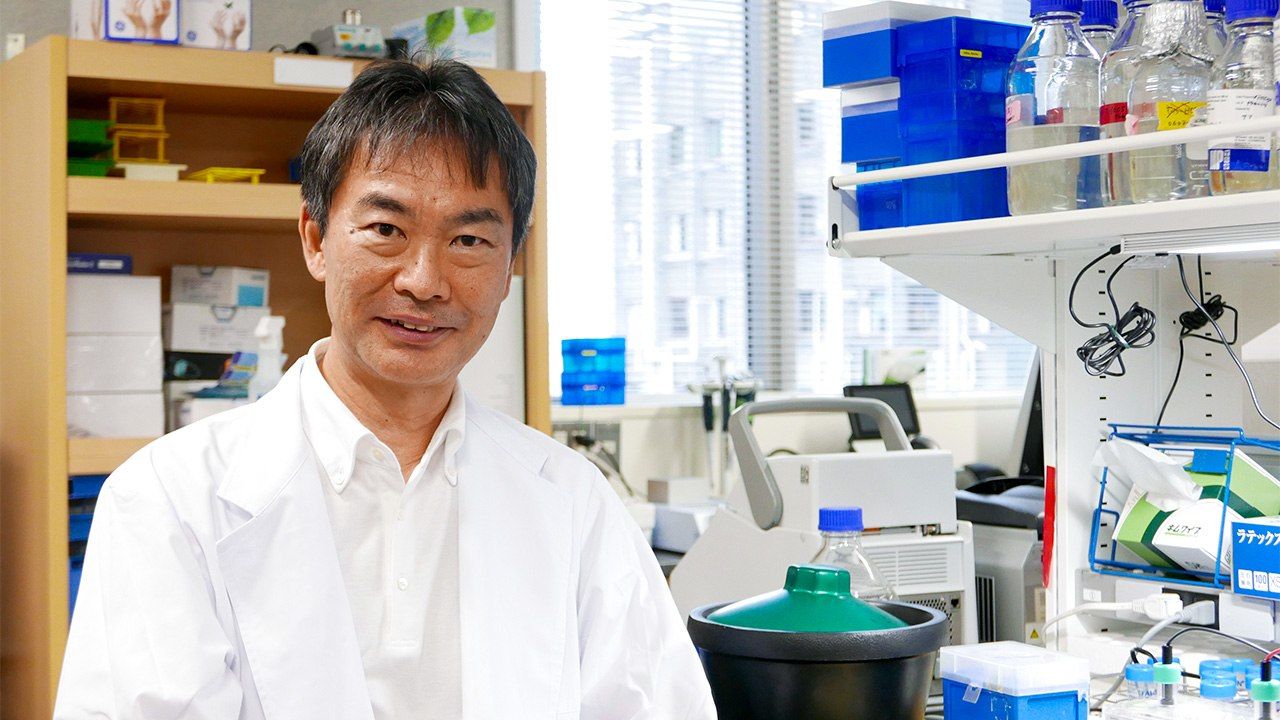 Society Science Health Nov 17, 2021
Miyazaki Tōru’s search for an immunological solution to the riddle of chronic disease has taken him around the world and across disciplines. But his most enthusiastic supporters today may be Japanese cat owners, who have donated millions to support development of a protein-based therapeutic for feline kidney disease.

In July 2021, a news item on a seemingly obscure science topic went viral among Japanese cat lovers. In an interview distributed by Jiji Press, Professor Miyazaki Tōru of the University of Tokyo revealed how funding difficulties stemming from COVID-19 crisis had forced him to suspend clinical trials for a potentially groundbreaking treatment for feline kidney disease, a leading cause of death in domestic cats. Thanks to social media, the news spread quickly among concerned cat owners, and thousands rallied to “help Professor Miyazaki.”

“Practically overnight, millions of yen poured in through the University of Tokyo donations portal,” he recalls. Office staff hurriedly set up a dedicated link for donations to support the project, and in a few weeks, it had collected almost ¥200 million.

Before long, interested pharmaceutical companies were beating a path to Miyazaki’s door, eager to partner with him. “Thankfully, we’ve basically reached an agreement with one of them to make the drug, so the support of all those cat lovers has not been in vain.”

Cleaning House with the AIM Protein

The emergence of this promising treatment for cats is a byproduct of research dedicated to developing novel therapies for human disease with the help of a protein that Miyazaki discovered in the 1990s and has been studying ever since.

The AIM (apoptosis inhibitor of macrophage) protein (also known as CD5L) is produced by immune cells known as macrophages, helping them to identify and destroy dead cells and other debris. “AIM adheres to and ‘flags’ the debris so that macrophages can ingest and destroy it more efficiently,” explains Miyazaki. “It targets dead cells that can build up in renal tubules and cause kidney failure, as well as amyloid beta plaques that can cause Alzheimer’s disease.” Miyazaki believes that AIM could hold the key to controlling and treating a wide range of conditions, from obesity to liver cancer.

As a practicing gastroenterologist at University of Tokyo Hospital, Miyazaki was dismayed by the large number of patients suffering from serious conditions with no cure, such as chronic kidney disease and diabetes. His mid-career switch from clinical practice to research was motivated by the dream of developing therapeutic drugs that might actually halt or reverse such illnesses instead of merely slowing their progress or alleviating their symptoms. With this goal in mind, he chose immunology as his specialty.

At the Kumamoto University Graduate School of Medicine, Miyazaki participated in pioneering research using transgenic mice to study autoimmune diabetes. He then continued his research overseas, first at Louis Pasteur University in Strasbourg (since absorbed into the University of Strasbourg), where he focused on the role of T lymphocytes in the immune system. He is convinced that his 15 years spent overseas were critical to his success as a researcher.

It was in the course of his research at Basel Institute for Immunology— “treasure hunting” for immunity-related genes—that Miyazaki “accidentally” discovered AIM (so named because it appears to inhibit macrophage death, or apoptosis). But it took years of patient work to elucidate how the protein actually functions.

“At Basel, where I had generous funding and freedom to explore, I discovered the AIM molecule. But after that discovery, it took me years to figure out what the protein actually does in the body. When I moved on to the University of Texas at Dallas, I still hadn’t published anything new, but they were willing to fund my AIM research anyway. A year later, I won a research grant from the National Institutes of Health. I guess someone reviewing my proposal thought, ‘This could be interesting.’”

Miyazaki doubts he would have had such opportunities had he remained in Japan. “The system reserves major grants for people with a proven record of successful research, so if you haven’t regularly published papers in peer-reviewed journals, you won’t get the funding.”

Miyazaki traces his big breakthrough to a passing conversation that thrust him into a different specialty. “The University of Texas medical school is famous for its research into lipids,” he says. “Until then, I had been focused like a laser on immunology. Assuming that AIM was related to immunity, I had designed all my mouse experiments to gauge differences in immune function based on the presence or absence of AIM. One day, I fell into conversation with Professor Joseph Goldstein, a world-famous authority on cholesterol metabolism, and he suggested that I try some experiments on atherosclerosis in mice. Ironically, it was the work I did fattening up mice to induce atherosclerosis that provided a critical clue to unraveling the riddle of AIM’s function in the body.”

The experience impressed on Miyazaki the need to break down the walls between specialties, which all too often restrict a researcher’s field of vision. “In Japan, you’re not supposed to stick your nose into other people’s research, and that ethic inhibits the exchange of ideas between disciplines. So, even if I had discovered AIM while in Japan, I would never have figured out how it works.”

Miyazaki had initially intended to continue his research in the United States, but in 2006, at the invitation of the director of University of Tokyo Hospital, he accepted a professorship at the institute’s new Center for Disease Biology and Integrative Medicine, opened in 2003 as part of an initiative promoting the merger of medical science, clinical medicine, and engineering.

Miyazaki’s interest in diverse disciplines extends far beyond the realm of medicine. As a medical student at the University of Tokyo, he came close to quitting in the hope of pursuing a career as a conductor under Ozawa Seiji. In 2006, to mark the launch of his own molecular pathogenesis research lab, he invited the world-renowned Polish pianist and conductor Krystian Zimerman to participate in a forum on the theme of music and science. “Zimerman’s playing conveys an utter absorption and sense of the absolute that I identify with the quest for truth in scientific research, so I was really interested in hearing him talk,” explains Miyazaki.

It was this same openness to ideas and inspiration from other fields that led Miyazaki to his current work on kidney disease in cats.

In 2013, a veterinarian attending one of Miyazaki’s public lectures mentioned to him that kidney disease was a leading cause of death among domestic cats. This was right around the time that Miyazaki had begun seriously studying the relationship between AIM and kidney disease, and he decided to make cats a major focus of his research. His team found that problems with the activation of the AIM protein were responsible for the high incidence of kidney failure in cats. 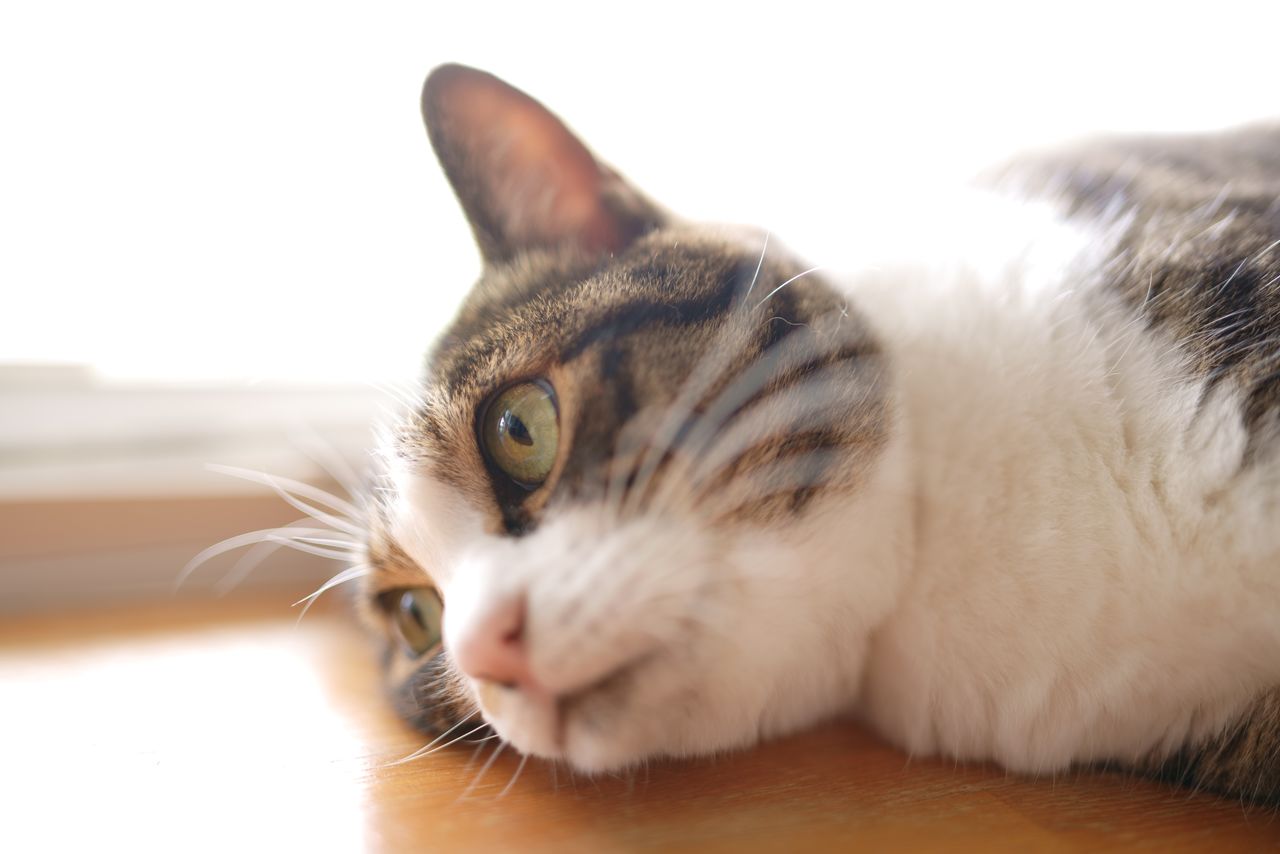 Miyazaki’s research found that cats are susceptible to kidney disease because of problems with AIM activation. (© Pixta)

Miyazaki explains why. “The AIM molecules that circulate in the blood are bound to IgM [immunoglobulin M] antibodies. When there’s waste matter or debris that needs to be removed, the AIM protein launches from the IgM like a jet fighter from an aircraft carrier. It attaches to the problematic debris, flagging it so that the cleansing process can begin. We found that in cats, the AIM is too tightly bound to the IgM to launch, and as a result, the debris doesn’t get cleaned up.”

The team published those findings in 2016, and the next year Miyazaki formed a startup to produce an AIM-based therapeutic drug for cats. But when the COVID-19 pandemic hit, the partner company providing the capital ran into financial trouble. It took a crowdfunding effort powered by Japanese cat lovers to rescue the project.

“This time around, we’re teaming up with a pharmaceutical company,” says Miyazaki, “so that should really speed up our development of an effective AIM drug for cats.”

Since 2021, Miyazaki has also been working with a pet food company to develop a dietary supplement for cats. “We’ve been studying the use of dietary supplements to prevent illness in humans by activating the AIM protein, and we’ve found that the same mechanism works in cats. We expect the cat supplement to go on the market in the spring of 2022. It should go a long way toward preventing kidney disease if added to cats’ food from the time they’re kittens.”

Getting human therapeutics tested and approved is a more complicated and time-consuming process. According to Miyazaki, the idea of treating a wide range of chronic problems by enhancing the scavenging function of AIM has found little support within Japan’s medical establishment, with its emphasis on specialization. Nevertheless, development of human AIM therapeutics is moving forward with the aid of a major government grant awarded in 2019.

“We’ve collected data showing that it works on a variety of diseases, and now we’re deciding which pathology to focus on first in our clinical trials. The idea is to begin with one that’s likely to respond quickly to treatment, so we can get approval for that and expand the scope to other uses. My ultimate goal is a treatment for kidney disease and Alzheimer’s.” Such a breakthrough would be a godsend for millions of dialysis and dementia patients and their families. 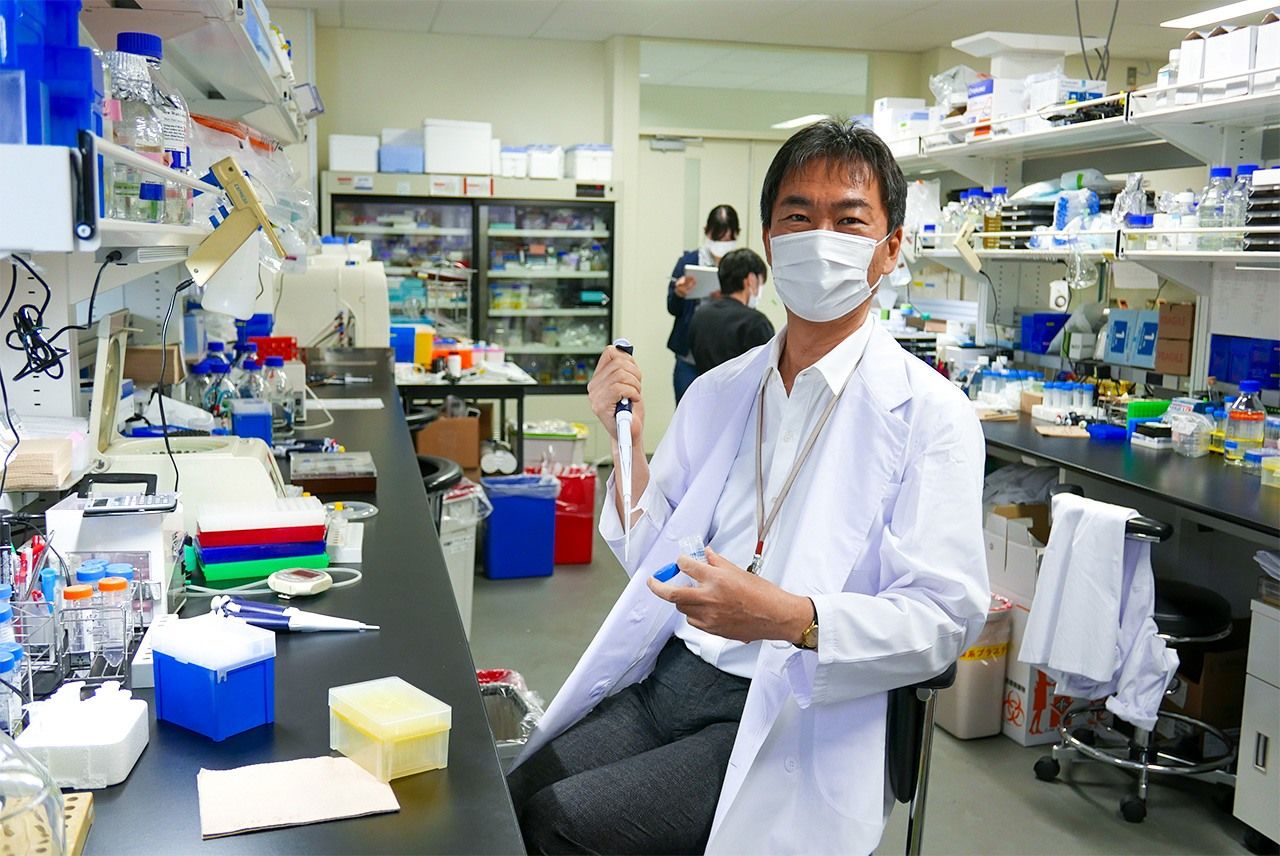 Miyazaki inside his lab at the University of Tokyo.

Therapeutic proteins like AIM, which are already found in the human body, are less likely to cause serious adverse effects than chemically synthesized therapeutics. But commercial production can be time consuming and costly, requiring special biomanufacturing technology and facilities. “There aren’t many Japanese pharmaceutical companies equipped to handle the entire process, from large-scale production using cultured cells to purification. In some countries, like Taiwan, the government has helped build a collaborative manufacturing system for therapeutic proteins, with different companies handling different stages of the process. But Japan isn’t doing anything like that.”

Miyazaki laments the hyperspecialization of Japanese medical research. “I think we’re reaching the limits of what specialization can accomplish,” he says. “In Japan, where scholarship in general is very turf-conscious, medical research has fragmented into ever narrower specialties. This approach isn’t going to lead us to cures for incurable diseases, and I think it’s time people recognized that.” Miyazaki also sees a need for stronger support for researchers who are struggling to translate basic medical research into therapeutic applications.

In recent years, the University of Tokyo has taken steps to bridge the gap between basic research and commercial applications by investing in university-led startups. On October 1 this year, it announced the creation of a ¥60 billion ($536 million) fund aimed at doubling the number of startups—to about 700—by 2030.

“I personally feel that, in medical school in particular, it’s not enough to conduct research for the sake of publishing papers,” says Miyazaki. “It seems to me that a medical researcher’s work isn’t complete until the results reach patients in the real world. For that to happen, you need to raise capital and launch a business. The university has finally created a system to support that process, and it needs to teach medical entrepreneurship as well. The business angle is vital, not as a way to get rich but because it’s the only way to get new therapies to the patients who need them.”