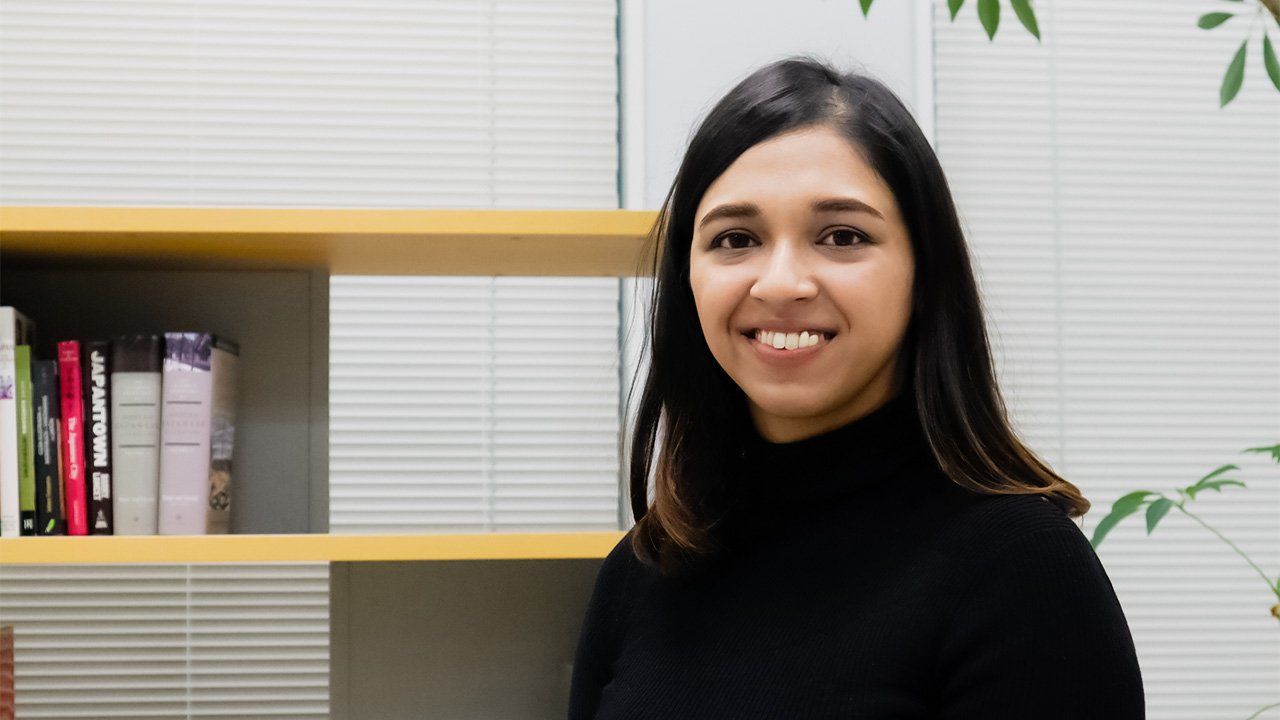 An Entrepreneur/Psychologist Finds Ways to Support the Nursing Profession

People Society Work Health Apr 6, 2022
The COVID-19 pandemic has been an ongoing struggle for healthcare professionals. Among them, the psychological toll has been heavy for nurses, who work at patients’ sides. We spoke with Sakura Wimalasuriya, an entrepreneur addressing psychological support for nurses, about the background to her start-up and the nursing environment in general.

Born in Nagoya in 1995. Certified psychologist and CEO of Plusbase Inc. Graduated from nursing college in 2017 and began working at an acute-care hospital. She quit nursing due to depression, since which she has launched a business aiming to provide psychological support to nurses.

Within a year of graduating from nursing college and joining an acute-care ward, Sakura Wimalasuriya—who goes by the more easily remembered Wim Sakura in Japan—lost her smile. She recalls how such workplace rumors made her realize she was emotionally unwell.

“I couldn’t sleep or eat, and couldn’t stop crying after I woke up. Yet I thought if I tried harder, I could overcome it and things would be alright.” A doctor from the psychiatric department learned of Wim’s troubles, and diagnosed her depression. She had devoted herself to helping others as a nurse, but was left feeling defeated.

A Desire to Save Lives

Wim was born in Nagoya to Sri Lankan parents, and spent her early childhood in Sri Lanka and Britain. But she has lived in Japan since elementary school.

“In school, I was conscious that being Sri Lankan made me different. I began to feel a connection with Sri Lanka and other developing countries. My parents always told me that Japan was fortunate as a peaceful country with a high standard of education. From a young age, I had a strong sense that, since I was lucky enough to grow up here, I should use what I learned to help others.”

But she says she was also introverted at the time. “I hated the name Sakura, since I didn’t look Japanese, even though I tried my hardest to act Japanese.”

She went to a huge junior high, where she was surrounded by a diversity of students, including many from abroad. Sakura felt a sense of release, and immersed herself in extracurricular and student council activities. “I realized that my name was an asset: People remembered it immediately.”

Wim began thinking about her future during junior high. She recalls being deeply moved by a documentary about a Japanese woman who went to Africa with Médecins Sans Frontières as a midwife. Her mind turned to healthcare work, where she hoped she could save lives. Wim was in elementary school when the 2004 Indian Ocean earthquake struck, but she has vivid memories that the tsunami brought devastation to the Sri Lankan coast, where it took the lives of members of her father’s family.

Punishing Herself over Patients’ Deaths

After graduating high school, Wim entered nursing college. “The 2011 Great East Japan Earthquake happened around the time I was taking high school entrance exams and the 2016 Kumamoto Earthquakes coincided with my National Nursing Examination. I developed a strong urge to work in emergency and critical care partly because I wasn’t able to join volunteer activities to help the victims directly.”

When Wim started work, she achieved her dream of working in the emergency ward.

“Patients were brought in by ambulance and often needed emergency surgery. We couldn’t speak: it was a race against time. In other departments, senior nurses could fix any mistakes made by novices, without risking the patients’ lives. But in my area, I felt constantly stressed that mistakes caused by my lack of knowledge or skills could put lives at risk.”

Just two weeks after she started, she recalls, a patient she cared for in her first week took a sudden turn for the worse and passed away. “Although I lost relatives in the disaster in Sri Lanka, I’d never experienced death in close proximity. The nursing front line was a reality shock and a source of trauma for me,” she recalls. 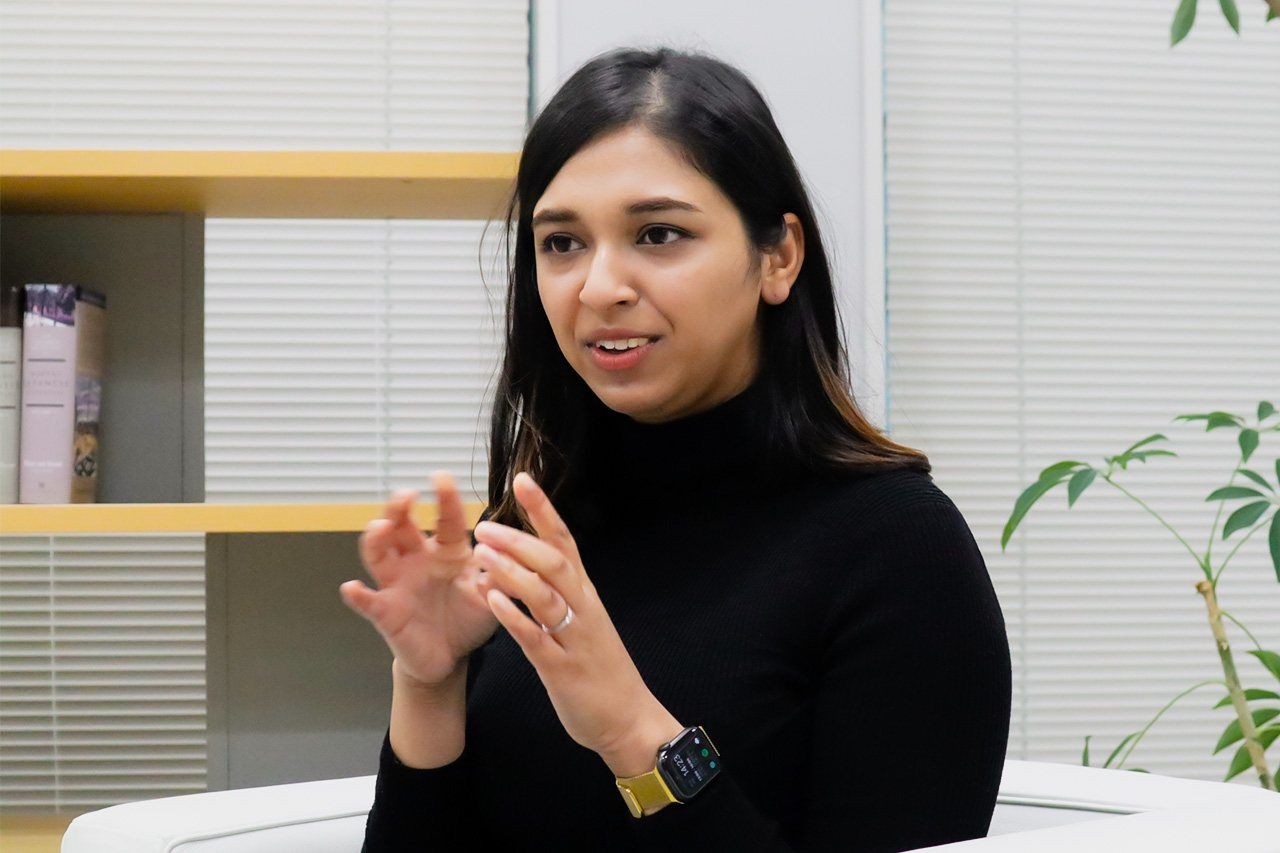 Thereafter, whenever Wim witnessed a patient dying, she blamed herself.

“When someone deteriorates rapidly before your eyes, there’s little to be done. Viewed objectively, there’s a limit to what a newcomer can do. But still, I was troubled, thinking things might have been different if I had more knowledge or worked a bit faster. I couldn’t switch off after work, and had trouble sleeping at night. I was constantly wracked with anxiety.”

We Can Change Our Thinking

Why had she become psychologically unwell? She left work due to depression and, after recuperating for some time, started questioning the causes. This led her to enroll in an online university course in psychology. “It was then that I realized my beliefs in what a nurse should be were too rigid.”

She recalls: “It wasn’t me who was wrong, but my thinking. But we can change the way we think. I had previously managed to transform my negative take on things into a positive one when I entered junior high. When I learned about cognitive-behavioral therapy, I saw that I could take care of my psyche by fixing bad mental habits, which set me at ease.”

In one year, Wim qualified as a certified psychologist. She also had the chance to study traditional Ayurvedic therapy in Sri Lanka.

“Ayurveda is one of the three major traditional medical systems recognized by the World Health Organization,” Wim says. “It originated in India and spread to Sri Lanka. Ayurveda values the importance of self and family and also aims to prevent not only physical but also mental illness, from an early stage. It has strong connections with lifestyle remedies that are widely accepted in Sri Lanka. Through these ideas, I learned the importance of taking care of your own heart.

“Meanwhile, I grew concerned about the low awareness of mental health in Japan, despite the advanced medical technology.”

“After I learned how to care for my own mental health, I rejoined the workforce. But at the Tokyo hospital where I worked, I saw colleagues and superiors become depressed and quit. It occurred to me that there must be many nurses in Japan with similar troubles, and I felt the urge to do something.”

However, she notes, Japanese hospitals are hierarchical organizations, where people are appraised for complying with their superiors. “This often makes them resistant to new ideas. It’s hard to change anything from within the system. I felt we needed to create an open-minded and sustainable external structure if we hoped to help more people. This led to my interest in social business.” 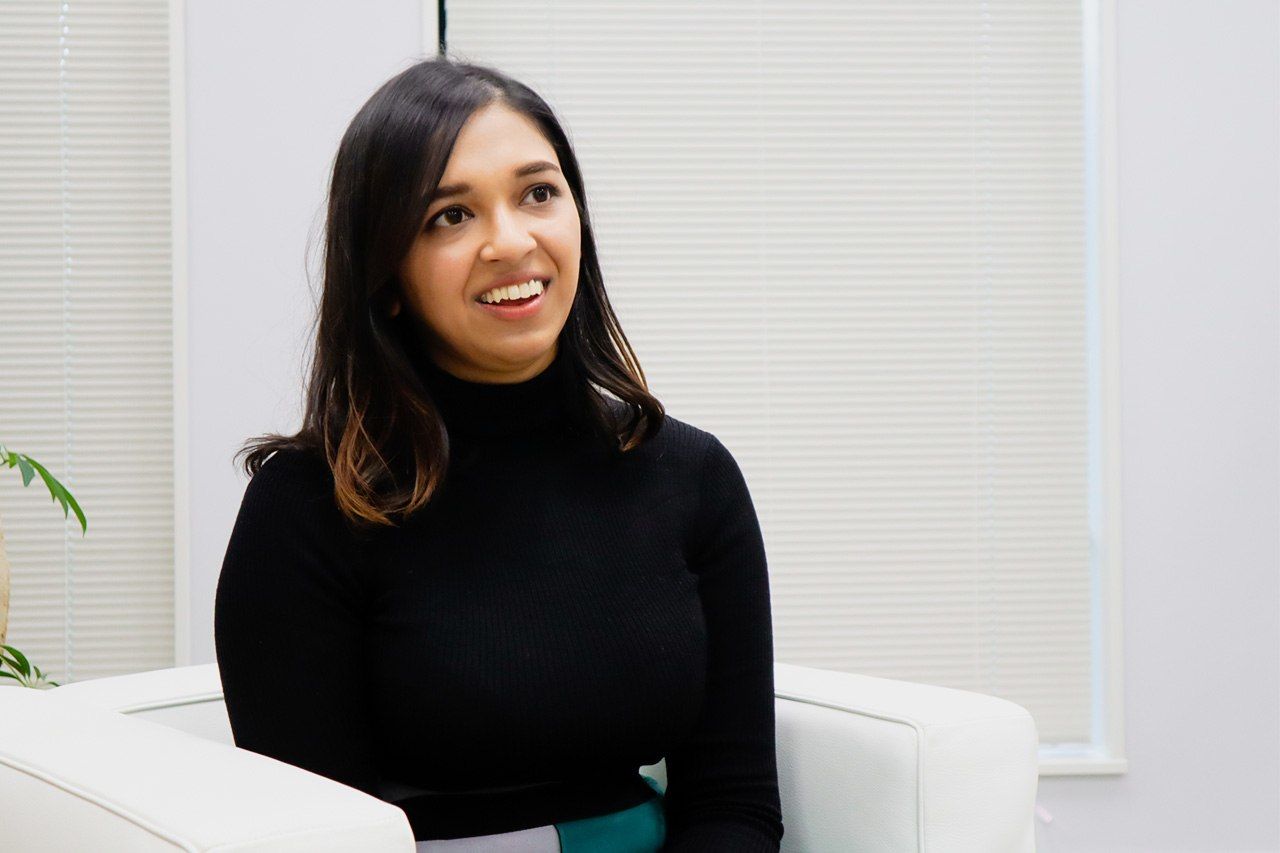 “The program was designed to develop a mind and skill set to undertake innovation. It also gave me an instant network of 100 people. They came from a range of fields, and had strong vision and enthusiasm. When I was in doubt, they proposed study sessions and helped me out. Many were deeply sympathetic with the issue of nurses’ mental health. With the encouragement of my peers, I was able to take the first steps toward launching my business.”

An Online Service to Visualize Feelings

Wim launched Plusbase in February 2021 aiming to create a structure to provide psychological support for workers.

“Nurses in particular have the care of patients as their main focus, and tend to neglect their own mental health. Our business offers medical facilities an online app with testing tools that visualize users’ mental state, can recommend tailored self-care, and has e-learning materials optimized for nurses.”

To date, 90 nurses in the field have cooperated in testing the effectiveness and user-friendliness of the tools and materials being developed.

“When they use our tools, we can verify whether they actually help resolve issues for nurses, and we can keep making improvements. In spring 2022, we’ll be launching trials aimed at introducing the system at medical facilities.”

Wim and her team raised funds for web service development, as well as medical and research institution trials, from venture capitalists and angel investors. She now leads a group of staff around her age, including an online community operator, an editor, and an online marketer. She herself works a few days a week as a nurse at a psychosomatic clinic in Tokyo.

“We can tackle matters from a range of perspectives because each of us still works in our respective field of expertise. I believe this style of working, emphasizing skills over job titles, is suited to this day and age, when the focus is on utilizing the unique traits of individuals.”

The Importance of Team Play

Many nurses joined the profession with the same strong desires that motivated Wim: to save lives and to be of service to others. But their dedication goes unrecognized, leading many nurses to burn out and quit.

“Nurses handle a range of medical treatments, administering intravenous drips and medications, under the direction of doctors. But there are also many tasks that are hard to define. Nurses respond to a range of patient requests: fetching things, rubbing backs, assisting when they can’t sleep, and trying to lift patients’ spirits. It’s hard to evaluate these minor day-to-day tasks. On the other hand, in this ‘life or death’ workplace, there’s a keen awareness of oversights: and a tendency to only focus on mistakes.”

On the front line, though, Wim argues that teamwork is essential. “Nurses tell me, no matter how busy it is, they can do their best with a good team. I hope to create a culture where they receive positive feedback—one with encouragement to not repeat mistakes, and praise shared to openly note their strengths.

“No matter how close nurses are to their patients, it’s hard to evaluate how they perform and to reflect that in their pay. That’s why it’s important that they support one another. If a nurse is tired or mentally unwell, it’s hard to communicate with colleagues. Therefore, taking care of themselves benefits the team and the patients. I hope to do all that I can to help individual nurses to look after themselves better.” 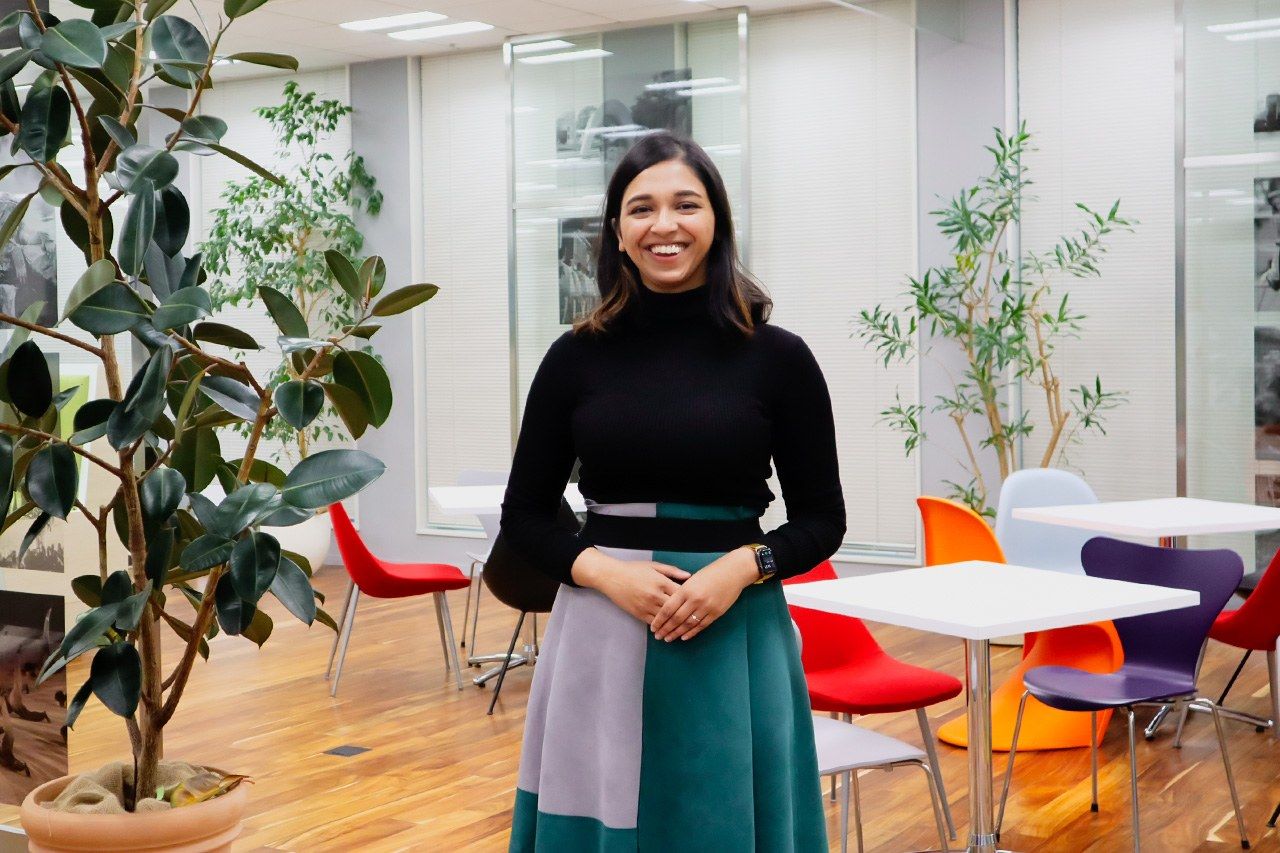 (Originally written in Japanese by Kimie Itakura of Nippon.com. All photos © Nippon.com.)