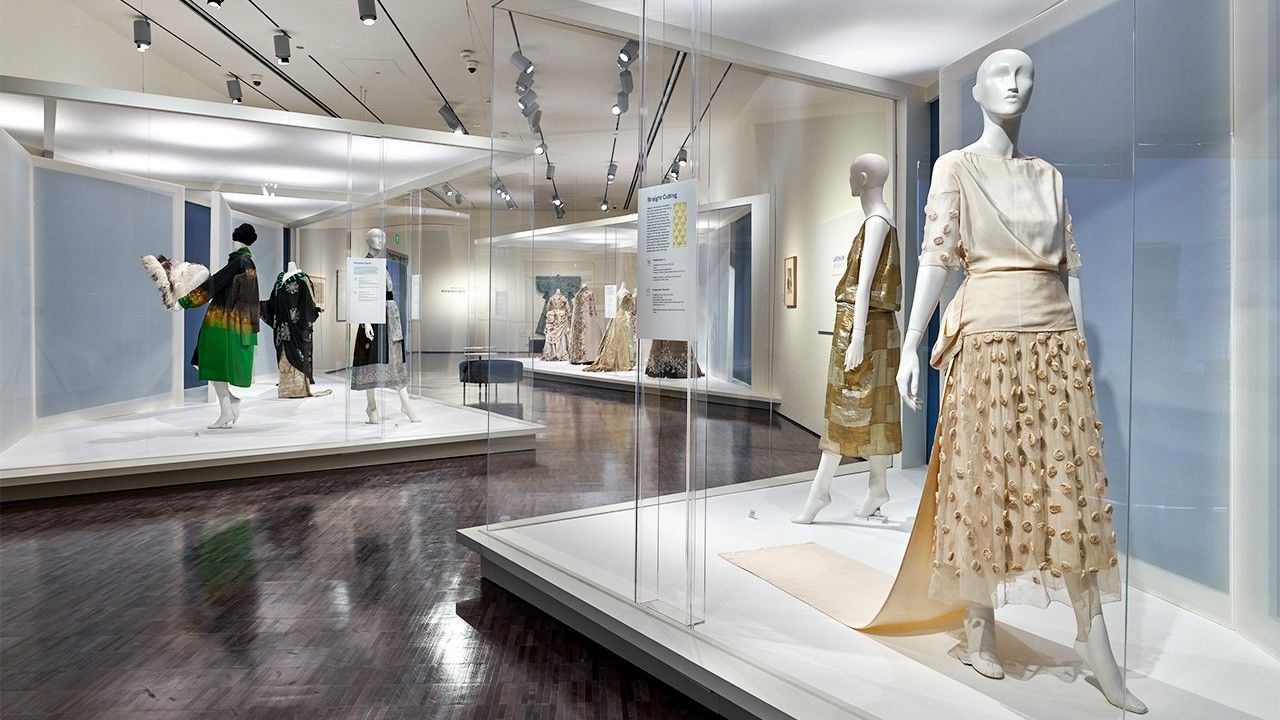 How the Kimono has Influenced the World of Fashion

Culture Lifestyle Fashion Entertainment Mar 22, 2019
A curator of the exhibit Kimono Refashioned that is currently touring the United States looks at the impact the Japanese kimono has had on global fashion.

The kimono today enjoys greater prominence and influence in the world of fashion than ever before. There was a time, though, when the traditional garment seemed in danger of disappearing from the daily wardrobe of Japanese women, relegated to rare outings and special occasions for formal events such as weddings, coming-of-age days, and tea ceremonies. However, in recent years it has enjoyed a resurgence, gaining attention both in Japan and abroad as a sophisticated and elegant form of dress suitable for everyday and formal occasions. The kimono has influenced the ideas of many designers, providing inspiration for new fashion resources. It could be argued that few traditional garments have inspired designers to the degree that the kimono has.

For its spring/summer 2018 men’s collection, the fashion house Maison Margiela has provided some spectacular examples of the kimono’s influence. John Galliano of this house designed a men’s coat from a colorful and luxurious antique obi, the sash to tie a kimono. Similarly, Christian Louboutin designed a pair of boots for the autumn/winter 2017 collection of luxurious textile inspired by a late Edo period (mid-nineteenth century) kimono textile design, with bamboo, plum blossoms, and cranes. 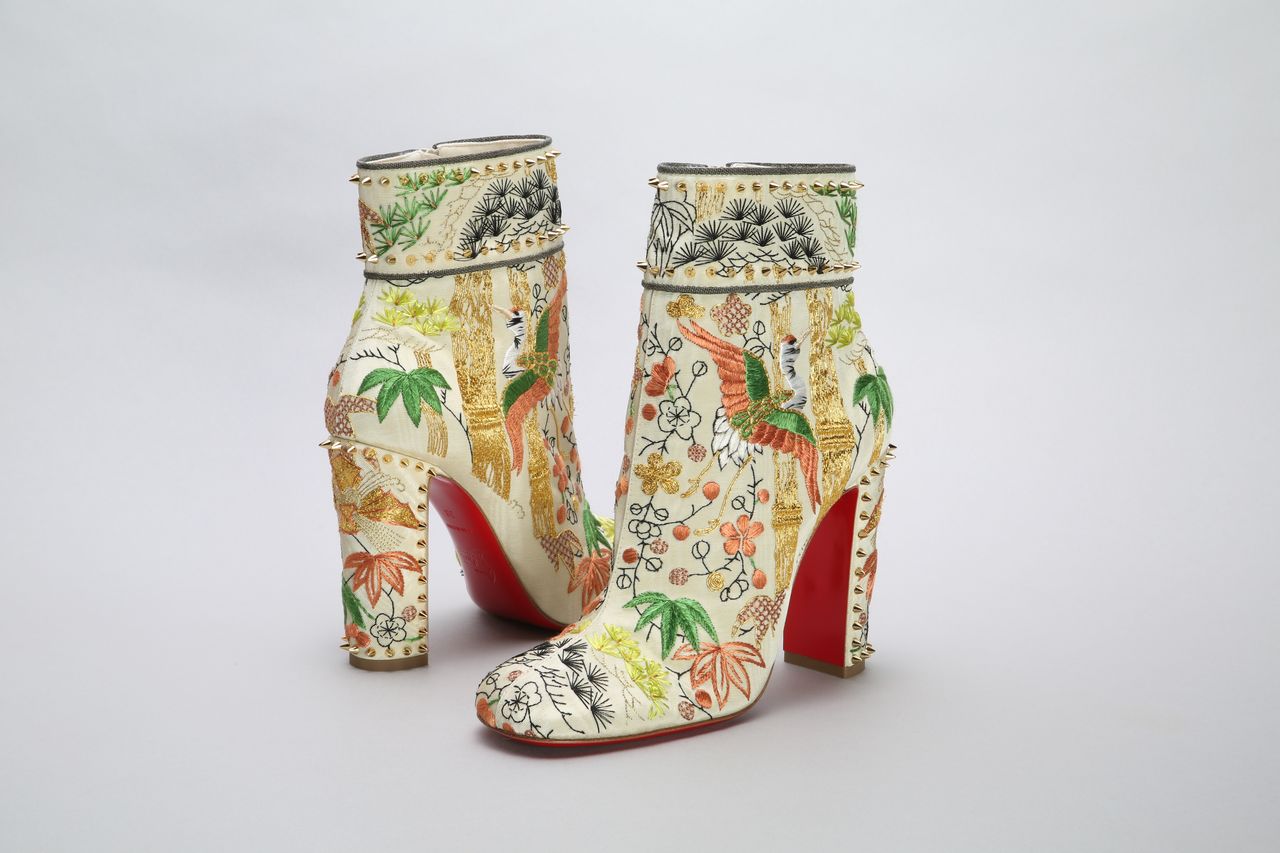 A particularly interesting illustration was a men’s collection by Tom Brown for spring/summer 2016. Drawing on Japan’s traditions of exquisite craftsmanship and design sensibility, it incorporated kimono-inspired designs into otherwise sober-looking business-style suits to create a contemporary pop style. 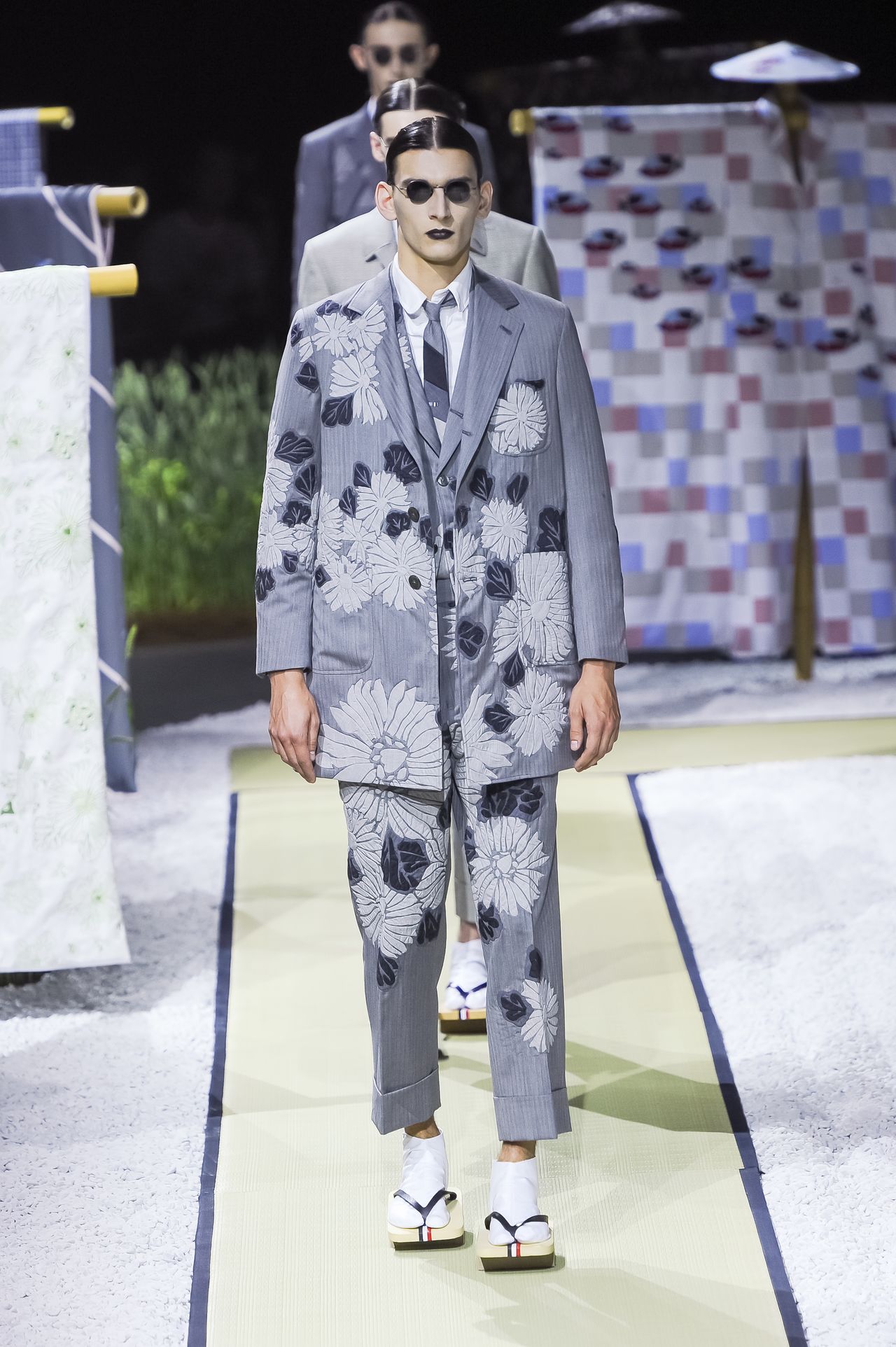 A men’s suit by Tom Brown for the spring/summer collection 2016. (© Fashion Press)

Other famous designers who have explored the creative possibilities of the Japanese kimono include Alexander McQueen, Yves Saint-Lauren, and Cristóbal Balenciaga. Madeleine Vionnet and Paul Poiret in the 1920s and Jacques Doucet in the late nineteenth century also were captivated by the unique culture of the kimono. 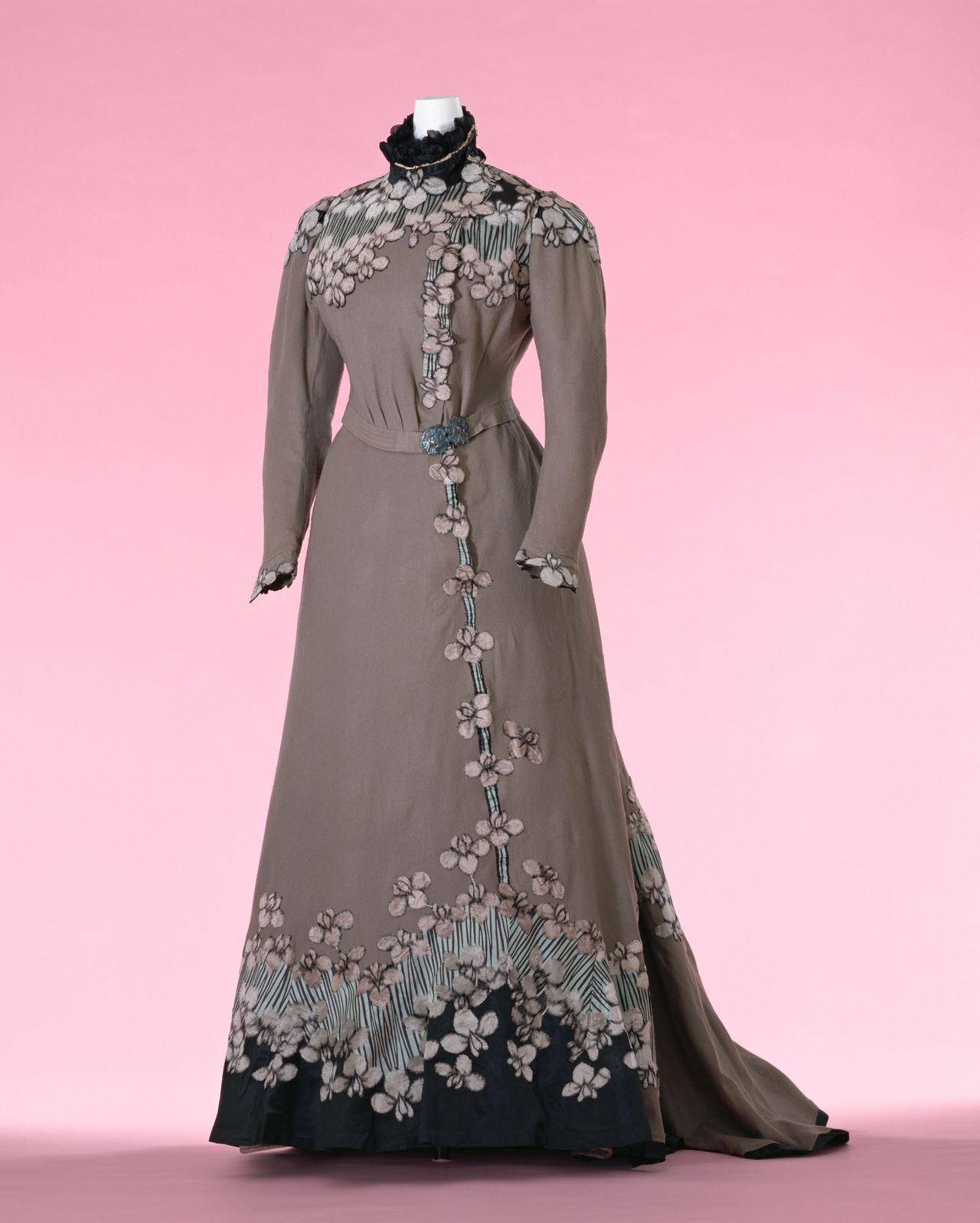 Japonism and the Kimono Craze

Researching the enduring fascination with the traditional styles of Japan reveals the enduring influence of the kimono on Western aesthetics. In the seventeenth century, chief factors (traders) of the Dutch East India Company in Japan brought padded kimonos back with them when they returned to Holland, and kimono were prized as indoor wear for men. Lightweight and warm, these exotic Japanese dressing gowns were called Japonse rok. They grew to be extremely popular, appearing in portraits of the time and even spawning copies in neighboring countries. 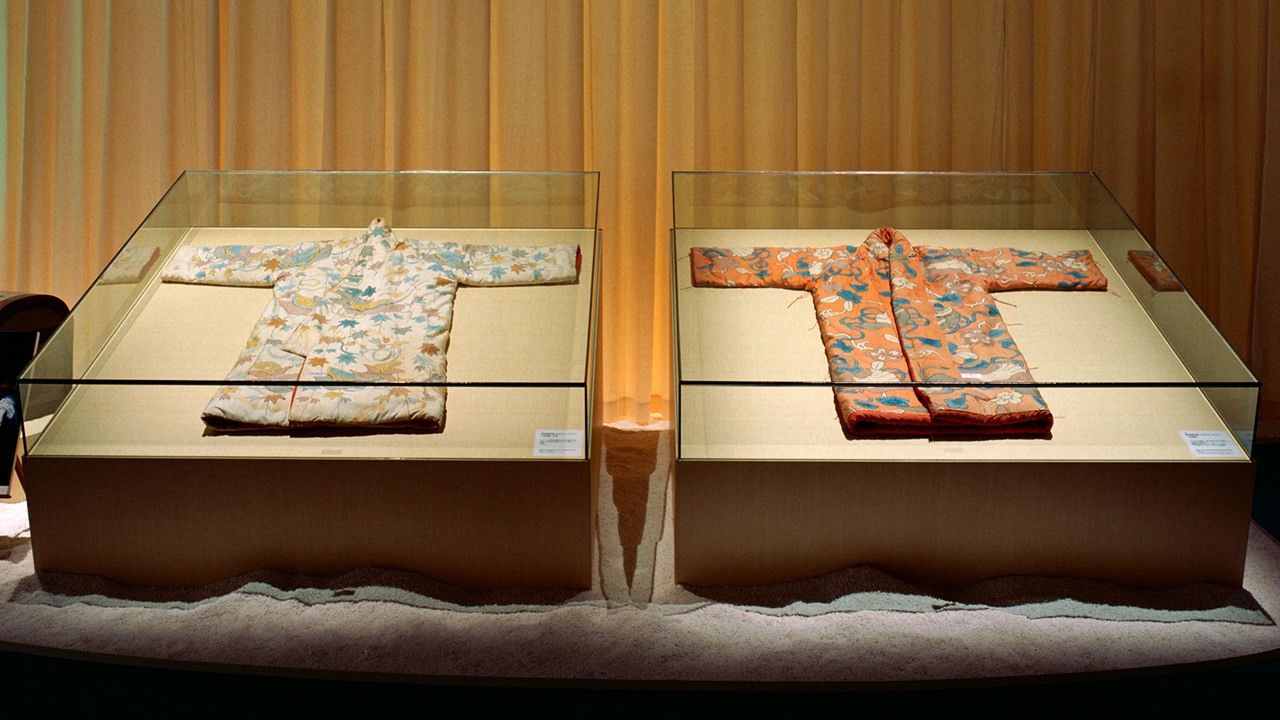 Japonse rok at the exhibition Japonism in Fashion in 1996. Photo by Hatakeyama Naoya. (© Kyoto Costume Institute)

A wave of enthusiasm for all things Japanese swept Europe and the United States during the second half of the nineteenth century; this came to be known as Japonism. The impact modes of art like ukiyo-e had on impressionist painters is well documented. However, less well known is the influence that the kimono also had on fashion.

The relationship between Parisian fashion and the kimono developed in natural progression. Women fell in love with the beautiful and exotic clothing, wearing the garments to relax in at home. Designers in Paris and London then started to use kimono fabric for their own creations. Japanese-inspired designs eventually came to be used for silk fabrics by textile makers in Lyon, marking their debut on the Parisian fashion scene.

Paris designers at the beginning of the twentieth century were the first to take note of the graceful, draping form of the kimono. Around 1910, coats and dresses with silhouettes echoing those of uchikake kimonos or the kimonos worn by the beauties depicted in ukiyo-e prints began to appear. The nukiemon décolletage style of lowering the rear hem to expose the nape of the neck became popular, along with long sleeves and details evocative of ornately decorated obi sashes.

Pioneering designers like Vionnet and Poiret drew on the straight cut construction technique of the kimono, and in the 1920s fashion was increasingly marked by cylindrical designs composed of straight lines made by sewing together rectangular-shaped pieces. This brought a new methodology into traditional European dressmaking, which was based on the ideals of volume and three-dimensionality. From this period, the structure and shape of dress changed as designers moved away from obeying the shape of the human body and began to embrace the wider possibilities of a freer range of forms. In this way, the kimono went beyond the superficial appeal of the exotic and impacted fashion as a whole. 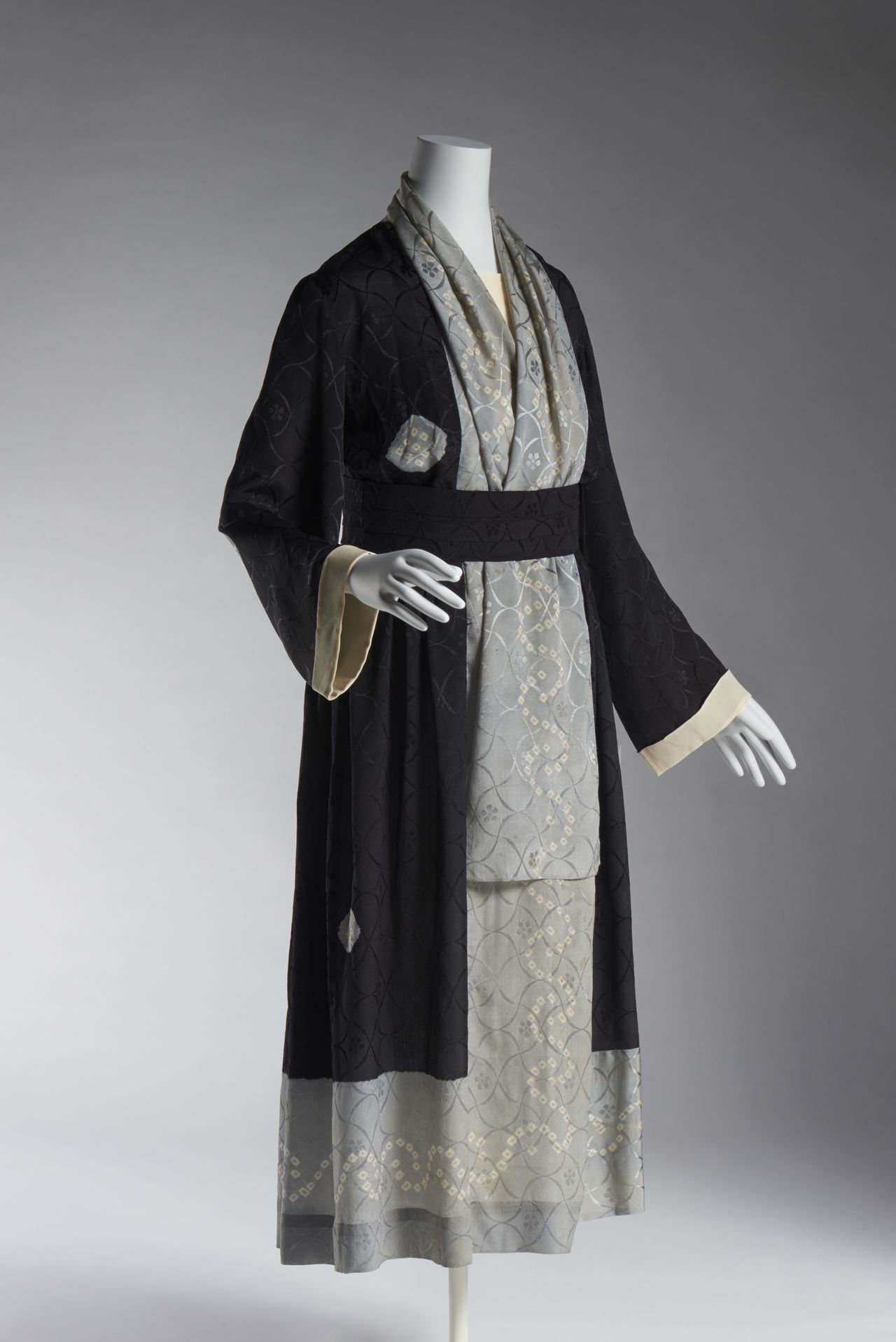 The exhibition Kimono Refashioned examines this diverse relationship between the kimono and Western fashion from the second half of the nineteenth century to the present. The show opened at the Newark Museum in October 2018 before touring to the Asian Art Museum in San Francisco in February 2019. It will travel to the Cincinnati Museum in June, completing its tour of three major American cities by the fall. This exhibition, for which I initiated the plan, is a cooperative effort between the Kyoto Costume Institute and the three museums in the United States. Along with looking at the influence that the kimono has had on Western fashion, it introduces the works of Japanese designers from the perspective of this legacy. 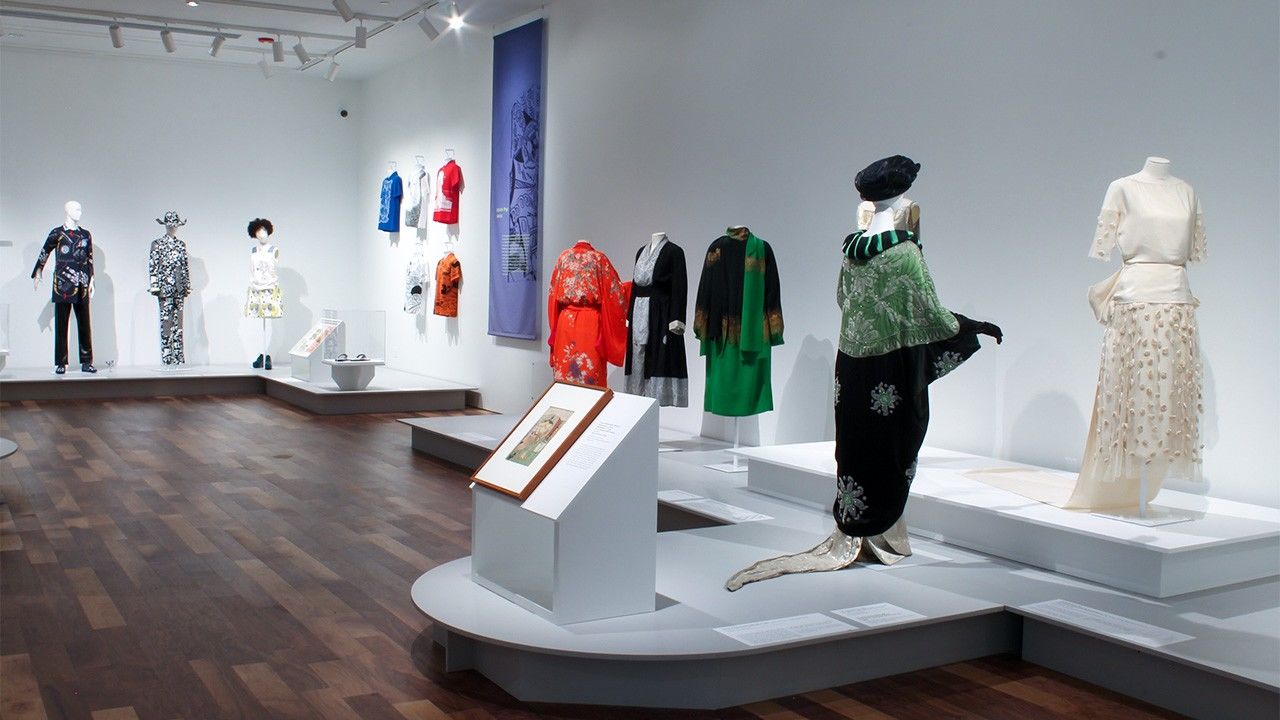 Exhibits from Kimono Refashioned at the Newark Museum in 2018. (© Mike Peters) 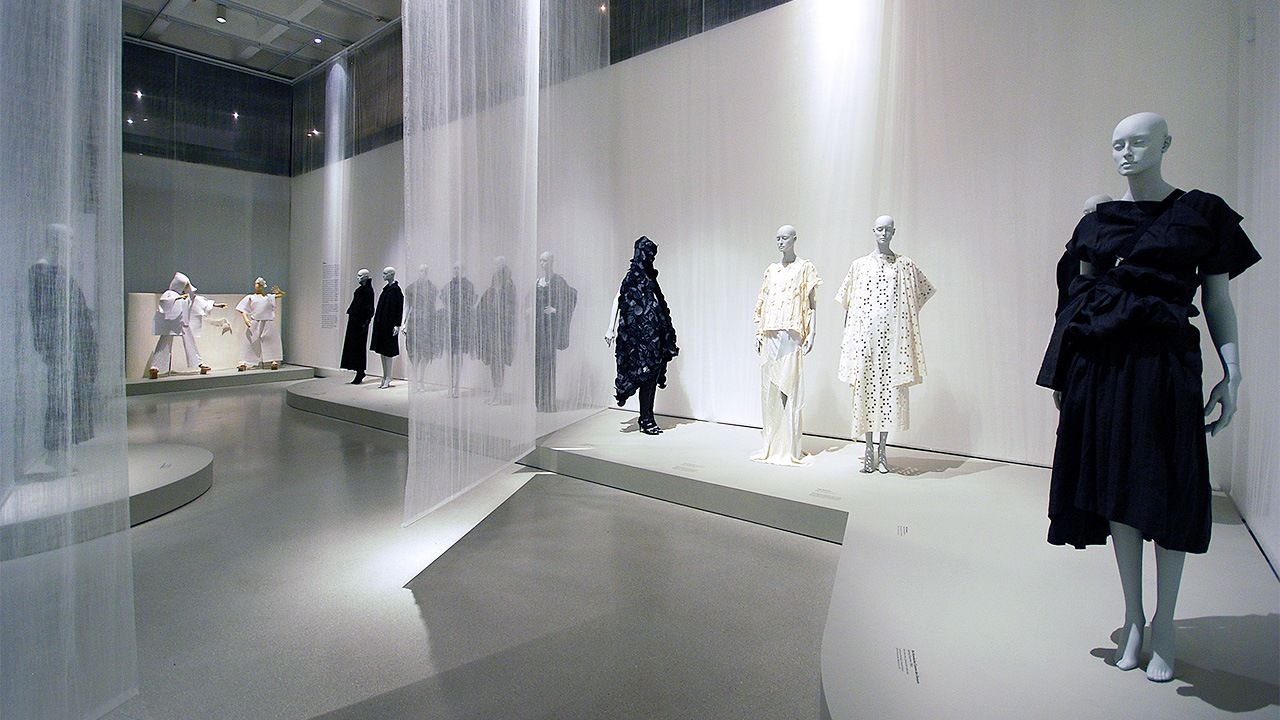 The Japanese designers used straight-line dressmaking that showed a clear debt to kimono culture, enveloping the body loosely rather than closely following its natural curvature. From the perspective of traditional Western dressmaking, which looked to re-create the lines of the human frame, the approach was highly unorthodox. Initially, critics condemned the designs as lacking any sense of form. But what they failed to recognize is that the designs came from a sensibility free from the rules of the traditional Western approach—one that embraced the essence of the kimono to take a more abstract approach to fashion. 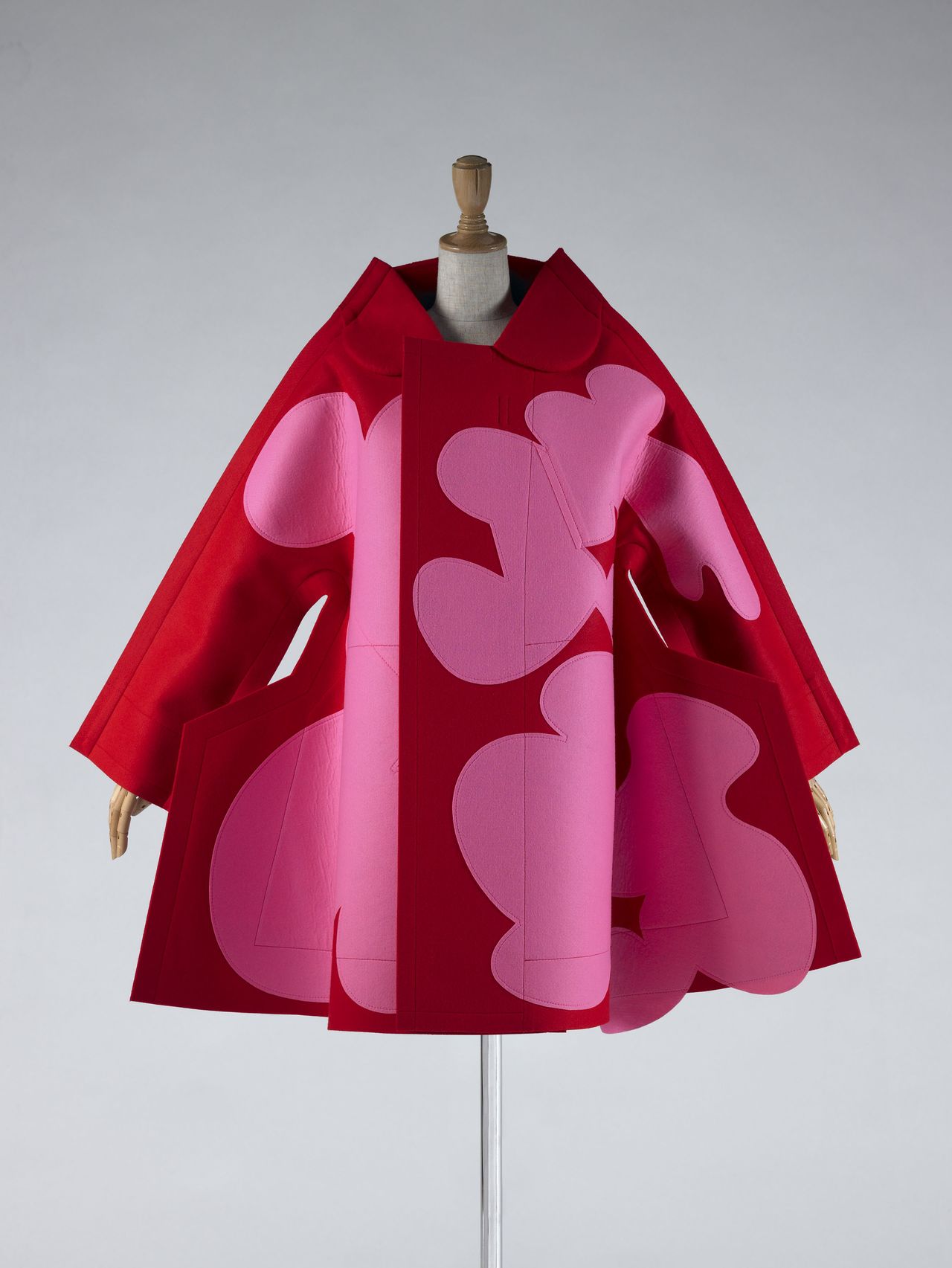 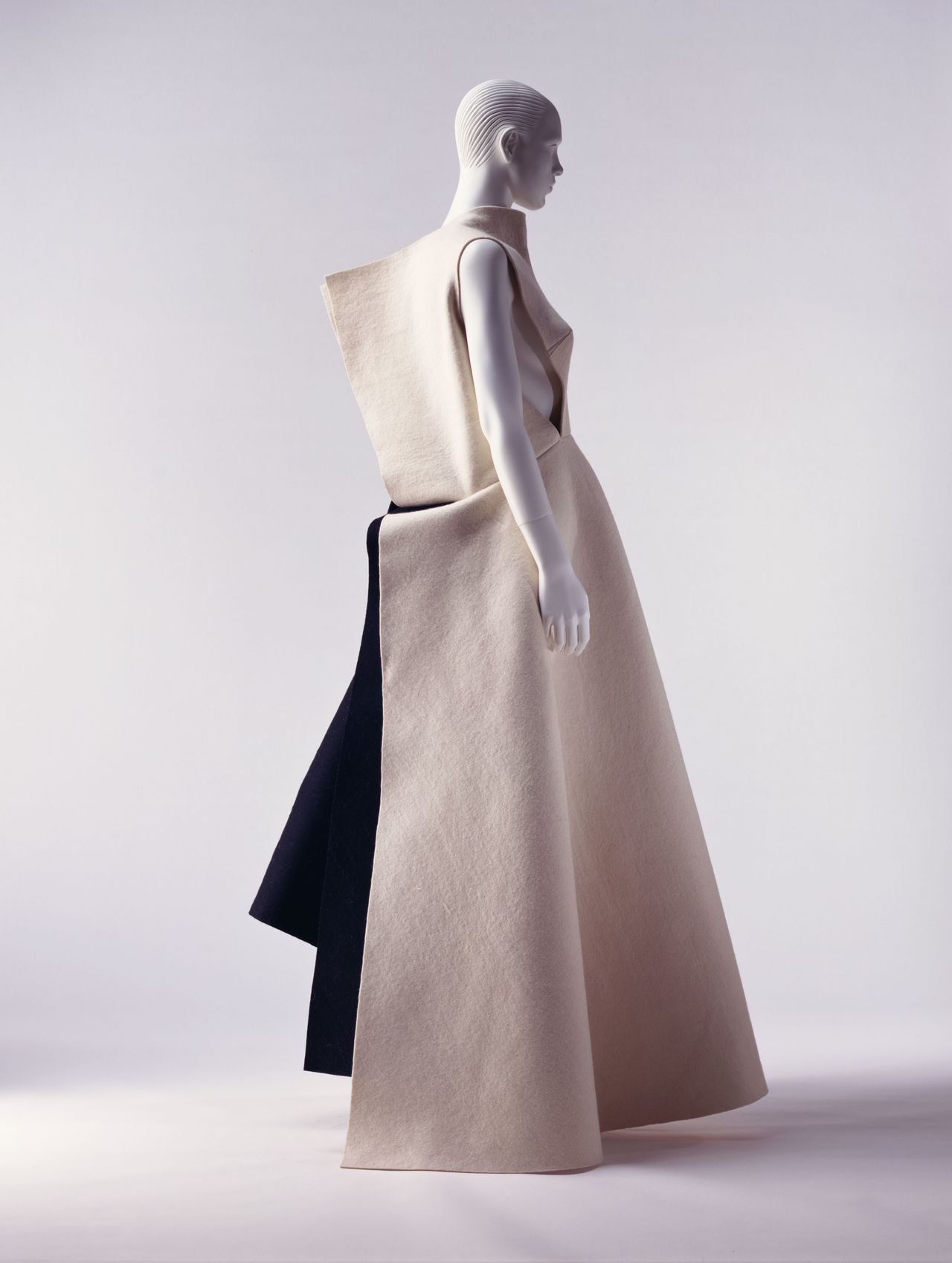 The kimono occupies inexplicable spaces in the notion of Western clothes, and in the age in which fashion was shifting to a freer definition of shape and form, this different sense of space gave Japanese designers an advantage. Their creations helped to break down the historic and symbolic meaning of Western clothes, bringing about a more ambiguous definition of femininity by dismantling the idea that women’s clothes should emphasize flowing, curvaceous lines. Ultimately, Japanese influence dismantled the rigid Western notion that had dominated until then and helped to turn fashion in new directions.

Japanese Textiles in Tradition and the Now

Although these creators’ designs themselves were often controversial, their usage of materials was highly lauded. Fabric, or material, is an essential element for achieving new expressions in clothing and for bringing about dynamic forms that combine cutting edge qualities and creativity. In the kimono, with its homogeneous form, fabrics hold the key to differentiation. The designers inherited this tradition and regarded the choice of fabric as a matter of primary importance, even before they started thinking about design.

In developing new fabrics, they were helped by Japan’s textile industry, which has inherited from a wide range of distinct skills related to kimono—weaving, dyeing, and so on—in various regions around Japan. Despite the shift from traditional Japanese garb to Western-style clothing, the modern Japanese textile industry has inherited the tradition, and has continued its unstinting development of new technology. Techniques utilizing cutting-edge technology continue to attract attention from experts around the world. 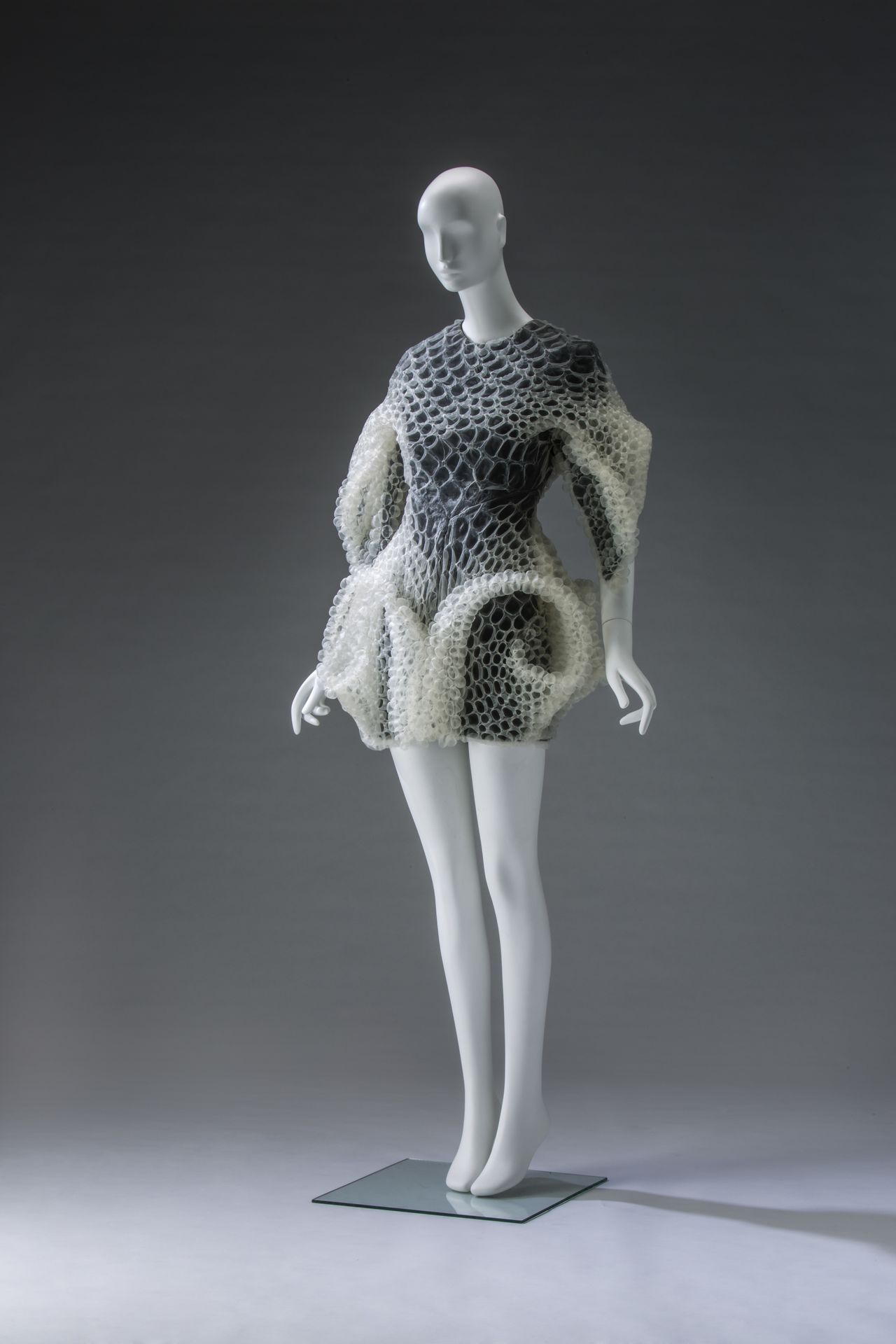 The Future of the Kimono

Today, fashion is shared around the world. This familiarity produces in our daily lives a sense of convenience, but is also a source of monotony. Items that are broadly shared ultimately belong to no one, and in an age like ours, the position of the kimono outside the Western European cultural context is an advantage. The kimono, developed within the unique context of Japanese culture, offers fresh ideas and new inspirations to designers at a time when there are growing calls for greater diversity in what we wear. The kimono is certainly not a thing of the past, but will continue to capture people’s imaginations and stimulate and inspire creators for many years to come.