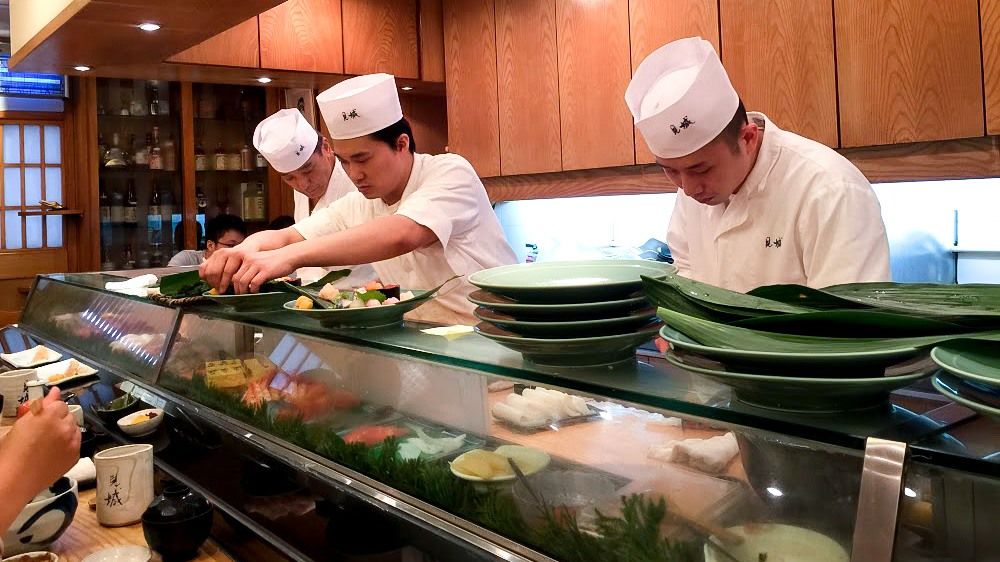 Society Mar 28, 2019
Japanese service providers are gaining popularity in major cities across Asia, as many Japanese migrate within the region, bringing their well-honed skills. What are their perceptions as they undertake their work?

Even as Japan’s population continues to fall amid the declining birthrate, the number of Japanese people living abroad is on the rise and now exceeds 1.35 million. Just over 1% of Japanese reside overseas, forging lives and careers in foreign countries. This article highlights examples of strategic use of cultural capital in migrant experience, focusing on individuals who work in the service sector, from restaurant business to personal care, in Asia.

“Here’s your chūtoro,” says Takahashi Yoshihide (a pseudonym) as he places sushi on the counter and instantly returns to preparing more fish. It is still before seven in the evening, but the tables and counter seating are all taken. With dexterity, Takahashi grasps the next portion of sushi rice (shari) and slice of fish (neta) in exaggerated movements, cracking jokes in broken Cantonese mixed with English, eliciting laughs from the diners. The 40-year-old sushi chef has lived in Hong Kong for seven years. After graduating from high school, he trained for 15 years in Nihonbashi, Tokyo, before moving to Hong Kong, where he now manages an exclusive sushi restaurant in the city center.

He turns to a member of the wait staff: “Some tea for the waiting customers.” They provide tea and menus to the people seated in line outside the restaurant. The customers in the queue sip their tea and scrutinize the menu photos, enjoying a chat with those alongside. In Hong Kong, serving the waiting customers is almost unheard of, and is admired as “Japanese service.”

According to Takahashi, his years of training were harsh. When he began his apprenticeship in Tokyo, he was relegated to dish-washing, learning how to maintain the knives and chopping boards, and cleaning the floor. He almost never helped with the rice or fish. Although he wanted to learn sushi preparation, the mood in the kitchen made it hard to ask the head chef or his senpai (senior colleagues), and it took all his effort to avoid being a nuisance. When a senpai suddenly hit him, he was vexed, unsure if he was too slow or if his colleague was just bad-tempered. Despite this, he quietly observed what went on behind the counter, learning about fish sizes and seasonal variations and acquiring his slicing and filleting techniques.

The first time he was allowed to prepare sushi at the counter, he was totally engaged. Then, as soon as he was alone in the kitchen after closing, he collapsed for some time, sobbing with joy. But even after that, his battle continued. A former colleague with more experience returned to work, so Takahashi was again sidelined to menial chores. As he bided his time, cooking rice and fileting fish, waiting for the chance to make sushi again, Takahashi assured himself that he knew the head chef’s true intention, that he could make sushi faster than anyone, and that his dedication to the restaurant was second to none.

The turning point came unexpectedly. One day, the head chef called him over and introduced him to a valued customer. This was when Takahashi was 33. The customer hoped to open a restaurant in Hong Kong and was searching for a manager. Takahashi, who had only ever been overseas to Hawaii before, felt no connection or affinity with Hong Kong. However, when he considered his senpai—who had still not achieved independence, even in their fifties—he felt uneasy about his future.

He took the plunge. Seven years have passed since then, and the sushi chef is indisputably the master of his own domain today. Now Takahashi is training local staff in Hong Kong, and enjoys control over everything from the restaurant’s interior decor to its menu.

Mixing It Up with Japanese Flair in Singapore

Fujita Yōji (also a pseudonym), a 37-year-old bartender in Singapore, tells a similar story. After five years of work in a bar in Yokohama, he was still not allowed to mix cocktails in front of patrons. Afterhours, he would frantically practice cocktail preparation, even rehearsing at home with a shaker filled with rice. He entered a cocktail contest and won, but even then his boss would not acknowledge his abilities. Reflecting on his years of training, shaker in-hand, he says, “I often fretted about the situation I was in, but thinking back now, I actually understand my old boss’s mindset.” 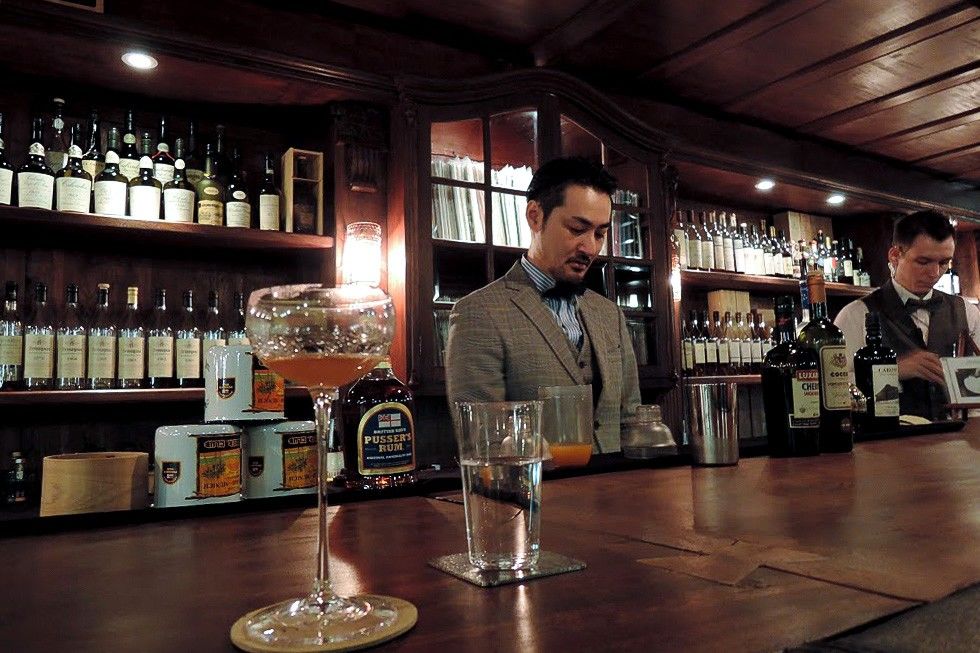 Inside Fujita’s cocktail bar in Singapore.

During this time, Fujita hit it off with a regular customer from Singapore. Building on this relationship, for the past five years, they have managed a bar together in the city’s business district. At three in the morning, over two hours after the last patron has settled the tab, Fujita stands alone in the quiet bar, brandishing a shaker. He then pours a cocktail into a glass on the bartop and hoists the glass to observe, like a scientist, the color and the bubbles, checking the fragrance and tasting just a little, to avoid intoxication. He has repeated this dozens of times. Although he has worked all day, his hair is still faultlessly slicked back, and his shirt is creaseless. His dark blue jacket and bow-tie are eye-catching. Fujita’s bar is known for more than just exquisite cocktails: it attracts a loyal clientele with its concerted chic, from the music, lighting, and furniture to the decor and even the bar’s aroma. According to Fujita, his establishment’s ambiance has gained popularity in Singapore due to its resemblance to the authentic cocktail bars of Yokohama and Ginza, a unique Japanese bar culture that he strives to maintain. He hopes to re-create his Yokohama boss’s bar in Singapore.

Hairstyling with a Personalized Approach in Bangkok

Kurosawa Hiroko (again, a pseudonym) is a hairstylist who followed a senpai and moved to Bangkok, joining a Japanese hair salon in a ritzy suburb three years ago. The 33-year-old stylist relaxes her Thai clients with light-hearted banter. When a repeat customer enters, she greets her by name, with a smile, like an old friend, “Good to see you again.” Before the customer has even sat down, she asks, “How did you like your last cut? Was it a bit too short?” Instead of first asking what style she wants now, she seeks feedback on the previous cut, encouraging her customer to voice any dissatisfaction.

Her communicativeness dispels customer concerns that she might cut off too much, or that they will upset her if they are too demanding. Her clients feel at ease to describe their ideal style. “And what about your kitten?” she asks. “Has it grown much?” she asks. Her memory contains tidbits about all of her customers’ lives: “What about that skin condition that was bothering you when I saw you last? Is it all better?”

The personal touch evident in Kurosawa’s questions spurs the conversation along, putting her clients at ease as they sense the warm care she has for them. This Japanese salon offers waiting customers digital tablets for their amusement, and also provides coffee and refresher towels (oshibori). Included after the haircut is a neck and arm massage—another aspect of the “Japanese service” that has gained popularity. Naturally, her salon has also gained a reputation for its highly polished cutting skills.

The personal care that Japanese salons give their clients is welcomed in cities across Asia as a distinctive brand of service. Kurosawa recalls the chats she has with clients thanks in part to her capacious memory, but also because she uses a salon client filing system developed in Japan. She asks first-time customers about their preferred styles, hair type, and allergies to chemicals, creating a record similar to a doctor’s patient file. Each haircut is recorded in the file, allowing the stylist to recall the detailed history of a client’s hair style changes better than the individual herself.

The Embrace of Japanese Services by Asia’s Middle Class

Asia’s global cities are seeing rapid growth of a middle class with money to spend on pleasures and pastimes. In increasing numbers, these people are seeking out a high standard of “Japanese service.” Many of Asia’s middle class are relatively wealthy consumers who often visit Japan, staying everywhere from city hotels to rural hot springs, and speaking a smattering of Japanese. These people do not admire Japanese service from afar—rather, it is something they have grown accustomed to since they were young. 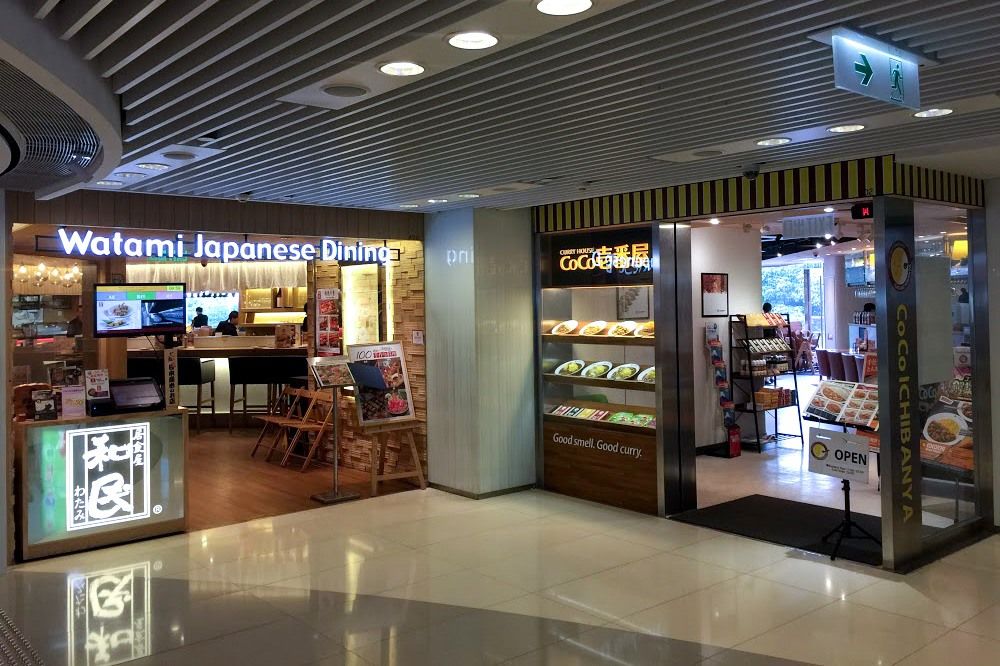 For example, the customer who employed Takahashi to manage the sushi restaurant had been an avid viewer of Japanese TV dramas as a child, and was enamored with pop idol Matsuda Seiko during university. These Japan connections led him to start eating the sushi and tempura that he came to love. People who have grown up with Japanese culture are also familiar with the food. A sushi restaurant where you can enjoy authentic Japanese service becomes the talk of the town, and when people share their experiences on social media, word spreads rapidly. People’s awareness of refined Japanese service and skills increases day-by-day. 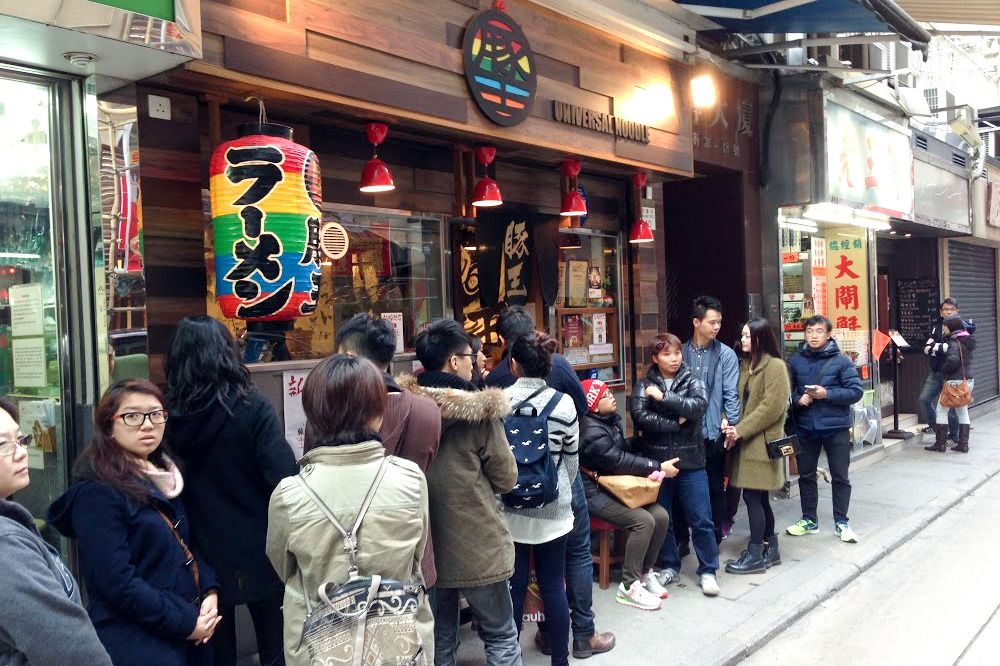 A long queue for a Hong Kong ramen restaurant: Japan’s ramen is popular even in China, birthplace of the noodles.

The three people in this article have found satisfaction in working abroad. In Japan, an aging workplace robbed them of opportunities for communication with customers, or they felt exhausted by the excessive competition in the already-mature service industry. But in Asia’s global cities, they were blessed with opportunities to display their skills in front of customers, and the Japanese-style service that they brought allowed them to differentiate themselves from the local competition.

Their day-to-day work has not changed significantly by moving abroad. A sushi chef must still sharpen knives, clean chopping boards, and slice fish. A bartender must still squeeze lemons, crush ice, and polish glasses. A hair stylist still prepares scissors, polishes mirrors, and sweeps the floor. Such tasks are monotonous and often hidden from the sight of customers seeking Japanese service, but each of these actions is a component in the delivery of omotenashi—Japan’s vaunted commitment to heartfelt service.

Japanese service workers in traditional, customer-oriented sectors often express a strong sense of duty to their mentors and profession. They feel compelled to share that spirit of craftsmanship with others, even more so when they set up shop abroad, where they are naturally seen by the local population as representing Japan. Skills are not something that a person creates alone from scratch; they are built on the accumulated efforts of pioneers. The migrant Japanese craftsmen view themselves as stewards of a long-standing tradition and take pride in sharing it locally in Asia.