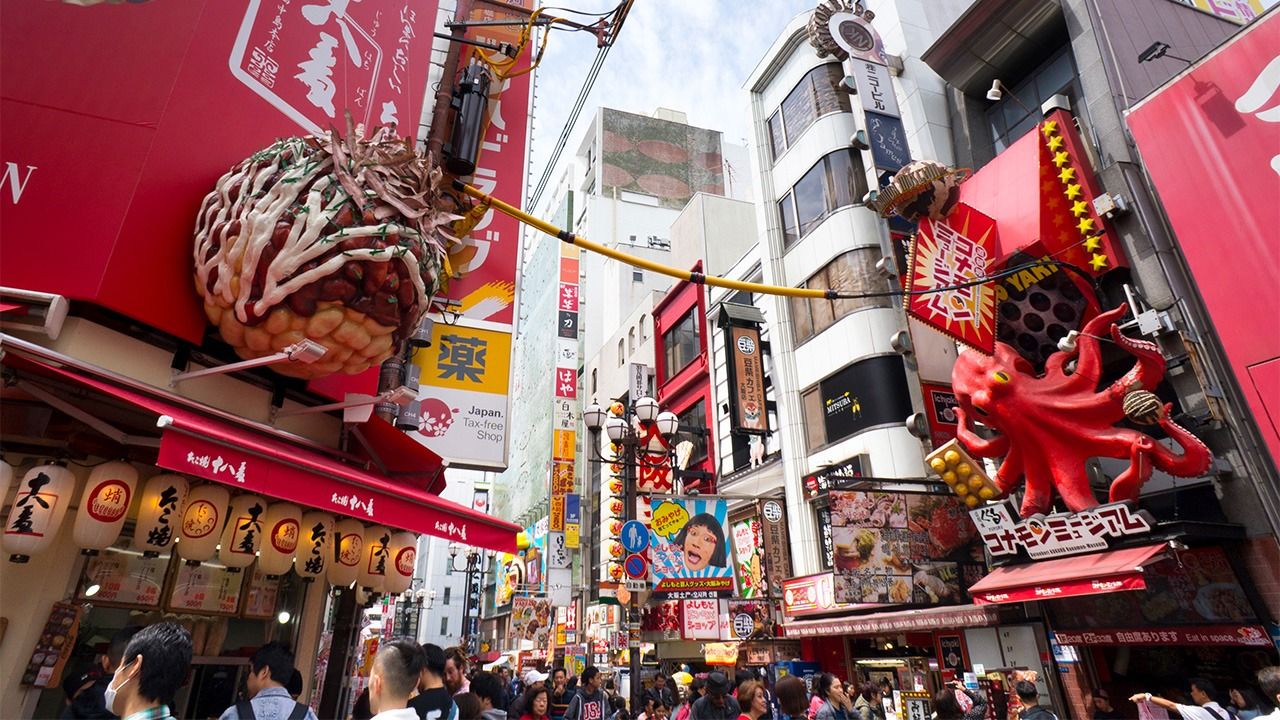 Culture Society Guide to Japan Jun 17, 2019
A longtime Osaka local takes us on a tour to experience the unique character of Osaka Minami, the retail district and markets that mesmerize tourists.

Recently, on one of my regular radio gigs, we talked about why Osaka, especially its Minami district, is so popular with overseas visitors, and Chinese in particular. What makes Osaka so interesting and where do visitors gravitate? I asked two Chinese friends: one first moved to Japan with his parents in the 1980s, studied in Kobe, and now does business in Osaka and Shanghai; the other has operated a website for Chinese visitors to Osaka since the 1990s.

Their answer was simple: Minami, in particular, Dōtonbori and Kuromon Ichiba (the Kuromon market). The streets here are packed with eateries and other tiny shops. It’s the open-air atmosphere of these businesses that is so appealing.

One point they mentioned stood out in particular. Over the past 20 years, China’s major cities have undergone rapid modernization, with an increase in giant shopping malls and food courts housed in high-rise buildings. For Chinese consumers who have grown accustomed to such large-scale retail facilities, the casual atmosphere of Osaka’s commercial districts and its markets are a refreshing change. For those aged in their fifties or older who grew up in the metropolis of Shanghai in particular, shops where you can poke your nose in to browse or snack are a trip down memory lane. 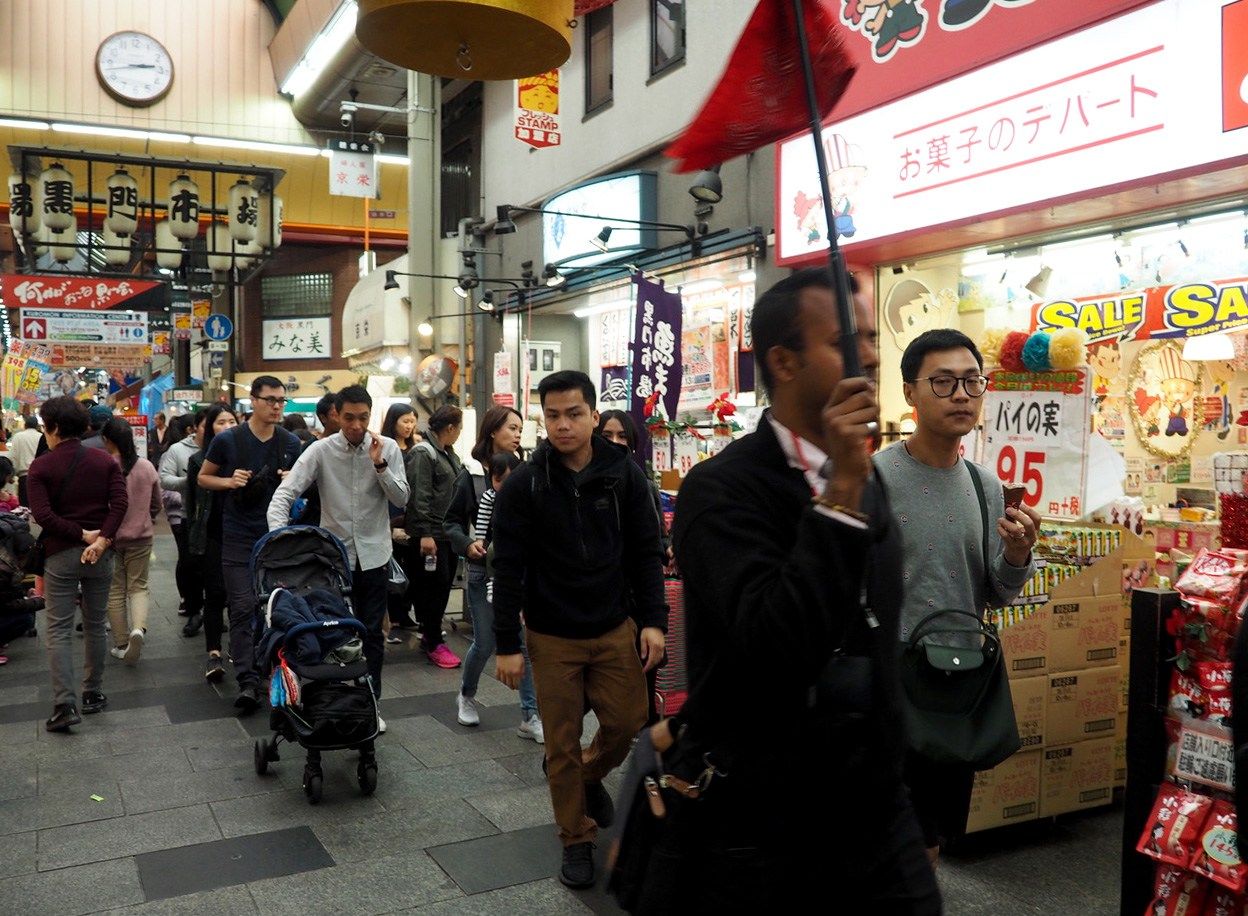 Downtown Shanghai has undergone radical transformation. Until around a decade ago, it was renowned for eateries serving noodle soup, rice porridge, and baozi or other dumplings. Development, though, has replaced the ramshackle streetscape with immaculate high-rise buildings.

A District is Well-Suited to Ambling

People often comment that the commercial districts make Osaka what it is.

Yet it’s hard to describe one “typical” Osaka shopping street. The districts include Shinsaibashi-suji, lined with department stores and fashion houses; the Dōtonbori canal district, home to the famed Kuidaore Tarō mannequin and decorated with giant billboards for crab, puffer fish, and octopus restaurants; and Nanba’s Sennichi Mae, a street of cooking utensil vendors, selling pots, knives, and everything you would need to open your own takoyaki stall, right down to lanterns and banners.

The Kuromon market, popular with Chinese tourists, is packed with fishmongers. In the past, it catered exclusively to local chefs from establishments both grand and humble. 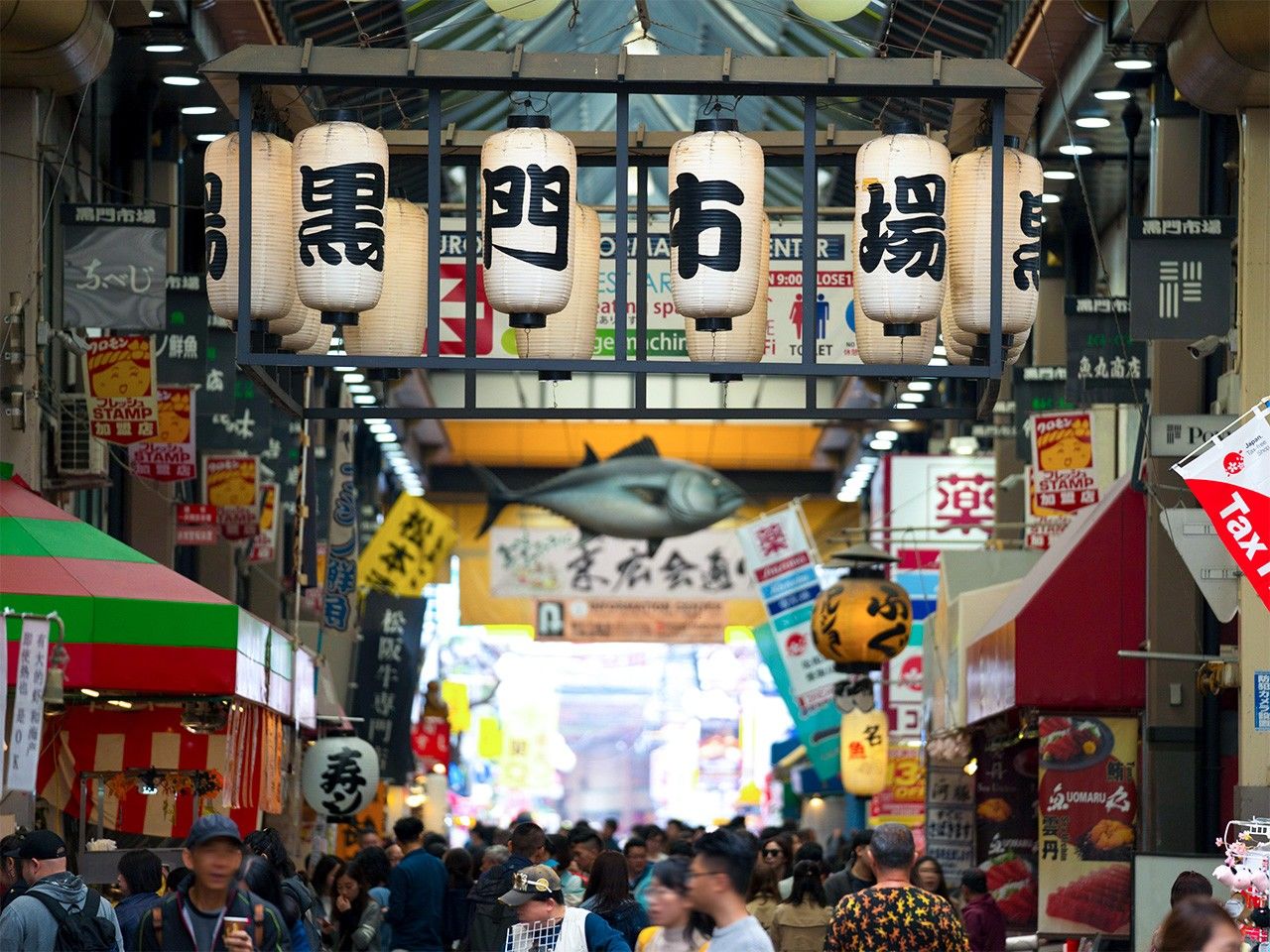 The Kuromon market, with some 170 shops, styles itself as “The Greatest Kitchen on Earth.” (© Kuroiwa Masakazu)

The market’s layout has no rhyme or reason. A vendor specializing in tuna sits alongside a diner. Just down the street, a fruit and cakes shop is next door to a processed meat butcher. The shopping experience here is nothing like the clearly defined aisles of a supermarket.

The Chinese tourists who come here are often looking for seafood, particularly tuna, prawns, and shellfish. China’s wealthy elite are gourmands, and within their circles, word spreads with astonishing speed. They all know they can readily enjoy tuna belly sushi, grilled shrimp on skewers, or even puffer fish hot pot at Kuromon. Not only is the food cheaper and tastier than that available in the brightly lit Kita Shinchi or Higashi Shinsaibashi areas, because Kuromon is a market where even the restaurants come to source their ingredients, it also tends to be fresher. These visitors are savvy travelers when it comes to value for money. 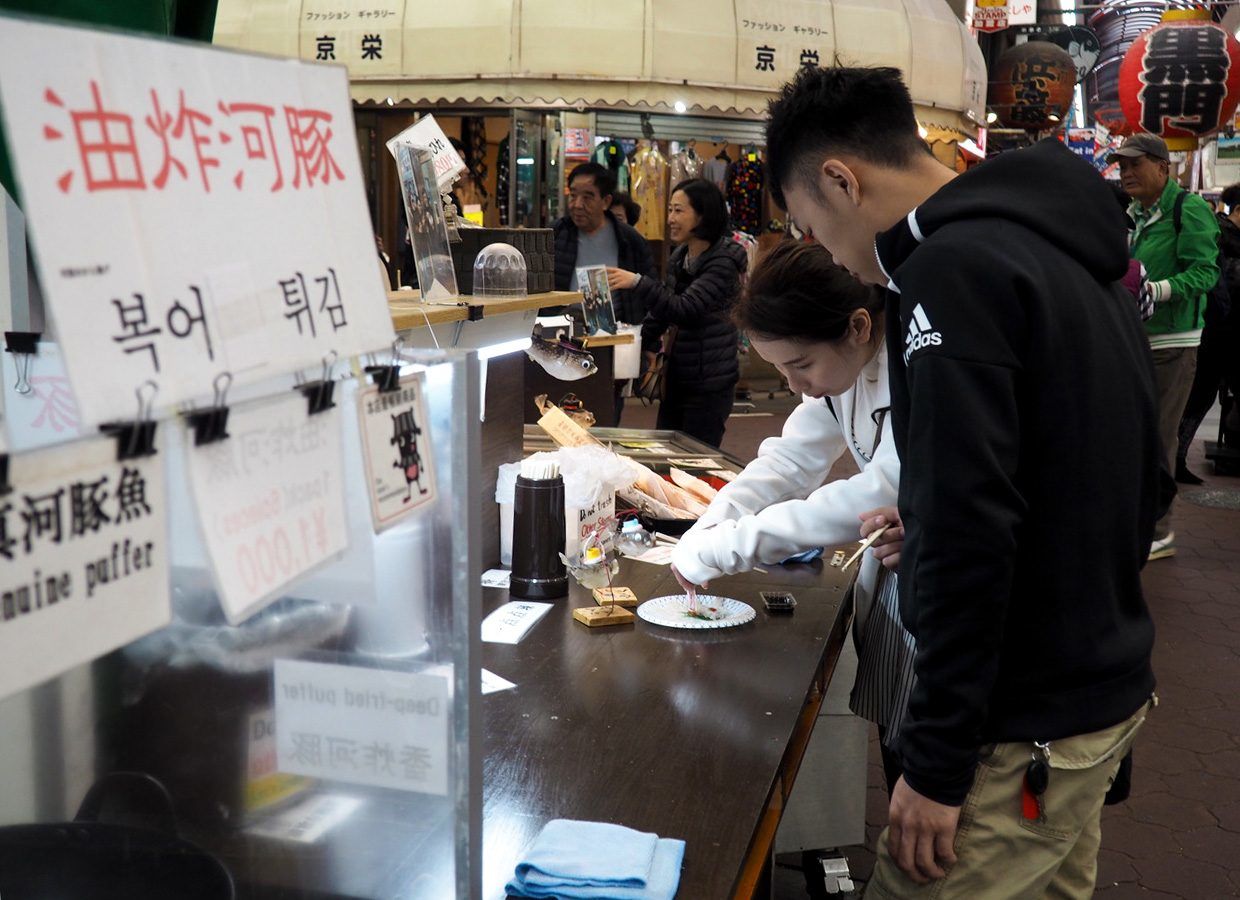 Professional chefs from all kinds of restaurants come here to get their fugu from Minami, a long-established shop that now serves hot pot outside, with customers seated on camp stools at a folding table. I’ve been coming here for 30 years, during which I have become friends with the owner. One day he suggested, in true Osaka style, that I try the soup stock. Apparently, some 10 years ago, Chinese tourists started asking to eat fugu on the spot, and the shop saw it as an opportunity. Today the fish is served with the conventional ponzu (soy and citrus sauce), the standard Japanese style, as well as in the store’s original Chinese-style soup. 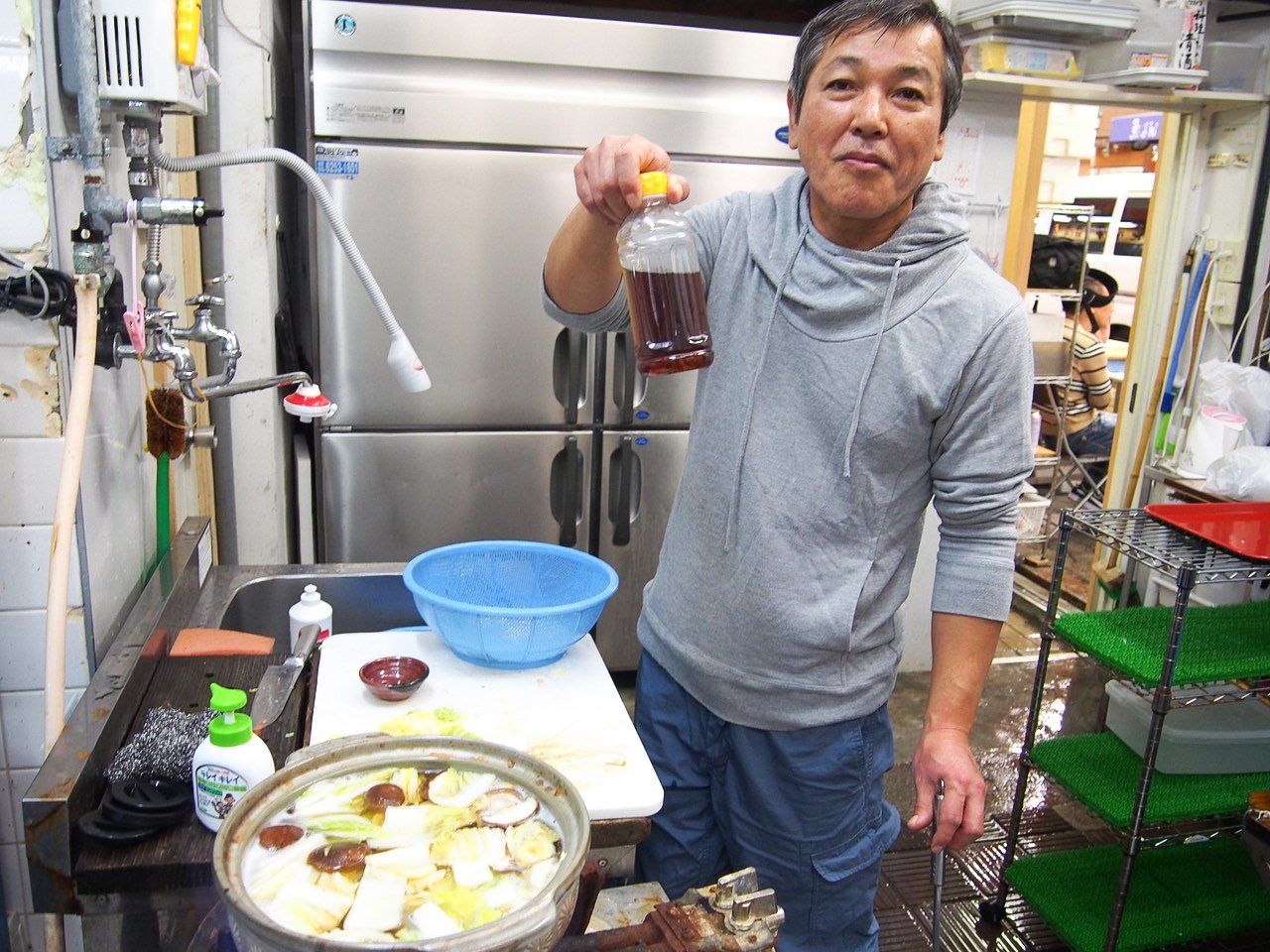 The fugu store Minami has tailored a soup dish to the tastes of Chinese tourists. Japanese generally dip thin slices of fugu in boiling water and dip it into ponzu. For its Chinese customers, who are unaccustomed to this taste, the shop developed a dashi stock to match the fish. For an established restaurant to experiment like this is quintessentially Osakan. (© Kō Hiroki)

Elsewhere in Kuromon, a tuna vendor serves sushi to customers seated on benches, and shrimp and shellfish shops cook their produce in the open to lure tourists.

For many years, specialty chefs from renowned restaurants have come to this market for their produce, but now, they are joined by wealthy Chinese tourists who savor the wares on the spot, creating an almost surreal scene. This epitomizes the “anything goes” nature of Osaka Minami. The adaptability and service-mindedness of merchants born and bred in Minami’s markets reveal the true nature of Osaka.

The pleasure of the Kuromon market and Osaka’s other retail districts is best experienced through a leisurely stroll. Each street and area has its own flavor and unique local character.

For a local like me, visiting favorite shops offers a pleasure akin to dropping in on old friends. For overseas visitors, it is more like an amusement park—but one with no admission charge, offering incomparable wonder and discovery.

Osaka locals have a distinctive manner of communicating. Whether selling food or other wares, merchants greet you with a “Welcome back” before they start bragging about their goods. Taxi drivers will update you on the weather and the local baseball team, the Hanshin Tigers. The moment you take a seat at a restaurant counter, they will ask where you have been and recommend dishes to you.

Kappō-style restaurants, where you sit facing the chef, wedged between other patrons, are another Osakan institution. They generally do not have menus listing dishes and prices; instead, the staff tell you what is on offer that day.

We are so used to supermarkets, with food stacked neatly and labeled: steak for stew or sirloin at x yen for y grams. You compare the prices, pop it in your basket, then proceed to checkout to scan the barcodes and pay. Minami is completely different.

Most retail areas in Osaka feature a fresh food market with shops in the adjacent street selling general household goods. If you visit the dried fish vendor, their preserved barracuda might catch your eye. “How should I cook it?,” you ask. “You can toast it, but if you don’t like the odor, fry it at medium-heat for 10 minutes.” Such interaction is the norm.

Sometimes they give you a little extra. Offer to pay for it, though, and the reply is iran koto—“Don’t sweat it.” This is Osaka.

Quintessential Osakan communication is more than just different intonation or slang: it is the style of interaction between a merchant and the customer, cultivated through years of doing business on the streets. In Osaka, humor always takes precedence. But this is not the slapstick of the city’s Yoshimoto comedy conglomerate—rather, it is the manner of interaction with others, along with perception and expression.

Osaka is undeniably a metropolis. Cities provide a cover where you can retain anonymity, ambling about like a traveler, shopping or eating, browsing the stores and going with the flow.

Osaka Minami, though, is more personable: The merchant and customer are known to one another, and share a local cognizance as members of a community.

Naturally, I believe that being able to exercise both anonymity and familiarity is a prerequisite for enjoying city life. The way that people in a city behave and relate to one another can be radically different depending on whether they think there is a limit to the number of fellow city-dwellers with whom they can have personal relations, or that the city population offers infinite possibilities.

The people who call Osaka home, though, hold the basic belief that everyone is a neighbor, everyone is good-at-heart, and everyone is funny. Even tourists with no Japanese can sense something of this. There is a common vibe to the urban centers of the world’s great cities, like Paris or Istanbul. The perception of this human warmth cannot be expressed in data, but, we Osakans can smell it. 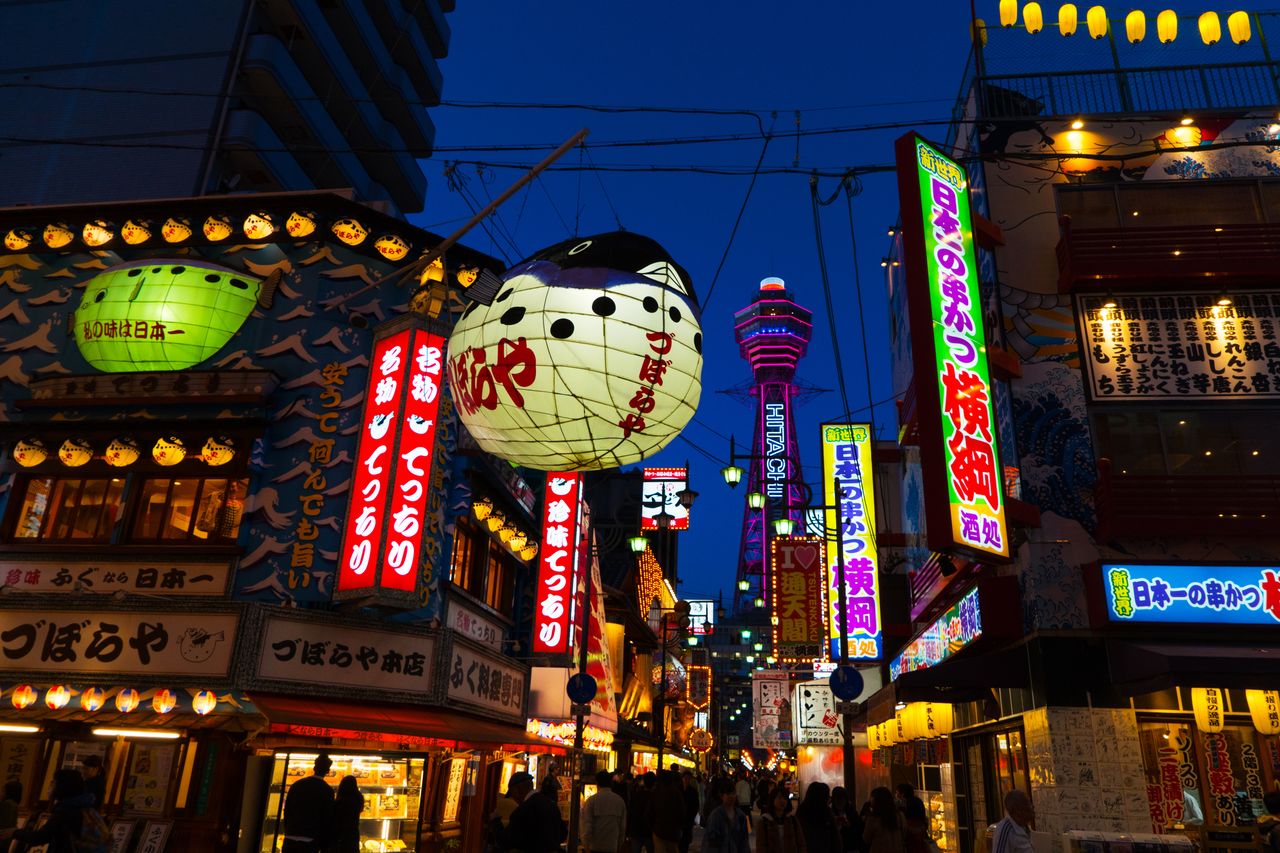