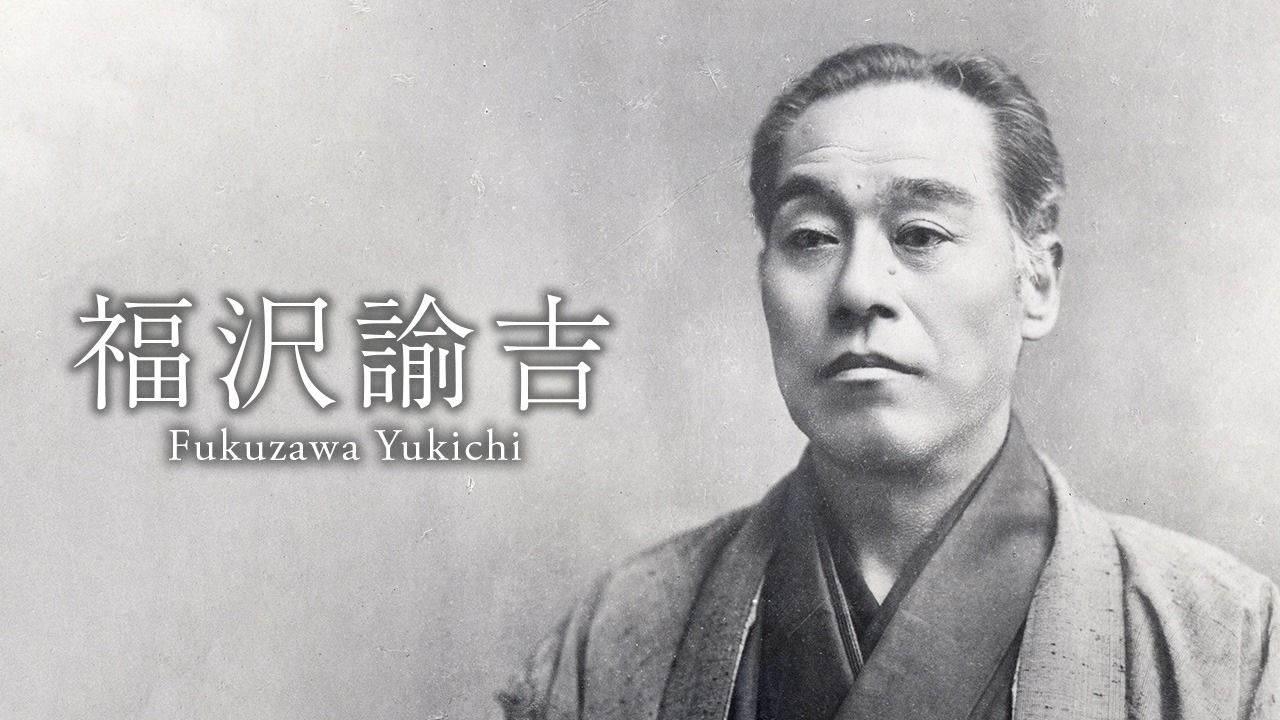 Culture History Sep 4, 2019
Educator and entrepreneur Fukuzawa Yukichi was a highly influential figure in nineteenth-century Japan. He wrote many popular works, including An Encouragement of Learning, and founded Keiō University and the Jiji Shinpō newspaper.

Japan traveled a rapid path to modernization following the Meiji Restoration of 1868. Having taken firm control of the country, the new government established public and private schools to foster talent and did everything possible to develop a range of industries to generate profits from trade. This capital was then reinvested into achieving a transition from a largely agrarian society to one driven by light and then heavy industry.

The country’s success in modernizing its economy spurred similar moves in Siam (now Thailand) in the late nineteenth century, while Chinese scholars at the turn of the century like Kang Youwei and Liang Qichao studied Japanese policies when planning reform in their homeland. One can also see the influence of Meiji ideas in later twentieth-century movements like Chiang Ching-kuo’s 10 Major Construction Projects, democratization in Taiwan, Roh Tae-woo’s declaration of democratic reforms in South Korea, Deng Xiaoping’s Four Modernizations in China, and the Doi Moi economic reforms pushed by Truong Chinh and others in Vietnam. Leaving aside the many negative aspects of that history, it is important to recognize the great philosophical impact Japan’s modernization policies had in Asia.

One of the thinkers behind Japan’s grand design was Fukuzawa Yukichi (1835–1901). What was the background for his intellectual development? It would be difficult to answer this question without touching on his experiences with Western culture.

Fukuzawa was born in 1835 as the second son of a low-ranking samurai who worked at an Osaka warehouse owned by the Nakatsu domain (now Ōita Prefecture). As a child, he received a Confucian education in Nakatsu. Through most of the Edo period (1603–1868), Western culture entered Japan via the Dutch trading settlement in Nagasaki, and in 1854 Fukuzawa traveled to the southern port city to take his first steps in rangaku (Dutch studies). The following year, he furthered his studies at the Tekijuku school in Osaka, run by Ogata Kōan, a physician of Western medicine.

In 1858, he started a new domain school for rangaku in Edo, which later became Keiō University. He also set himself to the task of mastering English, and in 1860, he traveled to San Francisco on the Kanrinmaru steamship as part of a diplomatic mission. On his return, he was reassigned to a job working as a translator for the shogunate. Then in 1862, he traveled on the First Japanese Embassy to Europe, visiting Britain, France, the Netherlands, Prussia, Russia, and Portugal. His observations on this trip formed the basis for his 1866 publication Seiyō jijō (Conditions in the West), which discussed the political and economic systems of the countries he saw. In 1867, he went to the United States again, stopping in Washington DC and New York.

Fukuzawa saw six factors as necessary for achieving civilization in both Japan and other Asian countries, as detailed in the opening to the first edition of Seiyō jijō. These were respect for individual freedom through laws that did not restrict citizens, freedom of religion, encouragement of scientific and technological progress, a robust education system, stable politics based on just laws that foster industry, and a constant concern for how to improve the welfare of citizens.

Fukuzawa’s thinking as an educator and an entrepreneur coalesced in his classic 1872 work Gakumon no susume (An Encouragement of Learning). The main topic of the book is the need for all citizens to engage in practical study related to everyday needs, so as to ensure independence for individuals, families, and the state. In the text Fukuzawa also underscores the value of an enlightened society consisting of well-educated people and reiterates the respect for freedom, application of science and technology, and government protection of ordinary citizens as prerequisites for civilization that he advocated in his earlier work.

Fukuzawa in the opening statement of An Encouragement of Learning declares that “it is said that heaven does not create one person above or below another.” The line, which became famous in postwar Japan, is generally considered to have been inspired by the US Declaration of Independence (1776). However, I believe that Fukuzawa looked to the life and philosophy of Benjamin Franklin (1706—1790), one of the men who drafted the historic document, as his exemplar.

Franklin was a scientist, a newspaper owner, and the founder of social clubs, academic societies, and the University of Pennsylvania. He was also a politician. Although Fukuzawa’s political career consisted of just one year in the Tokyo Prefectural Assembly from 1879, he headed the Jiji Shinpō newspaper company and the Kōjunsha social club, was a member of the Meirokusha intellectual society, led the Tokyo Academy, and founded Keiō University. The resemblance to Franklin’s career seems to indicate a strong influence.

Fukuzawa worked for the shogunate until 1868, but after the Meiji Restoration, he operated mainly as a private citizen. His various editions of An Encouragement of Learning, influenced by Franklin’s Poor Richard's Almanack, became bestsellers, just as Seiyō jijō had previously. In his 1875 work Bunmeiron no gairyaku (An Outline of a Theory of Civilization), he exhorted Japan to Westernize. From 1881, he supported the independence movement in Korea, and in 1885 he gave shelter to reformists like Kim Ok-gyun and Pak Yung-hio, who fled to exile in Japan after a failed coup.

Fukuzawa and the Meiji Government

In the Meiji Restoration, a group led by the domains of Chōshū and Satsuma (now Yamaguchi and Kagoshima Prefectures) overturned the Tokugawa shogunate and established a new government. At first, Fukuzawa felt misgivings about the central role of Chōshū, which had advocated the expulsion of foreigners. Yet, when he saw the new government continuing the engagement and Westernization policies of the former shogunate, he did not stint on offering support from outside. He was particularly close to Ōkuma Shigenobu of the Saga domain, an advocate of modernizing Japan along British lines, as well as politician Inoue Kaoru and Iwakura Tomomi, who played an important role in laying out the country’s new rail network.

As a former retainer of the shogunate, Fukuzawa was one of those who lost out when the Meiji government took over. His six targets for civilization had been gradually introduced by government members favorable to a British- or American-style system. But when Ōkubo Toshimichi of Satsuma, who backed the Prussian model of modernization, took control in 1873, Fukuzawa’s concepts came under increasing pressure. While Fukuzawa stressed the importance of free economic enterprise, Ōkubo championed top-down modernization managed by the state. Until Ōkubo’s assassination in 1878 by supporters of the failed Satsuma Rebellion, Fukuzawa, despite his fears of suppression, expressed resistance as much as possible in works like his 1877 Bunkenron (The Division of Power).

After Ōkubo’s death, power returned to Fukuzawa’s close friend Ōkuma. For the next three years, Fukuzawa wrote a series of works supporting Ōkuma and helped produce a draft constitution through Kōjunsha. In 1881, however, Ōkuma was forced from government along with many officials who were Keiō University graduates, and Fukuzawa’s campaigning for British-style modernization came to nothing. Itō Hirobumi of Chōshū rose to lead Japan and continued on Ōkubo’s path, tightening government control of politics, economics, and education.

Fukuzawa’s Keiō University produced many talented scholars, and in his newspaper Jiji Shinpō he wrote editorials on a broad range of topics like politics, current affairs, social problems, and the position of women. From 1882, when he founded Jiji Shinpō, he had complex feelings about Japanese development. For Itō, who was now in power, the country’s independence was a major issue. Fukuzawa agreed on this point, but Itō did not place as much importance on establishing personal liberty as his political rival did. Knowing this, Fukuzawa worried about the fragility of a state that did not guarantee individual freedom.

With the promulgation of the Constitution of the Empire of Japan in 1889, the Prussian model for the state was complete. The education system also set government schools above private institutions. Victory in the Sino-Japanese War of 1894–95 provided some relief on the question of national independence, but Fukuzawa harbored misgivings about the growing dependence of citizens on the state. Perhaps that is why his works after the war, Fukuō hyakuwa (One Hundred Discourses of Fukuzawa) in 1897 and Fukuō jiden (The Autobiography of Yukichi Fukuzawa) in 1899, are concerned with personal independence.

Fukuzawa died of a stroke in 1901 at the age of 66. He was born 33 years before and passed away 33 years after the Meiji Restoration, which stood at the center of his life in an age of turbulence.

(Originally published in Japanese. Banner image: A portrait of Fukuzawa Yukichi in 1891 that was used as the basis for his image on the ¥0,000 bill. Courtesy Fukuzawa Memorial Center for Modern Japanese Studies, Keiō University.)