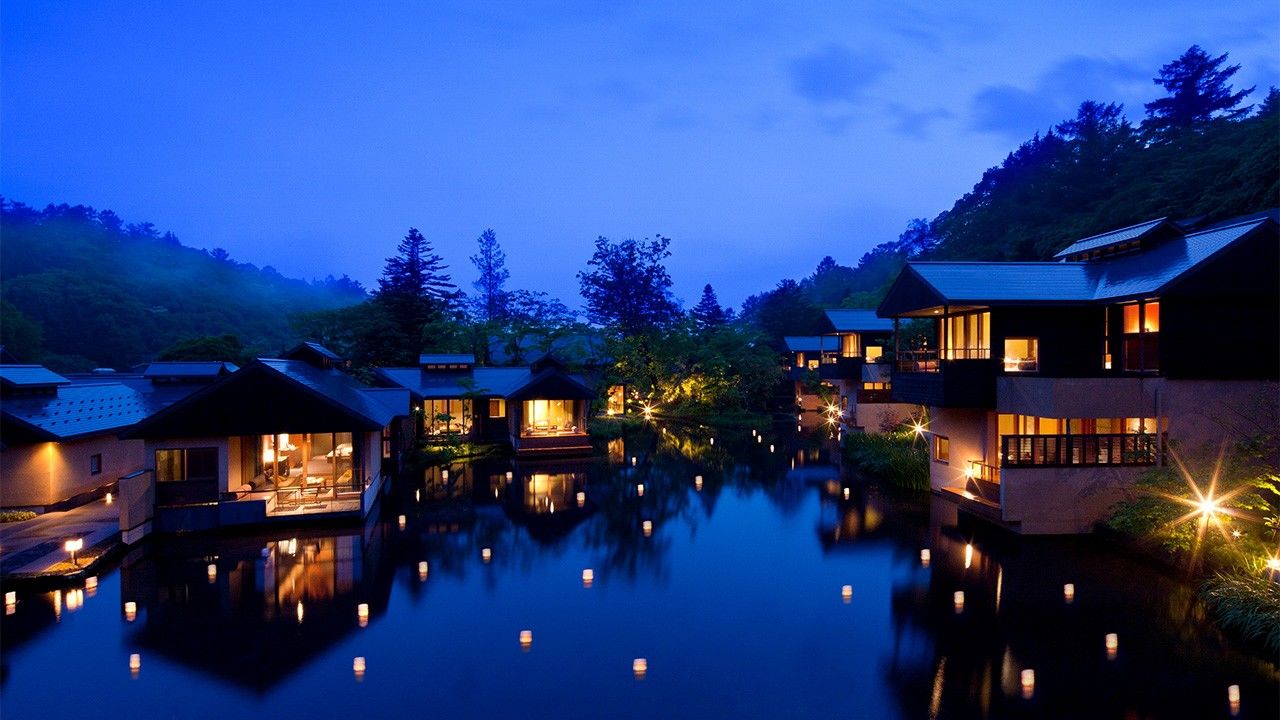 Japan’s Traditional Inns Innovate to Thrive in a Declining Market

Culture Guide to Japan Travel Oct 4, 2019
Thanks to changing market tastes, the number of ryokan, traditional Japanese inns, is decreasing year-on-year. At the same time, high-end inns that have fashioned entirely new lodging concepts are gaining market share. What does the new wave of Japanese-style lodging have to offer?

Tradition with a Hint of the Modern

There is a rare species in the world of accommodation that clearly distinguishes itself from the globally ubiquitous hotel template. It has deep roots in its local culture and lifestyle, and even its own industry association. Welcome to the world of the Japanese ryokan.

So what exactly is a ryokan? Essentially, it is a lodging place that adopts the style of a traditional Japanese residence. Guest rooms have tatami mat flooring, and are used not only for sleeping, but also for relaxation and meals. Rooms are not divided into dining and sleeping areas, but rearranged to suit different purposes at different times. Ryokan adopt the style of traditional Japanese homes, and allow guests to experience them away from home, too.

This description, however, no longer applies to more modern iterations of the classic inn. Behind the evolution of ryokan lie the changing lifestyles of Japanese people. In urban areas in particular, people now eat seated on chairs at a dining table and sleep in beds raised off the floor, so a ryokan stay is removed from their everyday lives. As a result, inns are starting to put beds in their otherwise Japanese-style tatami rooms and serve meals in shared areas instead of individual rooms.

While some ryokan are evolving, those that continue to maintain their distinctive features are often tourist-oriented inns in travel destinations. Their urban counterparts that once catered to business travelers, on the other hand, started being pushed out of their market by reasonably priced “business hotels” as far back as the 1970s. Back in the day, Japanese business travelers would share rooms with their bosses and workmates and drink and play mah-jongg into the night, but lifestyles evolved and people began to demand privacy. As a consequence, hotels with single rooms became a standard offer.

The Ryokan Brand of Omotenashi

Another concept that sets a ryokan apart from a hotel is its approach to privacy. Hotels put a premium on guests’ privacy by doing their best to meet needs as and when requested, whereas ryokan try to anticipate guests’ needs and offer the most appropriate service––as they assess it. At its core, an inn assumes that a night’s lodging, with a set menu of Japanese cuisine for breakfast and dinner included, is the best omotenashi—the quintessentially Japanese take on hospitality—it can offer.

The hotel-ryokan divide is also evident when comparing the roles of a hotel  room attendant and the nakai (attendant) at a ryokan. A room attendant in a Western style hotel will only enter a guest’s chambers when summoned, but the nakai will come and go as tasks arise that need doing—refilling the tea supplies in the room or laying out the futons while the guests are enjoying dinner—request or no request. The distinction between the two categories is found not so much in the facilities, but the service—a difference that is symbolized by the way a “do not disturb” door sign in a hotel can create a private space for guests where service is not expected.

Revisions to the Inns and Hotels Act in 2018 are also a significant indicator that the difference does not lie in the realm of tangibles. Previously, the two formats were clearly distinguished in law: Establishments with Western-style furnishings were defined as hotels, while all other accommodations were classified as ryokan. Under the revised law, that distinction was eliminated, leaving the definition of a ryokan far less clear.

The number of ryokan is also continuing its downward trend. As urban ryokan once morphed into business hotels, now even tourist areas are turning their backs on the old-style inn.

Novelty as a New Source of Appeal

All is not lost for the ryokan, however. Inns that pick up on contemporary needs and craft their own alluring concepts and unique stay experiences are outranking their hotel competition these days. This trend is especially obvious with luxury ryokan located in tourist destinations.

Wasure no Sato Gajoen in Kagoshima found success with its early identification of the appeal of rural life to city-dwellers. Its guests lap up the luxury of being served fresh, locally sourced regional cuisine in farmhouse-style, thatched roof villas with their own hot-spring-fed rock baths. And then there is Hoshino Yoshiharu, the head of Hoshino Resorts and fifth-generation member of a venerable Nagano ryokan family. His surname is best associated with the resort hotel brand, but the ryokan-style Kai hot spring resorts and Hoshinoya Japanese-style resorts are also vital parts of his business.

Hoshino is often heard saying: “Japanese cars are found on roads the world over, and sushi is a global food phenomenon, so why not export Japanese ryokan?”

He is sounding the alarm at the failure of ryokan to adapt despite the obvious change in people’s lifestyles. He sees them as “Japanese culture theme parks” and is eager to help them evolve. At Hoshino Resorts, the in-room meal is, in principle, a thing of the past. Even the ironclad “room with two meals” rule of the ryokan industry has been relaxed to allow the separation of dining serviecs from lodging.

Tajima Tateo, founder of Wasure no Sato Gajoen, on the other hand, believes that the food and lodging package is at the heart of the ryokan concept. Other ryokan also insist on retention of the in-room dining concept. Asaba—a premium hot spring ryokan in Shuzenji on the Izu Peninsula and member of the elite French independent hotel chain Relais & Châteaux—is one of them. Its owner, Asaba Kazuhide, is a cosmopolitan hotelier who has stayed at hotels around the world. Asaba has been accepting international guests from well before the inbound tourism boom of recent years. But it also remains faithful to the core ryokan traits; meals are served in tatami-covered guest rooms, where futons are later laid out for guests to sleep on. However, the Asaba inn also ensures the ultimate in comfort by providing a mattress and two pillows that guarantee a sleep as sound as any on offer in a luxury hotel. 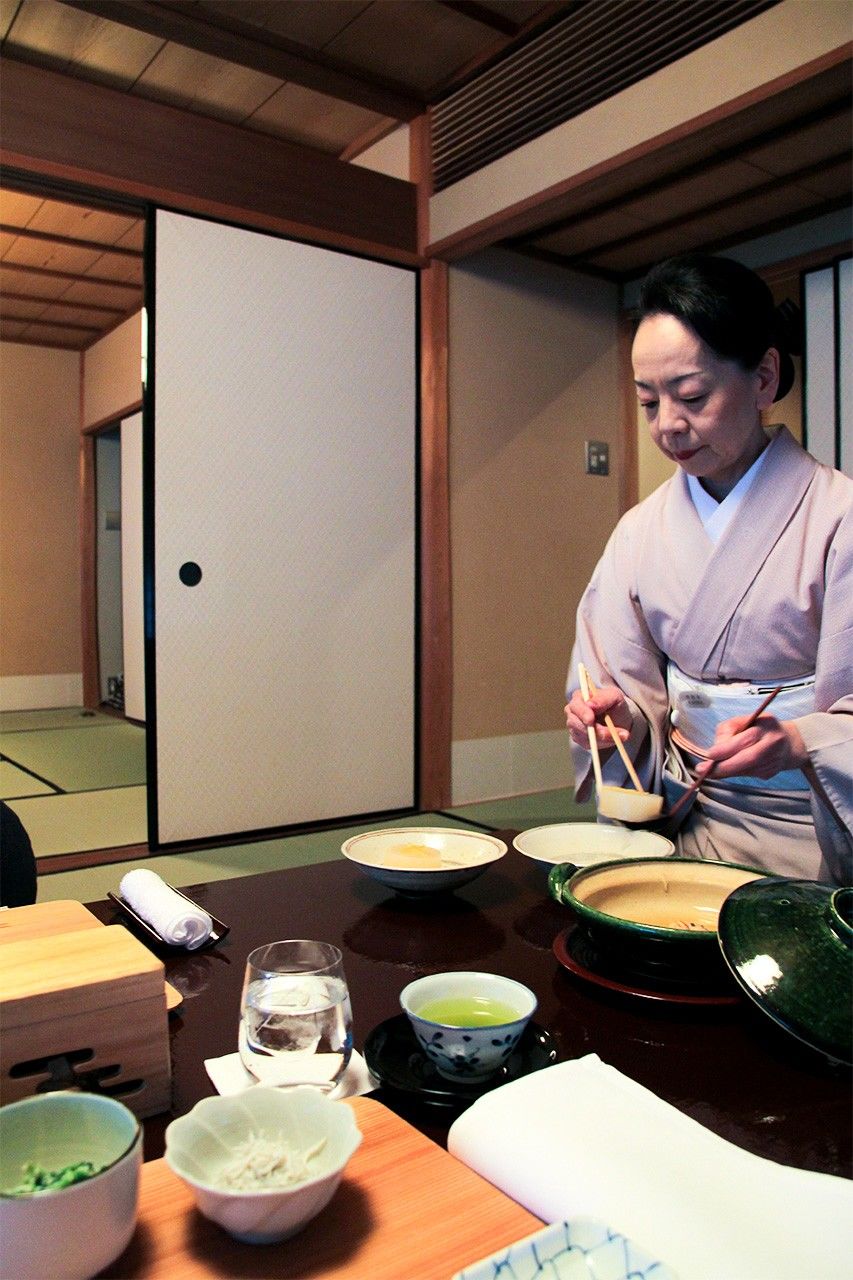 An in-room meal at Asaba ryokan.

The Ryokan Goes to America

As Japan experiences the dual trends of changing lifestyles and increasing inbound tourism, not to mention legislative changes impacting the lodging industry, the precise definition of a ryokan has become more slippery by the day. The world’s interest in Japanese culture, however, has only continued to spread. In this environment, the ryokan as a “Japanese culture theme park” must surely have huge potential. I sensed the promise of this approach quite palpably on a visit to Nobu Ryokan Malibu in Malibu, California. 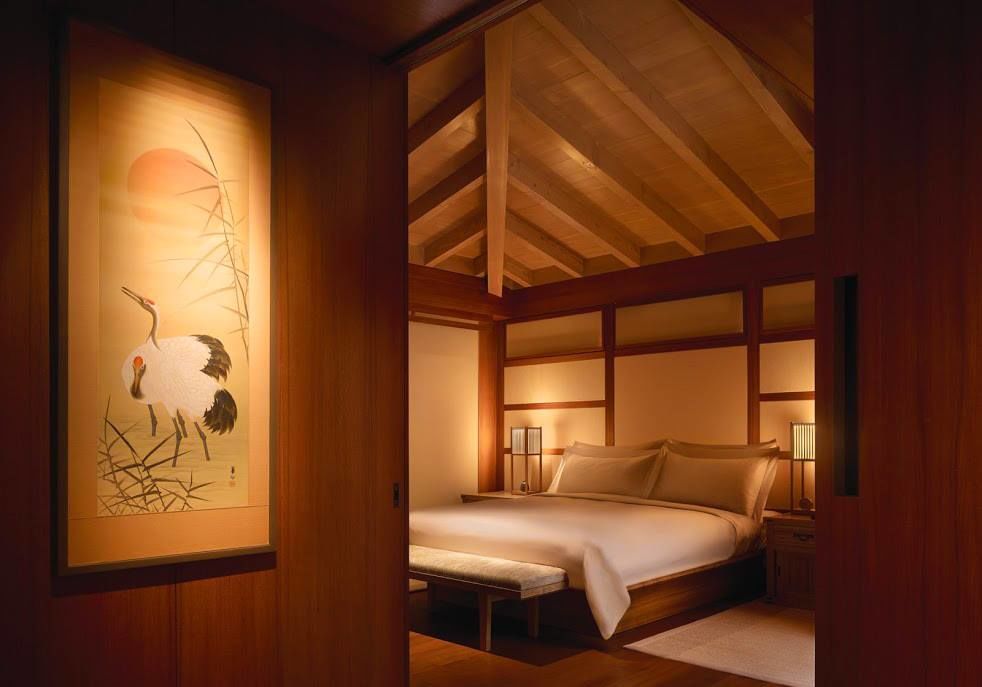 A suite at Nobu Ryokan Malibu.

Matsuhisa Nobuyuki is the Japanese-born and -trained sushi chef who made it big in the United States, partnering with the actor Robert De Niro to launch the Nobu chain of innovative Japanese-style restaurants. Better known in the United States than Japan, Nobu restaurants are popular haunts for celebrities. The Nobu brand also has its own hotel chain, and one ultra-high-end property among them in fact bears the name ryokan.

The Nobu brand has been a huge hit, playing a part in the sushi boom that has since swept the world. In a similar vein, the brand has managed to fuse Californian and Japanese taste in its very stylish inn in Malibu. The American-Japanese hybrid offers rooms with a king-size bed and stay plans both with or without meals. The latter can be taken in the adjacent restaurant or in guest rooms. The cuisine on offer is, of course, Japanese.

Although Nobu Ryokan Malibu sets back guests by more than $2,000 per night, it remains popular with Hollywood celebrities and wealthy Californians, and seems to provide proof that the ryokan concept has worldwide appeal.