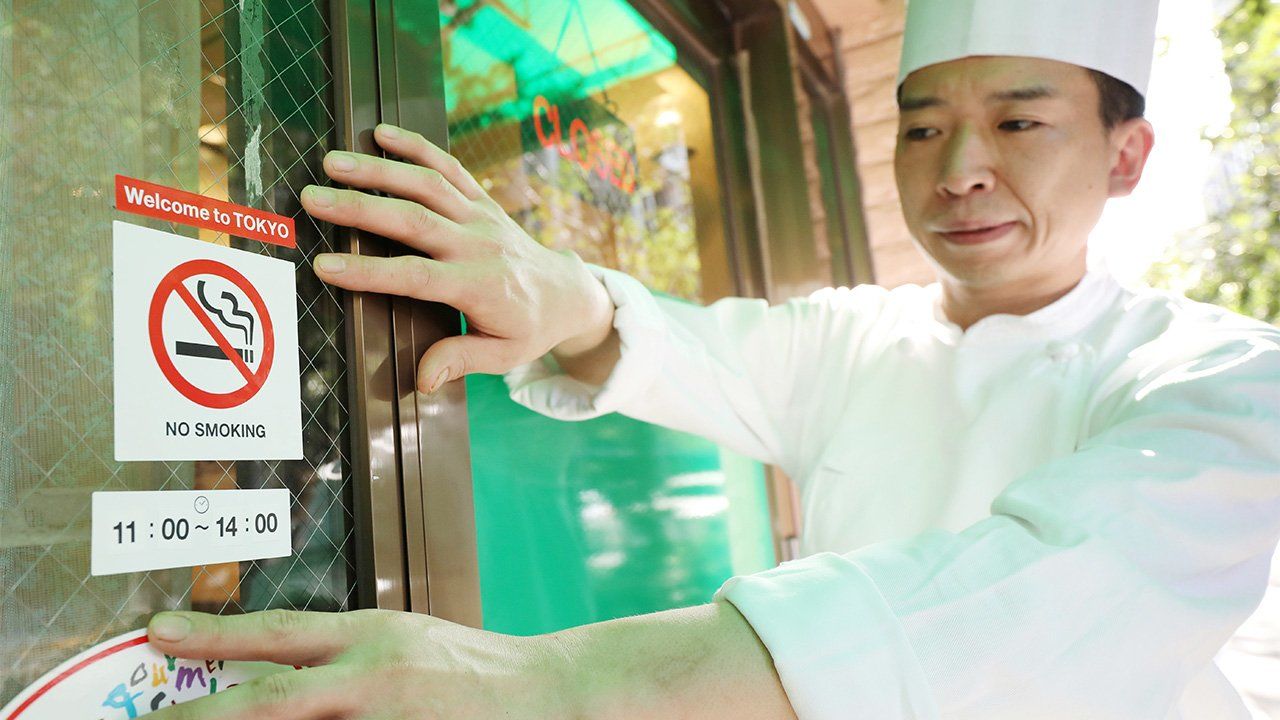 Health Dec 9, 2019
Antitobacco campaigners’ hopes were dashed when national legislation to combat passive smoking was watered down. At the local level, though, governments and activists are seeing more success in banning smoking in public spaces and keeping Japan’s air cleaner for all its residents.

In July 2018, Japan approved its first national smoking ban inside public facilities as part of legislation designed to reduce the proven health risks of passive smoking. In the run up to the Tokyo 2020 Olympic and Paralympic Games, amid international calls for a smoke-free Games, it was hoped that the legislation calling for strict antismoking measures would lead to a significant improvement in public health and also lift Japan from its dismal international ranking as a country with one of the most backward tobacco control policies.

This did not happen. To the great disappointment of the antismoking lobby, the draft bill was significantly watered down by Liberal Democratic Party lawmakers with connections to the tobacco and restaurant industries. “The legislation that eventually passed fell far short of expectations,” said a senior bureaucrat from the Ministry of Health, Labor, and Welfare. “In my view, it was almost meaningless. After years of careful preparation and data collection and huge efforts by our tobacco control team, supported by large numbers of experts from the medical and other professions, we feel very let down by members of the LDP who worked to dilute our draft legislation.” Over half of Japan’s restaurants will, by dint of their small size, be categorized as exempt from the new smoking ban. This is considered woefully inadequate by Japan’s anti-tobacco groups and leaves Japan with legislation that is still very lenient compared to international standards.

As a nonsmoking resident in Japan during the 1990s, I used to love visiting backstreet izakaya where I’d watch the chefs slicing and preparing fresh sashimi and cooking succulent morsels of chicken on skewers. In those days, I barely noticed when a fellow customer decided to light up a cigarette. But in Britain, it’s now been 12 years since smoking was completely banned indoors in any public space, and I’ve become so accustomed to clean air when eating that the smell of cigarette smoke in a Japanese izakaya has become unbearable. I would now never voluntarily visit an izakaya.

The story is not all negative, however. Last year’s setback for the antismoking lobby has led to renewed focus on how best to find a way forward without being blocked again by Japan Tobacco and its stakeholders. One of the new ideas focuses on the introduction of antitobacco legislation in local cities where it is believed the tobacco lobby will find it harder to influence outcomes. Much as in the United States where, in spite of President Donald Trump’s refusal to tackle climate change, individual states or cities are setting up their own local measures against climate change, Japan’s local governments are ignoring the national political mood and going ahead with local tobacco-control measures for the benefit of their own populations.

“We’re still aiming for a total ban on smoking in public places,” says Sakuta Manabu, Chairman of the Japan Society for Tobacco Control, “but we’re now pushing on two fronts, both national and local. Over the years, we’ve realized that it’s easier to achieve meaningful change at a local level than at a national level and so this is where we’re focusing renewed efforts. We have over five thousand members scattered in towns and cities all over Japan. They’re from all walks of life—academia, the medical profession, the law, and other fields—and they all share a deep concern about the dangers of tobacco.”

The JSTC has members in every city in Japan and can deploy them to make contact with local mayors and local authorities. The JSTC puts on public events to help local authorities to inform their communities about the dangers of passive smoking and to pave the way for local legislation. “It’s critical that accurate and independent data is delivered at the various public events that we help organize,” says Sakuta. “And we’ve found that this is beginning to yield good results in the form of passive-smoking prevention ordinances at the local government level.”

Good results have already been achieved in the city of Bibai, Hokkaidō, where an ordinance has been introduced for the prevention of passive smoking. According to the city mayor, the measures are designed to protect all citizens, but particularly young people and pregnant women, from the harmful effects of passive smoking and to inform people of the dangers it poses to human health. There will be help for smokers to quit smoking, and the city hopes to create an environment that discourages young people from taking up the habit. Overall it is hoped that the new legislation will promote better health and deliver savings on the local health budget.

Likewise, in Hyōgo Prefecture new measures, due to come into effect on April 1, 2020, focus particularly on protecting young people under the age of 20 and pregnant women. On this date, rules will change from allowing smoking in zoned areas to a strict no-smoking rule in any spaces used by the public such as nurseries, schools, universities, hospitals, old people’s homes, nursing homes, and local government facilities, both on site and around the site. Shops, banks, inns, hairdressers, beauty parlors, libraries, cinemas, and social welfare centres will be covered, but restaurants still have yet to be given a full ban.

In Tokyo, Governor Koike Yuriko has been successful in introducing an ordinance due to take effect in the spring of 2020—just in time for the Olympic and Paralympic Games—which will ban all smoking in restaurants, except in separate smoking rooms, irrespective of the scale of business. The neighbouring city of Chiba is to follow suit with an ordinance along the same lines.

And in Toyohashi in Aichi Prefecture, a significant step forward has been achieved with the passage of a city ordinance that subjects heated tobacco products to the same rules that apply to cigarettes. In line with recent high-profile reports in the United States, indicating that vaping can be highly damaging to health, Toyohashi has been advised by a panel of medical specialists that HTP smokers exhale toxic substances. As a result, it has banned the use of HTPs in public spaces. It is hoped that this idea will spread to other local authorities.

Another strategy being considered is the idea of promoting public-private collaboration to help implement antismoking projects. The concept would allow local governments to outsource delivery of antismoking programs to private sector actors, which would then be paid according to results. In practice, it would involve a private company delivering a project to help citizens cut back on smoking. This would in turn save money from the local health budget, and the private company would take a share of that saving. “It’s a new idea, but one that could be very effective if it were implemented with care,” said Sakuta. “It makes a great deal of sense to incentivize the delivery of better health on a commercial basis in this way.”

There is still some way to go before Japan’s achieves the total ban on all indoor smoking, as recommended by the WHO’s Framework Convention on Tobacco Control. But in spite of the disappointment over the watered-down national legislation, progress is being achieved locally, and with a steadily falling smoking rate overall, the outlook appears positive.

(Originally written in English. Banner photo: A Tokyo restaurant owner puts up a sticker on August 31, 2019, a day before the start of new metropolitan smoking regulations. © Jiji.)