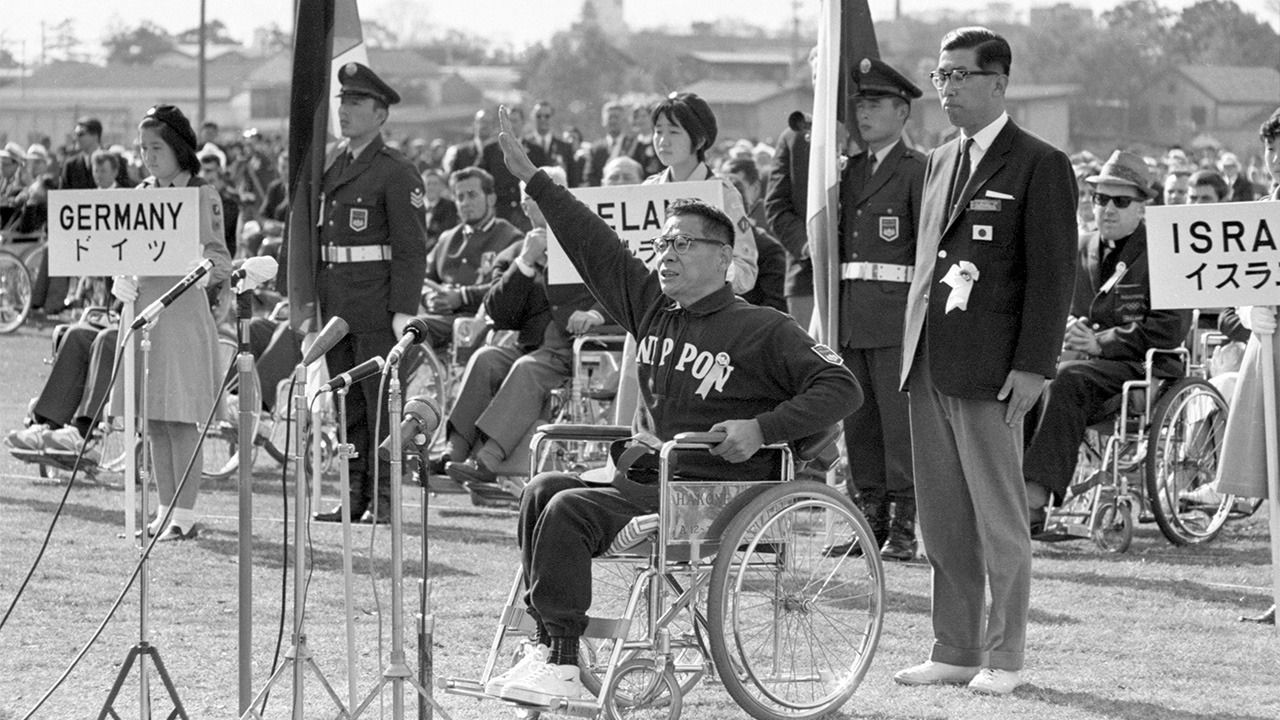 The 1964 Tokyo Paralympics: The Origin of Disabled Sport in Japan

Society Sports Tokyo 2020 Feb 25, 2020
When the Tokyo Paralympic Games were held in 1964, it seemed unthinkable that those with disabilities could play an active role in Japanese society. The Paralympics laid the groundwork for disabled sports, thereby opening doors to broader social participation.

With the 2020 Paralympic Games, Tokyo will become the first city in the world to have hosted the Paralympics twice. Tokyo’s inaugural Paralympic Games were held after the 1964 Summer Olympics, from November 8 to 12, 1964. At the time the Tokyo events were formally considered a continuation of the Stoke Mandeville Games, first held as a domestic competition in London in 1948 and an international gathering in 1952. But after the International Paralympic Committee was established in 1989, these games were retroactively regarded as the second Paralympic Games, following the first gathering in Rome in 1960. In this article, I will consider the impact that the games had on those involved and on Japanese society as a whole, while referring to quotations from those who were involved.

The father of disabled sports in Japan is Nakamura Yutaka, who worked as a doctor at Beppu National Hospital. In 1960, Nakamura studied the use of sports as rehabilitation at Britain’s Stoke Mandeville Hospital under Ludwig Guttmann, the founder of the Stoke Mandeville Games that were the precursor to the Paralympics. After returning to Japan in 1961, Nakamura held the Ōita Games for the Physically Disabled. We can therefore say that it was Nakamura’s encounter with Guttmann that brought the Paralympics to Japan.

In those days, Japan lacked the facilities, equipment, or legislation required to enable the disabled to participate in sport. When the Stoke Mandeville Games representatives inquired about the possibility of holding a tournament in Japan, the Japanese organizers decided to emphasize the fact that Japan would be hosting an international competition, in order to establish infrastructure in Japan. You could even say that the 1964 Paralympics was an outcome of gaiatsu—international pressure—here applied to improve the environment for disabled athletic endeavor in Japan. Because the creation of domestic infrastructure for disabled sport was part of the Paralympics’ brief, it was structured as two separate tournaments: the International Stoke Mandeville Games, an international tournament for athletes with spinal injuries, and a second tournament held on November 13–14 for those with other disabilities.

The 1964 Tokyo Paralympics was a series of surprises for Japanese participants. One competitor says he experienced many firsts, such as the opportunity to meet athletes from overseas. He was particularly impressed by the diverse range of wheelchairs used by the International athletes, recalling that, “in Japan, everyone had the same wheelchair. These athletes were using all different types—I never knew there were so many varieties.”

Something mentioned by many involved with the Paralympics as well as in newspaper reports was the cheerful demeanor of the overseas athletes. Another competitor found the vibe of the foreign athletes to be completely different from their Japanese counterparts, saying that, “we disabled Japanese were not very worldly, and had had almost no contact with the rest of society.” According to this competitor, at the time, no arrangements were in place that would allow disabled people to participate in society, and indeed, most of the 53 Japanese Paralympians resided in hospitals or other such facilities. This contrasted with the foreign athletes, most of whom had been rehabilitated into their communities, and were leading similar lives to their able-bodied counterparts.

A volunteer interpreter commented on how the foreign athletes wanted to venture outside the Olympic village and explore their surroundings. The Japanese staff who attended to these athletes were surprised by how proactive they were. The very fact that disabled people were leading active lives challenged the perceptions held by Japanese people in the 1960s about the disabled.

The first competitor mentioned above said that the Paralympics made him see the disabled in a different light. The second noted that the experience made him feel that Japan was 30 or 40 years behind in its treatment of the disabled. It was claimed that the performance difference between foreign athletes and their Japanese counterparts was due to the gap in the percentage of disabled people who are rehabilitated into society. The Paralympics provided an opportunity to close this gap.

A Source of Confidence

Once it was agreed that the Paralympic games would go ahead, Kasai Yoshisuke was appointed to oversee the tournament. Kasai had served as an undersecretary in the Ministry of Health and Welfare (now the Ministry of Health, Labor, and Welfare) immediately after the war, where he created the blueprint for Japan’s welfare policy. After leaving the ministry, Kasai became deputy president of the Japanese Red Cross Society, where his extensive network of connections came in handy when organizing the Paralympics. The games needed to rely on volunteer labor for many of the necessary services, for example, interpreting. The Japanese Red Cross established a volunteer interpreting brigade after Kasai approached the head of the Red Cross Youth, Hashimoto Yūko, who was proficient in English.

If Nakamura was the father of sport as a form of rehabilitation in Japan, then Kasai was the man who made the Paralympics a part of public welfare policy and laid the groundwork for disabled sport. In an interview with the Asahi Shimbun, Kasai responded to those who criticized the 1964 Paralympics’ ¥100 million price tag or claimed that the government should be placing priority on caring for the severely disabled, rather than on sports tournaments.

Kasai is quoted as saying that there would always be a limit to the number of patients that could be housed by facilities for the severely disabled, and that it was more important for a larger number of disabled people to gain confidence and be rehabilitated into society through the Paralympics. Kasai, more than anyone else, was the person who advanced the cause of disabled sport by connecting the Paralympics to the concept of supporting rehabilitation and societal reintegration for those with disabilities.

One legacy of the 1964 Tokyo Paralympics was the creation of infrastructure that allowed disabled people to participate in sports. After the Paralympics, the Japanese Para-Sports Association was founded, the second portion of the international tournament held on November 13–14 was rebranded as a national disabled sports tournament, and a coaching system was established. The Paralympics therefore provided future generations with the opportunity to participate in disabled sports. In these ways and more, the legacy of the games was fully incorporated in Japan’s welfare policy. The competition boosted the general public’s awareness of the disabled and accelerated their reintegration into society, thereby boosting the societal participation of Japan’s disabled, which was recognized to be below that seen in other nations.

At the same time, though, the games represented a departure from the message of the postwar disability movement, which had mainly stressed the right to life of the severely disabled. In a sense, the Paralympics defined disabled people narrowly—with its focus on those physically active and agile enough to take part in sporting events—and only succeeded in making a limited range of diversity visible.

Will the 2020 Tokyo Paralympics make visible the diversity within society and foster a culture of respecting this diversity? Conversely, is there a risk that only disabled people who play sports will steal the limelight? One hopes that the Paralympics will motivate us to consider the diverse possibilities for coexistence in society, not limited to the disabled, that lie beyond the games.