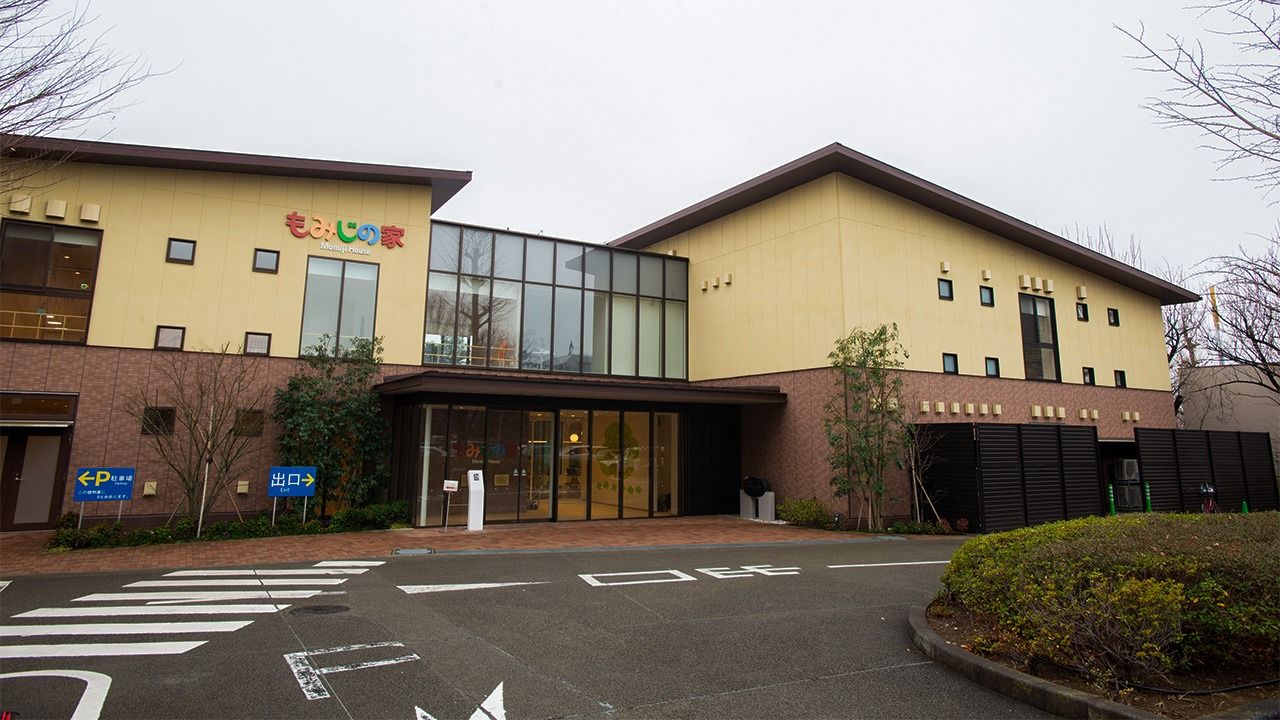 Society Health Family Apr 23, 2020
Kidani Masayo, a long-time resident of Britain, dreamed of creating a child hospice in Japan like the one she knew at Oxford. Her dream came true in 2016 when Momiji House was opened at the National Center for Child Health and Development in Tokyo. A look at the facility and the need to sustain and expand its services.

The National Center for Child Health and Development is located in the green Tokyo suburbs of Setagaya. Tucked away on the spacious grounds is a two-storied building with a colorful sign bearing the name of the facility, Momiji House. Inside is a large, spacious foyer with a glassed-in atrium in the middle: Here grows a Japanese maple tree, a momiji, symbol of the facility and the source of its name. 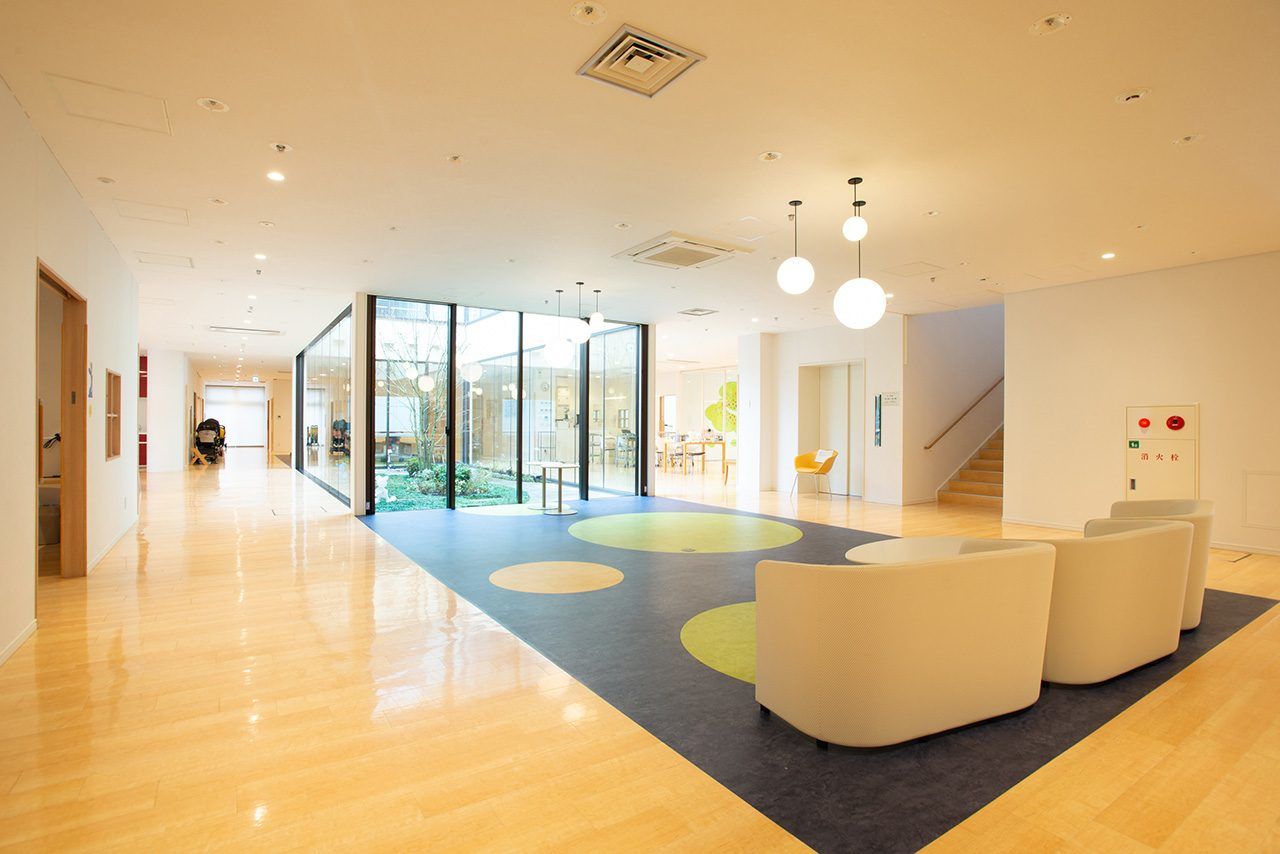 At 10:00 in the morning, check-out time for overnight users of the facility, a mother approaches with her severely ill daughter in a wheelchair. She smiles at House Manager Uchida Katsuyasu and his staff and departs with a cheerful thank you and farewell.

Uchida guides us through the facility. On the first floor is a dining room and kitchen, five rooms where families can stay together, and two rooms for three occupants each. There is also a specially equipped bathroom for bathing severely disabled children and a spacious communal bath with a jacuzzi function that can be shared by the whole family. Each room is furnished in relaxing pastel colors, and the communal bath looks out onto a tiny enclosed garden. The ambience is that of a high-grade Japanese-style inn or hotel.

We asked Uchida how the building came to be designed and built this way. “No one had experience in Japan with a project like this. The builders and some of our nurses visited the Helen & Douglas House in Britain to get fresh ideas on what was needed.”

The baths are popular, but equally popular is the sensory room on the second floor with its mirror ball, waterbed, and other sensory and tactile devices and items to be enjoyed by the severely ill children along with their families. There is also a soundproof music room and a playroom full of picture books and toys. Everything is directed at giving the children a space in which they can learn and play just like they would at a childcare facility or school. 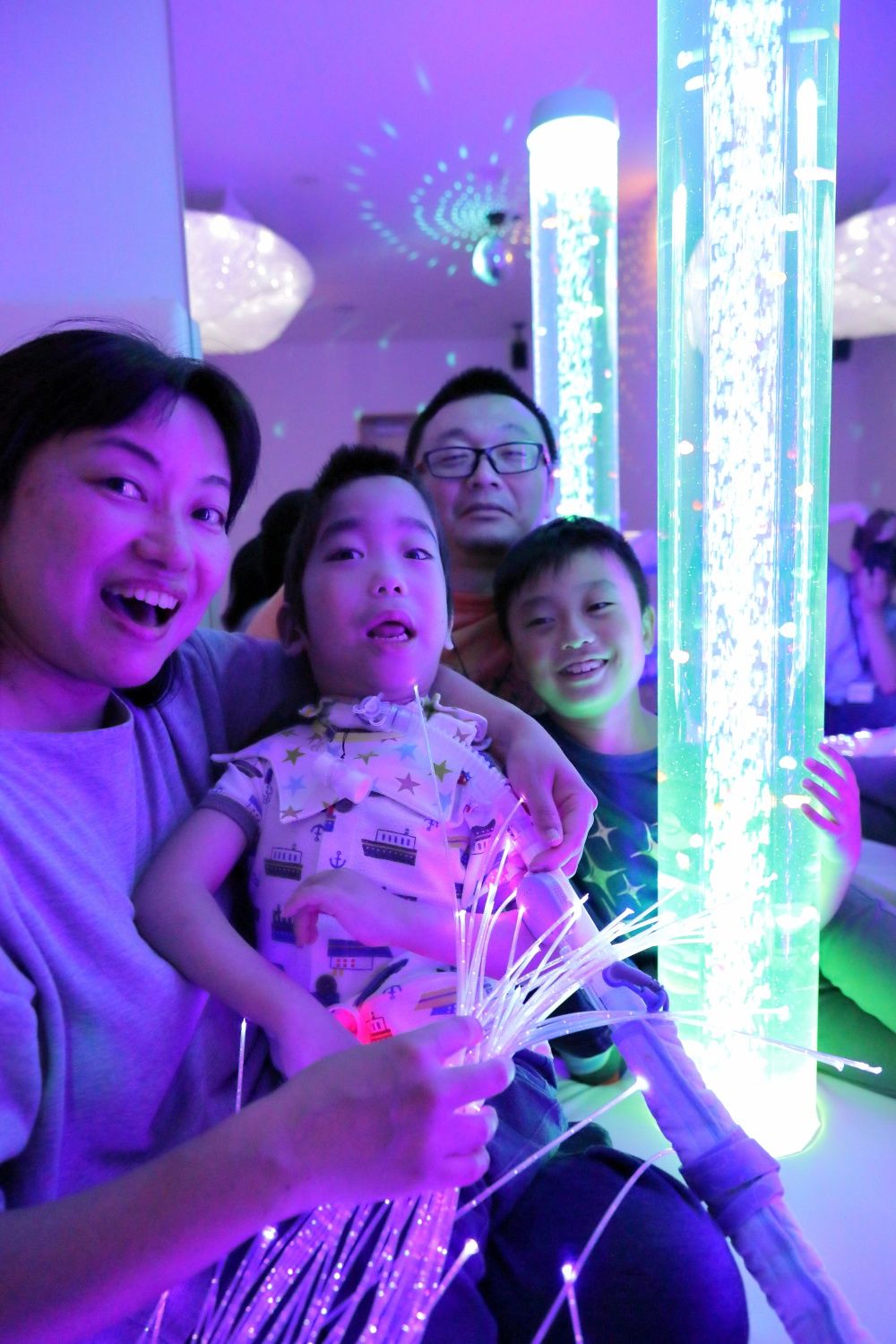 Miyazoe Shinsuke plays in the sensory room with his family. (Photo courtesy of KidsFam Foundation) 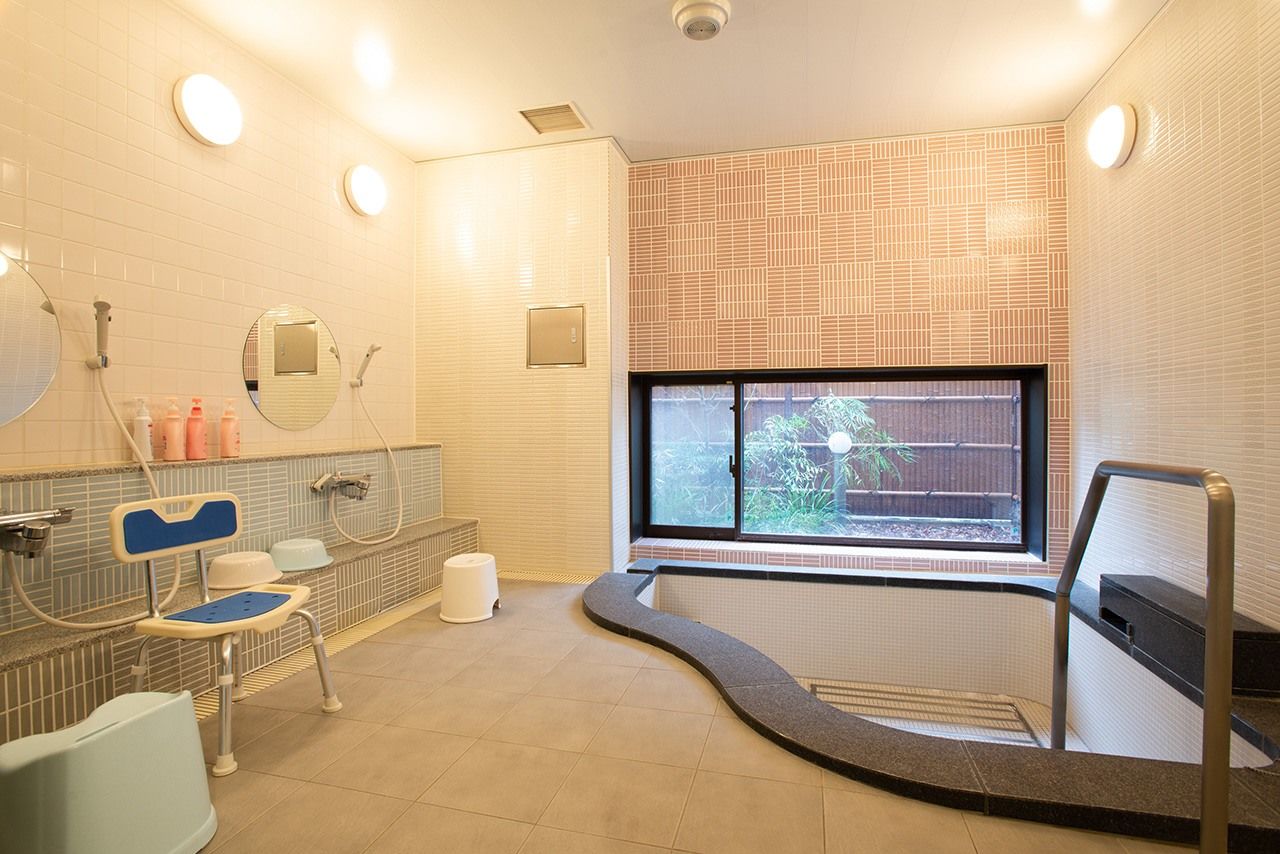 Parents often take advantage of the spacious communal bath to enjoy a long, solitary soak in the hot tub.

Momiji House opened in April 2016. It is modeled on the Helen & Douglas House, the world’s first hospice for children, in operation in Britain since 1982. Like its UK model, Momiji House offers a place of respite for children with severe illnesses (requiring ventilators, tube-feeding, and other such devices and special measures) and the families who are caring for them at home. The maximum duration of a single stay is 9 nights, 10 days. Momiji House is the first and only short-term medical stay facility of its kind in Japan that is managed and operated by a public medical institution. 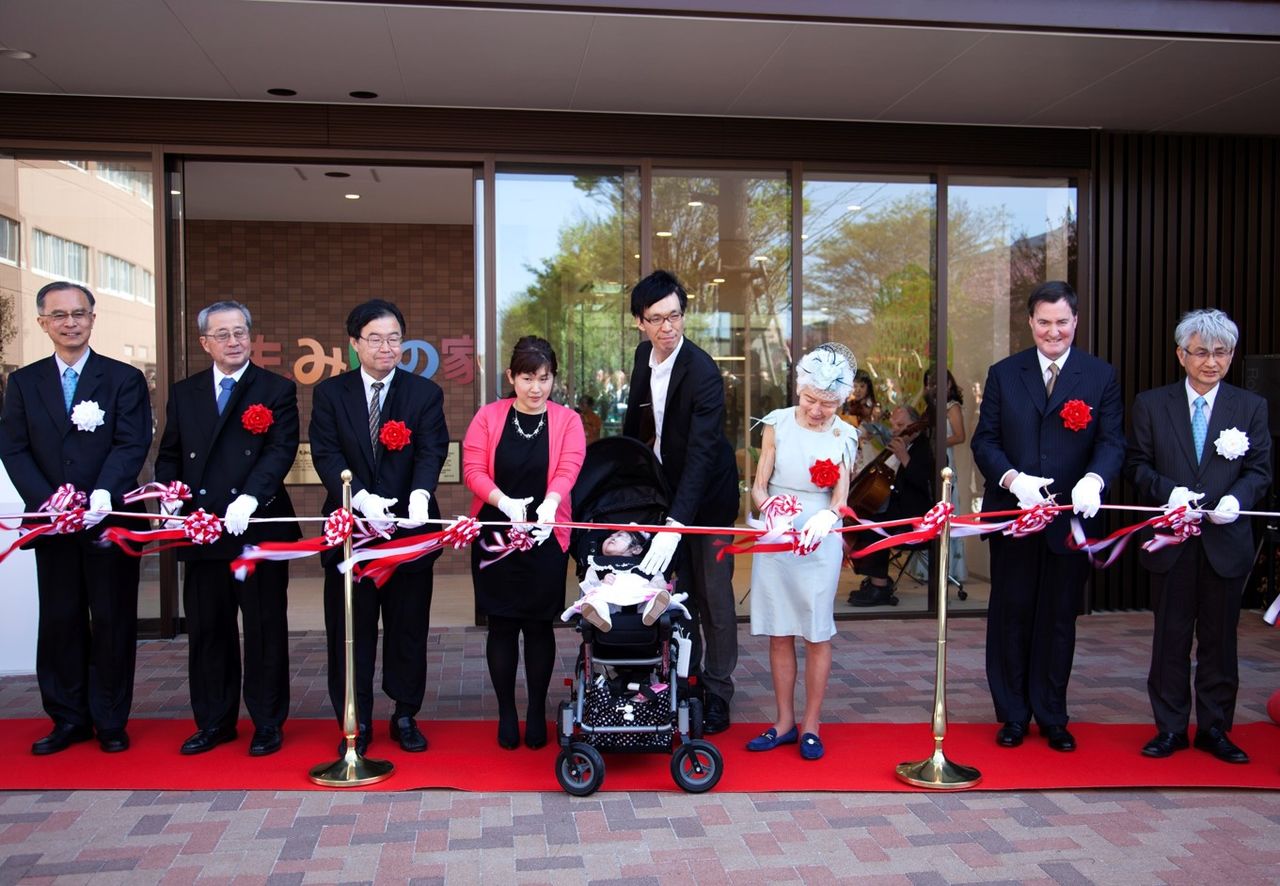 Momiji House was the brainchild of Kidani Masayo, a trustee of the UK Red Cross Society who had worked as a volunteer at the Helen & Douglas House. Hoping to build a similar facility in her home country of Japan, she turned for support to the Kidani Memorial Trust, which was already providing funding for the Helen & Douglas House. KMT is a charitable organization helping to finance treatments and support facilities for cancer patients and patients suffering from intractable diseases. It is named after Masayo’s brother-in-law, Dr. Kidani Yoshinori, who started the trust with patent income from a major cancer treatment drug he developed. With financing from KMT, Kidani Masayo started a drive to build a Japanese counterpart to the Helen & Douglas House, beginning in 1991 with the Momiji Project, a Japan-UK exchange program for young people with disabilities. Under this project, children at the Helen & Douglas House were brought to Japan to visit the NCCHD.

An exchange program was one thing; constructing a completely new building on the hospital premises, where sick children and their families could stay, was another. The considerable costs of such a project made it difficult to advance. The situation changed radically, however, when Igarashi Takashi, a professor at the University of Tokyo specializing in pediatric care, was appointed chief executive officer of the NCCHD.

“Japan has a lot of facilities for the elderly, but there has been little understanding of the needs of children requiring intensive medical care,” says Igarashi. “Families have been left to care for their sick children on their own. Imagine the burden on a mother who has to suction mucus from her child two, three times a day, every day. I wanted to do something and made the decision to have the house built. After all, donations could be used to cover the shortfall in funds. The facility is operated by the NCCHD, but we named it Momiji House after Kidani Masayo’s Momiji Project.” 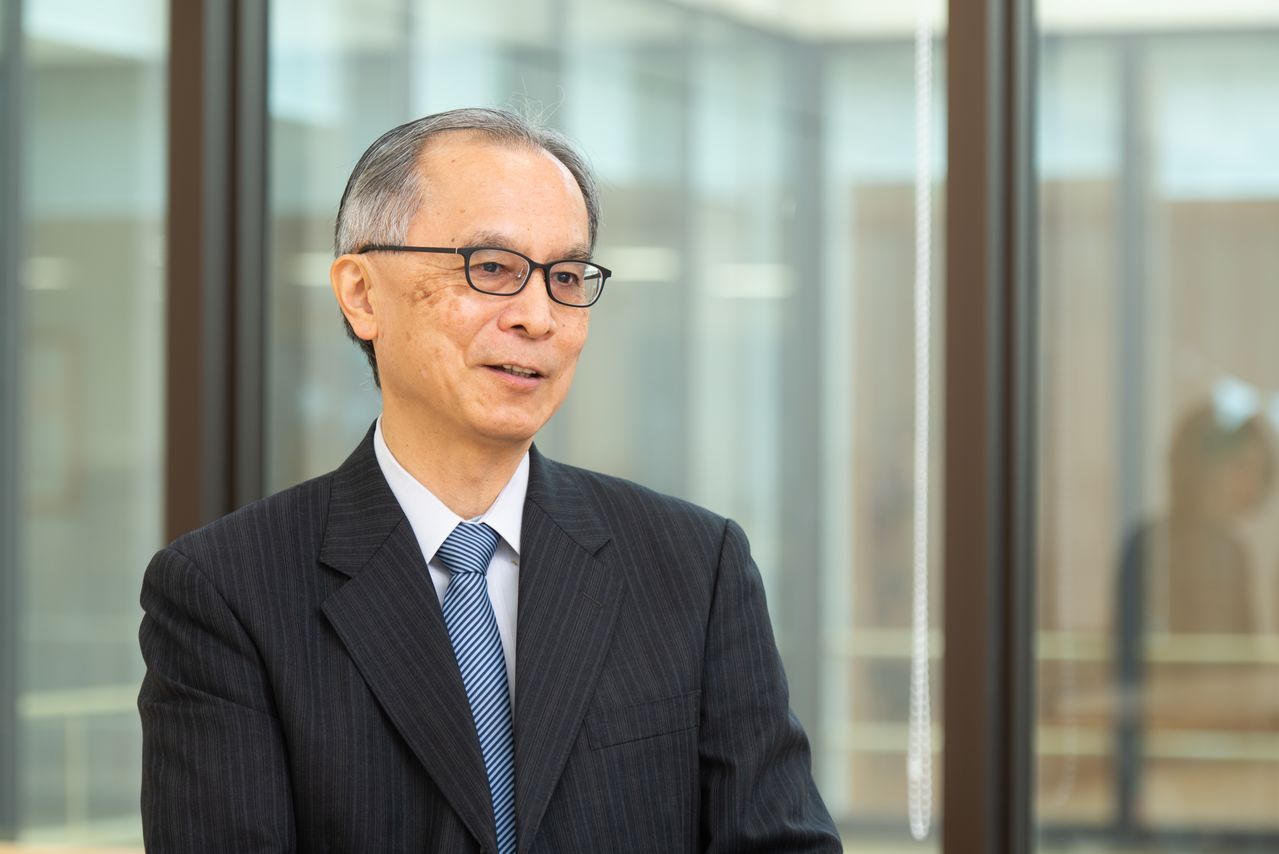 “The need to care for a severely ill child often forces mothers to give up their careers and can lead to family disruption and divorce,” notes Igarashi. “We offer these people some respite through their monthly visits.”

The building of Momiji House was financed with ¥400 million from the Kidani Memorial Trust, ¥350 million from the Nippon Foundation, and additional funds collected through donations. Fulltime staff include Uchida, the house manager, 15 nurses (with two on duty every night), two childcare professionals, one certified nursing care worker, and one office manager. Momiji House is open to severely disabled children from infancy to age 18, including those who are ambulatory but are unable to use other facilities because of their advanced medical needs. In addition to medical care and daily life support, children at Momiji House are given ample opportunities to play and learn. Those with terminal illnesses can, if they and their families so desire, stay to receive hospice care.

As of December 2019, Momiji House had 684 registered users and a cumulative total of 2,273 people had made use of its facilities. In 2019, an average of 60 people used them each month. With a waiting list more than 80 people deep asking to be registered, the facility has had to turn a number of applicants away. 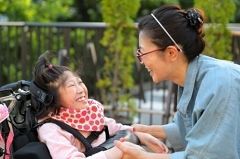 Asuka and her mother visit Momiji House once every few months. Asuka celebrated her sixteenth birthday this year. “The next step is to help her become mentally and emotionally independent,” says her mother. (Photo courtesy of KidsFam Foundation)

Thanks to major advances in medicine and neonatal intensive care units, it is now possible to save the lives of many newborns born prematurely or with congenital conditions. At the same time, this has meant a growing number of children needing continued medical care at home such as ventilator-assisted breathing, tube feeding, or mucus suction. There are nearly 20,000 such children in Japan today.

There is a gradual movement to create medical facilities similar to Momiji House throughout the country. These “homes-away-from-home” include the Hospice Children’s Hospice Hospital managed by Yodogawa Christian Hospital, Tsurumi Children’s Hospice, and the Nara Oyako Respite House.

Uchida notes, however, that government support is essential to increase the number of short-stay facilities to care for children with disabilities, offer respite for their families from daily nursing care, and disseminate related services on a nationwide scale. 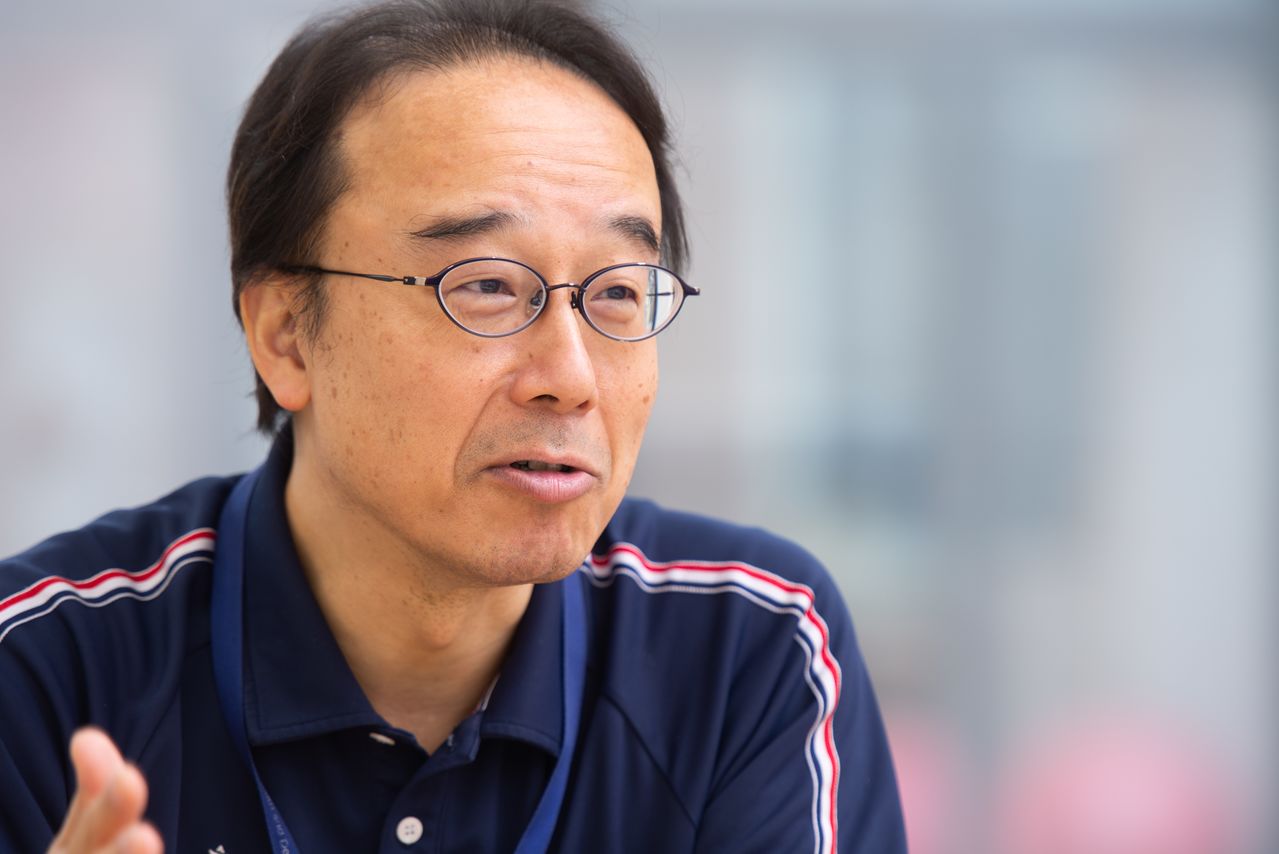 Uchida Katsuyasu became the first house manager of Momiji House in 2016. “I wanted to get involved in some kind of welfare work, but I never thought it would be in such a wonderful place.”

“We have visitors from all over the country who are seeking to build a facility like Momiji House. They backpedal rather quickly, however, when I tell them that our operating costs total 190 million yen annually and we are always roughly 10 percent, around 19 million yen, in the red.” The biggest objective right now, explains Uchida, is to create a system that can be put into practice anywhere.

He says he is aiming for fiscal 2021, when the government will be revising its policies on payments for services and support for persons with disabilities. Uchida has organized a conference of people sharing the same concerns to draft a petition that will be submitted this summer to the Ministry of Health, Labor, and Welfare.

“For example, we can increase the frequency of bath times and have the childcare professionals provide a full scale of activities for the children. The families are delighted by these kinds of measures, but the fact is, there is no remuneration for the extra work involved—this is why we’re in the red. I am not saying this kind of extra work should be mandatory, but it would help if the government offered additional renumeration for extra services. That would be a strong incentive to provide high-quality care.”

Uchida has also turned to local administrations to request subsidies and grants to cover operating expenses. Setagaya is providing a ¥17,000 subsidy for every city resident who uses Momiji House. “The city of Kawasaki, right next door, has also agreed to pay the same amount for Kawasaki residents who come to Momiji House. We are grateful for this kind of support,” says Uchida. 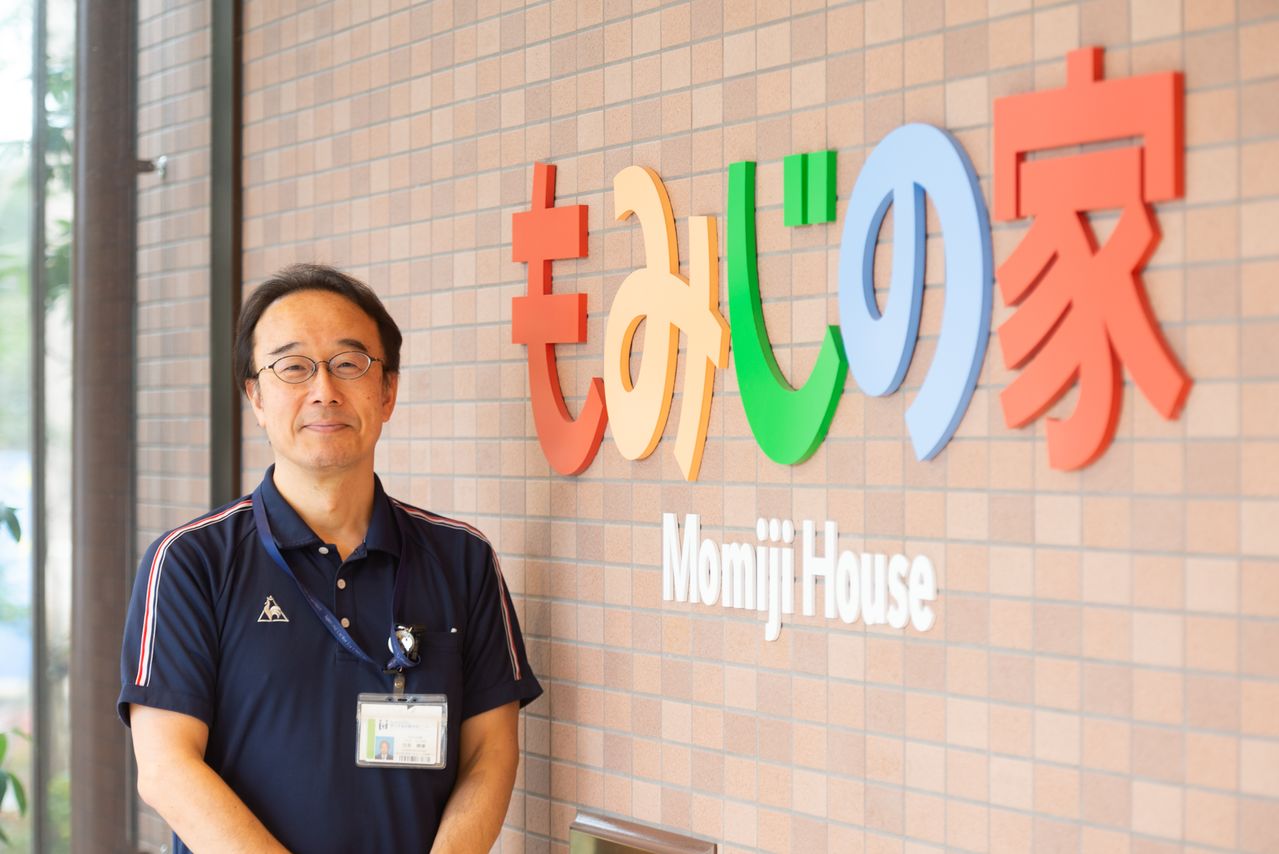 Momiji House is also home to the offices of the KidsFam Foundation for Severely Ill Children and Their Families established by Kidani Masayo. KidsFam subsidizes some of the fees for using Momiji House to ensure that children and their families can enjoy security and comfort during their stay. The Foundation also provides photographers to take family portraits and otherwise gives direct support and services to users.

Britain’s Helen & Douglas House was the world’s first hospice for children. That country now has more than 40 such facilities, and more are appearing throughout Europe, North America, and Australia. Kidani Masayo travelled frequently between Britain and Japan as she worked to establish a Japanese version of Helen & Douglas House. Her efforts have coalesced into Momiji House. It is the shared hope of all families with severely ill children in Japan that similar facilities will be built throughout the country. 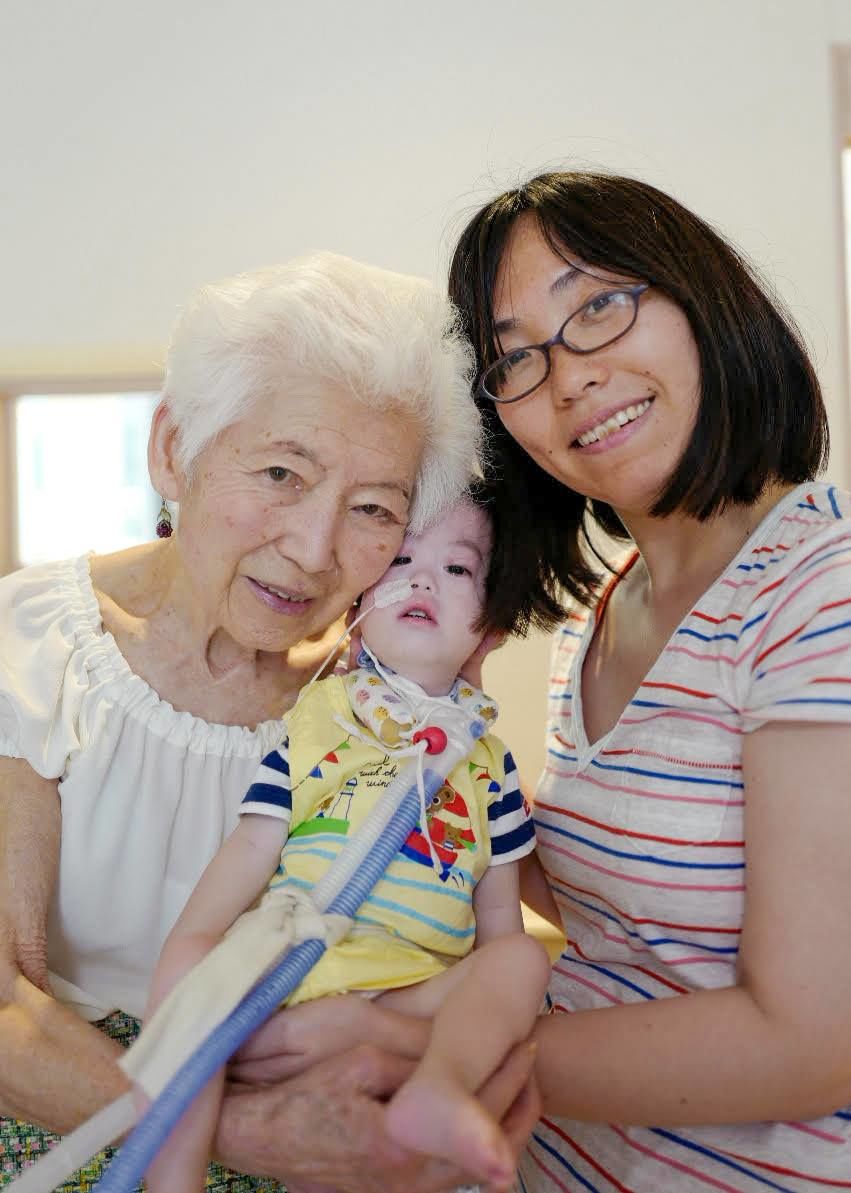 Kidani, at left, with a mother and child staying at Momiji House. (Photo courtesy of KidsFam Foundation)