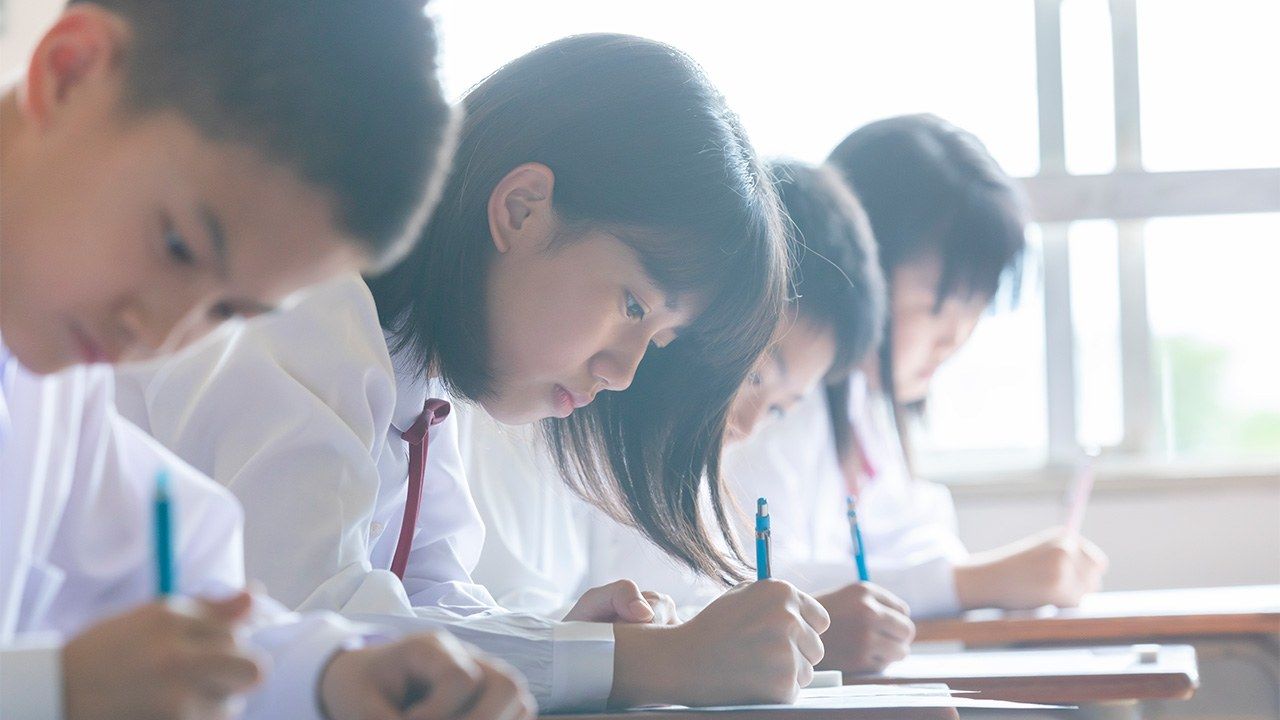 Education Society May 26, 2020
Problems like absenteeism and bullying are on the rise at Japanese schools. A major cause is the excessive emphasis on rules and conformity, which creates a stifling atmosphere. Education should be transformed so as to accommodate students’ individuality.

Japan’s education system is in critical condition. For example, a 2019 survey by the Ministry of Education, Culture, Sports, Science, and Technology (MEXT) found that there were more than 540,000 reported cases of bullying at schools, a year-on-year rise of 31%. Absenteeism, violent incidents, and suicides have also been increasing.

A survey by public broadcaster NHK the same year found that in addition to the 110,000 junior high school students defined as absentees (meaning they miss more than 30 days of school for reasons other than sickness) there were another 330,000 “quasi absentees,” including students who went to school but studied separately from their classmates and those who only attended for part of the day. In other words, some 440,000 junior high school students—one-eighth of the total—are not leading a normal school life. This is a truly dire state of affairs.

The reasons that the students in question cited most commonly for not attending school or for avoiding regular classes were “aversion to the atmosphere of the class as a whole” (44%), “worries about school studies” (36%), “problems with friends” (29%), “worries about relations with teachers” (23%), “experience of being bullied” (21%), and “inability to adapt to school rules and regulations” (21%).

A notable feature of absenteeism today is the multiplicity of its causes. This complexity makes it extremely difficult to understand the nature of the issue and to find solutions. At the same time, however, the essence of the matter is simplicity itself. Under Japan’s existing school system, which has long been taken for granted, pupils are grouped uniformly by age into classes in which they learn the same content in the same way and at the same pace, studying the questions and answers in ready-made textbooks for each subject and progressing together from one grade level to the next. The problem is that this conveyor-belt style of education has become obsolete.

This system was developed in Britain during the nineteenth century, in the heyday of the age of industrial mass-production, and it eventually spread to Japan and elsewhere around the world. Advocates believed that applying the standardized mass-production approach to education would give an immediate boost to the nation’s education levels. And in a sense, it was certainly successful.

Now, however, the system of uniform age-based groupings is the fundamental cause of many of the issues schools face. Take the problem of students falling behind. If everybody studies the same content at the same pace, a student who stumbles along the way and fails to learn some portion of the curriculum is liable to be left behind, unable to understand the content of subsequent lessons. For students like this, who find themselves unable to keep up with their classmates, just going to school becomes an unpleasant experience. There is also the opposite pattern, where students already fully understand the content of the class lessons but are unable to move on ahead, because everybody is expected to progress together. They lose interest in classes and come to dislike school. Both issues are related less to individual ability than to structural problems in the present education system.

The highly homogenous nature of classrooms where all the pupils are the same age increases the pressure to conform, tending to produce a stifling atmosphere in which the pupils try to read the unspoken expectations of their peers and behave accordingly. Often such classrooms become breeding grounds for bullying.

Though the school system continues to operate on the assumption of homogeneity, the students in classrooms are certainly not all the same. For example, one in seven lives in relative poverty. It is now widely known that such economic disparities are closely linked to differences in academic performance. In addition, there are an increasing number of children with developmental disabilities. The data is a little old, but a 2012 MEXT survey found that 6.5% of elementary and junior high school students may have had a developmental disability; this means an average of two or three affected students in every class.

The fact of the matter is that there are great variations among children in terms of economic, academic, and other factors. Properly speaking, schools should switch to a system under which they are able to respond to the variety among the children they are teaching. In fact, however, many schools appear to be targeting ever greater uniformity.

One way school authorities are doing this is through overparticular rules. To be sure, there were many strict rules in the past. But now we see them extending to picky details, such as “No ponytails,” “Hair must cover the nape of the neck,” “Underwear must be white,” “No fanning the face even when hot,” “No scarves,” as well as regulations stipulating the exact length of socks and skirts and those defining exactly what items may be brought to school. Many schools even go so far as requiring students with brown hair to submit proof that this is its natural color. This is a violation of human rights.

It is quite common to have rules on conduct during classroom lessons. This includes telling students what pens or pencils they should bring to class and where they should put them down on their desks. There are also rules on taking notes, raising hands, and how students should speak when they are called upon.

School rules govern teachers as well as students. In the name of lesson standards, schools and boards of education often require all teachers to conduct their classes in the same way. Today’s schools increasingly demand conformity from both students and teachers. No wonder absenteeism is rising.

There are many factors underlying the present situation. For starters, it is difficult to respond to diverse individual needs within a system where everyone does the same thing at the same pace. Furthermore, Japan’s teachers, said to be the busiest in the world, find that the only way they can get through their lessons is by forcing uniform content on their diverse students. The existing setup actually creates a vicious cycle that makes teachers’ jobs even harder. Consider the effort required that teaches must make to get all the students in a class to follow minutely detailed rules and standards.

Here I would like to note that many educators across the country are working toward structural reform in public education to overcome the problems I have mentioned. Initiatives aimed at changing the existing system of uniformity in education are spreading steadily at the national and local government levels, in schools, and in the private sector. I myself have been involved in the founding and operation of Karuizawa Kazakoshi School, which opened its doors in April 2020; this is an institution where classes consist of mixtures of pupils from kindergarten, elementary, and junior high school levels.

As a guiding vision for these initiatives, I would suggest the concept of “integration of individualized, cooperative, and project-based learning.” In place of the traditional model where everybody of the same age studies the same content at the same pace, I would like to see a shift to a model that emphasizes individualized learning supported by voluntary cooperation with others.

Under this sort of model, children would be able to progress in their studies at their own pace, and at the same time they could cooperate with others as needed, both to receive help and to provide it.. One aspect is to move away from the uniformity of classes consisting of pupils grouped by age to the diversity of learning communities that encompass children from different age levels. It would be good to create opportunities for cooperative learning among students across the existing institutional lines, all the way from kindergarten through high school. Instead of forcing diverse students into a uniform mold, the idea would be to welcome diversity, rather than pushing it into conformity, and creating an environment where diversity is accepted and fostered on a mutual basis.

Those who have watched children of different ages engaged in cooperative learning are sure to have noticed how the older ones look more dependable than usual. And the younger ones feel confident that their “big brothers” and “big sisters” will help them kindly. It is diversity in schools that makes it possible to create an environment conducive to mutual assistance.

The curriculum under such a model is not based on the study of ready-made answers; instead it centers on the idea of study as exploration. This means not just learning assigned lessons using assigned methods but posing one’s own questions in one’s own way and finding one’s own answers through multiple projects in which students can become genuinely absorbed. To conduct these projects, students can form teams with members of different age groups—or even different generations. This will allow children to get a much more direct sense of the genuine meaning of learning.

A structural change in public learning is sure to take place, and it must. I hope we can develop a vision and road map for this change through dialogue not only among educators but also with ordinary citizens. The COVID-19 crisis that we now face creates a compelling need for fundamental reforms in school education. Though there is some chaos on the front lines, I hope we can use this challenge as an opportunity to advance our deliberations on the needed changes.