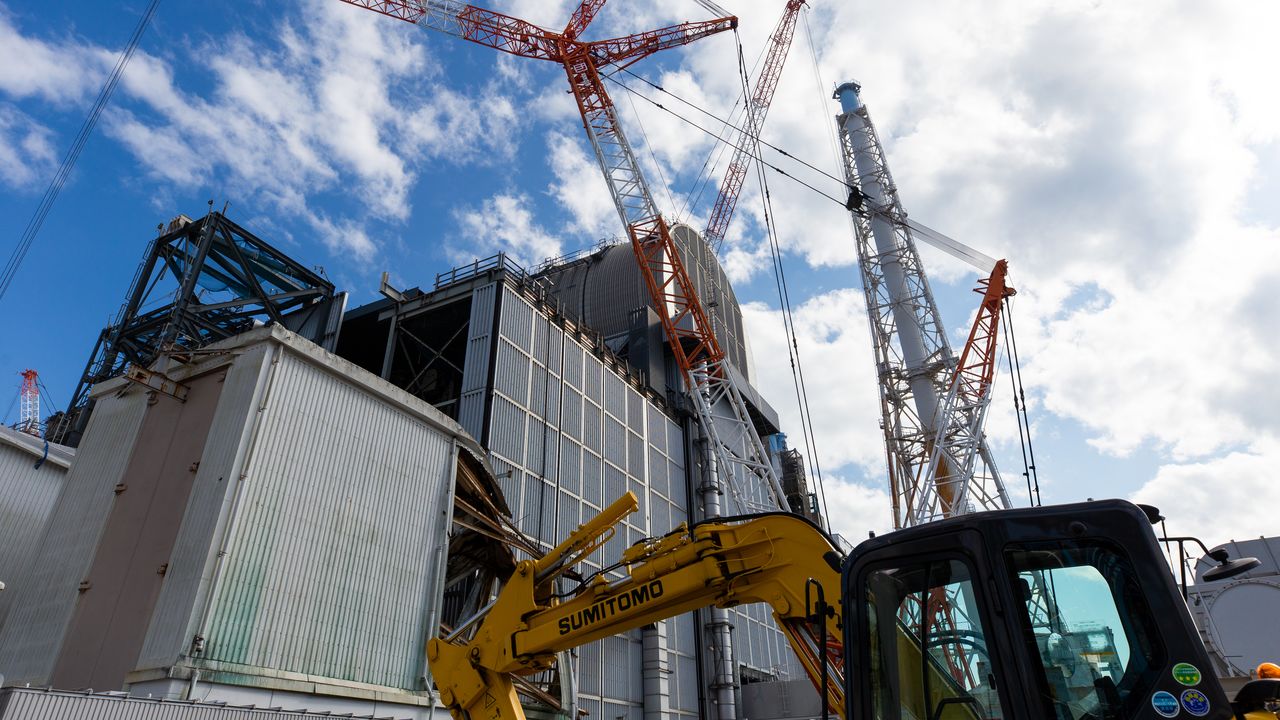 Society Mar 10, 2020
Work continues on dismantling the reactors at Fukushima Daiichi Nuclear Power Station, site of one of the worst nuclear accidents in history. Workers have made considerable progress on decontamination, but the environment remains a dangerous one. Our look at the daily lives of the people tackling the tasks of cleaning up Fukushima Daiichi.

In the evening on February 12, the day before we went to Fukushima for this report, an earthquake alert flashed onto the television screen: A magnitude 5.4 quake off of the Fukushima Prefecture coast had brought intensity 4 shaking to the coastal area where we were headed. “I sure hope this isn’t a foreshock to something really big,” I muttered to myself.

I decided not to tell my mother that I was heading to the Fukushima Daiichi Nuclear Power Station for work. Since this schedule had been decided, I had been rereading old articles on the situation at the nuclear plant while taking care of my other work. Just business as usual. But I had to admit that deep down, I was somewhat worried about this job.

When we arrived at the site on February 13, it became clear once again that this was not business as usual as we underwent identification checks and had our belongings searched to make sure we carried no hazardous materials or items. 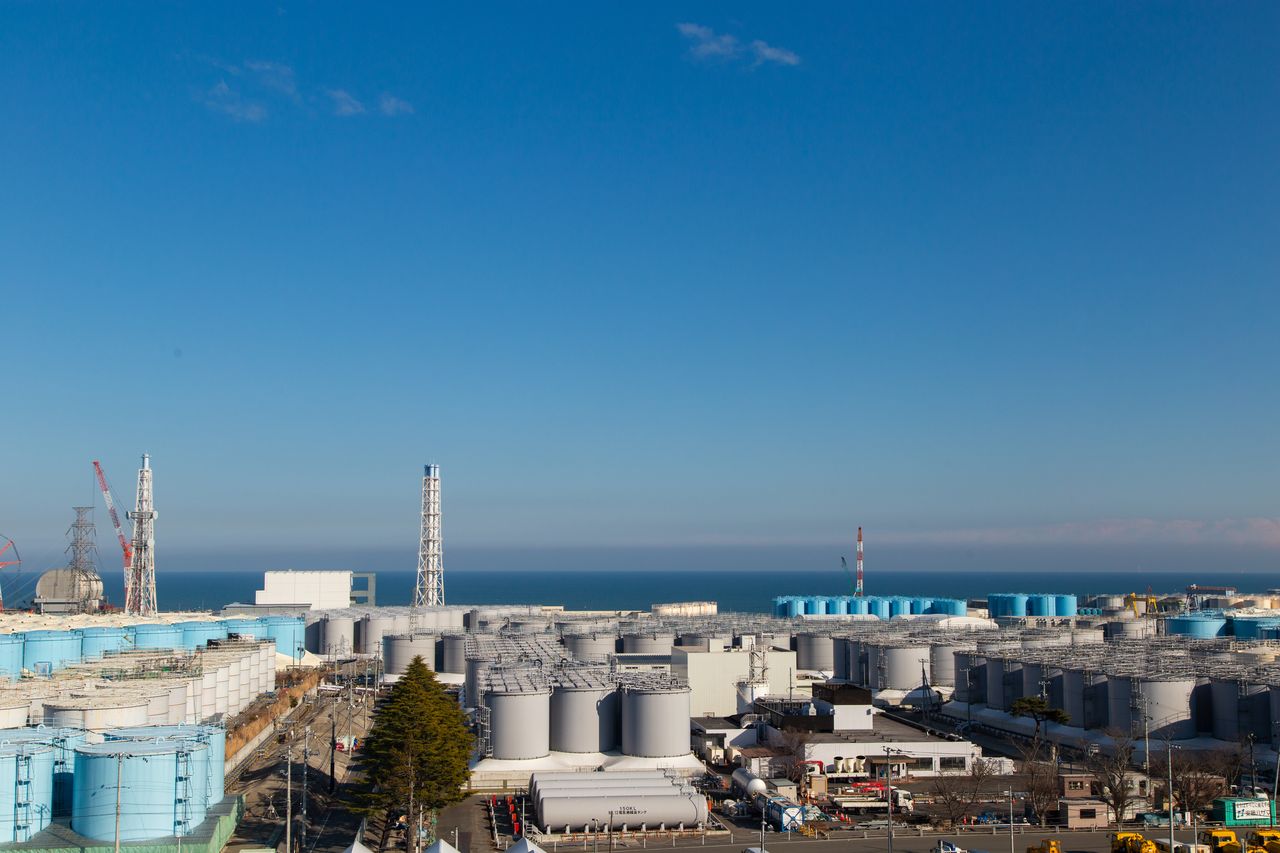 The Fukushima Daiichi site as it stands today. The tanks in the foreground contain water that has undergone decontamination processing; the Pacific Ocean lies beyond. 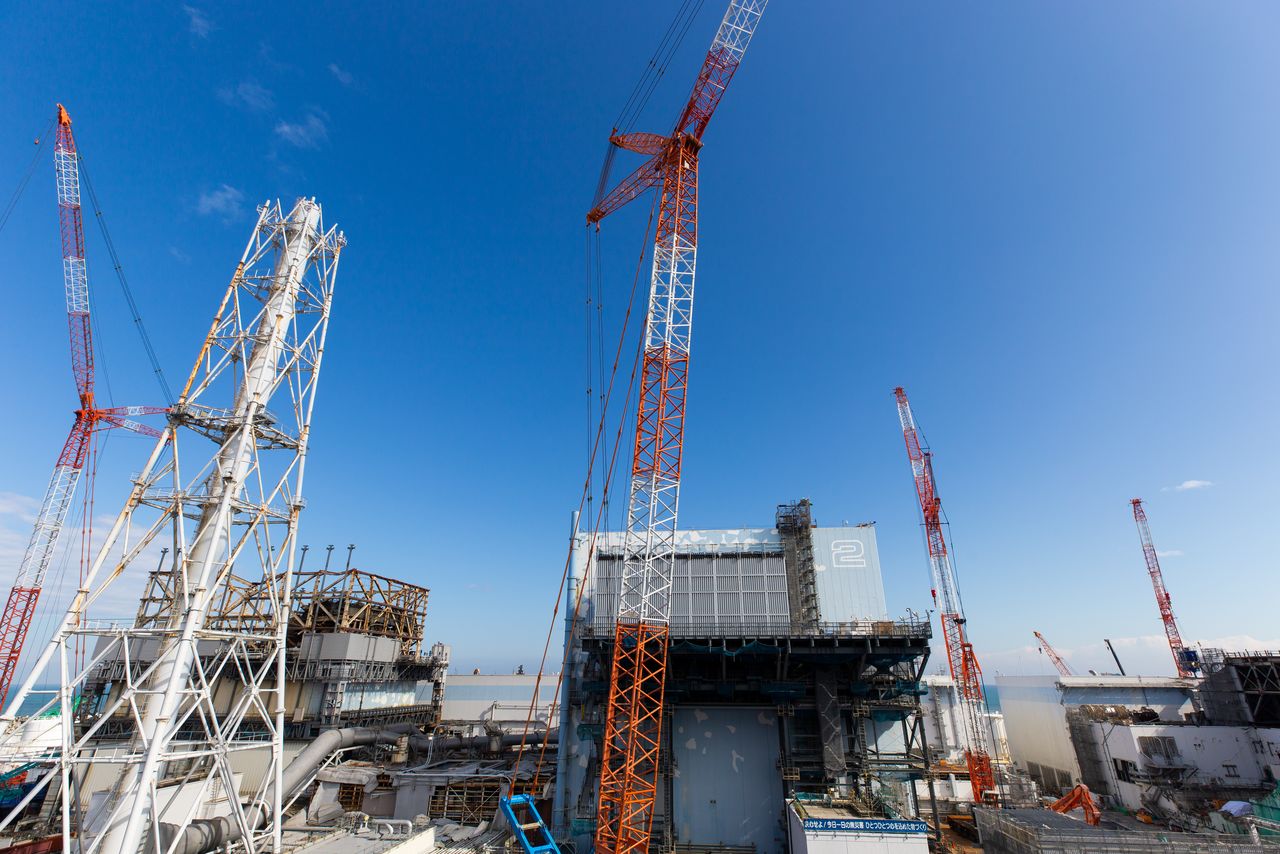 Dismantling work continues at the Unit 1 reactor building, at left, and the Unit 2 reactor structure. 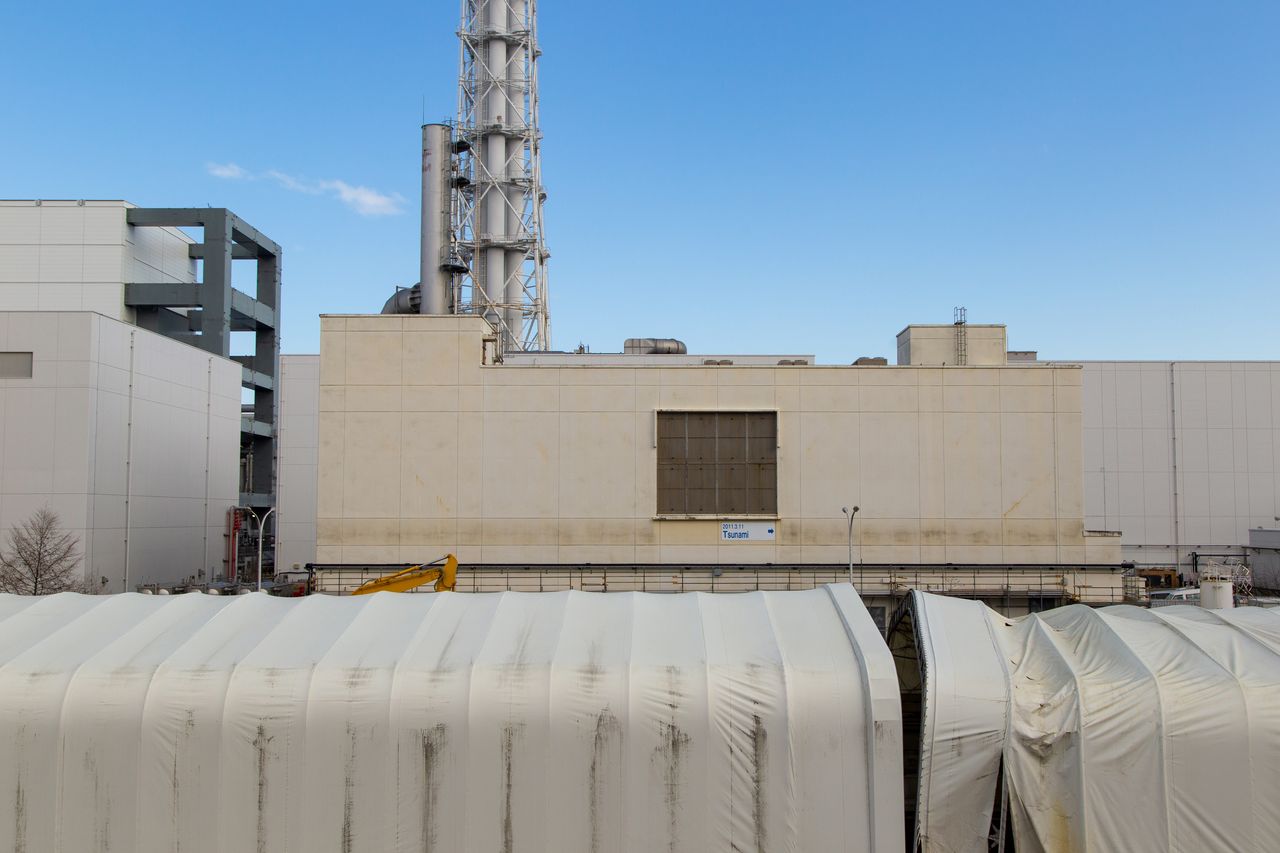 External walls at the power station still bear marks showing the height of the tsunami that struck nine years ago.

More than 4,000 people work on the nuclear power station grounds today. They are not all employees of Tokyo Electric Power Co., the operator of the station, though—in addition to TEPCO staff, Fukushima Daiichi is crowded with people from nuclear reactor manufacturers, civil engineers, water decontamination and air filtration specialists, and many other workers from a wide range of companies collaborating on this massive project. This may explain the friendly greetings that are constantly heard at the site—“Hello there,” “Keep it up”—as people pass one another in the hallways or paths outside. They’re a little like the greetings one hears on hiking trails in the mountains. They aren’t just friendly, good manners; they’re a quick way to check up on the well-being of others, and to be ready to communicate instantly with others in an emergency, whether or not you know them by name. 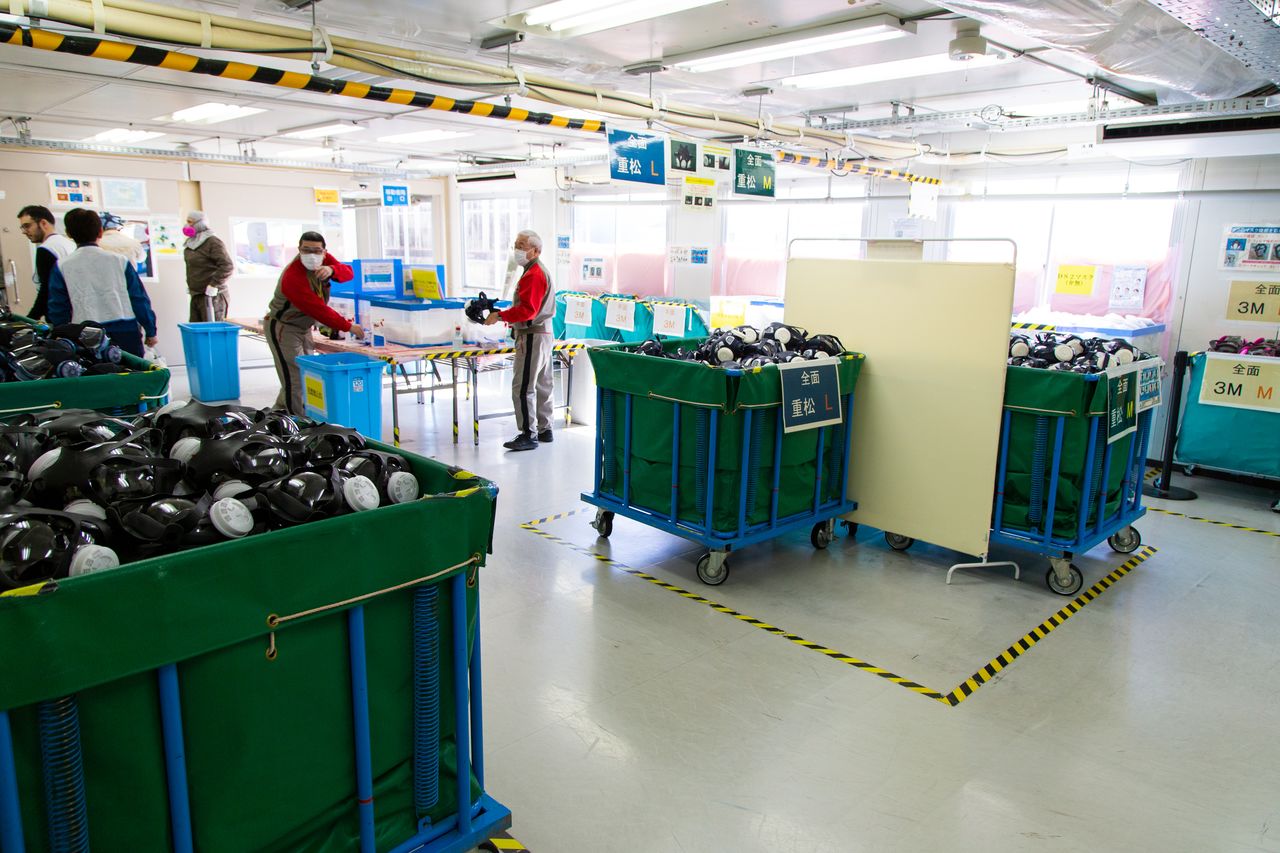 A room at the site where workers prepare and outfit themselves for the day’s tasks.

A look inside the site cafeteria shows an affordable menu of filling meals. Set lunches, donburi dishes served on bowls of rice, curry, and noodle offerings are all available at a fixed price of ¥390 each. Unlike the company cafeterias we see in Tokyo, this one serves nothing packing less than 800 or 900 calories. I order the ramen, which comes with a bowl of rice and xiaolongbao dumplings alongside it. The work at Fukushima Daiichi is physical and hard, and the workers seem to have little need for low-calorie or low-carb options. 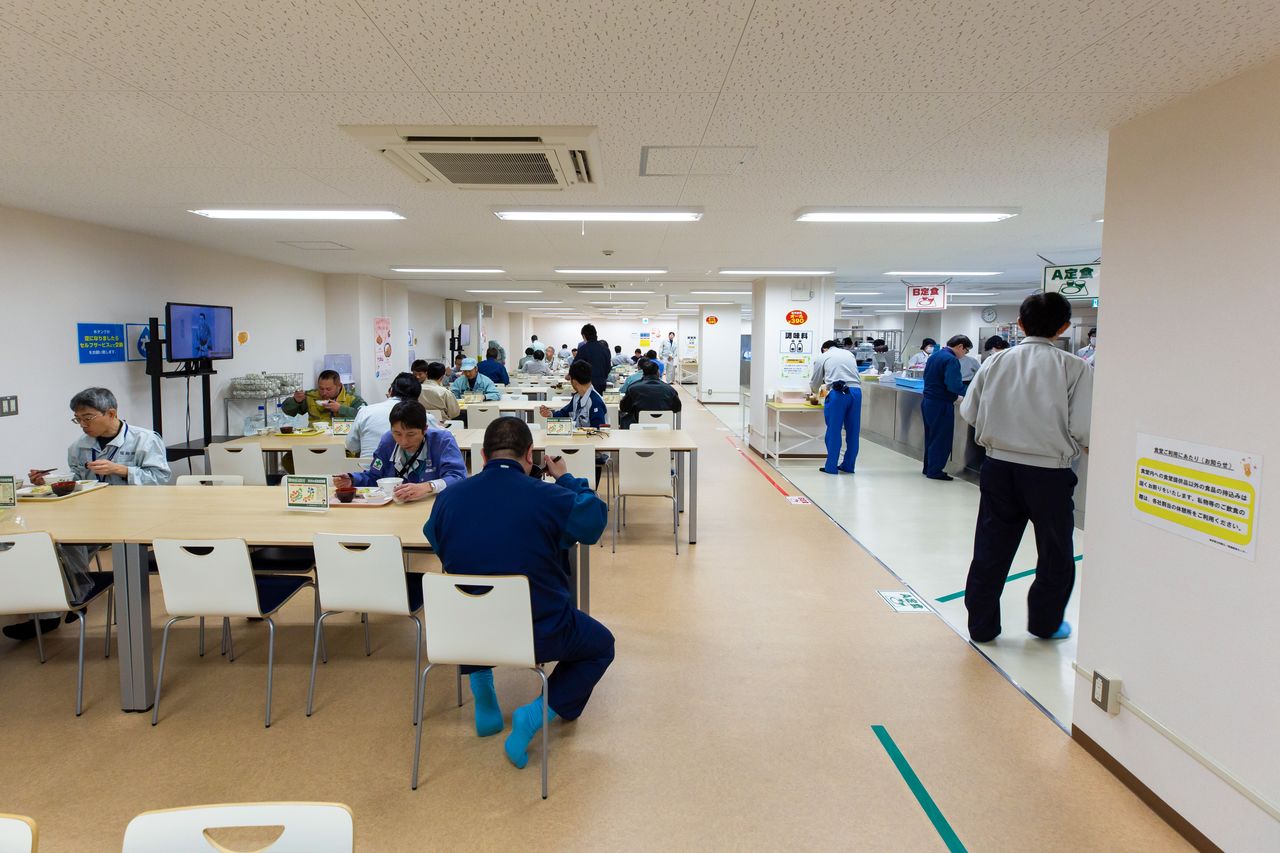 Except for the lack of women workers, the cafeteria looks much like one you’d see in a large company in Tokyo.

Fukushima Daiichi being in a remote location with no inhabited communities nearby, the workers do not have the option of stepping out to dine in a restaurant for a change of pace. The cafeteria staff do their best to keep people from tiring of the menu choices, though. Even for the single “curry and rice” option, the kitchen crew switch things up, using different roux types, using chicken on one day and pork the next, and offering different toppings for the dish. On February 13, when we visited, a poster on the wall was advertising the next day’s special “Valentine’s curry,” complete with a heart-shaped croquette on top. This is a one-of-a-kind worksite and the tasks the people here perform are unlike those handled by other workers, but little touches seen here and there seek to create an environment much the same as that experienced in the rest of the country. 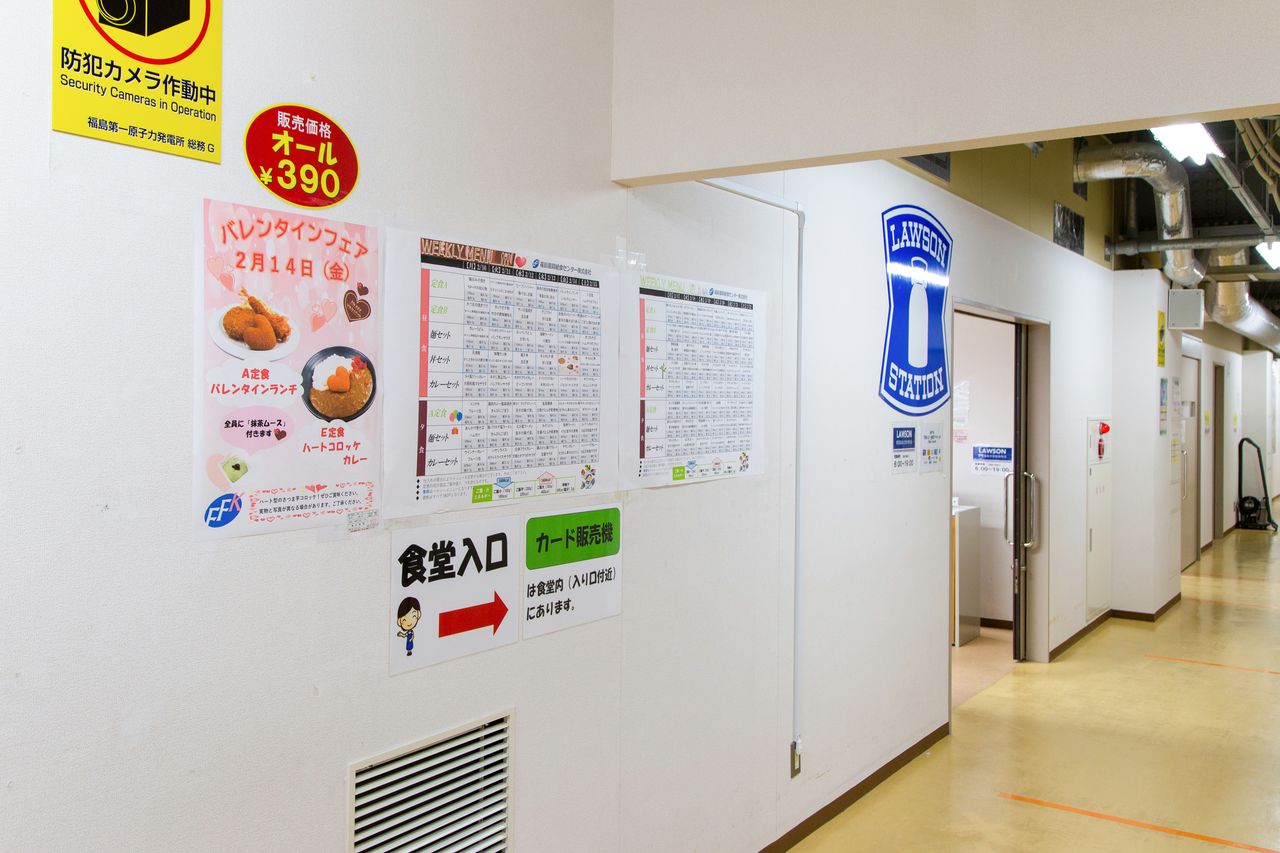 Posters on the cafeteria wall show the daily and special holiday menu options. Workers who want something extra to eat or drink head to the Lawson convenience store located right next door. 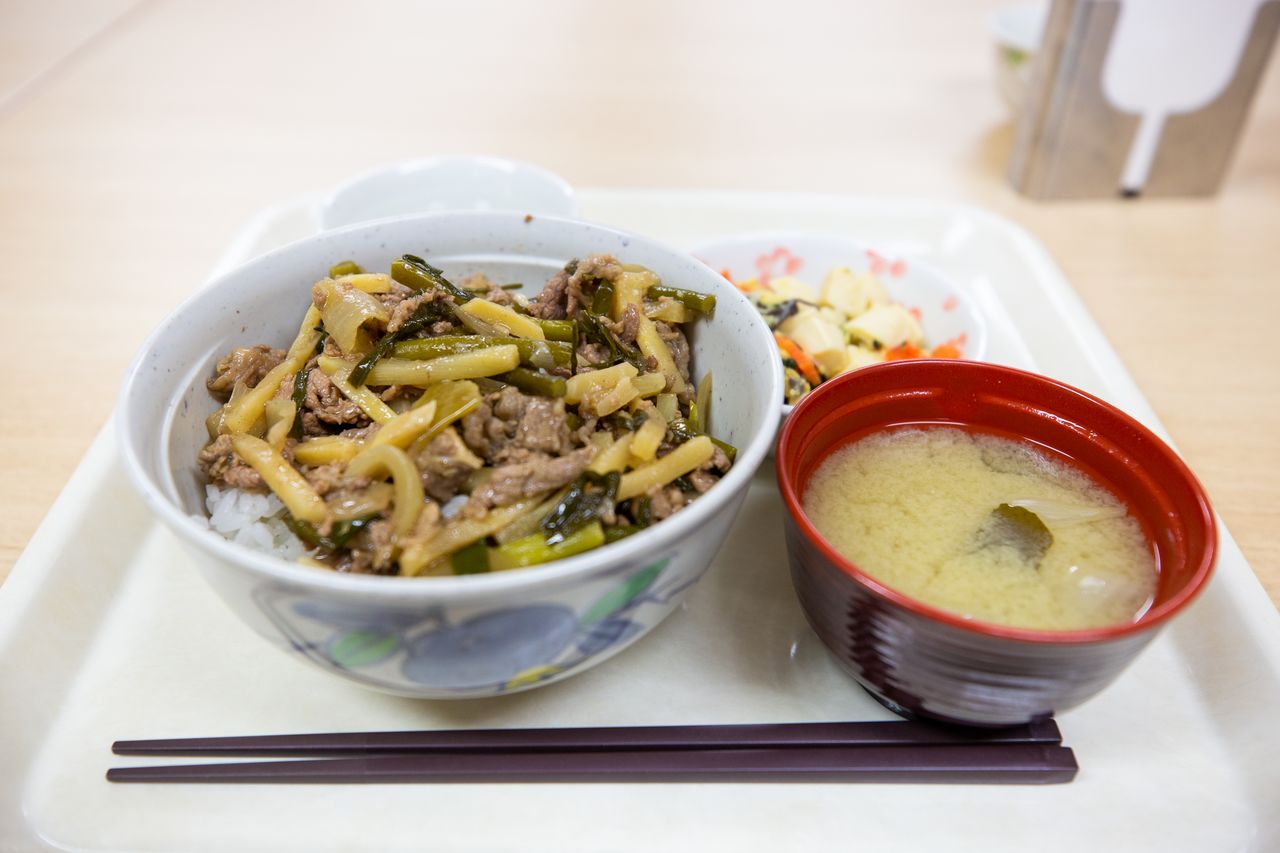 At just ¥390, like all choices on the lunch menu, the sutamina-don—fried meat and vegetables on rice, with salad and miso soup—fuels Fukushima Daiichi’s workers for an afternoon of labor.

Everyone here works at the same site, but the social dynamics are very different depending on the group. At one cafeteria table there may be four or five men eating together in silence, bringing their chopsticks to their mouths without a word to one another. At another table, meanwhile, a different group will be refilling their tea cups again and again, chatting at length after the meal. Here or there is a diner with his eyes glued to a smartphone in one hand while he eats with the other. This, too, is the sort of sight we can see at any eatery in the capital, but when we applied for a press pass to tour the facilities we were told repeatedly that no smartphones or other mobile devices were allowed inside Fukushima Daiichi. Our own phones are locked in the car out in the visitor parking lot.

Are workers on site allowed to carry smartphones? “Yes,” replies the TEPCO officer guiding us around. “Look, I have mine with me now,” he adds, pulling his phone from a pocket to show us. The device ban is aimed at preventing filming and photography inside the site, to keep information from leaking outside, he explains. Workers who bring in their own phones must register them in advance and apply stickers to disable the cameras, but they remain free to enjoy a downloaded video or to text-chat with family and friends during their down time. 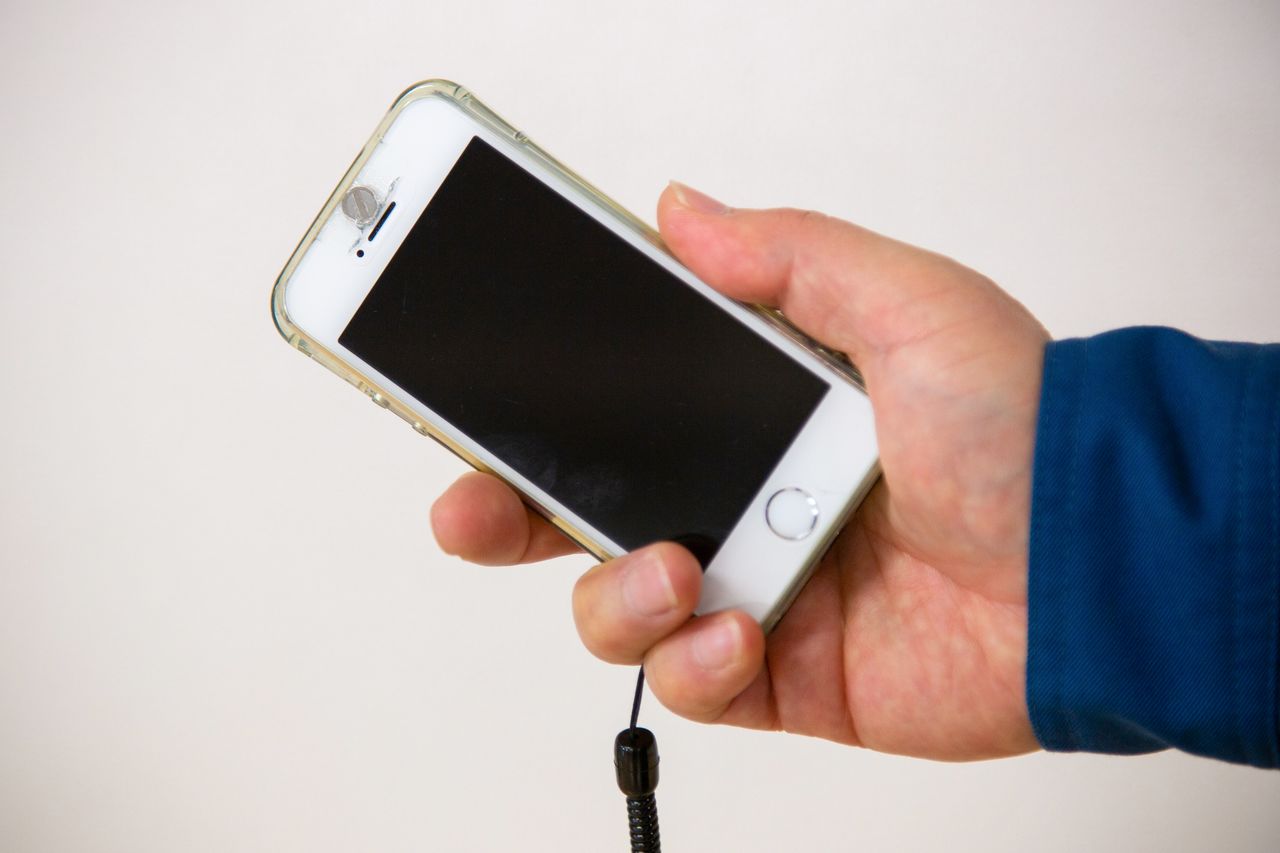 On-site workers can bring in their own smartphones, but must cover their camera lenses with stickers to maintain site security.

Both before and after our tour of the power station, we underwent testing in a “whole body counter,” a device that externally gauges the level of radioactivity in a person’s body. People working onsite must get tested once every three months, but temporary visitors like us get two of these tests in a single day.

Given the content of our tour, though, I wondered at first why this was necessary. We entered no areas where the radioactivity was high enough to require us to wear special protective gear, and we had scrupulously followed our guide’s instructions, donning masks whenever we were in a place where the work was kicking up clouds of dust. But we had passed relatively near to Units 1 through 4, which housed the stricken reactors; there may have been some effect on us there. So it was with a heavy heart that I reported for my second test of the day—but when the results came back, they were almost anticlimactic. My radiation count was even lower than it had been in the morning.

As I was wondering why this had happened, our guide spoke up to explain. “You used the restroom a bit ago, right? Every day, we all ingest radioemitters as part of our meals, and then they get removed from our bodies through the digestive process. Our dietary habits have an impact on our readings. It’s case by case, to be sure, but generally speaking, Japanese people, who eat more seaweed, have higher readings than Westerners.” 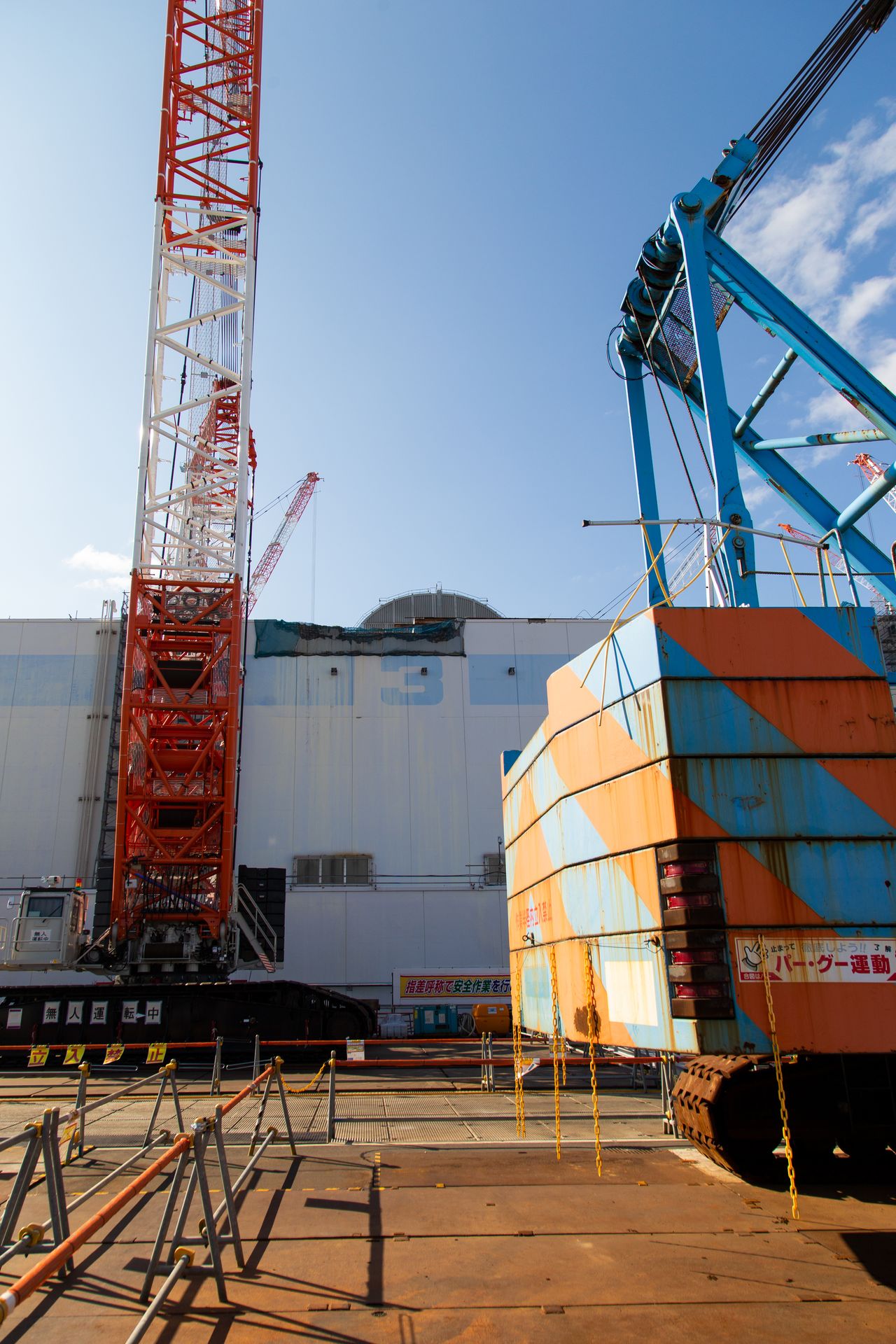 The worksite on the ocean-facing side of Unit 3. Dust masks are a standard part of gear worn by workers and visitors in areas like this. 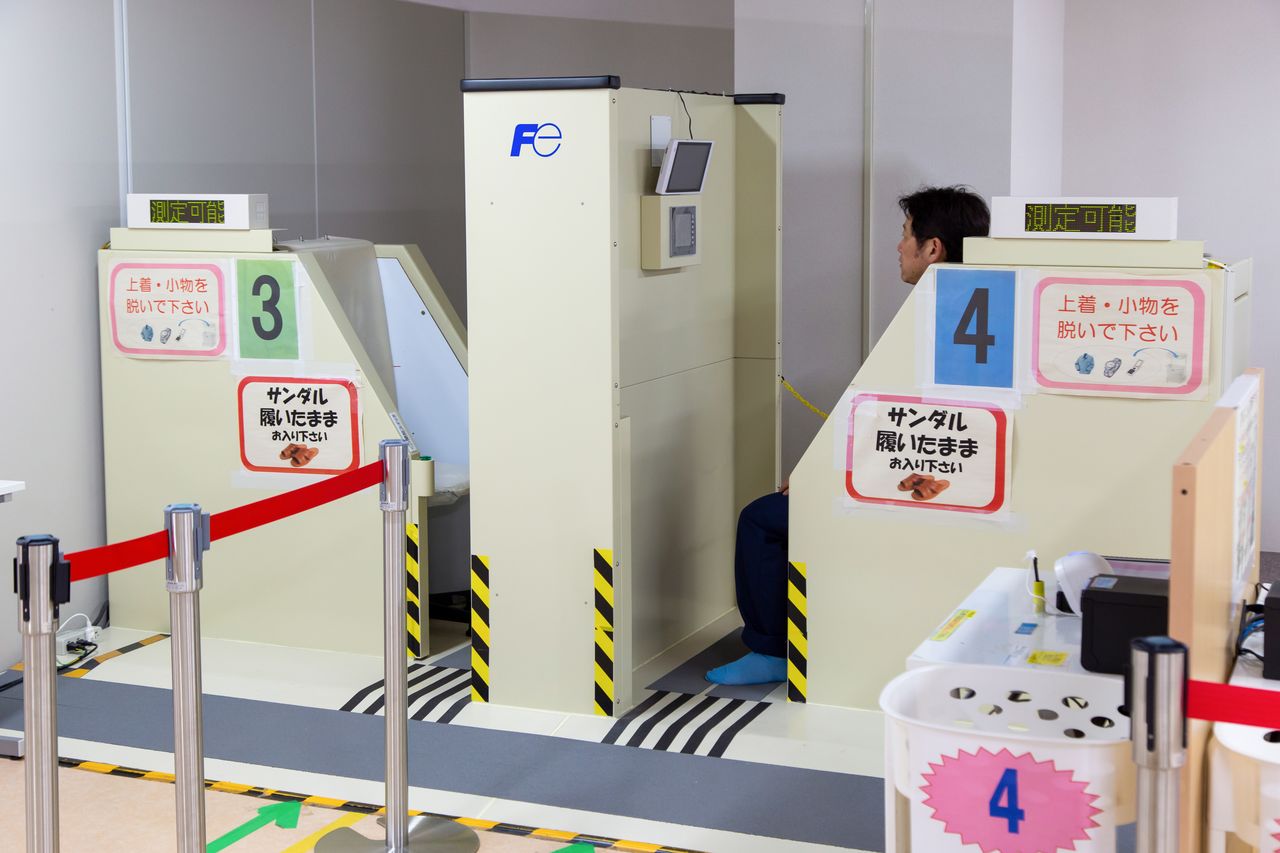 The “whole body counter” takes about a minute to scan a person’s body and provide a count of its internal radioactivity level. 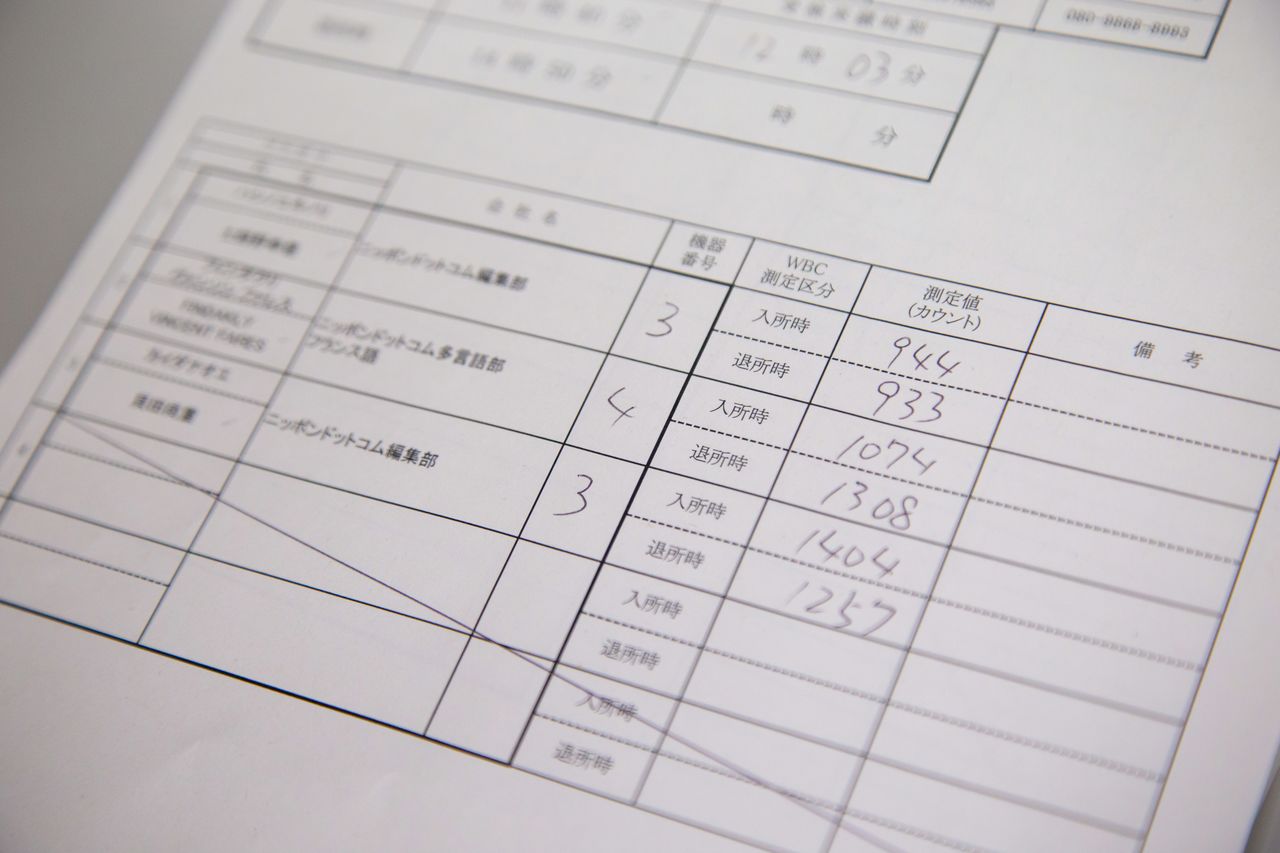 The results sheet for our team members’ radiation tests. The author, third on the list, saw her figure drop from 1,404 to 1,257 over the course of the day; her numbers are higher than the others’ perhaps due to her love of seaweed.

Outside the Gates, an Abandoned Community

On the first floor of the administrative structure on the southwest side of the site is a convenience store, as well as a space with tables and chairs dotting the floor at random intervals. Workers can use this area for impromptu meetings. At the back of this hall is the only smoking area in the entire power station. As a nonsmoker, I ordinarily try to seat myself as far away from such spaces as I can to avoid the smell, but here I somehow find myself happy that the cigarette smokers among the workers have this spot to indulge in their habit. 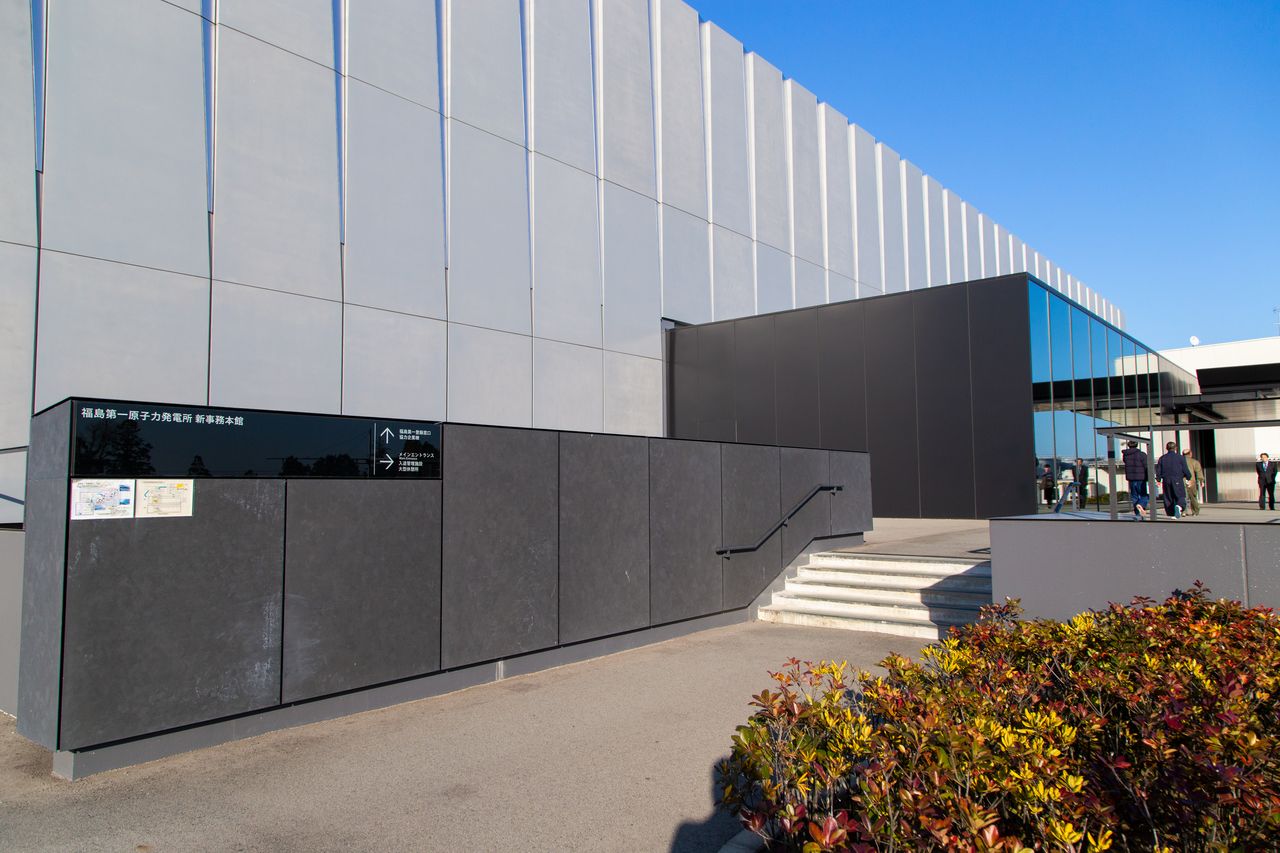 The new administration building at Fukushima Daiichi includes a first-floor space with plenty of natural light from the skylights in its ceiling, providing a comfortable, relaxing place for the workers.

After we wrapped up our reporting, we piled back into the car and headed for our hotel. Radiation levels remain high in the areas surrounding the power station, and many of them remain designated as areas whose residents will not be able to return home for some time to come. The roads we drive along and the trees that line them—perhaps because these routes have seen so much traffic to and from Fukushima Daiichi—look to be in a state of fairly good upkeep. But the communities just off of these roads have been abandoned for nine years, and look like it. We pass a Shimamura outlet, a casual clothing chain store, and glimpse through its show windows the odd mannequin standing among racks of clothing still on the hangers. 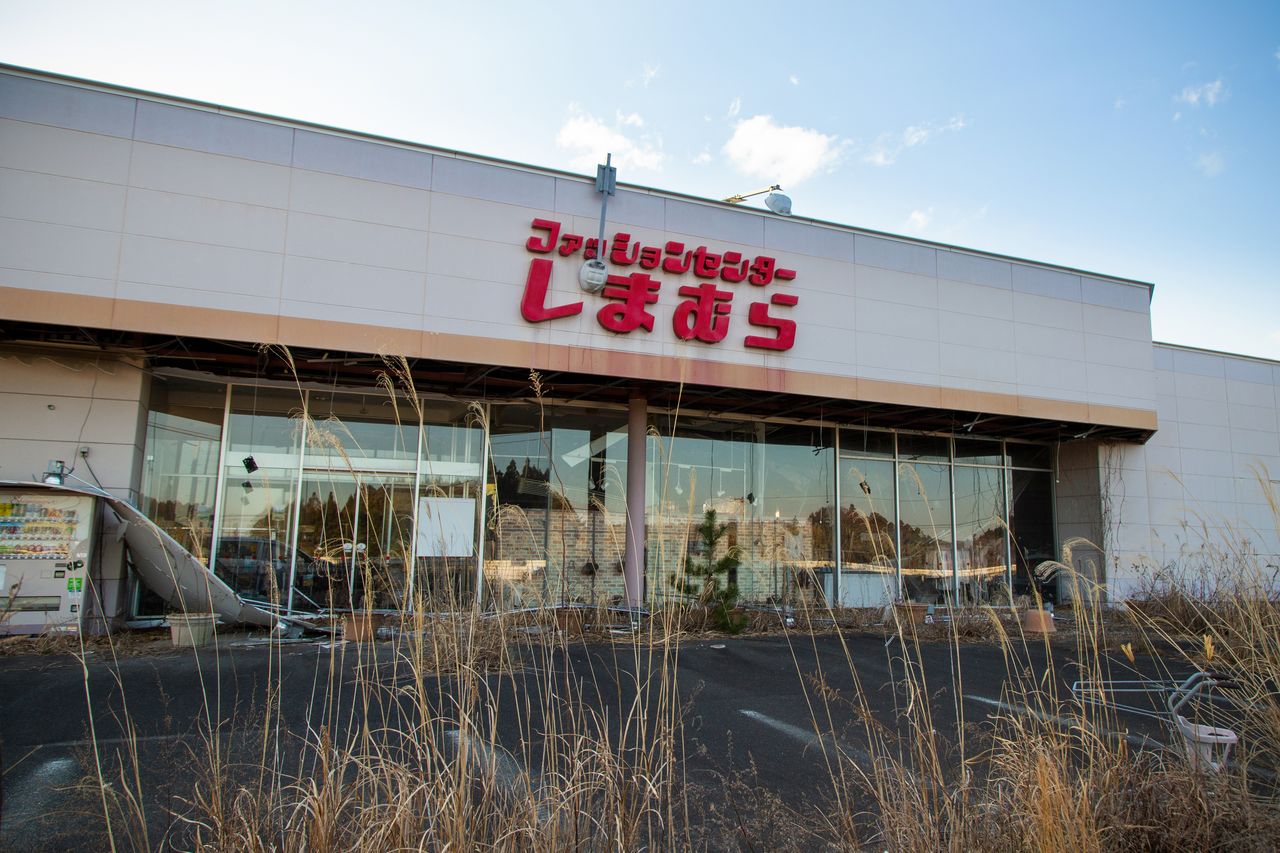 A local clothes store has seen no customers since 3/11, but still has items hanging on the racks, untouched for almost a decade. 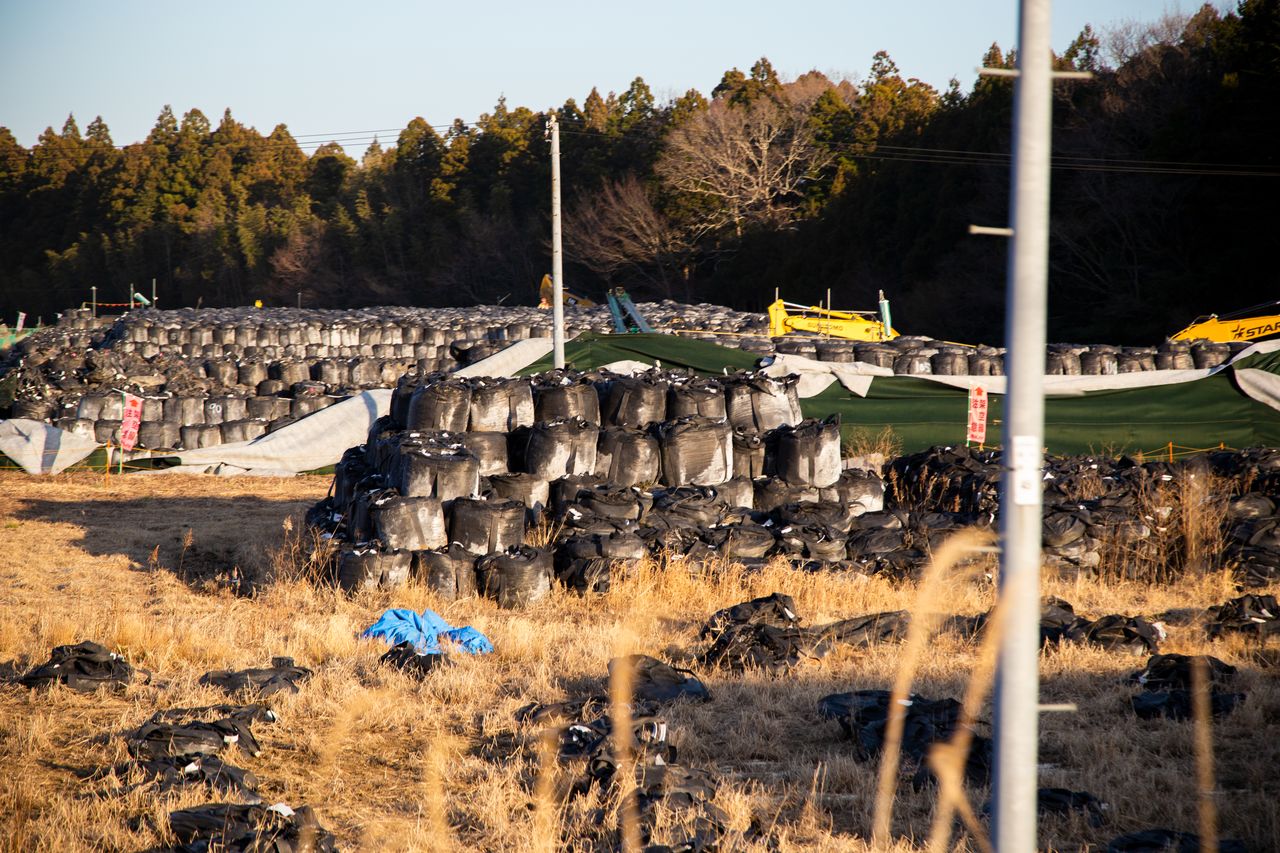 Across the road from the Shimamura stand mounds of bagged topsoil, collected as part of decontamination efforts.