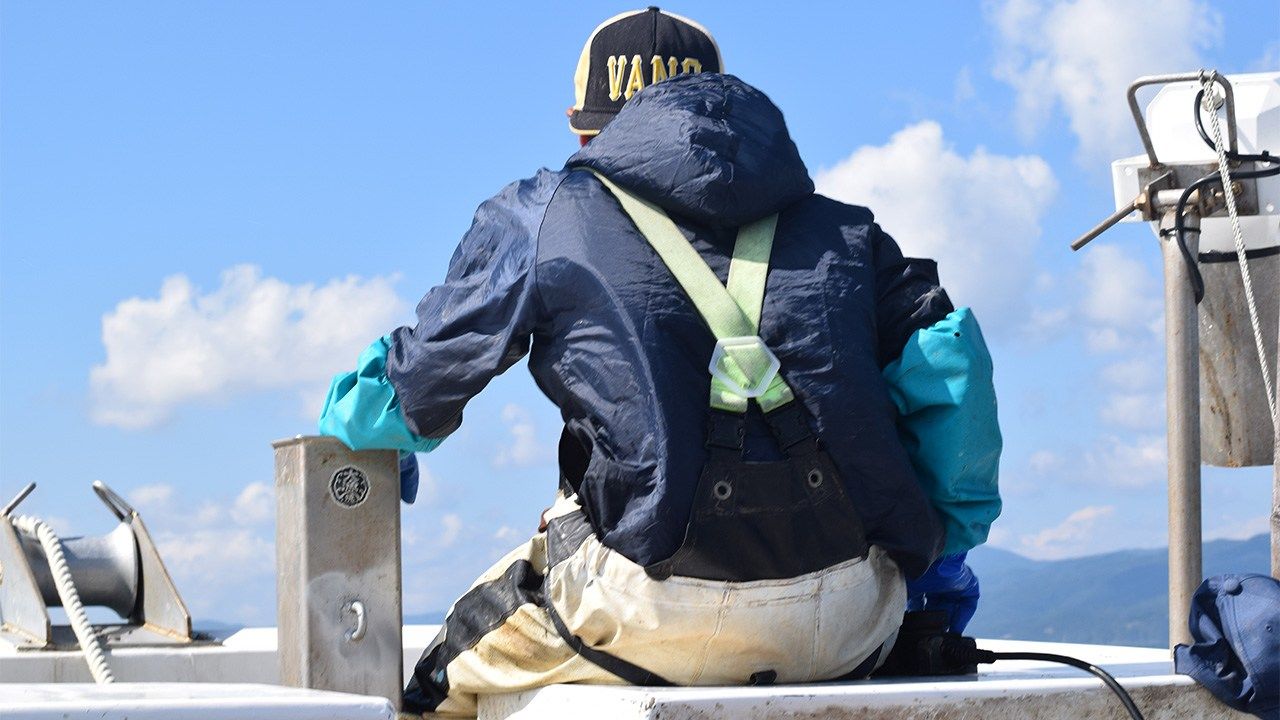 A Fisherman in the Time of the Coronavirus

Society Economy Lifestyle Work Food and Drink May 19, 2020
A fisherman from Miyagi Prefecture writes of how the drop in the price of fish during the coronavirus crisis has led him to take a break from going out to sea.

This coronavirus is unbelievable. Nobody’s catching any fish in Japan, but even so, they’re selling for next to nothing.

I’m a fisherman from a village in Miyagi Prefecture. Every day you hear reports that Japan’s “entering a crucial stage in the fight against COVID-19.” It’s the same for the fishing industry. Of course, we’re taking the same actions as everyone else against the coronavirus, but we have our own problems too: meager hauls and plummeting fish prices.

People in Japan have probably seen TV or newspaper reports about low stocks of autumn chum salmon, bluefin tuna, or Akashi octopuses. Poor catches are not just a problem for Miyagi—they’re nationwide, and they affect every kind of fish and seafood.

I make all sorts of seasonal catches through the year—mainly autumn chum salmon, but also conger eels, Pacific cod, red sea bream, olive flounders, sea squirts, Kinka mackerel, Spanish mackerel, common octopuses, giant Pacific octopuses, crabs . . . in fact, so many I can’t write them all down. These are really fertile fishing grounds. Or maybe I should say they were really fertile fishing grounds. 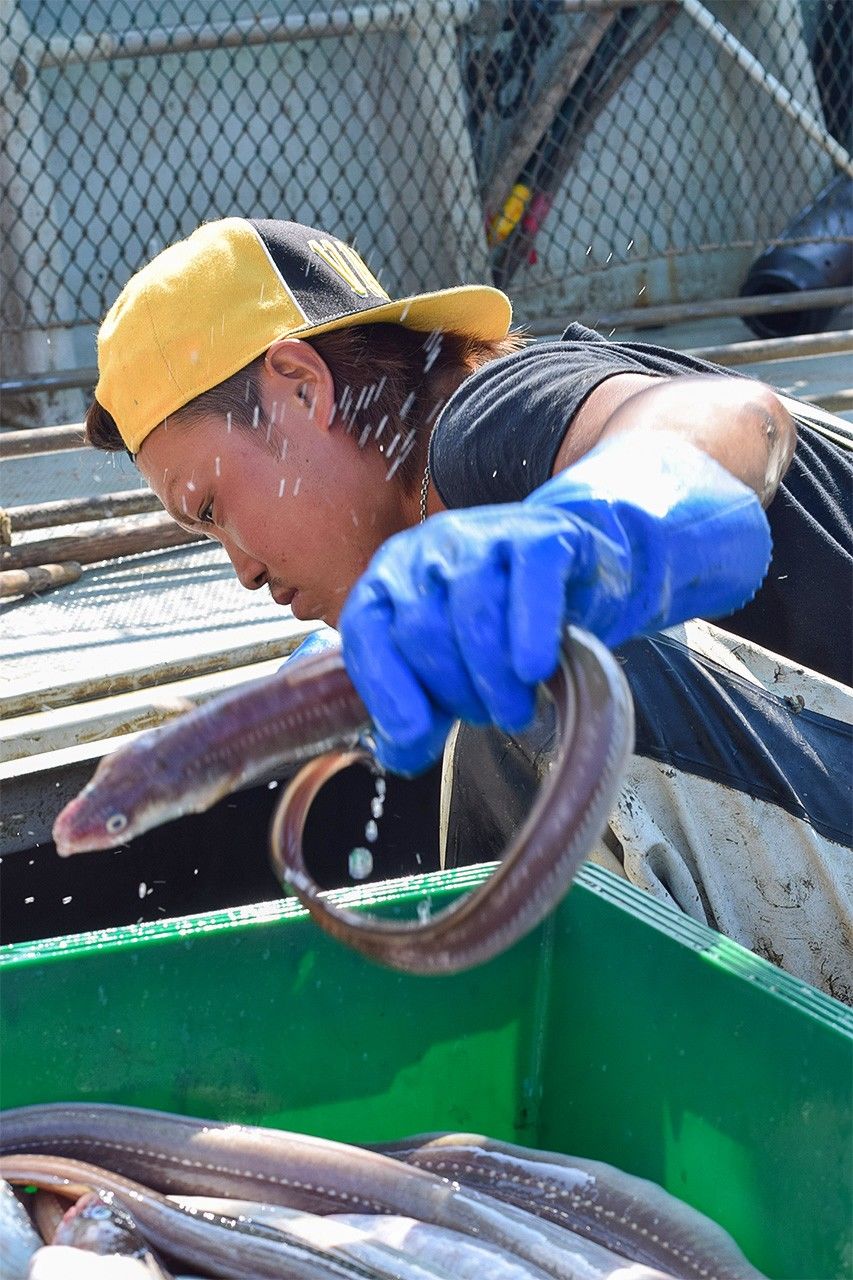 The author at work. (© Yamashita Yūto)

Poor catches aren’t a new thing. My main fish—the autumn chum salmon—have almost disappeared over the past three or four years. Autumn 2019 was hopeless. Unfortunately, the catches for summer conger eels and winter octopuses were second rate too. Even if I don’t bring in much, though, so far I’ve always got by somehow.

Roughly speaking, usually when you don’t catch many fish, supply to the market also drops, so naturally prices go up. The price rise covers the shortfall in the catch, so sales and income turn out reasonably OK. 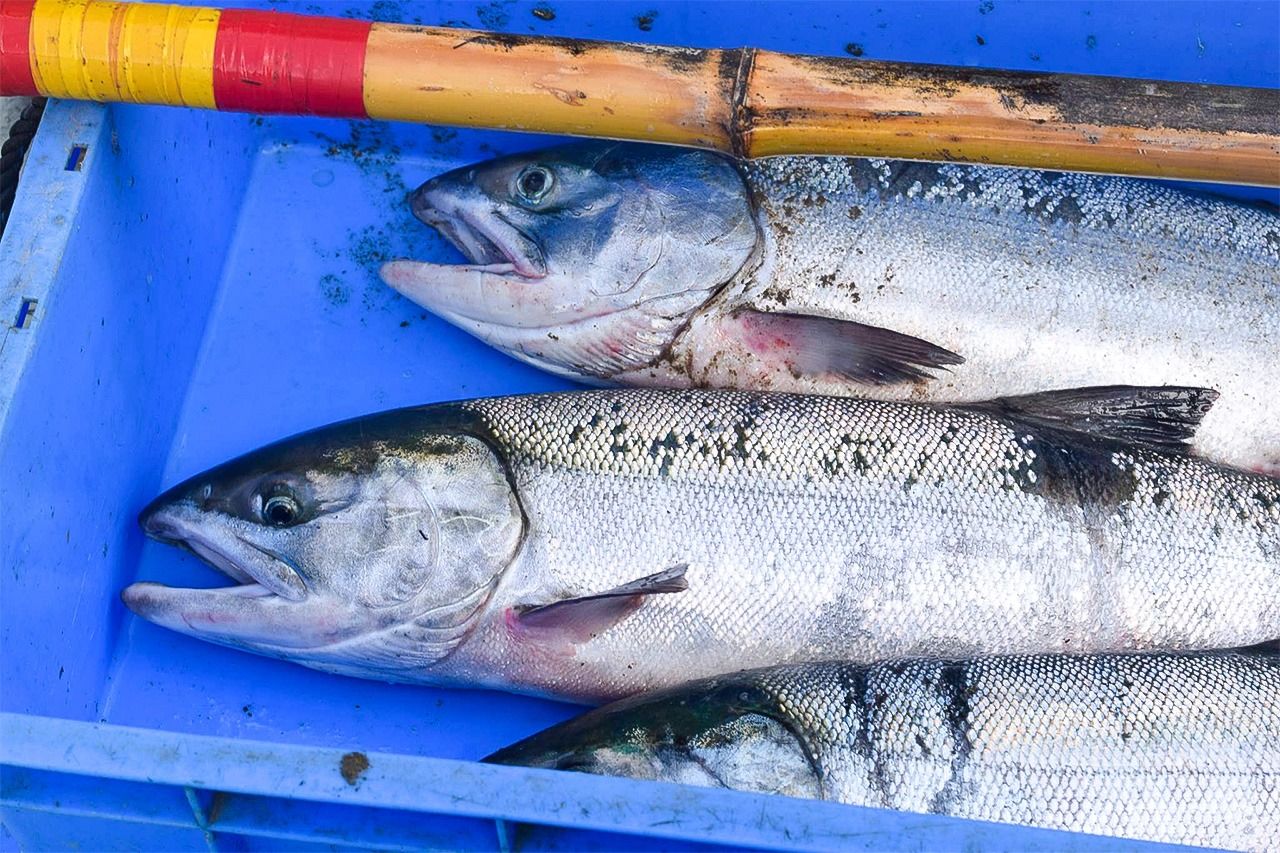 At the same time, when you get a good catch, supply to the market also goes up, so prices fall. In this case the large catch covers the price drop. This is the basic idea.

On this basis, when catches are low now, does that mean fish prices go up? Or down?

The answer is “They go up.”

Correct! In a typical year, anyway. But this year, prices are astonishingly low. Just stupidly low, when fish are so scarce.

At the start of the year, when I heard about patients with mysterious cases of pneumonia in Wuhan, China, I didn’t think much of it. “A novel coronavirus? What’s that?” I didn’t know corona would spread as much as it has. Even when things were getting worse each day in China, I didn’t take it seriously. “Well, it won’t come to Japan,” I thought. I didn’t realize it would end up spreading all over the world.

High-Quality Fish in the Supermarket

My fishing boat has become known over the past few years for catches of red sea bream, and brokers and cooks have told me they’re the best in Japan. 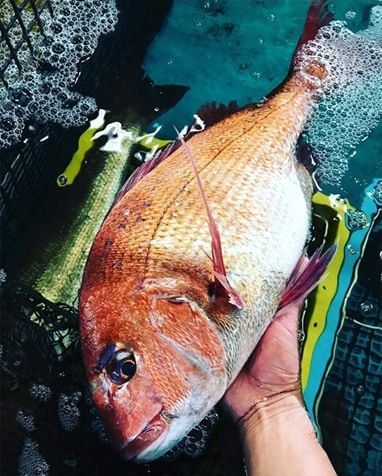 The other day I went to get some food at the supermarket. I always take a look at the seafood section to see what’s being caught and how much it’s selling for. It’s partly a market survey, but it’s also a fun thing for me about going to the supermarket. “Even when I’m not at sea, I can see the fish’s faces.”

That day, I found a huge red sea bream that had been caught wild. And it was a fine fat specimen too. I was thinking it must cost at least ¥10,000, but probably more like ¥20,000, so I was shocked when I approached and saw the price tag. I needed to knock a zero off my guess to get close. I couldn’t believe my eyes. This big, high quality red sea bream was going for ¥900. That wasn’t the price for 100 grams—it was for the whole fish. There was also a wild-caught winter yellowtail weighing in at around 10 kilograms. This was another good fish with a high fat content, but it cost just over ¥2,000.

I’d been trying not to leave the house, so it made me slow to catch on. If this is what it’s come to . . . if this is the retail price, then how much did the people who caught it get? This is just too much of a bargain! It’s too harsh on the fishermen.

But I’m not writing this article to tell you how hard the fishing industry has it and plead for help. 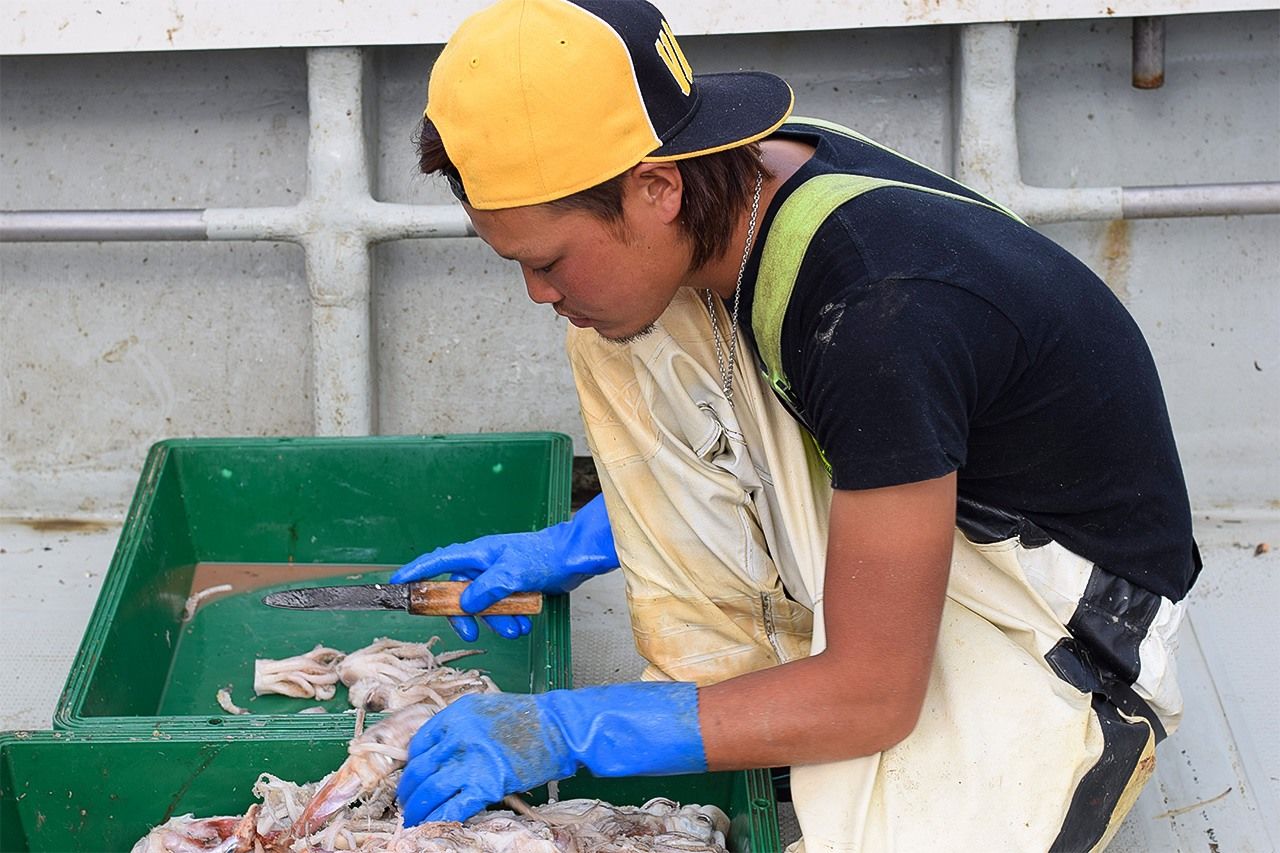 The coronavirus has brought down the prices of both fish and meat. With the calls to avoid unnecessary trips outside to stop the disease spreading, a lot of restaurants have stopped opening—and even if they’re open, demand has collapsed for big-spending parties and business hospitality, so in extreme cases the fish being caught have nowhere to go now. The high-end seafood that would usually go to the top restaurants has started appearing in supermarkets at discount prices.

A friend in Yokohama said to me, “The news said that fish prices have plummeted, but they cost the same in my local supermarket.” I’m guessing, though, that even if prices are the same, the quality of the fish has probably gone up.

For ordinary shoppers, there’s the chance to buy fine fish at low prices. Why not enjoy a little luxury if you see it in stores or sold by mail order? People are trying not to leave the house without reason, and it’s easy to get bored or feel stressed at always being at home. I’d like people in Japan to try making something a little fancy with some good fish or meat. It’s fun to plan, cook, eat, and keep the family happy. You can treat yourself while leading the quiet life. Give it a shot sometime.

Having said all that, I’m going to take a break from fishing. The way I see it, there’s no need to go out of my way to catch fish with the prices in such a slump.

There are lots of people fishing around the country. They all work in different environments and circumstances. There must certainly be some who aim to keep on bringing in catches and selling them for the highest price possible. And I know there are captains who are giving their all just to make sure they can pay their crew members’ wages.

Everyone has to make their own decisions, and there are no right answers. Each person’s decisions should be respected. And this difficult time is not the moment for looking for squabbles or people to blame.

But, as I’ve been given this opportunity, I want to write my personal opinion.

I’m choosing to stop fishing. This is because I think it’s important to give fish a chance to swim free rather than catch them when prices are at rock bottom. Leave them to grow and they’ll bring a better price and spawn another generation of fish. It’d be wonderful if the stocks recovered.

Throughout the year, I only fish in the grounds by my village. I think of the fish there as a kind of treasure. My job as a fisherman is to take the lives of the fish that are my treasure. So I don’t want to sell them cheaply.

If you fished for a living, would you prefer to sell 100 fish for ¥10,000, or just one for the same price? I’d pick the second way. I think it’s reasonable not to catch when the price is low.

Lots of people think that fishermen do all their work at sea, but the fact is there’s plenty of work to do on land too. While I’m not catching fish, I’ll be getting ready to go out again, mending the nets and making equipment. You need different gear for the different kinds of fish and seafood you catch through the seasons. I’ll still go out fishing enough for my own needs, but I’m going to hold back on anything beyond that for the moment and focus on my shore work.

Fishermen aren’t the only ones struggling. Look at the news and you see how the pandemic’s affecting people in all kinds of jobs. Still, it’s better than a war or a tsunami. Let’s get through this. 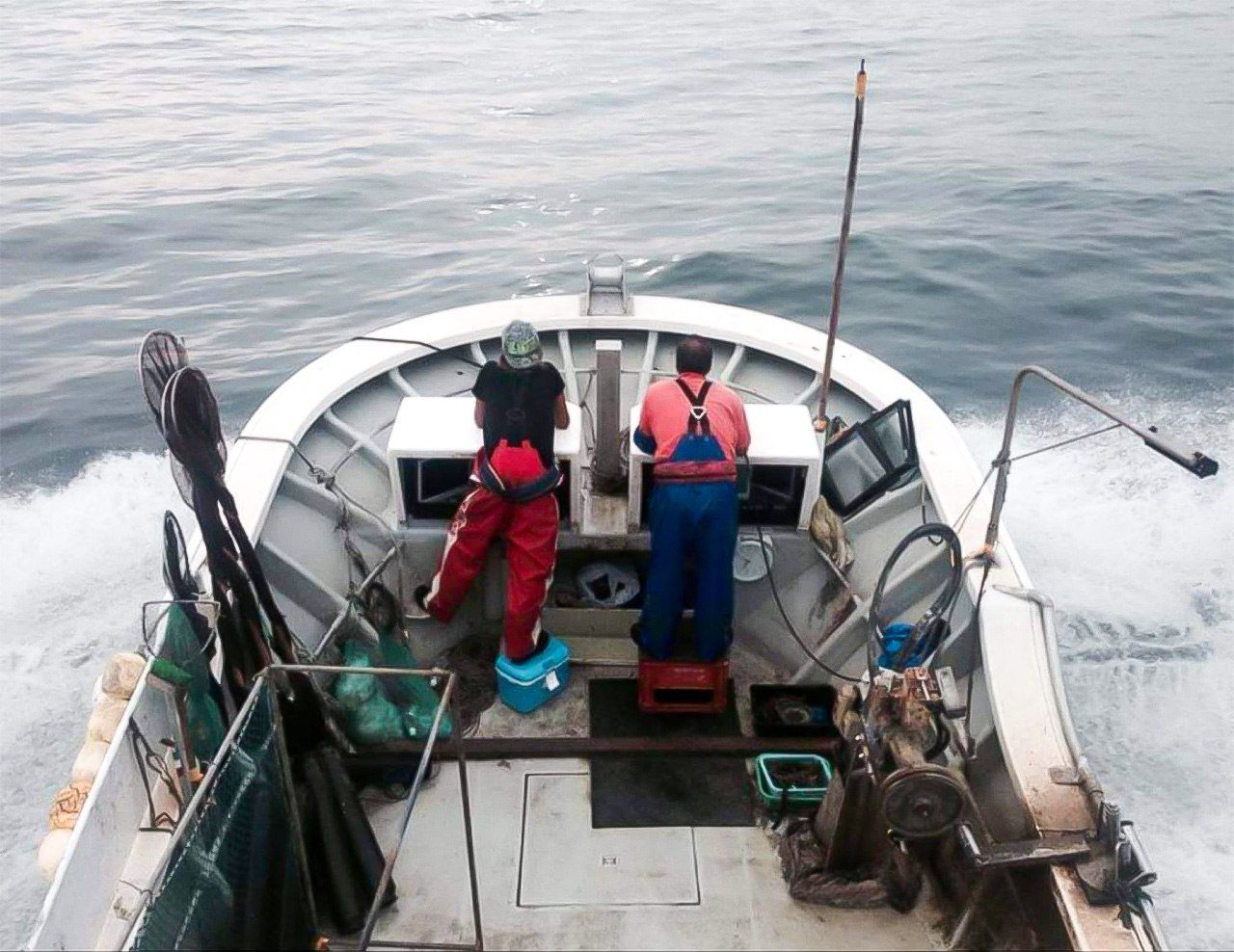