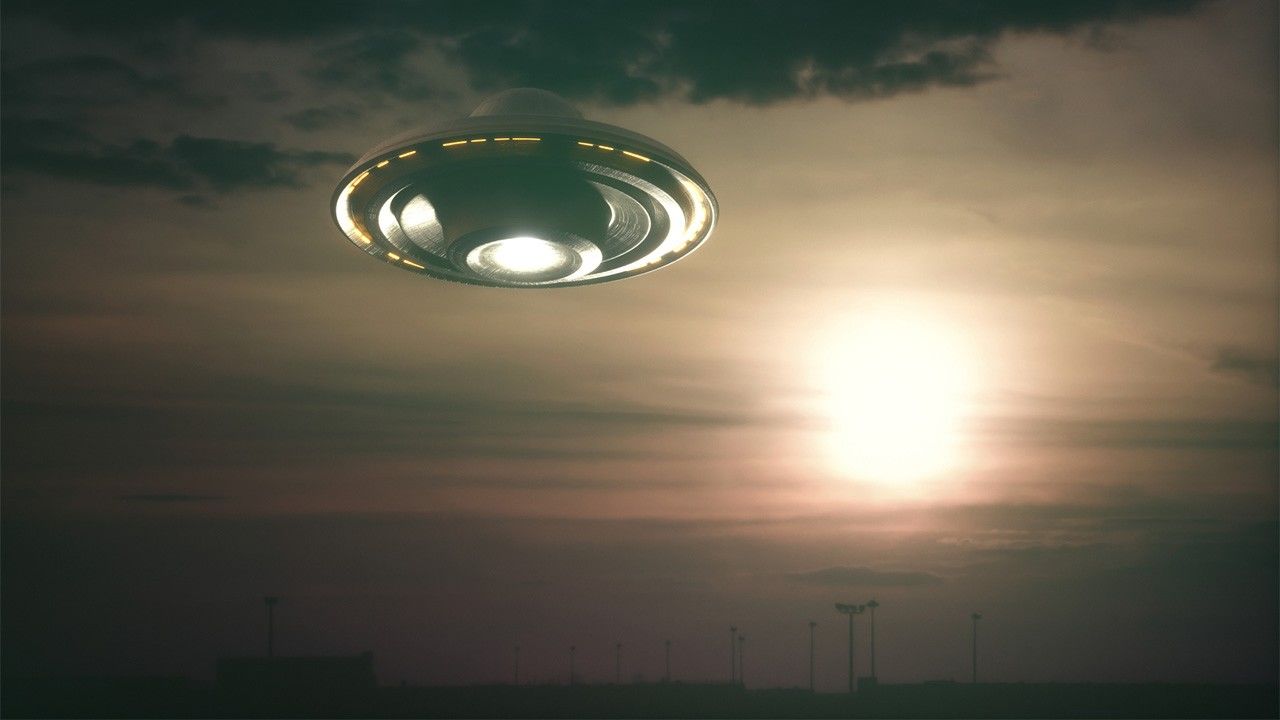 Watching the Skies in Japan: Mishima Yukio and Other UFO Enthusiasts

Culture Society Science Jun 24, 2020
Mishima Yukio was among the famous members of the Japan Flying Saucer Research Association, founded by Arai Kin’ichi in 1955 to research and discuss UFOs.

Mishima and the Flying Saucers

“Summer, the season of flying saucers, is almost here. Last summer, I took my binoculars to Atami Hotel and watched the skies every single night in the hope of seeing so-called UFOs coming in to land. Yet in the end, I was not fortunate enough to witness such an event.”

This is the opening of an essay that author Mishima Yukio wrote in 1957 for Uchūki (Spacecraft), the official publication of the Japan Flying Saucer Research Association (JFSA). Mishima, who yearned to see an alien spaceship, joined the organization the year after it was founded in 1955 by Arai Kin’ichi, a UFO trailblazer in Japan. The JFSA had more than 1,000 members at one point, and Mishima was not its only famous face. Others included the writers Hoshi Shin’ichi, Ishihara Shintarō, and Nitta Jirō; the rocketry pioneer Itokawa Hideo; and the composer Mayuzumi Toshirō. In June 1957, Mishima took part in an observation event in Hibiya, Tokyo, and later that summer he searched for UFOs during a trip to the United States. Arai wrote in an article that Mishima was an enthusiastic member of the association and always showed up to events with a huge telescope. 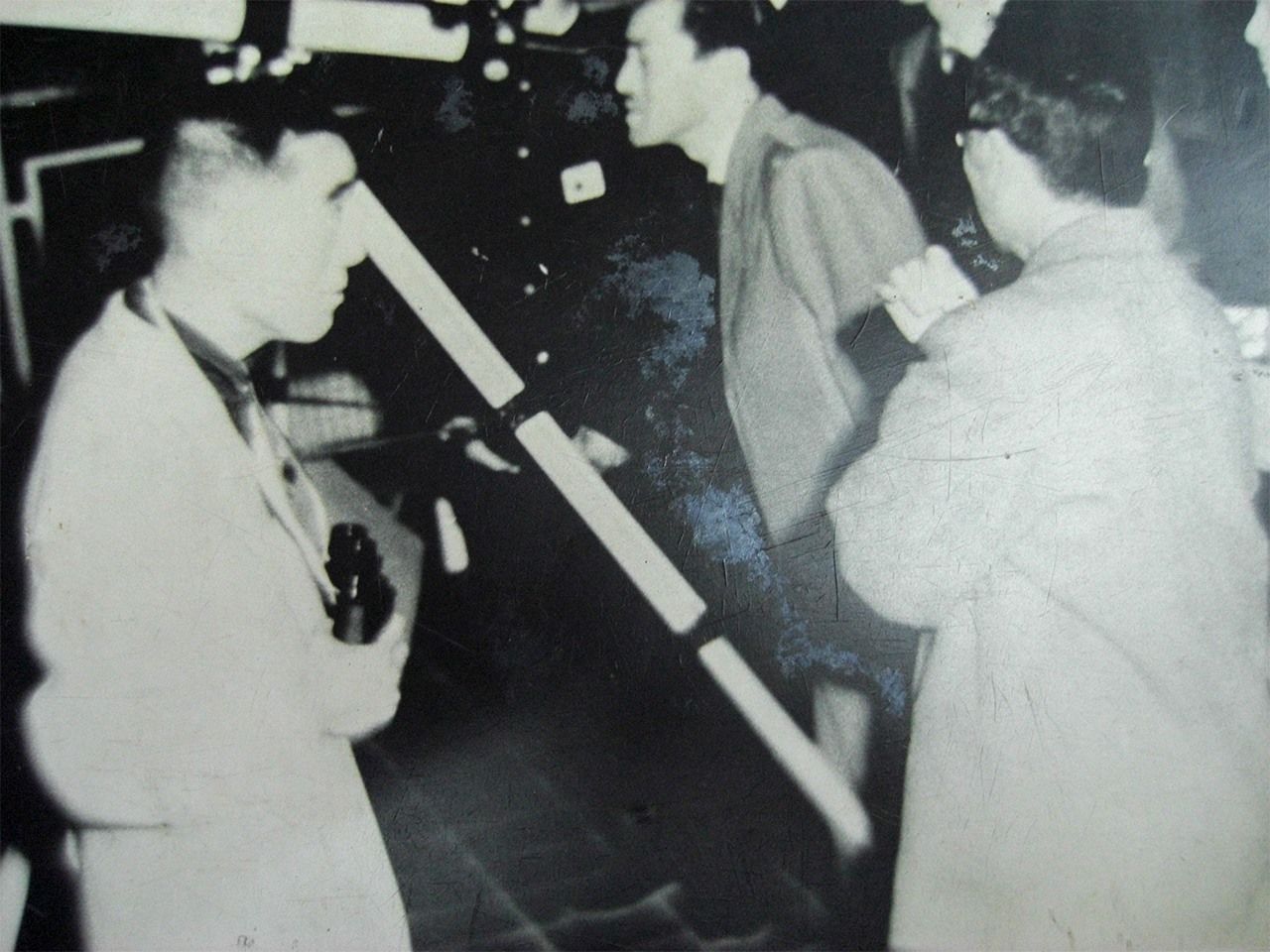 Mishima wrote an article for the magazine Fujin kurabu (Women’s Club) about a cigar-shaped UFO-like object he witnessed with his wife from the top of his home in Ōta, Tokyo, on May 23, 1960. In his novel Utsukushii hoshi (A Beautiful Star), published two years later, the members of a family of four who each witness a flying saucer discover that they are all from different planets: Mars, Jupiter, Mercury, and Venus. They strive to build up the peace movement to save humanity from annihilation and nuclear war, while facing an antagonistic group of aliens seeking to wipe people out. This uncharacteristic work reflects Mishima’s fascination with UFOs and aliens.

However, Mishima was never convinced he had actually seen a UFO. In a tribute in the Asahi Shimbun to the playwright and fellow flying saucer enthusiast Kitamura Komatsu after his death in 1964, Mishima wrote, “While I wasn’t able to see a flying saucer in the end, I enjoyed the more valuable experience of pure friendship.”

Even so, Mishima believed that UFOs existed. Arai, the JFSA head, was similarly certain that they were real, despite not having seen them himself, and toiled steadily to gather information about them. Arai was born in Tokyo in 1923 and worked with airborne radar in the Army Air Service during World War II. He had a longstanding interest in weather and astronomical observation, as well as aircraft. After a postwar spell in the Ministry of Finance, he ran a bookshop in Shinagawa, Tokyo, and read widely in his fields of interest. He came across the Japanese translation of Flying Saucers Have Landed by George Adamski, which was published in 1954. Adamski claimed to have gone on board a flying saucer that came to land and talked with aliens from Venus. The UFO boom had begun some years earlier with media reports that US businessman Kenneth Arnold had seen nine shining objects flying through the sky while traveling in his plane on June 24, 1947. Arai was immediately interested, although skeptical whether Adamski’s claims could stand up to scientific scrutiny. As these kinds of personal stories and witness accounts steadily continued to emerge, Arai felt there should be a venue for serious discussions of UFOs, which led him to found the JFSA.

The inaugural edition of its official publication included the following passage. “As Japan still has no serious research body for UFOs, they are currently seen as the products of daydreams or hallucinations. Yet it cannot be called absurdly unscientific to investigate whether such objects exist in our vast universe. For even now we, the residents of Earth, are forming plans to journey through the cosmos in the distant future. Thus, our possession of all manner of materials relating to flying saucer reports around the world and debate on their veracity based on today’s superlative space science is, although we are an amateur organization, surely a significant first page in the history of space travel.” 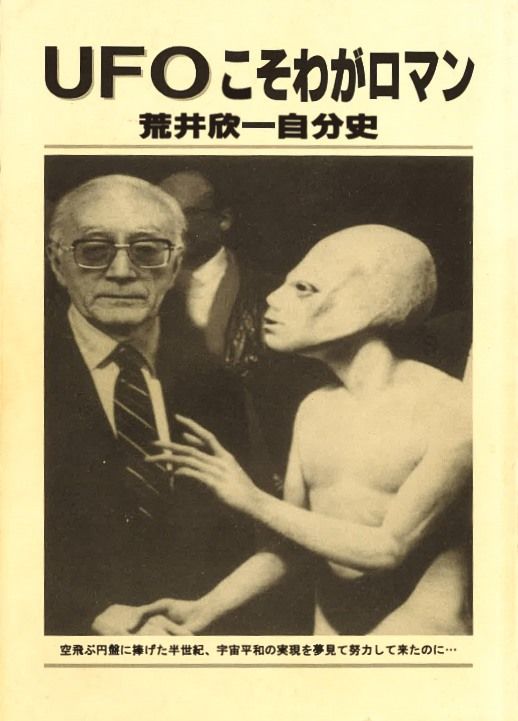 Arai’s ultimate goal was world peace and the protection of humanity’s future. He feared that the Cold War between the Western and Eastern Blocs would lead to another global conflict. In a 1978 interview with the magazine UFO to uchū (UFOs and Space), he commented, “If we knew for certain that there were UFOs watching Earth, like a third party, wouldn’t that bring war to an immediate end?” In 1957, the JFSA marked two years since its founding with a joint statement of “universal peace” with other research groups. It sounded a warning over how the nuclear arms race threatened the future of humanity, while calling for differences between states and races to be overcome in order to make preparations for the coming of flying saucers. The same year, a report in foreign dispatches came that the Soviet Union was planning to launch a rocket to the moon armed with a nuclear weapon. The JFSA handed a document urging the cancelation of its launch to the Soviet ambassador. Mishima’s novel Utsukushii hoshi depicts the writing of a letter calling on the Soviet leader Nikita Khrushchev to stop nuclear testing, which was clearly influenced by the JFSA action.

A UFO Center in Japan 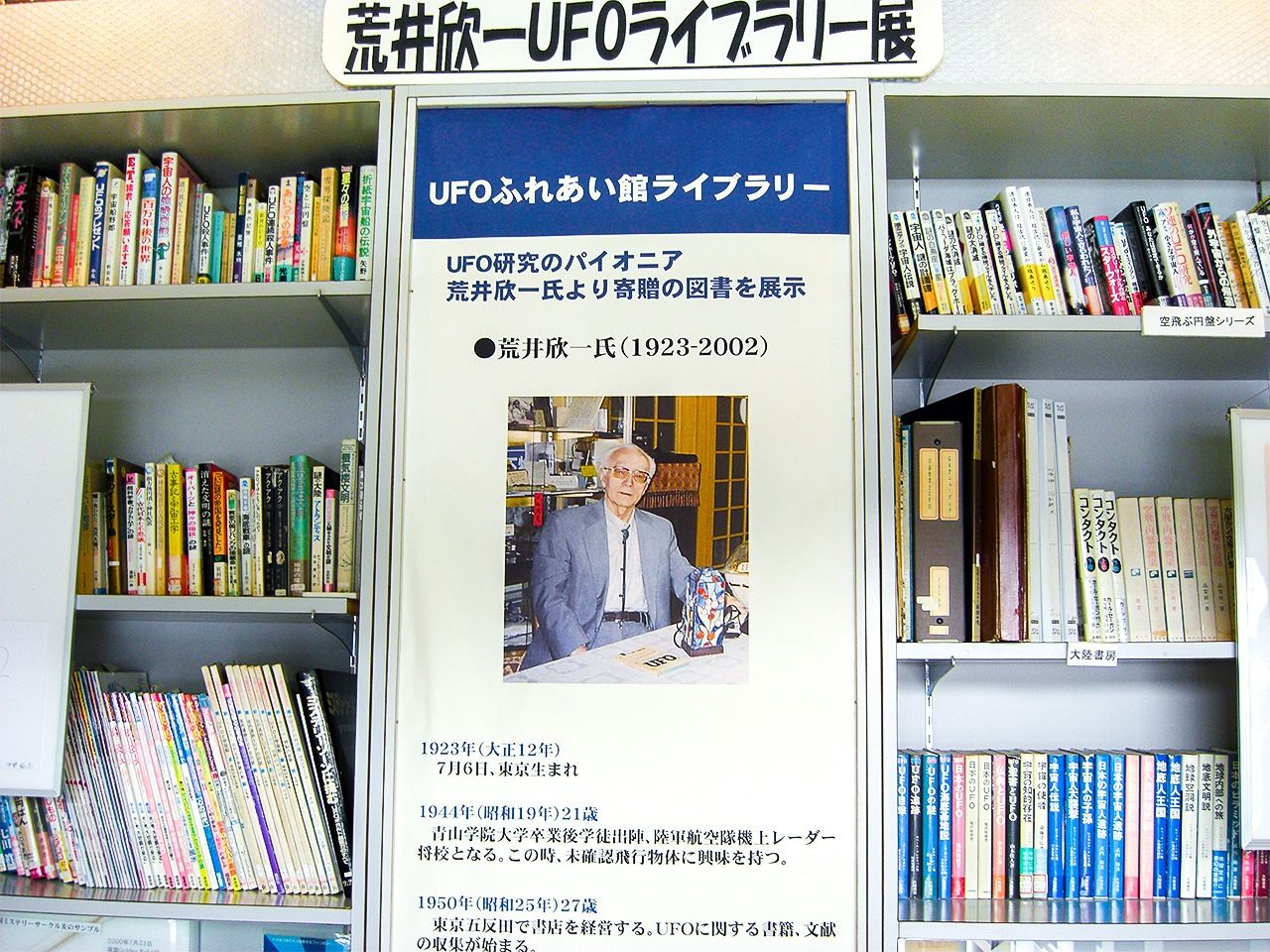 Arai established a UFO library in his company building in Shinagawa, where he displayed the materials he had assembled and made them available for reading. Shortly before his death in April 2002, he donated most of the materials to a museum, the UFO Fureaikan in Fukushima, Fukushima Prefecture. He knew and trusted Kinoshita Tsugio, then the museum director. Kinoshita recalled, “While he was still alive, Arai wanted the materials to be properly organized and looked after. He was a good-natured and serious man. He told me, ‘I’ve never seen a UFO. You’re so lucky to have witnessed them several times.'”

The UFO Fureaikan opened in 1992, funded by one of the ¥100 million grants paid out to municipalities throughout Japan in a government bid to revitalize the regions. It is located on a hill called Senganmori, known for the many sightings of luminous objects in the skies. Kinoshita, a local UFO researcher, was director of the museum from 1993 to 2010.

Senganmori (left) and the view from its 462.5-meter summit. (Courtesy UFO Fureaikan)

The pyramid-shaped Senganmori is said to have a strong magnetic field, and has rocks resembling a whale, an Easter Island moai, and other curious forms. These have led it to be seen as a “power spot.” Kinoshita says there are many witness reports of UFOs within a radius of 30 or 40 kilometers around Senganmori and the city of Fukushima. He says he first encountered one in the summer of 1972, when he was 25, while climbing Minowayama to the west of Senganmori with three friends.

“We were 10 or 15 minutes from the summit. As I took a step forward, I suddenly looked up at the skies and saw a helmet-shaped object floating as if it had been stuck there. It was the oxidized silver color of a one-yen coin and looked around 30 centimeters long. The four of us were dumbfounded for 30 seconds or so. We hurriedly climbed to the summit to view it from a greater height, but when we looked up again it had vanished.”

Kinoshita soon became engrossed in UFO research. He says he has now seen UFOs at least six times. Since retiring from his post as museum director, he has established a place for study next to his home, a short car journey from the Fureaikan. Sometimes visitors come and talk about UFOs or share their own witness accounts. While there are many people who do not believe at all, Kinoshita says it is important to recognize UFOs as potential gateways to advancement. “We don’t know if people really saw UFOs or not. But simply deciding that they must have been mistaken doesn’t allow for them to broaden their interest. If they say they’ve witnessed a UFO, we have to listen carefully. A sighting might inspire someone’s future research in astronomy or energy systems. These are gateways for expanding our world. There are skeptics who ask why they’ve never seen a UFO, but people today rarely look at the sky. If you don’t look up at the sky, you’ll never spot a UFO!”

(Originally written by Kimie Itakura of Nippon.com and published in Japanese. Banner photo © KTSimage/Pixta. With thanks for the cooperation of UFO Fureaikan.)