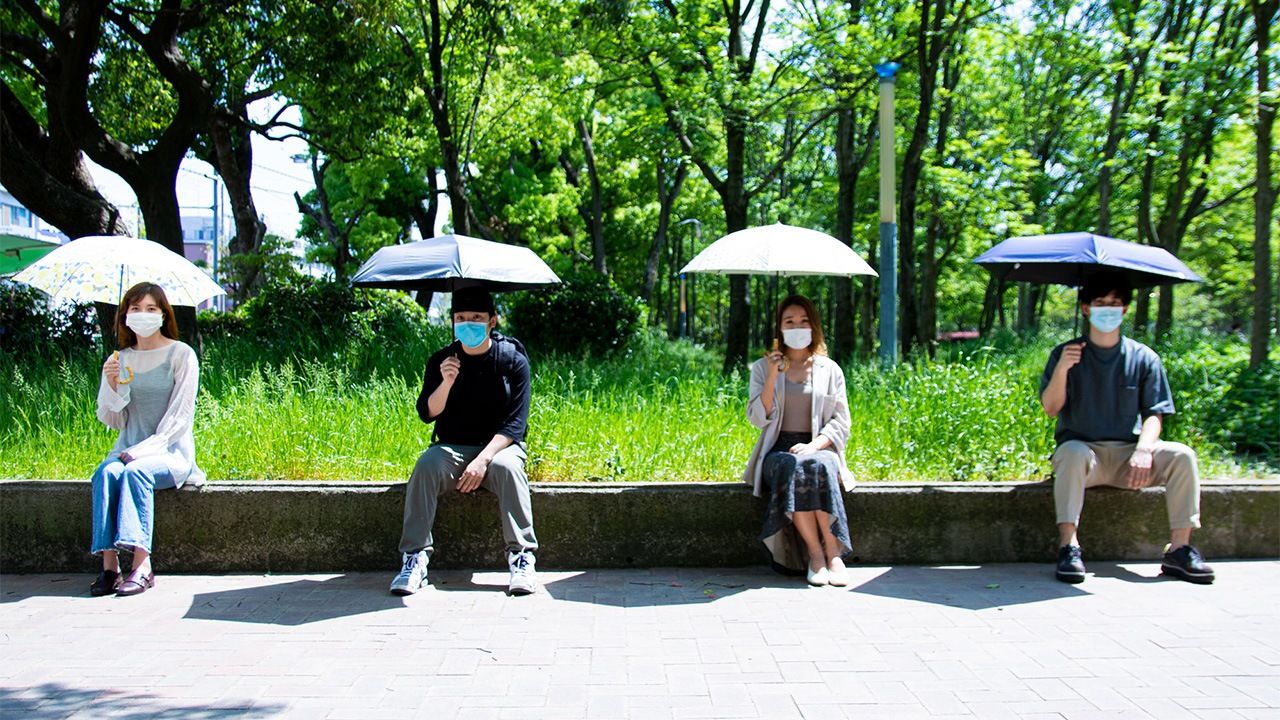 Parasols Do Double Duty this Summer

Lifestyle Society Health Aug 28, 2020
Mask-wearing is common in Japan to prevent the spread of COVID-19, but can lead to heatstroke in the country’s sweltering summer. As an alternative to masks, the Environment Ministry is urging the public to use parasols, which provide welcome shade while also helping their carriers maintain distance from others.

Sales Up 30% Over Last Year

Wearing a mask indoors or on a train is bearable if there is air-conditioning, but it’s very uncomfortable under a blazing hot sun. With Japan’s summer temperatures forecast to be above average nationwide, parasol sales have been up since before the end of the cooler rainy season. At department stores and other establishments, in-store advertising urges customers to use parasols for their shade, of course, but also to maintain social distance between themselves and others. 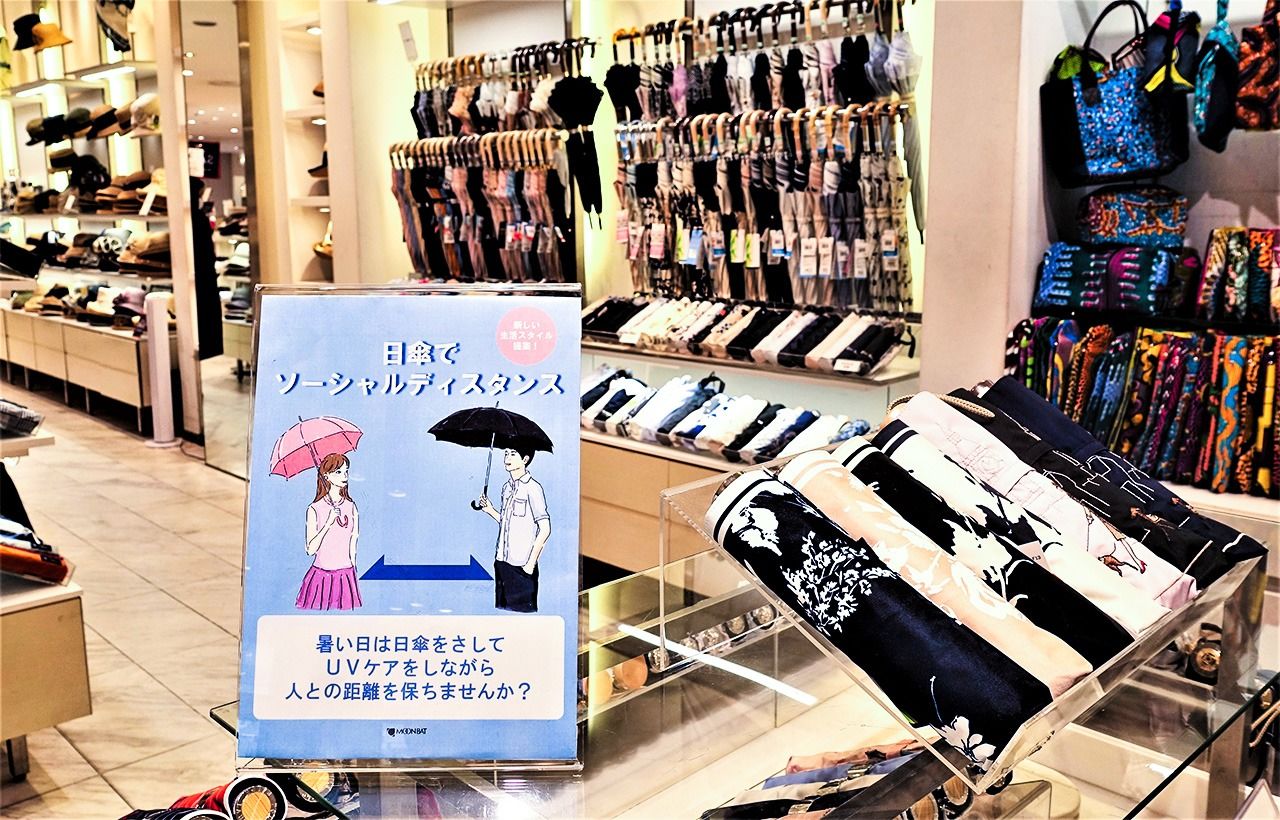 Advertising at Matsuya Ginza urges customers to stay apart with parasols. (Photo courtesy of the author)

According to Kadoya Keiichirō, sales manager at Osaka-based World Party Co., which handles WPC, Japan’s biggest parasol brand, “Ten years ago, we sold three parasols for every seven umbrellas, but nowadays figures are even, given increased demand for parasols due to global warming and concerns about ultraviolet rays. Most parasol buyers up to now have been adult women, but lately even high school girls are buying them. There’s even been talk on social media over the past few months that parasols are good for social distancing, and sales are up 30 percent over last year.”

Kadoya goes on: “Parasols are about 50 centimeters across, and users will naturally stand about a meter apart from others to avoid bumping into them. If two people use parasols, there will be a 2-meter-gap between them, which is exactly the social distance recommended by the health authorities.”

According to Kadoya, the most popular parasols protect against UV rays and block light and heat. They also double as umbrellas, since the coating applied to the fabric to accomplish all this fills the gaps between the fibers and makes the fabric waterproof. The best-selling products are folding parasols retailing for around ¥2,000 or ¥3,000.

Meanwhile, at Matsuya Ginza department store, which has run a special promotion for umbrellas and parasols in June every year for the past 50 years and is known as “the” place to buy a parasol, best-sellers are brand-name products in the ¥8,000 to ¥15,000 range. Matsuya Ginza even has “umbrella masters” certified by the Japan Umbrella Promotion Association on hand to inform customers of their wares’ special features and give advice on how to care for them. 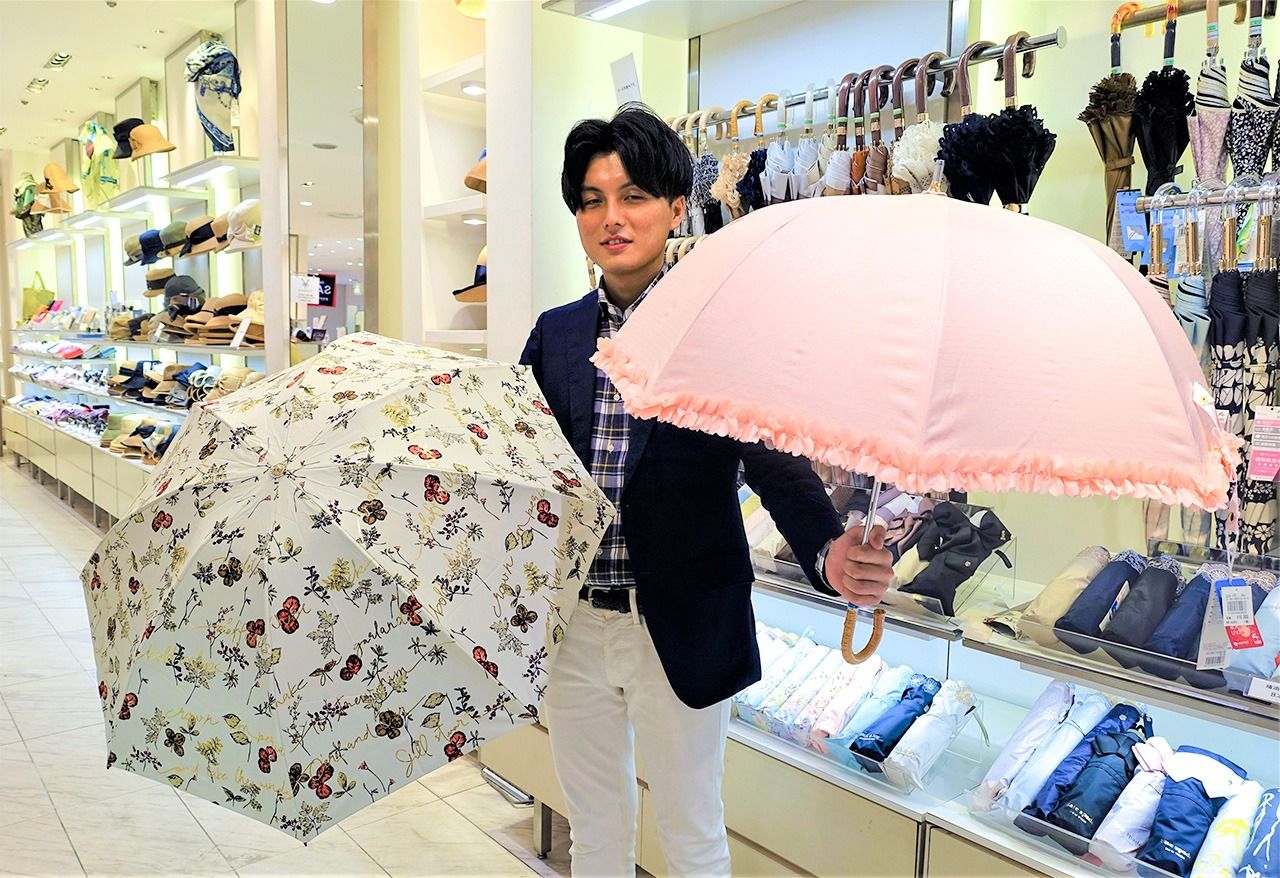 Frilly pink and botanical print parasols are on offer at Matsuya Ginza. (Courtesy of the author)

Heatstroke occurs when a person’s fluid and electrolyte balance goes out of whack, causing the body’s temperature-regulating mechanism to stop working properly. Mask-wearing during the pandemic can raise body temperature more than normal. In addition, since the inside of the mask is moist from exhaled breath, wearers may not feel thirsty, and it may take them a while to realize they are dehydrated.

Can parasols really help prevent heatstroke? World Party’s Kadoya notes that “JUPA does not have specific standards saying that parasols will reduce temperatures by a specific amount. That’s because the temperature-reducing effect varies depending on ambient temperature and other external factors, and stating a specific figure could be misleading.”

“Consumers can assume that parasols with a tag claiming a heat-blocking effect will cut heat. Moreover, if they choose a parasol that also comes with the highest light-blocking rating, they can be reasonably sure that their parasol will keep them cooler.”

Fabric carrying JUPA’s highest light-blocking rating has been tested according to Japanese Industrial Standards and is certified to cut light by 99.9%. Although some parasols may claim to block light “completely” or “100%,” JUPA has no such standards. Such claims are misleading, since, given that parasols are sewn together with needle and thread, there is no such thing as a parasol guaranteed to block out light completely. 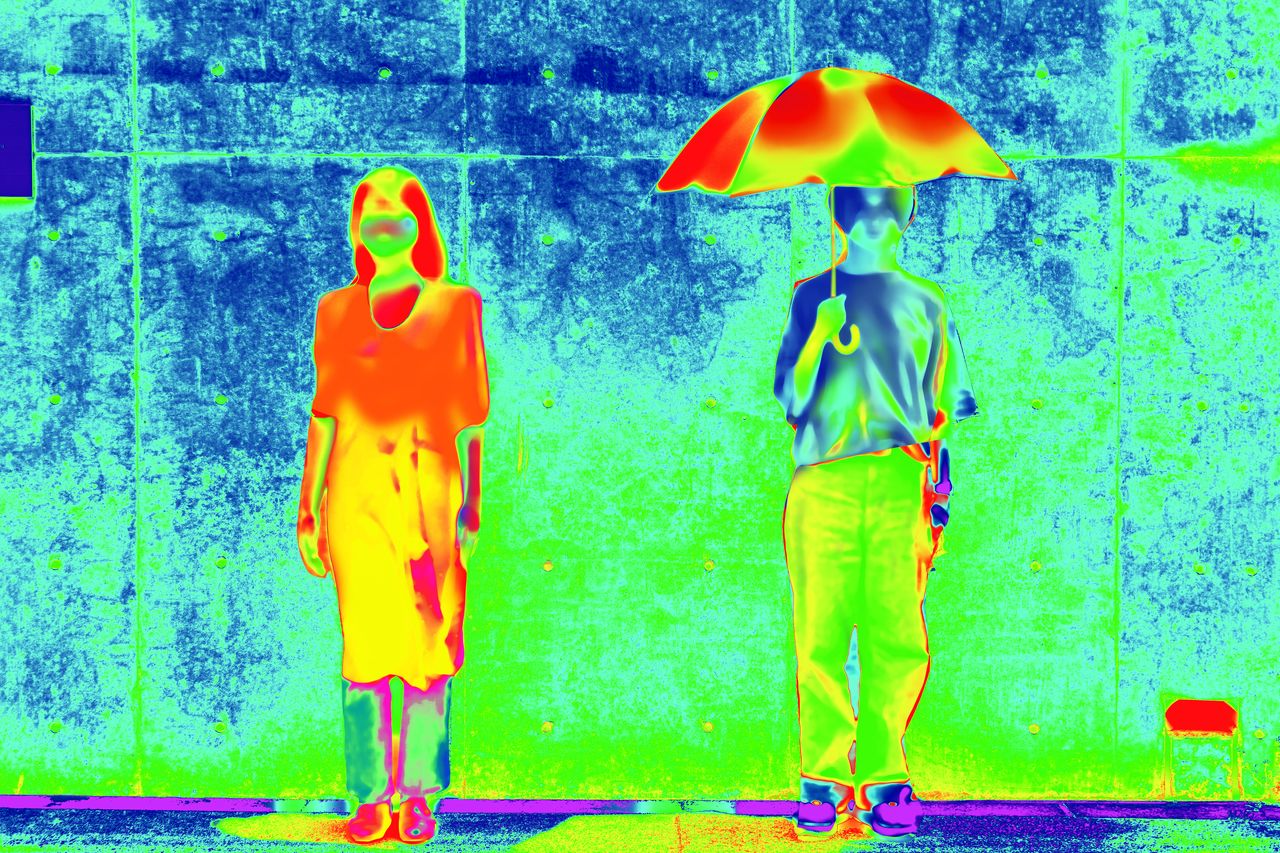 An infrared thermography image shows the temperature difference with and without a parasol. (Courtesy of World Party)

For Kids and Men Too

Heatstroke cases tend to rise from early summer to midsummer, before the body is acclimated to heat, and the Environment Ministry encourages the public to use parasols. Ministry figures indicate that using a parasol blocking light by 99% can lower perspiration by 17% and reduce the heatstroke risk level.

Students at Dōjiyama Elementary School in Toyota, Aichi Prefecture, have been using parasols on sunny days since the end of May. The school, concerned that wearing masks and hats could lead to heatstroke, took the unusual step of having the children use parasols on their way to and from school.

This attracted attention on social media, and other elementary schools have since followed suit. The five elementary schools in the town of Inami, Hyōgo Prefecture, are lending out 1,700 parasols to their students until the end of August. With summer vacation shorter to make up for school closures earlier this year due to the pandemic, it’s likely that schoolchildren all over Japan will be using parasols to shield from the summer sun as they go to and from school. 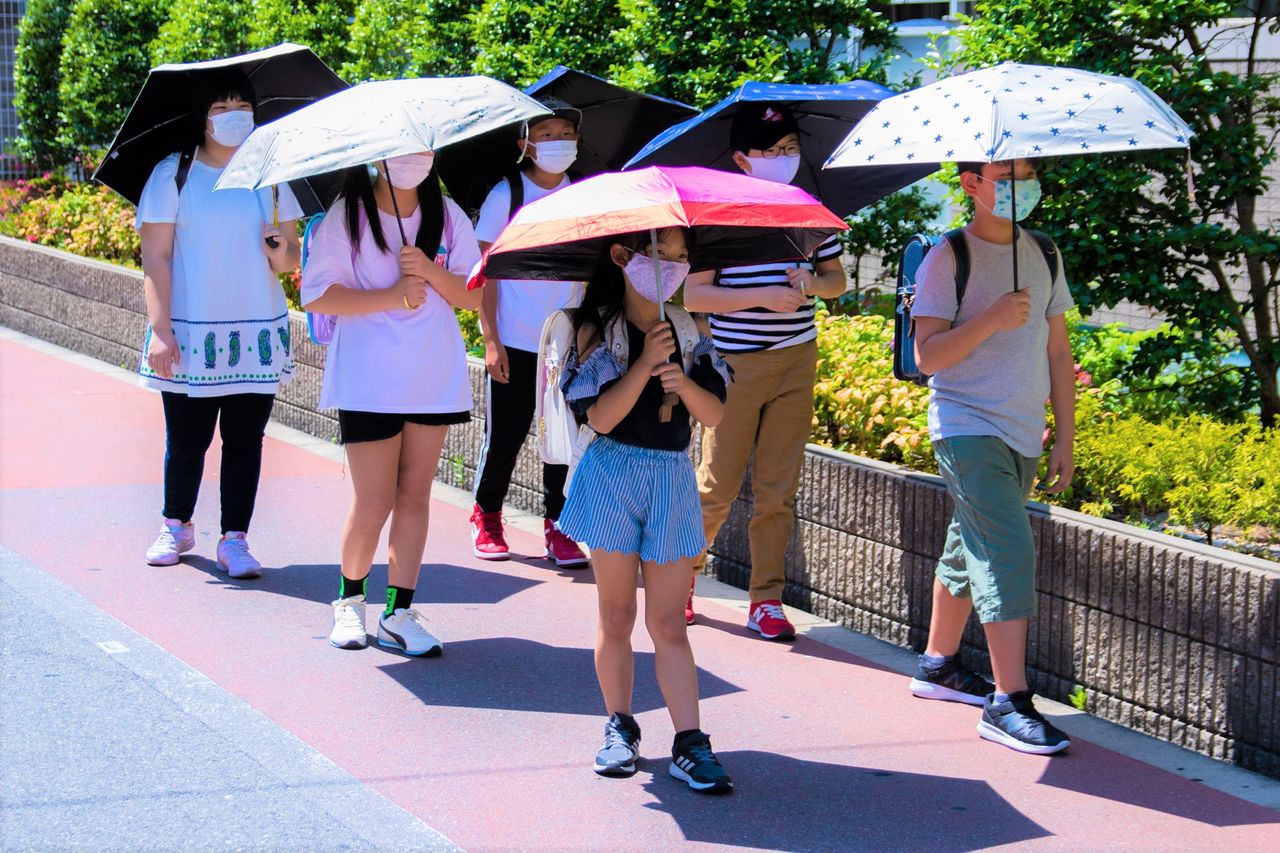 Schoolchildren using light- and heat-blocking parasols. The dark shadows cast by the parasols are visible on the sidewalk. (Courtesy of World Party)

World Party has responded by developing child-size parasols, which went on sale in late July. The parasols can be used as umbrellas too, and come in navy and pink. They are also equipped with reflectors for nighttime safety.

Younger men are starting to see the benefits of parasols as well. Matsuya Ginza’s Iseda says, “We’ve started seeing higasa-danshi—male parasol users—for a few years now, and sales reps making their rounds in the Ginza area these days often use parasols.” Matsuya Ginza sells men’s parasols in its menswear department on an upper floor, but it has also started offering a bigger selection of plain, unisex parasols alongside items for women on the first floor to attract male customers.

Parasol use is common in East Asian countries like Japan and China. Kadoya says that parasols have started to become popular lately among the wealthy in Thailand and other Southeast Asian countries, and he expects that demand may increase as income levels in the region rise further.

Parasols have a long history, having initially been used in ancient Greece for sun protection. Umbrellas as we know them today first came into use in England in the 1820s. Nowadays parasols are seldom used in Western countries, but as a means of beating the heat while maintaining social distance, high-tech, made-in-Japan parasols could come to attract growing interest.