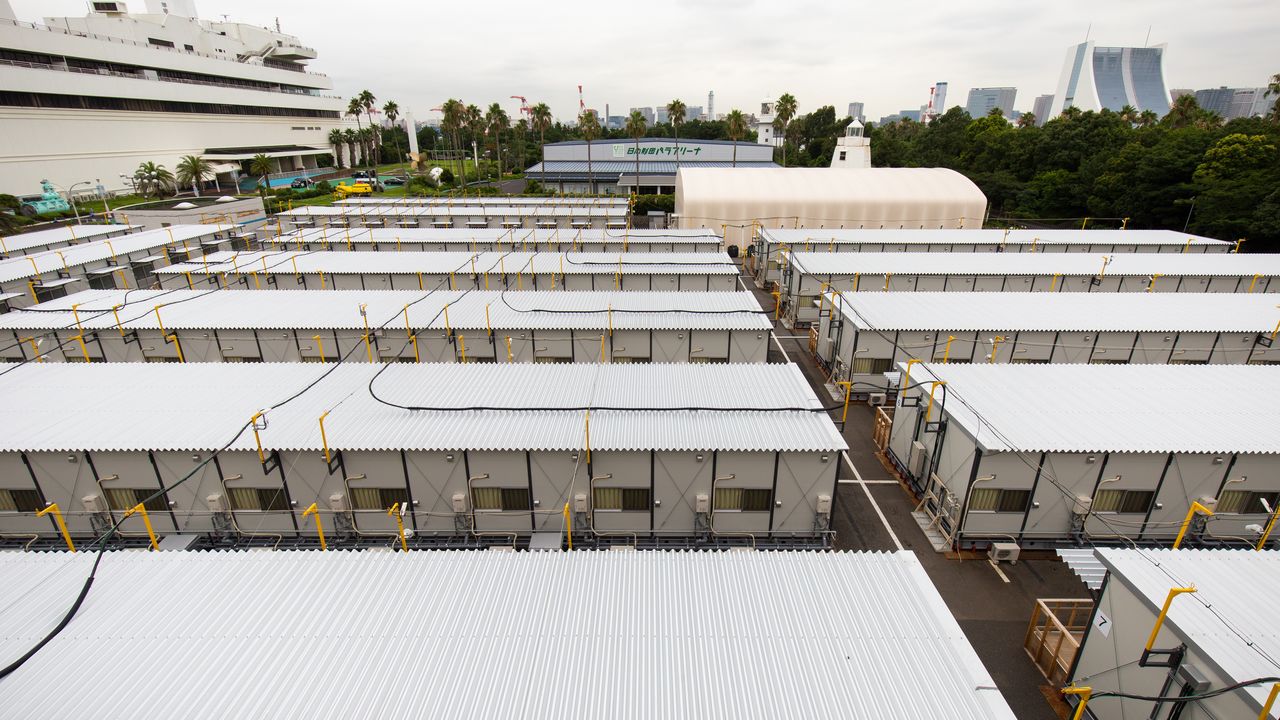 A Look at the New Isolation Facility in Odaiba

Health Disaster Tokyo 2020 Aug 21, 2020
Amid a resurgence in coronavirus cases, the Nippon Foundation Disaster Emergency Support Center, an isolation facility for those with mild or no symptoms, has been erected in Tokyo’s Odaiba district. The facility comprises 250 beds spread between the Nippon Foundation Paralympic Support Center and prefabricated units in the parking lot of the Museum of Maritime Science.

On July 30, just as Tokyo’s government announced a record 367 coronavirus cases in a single day, the Nippon Foundation Disaster Emergency Support Center, located in Higashi-Yashio, Shinagawa, was being unveiled to the media. The facility was constructed by the Nippon Foundation with the aim of averting a shortage in hospital beds, thereby helping to prevent the collapse of the health system. Serving as an isolation facility for asymptomatic cases as well as patients with mild symptoms, the Center comprises 100 beds in the Nippon Foundation Paralympic Support Center and an additional 150 beds housed in 140 modular units in the parking lot of the adjacent Museum of Maritime Science. The Center has been designed to be scalable to up to a maximum of 600 beds, if necessary. The 600 m2 marquee in which doctors and nurses are stationed can also be used for storing supplies.

The Tokyo Metropolitan Government will take possession of the Center later this month. Since mid-July, coronavirus cases in Tokyo have exceeded the levels we saw from early April, when the state of emergency was declared, through the beginning of May. The Center thus serves as a bulwark against a second wave of infection. 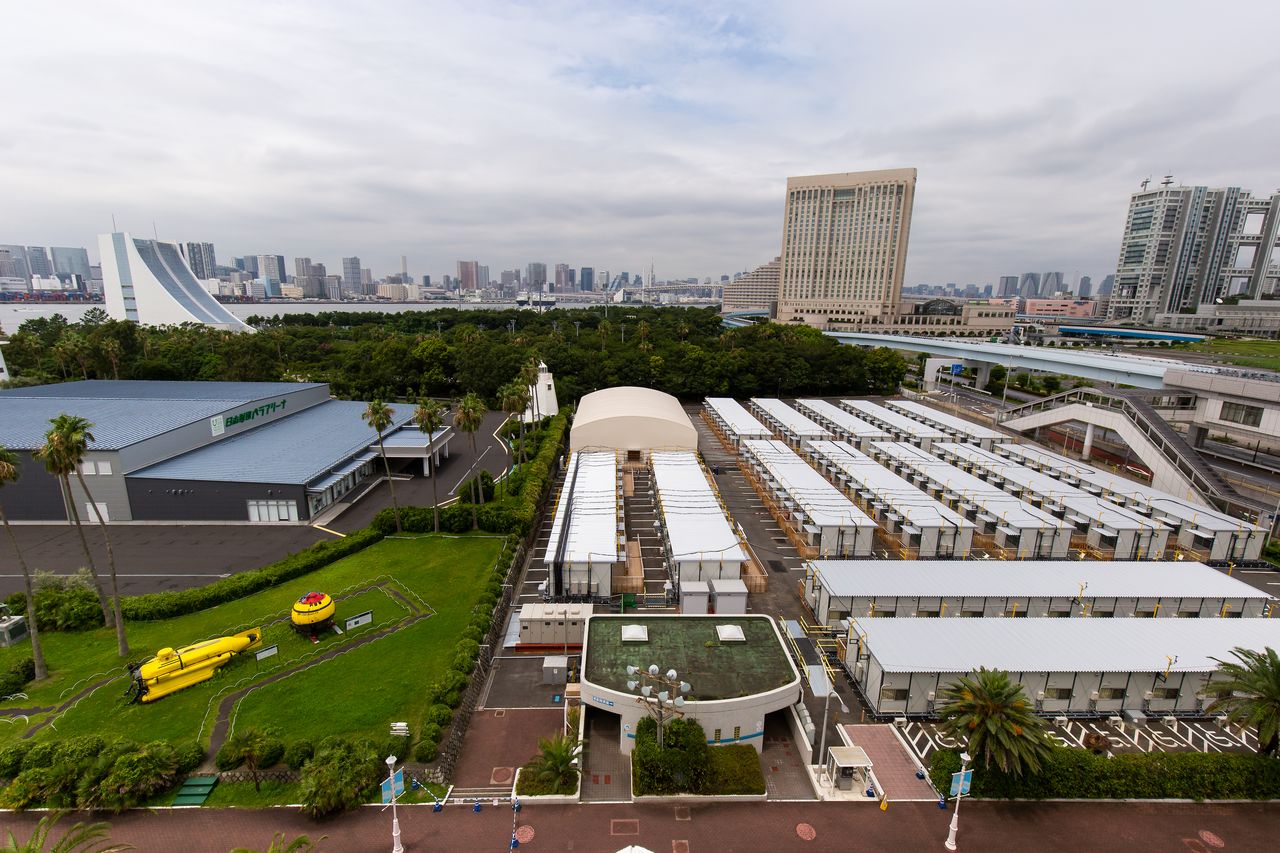 The Nippon Foundation Disaster Emergency Support Center, near Tokyo International Cruise Terminal Station, seen from the roof of the Museum of Maritime Science. 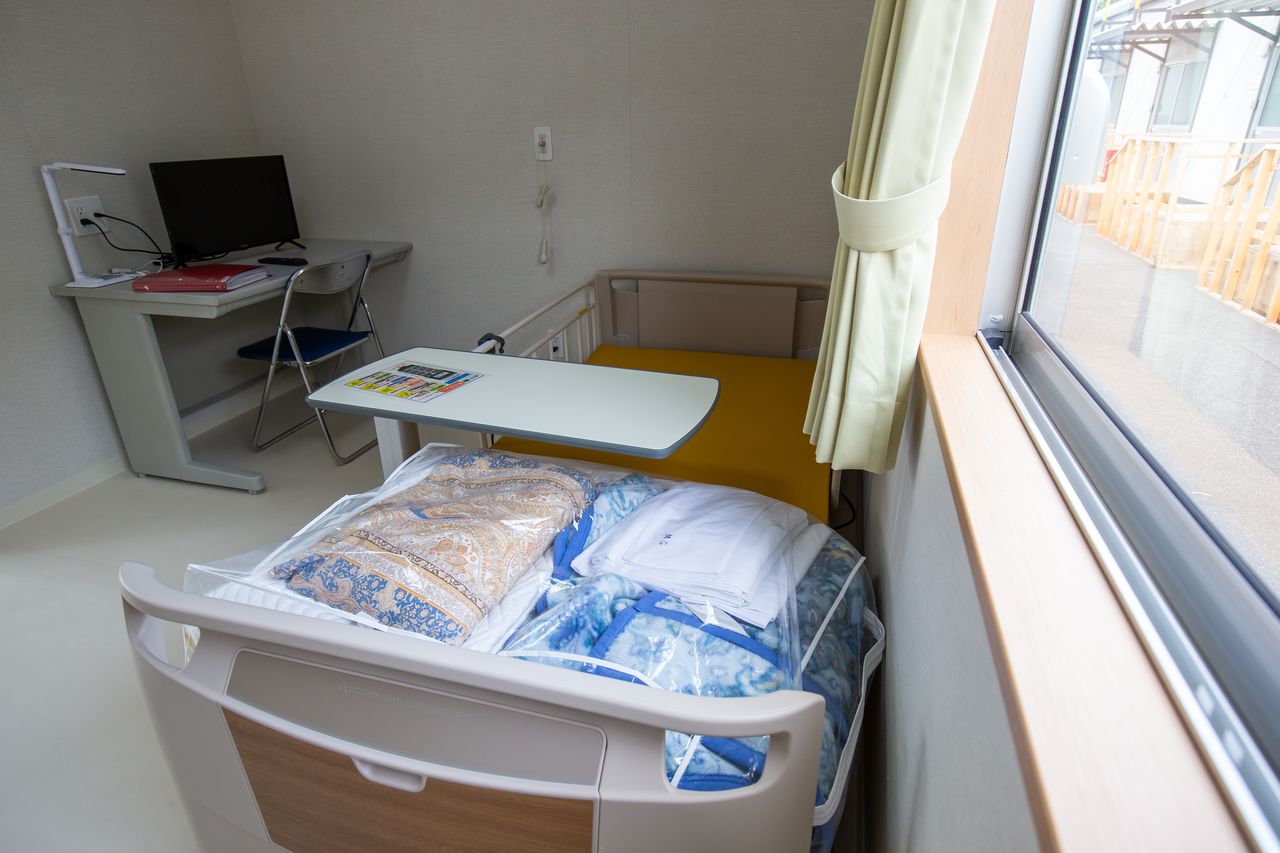 The Nippon Foundation announced its plans to build the Center on April 3, as the rising number of coronavirus cases was becoming a cause for concern. Earlier that day, Health Minister Katō Katsunobu had announced that asymptomatic cases and those with mild symptoms would be required to isolate, either at home or in hotels. At the time, a 1,200-bed facility was envisaged, and Nippon Foundation Chair Sasakawa Yōhei said he would “work out the details on the run,” finishing the press conference by saying, “while we hope this facility will not be needed, we decided to build it in recognition of the importance of being prepared.”

Infections dropped after the Golden Week holiday, during which the Japanese public had been instructed to stay home. The Nippon Foundation continued to liaise with the Metropolitan Government and the Ministry of Health, Labor, and Welfare, and by mid-May, had already put together a makeshift facility in the form of 100 beds laid out in the Paralympic Support Center. 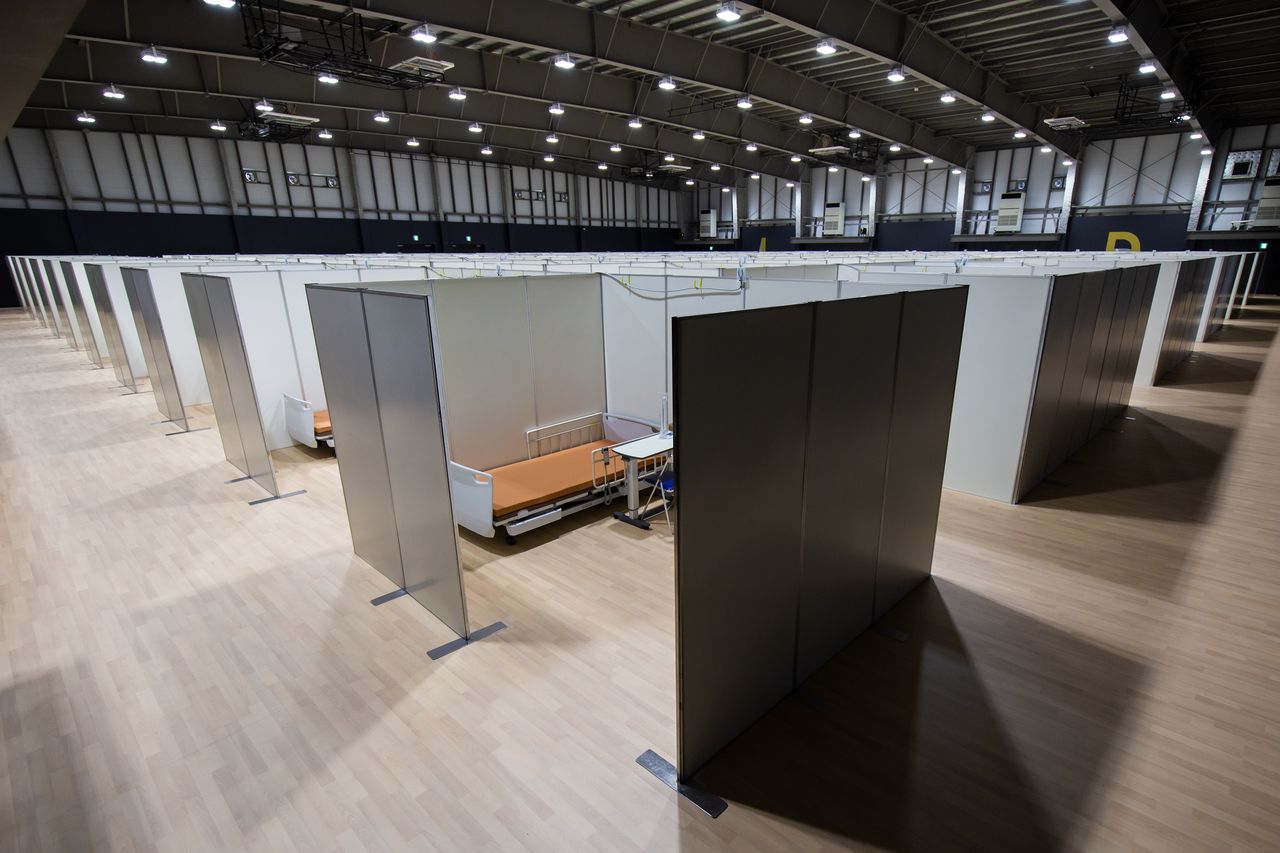 Beds laid out in the Paralympic Support Center ensure sufficient space between patients.

Each of the modular units is 20 m² in size, putting them on a par with a studio apartment. All units have a nurse call button so occupants can contact the on-call staff in an emergency.

Nippon Foundation Executive Director Sasakawa Junpei says, “All the units are at ground level. With no stairs, it’s easy for health professionals to move around the Center. We have ensured that the facility is as user-friendly as possible, not only for patients, but also for doctors and nurses, and would like to see it put to good use as soon as possible.” 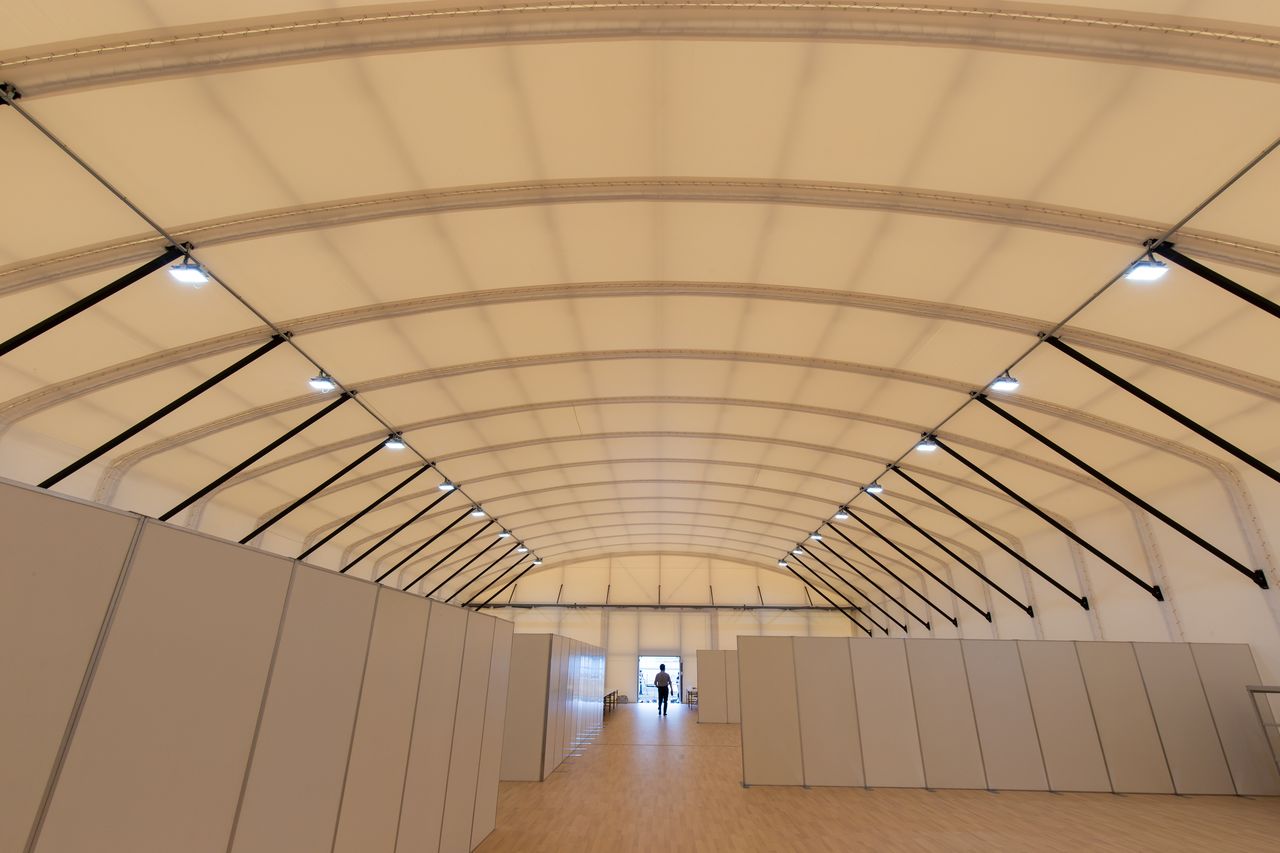 The air-conditioned marquee is sturdy enough to withstand a major typhoon. 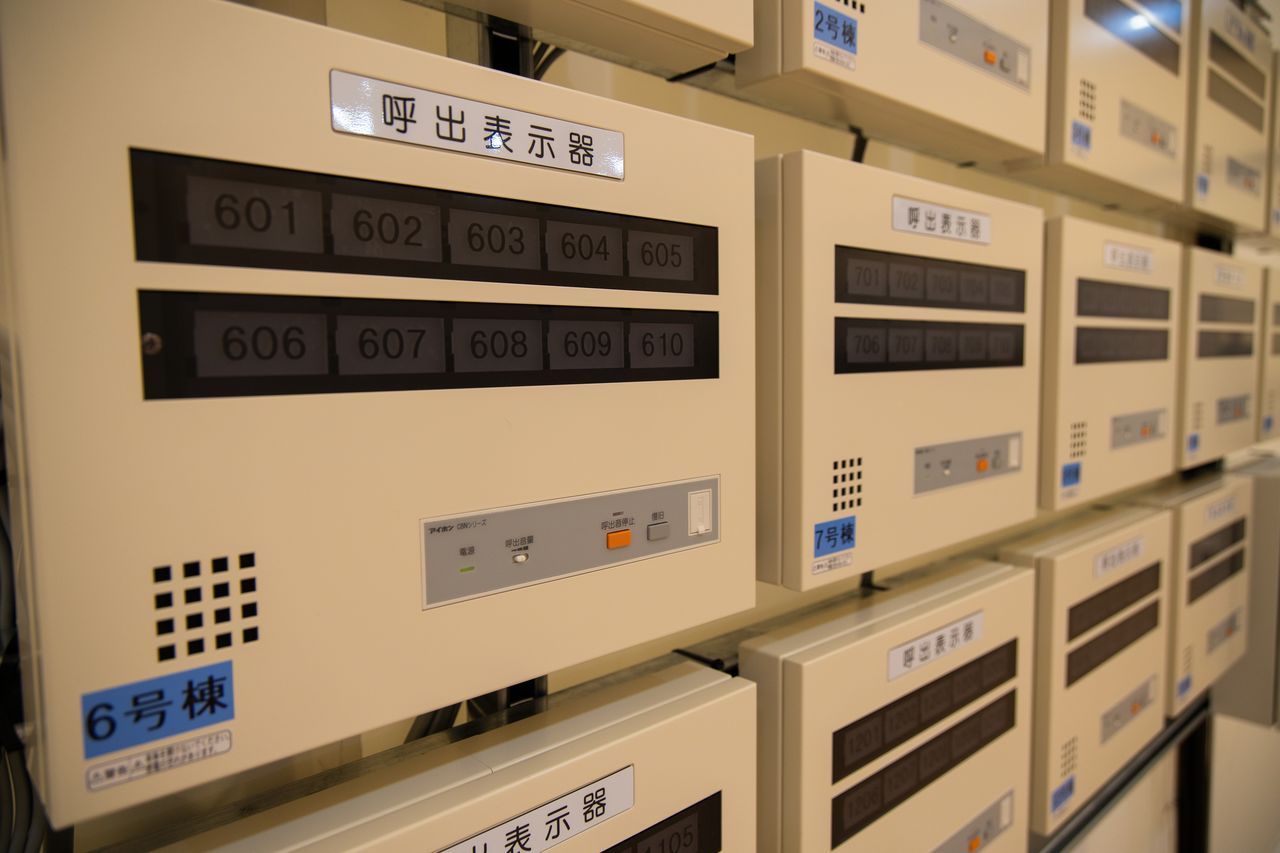 This display panel lights up when a nurse call button is pressed. 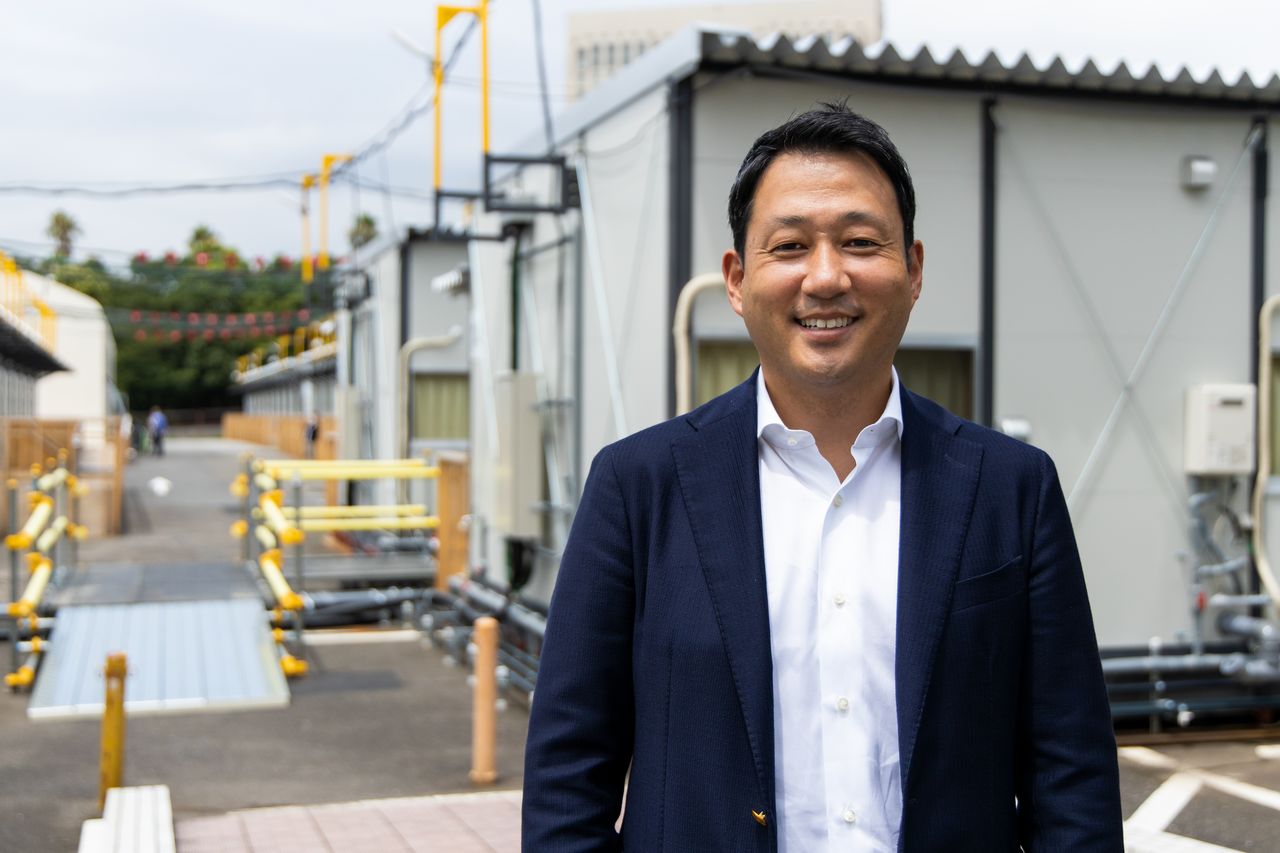 Sasakawa Junpei says the Foundation considered the needs of patients, medical professionals, and disabled athletes at every step.

Each unit has a television, fridge, microwave oven, and even a washing machine. Higuchi Yasushi, leader of the Nippon Foundation’s disaster response team, says this enables patients to wash their own clothes and towels in their rooms, thus preventing the spread of infection.

Each of the 14 prefabricated buildings contains 10 modular units. Ten of the units contain two beds each, making them ideal for family groups who have contracted the virus. One of the buildings is designed to be accessible to disabled people, and features handrails in the showers and toilets. 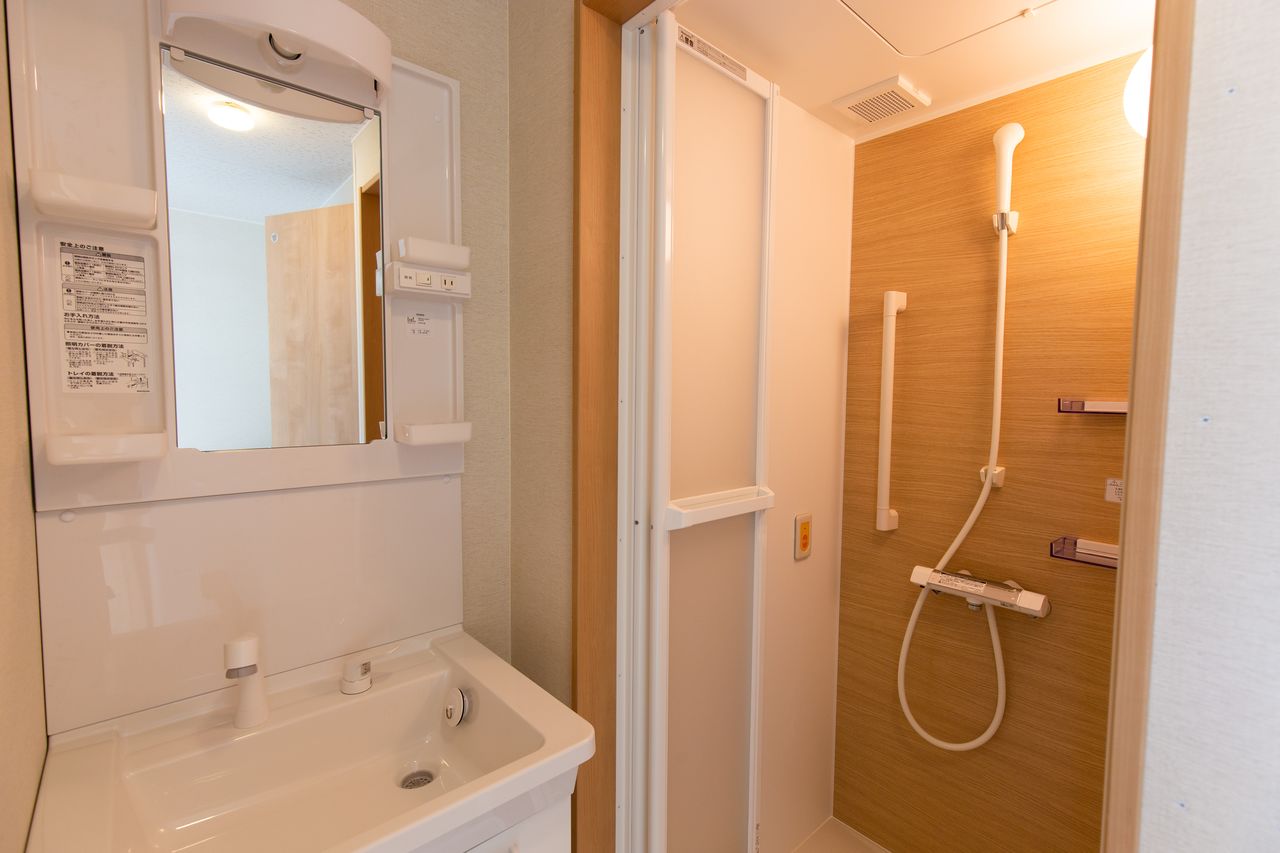 The shower and wash basin.

The biggest difference between these units and a hotel is that occupants are able to step straight outside. While occupants are obviously not allowed to go out without permission, Higuchi says that by dividing the area into zones, it will be possible to allow asymptomatic patients to take walks on the grass, which will help reduce the stress of spending two weeks under medical observation. While one hears of coronavirus patients refusing to go into isolation because they cannot find anyone to look after their pets, the Center will likely make it possible for patients to bring pets—a final decision on this will be made by the Metropolitan Government, which will operate the facility. 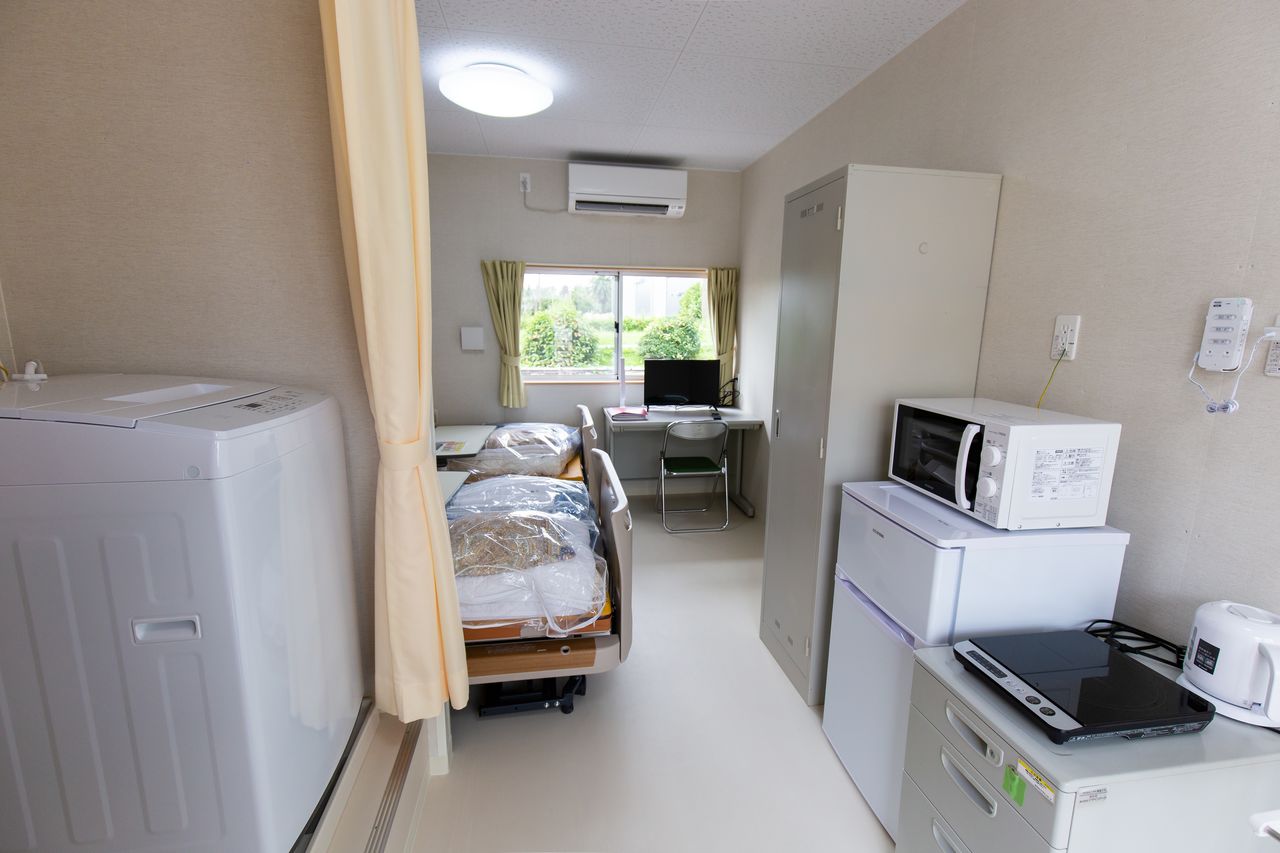 This room has two beds for a family group. 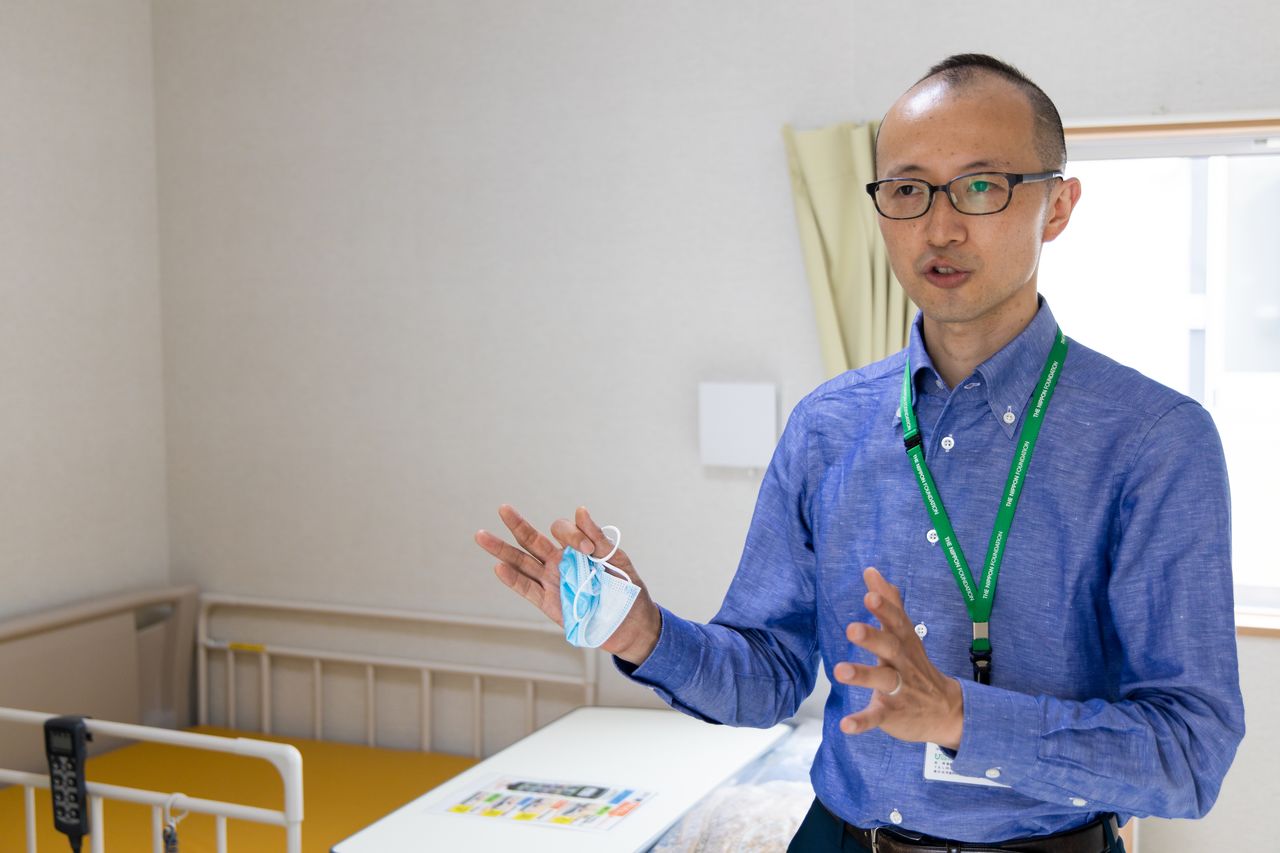 Higuchi says the Nippon Foundation consulted with experts to ensure a facility that can be used in a range of different scenarios.

Should the current outbreak worsen, the beds in the Paralympic Support Center, which are separated by partitions, will serve as a further line of defense.

Until the establishment of the Support Center, Japan had no proper training facilities for disabled sportspeople, and it was difficult for disabled groups to hire other facilities, as in wheelchair sports like rugby and basketball, collisions between wheelchairs are frequent, and when chairs tip over, they tend to damage the floor. While the Paralympic Support Center had boasted almost 100% utilization since its opening in June 2018, the relevant sports bodies consented to the temporary closure of the Center amid the coronavirus pandemic. 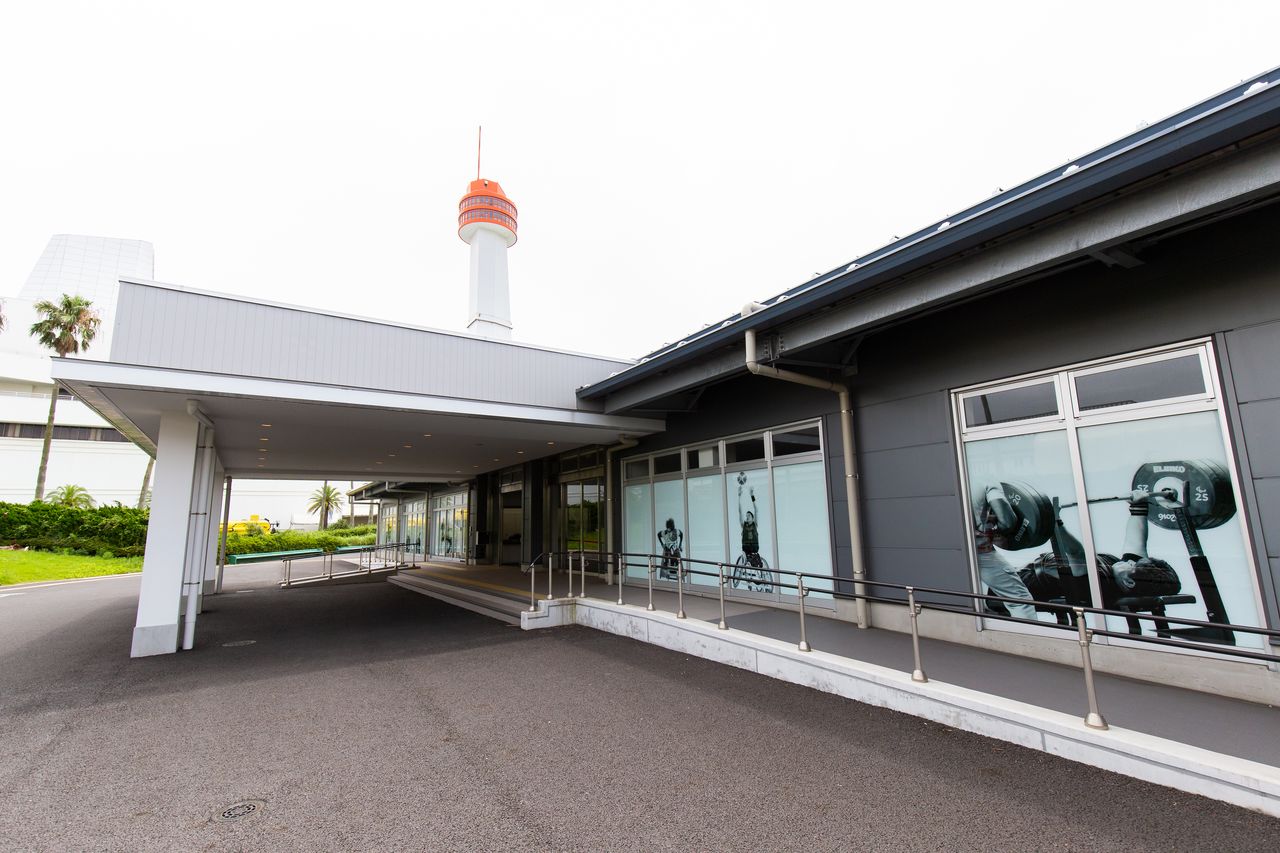 To look at it from the outside, you would never imagine that the Paralympic Support Center is now fitted out with hospital beds.

Sasakawa Junpei says, “We stand with disabled sportspeople and will always there for them, but right now, we have to do our bit to fight the pandemic. We will do our best to eliminate the virus, so that the athletes can get back to their sports as soon as possible.”

The Nippon Foundation has also deployed 100 modified taxis fitted with countermeasures to prevent the transmission of the virus. The Foundation says after rolling out the taxis in Tokyo, it will consider extending the service to other regions.

On July 29, Tokyo Governor Koike Yuriko explicitly referred to the current coronavirus outbreak as the “second wave.” The Metropolitan Government is keeping 2,000 hotel rooms available for those with moderate symptoms, and the Nippon Foundation is supporting these efforts with solutions to alleviate the shortage of options for transporting coronavirus patients, in addition to isolation facilities. 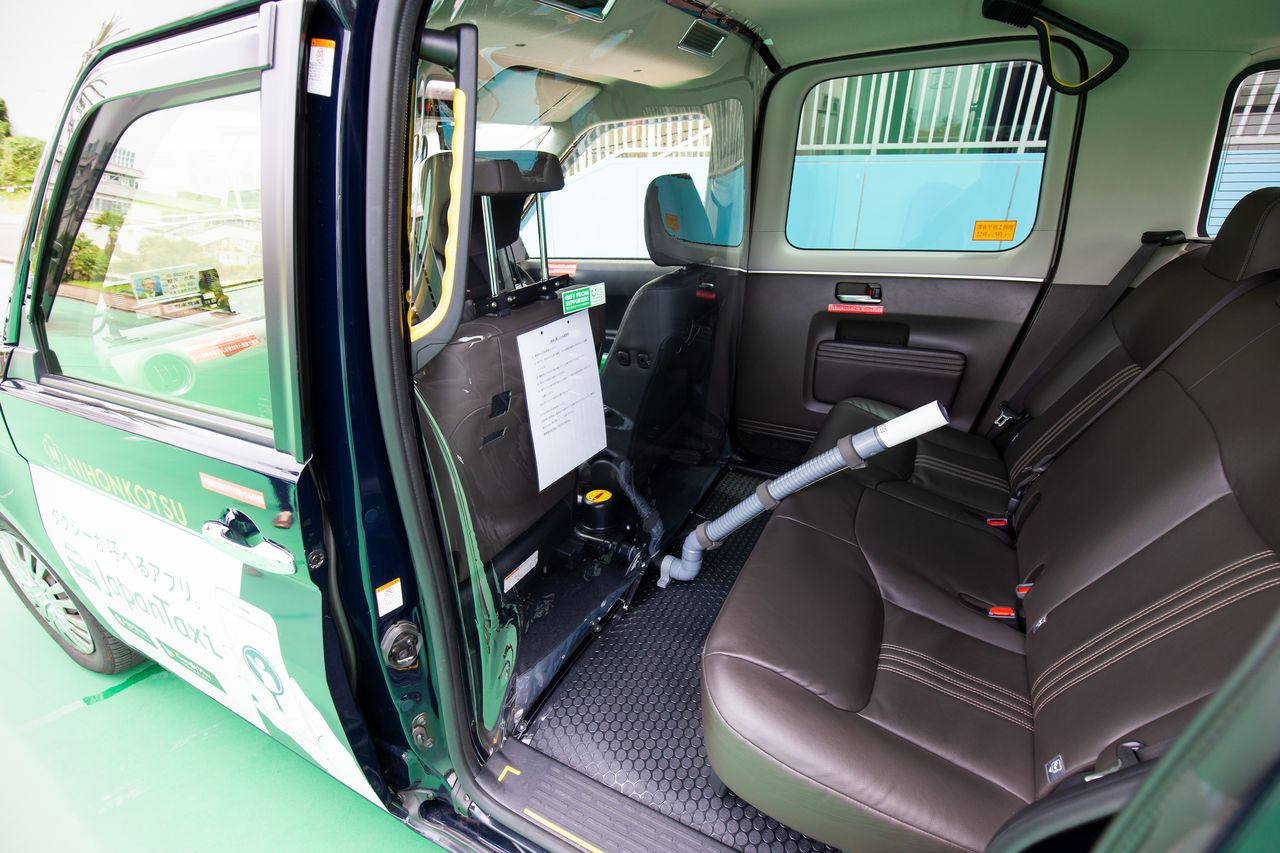 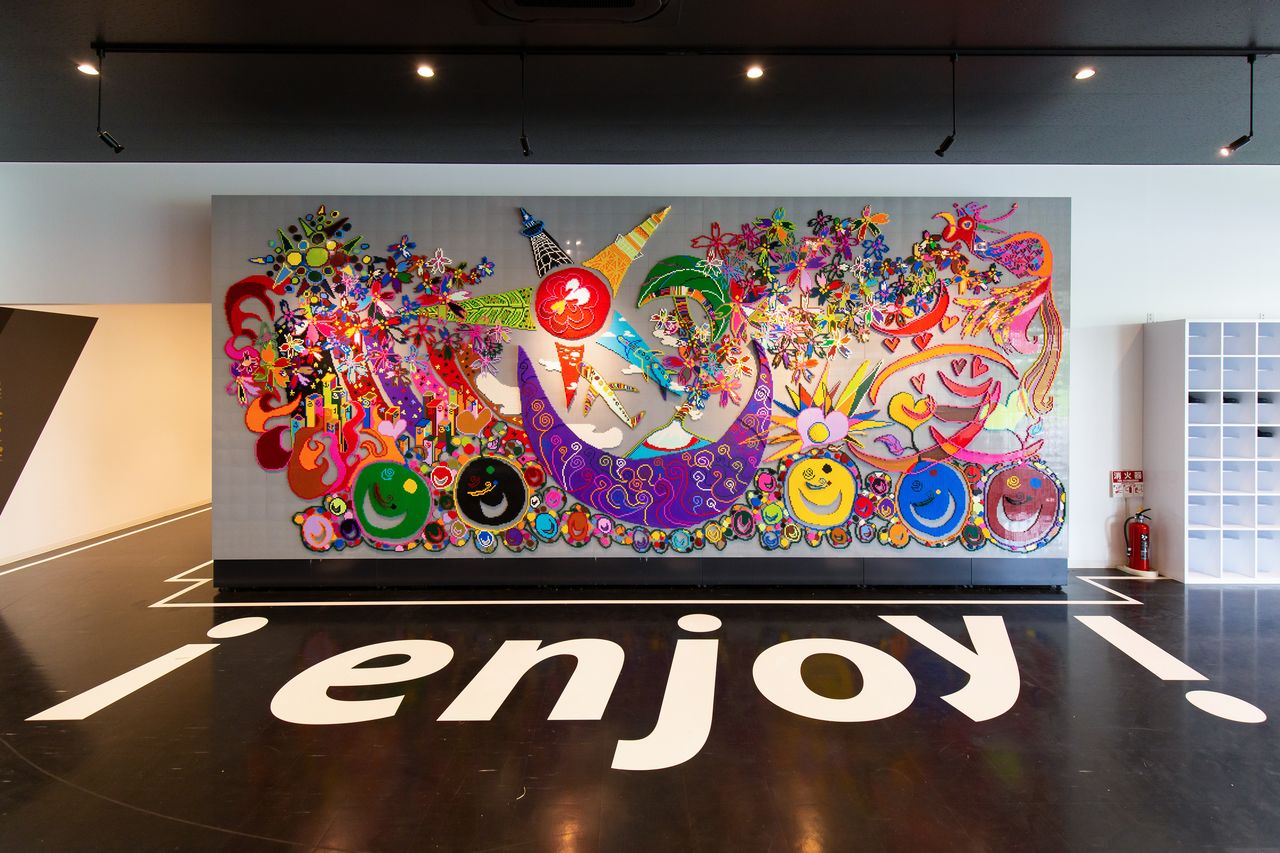 A painting at the Paralympic Support Center by the entertainer Katori Shingo has been reproduced as a Lego mural.