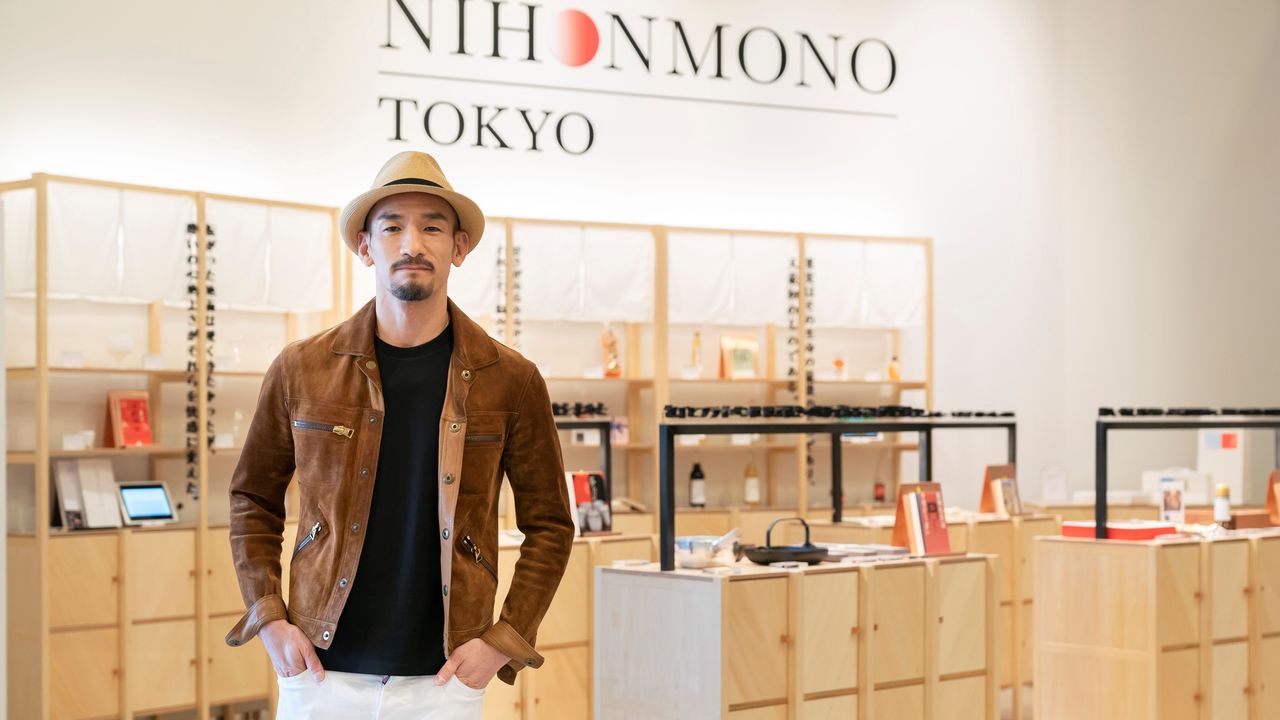 Economy Society Food and Drink Sports Oct 27, 2020
Nakata Hidetoshi became a soccer legend with the 1996 Atlanta Olympics, where he helped Japan defeat Brazil in the Miracle in Miami. He represented Japan at three World Cups and went on to play in the Italian Serie A and English Premier leagues. After retiring in 2006, his travels inspired him to preserve endangered Japanese traditions. 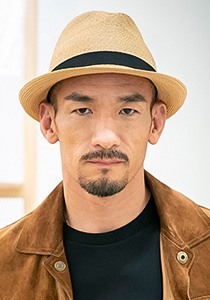 Former player for Japan’s national soccer team. After retiring, left on a trip to 100 nations and regions. From 2009 went on a tour of all 47 of Japan’s prefectures, visiting over 400 sake breweries along the way. Moved by the flavors and deep cultural roots of the drink, he founded Japan Craft Sake Company in 2015. Currently involved in sake consulting, development of the Sake Cellar refrigerator, the Sakenomy app, and the sake drinkware brand Nathand, and sponsorship of Craft Sake Week, one of the world’s largest sake events. Nakata showcases Japanese culture and artisanship across a variety of media, including posting his travels online at the website Nihonmono , introducing artisans in a book of the same title, and hosting a weekly radio show, Voices from Nihonmono.

A Trip to Experience Tradition

The Japanese media have a penchant for playing up positive Japanese qualities to excess. But the country can be justifiably proud of its tradition of exceptional craft, and Nakata Hidetoshi has found himself swept away by that tradition.

Nakata, a top Japanese soccer player who represented the country in Olympic and World Cup play and played for clubs in the Italian Serie A and English Premier leagues, left the sports world after the 2006 Germany World Cup, and became something of a professional wanderer.

He set out on his trips with only a vague goal, and then let the road lead him where it would. He planned to see all of Japan, both figuratively and literally, in that he wanted not only to visit every prefecture, but to explore every nook and cranny of his home country. He kept building on his travel experience, and through that grew ever closer to the traditional artisans spread throughout Japan.

Eventually, he came to a deep realization.

“No matter how impressive, how wonderful I found the work these masters were producing, lots of them would go on to just disappear. Things don’t always vanish because they’re bad. Even the most amazing products and skills can be lost.”

Nakata spent years in Italy during his soccer career, and he naturally became a wine aficionado there. After returning to Japan, he helped to bring Lambrusco Bacio, a sparkling red produced in the Parma region, to the Japanese market. That work took him to visit the winery and to meet the vintners. The pride evident in every task undertaken by the traditional artisans there etched itself into his subconscious, almost without his realizing.

The pride and skill of true craft is the same, whether you’re making wine in Europe or sake in Japan. Even so, while Europe’s traditions have found markets worldwide, many of the makers in Japan are just barely holding on domestically. 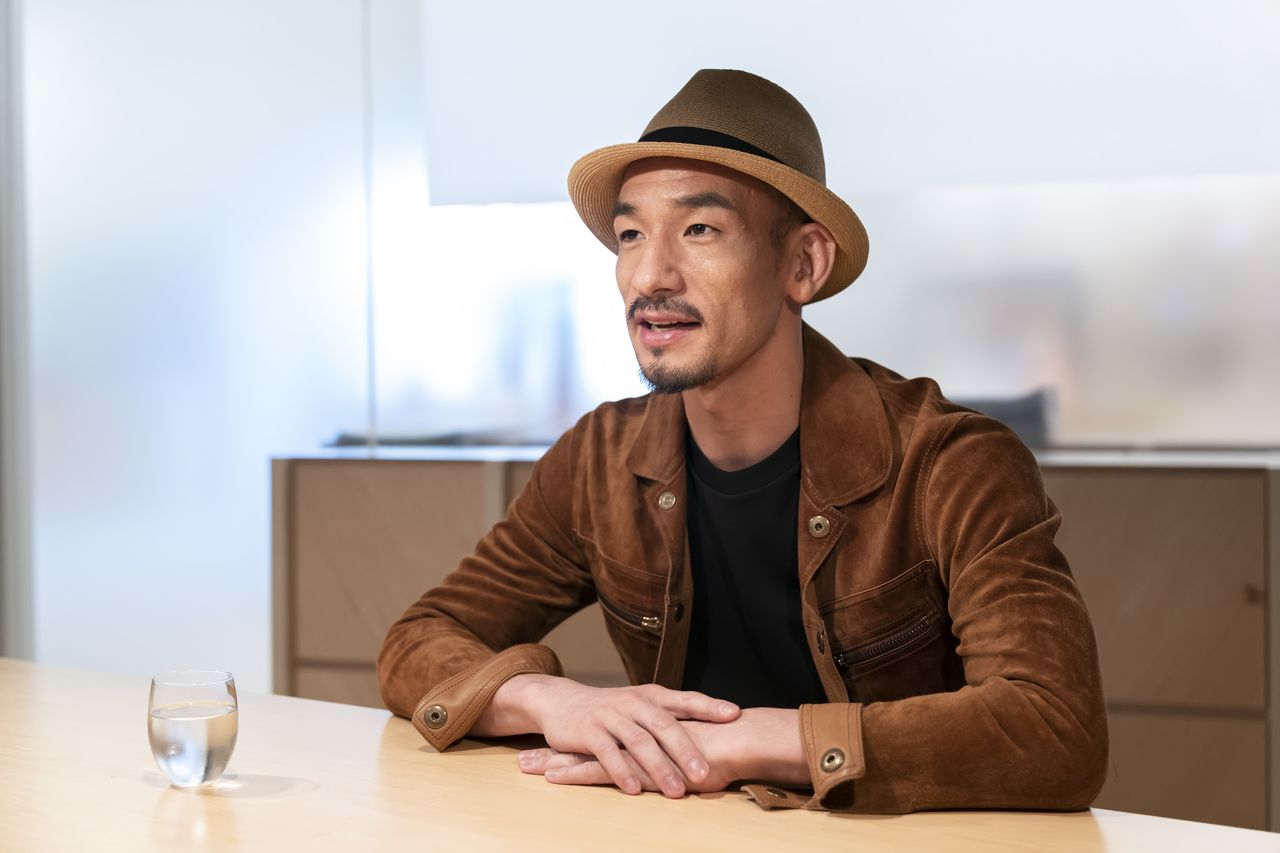 That’s where Nakata decided to focus his energies.

“I saw a chance, but only just a chance,” he explains. “To put it simply, most of Japan’s traditional craftpeople aren’t doing what they need to sell. These crafts have developed around a local market, so up to now they haven’t needed to do any extra work to find customers. Their customers were already there, and often knew them personally. There wasn’t much need for marketing or advertising. However, when the market becomes the whole country, or the whole world, the old sales systems simply won’t work. That’s where I want to bring about change.”

Nakata began thinking about what he could do to make a difference there. One idea was the website Nihonmono. The name is a play on words—it can translate to “Japanese things,” and also is a portmanteau of Nihon and honmono: true Japan. The goal of the website is to raise awareness, and basic understanding, of the quality of traditionally produced goods.

“I keep hearing that young people don’t like to buy traditional Japanese things, but I think the truth is a little different. Like, if I didn’t know anything about sake, when it came time to decide what to drink tonight, I’d probably just pick something cheap. Not good, cheap. Now, though, I’m the kind of person who chooses quality, regardless of price, and that’s because I’ve learned about sake. I now know how to choose a good drink.”

Nakata is currently working to equip makers with the tools to better communicate with consumers, so that they can make better choices about the products they choose.

Of course, Nakata is not the only one who has seen the potential in Japan’s traditional craft industries. However, even if someone comes up with a fantastic idea to revitalize these industries, it will go nowhere without the ability to deal with the key artisans involved and get them on board. When the person bringing such an idea is an industry outsider—and a celebrity to boot—it can come across as an unwelcome intrusion, or even simple condescension.

But Nakata’s vision and ideals have won over a great number of artisans.

“The things I’ve done these last few years have led people to trust in my intentions. For sake, the most effective thing has been me taking the time to tour the country and visit as many brewers as I could. I’ve gathered over a hundred brewers from all over Japan to join Craft Sake Week annually for several years now. It’s been vital to make time to spend with the makers, to get close to them, and to earn their trust.”

When he was still playing, Nakata Hidetoshi often gave an impression of haughty irreverence, but when he remade himself as a traveler he approached the world with humble curiosity, demonstrating an ability to gain people’s trust. Not even the most passionate sake shop owner has visited as many breweries, or tasted as many varieties of sake, as Nakata has—at least, to an outside observer, that’s how deeply he seems to have grown into the sake world.

While he has continued along his path of spreading awareness, another seems to have opened along with it.

“With sake, there’s one thing I still wonder about, or rather, can’t really understand. That’s the question of why there isn’t a truly ideal sake drinking vessel yet. We have to assume that the traditional small pottery ochoko cups developed to let people enjoy sake’s flavor and aroma. But that historical sake and the sake of today are completely different. So, why do we keep using the same style of cup? Each style of wine or champagne has a different glass, and they each bring out different aromas and flavors. That’s what inspired me.”

Sake’s continued evolution, and the passion driving its brewers, has created sake with more elegant aromas and flavors than ever before, and overall sake has reached unprecedented heights of quality. This new age of the drink would seem to call for a new style of drinking vessel, as well. In response, Nakata has helped bring to the market a new brand of specialty sake glasses, Nathand, which combines modern style with designs that help to better express modern sake’s aromas and flavors. As experiments continue to show that sake is a suitable match for food from all over the world, not just for Japanese cuisine, these glasses are quickly being adopted by top-class restaurants of all kinds. 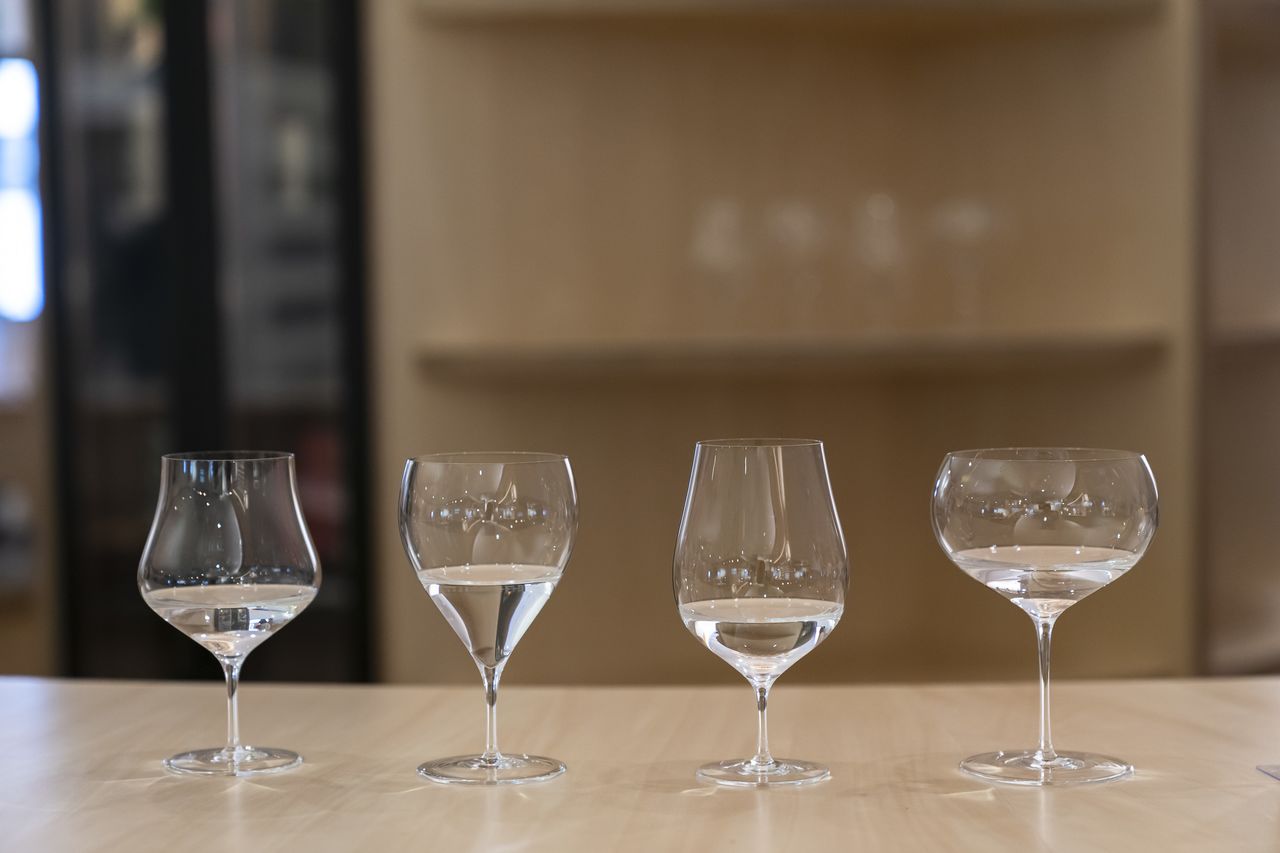 From Sake to Tea, Shōchū, and Handicrafts

This brings up another issue Nakata noticed when he began to work in the sake world.

“The first drink anyone expects with dinner is water. Of course, alcohol fans have other choices, as well. But, if people can’t or don’t want to drink alcohol, what do they look for when water isn’t enough? And from a restaurant’s perspective, what can they do to boost profits from customers who don’t drink? Water has lots of limits. And that’s why I think tea has so much potential. Just like with sake, tea has a variety of highly valuable styles. They can offer some additional pleasure for diners, and help restaurants increase profits.”

There surely are not many people born in Japan who have not drunk tea. Even if fewer people are brewing it the old-fashioned way at home, convenience store shelves are lined with a huge variety of bottled versions. At the same time, the general level of knowledge about tea does not seem to be very high.

“Imagine we have some really good Japanese tea here. The label says kamairi-cha asamushi—pan-roasted tea leaves, lightly steamed. How many people will read that and be able to imagine the tea’s flavor? How many people will see that and think of it as something they just have to try? In the end, I get the feeling that the labeling for traditional products like tea has reached the point that only people in the field can really understand it. What we really want to do is to find a way to communicate the quality to people who don’t know anything at all about tea.” 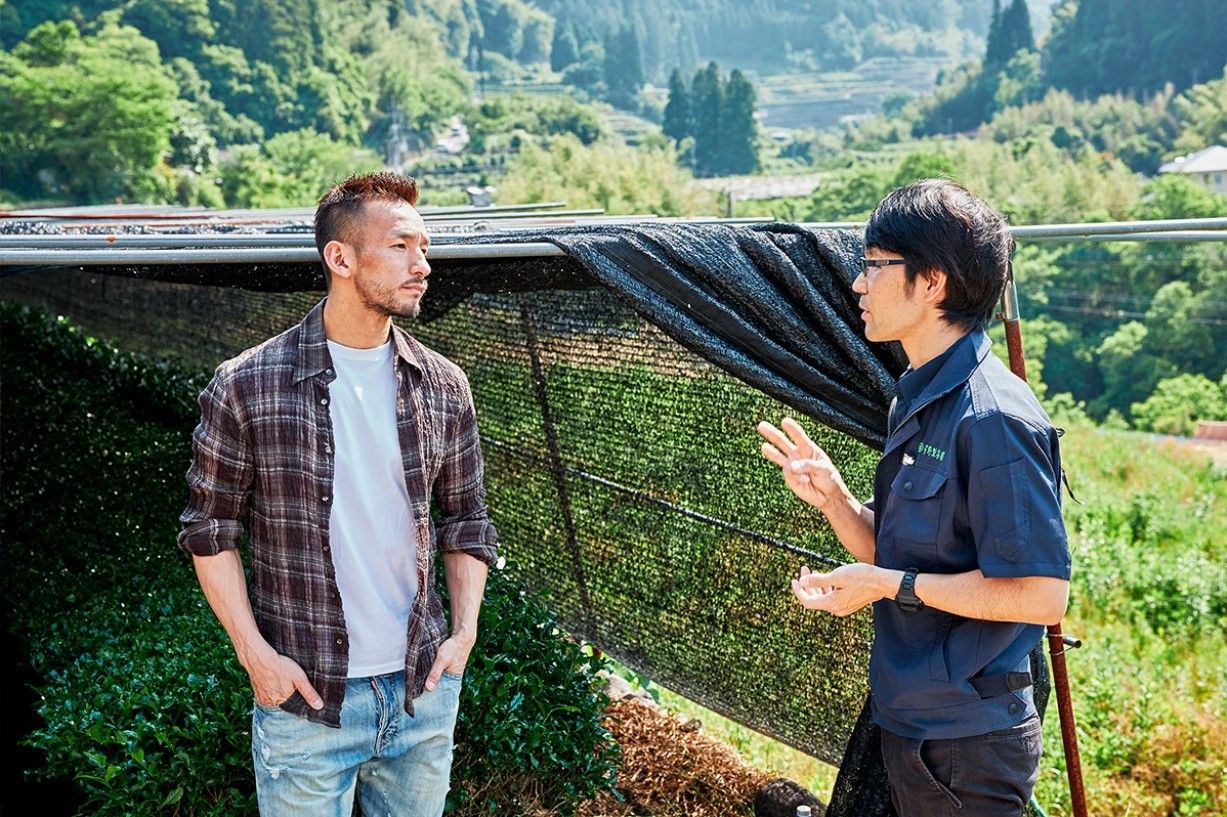 A tea farm manager, at right, discusses his crop with Nakata. (© Nihonmono)

After becoming one of Japan’s foremost sake experts, Nakata is now on the way to becoming a tea expert, too. And he’s not stopping there. He’s moving on to a variety of traditional crafts, as well as Japanese distilled spirits like shōchū, which he says he never used to drink.

“When I think about it, it wasn’t so much that I didn’t like shōchū, I just didn’t know anything about it. If you don’t have any basic knowledge, how can you choose what you like? If you choose something at random and don’t like it, then you might convince yourself that shōchū isn’t for you.”

Shōchū distilling is just as much a traditional craft industry as sake brewing is. As the man who brought Nihonmono to the world, Nakata viewed this drink as an inevitable progression.

“Since artisans don’t usually have any interest in talking to people who don’t know anything, I had to start by studying. I figured the bare minimum is to be prepared to give the time needed to do it better than anyone. It’s exactly the same as soccer. To get better, you have to train.”

When he was a soccer player, Nakata was not a man to speak of dreams. Which is why I am so surprised at the words that come out of his mouth now that he is a tea and shōchū lover.

“Aren’t these traditional industries part of our culture? Japan’s culture? If our projects are successful, some might say that Japanese culture itself will change as a result. At the very least, I want to create something we can leave behind for future generations.” 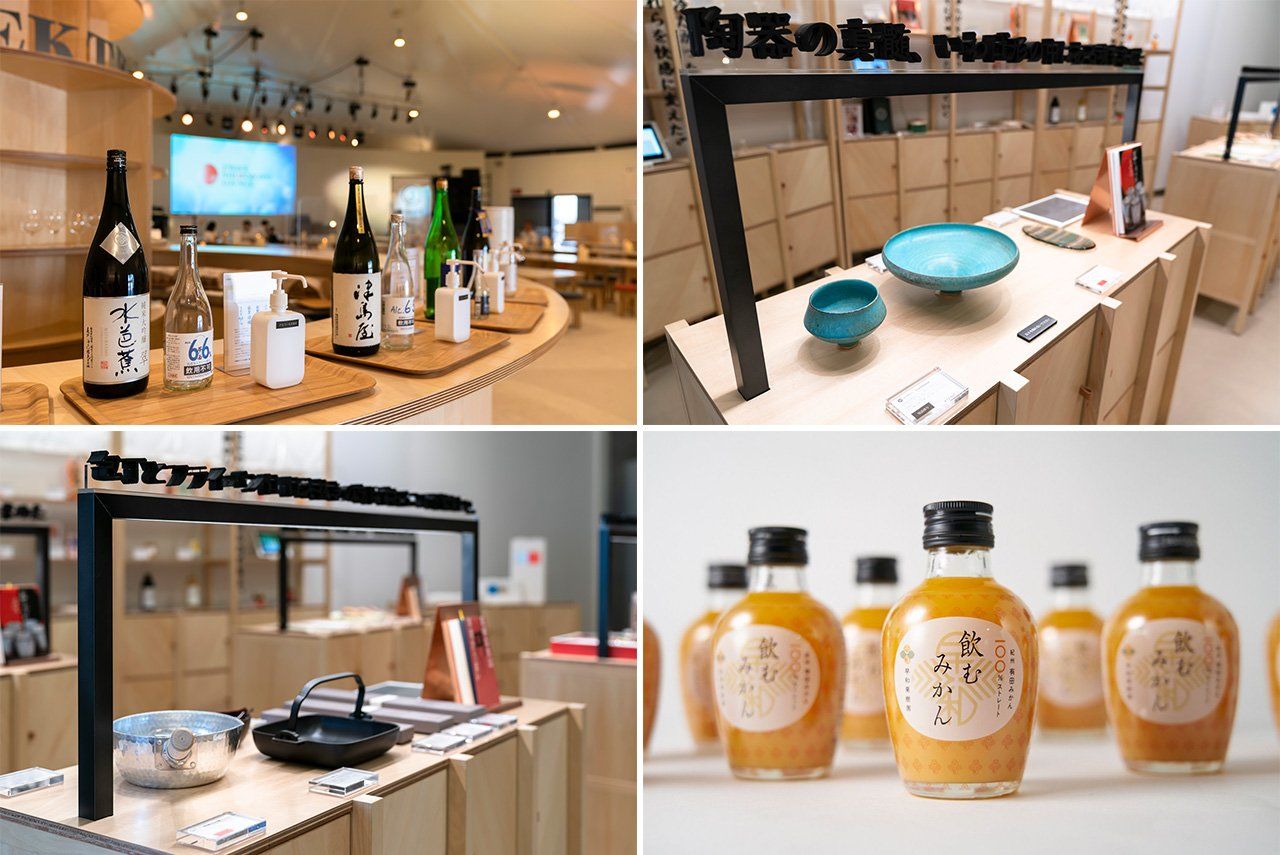 The latest project for Nakata is an e-commerce storefront, Nihonmono Store, which offers select items from the expert artisans he has introduced on his website. It launched on September 15.

Every item on the site is a luxury good selected by Nakata himself during his visits to the maker. In the future, he plans to feature a variety of specialists like chefs to act as guest curators to expand the range of offerings, and to grow sales of artisanal goods. He also plans on collaborating with makers to create new items.

This will mark the next step on Nakata Hidetoshi’s path to achieve his dreams. 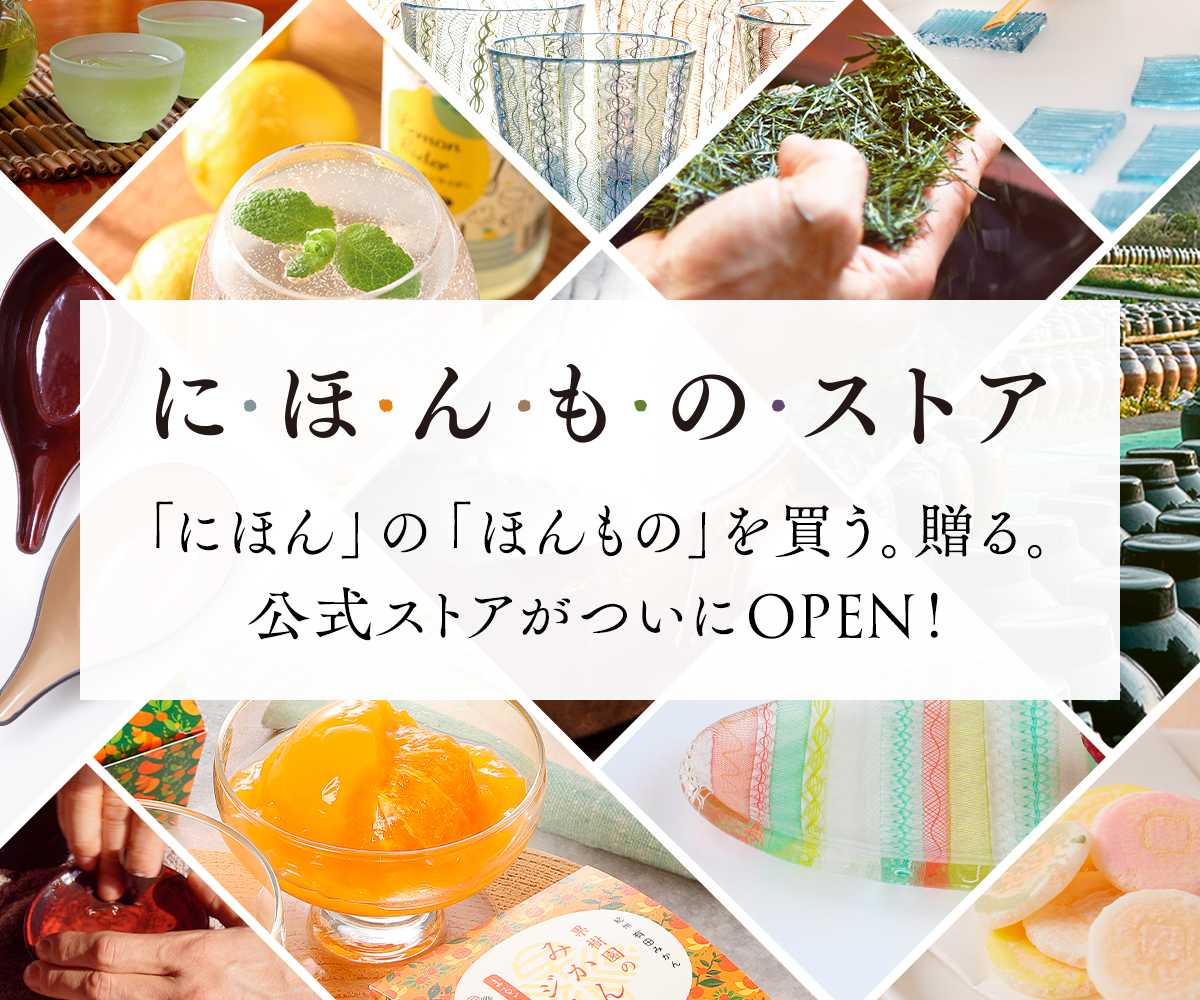 (Originally published in Japanese. Banner photo: Nakata Hidetoshi at J-Wave Nihonmono Lounge, a limited-time entertainment restaurant presented in collaboration with J-Wave radio. Nakata has collected a variety of hidden treasures from all over Japan for display, along with the specialty sake glasses he helped produce. © Uwadaira Tsunebumi.)