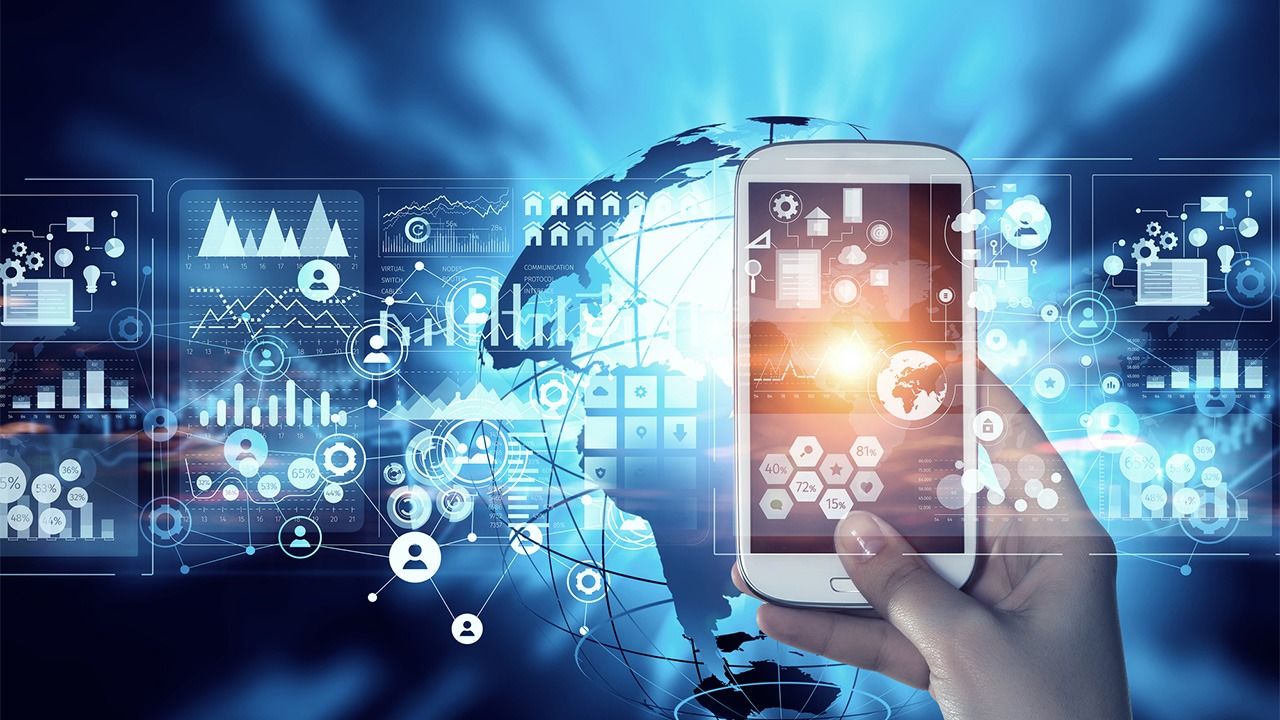 A Mirror on the Economy

Advertisements have long been said to be a mirror for the age. In the same way, advertising spending is a mirror for the economy. Since 1947, Dentsū has documented this spending in its Advertising Expenditures in Japan reports, noting how it has grown in tandem with Japan’s economy. As shown in the graph below, total ad spending correlates strongly with nominal GDP, while advertising expenditure as a percentage of GDP has remained stable. This spending is also a mirror on the media market, as is evidenced by the variation in the distribution of advertising expenditure among different media channels over the years. 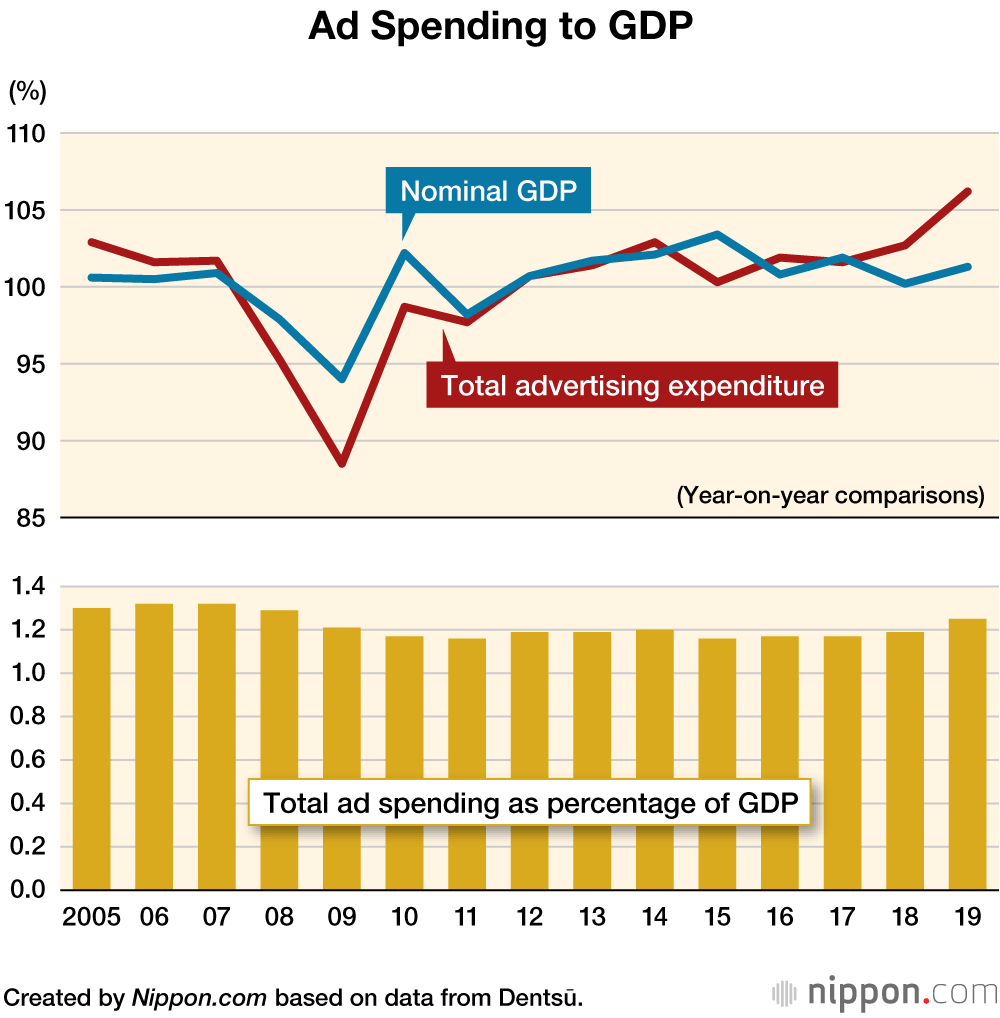 In 2019, television advertising was knocked off its long-held top spot by the Internet. Let us take a closer look at Japan’s advertising market and how it has changed over the years.

Released on March 11, the 2019 edition of Advertising Expenditures in Japan featured several illuminating findings. First, when estimates for the expanded digital sector and event advertising are figured in, Japan’s total advertising expenditure in 2019 was ¥6.94 trillion. The market has enjoyed eight consecutive years of growth, and the online advertising segment witnessed its second consecutive year of double-digit growth, eclipsing the market for TV advertising and exceeding ¥2 trillion for the first time ever.

The addition of the new category brings Japan’s total advertising spend to ¥6.94 trillion, an increase of 6.2% from 2018. As mentioned, however, the latest statistics include new and redefined categories, and therefore cannot be directly compared with the previous year, although when 2018’s categories are used to estimate total advertising expenditure in 2019, we get ¥6.65 trillion, which still represents an annual increase of 1.9%.

The finding that attracted the most attention was the fact that expenditure on online advertising had surpassed ¥2 trillion for the first time and now exceeded the spend on TV commercials. This can be attributed to an ongoing “digital transformation” as corporations shift their marketing activities online and the fact that consumers now get most of their information online, thanks to the ubiquity of smartphones and other connected devices. 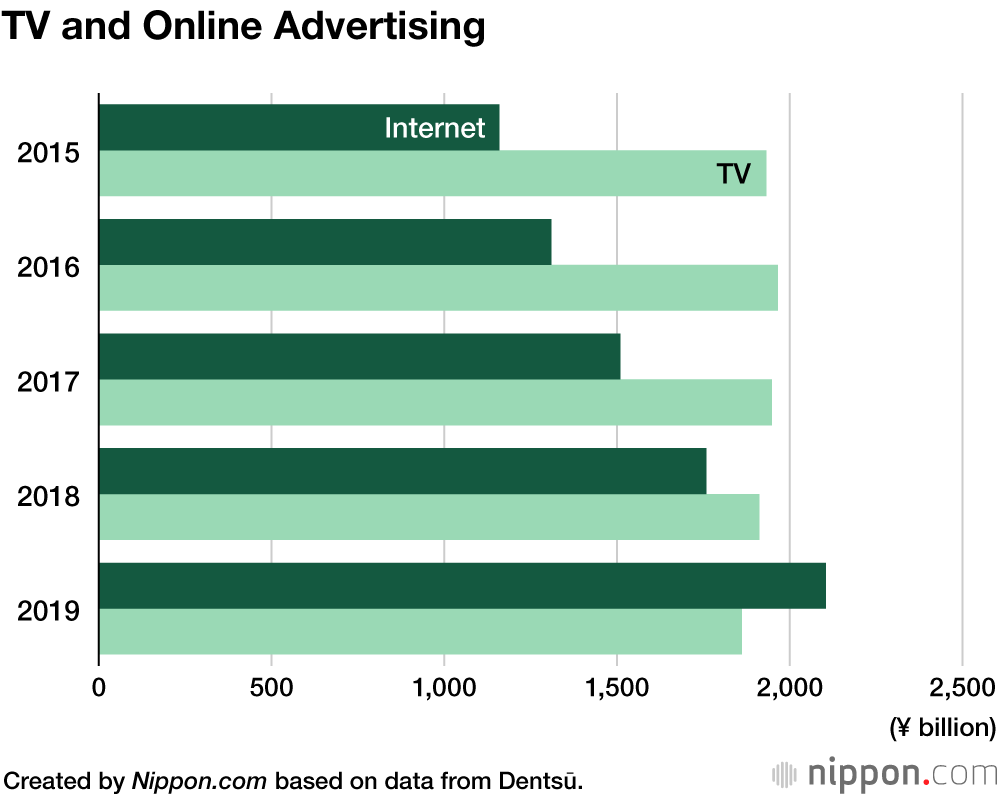 Advances in “integrated solutions”—encompassing channels from the latest online portals to legacy media sources—have also contributed to increased expenditure on online advertising. With the Dentsū Aegis Network’s January 2019 global forecast of advertising spend reporting that 38.5% of money spent on advertising globally went to digital ads, as opposed to only 35.4% for TV commercials, it was only a matter of time before the Japanese market went the same way, so those in the industry have taken the news in stride.

However, these results do not mean that the internet has swallowed up everything else. In fact, in the United States, the market for TV advertising is still growing—online advertising is simply growing faster. I believe that we should take the attitude that, if anything, the advent of the Internet has given us a clearer picture of the respective value of legacy media channels.

More Spending on the “Big Four” and Related Channels

Created by Nippon.com based on data from Dentsū.

While all of the “big four” legacy channels saw their advertising revenue fall compared with the previous year, spending on advertising increased in their digital spinoffs. This category comprises online ads placed by legacy media companies. For example, while magazine advertising fell by 9% from 2018, online magazine-related advertising expenditure grew by an impressive 20%.

According to estimates by the All Japan Publishers and Editors Association, the print and electronic publishing markets combined were worth ¥1.54 trillion in 2019, up 0.2% on the year before. This was the first increase recorded since AJPEA began collating statistics on electronic publishing in 2014, illustrating that advertisers are increasingly spending their money online, as society becomes more high-tech—a development underlined by the fact that digital publishing now attracts fully 20% of all ad spending in the publishing sector as a whole.

The promotional media category showed pronounced growth in “events/exhibitions/screen display.” This was in part a result of the redefinition of this category in response to increased interest in events. In today’s online age the increased emphasis on real-world experiences means that people are holding, and participating in, more events.

What Does the Future Hold?

The graph below shows advertising expenditure by medium, highlighting the marked growth in online spending. Online advertising overtook radio in 2004, magazines in 2006, newspapers in 2009, and finally television in 2019. While at first glance the online advertising market appears to be cannibalizing its competitors, the reality is a little more complex. 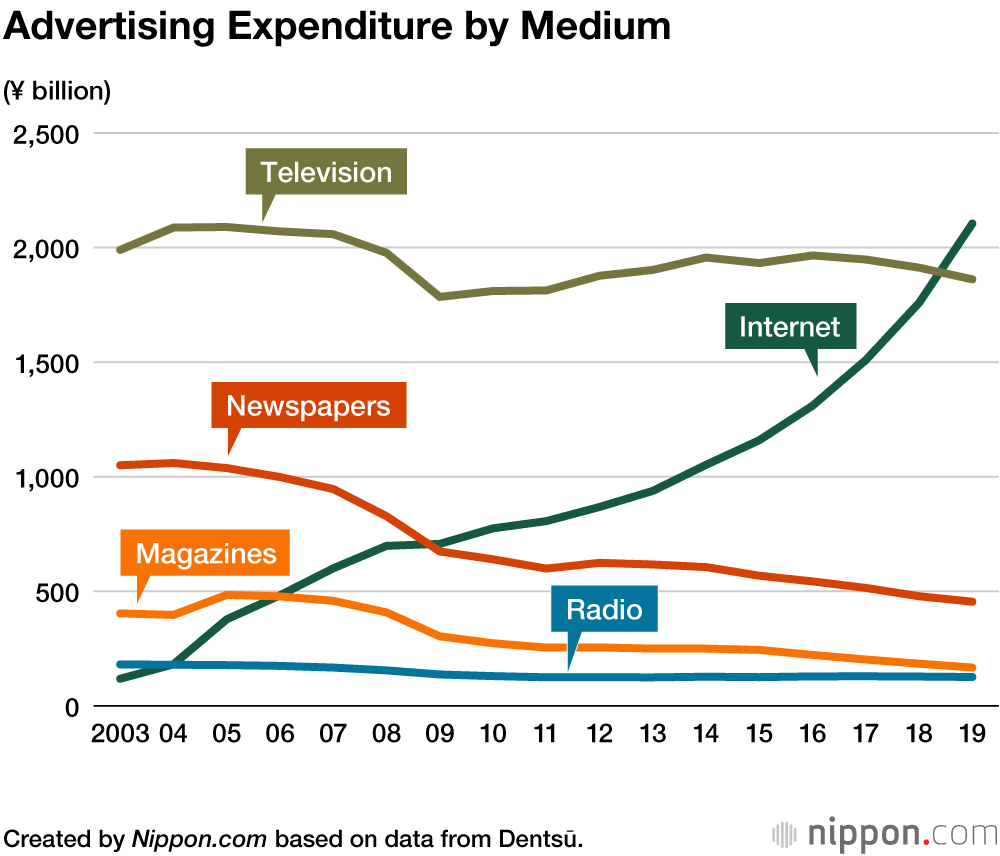 The online advertising market has grown with the increasing popularity of smartphones and the increase in programmatic advertising (paid search and other types of advertising that use big data to automatically or immediately optimize the advertisements displayed on the platform). Meanwhile, all traditional media channels have seen their advertising revenue fall since the advent of the Internet with the exception of television, showing that the Internet alone cannot explain falling newspaper circulations and the shrinking of the publishing market.

The graph below, based on data from ratings specialist Video Research, shows media interactions over the years. The trends are similar to those seen in the advertising expenditure graph. 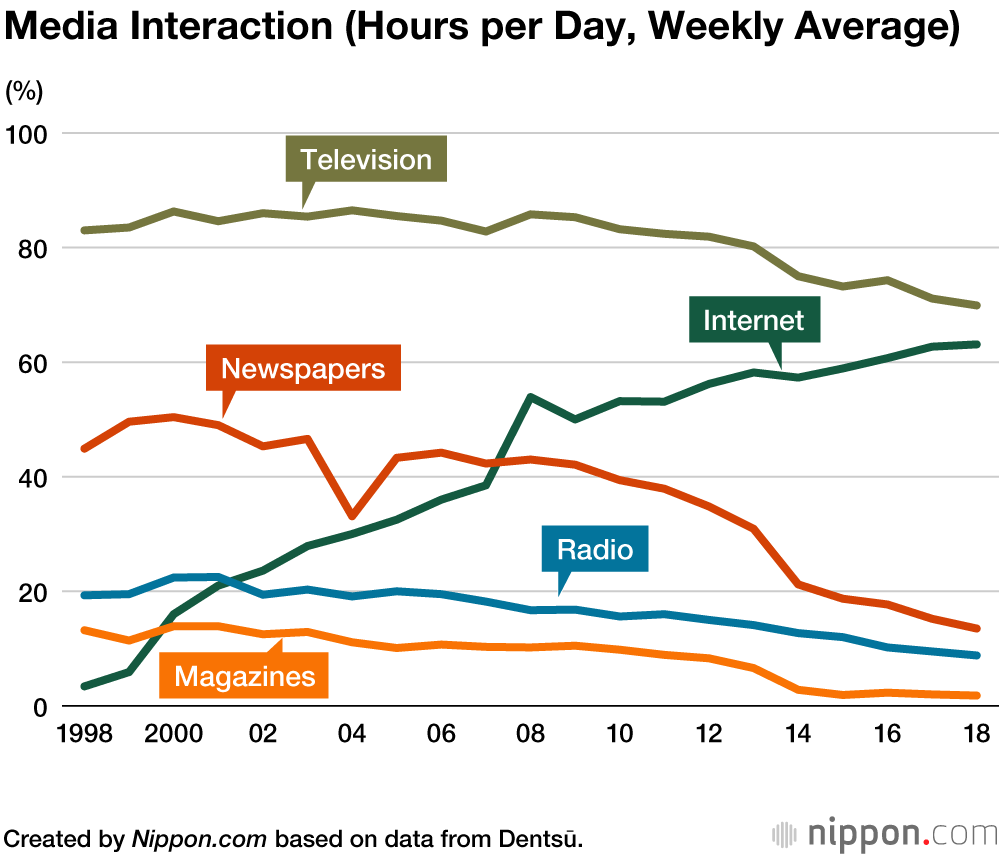 For an advertiser, the placement of an ad is not a goal unto itself. Rather, advertisers aim to efficiently communicate their message to consumers to improve brand recognition, thereby encouraging purchasing behavior. Advertisers are therefore interested in which medium their consumers are using, as an advertisement placed in a medium with a higher rate of interaction will have a greater effect.

The growth in expenditure on online advertising is attributable firstly to the practice of using smartphones to obtain information on a daily basis, which is prevalent not only amongst the younger generation, but also increasingly among the middle-aged and elderly. This has driven an increase in online advertising.

Another significant factor is rapid advances in technologies for combining browsing histories, purchase histories, and demographic data—in other words, data-driven marketing (a technique in which a range of data, including information on sales and clients, and web analysis are used to plan and make business decisions). This has enabled advertisers to target individual consumers, thereby conveying their messages more efficiently.

While the rapid technological advancements that have enabled this efficient deployment of advertising carry significant benefits, the Internet also brings with it problems, like fake news and fraud. Furthermore, 25 years since the first online ads were placed, many problems are still unable to be solved with exclusively Internet-based solutions, and in many areas, the Internet still cannot match the credibility and reach of established media. Therefore, as long as consumers continue to obtain some of their information from offline sources, our ability to efficiently marry legacy media with the Internet will become more and more important.

As exemplified by the “stay-at-home economy,” a phrase coined during the coronavirus pandemic, as consumers wake up to discover a “new normal,” consumption patterns, and the way we interact with media, are changing. It is easy to see how these changes could cause advertisers’ behavior to change as well, in turn bringing about a change in the way we use the Internet and other media.

From a media perspective, we increasingly live in an age in which everything comes down to whether messages from advertisers and other content can successfully be incorporated into the information-gathering habits of readers, listeners, and consumers.