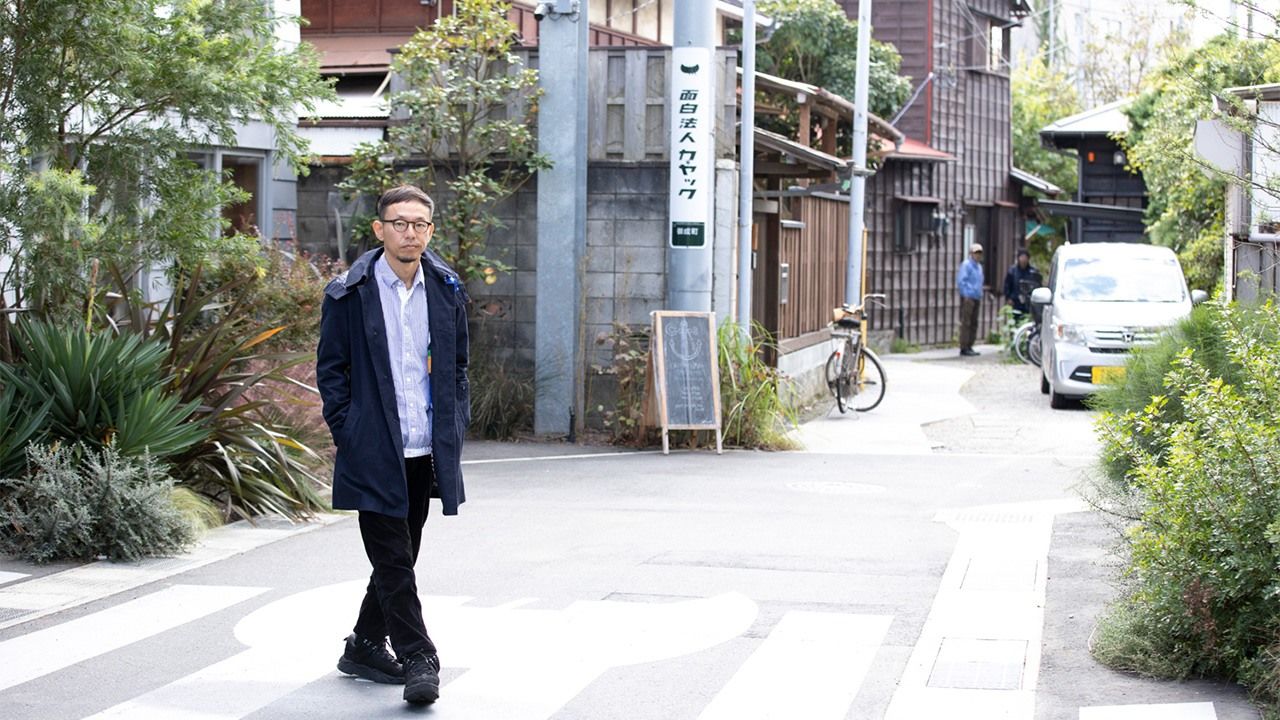 Politics Society Lifestyle Work Technology Jan 4, 2021
Kayac is a self-described “fun-loving creative business” headquartered in the historic town of Kamakura in Kanagawa Prefecture. Alongside its IT work, the company provides matching services for people looking to relocate, and is passionate about tapping the unique strengths of local communities to bring fresh ideas and new vitality to regional economies. 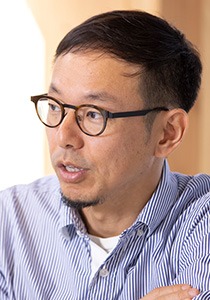 CEO and representative director of Kayac . Born in 1974 in Hong Kong. Joined Sony Music Entertainment after graduating from Keiō University. In 1998, established digital content creator Kayac, headquartered in Kamakura, Kanagawa Prefecture. Serves on the judging committees for numerous web advertising prizes, and is a leading promoter of innovative new approaches to corporate life and workstyles. Publications include

The head office of Kayac, described by co-founder and CEO Yanasawa Daisuke as a “fun-loving creative business,” is tucked away on a side street five minutes’ walk from the west exit of Kamakura Station. The company’s core business is digital content creation. Kayac works on everything from social media and web promotions to planning and developing social games, esports, and virtual reality, with a focus on unique and distinctively Japanese content. Recently, the company collaborated with publisher Shūeisha on a smartphone app based on the phenomenally successful hit manga Demon Slayer: Kimetsu no yaiba. The company has also been responsible for successful events like a horror-based online meetup that attracted 20 million visits in a month, and the pop-up Unko Museum, a poop-themed attraction in Tokyo and Yokohama that drew more than 100,000 visitors in two and a half months. Alongside these endeavors, the company plays a key role in a number of original projects to help create new connections and relationships in the local community. These include Smout, a matching service for people looking to relocate away from the big city, and an innovative type of workers’ canteen open to anyone who works in the city of Kamakura. 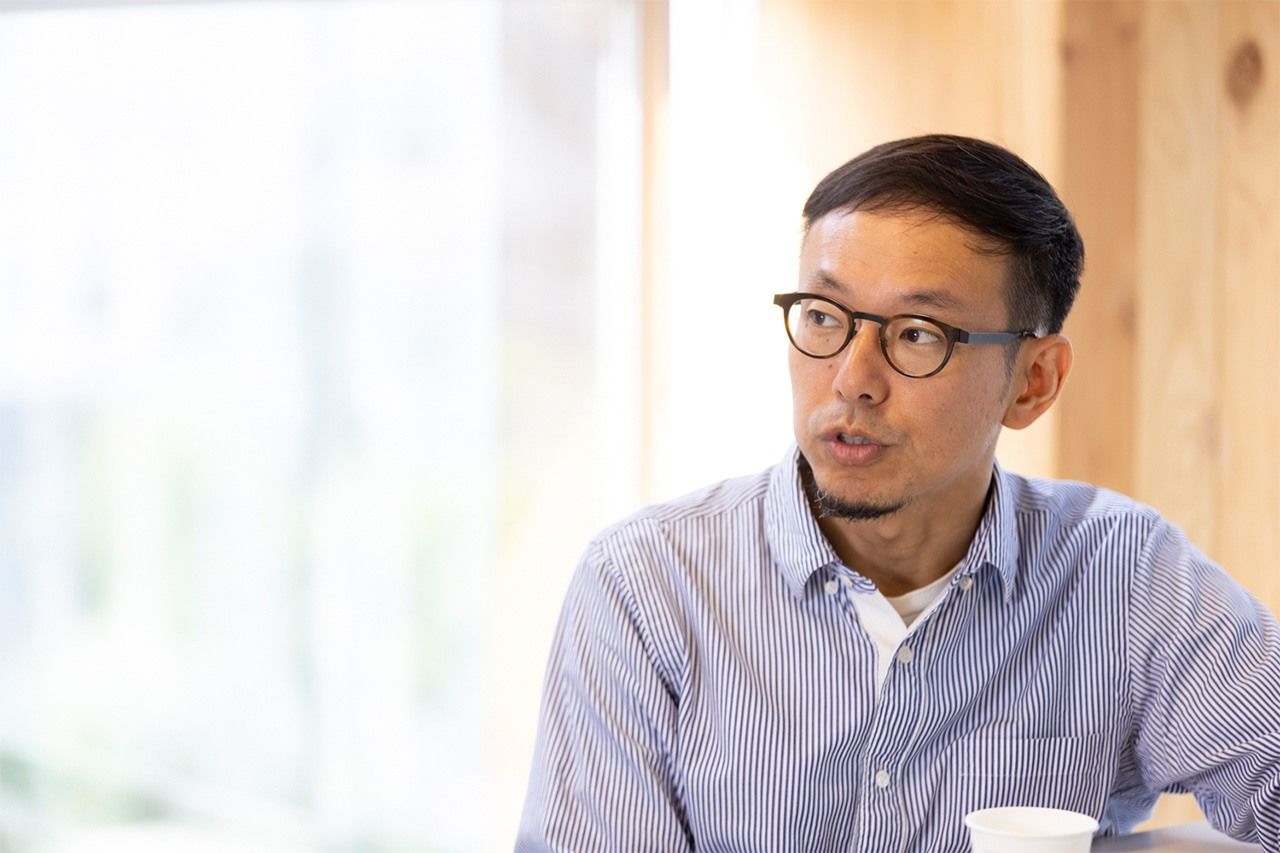 Out to Change Society

Yanasawa founded the company with two friends from shortly after graduating from university in 1998. The founders agreed that they wanted their company to be different, and decided to give it the official name of omoshiro hōjin Kayac or “fun-loving corporation Kayac.”

The reasons for locating the company’s head office in Kamakura were simple. “It’s a place we all loved when we were students,” Yanasawa says. “It’s just 55 minutes by train from Tokyo, and yet you’ve got the sea and the mountains, and all the cultural attractions that come from the city’s rich history. And more than anything, we knew that we didn’t want to stay in Tokyo and ride into work on those packed commuter trains every day.” Yanasawa himself lives in Kamakura, and the company encourages employees to become part of the community by living close to head office wherever possible. Even so, the company also has a studio office in Akihabara for employees unable or unwilling to relocate from the capital. 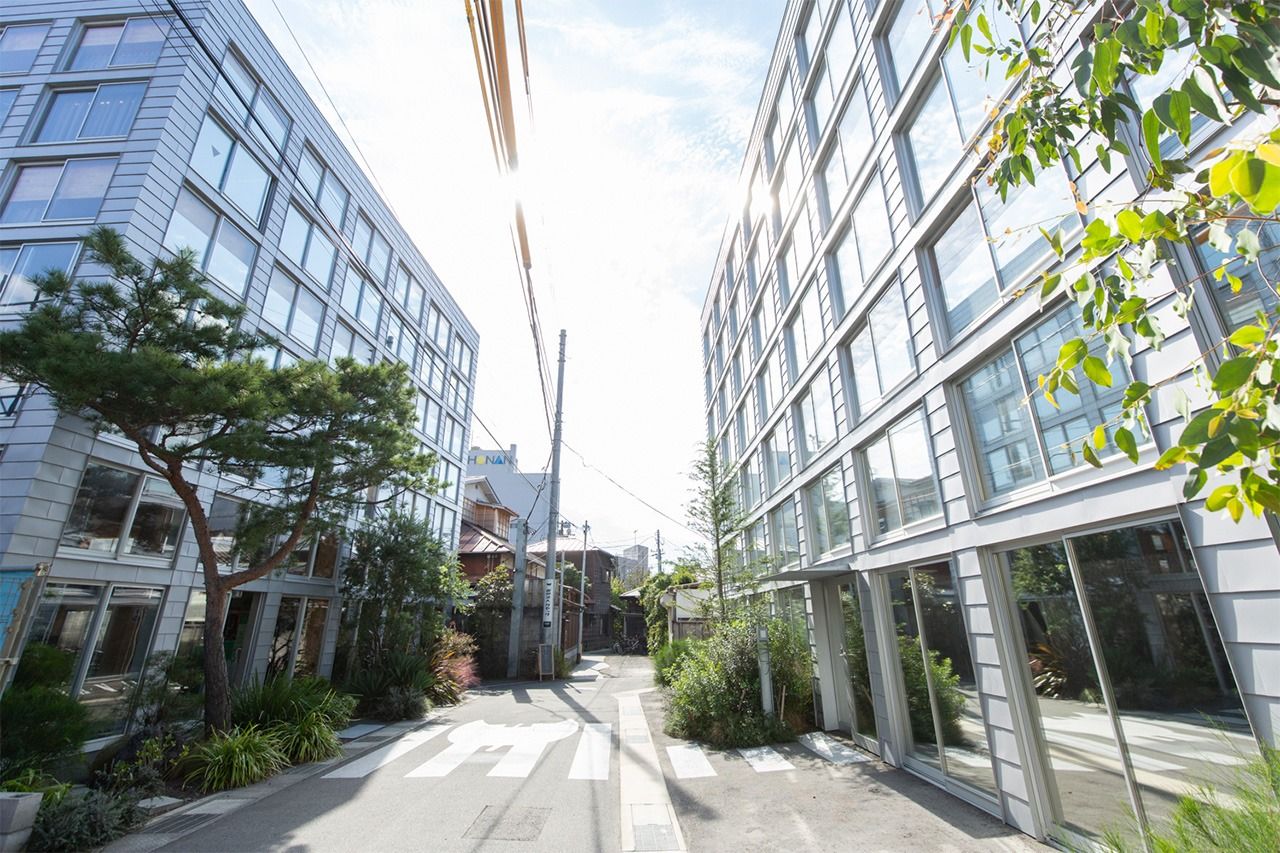 The company’s two glass-fronted office buildings are located on a side street surrounded by traditional houses used as working spaces.

A Silicon Valley on the Kanagawa Coast

To increase the number of people who shared their vision of the world, Yanasawa and his friends decided that the place to start was in Kamakura itself. In 2013, they launched the Kamacon group in association with local entrepreneurs and CEOs of Kamakura-based start-ups, with Kayac initially playing a central role. Kamacon brings together local business leaders with people from government and NPOs for brainstorming sessions and lively exchanges of ideas. The name was inspired by a remark made in a newspaper interview about the new concept, when someone compared the burgeoning culture of venture capital in the area to Silicon Valley, and joked that the new project should aim to create a similar “Kamacon Valley” at Kamakura. Today the organization has 43 corporate member companies and 142 individual members.

At regular monthly meetings, members present their own projects, and join in brainstorming sessions for exchanging ideas, selecting projects, and recruiting people to carry them out. Yanasawa says these sessions are like a “secret ingredient” crucial to his vision of success.

This brainstorming-based style has inspired initiatives throughout the country. There are now similar organizations in nearly 50 communities nationwide, including “Fukucon” in Fukuoka, Northern part of Fukuoka Prefecture, and “Ishicon” in Ishigakijima, Okinawa. Yanasawa says he started the concept almost casually, with the idea that he could quit whenever he felt like it. In fact, he has ended up attending every month since the initial preparation period in 2012. 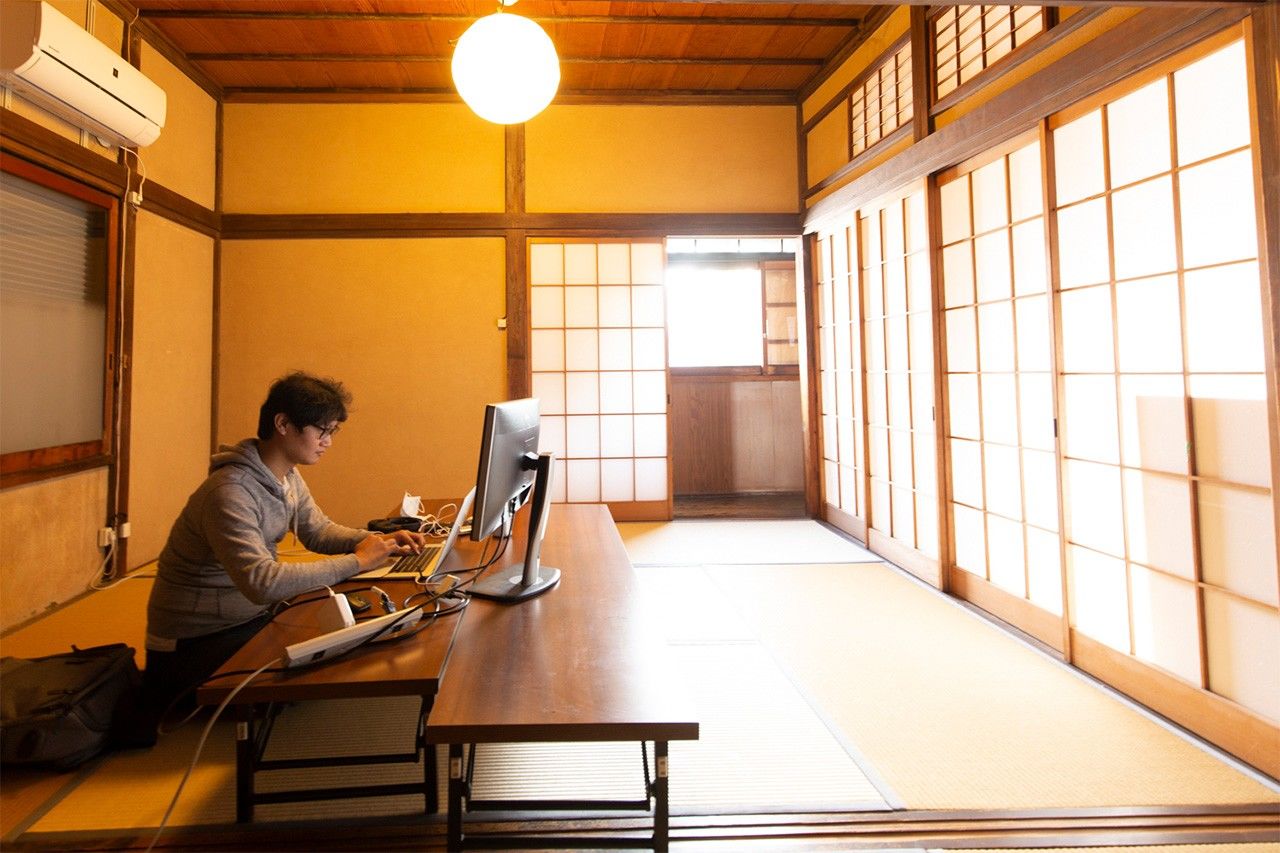 Yanasawa says that this approach to brainstorming has been an essential part of everything the company has done since it was founded. He says that when people start to think about their work as something that affects them personally, something in which they have agency, their whole perspective shifts up a level. A line manager starts to see things from the perspective of a section head, and the section head starts to look at things from the perspective of a department leader. After more than 20 years of this approach, Yanasawa is convinced that brainstorming is a vital part of professional development, both for individuals and the organizations they belong to—as individuals learn to see themselves as personally invested in what the company is doing, the quality of teamwork inevitably improves.

Google famously has a meditation room at its headquarters. Yanasawa says that at Kayac, brainstorming performs a similar function. He even believes that whether a company is carrying out regular brainstorming can serve as a useful indicator of the health of the company.

A Cafeteria for All the City’s Workers

One project born of these Kamacon brainstorming sessions is the Machino “Shine” Shokudō, an innovative employees’ canteen. The idea began as a way of improving employees benefit packages; as of November 2020, 23 Kamakura-based companies and organizations participate in the scheme, and the cafeteria can be used by anyone who works in the city. Special discounts are available for employees at participating companies.

“Since Kamakura is a popular tourist destination, there are often long lines outside all the restaurants at lunchtimes,” says Watanabe Yūko, a member of the Kayac staff. “This restaurant has really made life a lot easier since it opened.” A total of 50 local restaurants take turns each week to offer lunch and dinner options on weekdays. A range of local culinary talent, from Hachinoki, a Michelin-starred restaurant in Kita-Kamakura, to innovative young owner-chefs, combine to offer an impressive range of tasty and healthy choices. On weekends, the cafeteria holds events including talks with local authors, helping to create new connections among people living and working in the local area. 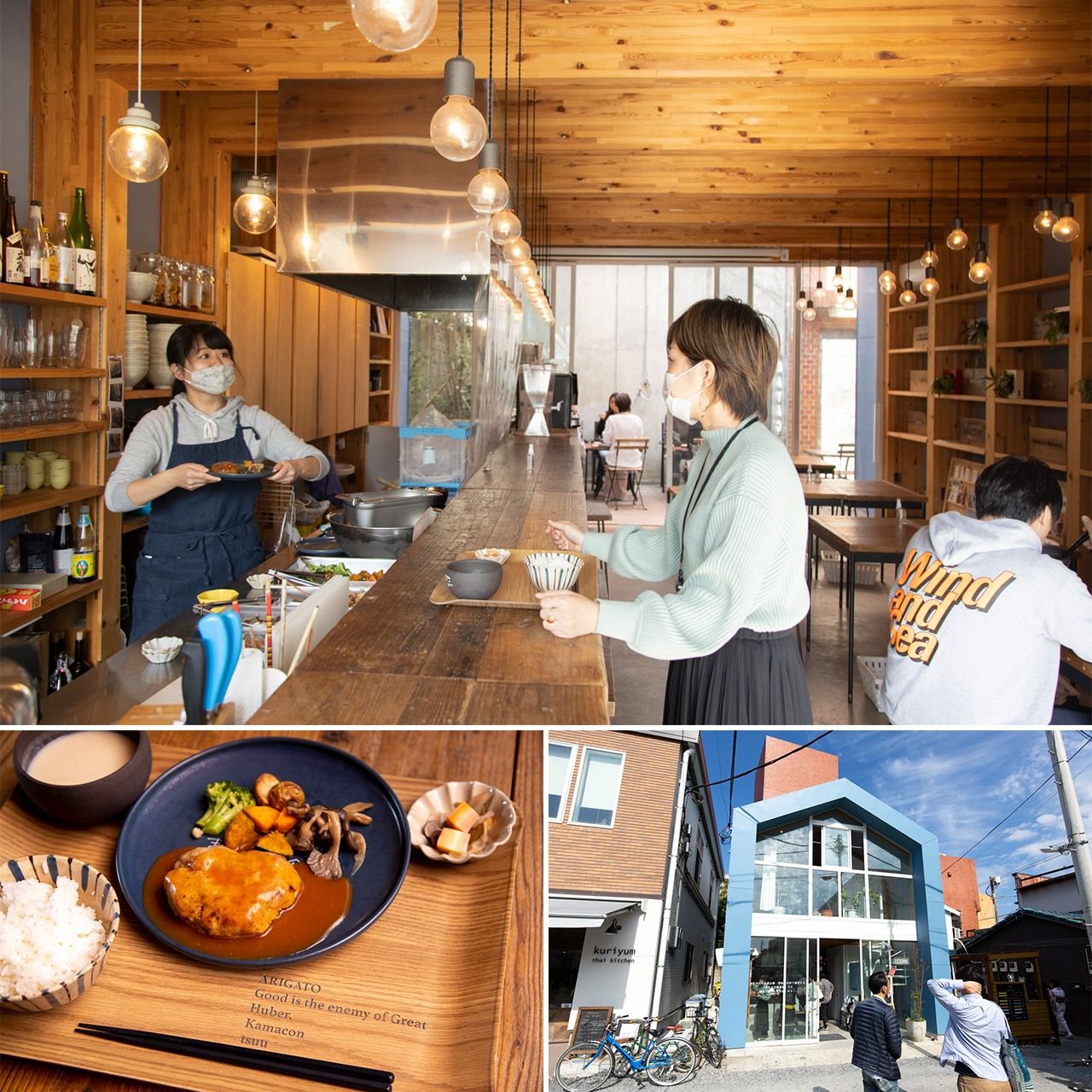 Local workers get lunch at the Machino “Shine” Shokudō cafeteria. This week, the lunches were provided by Inoue Kamaboko, which specializes in processed seafood products. With a discount, this hamburger lunch costs just ¥800. Messages from participating companies are printed on the cafeteria trays (left). The cafeteria is located within easy walking distance of the station and Kayac’s head office.

As manager of his own company, Yanasawa says that who you work with is possibly the most important thing of all. Of course, what you do at work is important too—but Yanasawa believes that people’s levels of happiness and satisfaction at work vary considerably depending on where they are located, and who they are working with. This focus on the local community and human connections is the source of Kayac’s ability to keep coming up with new ideas.

Alongside efforts to develop a new model of local capitalism rooted in the local community, since 2018 Kayac has also run Smout, a matching service that provides support to people looking to relocate away from the big cities to other parts of the country in need of young workers with fresh ideas. Users register their personal data and skills on a server, and the service introduces users to concrete positions with local governments and other employers that match their skills and experience. Over the past six months, the average number of people registering each month has tripled from 450 to 1,400. Smout ranks locations around the country based on the frequency of mentions in online sources and social media. The results database enables users to see at a glance which areas are the most popular.

At the moment, 600 of Japan’s 1,700 local governments use Smout to approach potential employees. Users have become interested in the service for all kinds of reasons. Yanasawa mentions one case of an employee troubled by seasonal pollen allergies who used the service to relocate temporarily to Hokkaidō to avoid the worst of the allergy season in the rest of Japan. Ads posted by local governments looking for people willing to relocate to help revitalize their areas immediately draw large numbers of applicants. The service has become more popular than ever during the coronavirus crisis, as working from home and more diverse work patterns have become a reality for many. 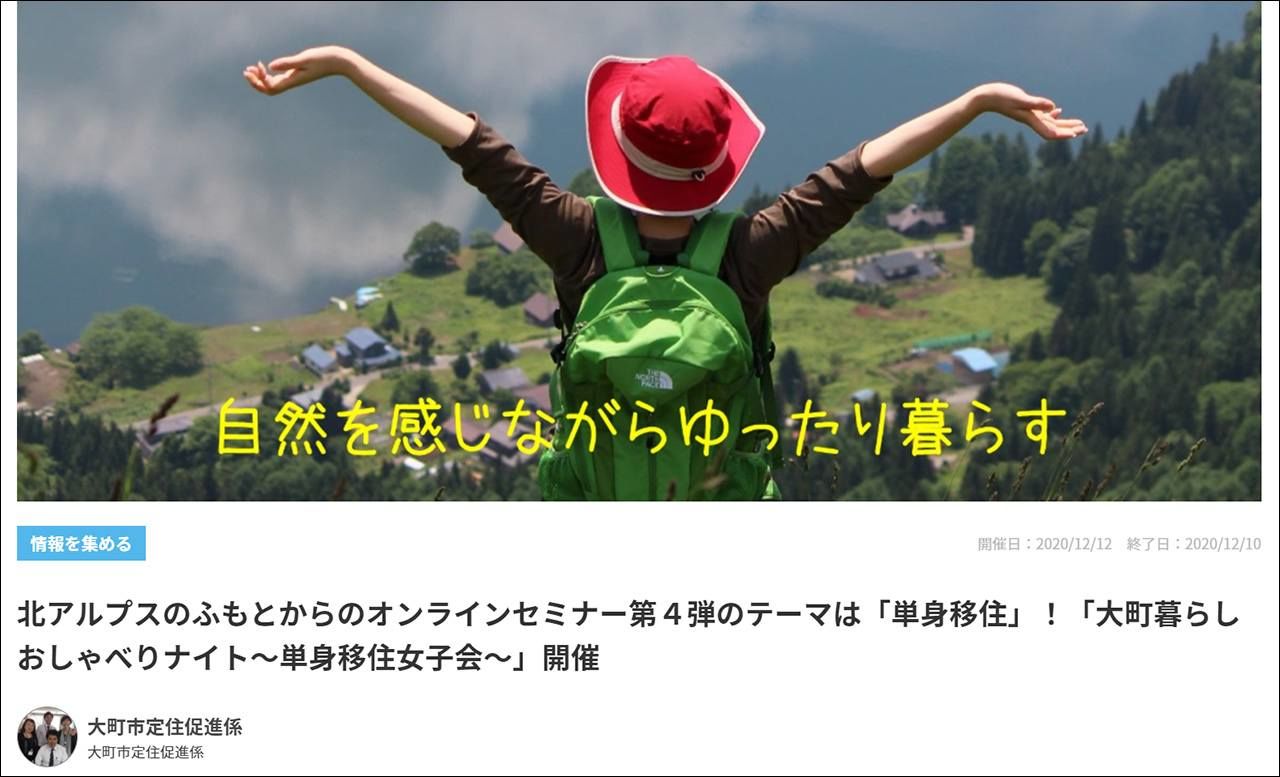 This recruitment ad on Smout tempts applicants with the promise of a slower pace of life, surrounded by the natural beauty of the Japanese Alps.

Developing a New Kind of “Regional Capitalism” from Kamakura

Kayac is the only Kamakura-based company on the Tokyo Stock Exchange, where it has been listed since 2014 on the Mothers index. Despite this, Yanasawa and his team are keenly aware of the negative aspects of conventional capitalism, including widening income disparities and the looming environmental crisis.

This led Yanasawa to start thinking of new metrics that could be used to create a more sustainable form of capitalism without changing its fundamental mechanisms. Having experienced for himself through Kamacon the diversity and social capital possessed by local communities, Yanasawa began to feel that regions and communities might hold the key for a new metric for increasing human happiness.

Yanasawa believes that the secret to making capitalism more sustainable lies in coming up with ways to increase community capital: in addition to the conventional types of capital (financial resources and productivity), local communities also possess social capital (connections between people) and environmental capital (natural resources and culture). How can these forms of capital be increased, and what metrics are needed to measure them? “Whether it is local landscapes and scenery, or locally distinctive creative content, conveying the distinctive strengths that make each region unique, and doing it in a way that people can understand, is a surefire way to boost that region’s popularity,” Yanasawa writes in his book Kamakura shihonshugi (Kamakura Capitalism). 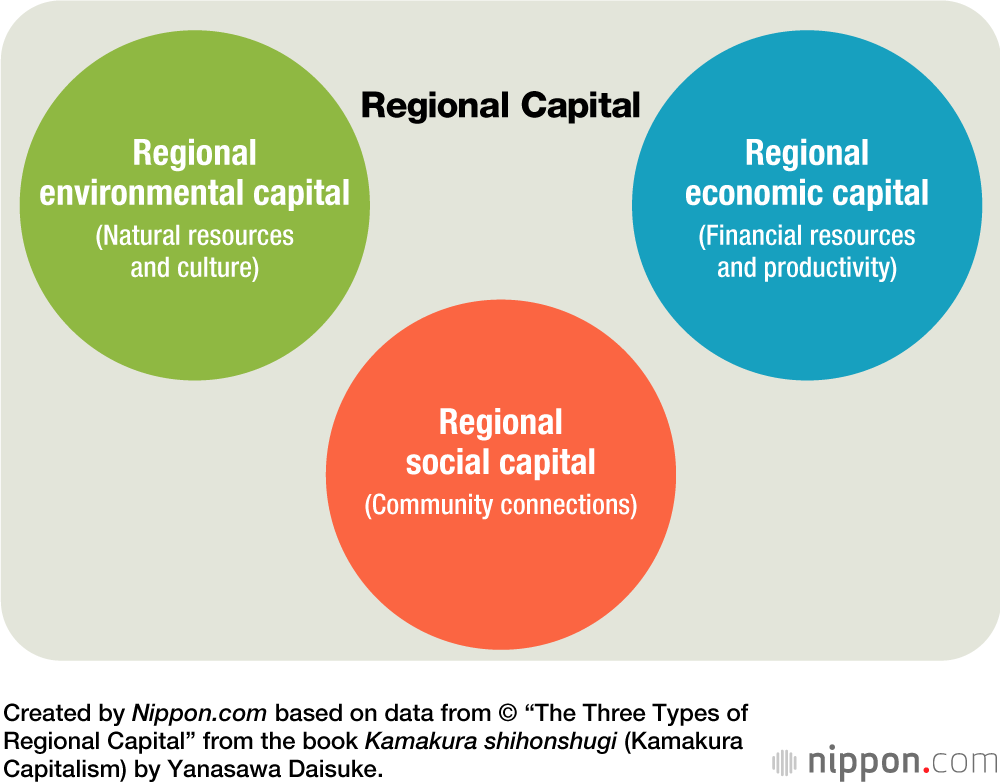 Twenty-two years after the company was founded, today Kayac has grown to have more than 300 employees. Yanasawa recently read Trailblazer: The Power of Business as the Greatest Platform for Change, by Marc Benioff and Monica Langley, and identified strongly with the idea that “Doing well by doing good is no longer just a competitive advantage. It’s becoming a business imperative.” Yanasawa says he shares the sense that we are moving into an age where consumers and employees will actively seek out socially responsible companies. Part of the reason for this is the rise of social media, which mean that employees can now share a company’s values with a wider audience than ever before.

“It’s when you look beyond the simple pursuit of profit toward something deeper, something akin to philanthropism and the idea of working for the good of society, when you feel satisfied in your own self with what you’re doing, that’s when you are able to make a positive contribution. And this isn’t something that is limited only to entrepreneurs and company executives. It’s something that should engage every single employee. When individuals are invested in making a meaningful contribution, that is how it will gradually spread through society,” says Yanasawa, his eyes fixed firmly on the future. 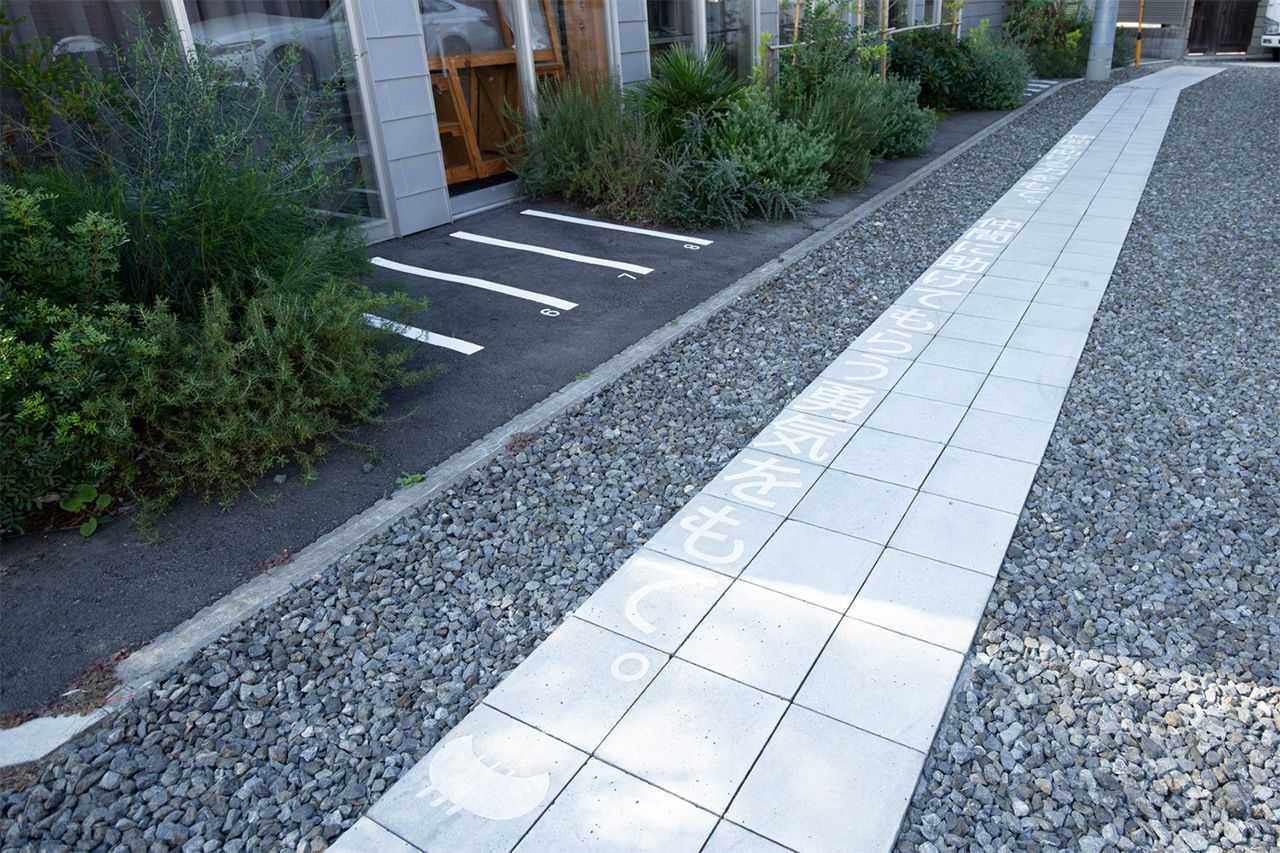 A footpath next to the office carries the message: “Have the strength to help others, and the courage to let them help you.”

(Originally published in Japanese on December 9, 2020. Banner photo: Yanasawa Daisuke in front of the Kayac head office. All photos by Kawamoto Seiya.)