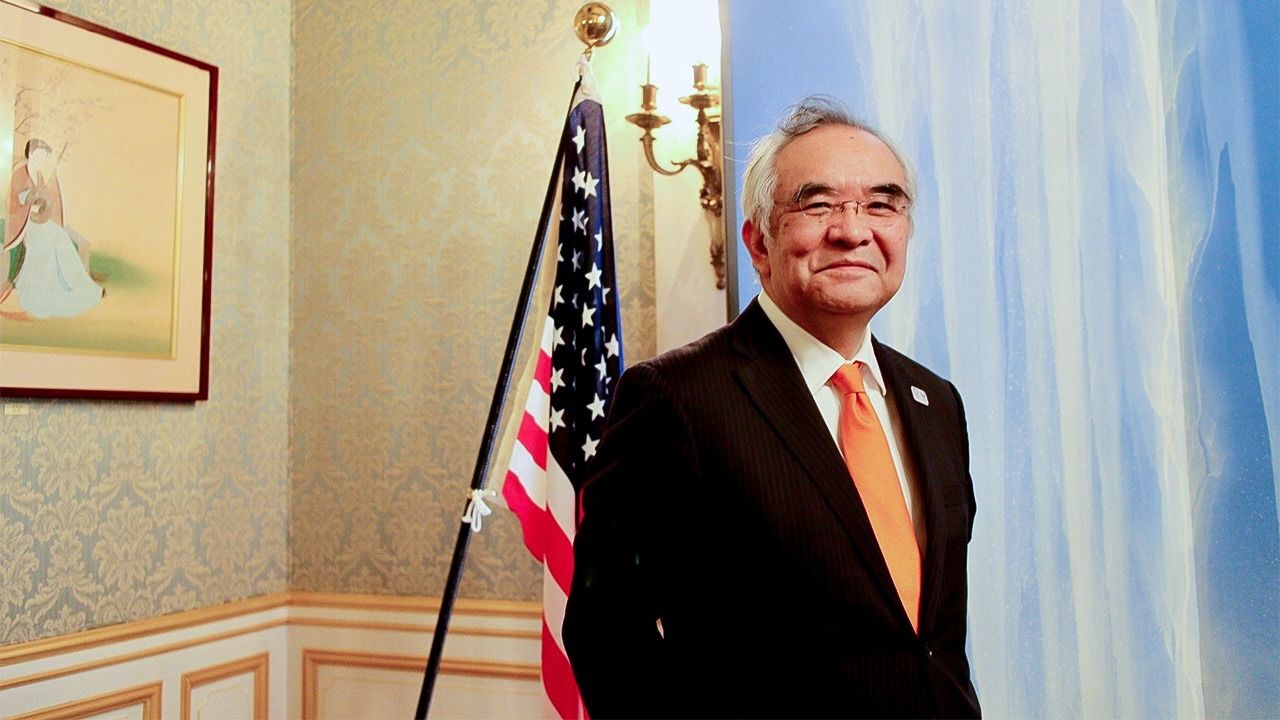 Politics Global Exchange Feb 15, 2021
Ambassador Yamanouchi Kanji of the Consulate General of Japan in New York became an internet sensation in 2020 for his electric guitar performance of “The Star-Spangled Banner,” a special project in celebration of the US Independence Day. A reporter sits down with the veteran diplomat to discuss his approach to supporting bilateral relations during the COVID-19 pandemic. 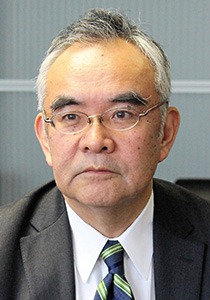 Ambassador and consul general of Japan in New York. Joined the Ministry of Foreign Affairs in 1984, where his main focus has been US-Japan relations. Previous positions include executive secretary to the deputy chief cabinet secretary and executive secretary to the prime minister, director of the Ministry’s First North American Division, and deputy director-general of the Asian and Oceanian Affairs Bureau, minister at the Embassy of Japan in Washington DC, director-general of the Economic Affairs Bureau of the Ministry, and one of the architects of the Trans-Pacific Partnership. His current post began in October 2018.

Yamanouchi Kanji, Japan’s top ambassador in New York, seems an unlikely rock-and-roller. In a video that made the rounds on social media in July 2020, the grey-haired ambassador, dressed in a dark suit and sporting a red bow tie, stands between a Japanese and American flag as he cordially greets viewers. After a brief speech, he swaps his jacket for a Stratocaster and proceeds to hammer out a Jimi Hendrix–inspired rendition of the US national anthem, complete with whammy bar and heavy distortion.

The response was overwhelmingly positive. Within six days of its upload, it had amassed some 260,000 views on Facebook alone. Comments such as “So awesome!!! We love you Japan!!!!” and ”Sir, you are a superb musician! You give me hope in this dark world.” flowed in, and soon the video was trending across the globe.

It all began with a suggestion from the consulate’s public relations team. Why not celebrate US-Japan ties with a performance for the July 4 holiday? It would be a way to express respect and gratitude to Japan’s most important ally on its key national holiday, as well as to mark the 160th anniversary of the first Japanese official delegation to the United States in 1860.

The consulate also wanted to include a message of appreciation for the nation’s medical personnel and essential workers, and hoped to provide a moment of reprieve to citizens during the pandemic.

With these goals in mind, the ambassador explains, “a run-of-the-mill performance was out of the question. I wanted to add a spin to it, in a way that would resonate in the hearts of our American friends.” Inspiration eventually came to him in the image of Jimi Hendrix.

“I have always loved all genres of music,” says Yamanouchi. He recalls a childhood surrounded with instruments like guitars and an organ, and his mother, who was also fond of music. He discovered Western rock and roll in his adolescence through late-night radio, prompting him to take up the guitar, form a band with friends, and eventually begin playing at events like school festivals.

These youthful memories brought Yamanouchi back to Jimi Hendrix’s legendary performance of “The Star-Spangled Banner” at Woodstock in 1969. The heavily distorted rendition of the US national anthem enthralled the younger generation with its raw energy, yet also received rebukes from conservatives at the time. A half century later, though, it is remembered as a defining moment in both music and US history. To Yamanouchi, Hendrix’s performance and its reverberations are “pure American,” embodying the nation’s values of freedom and diversity.

Keenly aware of his diplomatic role, however, the ambassador and consulate staff carefully planned the video to ensure a respectful tone. Everything from his wardrobe to the performance’s opening remarks was meticulously designed to bring out the project’s core message of gratitude for the host nation.

The results stunned even Yamanouchi himself. Prominent Americans in Japan and elsewhere, including the chargé d’affaires ad interim at the US embassy, Joseph M. Young, and leading scholar of Japanese literature and professor emeritus at the University of Tokyo, Robert Campbell, offered high praise for the performance. The New York Post and other outlets also picked up the story.

“It certainly was beyond my expectations,” laughs Yamanouchi. “It was a particular honor when Dennis Shea, the US ambassador to the World Trade Organization in Geneva, brought up the performance during a trade policy review session.”

This was not Yamanouchi’s first foray into musical diplomacy. He recounts his time at the Japanese embassy in Seoul in the early 2000s, when he and other staff would informally play gigs on their days off. “Relations were very strained at the time, but a rock band of Japanese diplomats was novel enough that the locals would come to hear us play,” he says. “For me, I was happy to help ease tensions a little by doing something that I loved.”

He has continued this approach in the United States, forming bands while at the Japanese embassy in Washington DC and at the Consulate General in New York to deliver performances at annual events such as the Sakura Matsuri in Washington and Japan Day in New York.

The consulate is also finding ways to support local musicians during the pandemic era. The most recent initiative is a livestreamed “Friday Night Live” concert hosted at the ambassador’s official residence on the third Friday of each month, featuring resident Japanese artists who have found themselves without a stage.

“The economic fallout has hit entertainers especially hard,” says Yamanouchi. “There are so many talented people in this city who now have no place to share their art, and we wanted to do something about that.”

Onsite attendance is limited to under 10 people due to COVID-19 safety measures, but the small number has not dampened the excitement of musicians who longed to play again before a live audience. Guest performers so far have included a jazz trio, Jazz Triangle 65–77 in October 2020; a koto, shamisen, and cello team, Duo Yumeno in November; renowned classical pianist Kigawa Takayuki in December; and an amazing Jazz quartet led by Elena Terakubo in January 2021. An archive of the concerts is also available on the consulate’s official YouTube channel for those who missed the Facebook livestreams.

“Even if we could fill our physical venue to capacity, we would end up with a hundred people at best,” notes the ambassador. “Online, though, we can quickly reach thousands. It’s a tangibly effective way to support our artists while expanding Japan’s soft power outreach.”

Outside of music, the consulate also supported visual arts by teaming up with the Nippon Club for the November online art exhibition “Forward Together!” Seven works were selected for a special Ambassador’s Award and temporarily display at the Ambassador’s Residence. Says Yamanouchi, “It is a real joy to be able to help artists and also give my guests a chance to enjoy some contemporary Japanese artworks.” 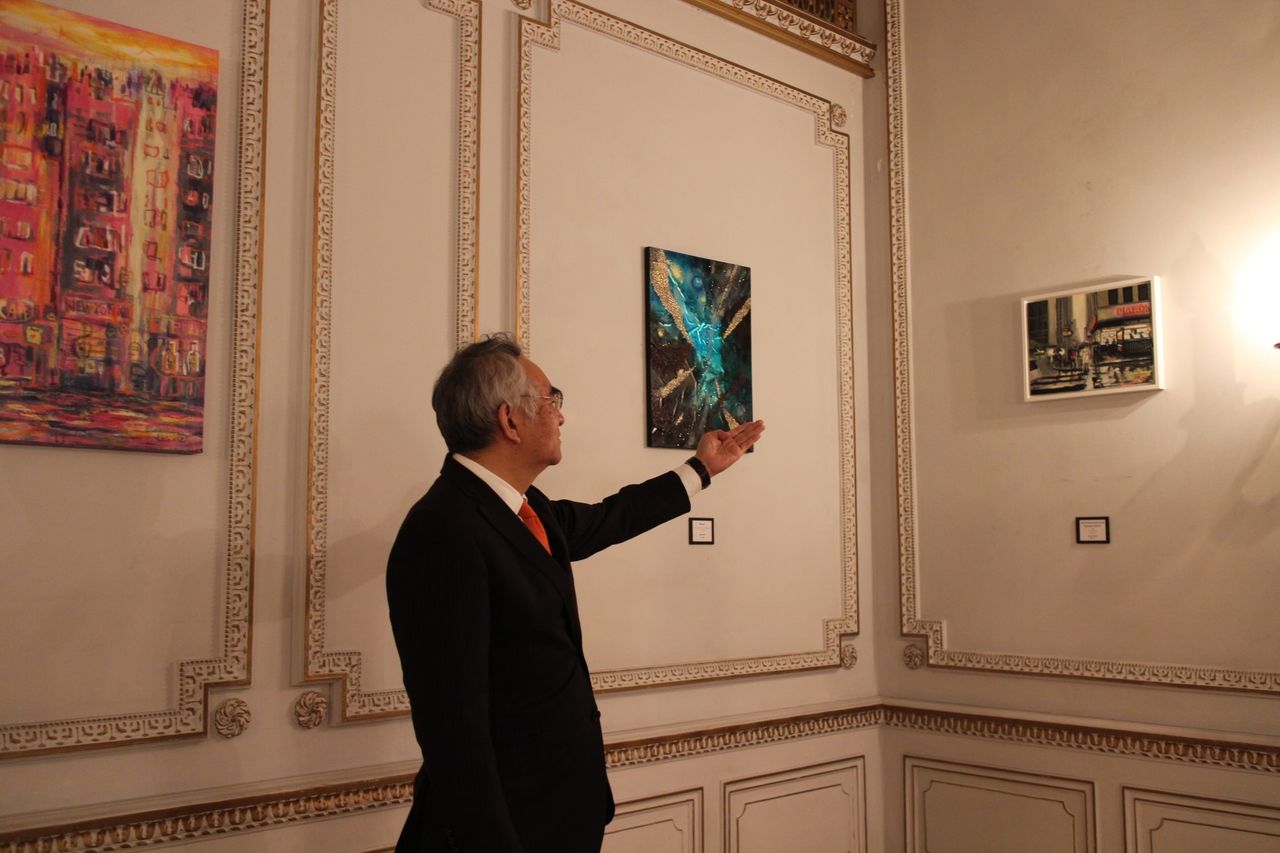 The pandemic has forced people to curb in-person interactions, making it all the more important to find alternative ways to stay in touch. Since the first statewide lockdown in New York in March 2020, the consulate has been keeping Japanese residents informed of the latest developments by delivering summaries of the governor’s and mayor’s press conferences via email newsletters and social media and updating its website. Having access to information in their native language has helped the residents feel more at ease.

Compared to his days working at government offices in Tokyo, Yamanouchi says it is in his current post that he feels a closer proximity to the citizens he serves. “There are some 100,000 Japanese living within the consular jurisdiction,” he explains. “The consulate exists as their last pillar of support. We have to always be on our toes.”

The need for diligence extends to the diplomatic front as well. 2020 saw a number of transitions including in national leadership for both Japan and the United States. On the topic of transitions, Yamanouchi describes the shift in Japan’s status on the world stage in the past 30 years: “In 1990, the Japanese economy accounted for 15 percent of global GDP. Today, it’s down to 5 percent.” He adds that Japan has gone from boasting 34 of the 50 most valuable firms—seven of which were among the top 10—to just one, Toyota Motor. “Aggregate market value isn’t the only indication of economic strength, but it is clear that our nation has headed into an era of challenge on the economic front.”

He further notes the decline of the G7 powers from a combined economic clout of 70% to less than 50% of the global total, signaling a shift in the world order itself. Even so, he stresses, Japan is the world’s third largest economy and continues to play a leading role in areas like development assistance, public health, and free trade, including pushing forward the Trans-Pacific Partnership.

Still, drawing attention to Japan’s various contributions and accomplishments is not as easy as it once was. Yamanouchi notes that media coverage of Japan in the United States has now taken a back seat to news about China and North Korea. The stories that do make headlines often have a negative tone, such as former Nissan head Carlos Ghosn’s escape from Japan to Lebanon and the plight of passengers aboard the coronavirus-stricken cruise ship Diamond Princess.

“Japan got plenty of coverage in the United States back when there was trade friction between the two countries,” he comments. “Tensions were very high then. It’s like an airport, in a sense—for the most part, planes take off and land just minutes apart without incident, and it’s a marvelous example of human ingenuity, but this isn’t news. If an accident happens, though, it’s front-page news. It may just be the nature of journalism to spotlight bad things. What this means though, is that appearing on the front pages isn’t quite the same as being respected.”

Among his various diplomatic duties, he sees bolstering the favorable opinion of Japan in the United States as one of the most crucial. “US national security experts have emphasized the strategic importance of US-Japan ties in countering the increasingly unstable international political environment,” he explains. “Japan is being seen as the most trusted ally.”

Yamanouchi feels that pro-Japanese sentiment in the United States benefits not only from bilateral cooperation in the arenas of politics, security, and business, but also through soft-power influences such as Japanese pop culture, literature, and traditional cuisine. The New York Times, for example, recently included works by Japanese authors Kawakami Mieko, Murata Sayaka, Onda Riku, and Yū Miri in its featured list “100 Notable Books of 2020.” Accomplishments in the fields of science and technology like the Hayabusa2 probe’s success in bringing back samples from a distant asteroid, as well as the steady stream of Japanese Nobel laureates, also help to shine a positive light on Japan. “The way Japanese culture has been embraced in the United States and elsewhere, proves to me the importance of the work that we do.”

The ambassador asserts that strengthening its ties with the United States is the key to Japan’s foreign policy, as the United States is Japan’s most important diplomatic partner and ally. A major challenge right now is working together to realize the Free and Open Indo-Pacific. “Maintaining strong US-Japan relations at every level including politics and security, economy, culture, and grass-roots exchanges is essential to Japan’s continued peace and prosperity,” Yamanouchi declares. “There is still a lot to do. We will continue to work hard in New York to promote this vital relationship.”

(Originally published in Japanese. Interview, text, and photos by Kasumi Abe. Banner photo: Ambassador and Consul General of Japan in New York Yamanouchi Kanji at his official residence in November 2020.)