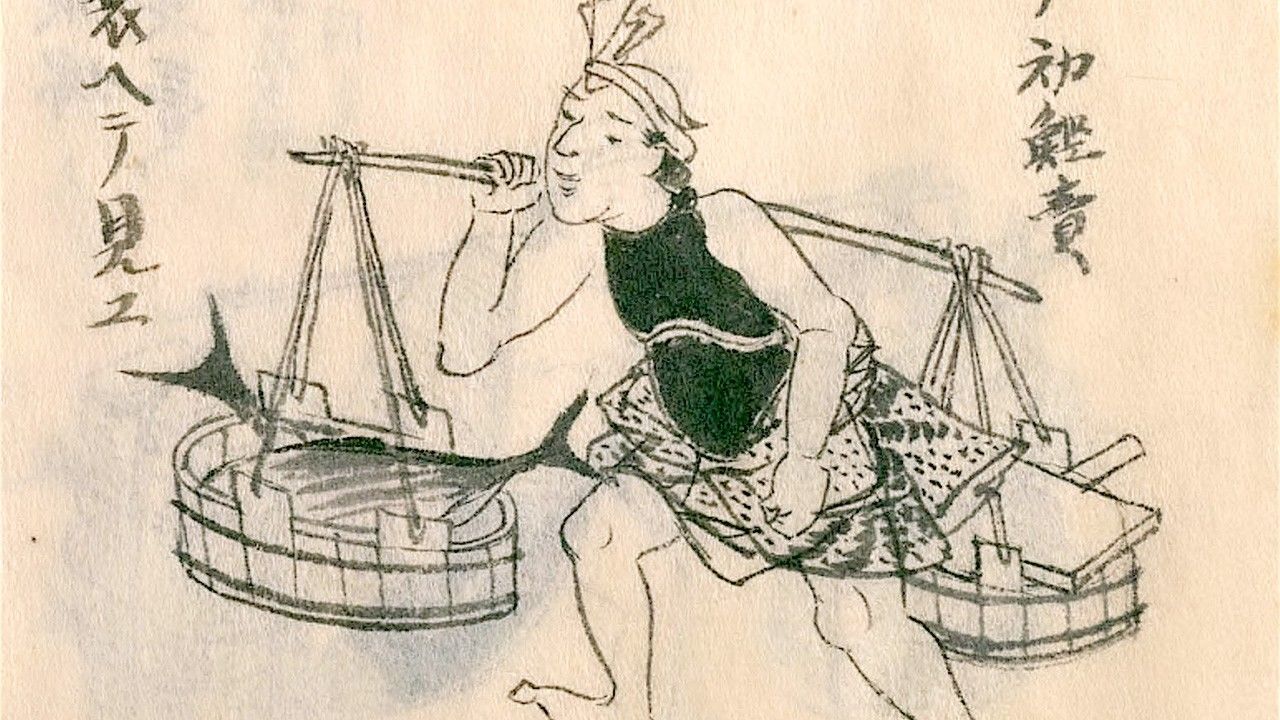 “Botefuri”: The Street Vendors of Edo

History Travel Food and Drink Mar 1, 2021
Street vendors were once a lively presence on the streets of Edo and other Japanese cities, and nineteenth-century chronicler Kitagawa Morisada made some 90 illustrations of these sellers and their various wares.

In the Edo period (1603–1868), in cities like Edo (now Tokyo) and Osaka, street vendors known as botefuri carried boxes on a yoke on their shoulders from which they sold everything from fish, vegetables, and other food to everyday items like dishes and brooms. Kitagawa Morisada, who chronicled Japanese city life in the nineteenth century in his Morisada mankō (Morisada’s Sketches), wrote extensively about these vendors, and frequently drew them.

The botefuri sold almost everything. As well as essential food and everyday items, there were vendors providing goods such as scrap paper, ash for braziers, and even insects like fireflies and crickets.

The shogunate’s initial policy was to provide licenses to older residents of 50 and older, children up to 15, and those with disabilities. As regular fires in Edo killed large numbers of people, leaving orphans and others unable to provide for themselves, the licenses were in one sense a form of support for the socially vulnerable. 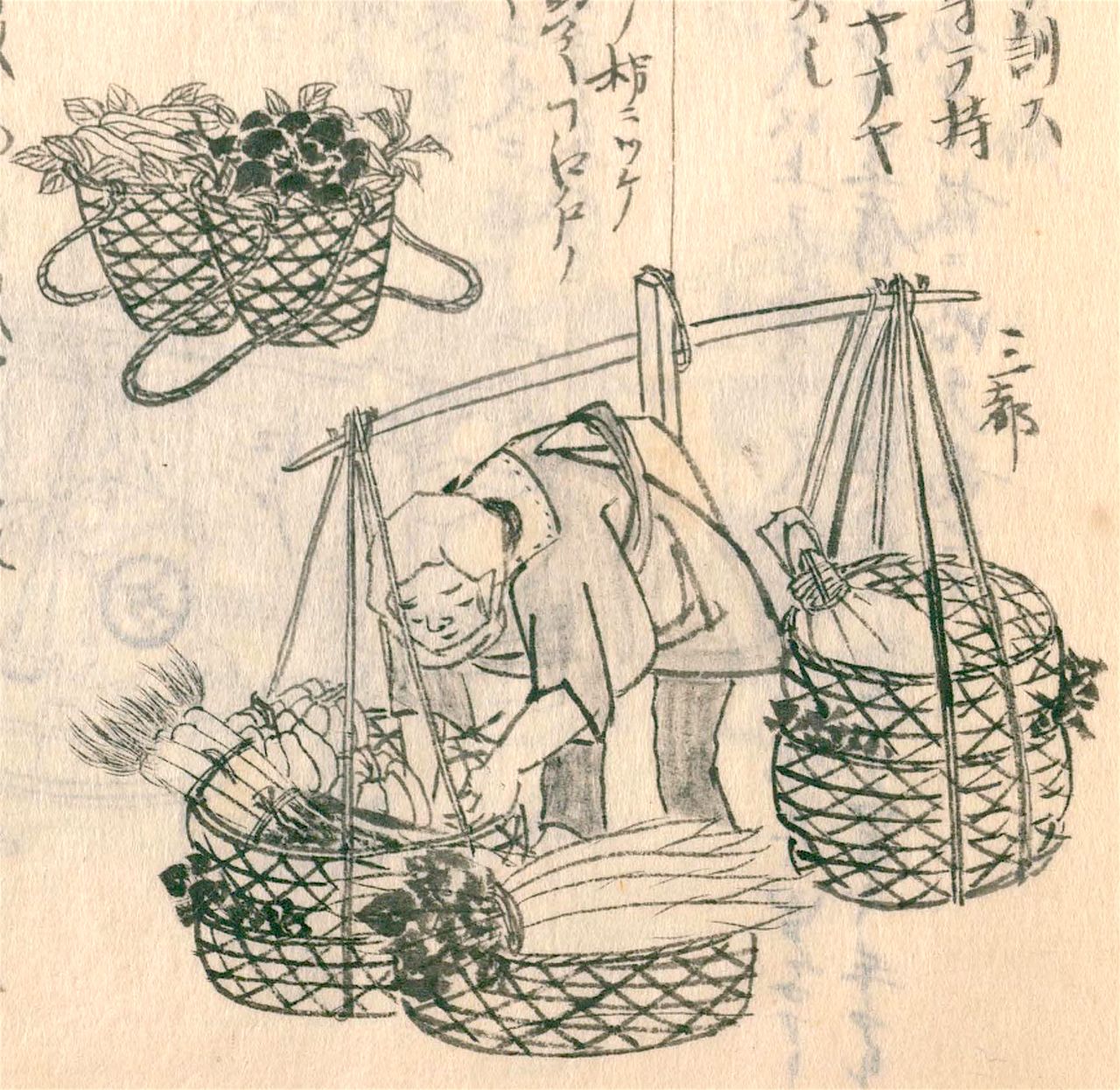 A botefuri selling daikon radishes. The baskets of the vendor in the foreground are in the style of Kyoto and Osaka, which varies slightly in shape from those in Edo (seen in the background). From Morisada mankō (Morisada’s Sketches). (Courtesy the National Diet Library)

The policy was, however, increasingly ignored as people of all ages rushed to become vendors. Unlike carpenters and other skilled workers, no skill or knowledge was required. It was unnecessary to purchase land or acquire a guild membership or other right to do the job. As it was so easy to get started, many who would otherwise be unemployed signed up as botefuri.

First, they would go to a business owner, who would lend them the yoke and baskets, as well as money to buy goods—around 600–700 mon, which is equivalent to ¥7,200–¥8,400 today (taking 1 mon as about the same as ¥12). The new botefuri would also typically get a lecture with basic information like the location they would sell in and the market price for buying new stock, before going out to work the same day.

After the day’s work was over, the vendors paid back the loan to the business owner with interest of 2%–3%, keeping the money left over as their income. Sales of 1,200–1,300 mon resulted in around 580 mon (¥7,000) to take home. (These figures are based on vegetable sales recorded in Bunsei nenkan manroku [Records for the Bunsei Era], which covered the years 1818–30.)

Those who could save up enough to buy their own daily stock or who had a mercantile talent could set up their own businesses. On the other hand, some vendors would take the day off if, for example, it was raining or they simply did not feel like it. While botefuri with wives and children to support had to keep going from day to day, Edo was a city of many single men who did not need to work so hard to get by.

There are around 90 illustrations of botefuri in Morisada’s Sketches. Such street vendors could continue to be seen well into the twentieth century, although increasingly equipped with bicycles or small trucks. The picture at the top of this article shows a fishmonger, who often appeared as a stock character in historical dramas and novels under the archetypal name Isshin Tasuke. The depictions of vegetable sellers show the popularity of various gourds and eggplants at the time.

Another typical botefuri specialty was clams like asari, shijimi, and hamaguri. An exhibit reconstructing a clam seller’s home and sales equipment can be found at the Fukagawa Edo Museum in Tokyo. 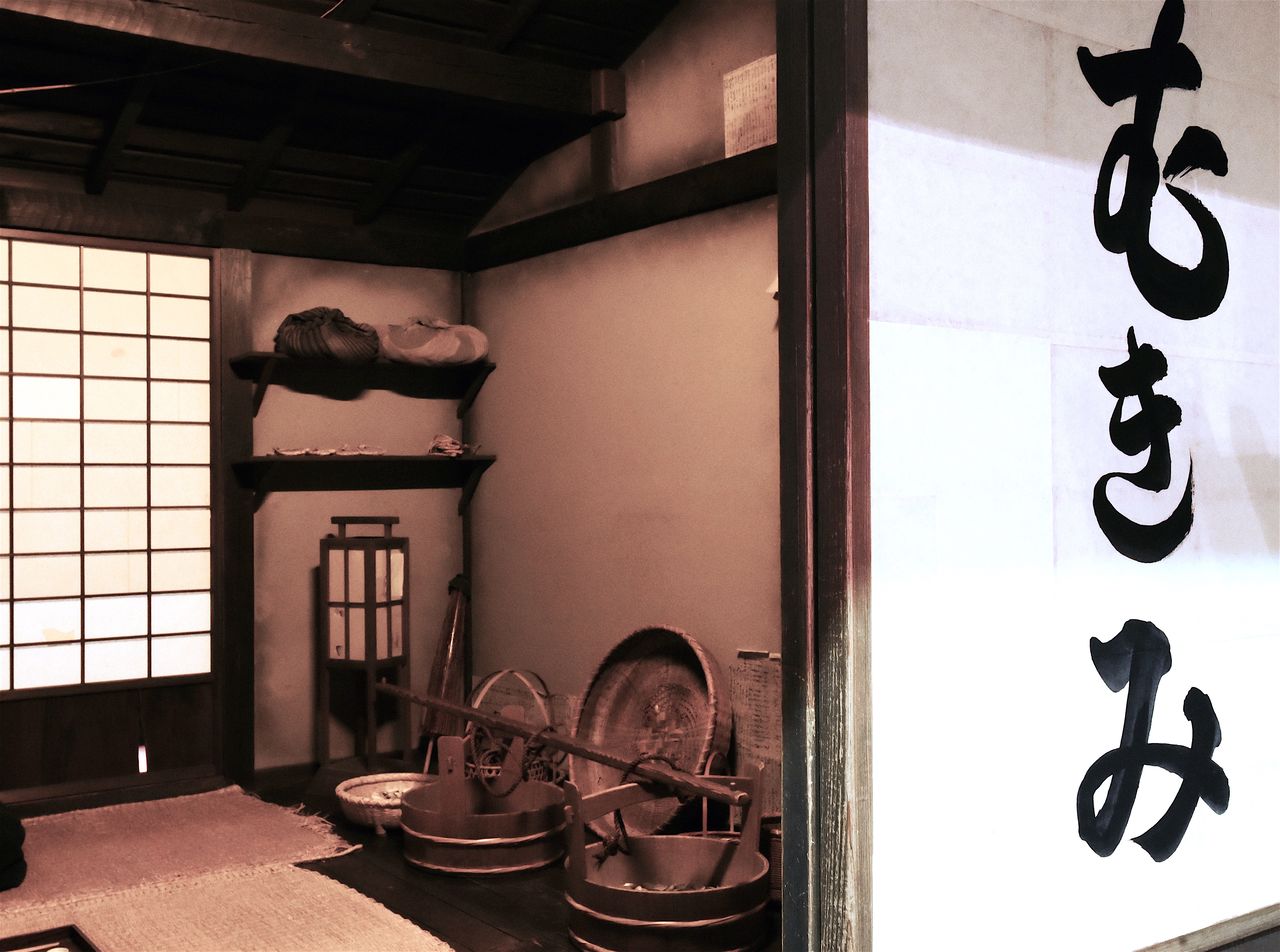 The clam seller’s yoke and baskets on display in a reconstructed room at the Fukagawa Edo Museum.

While it was most common to specialize in seafood or vegetables, there were many other possibilities, such as tōfu or tokoroten agar noodles. 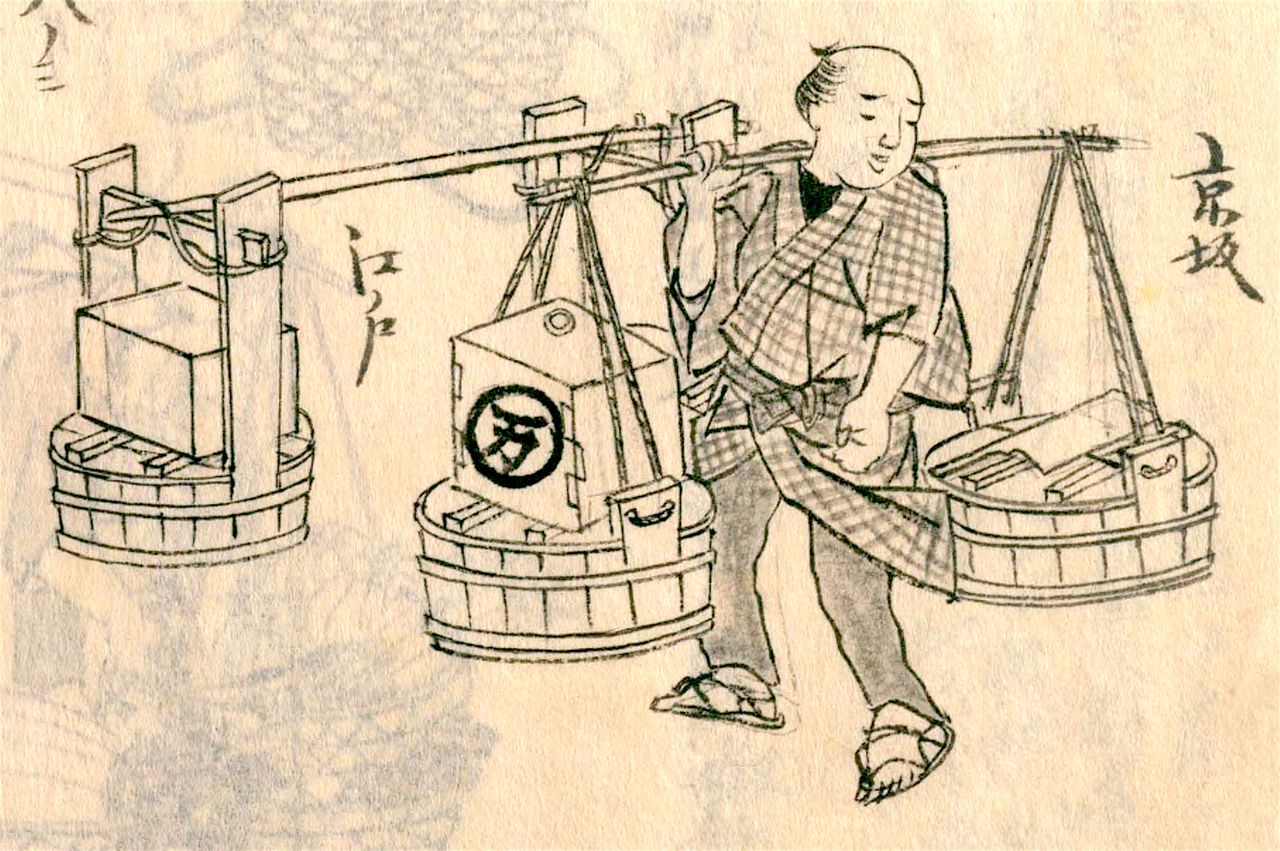 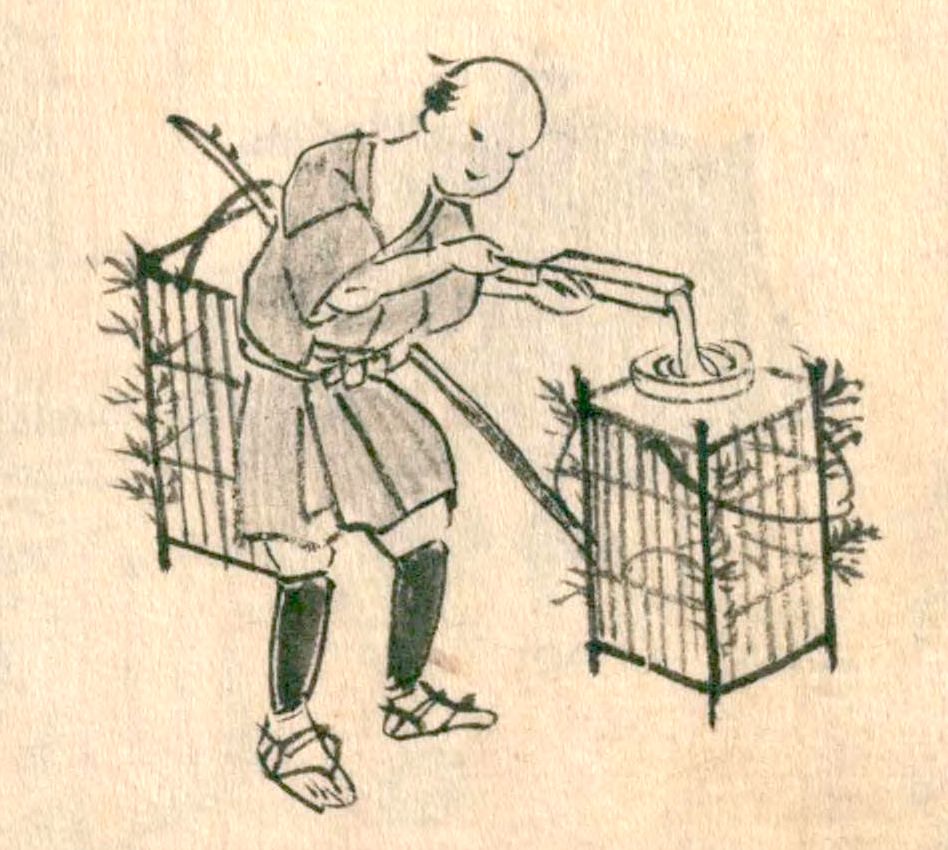 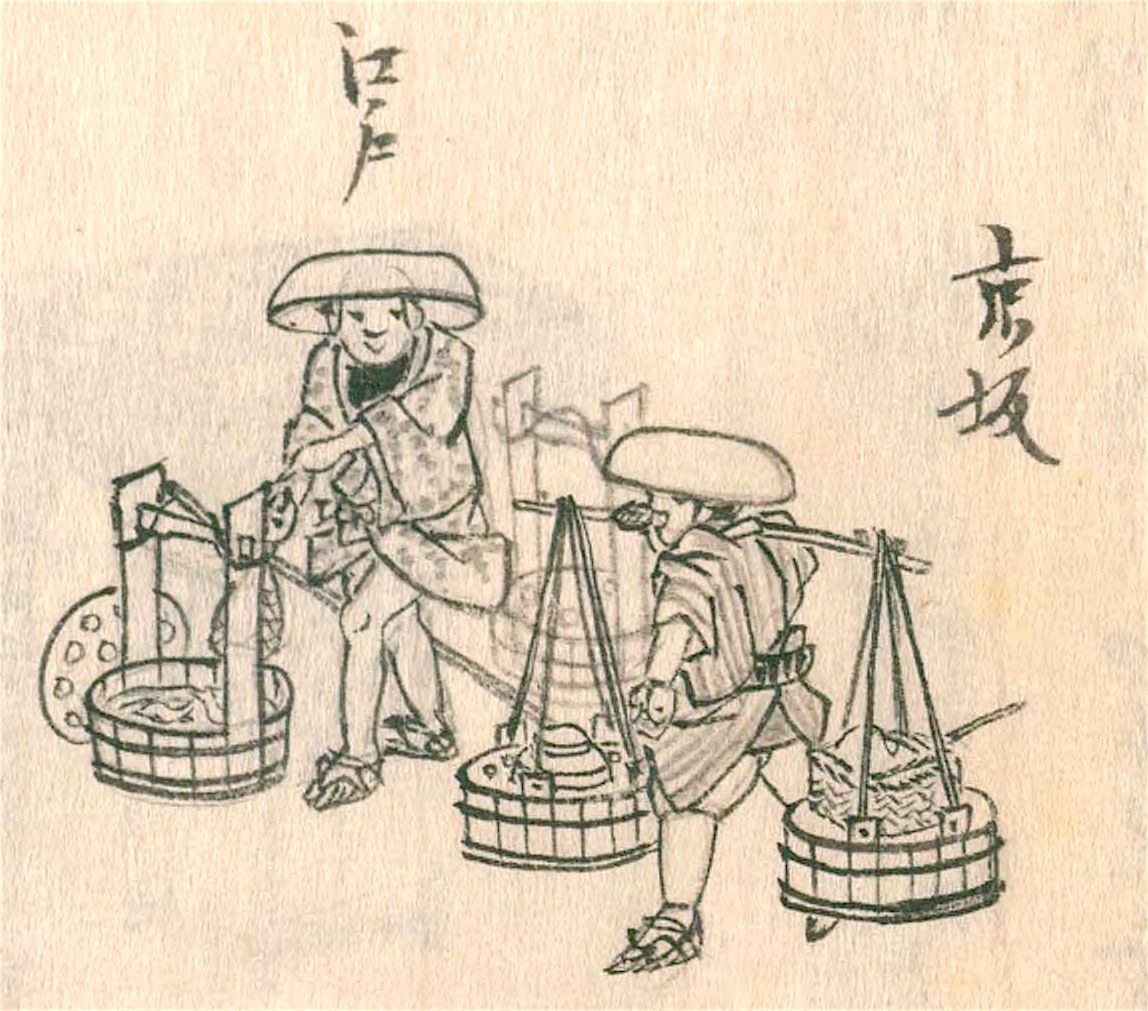 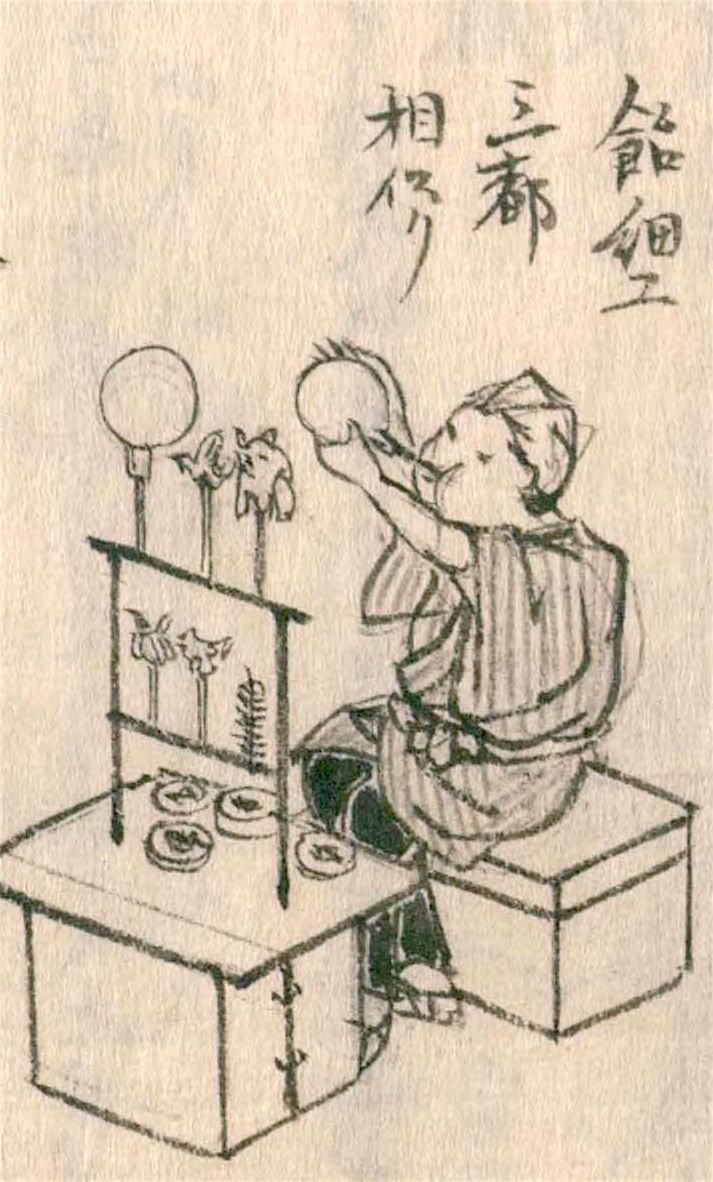 Some vendors changed their wares to match the seasons. While there are not likely to have been many botefuri with this level of entrepreneurial spirit, the advantage was that even without capital, it was possible to increase earnings through know-how and a friendly manner.

Created by the author based on multiple sources. 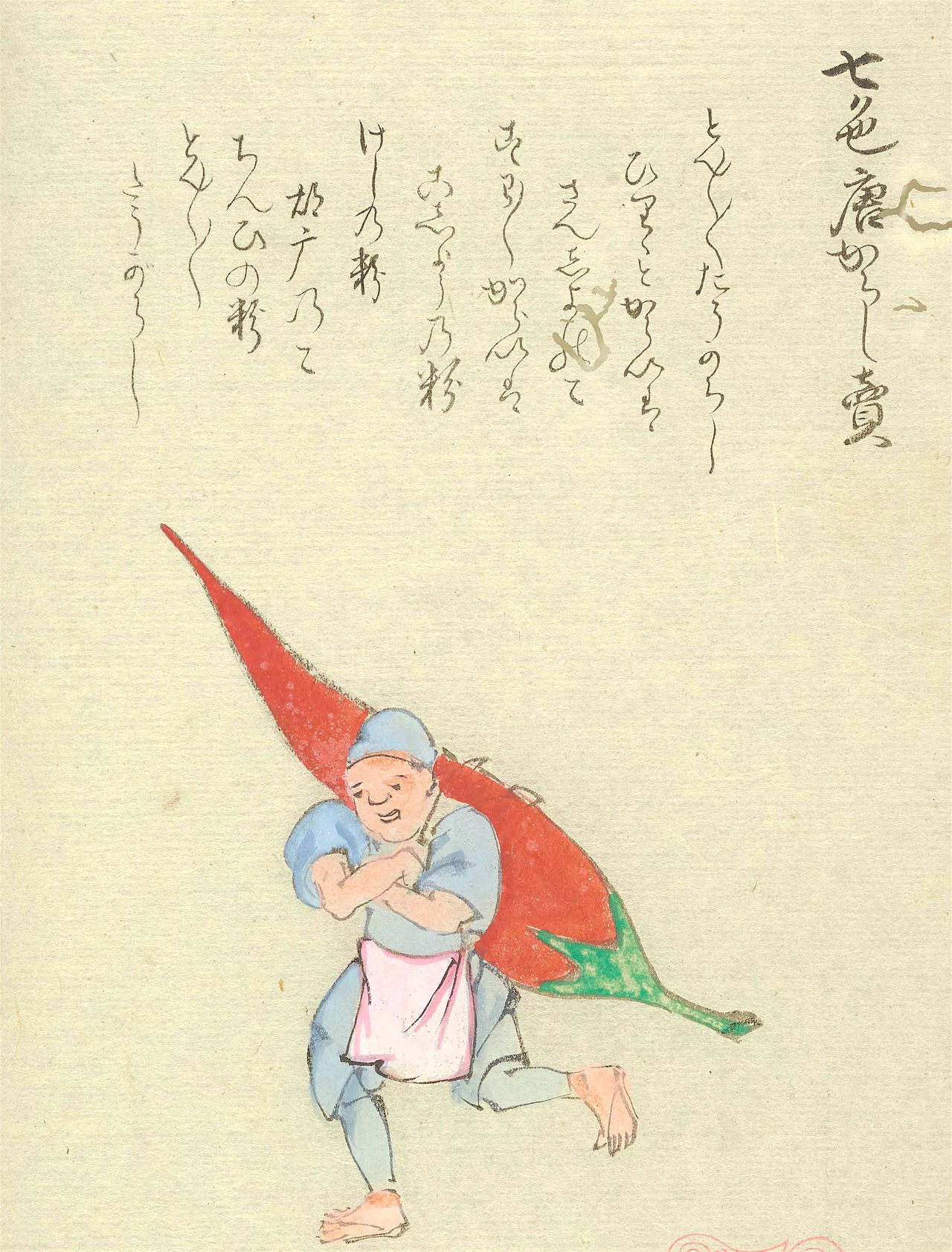 The chili pepper seller aimed to catch children’s attention, so that when they came their mothers would follow them and become potential customers. From Kinsei ryūkō akindo kyōka ezu (Illustrated Comic Poems on Popular Modern Merchants). (Courtesy the National Diet Library)

With a song extolling the virtues of the different ingredients, and their visual impact, chili pepper vendors were a famous sight in Edo, and an example of commercial ingenuity. They drew in customers similarly to how promotional yuru kyara mascots do today. Incidentally, writing about these sellers appears in Morisada’s Sketches, but there are no pictures of papier-mâché peppers.

There were also fraudulent merchants described in Morisada’s Sketches. Some apparently sold okara (tōfu lees) shaped to look like chicken. While this trade probably did not continue for long, it shows that alongside the steady workers, there were some deceitful vendors.