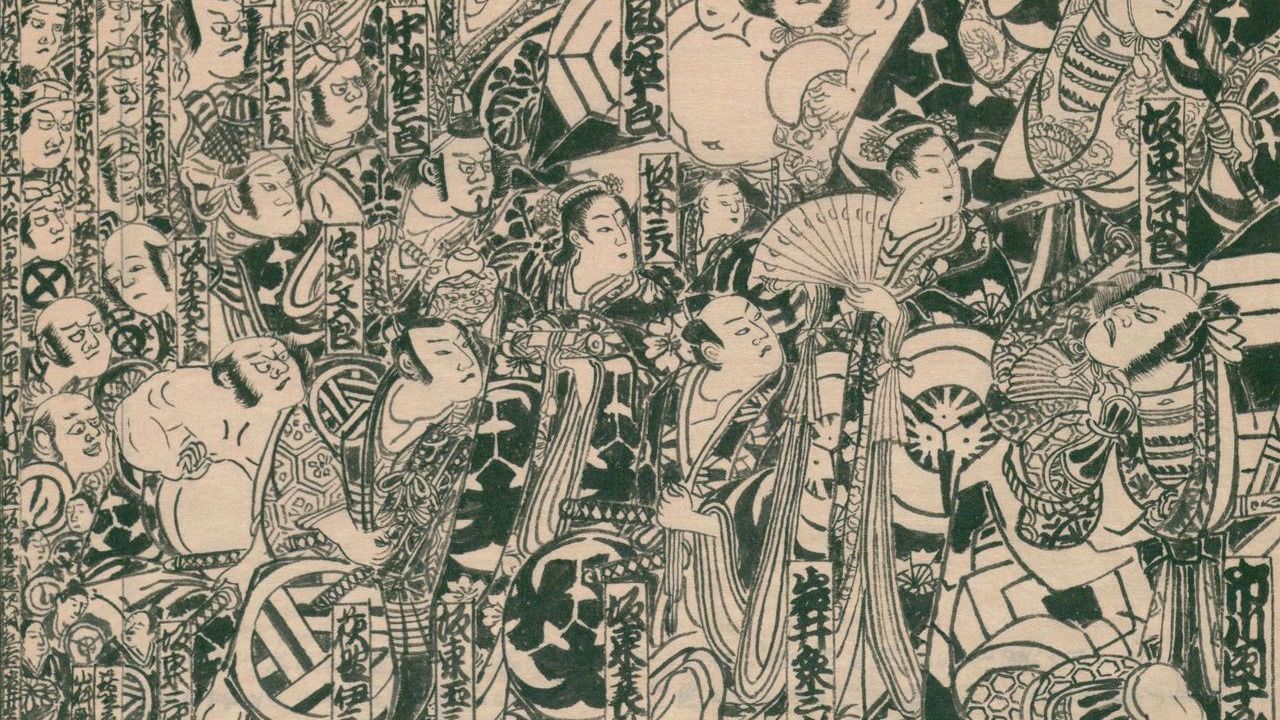 History Culture Oct 26, 2020
Japan’s long-running rivalry between the west of the country, including the old capital of Kyoto, and the new capital of Edo (now Tokyo) in the east has fostered regional cultural differences. Kitagawa Morisada recorded many of these in an encyclopedic work that took him nearly three decades in the mid-1800s to write.

Today, it is easy to jump on a Shinkansen and ride from Tokyo to Osaka in two and a half hours, and people can learn about local customs all around the country by simply checking online. However, speed of movement brings with it a homogenizing effect. Two centuries ago, when it took more effort to trek from city to city, there was more regional variation. In his voluminous Morisada mankō (Morisada’s Sketches), published for nearly three decades through the 1860s, the writer Kitagawa Morisada documented many differences between the east and west of Japan in the late Edo period (1603–1868).

The illustrations and descriptions Morisada left, based on his decades of observations, provide vivid pictures of the everyday lives of ordinary people. He compares everything from kimono fashions and building styles to fire lookout towers, popular plays, and the pleasure quarters. Of hairstyles, he notes that women in Edo (now Tokyo) preferred the Hyōgo-musubi on newly washed hair. In this style, the hair is gathered at the back, formed into a loop on top of the head, and held in place with kanzashi ornaments. Meanwhile Kansai girls typically had two topknots fastened with kōgai hairpins, with the remaining hair combed upward in a style known as ryōwa-wage. 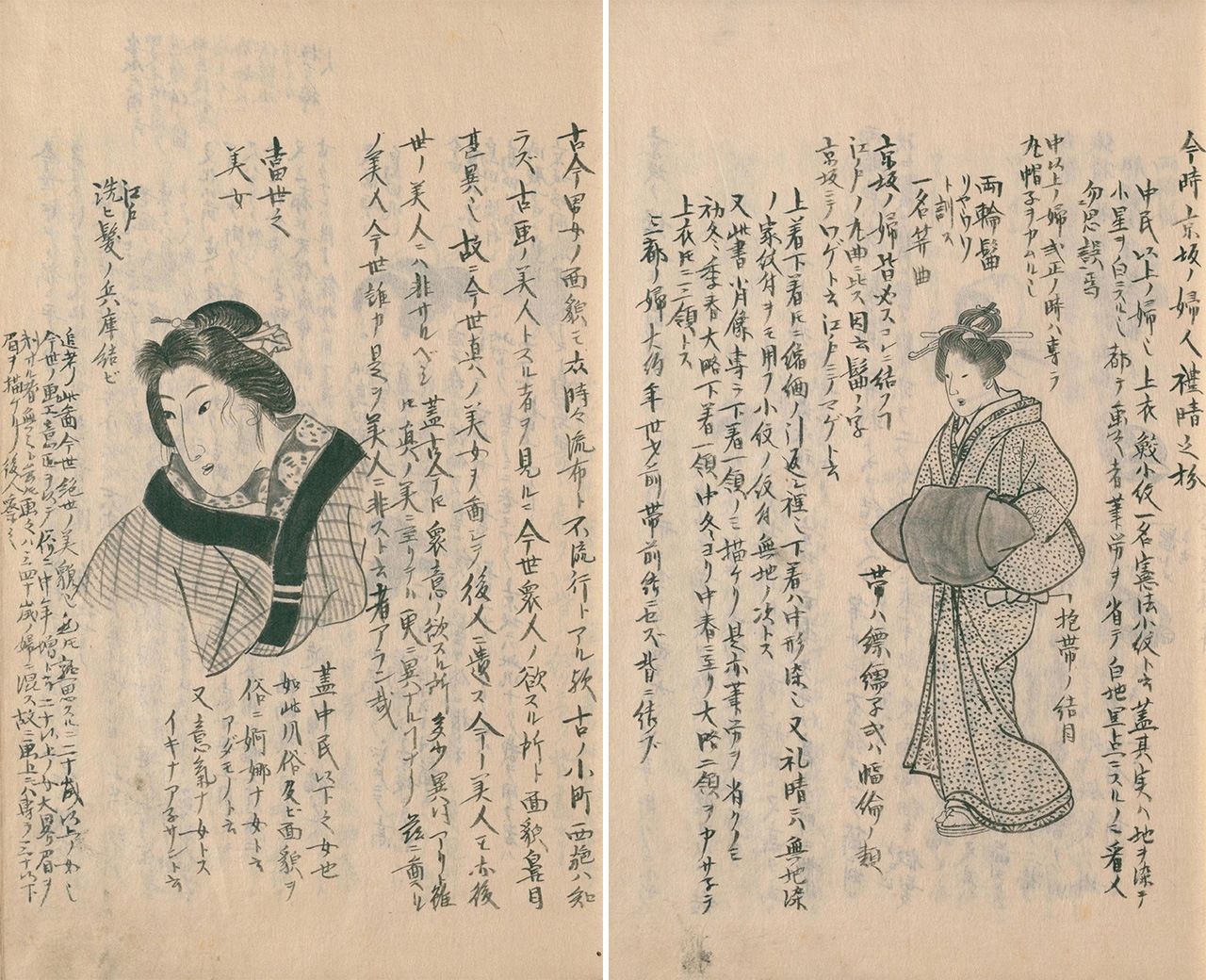 Comparisons of hairstyles and accessories of a woman from Edo (left) and Kyoto.

Discovered in a Used Bookstore

Morisada’s Sketches begins with the author’s self-introduction. He writes that in 1840, he left Osaka for Edo at the age of 31. While living in Fukagawa (now in Kōtō, Tokyo), he tired of spending all his time reading the Chinese Shijing (Classic of Poetry) and became determined to write his own book, recording the customs of the time for future generations.

This kind of encyclopedia of miscellaneous information was then known as a ruisho. Morisada completed 30 main and 5 supplementary volumes, adding to his collection up through 1867. His colossal work went unmarked, however, by the shogunate, intellectuals, and the general public of the time. It was not until 1901 that the author’s own manuscript was discovered in a used bookstore in Asakusa and sold to the Imperial Library (now the National Diet Library). The price was ¥80, equivalent to around ¥1.6 million in today’s money. The second and seventh volumes were missing, as they remain to this day.

Kōda Shigetomo, a historian and brother of the novelist Kōda Rohan, found Morisada’s Sketches in the Imperial Library, and praised it as a rare and valuable book. This helped prompt a reprinting by Kokugakuin University in 1908. Subsequent printings since have cemented the work’s reputation as an important resource on the customs of early modern Japan.

Morisada was a merchant. Although little is known about his life, he states in the book that his original surname was Ishihara, but he was adopted into the Kitagawa merchant family, succeeding as the head of household.

In the first supplementary volume, he writes that the Kitagawa family dealt in sugar. The family was probably prosperous, as in the mid-nineteenth century, sugar—like soy sauce and katsuobushi (dried bonito shavings)—was an important element in many dishes. In particular, it was an essential Edo flavor when blended with soy sauce.

The historian Tanno Akira writes of Morisada, “First of all, he was a merchant with a steady character. Although not brilliantly talented, he was a businessman brimming with curiosity, who found joy and purpose in pursuing his interests. Second, by leaving blank spaces on the pages of Morisada’s Sketches, so he could add further information as he learned it, he showed the attributes of a rational researcher.”

This questing spirit of curiosity calls to mind the journalist and intellectual giant Tachibana Takashi (1940–), while as an endlessly curious businessman with a sense of adventure, he makes one think of Honda founder Honda Sōichirō (1906–91). He was also a skilled artist. For example, he drew the pictures of the women’s hairstyles above. While both were ordinary women of no particular rank, Morisada took the trouble to provide careful explanations of the differences in their styles, including their clothing.

The comparisons between Edo and Kamigata—the region including Kyoto and Osaka—were based on Morisada’s observations. While he writes of being born in Osaka and going to Edo at 31, he is thought to have later been based in the western city, his base for occasional business trips to the capital. As such, he was naturally accustomed to Kamigata customs, while Edo and its culture were initially unexplored territory.

From the time Tokugawa Ieyasu established the shogunate in Edo in 1603, the new capital developed at an astonishing pace. Previously, however, Kyoto had been Japan’s political center and Osaka its economic hub. There was a common belief in Kamigata that Edo was nothing more than an eastern backwater, and the friction between the two regions continued throughout the 260 years of the Edo period.

Measurements are a case in point. The ken, a unit of length, was around 1.74 meters in Edo and 1.91 meters in Kamigata. Local pride is thought to have stood in the way of standardization. The ma, used as a basis for the size of tatami mats, also differed, with the Kamigata version being known as kyōma (“Kyoto” or “capital” ma), while that for Edo was called the inakama (“country” ma). The people of Kamigata persisted in viewing Edo as the back of beyond, which was a factor in the latter developing its own culture. The sketches below by Morisada show clear differences in the appearance of streets in Kyoto and Edo. 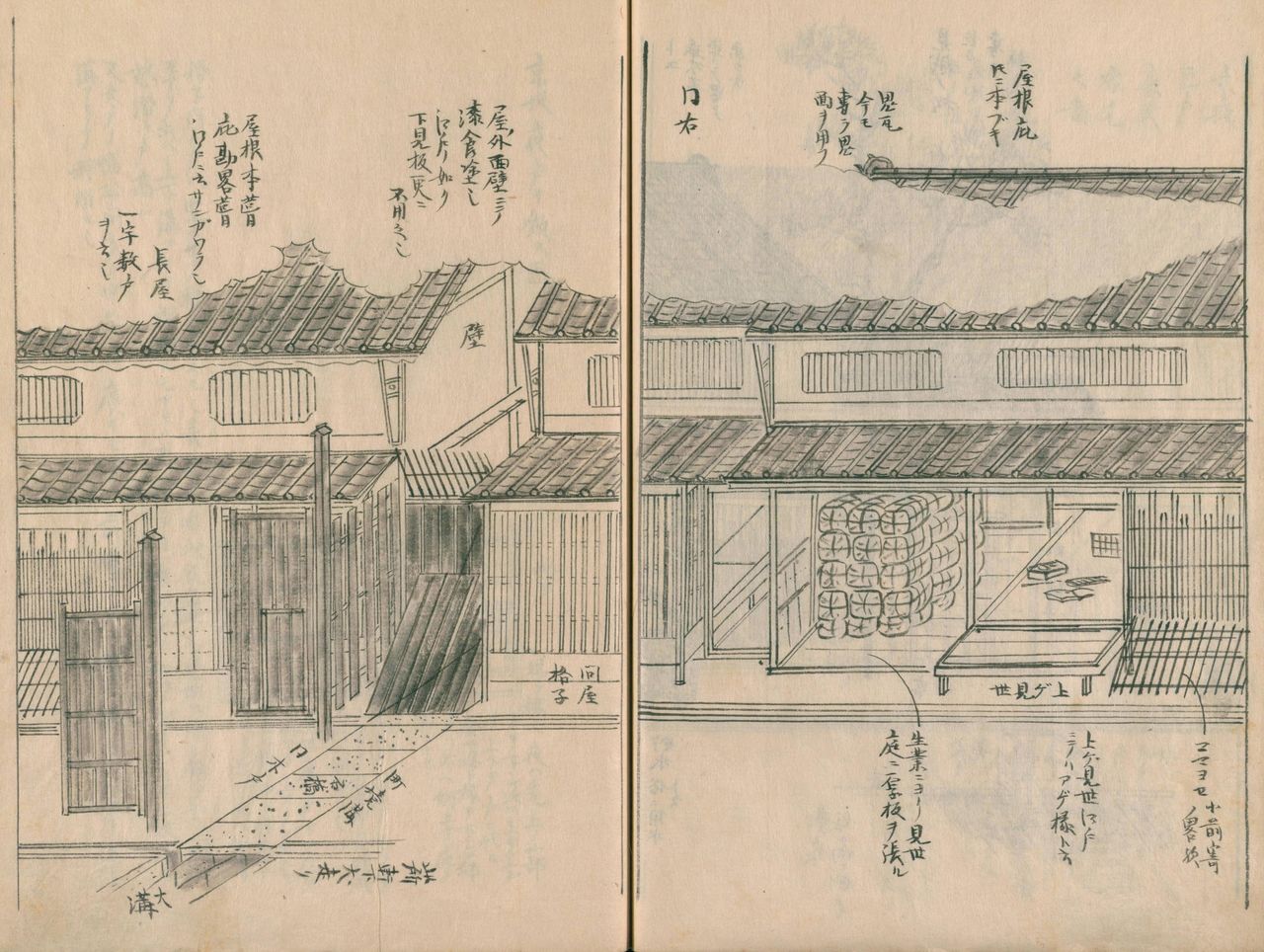 To the right of the sacks of rice piled up in a Kyoto store is a display table known as an agemise in front of the building, a feature of the city’s stores since the Muromachi period (1333–1568). It can be raised to close the front of the shop. The gate to the left leads through to traditional nagaya “long houses.” 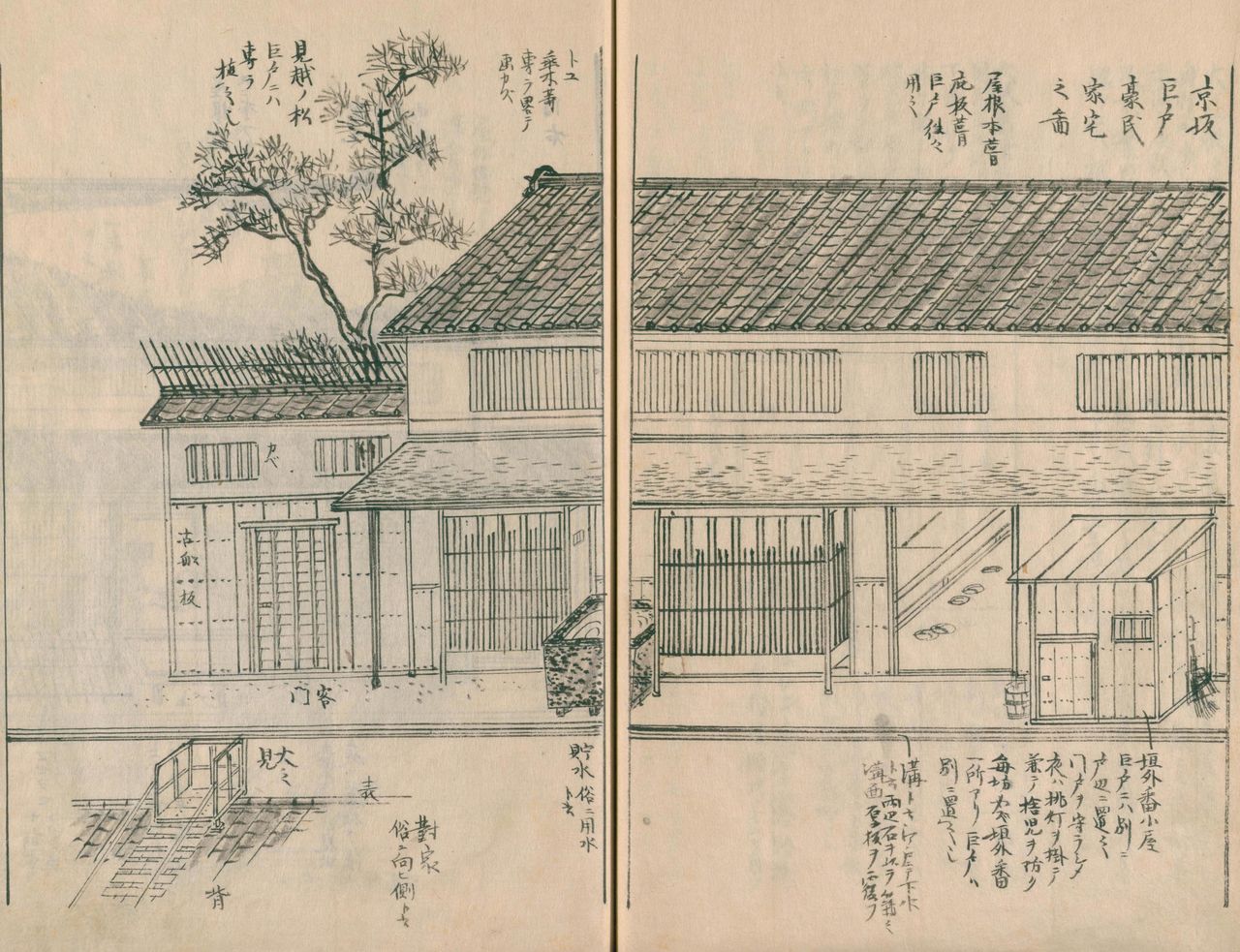 This Kyoto scene has a guardhouse at the right. To its left is the entrance to the machiya or townhouses. It is narrow, but deep, like the townhouses themselves, which were nicknamed unagi no nedoko (sleeping places for eels). 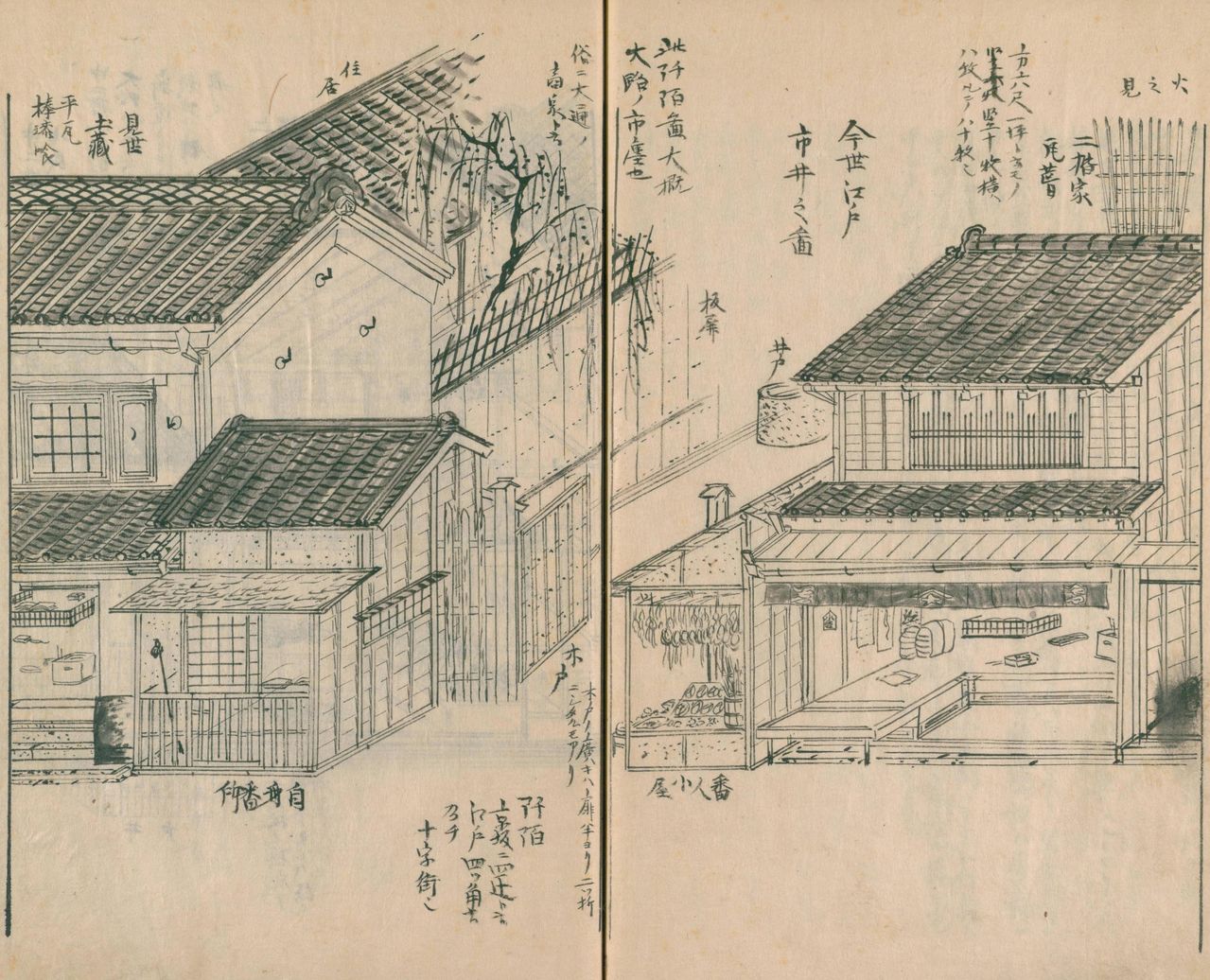 The store at the right facing the street in this picture of Edo is called an omotedana, which was usually run by the landowner. The central gate leads to nagaya in which people would rent living space from the landlord.

It is easy to imagine that Morisada felt culture shock at the differences when he came to Edo. The two regions were quite distinct when it came to dialect, customs, lifestyles, clothes, food, and pastimes. However, Morisada did not see one as being superior to the other. All he wanted was to record them as faithfully as possible for posterity.

Of the women whose hairstyles he drew, Morisada commented that future generations develop their own distinct ideas of beauty. He emphasized that fashions and values are not universal, and that culture is always changing. Rather than arguing, he believed that it was important to know and acknowledge each other.

“There was a popular writer of scripts for kabuki and kyōgen called Nishizawa Ippō, who was born in Osaka and was eight years older than Morisada,” Tanno notes. Ippō spent a year in Edo around the same time as Morisada and wrote a book published in 1850 called Kōto gosui (A Nap in the Imperial Capital) comparing Kyoto, Osaka, and Edo. “Morisada met Ippō in Edo and was probably influenced by his plan to write a book. However, Morisada started writing 10 years earlier than Ippō, and unlike the text-only reportage of A Nap in the Imperial Capital, his Morisada’s Sketches was encyclopedic, with simple, accurate pictures supplementing the words.”

Morisada stopped writing in 1867, probably due to the increasing pace of change since the arrival of US ships in 1853 demanding that the country open up for trade. He noted his concerns about a war between the shogunate and the United States.

“One senses Morisada’s love for the everyday lives of ordinary people in his writings and pictures of fish and vegetable vendors, and sushi and soba,” Tanno comments. “But perhaps he gradually concluded that he would not able to continue in the more than a decade of continuous uproar that followed the arrival of the ‘black ships.’”

In the Meiji era (1868–1912), the Edo-period customs and culture Morisada loved were soon engulfed in waves of Westernization. Even for someone as open to variety as him, the encroachment of foreign cultures may have been hard to accept. There is no further record of his activities.

(Originally published in Japanese on August 11, 2020. All illustrations courtesy the National Diet Library.)