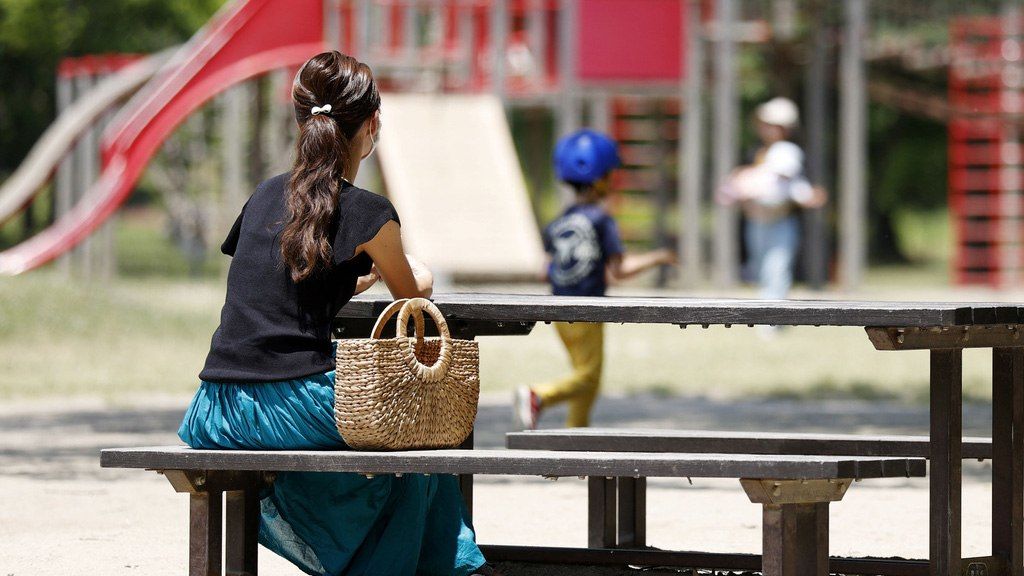 Society Economy Family Work Health Feb 12, 2021
The pandemic has heavily impacted the livelihoods of single-parent families, particularly single mothers employed in casual or part-time positions with low job security. Corporate Japan is turning to restructuring, wage cuts, and other measures to deal with the COVID-induced economic downturn, raising the question of how working mothers are coping during the second state of emergency.

It was New Year’s Eve 2020 when Maeda Tomomi (a pseudonym), a part-time employee at a Tokyo hair salon, resigned after months of pressure from her employer. She received her final wages mid-January, with no severance pay. Maeda is now frantically searching for jobs at the local Hello Work public employment office. Adding to her concerns is the stress of looking after the wellbeing of her two children, who are in junior high and high school.

She traces the cause of her resignation back to April 2020, when customer numbers fell drastically with the spread of COVID-19. At the time, Maeda urged her manager to improve the sanitary conditions at the salon, including supplying masks and disinfectant and installing an air purifier. However, her employer merely scoffed at her ideas. “My suggestions seemed reasonable to protect the customers and staff,” she says. “But I was accused of nit-picking.”

Maeda also raised questions about the system for recording employee attendance, further irritating management. In September, she was summoned to the manager’s office, where in a roundabout manner her boss told her that poor business conditions meant her job could be at risk. Pushing for clarity, she asked directly if management wanted her to resign, but only received a vague response. 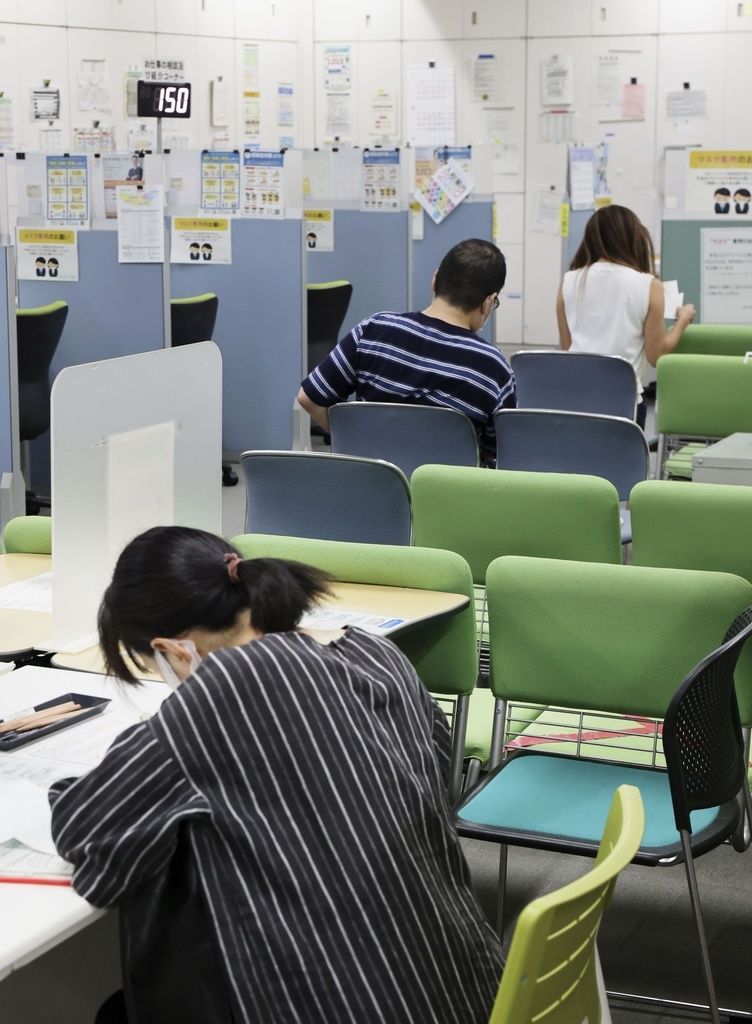 Bowing to pressure, Maeda tendered her resignation, but made certain to say it was at the company’s discretion. However, her employer refused to accept the document and she had no choice but to say she was quitting of her own initiative, which would affect when she could collect unemployment. She heard that nonregular workers at other branches were pressured to quit in the same manner, highlighting the insecurity of such positions.

Maeda worked part-time, but she is an expert in eyelash care, boasting years of experience. Confident in her skills, she applied to some 20 salons, but was unable to land a position. Her age—she is in her forties—proved to be a stumbling block. Desperate for work, she now regularly visits the Hello Work office in hopes of finding a job in any line of business.

Maeda resigning of her own will means that she now has to wait more than three months to claim unemployment benefits, whereas she would have been eligible for payments after a week had the company admitted to letting her go. She had been earning less than ¥100,000 a month, which even combined with the ¥50,000 a month she received from the government’s child-rearing allowance program was barely enough to make ends meet. Now, unless she finds work soon she will have no income until early April.

Her elderly parents are unable to provide financial support, leaving her with nowhere to turn for help. With each passing day, she is growing increasingly anxious and desperate.

According to a Ministry of Health, Labor, and Welfare survey, as of early January, more than 80,000 workers have resigned or been laid off due to the pandemic. 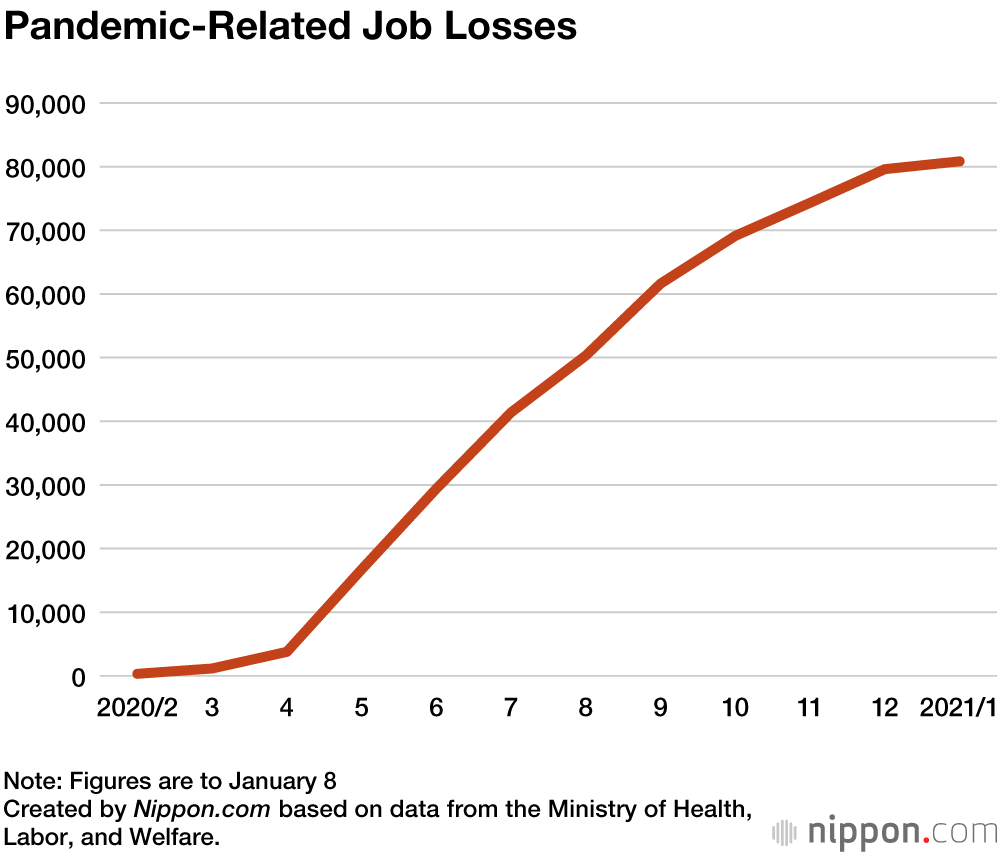 Moyai, an NPO that supports people in need, reports that since last spring they have received double the usual number of requests for assistance. During the New Year, they set up a stall at the Tokyo Metropolitan Government Building in Shinjuku and distributed meals to over 200 needy people. The organization says it is seeing an uptick in appeals for help from groups who have not typically relied on their services, including youths and single mothers who suddenly lost their jobs. One thing that many people have in common is that they were nonregular workers.

Moyai chairman Ōnishi Ren claims that employers use casual employment as a control valve. “Some companies are resisting the pressure to let employees go,” he explains. “But as business conditions continue to deteriorate, they are prioritizing the retention of full-time employees at the expense of nonregular staff.”

Even where employees are not dismissed, many see their hours and income reduced. The NPO Single Mother’s Forum surveyed the impact of the pandemic on economically vulnerable populations and found that 59% of single mothers had their income fall. For many who were already struggling to get by, the economic impact of COVID-19 has pushed them deeper into poverty. 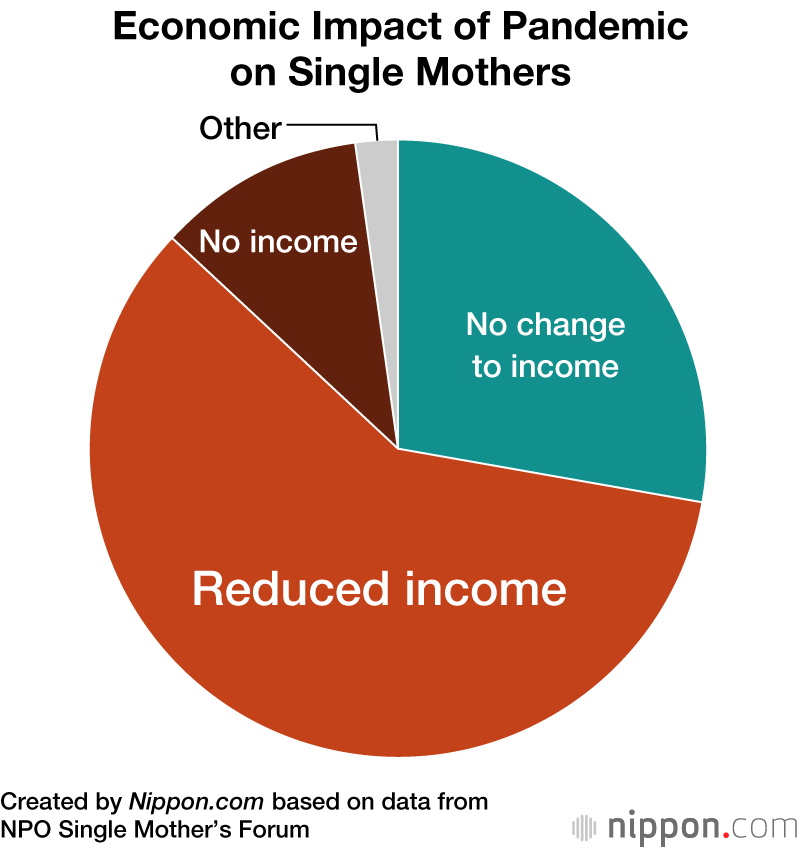 Nishida Rin (a pseudonym), a former contract employee at a sporting goods importer, had her pay suddenly reduced in February 2020, and received no income in March or April. Most of her company’s products came from Italy and China, but the pandemic cut shipments from both countries. Customers canceled their orders and the company struggled with a worsening cash-flow problem. Realizing she would exhaust her savings if she stayed, Nishida resigned in May and started looking for other employment.

Capitalizing on her English ability, honed in the United States while at university, she found work as a freelance translator. Changing jobs came at a cost, though. She no longer enjoys the security she did as a company employee. At the import firm she earned up to ¥170,000 a month after tax, but freelance work is unstable and now her income can range from ¥40,000 to ¥100,000 a month.

Nishida puts some money aside in good months to draw on when times are tight, although she insists it is not enough to sustain her if her economic situation were to take a serious turn for the worse. She reduces her expenses by accepting food from an NPO, but says that child-rearing costs and the need to care for her parents has stretched her budget to the limit.

The impact of the pandemic is also being felt in education. An elementary school in the same district as Nishida’s son’s school has seen discipline problems disrupt classrooms with growing frequency. The district was already considered rough, but recently even elementary schools are seeing rising violence among students. One cause is that the need to restrict social interactions to prevent the spread of COVID-19 has made it difficult for children to play outside, increasing their stress. Schools have struggled to deal with incidents. The last straw for Nishida came when her son was injured by another child, prompting her to stop sending him to school.

The pandemic has also pushed a worrying number of single mothers working from home to the brink. Tokyo resident Yahagi Madoka (a pseudonym) worked in the logistics and warehousing industry. In spring, though, she became ill and a few months later was diagnosed with cancer. She had been working extreme amounts of overtime since March and she wonders if this was a factor in her illness, or simply the toll of years of overwork.

Yahagi took time off starting in July. She underwent surgery in August and stayed in the hospital until October. During that time, a friend cared for her young daughter, who was unable to visit her due to the hospital’s COVID-19 measures. She vacated her apartment at the end of 2020 and is living in a rent-free shelter for women with children. Although she is still too weak to return to work, she says she is trying to stay positive. “I can’t give up now, not while I have my child to care for.”

Japan’s COVID-19 death toll has topped 6,000, as the country grapples with the third wave of the pandemic. On January 7, the government, facing a rapid rise in cases, declared a second state of emergency. This initially only applied to Tokyo and surrounding prefectures, but authorities extended it to include the Kansai region and other major metropolitan areas around the country. 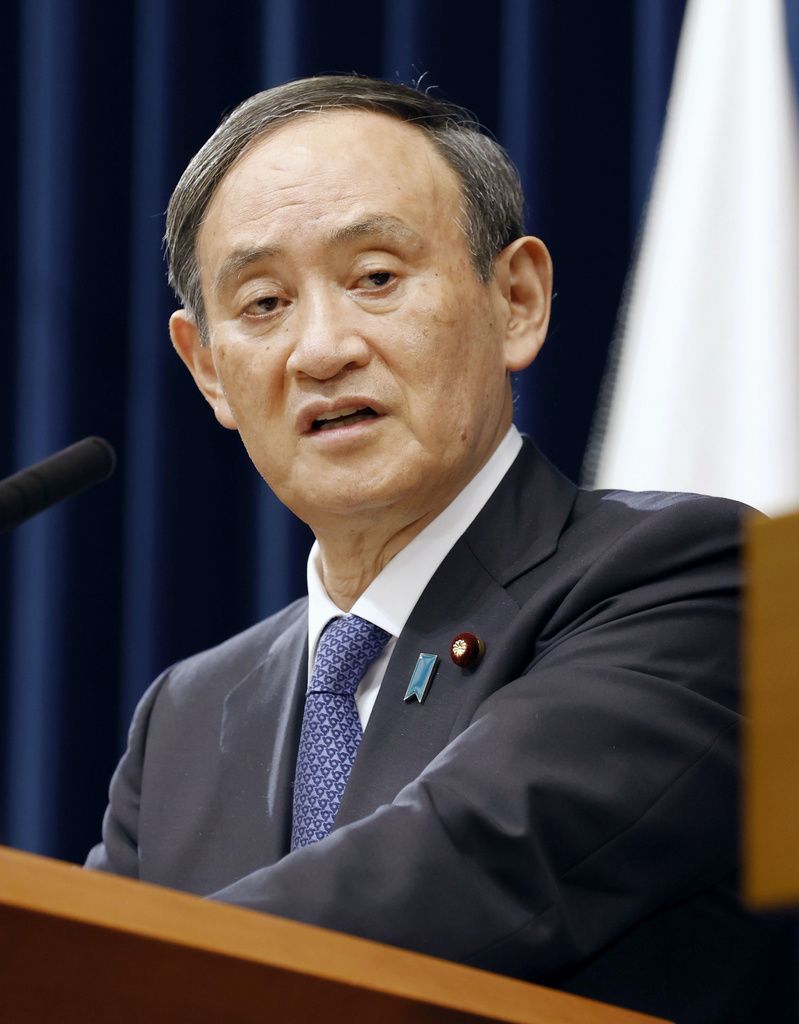 Kobayashi Keiichirō, research director at the Tokyo Foundation for Policy Research and a member of the government’s Subcommittee on Novel Coronavirus Disease Control, believes it is important to set aside economic concerns and focus on reducing the spread of infections. Kobayashi is critical of the government’s delay in acting. In mid-November, the subcommittee discerned that Japan had reached Stage 3 (rapid increase of infections), sparking debate about halting the government subsidized “Go To” travel campaign. However, leaders did not take decisive action until six weeks later.

Kobayashi believes that the late response came at a high cost and that it is imperative that the government implement strong measures to curb infections, roll out large-scale economic assistance to reduce economic side-effects, and provide the public a clear message.

The latter has been particularly challenged for authorities. As part of the state of emergency, the government asked bars and restaurants to shut by 8:00 pm to prevent the spread of the virus, but this inadvertently increased lunchtime crowding. Kobayashi feels that the government’s messaging is flawed—by focusing on dinner, it implies that people can do as they wish during the daytime. Despite calls to implement remote working, commuter numbers have not fallen. With the medical system stretched to the limit, Kobayashi doubts that the state of emergency, which has already been extended one more month, will end anytime soon.

A third extension would raise serious concerns of the economic impact. Maeda, having abandoned the beauty industry, thought she could always find work waiting tables, but now she worries that job-hunting will become even harder.

The government’s employment adjustment subsidy, which supplements absence allowances provided by companies, generally does not benefit nonregular workers. The government ratified additional support of ¥50,000 for single parents at the end of 2020, but Kobayashi believes authorities should offer direct cash payments for a certain period, focused on low-income households. He expects, depending on economic conditions, that a supplementary budget will be needed in the new fiscal year that starts in April.

Moyai chairman Ōnishi feels people can persevere if they know what is ahead. But many find the current uncertainty overwhelming, and a growing number of companies are unsure of how to proceed with employees. He believes that waiting for economic recovery is not an option. The public is already suffering and needs financial support now. “People are almost at the breaking point.”

(Originally published in Japanese on January 21, 2021. Banner photo: A single mother at a park in Sendai, Miyagi Prefecture. © Kyodo)