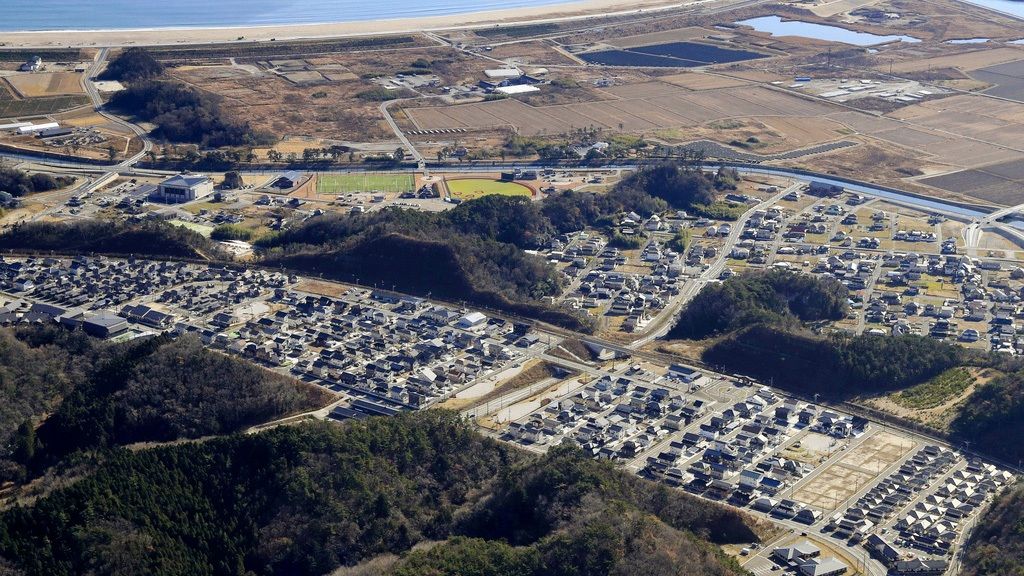 Ten Years After 3/11: A Top Reconstruction Official on Japan’s Progress and Future Tasks

Society Politics Mar 10, 2021
On March 11 this year, Japan marks the tenth anniversary of the 2011 earthquake and tsunami that devastated the Tōhoku region’s Pacific coast. How are recovery efforts faring there, and what does the national government see as issues to tackle going forward? An interview with the Reconstruction Agency’s top bureaucrat. 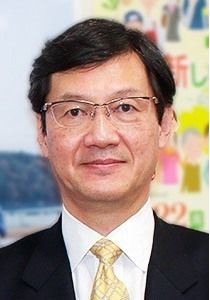 Administrative vice-minister for reconstruction. Born in 1960 in Shimane Prefecture. Joined the Ministry of Construction (today’s Ministry of Land, Infrastructure, Transport, and Tourism) after graduating from the University of Tokyo. There he held posts including director-general of the Housing Bureau and director-general of the Policy Bureau; he also served as deputy mayor of Kyoto. In his present post since July 2020.

INTERVIEWER  We’re coming up on ten years since the March 11, 2011, disaster. What is the recovery situation in the affected areas of Tōhoku?

YUKI FUMIHIKO  Japan has made steady progress in reconstruction. Depending on the area in question, though, there are key differences in the sort of disaster that they faced. Districts primarily affected by the earthquake and tsunami, particularly on the coastlines in Iwate and Miyagi Prefectures, have basically reached the final stage of reconstruction work. In parts of Fukushima Prefecture that were impacted by the meltdowns and radiation leaks at Fukushima Daiichi Nuclear Power Station, though, we’ve only just entered the stage of full-fledged rebuilding.

The infrastructure work in Iwate and Miyagi is complete. Now the key task is to achieve the “mental and emotional reconstruction” of the residents who lived through the disaster. How can we ensure the health of children and senior citizens there, give them educational opportunities, give them meaningful opportunities in their lives? How can we rebuild communities that have been shattered? These will remain major issues to grapple with for some time still to come. The fisheries and seafood processing industries, mainstays of the region, have yet to reestablish the sales channels they enjoyed before the disaster, and we’ll need to continue offering support to the people of Tōhoku.

In Fukushima, meanwhile, there are still areas with evacuation orders in effect. Residents are unable to return to their homes in some 330 square kilometers of the prefecture’s northeast—an area about half the size of Lake Biwa, Japan’s largest. Even in areas where the evacuations have finally been called off, we see some where few are willing to return, or where returnees are overwhelmingly elderly. We need to continue working to create better living environments there. In districts not yet designated as ready for residents to return, we are selecting certain areas for focused efforts to decontaminate the soil and rebuild living infrastructure, toward the goal of opening some areas up to returnees as early as the spring of 2022. These efforts will continue. 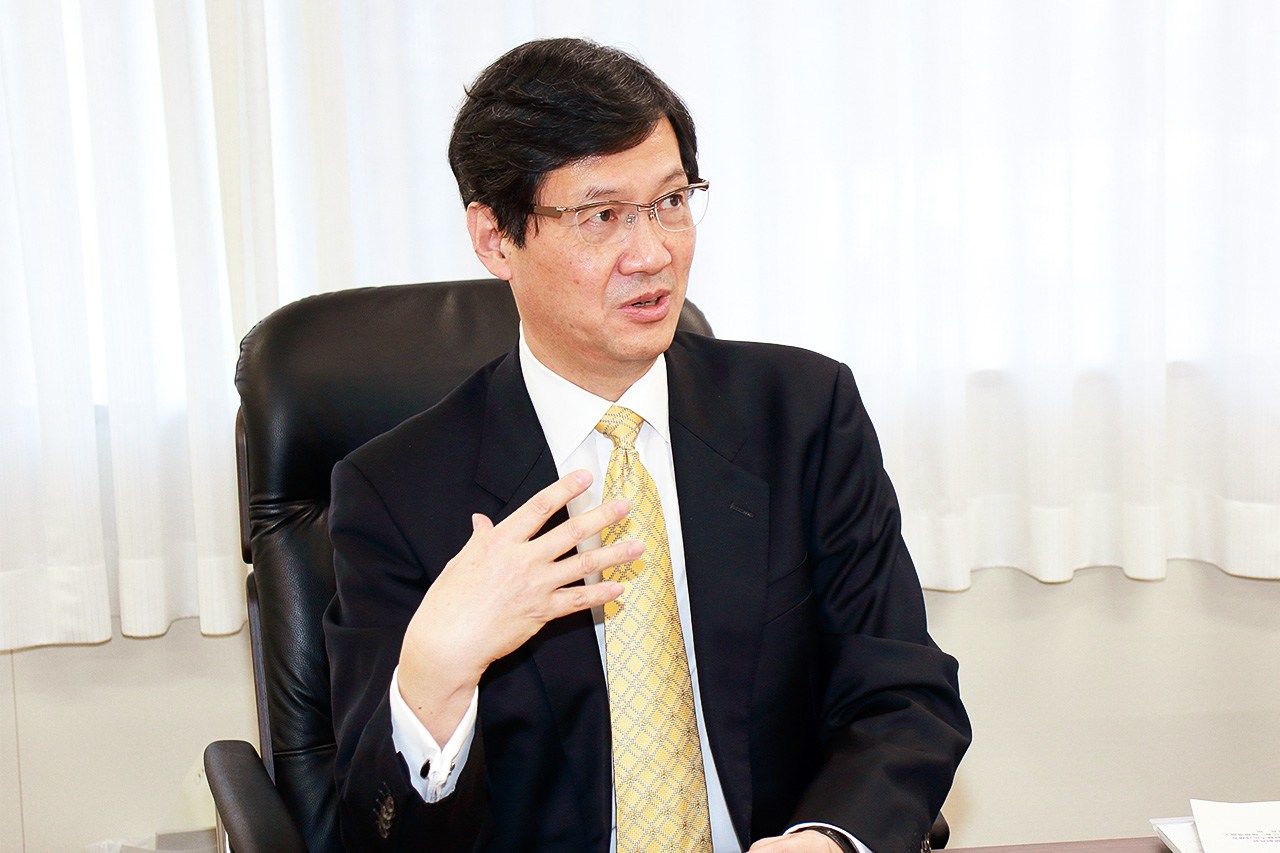 INTERVIEWER  How much has the reconstruction work cost to date? What can you tell us about the plans from here on out?

YUKI  As part of what has been called the Reconstruction Framework, Japan has budgeted 31.3 trillion yen over the last ten years for rebuilding the areas impacted by the earthquake, tsunami, and nuclear disaster. Special reconstruction bonds were issued to raise these funds over the short term, and the costs are slated to be covered over twenty-five years through income tax hikes and other measures. This is the first such approach taken in Japan. Public infrastructure work in the tsunami-hit areas is basically complete, and over the next five years we’re scheduled to reduce the scale of the Reconstruction Framework considerably, to some 1.6 trillion yen in further spending.

In the area of infrastructure, this spring should see the completion of a coastal road traversing the entire Sanriku region, north to south, as well as “reconstruction roads” connecting coastal areas to the interior. Railways have all been rebuilt and are in operation today. And by the end of March, we will finish construction of 30,000 units of public housing throughout the disaster area, as well as the formation of elevated land to site 18,000 homes moved from low-lying areas near the shore.

This has been a great success in terms of setting a blueprint for reconstruction and executing what needed to be done according to that plan. I believe we’ve set a precedent that we’ll be able to put to use again if a similar disaster takes place one day somewhere else around the world.

INTERVIEWER  What does the government view as the remaining challenges in the impacted areas?

YUKI  When talking about reconstruction of the areas hit hard by the earthquake and tsunami, we haven’t just returned the residents to the same places where they once lived. We’ve created new elevated neighborhoods for them to live in and left the low-lying land reached by the tsunami for use as industrial districts, for public facilities, or for agriculture.

The work of moving earth to create these platforms and shaping them into residential districts is done, but no use has been determined for around 30 percent of the land elevated so far. We’ve also seen cases where people who had intended to move to the raised land called off their plans for family or other reasons. This has left us to deal with the issue of how to make use of these areas. Of course, we can’t create all-new residential communities in the space of a year or two, but this sort of community creation is precisely what we’re going to have to work on in time to come.

Looking back at what’s been done in the Fukushima area impacted by the nuclear accident, we can see some progress. At first there was a vast area of 1,150 square kilometers where people had been ordered to evacuate. Over the last decade this has been reduced to about a third of that total. Now, though, the task is to create environments making it possible for people to actually come back to live there. There will also be support mechanisms not just for former residents looking to go home, but for people who will move to these areas for the first time.

People need places to work if they are to come back. The government is aiming to attract cutting-edge technology firms to set up shop in the area. The Fukushima Innovation Coast Framework is our name for this initiative, which already involves the construction of industrial facilities to create drones and robots for practical use and to bring hydrogen energy to the application stage. Needless to say, the region also needs us to do more work to address the reputational damage its agricultural and fisheries products have suffered due to the Fukushima Daiichi situation.

INTERVIEWER  The Tōhoku region as a whole attracted a great deal of attention and financial and other support, especially in the immediate aftermath of the 2011 disaster. Do you see it as the government’s role to give back to the world, in the form of sharing the lessons and wisdom Japan has gained from the postdisaster recovery process?

YUKI  Ten years ago, after the earthquake struck we received pledges of support from 163 countries and regions, along with 43 international organizations. They dispatched medical and other specialist teams to the afflicted zones and donated money and needed supplies, all of which helped to put our recovery efforts on a secure footing indeed. US President Joe Biden, while he was vice president under Barack Obama, visited Miyagi Prefecture, and we’ve seen countless other political figures, athletes, artists, and many more visitors come to the region and lend courage to the residents. We cannot express enough gratitude for all the global community has done for Japan.

We’re currently grappling with the COVID-19 pandemic, but it is our hope that we can host the Tokyo Olympic and Paralympic Games this year, setting them as a stage to share with the world Japan’s recovery from the Great East Japan Earthquake. Games are scheduled in Fukushima for the baseball competition and in Miyagi for soccer.

It is, of course, also our duty to share what we have learned in the course of rebuilding from the disaster—our experiences, the know-how we’ve gained—with people around the world. In 2015 Sendai, Miyagi Prefecture, hosted the Third UN World Conference on Disaster Risk Reduction. Each two years since then, the World Bōsai Forum has taken place, and we have been inviting experts from around the globe to come to the impacted areas in Tōhoku to learn from Japan’s experiences there. 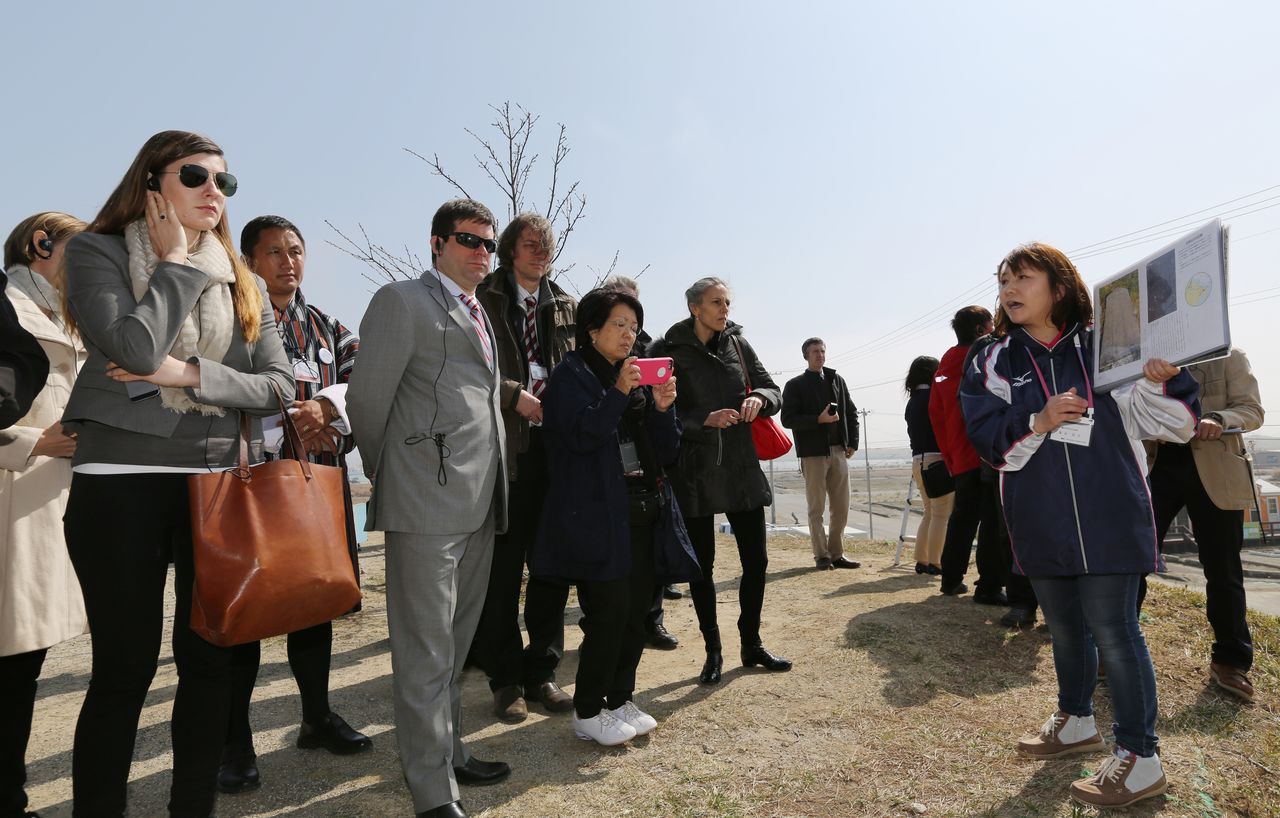 World Bōsai Forum participants visit the Yuriage district in Natori, Miyagi, on March 17, 2015, and listen to a local woman’s explanation of what the residents went through on and after March 11, 2011. (© Jiji)

The Japanese government sees three points as particularly important to share as lessons learned from the postdisaster experience. Firstly, disaster is not something to respond to after it takes place; it’s vital to take needed measures in advance. In terms of tsunami preparedness, this means building physical infrastructure like breakwaters, of course. But looking at the potential for waves like we saw in 2011, on a scale that only comes once every several centuries, it’s also clear that we need to think about how to plan our communities to be more resilient. This includes establishing routes for swift evacuation, sharing information ahead of time on where people need to flee when the time comes, and so forth.

Second, in the disaster response and mitigation field we often hear the phrase “build back better.” We need to create something that improves on what previously existed when we recover and rebuild following a disaster.

And third, we have to realize that disaster response isn’t something that the public sector can handle on its own. A diverse range of actors, including from the private sector, need to function together to get things done.

I might also add that if there’s a desire to hear about Japan’s experience in designing the Reconstruction Agency, or in putting together the funds needed to pay for its rebuilding efforts, we’re more than happy to share this information as well.

INTERVIEWER  Your agency has also put together a web portal with information on ten years of reconstruction efforts in Tōhoku. What can you tell us about this?

YUKI  The pandemic has made it difficult to plan real-world events to mark this milestone year in the regions impacted by the March 11 disaster. On the Internet, though, we’re able to share plenty of information on how reconstruction is going with people all around the world, as well as here in Japan. We’re organizing a photo contest, seeking submissions that shed light on the rebuilding progress made in Iwate, Miyagi, and Fukushima Prefectures, or on their charms. The site also features content introducing the Tōhoku region from various angles, links to resources from the Iwate Tsunami Memorial Museum, and includes an English-language section. We’re planning to host a virtual “online symposium” and upload the proceedings on the site; you can expect it to become more informative as we go forward.

(Originally written in Japanese based on a February 19, 2021, interview by Ishii Masahito of Nippon.com. Banner photo: A newly built residential area located above the tsunami danger zone in Higashi Matsushima, Miyagi Prefecture. © Kyōdō.)