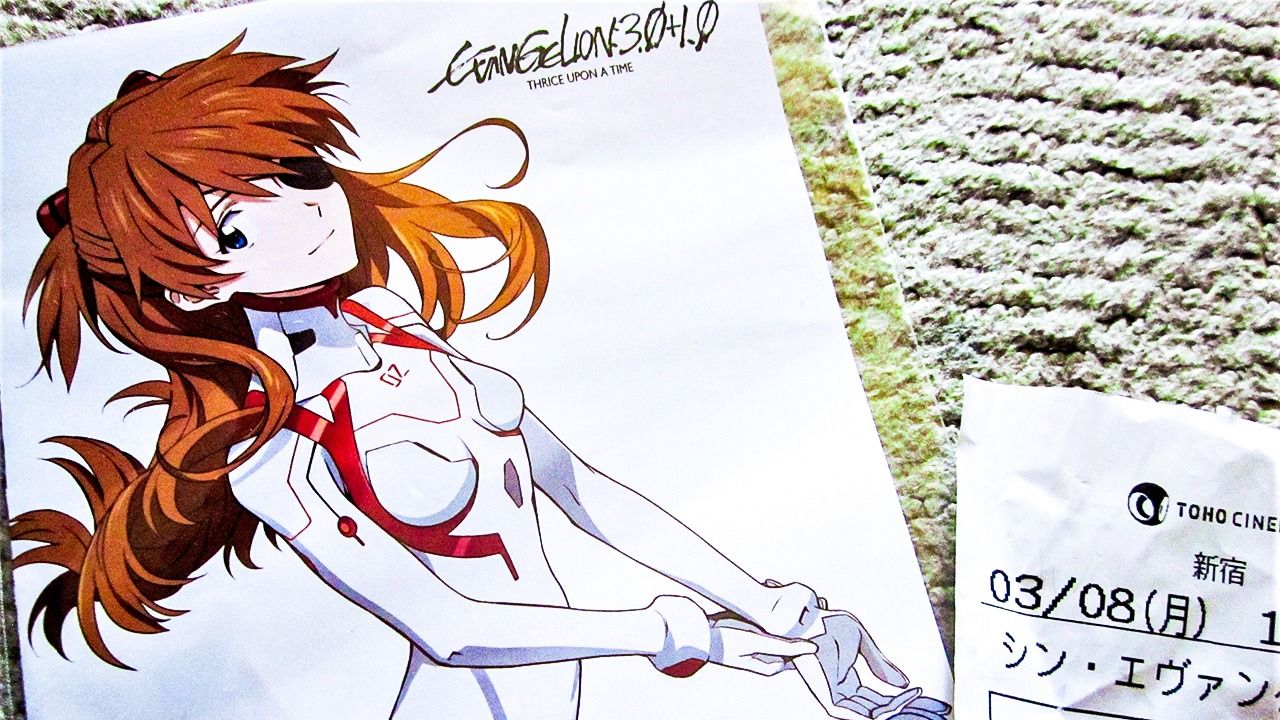 An Ending 14 Years in the Making: What Evangelion’s Latest Says to Today’s Audiences

Anime Manga Society Apr 22, 2021
Evangelion: 3.0+1.0 Thrice Upon a Time, the fourth and final installment of the Rebuild Evangelion film series, is finally in theaters. The Evangelion treatment of serious themes like the need for esteem has helped make the series one of the most recognized works of Japanese animation worldwide. A look at the latest film, which offers a different worldview from the original works.

It has been 14 years since Evangelion: 1.0 You Are (Not) Alone hit theaters in 2007. Counting from the 1995 television series Neon Genesis Evangelion, this marks an end to 26 years of stories.

The plot, in basic terms, is that humanity is rebuilding the world after an unprecedented disaster called the Second Impact. However, they are under constant threat of attack from beings known as Angels, and a group of fourteen-year-olds are tasked with standing against them by piloting giant artificial humanoids called Evangelions. The broad story outline is so well known that even people who are not into the shows know something of it, making it almost a shared social experience in Japan.

Of course, animation itself is a group effort. Director Anno Hideaki and his staff created a world filled with such diverse ideas of what “service” means that, to be honest, many viewers (myself included) were unable to say they truly understood it all at the time of viewing. Indeed, I do not think I can say I have it figured out now.

Let us take, for example, the protagonists and their displays of adolescence and its delicate instability. Ikari Shinji, one of the Evangelion pilots, has lost his mother and feels that his father is utterly uninterested in him. He is motivated by a simple desire for his father to recognize and value him. That desire is something we can discuss today in handy terms like “need for esteem,” but in Japan prior to the 1990s that kind of psychological talk was not common at all.

For example, in 1979’s Mobile Suit Gundam, Amuro Rei defied his superior officer when he felt he was not getting the esteem he deserved. The response was not a moment of care for his delicate sensibilities, it was a savage beating. That kind of internal pain was never sublimated to the level of a main theme, either.

However, in the 1990s Evangelion’s message demanding open-eyed examination of the self/others became more common and resonated not only with younger viewers, but adults as well. Since then, creative works have often centered themes of confusion over identity and its place.

The impact of Evangelion has also changed the position of popular culture in Japan. Economically, Japan has long been a manufacturing-centered country. Even within the cultural sector, the main industries were fashion and music, while manga and anime were outside the mainstream. In fact, they were often considered simply an otaku (obsessive nerd) subculture, and thus slightly embarrassing for average audiences. Director Anno once told an interviewer that when he made the first series, he wanted to make something of which viewers would not be embarrassed to call themselves fans.

Now, of course, this otaku subculture has become totally mainstream. There has been a clear movement away from valuing concrete industries like manufacturing and toward valuing the imagination in the content creation industry. It is no exaggeration to say that Evangelion served as a turning point for that shift.

Industries like manufacturing, the service sector, tourism, and even fashion, which used to keep a wide distance from that subculture, have instead come to rely on the soft power exerted by Evangelion. In 2015, major Japanese fashion designer Yohji Yamamoto even offered a series of pieces using Evangelion designs. 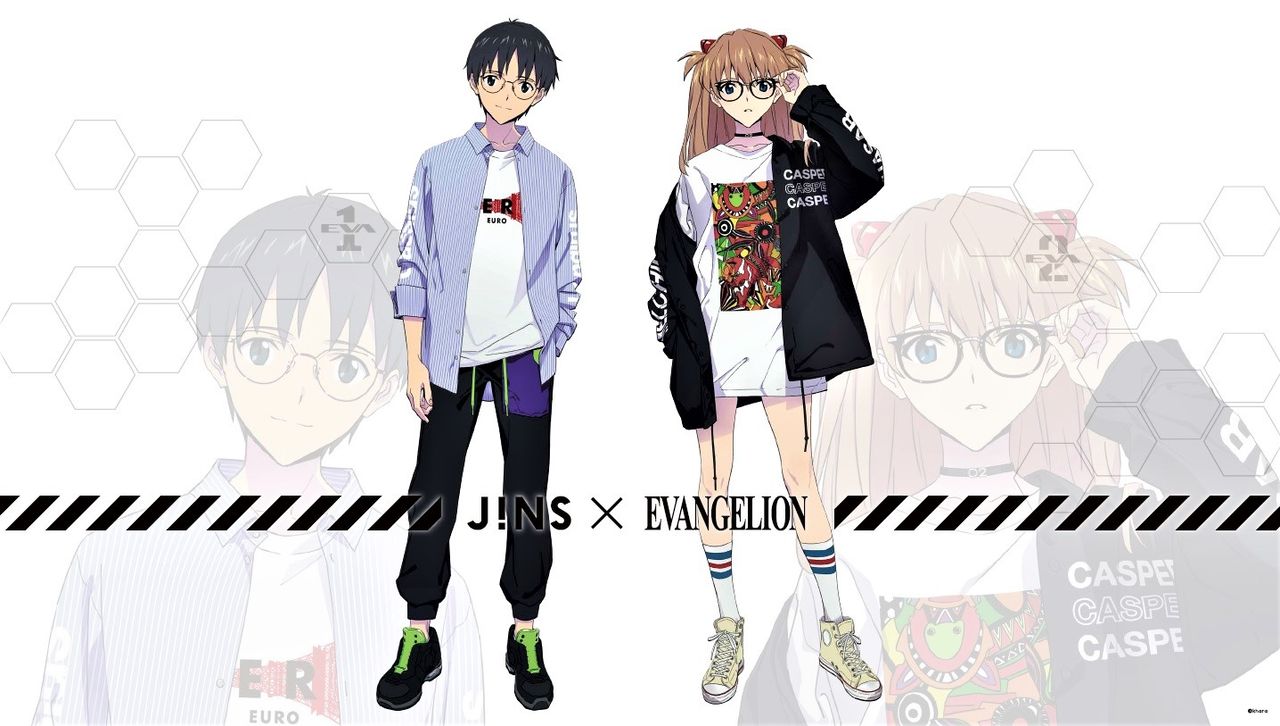 Evangelion shows up in work from all kinds of industries. This illustration features concepts for eyeglasses from the popular brand Jins.

Evangelion has a large store of media. The 1990s featured the television series and two movies, and then the twenty-first century witnessed its revival with still more films. 2007’s Evangelion: 1.0 You Are (Not) Alone seemed at first to follow the original story, but the second installment, Evangelion: 2.0 You Can (Not) Advance, took a sudden turn at the very end.

The third film, the 2012 Evangelion: 3.0 You Can (Not) Redo, astounded audiences by revealing drastic changes in a world set 14 years after the last outing. From the beginning, this series was planned to end with the fourth film. To be perfectly honest, after I saw the third film, I thought it was hopeless. How could they solve all of these mysteries with only one film left?

And then came March 8, 2021. The final piece of the puzzle, Evangelion: 3.0+1.0 Thrice Upon a Time, came out. Its story unfolds in ways that go far beyond any viewer’s expectations. Do we escape into fiction, or confront reality? Do we seek others, or reject them? Do we want to be accepted as adults, or remain children? Do we value the flesh, or the spirit? Follow the calm scent of soil, or the wild smell of the sea? How does humanity find completion? The answers to all of the questions Evangelion has struggled with will be answered, and a way forward revealed.

Of course, Evangelion is the story of a person—one person in particular. Now, the relationship of the seer and the seen are reversed, and the entire circle of this story is closed—not only that of Rebuild of Evangelion, but all of Evangelion. What will we find at the end of all this hope and despair?

It has been 26 years since the television debut, and 14 since the revival in theaters, which is more than enough time for children to grow to adulthood. This film offers a sense that the makers needed all that time to find their own answers, and in the meantime, the audience has also lived through so much. You blink—suddenly years have passed, and you have become an adult. Those same years have passed for Eva. Perhaps the true theme of this monumental work can be summed up in two simple words: growing up.

When I left the theater after Evangelion: 3.0+1.0 Thrice Upon a Time, I was filled with gratitude. Gratitude to Anno for continuing this great work, gratitude that I was able to witness its completion.